Borussia Dortmund were handed an unpleasant surprise as they were defeated 3-1 by Union Berlin. Lucien Favre’s side are tipped to be title favourites and came into the game looking for an easy three points.

However, Urs Fischer’s Union Berlin had different plans and put in a clinical performance to defeat Dortmund thanks to a brace from Marius Bülter and a goal from Sebastian Andersson. Earlier, Paco Alcácer had scored for Dortmund to equalize but could not spur them on to win the game.

This tactical analysis aims to look at the key tactics employed by both sides and how it affected the game. 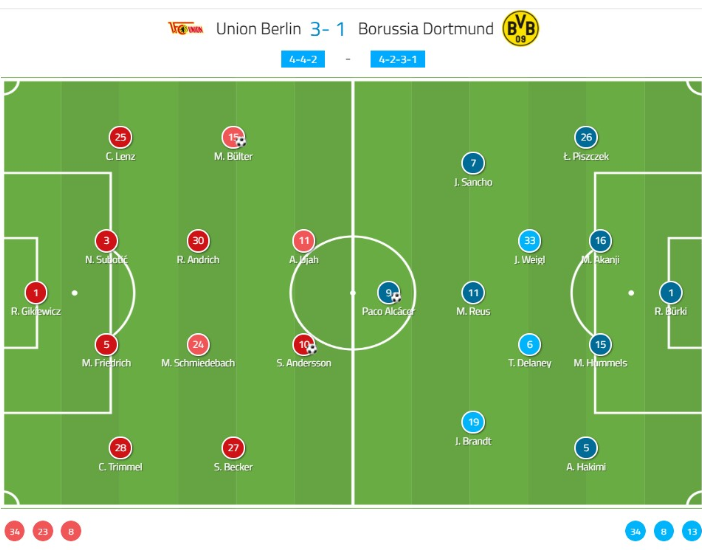 Dortmund lined up in a 4-2-3-1 formation and had a very attacking look to the side. Alcácer led the attack with Julian Brandt and Jadon Sancho on the flanks. Marco Reus started as a number ten. In midfield, Axel Witsel’s absence meant that Julian Weigl was paired with Thomas Delaney. The centre-back pairing of Manuel Akanji and Mats Hummels continued together as Lukasz Piszczek and Achraf Hakimi played on the right and left flank respectively.

Union Berlin opted for a 4-4-2. Anthony Ujah started along with Andersson in attack as Bülter and Sheraldo Becker played out wide. In midfield, Fischer picked the experienced Manuel Schmiedebach along with Robert Andrich. Ex-Dortmund man Neven Subotić started in defence for Berlin along with Marvin Friedrich. Lenz and Trimmel were chosen for the full-back positions.

Dortmund’s predictable use of width

Borussia Dortmund paid the price of their own predictability in this result against Union Berlin. Favre’s heavy reliance on creating chances from the wide areas was picked apart by Berlin. However, this did not mean that Dortmund did not find space or opportunities to cross the ball into the box.

Dortmund’s equalizing goal came from a trademark move which saw Sancho in space out wide and the Englishman whipped in an inviting cross for Alcácer to tap in. Sancho was one of the few Dortmund players who had a decent game and worked hard up and down the flank. There were many crosses played from the right side that Dortmund failed to capitalize on. Despite Alcácer being a constant presence in the box, Dortmund lacked any other presence to support the Spaniard in these areas. This meant that despite some quality crosses by Sancho, these efforts were futile.

Struggles on the left wing

The left side of the attack was the complete opposite. As Julian Brandt no longer operates as a winger, the German began drifting inside which saw him interacting with Reus in the central areas. This left a void on the left wing. Hakimi did not get forward much either meaning that Dortmund were toothless when it came to attacking from the left. Reus and Brandt crowding the middle of the pitch made it difficult to pull defenders out of position, and at one point Sancho and Brandt even swapped wings to bring a greater impetus to the left side.

Union Berlin’s clinical finishing was the cause of their victory. The home side played a 4-4-2 but did not confine themselves to simply defend against the superior opposition. The long balls played forward were well contested by the two physical forwards in Ujah and Andersson. Berlin were also the quickest to the second ball, especially after their forwards won an aerial duel. With Dortmund over-committing themselves, Union Berlin saw the opportunity to hit them on the counter and did so with aplomb. Despite the glamorous attack, Dortmund never really look comfortable enough defensively and this was exposed in this game. Weigl’s pushing forward left Delaney as the only defensive midfielder. Hummels and Akanji did themselves no favours either by trying to over-complicate simple defensive situations.

Bülter and Andersson were the standout players for the home side, not only due to their goals but also their defensive efforts. Bülter himself took his chances well but his statistics depict a very industrious performance. The German lost possession just thrice but also made three dribbles, an interception and tackle. More importantly, he offered defensive protection against Sancho. Similarly, Andersson did a great job of holding up the play, winning four aerial duels and completing four dribbles.

For Berlin’s second goal, Akanji made an error which gave away possession to the opposition in Dortmund’s own half. Roman Bürki did save the one-vs-one, however, with Piszczek committed forward and Dahoud missing, it created a chaotic defensive situation and the ball fell in space for Bülter to fire in. Dortmund were walking a tight-rope when it came to how many players they committed to attack and were aptly punished for their overconfidence.

Union Berlin in many ways did a good job of stifling Dortmund’s attack. While it has to be said that on another day, Dortmund could have scored more goals themselves, Berlin certainly did not give them the freedom and space they hoped to have. Fischer’s side did not sit too deep and invite pressure unnecessarily. Neither did they press extensively given how many press-resistant players Dortmund have. Instead, Berlin picked their moments and looked for the weakness of Dortmund when defending set-pieces and covering space in midfield.

A useful tactic was how they pressured the Dortmund players who could switch the play to the opposite side. When the likes of Hummels or Weigl had the ball, a Berlin forward or midfielder would apply pressure preventing a cross-field pass. This forced the visitors to circulate it through the defence and gave time for Berlin to adjust their formation. By paying attention to these details, Berlin were able to nullify many of Dortmund’s favoured attacking routes and the same is seen in the result itself.

In conclusion, this analysis has shown that Dortmund paid the price of their own complacency against a hard-working Union Berlin side. The Bundesliga season thus far has been quite the show and continues to be so with sides like Berlin punching above their weight. For Dortmund, it was a poor performance all round and Favre’s side will need to introspect and address certain defensive issues if they are to mount a sustained title challenge. Union, on the other hand, are enjoying their start to life in the Bundesliga and combine work-ethic and talent to get results.