Russian players dominated our analysis of the best keepers outside the top five European leagues. However, most of them were already in their peaks or had passed it. One youngster that stood out was 22-year-old Aleksandr Maksimenko. Spartak Moscow had a disappointing season, finishing in seventh place. Maksimenko was one of the few standout performers for the Moscow team.

This tactical analysis will look at why Maksimenko has stood out among his peers this season. It will also outline how he fits into his team’s tactics and whether he would be a good transfer for teams within the top five leagues.

How does Maksimenko compare to the best young goalkeepers?

Maksimenko’s stats suggest that he is one of the most promising young goalkeepers outside Europe’s top five leagues. But how does he compare to the best? The below graph compares how many goals u25 goalkeepers have conceded in relation to the amount that they were expected to concede per 90 minutes. 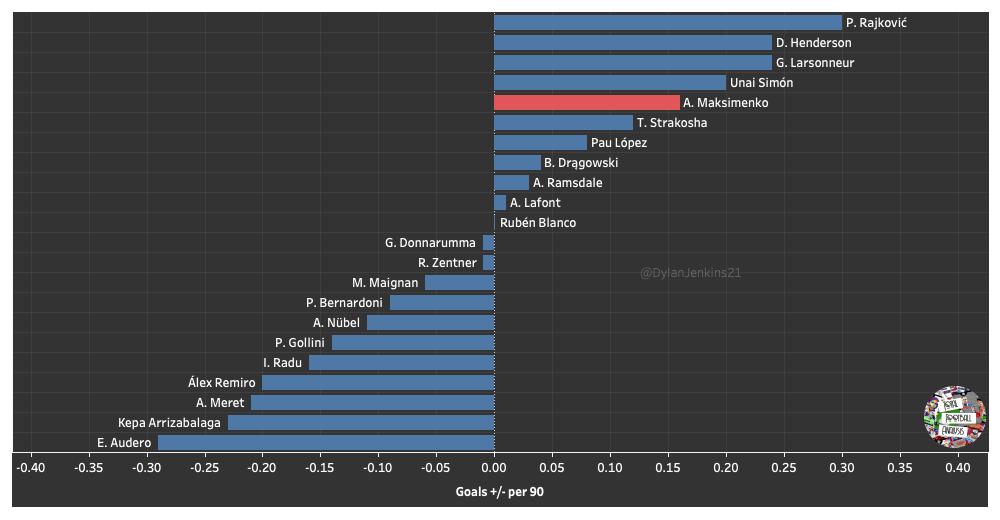 Maksimenko impresses here. He’s amongst the best performing young goalkeepers. The Russian saves 0.16 more goals than he was expected to per 90 minutes, the fifth-best performer. Sheffield United goalkeeper Dean Henderson, on loan from Manchester United, is the second-best performer.

Standing at 1.87 metres tall, Maksimenko is fairly short for a goalkeeper. However, as we’ve seen in the past with former Real Madrid man Iker Casillas and former Barcelona keeper Victor Valdes, height isn’t always an issue for the best goalkeepers. The Russian’s reflexes and anticipation mean that he can use his instincts to save tough shots. 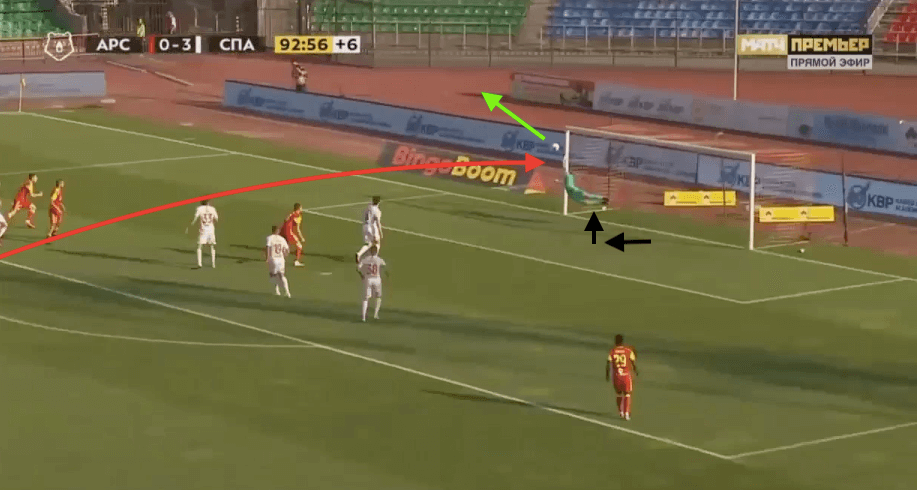 In the example, although the shot is going towards the top corner of the goal, Maksimenko is still able to make the save despite his height disadvantage. The Russian uses his anticipation to identify where he thinks the shot will go, he uses his footwork to scramble across the goal and finally uses his agility to reach the ball. He uses his left (top) hand to reach the ball as his right (bottom) wouldn’t be able to reach it.

Maksimenko ranks as one of the best keepers when compared to players under-25 in the top five European leagues. He has an above-average save % and faces an average amount of shots per 90. 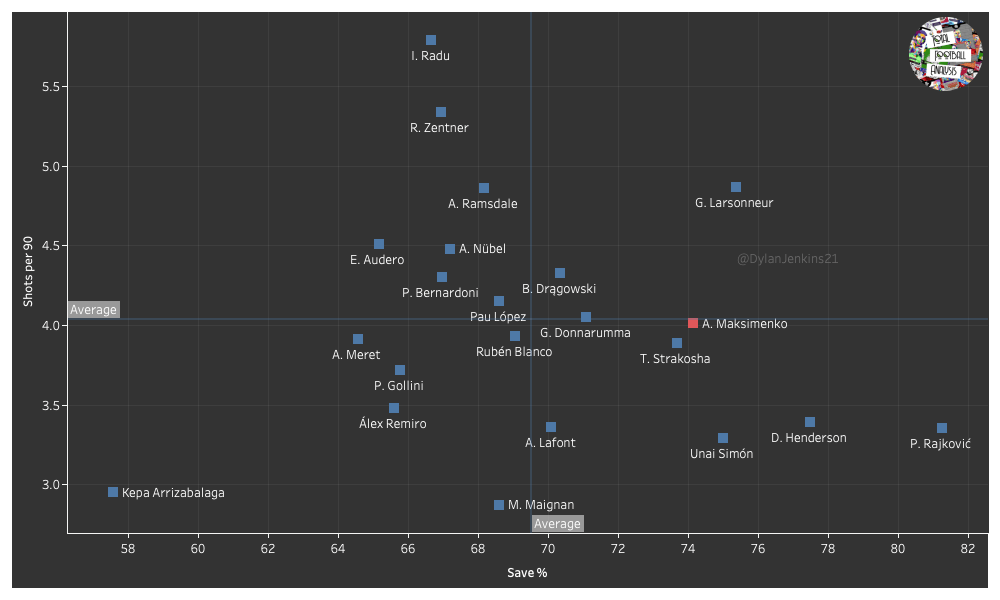 Maksimenko is a very good shot-stopper. Not only does he save difficult shots, but he is very good as holding easier shots, ensuring that he doesn’t parry shots to the opposition. He has a save percentage of 74.14%, making 2.9 saves per 90. 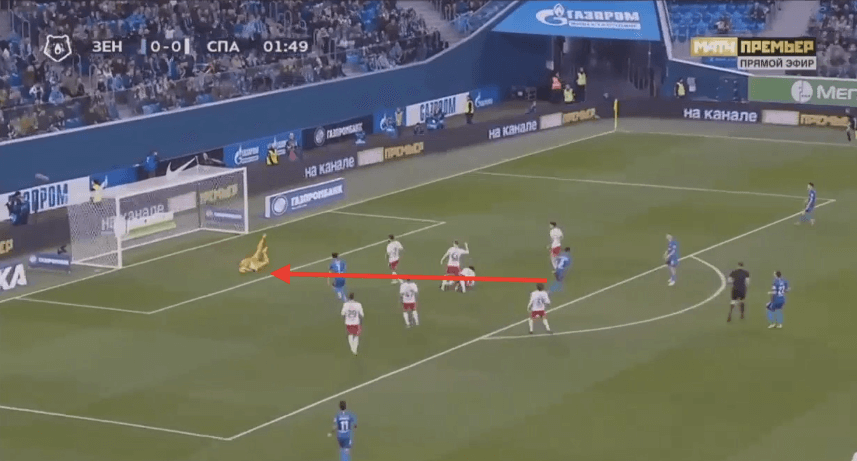 Against Zenit, he showed a good example of his safe hands. He faces a powerful low shot that should be hard to handle. However, Maksimenko knows that if he spills the ball, it will likely rebound straight to a Zenit attacker. Because he’s anticipated where the ball will go, he’s able to get down early and take the ball into his chest.

The 22-year-old is always very aware of his surroundings – he knows when to hold the ball and when he can parry it. In the example below, he knows he can do the latter as there is no immediate danger. 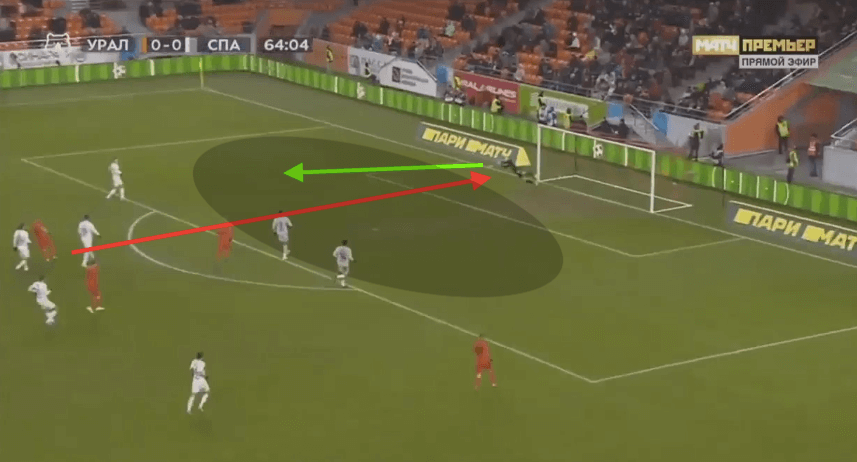 Here, he knows there are no attackers following in on goal. Although the shot is taken from a distance, Maksimenko still can’t hold it. Instead, he palms it in the direction of his unmarked teammate who is then able to bring the ball out from defence. On average he makes 2.8 saves before conceding.

As well as his ability to stop shots, the Russian keeper is very effective at stopping attackers in one-on-one situations from in front of his goal. 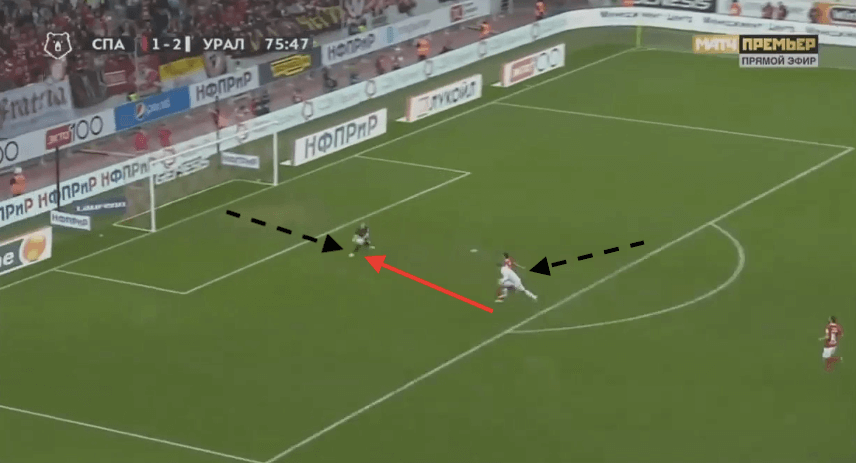 The above image shows an attacker bearing down on Maksimenko’s goal. Dealing with a one-on-one situation from directly in front of your goal can be a difficult task as the striker has a lot of the goal to aim at. The keeper engages the striker but doesn’t commit. If Maksimneko was to commit then the attacker could easily lift the ball over him. He lets his defender get close to him and apply pressure, this leads to the shot being straight at the keeper.

However, the Russian has a tendency to rely on his reflexes rather than engaging his opponents. This can be a problem when a keeper needs to spread himself in situations where it is not humanly impossible to react to a shot. 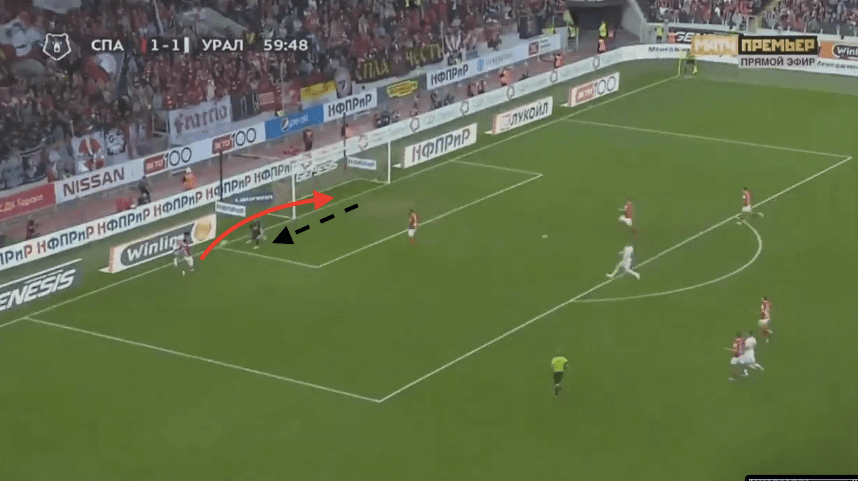 In this instance, Maksimenko gets beaten from almost on the by-line. He should spread himself making himself as big as possible rather than just engaging. But instead, he relies on his reflexes to save the shot.

A similar example is below but from a different area. 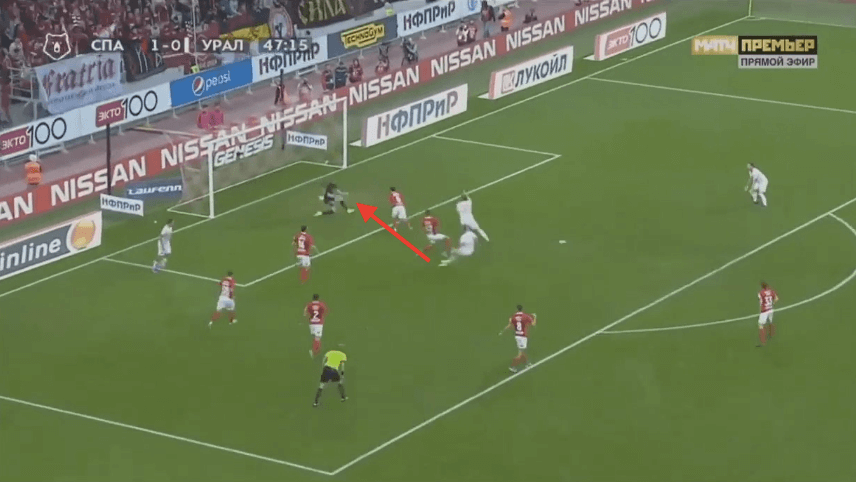 Although this is a much more difficult scenario than the first, Maksimenko should still save it. The ball ends up going underneath the keeper after he tries to react. A better option would be to spread himself as he sees the striker is about the shoot. If he spreads himself instead of blocking the shot he would make himself a bigger target to hit, giving him a better chance of saving the shot.

Maksimenko doesn’t let his age get in the way of his aggressiveness. The 22-year-old is very good at dominating his own box. He has 0.69 exits per 90, which isn’t a lot, but he looks to create an attack every chance he gets. The Russian has an xG Chain of 2.09, which outlines his probability to start counter-attacks.

Here, against Zenit, we see how Maksimenko jumps higher than everyone else to claim the ball. He runs to the edge of his box looking to find a teammate. The keeper prefers to throw short rather than kick long, he’s completed 100% of his throws this season. He throws it over his head into his teammate’s path with plenty of space to run into.

Not only does he like to start counter-attacks after claiming a high ball. He looks to attack as soon as he takes the ball in any situation.

After using his safe hands to catch a shot he immediately sprints to the edge of his box to start an attack. 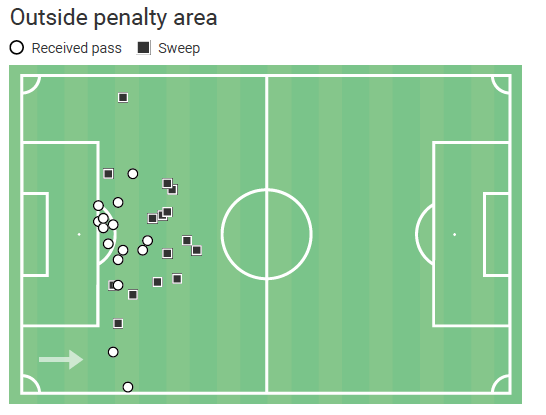 As well as using his aggressiveness to attack, he uses it to help his defence. Although he doesn’t make a habit of sweeping outside his box (1.11 sweeps per 90) he is certainly capable when called upon.

When a ball is played over the top of Spartak’s high line, Maksimenko needs to sweep up to prevent the attacker from getting to the ball first. When sweeping, the Russian likes to find a teammate when he can but is also sensible when there are no options for him. In the above example, Maksimenko is able to head the ball to his teammate, recovering the ball for his team.

Spartak Moscow has the fourth-highest average possession in the Russian premier league with 54.1%, suggesting they prefer to keep the ball and play out of defence – Maksimenko being integral to this. They also have the third-least long passes per 90 with 42.09.

The Russian makes 16.22 passes per 90 and has an average pass length of 30.42 metres, which is the shortest in the league. To put these stats into context, we’ve compared him to other keepers in the league. 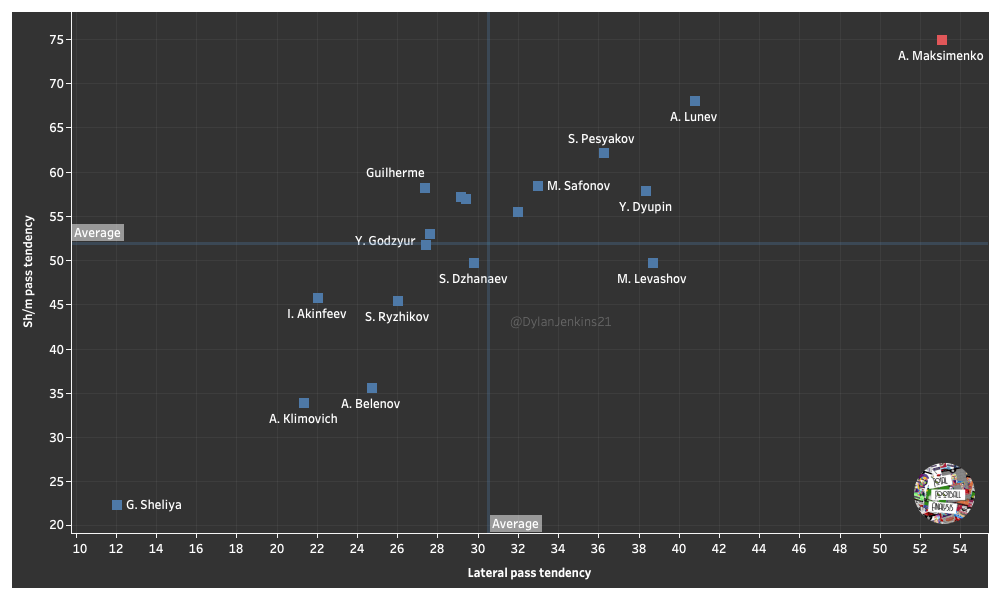 After receiving the ball at his feet, Maksimenko doesn’t look up the pitch. His only intention is to find one of his teammates close to him. Spartak Moscow plays a 3-5-2 formation with the wingers coming into deeper positions when they are in possession. The three defenders ensure that Maksimenko will usually have a short option to pass to.

However, when there isn’t a simple pass available, the Russian is more than capable of completing a hard pass. 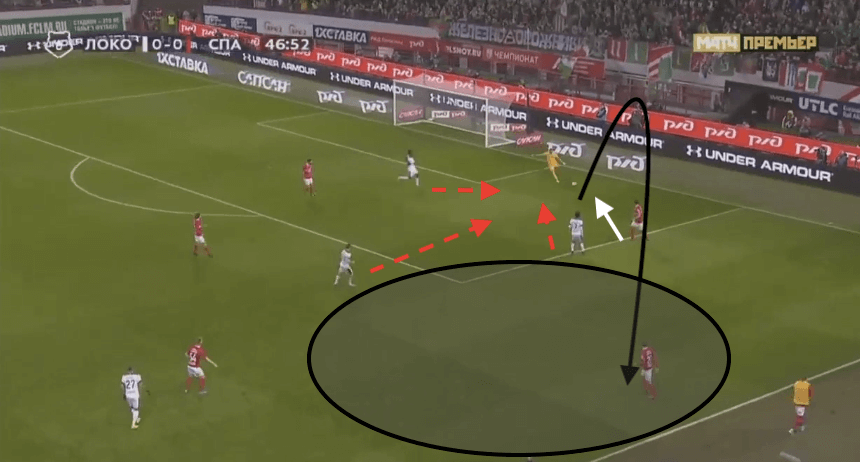 Maksimenko is very sensible with his passing choices. Meaning he won’t force a pass if there’s a chance of the opposition intercepting it. In the above instance, he is being closed down by three opposition players, so there’s no simple pass. But he notices a teammate in the left-back position and intelligently picks him out with a chipped pass. A difficult skill when kicking the ball first time. This example shows his great passing ability and vision.

This scout report has outlined why Maksimenko is one of the most promising young goalkeepers in Europe. The 22-year-old has the playmaking traits that a modern goalkeeper needs. But has the traditional, non-acrobatic traits that many younger keepers don’t possess. With his lack of experience in the top five leagues and European competitions, Maksimenko would be a risk to bigger teams. However, he would be a great transfer target for the future as he does have a lot of potential.