Stadio San Paolo hosted contentious contest between 7th and 8th placed sides in Serie A, with Napoli facing up against Sassuolo. This tactical analysis will break down the game that ended 2-0 to Napoli.

Napoli, led by former AC Milan player and coach, Gennaro Gattuso, have had mixed results recently, losing their last game against Parma, 2-1. Under Gattuso, they have placed less of an emphasis upon keeping possession, but where possible, this is their preferred style of play. Their play is typically dictated down the left flank, with the left-back (Mário Rui or Faouzi Ghoulam) more often than not sending a ball directly to the left-winger (usually Lorenzo Insigne), who will look to combine with the central midfielder to progress the ball into the final third. These tactics were present in this game, as will be analysed later on.

Sassuolo, managed by Roberto De Zerbi, have not won in three-game weeks before this match, but with very little to play for in the league table, motivation must be an issue at this point of the season. Before this game, Sassuolo were eight points behind Napoli, despite being just one place behind them in the league table. The reason behind this gap can generally be pointed towards their leaky defence, conceding 62 goals in 36 Serie A games.  This analysis will take a deeper dive into this game, and Napoli managed to gain the advantage over Sassuolo in this match.

Napoli lined up in a 4-1-4-1 formation, which looked to exploit the pace of their wingers with the use of through balls consistently. The lone striker in this game was Juventus target Arkadiusz Milik, who was supported by Lorenzo Insigne on the left-wing, and José Callejón on the right-wing. Milik’s departure from Napoli has been all but confirmed by Gattuso, and it seems we will see the Polish international play his football elsewhere next season.

Regarding the midfield, Gattuso went with Piotr Zieliński and Fabián Ruiz as the central midfield pivot, with both players having free reign to roam out of position, thanks to Stanislav Lobotka sat in the base of midfield. The back four consisted of Elseid Hysaj, Kalidou Koulibaly, Kostas Manolas, and Giovanni Di Lorenzo, with Portuguese Mário Rui not even making the bench in this game, despite no known injuries. Davide Ospina continues to be the first-choice goalkeeper in recent weeks. 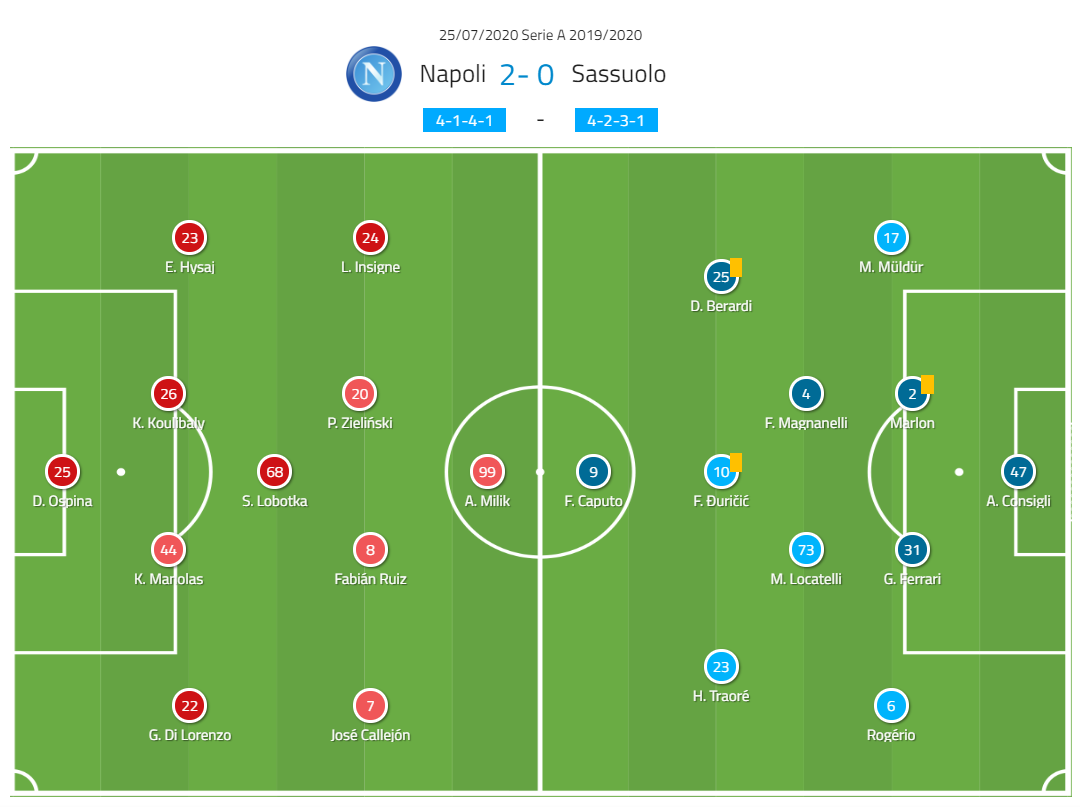 Sassuolo set out in a 4-2-3-1 formation which looked to also favour the wings when attacking and depended on the dribbling abilities of their wingers. The #9 for De Zerbi’s side was Italian veteran Francesco ‘Ciccio’ Caputo, who was assisted by Hamed Junior Traorè on the left-wing, Domenico Berardi on the right-wing, and Filip Đuričić acting as the #10 in this game, where he has done the majority of his best work this season. Jeremie Boga was out of this game due to an injury, although he is also being pursued by Napoli for an ongoing deal with Sassuolo.

The two midfielders in this game were Regista Manuel Locatelli and record appearance holder Francesco Magnanelli, who would look to provide defensive cover. The back four consisted of Rogério, Gian Marco Ferrari, Marlon, and Mert Müldür, with Jeremy Toljan missing out on a starting berth due to a minor injury. Andrea Consigli remained as Sassuolo’s first-choice goalkeeper.

Gattuso’s side begun their attacking plays down the wings, and when they entered the final third, they would look to cut inside and attack down the core. It took them roughly 20 minutes to warm up into the game, but after that their attacking play was fluid and they typically found an opportunity whenever they took possession of the ball. Possession was split pretty evenly throughout the 90 minutes, with Napoli holding 51% of the ball and being the dominant side in this match.

In this game, Napoli found it straightforward to find pockets of space in the final third to either dribble toward or place a pass in the half-space. Sassuolo visibly struggled to defend some of Napoli’s more agile forwards, as they were generally found quite static in their defensive efforts. Their press in this game was weak and was easily bypassed by just a few passes via Gattuso’s side, with Zieliński and Lobotka particularly having a field day with their passing ventures.

As mentioned earlier, Napoli’s central midfielders enjoyed a lot of freedom in this match, despite a lot of the team’s play focused down the left-wing, the team would progress in the midfield down the centre via the likes of Zieliński and Lobotka.

This would be especially effective after Sassuolo had an attack of their own broken down, they have pushed men forward, and they are having to backpedal at pace. Zieliński had a particularly effective game in progressing the ball forward, as will be analysed later on.

In this game, Napoli looked like a solid unit as a team, which is where you can see Gattuso bring his value to the club, while also remaining fluid in an attack like we saw with some of these players under Maurizio Sarri. Under Gattuso, we have seldom seen Napoli look fragile as a defensive unit, and although they got lucky on a couple of occasions this game with offside calls (because they were in a vulnerable defensive position), they fully deserved the goals they scored. On a good day, we could have seen them score a couple more too.

Although Sassuolo under De Zerbi are known to be a competent attacking force, they struggled to create much of any real value in this game. When they did, they were caught offside. In this match, Sassuolo put the ball into the back of the net on four occasions, with all three of them overturned by VAR, and the other one called for offside immediately. Similar to Napoli, De Zerbi’s men looked to utilise the strengths of their wide men and attack down the flanks. 21 of their 24 attacks came through the wings, but they struggled to make much of any of these opportunities.

Down the centre, was where they found their best goalscoring opportunity though, and if it were not for Napoli’s strong offside trap, Sassuolo would have brought the game level. Berardi and Traorè combine well in the final third to drag the attention of numerous Napoli defenders to their location and free up space for some of their forwards. Though, in this game, they missed Boga’s directness with his dribbling at times.

In this match, Sassuolo just struggled to create chances outside of longshot opportunities. They have often relied upon Boga’s brilliance to create something out of nothing, and it was missing in this game. They did not have a player in this game who was willing to take on their man directly consistently. Nonetheless, if their runs were timed slightly better, they would have scored at least a couple goals in this match.

A lot of attention has been placed upon Fabián Ruiz this season, and rightly so, as he has been excellent for Napoli this term. Someone who is also worthy of credit, is his midfield partner, Piotr Zieliński. His ball progression has been elite in Serie A, while he has also provided a competent number of goal contributions as well. He has completed 8.31 passes into the final third, 3.6 open-play shot-creating actions, and 1.27 dribbles per 90, to make for a dynamic progressive midfielder.

In this game, he was the typically the man who provided the attacking impetus and began a lot of Napoli’s attacking plays. Taking the game into his own hands, he completed three dribbles, eight passes into the final third, and four-shot assists to make for a really impressive showing. His decision making to lay-off the ball to the right player was on point in this game.

Ultimately, Napoli put in the more complete performance in this match, and they can consider themselves worthy victors. Expected Goals would agree with that sentiment, with Napoli’s chances valued at 2.18 xG in comparison to Sassuolo’s 0.52 xG.

Gattuso should be pleased with his team’s performances, as they subjected Sassuolo to largely long-shots. Although, they will not fulfil their offside trap needs in every single game they play, so perhaps they should consider a different approach to their defensive line. Despite Hysaj having a good game in this match, Gattuso should use Rui more often, as he has been an excellent option for them at left-back whenever chosen.

De Zerbi should continue to be concerned with his side’s defensive fragilities. Though Napoli are a superior team in Serie A, the way they frequently give up chances in defence is not promising for their prospects. Without Boga, as mentioned, they are missing a creative spark and directness which is sometimes required to break down a rigid defence.