Portuguese side Braga will take a 1-0 lead with them to Russia after a convincing victory at home to Spartak Moscow in the first leg of this Europa League qualification play-off.

The Portuguese side looked good for their win and in this tactical analysis we will discuss the tactics behind their performance and analyse how they managed to stifle Spartak Moscow’s game plan using aggressive pressing. 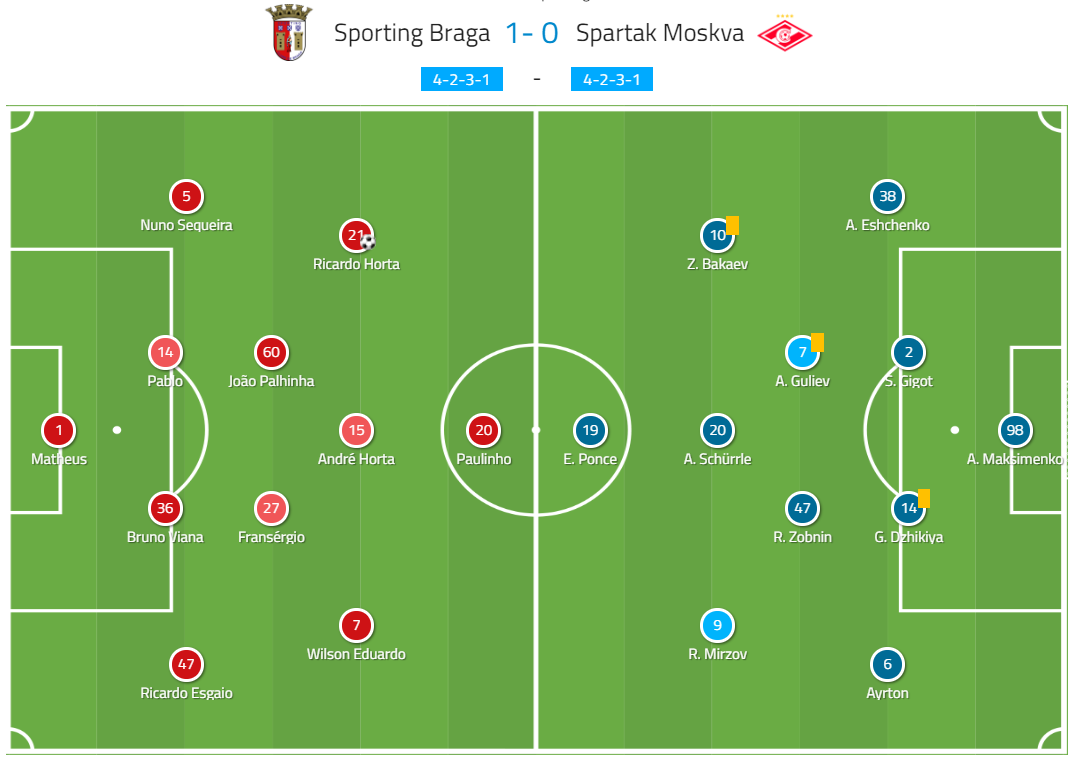 Braga coach Ricardo Sá Pinto made two changes from last weekend’s league defeat to Sporting, with Paulinho returning up front and João Palhinha being chosen for a central midfield role.

Visitors Spartak also lined up in a 4-2-3-1 formation with Ezequiel Ponce starting up front after having been unavailable for the derby victory over CSKA Moscow on Monday evening. The only other change was the introduction of Reziuan Mirzov on the left flank in place of Jordan Larsson.

Despite the home side having only just started their league season, they came out of the blocks with bags of energy as they looked to implement a counter-press. The Portuguese looked to recover the ball as quickly as possible with several players aggressively closing down the man on the ball.

This approach helped Braga assert their dominance on the game as they looked to have the majority of possession and snuff out any Spartak attacks before they could begin.

Their press was particularly effective in wide areas. As you might expect, an opposition player on the wing has fewer passing options available, which in turn makes him more vulnerable to aggressive pressing.

In these next images, we will see an example of how Braga pressed so well down the flanks.

In the above image we see how Spartak Moscow‘s number 10, Zelimkhan Bekaev is forced into using the only passing lane available to him as he plays the ball inside to his teammate, Román Zobnin. From this image, you would think that Zobnin would then be able to play a simple forwards pass to André Schürrle who is positioned just ahead of him. But as can be seen from this next image, Braga had other ideas.

As the Braga players close in it is Braga’s Fransérgio who appears on Zobnin’s blindside to win the ball back for the home side. Fransérgio can be spotted standing close to the referee in the first picture.

As will be discussed in more detail later on, Braga’s pressing was a key feature to this match and set the tone for the game’s tempo as well as dictating how Spartak would play with the ball. For the time being, however, let us now take a look at how Braga looked to attack with the ball.

Spartak’s 4-2-3-1 morphed into a narrow 4-4-2 without the ball, and Braga set out to make full use of the width of the pitch in order to exploit the spaces left open on the flanks. Their main outlet was their left-back Nuno Sequeira. The Portuguese full-back was able to receive the ball in plenty of space due to the way Braga played the ball out from the back.

As the above image shows, Braga would play out from the back by having a midfielder drop in between the two centre-backs. This would give them a numerical advantage over Spartak’s front two and allow the full-backs, such as Sequeira, to push forward.

Spartak’s narrow shape meant that Braga could use this space to progress the ball, yet Spartak showed no attempt to correct it. And as Braga took more and more control of the game (they finished with 58.5% possession), the gaps on the flanks increasingly led to chances for Braga.

The Russian side would eventually pay the price for affording Braga too much space on the flanks as they went behind in the 74th minute.

Here right-back Ricardo Esgaio has found himself in acres of space down the right-hand side, and this time Spartak wouldn’t get away with it as Esgaio’s cut-back found Ricardo Horta at the far post.

What did Spartak do with the ball?

As mentioned above, Braga dominated possession in this match and Spartak only had the ball 41.5% of the time. When the Russian side did try to attack their opponents they were constantly harried by Braga as they found it difficult to cope with the aggressive press.

Braga’s pressing led to lots of mistakes for Spartak. This was because even when the press wasn’t successful in winning the ball back, it did enough to hurry Spartak and force them into playing hopeful direct balls for the forwards to run onto as we shall see in this next image.

Here we see Spartak’s Brazilian left-back Ayrton playing a lofted ball into the path of substitute Lorenzo Melgarejo, which Braga dealt with easily.

What is interesting here is the man-to-man pressing implemented by Braga that has obliged Ayrton to play it long. Melgarejo could have come deep into the empty space highlighted in blue, but since Ayrton was so tightly marked by Braga captain Eduardo, he had no way of getting the ball to him along the ground so this was not an option.

In the above example, after twisting and turning in all directions looking for a teammate to pass to, Ayrton sees his hopeless long-ball go straight out of play for a throw-in to Braga.

This was a prime example of how Spartak failed to find a way to play around Braga’s press. They were unimaginative in their build-up play with very little off-the-ball movement and this made it easy for Braga to simply press them man-to-man.

For these reasons Spartak’s attacks never really got off the ground, hence their 0.33 xG rating.

As we can see from the above diagram, practically all of Spartak’s attempts on goal were from long range as they failed to get bodies forward to support striker Ezequiel Ponce. To the Argentine’s credit, he did hold the ball up well and looked a threat every time he had the ball, but Spartak just couldn’t get forward in enough numbers to make the most of his talents.

Braga fans will be delighted with the way their team not only won but thoroughly outplayed the opposition. As we have seen in this analysis, the home side made intelligent use of the full width of the pitch on the ball and were intense in their desire to win the ball back when possession was lost.

Spartak, on the other hand, cannot be at all pleased with their performance, although a 1-0 defeat is not a complete disaster with a return leg at the Otkritie Arena still to come. The onus now will be on coach Oleg Kononov to find solutions to the heavy press that caused them so many problems as it is vital that they find a way to create more chances in the second leg if they are to have any chance of progressing to the Europa League group stage.