One of the greatest fears of the fans of Bayern Munich was that they wouldn’t be able to find someone who could replace their legend Philipp Lahm in the right-back position. Besides, Jogi Löw maybe thought that he would have the exact same problem in the German national team. However, Bayern, as well as the national team, now don’t have to worry about that position since Joshua Kimmich is currently surely among the best three right-backs in world football.

This tactical analysis in the form of a scout report will look at Kimmich’s abilities, examine why he’s so important for Niko Kovač’s team and discuss in which position the German will play in the next years.

When the 24-years-old Kimmich joined Germany’s most successful club in 2015 he was a central midfielder. Although, during the last two seasons he mainly played as right-back since Lahm retired in 2017, and then Rafinha was the only right-back in Bayern’s squad who wasn’t able to play each week on the highest level anymore. In light of this, Kimmich was their new right-back.

In the 2018/19 campaign, the German was the only player of Bayern who played every single minute in the Bundesliga. In 30 matches he was the right-back and in the remaining four games he played in the central midfield and Rafinha replaced him in the full-back position.

The image below shows us his heatmap for these 34 games in the Bundesliga. It’s a quite typical heatmap for a modern full-back of a top team like Bayern which usually dominate their games and have more possession than their opposition. Mainly providing width and position on the wing to stretch the opposition or create a passing lane. However, since he’s an educated central midfielder Kimmich also likes to shift in a few feet.

Kimmich usually positions wide while the two centre-backs and the defensive midfielder, who is mostly Thiago, are responsible for the build-up. His positioning is similar to Bayern’s left-back David Alaba who also likes to position near the touchline. Due to that, they either stretch the opposition or if they stay narrow, the full-backs are easy passing options for their teammates as you can see in the image below.

But we also have to mention, that the full-backs and wingers are very essential for Bayern’s tactics. They usually try to break through over the wings from where they try to find Robert Lewandowski, the opposing winger who joined the Pole in the centre or a central midfielder who pushed forward. In light of this, the players in the wide areas must always try to create passing lanes.

Kimmich is without any question an incredible football player but one of his greatest strengths is his intelligence and understanding of the game. However, it’s hard to measure these attributes but when you look at Kimmich it especially gets visible in his positioning. Since Bayern usually dominate the game with the aid of possession, their opponents often sit back and defend in a low block. In these situations, Kimmich tries to position a bit deeper to be outside the opposition’s block. Due to that, he gifts himself more time when he receives the ball and it’s easier for him to make a decision.

Exactly that is shown in the example below. The right-back receives a pass and is positioned a bit deeper outside the block of the opposition. He has got the time and vision to play a good through pass to Leon Goretzka who scores.

Crossing as the lethal weapon

One of Kimmich’s greatest strengths is his crossing. He assisted last season in 34 appearances in the Bundesliga amazing 14 times. Ten out of this 14 assists were either crosses or corners. However, the German right-back has got teammates who are great in the air like Lewandowski, Thomas Müller or Goretzka.

Although it seems like he always chooses the right type of cross. He can deliver low powerful crosses as well as high crosses with a lot of swerving. Although, it’s one point to be able to deliver the right sort of cross, but you also have to have the vision and right decision-making, both of which Kimmich has as we see in the example below.

When you compare his crossing ability with the two other most valuable right-backs in world football, Alexander-Arnold and João Cancelo, you can see that those three are on the same level. All three players are pure world-class when it comes to the delivery of crosses. Kimmich crossed on average last season least often (3.67 per game) compared to Cancelo’s 4.81 and Alexander-Arnold’s 5.14. However, his success rate is between the other two players. On average 31.8% of the German’s crosses found a teammate in the middle. Manchester City’s new signing Cancelo, on the other hand, had got an amazing success rate of 42% last season and Jürgen Klopp’s right-back has got a slightly lower value than Kimmich with 31.1%.

You have to consider that even though he hasn’t got the highest values in this comparison, he’s still world-class when it comes to crosses since all three of them are among the best in world football and have astonishing stats.

In the example image below, he proves exactly that. Kimmich delivers a low cross to find Kingsley Coman since the two defenders in the centre concentrate on the front post where Lewandowski tries to position himself. 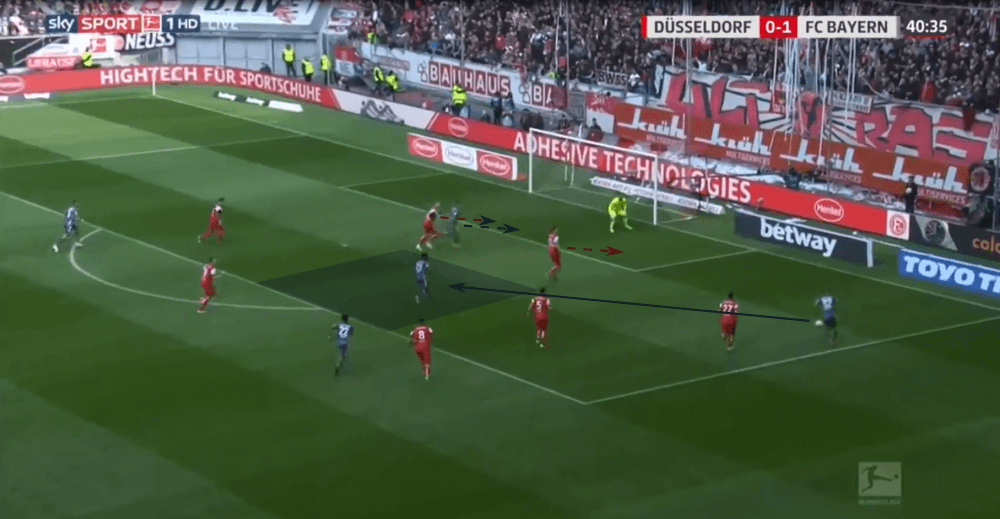 Besides, the 24-years-old is also able to deliver good crosses with his weak foot. As you would expect, his strong foot is as usual for a right-back, his right foot. Although, Kimmich can also cross with his weak left foot as the example below shows us. It’s not a typical cross but still proves that he’s able to play a precise cross or long ball with his weak foot. 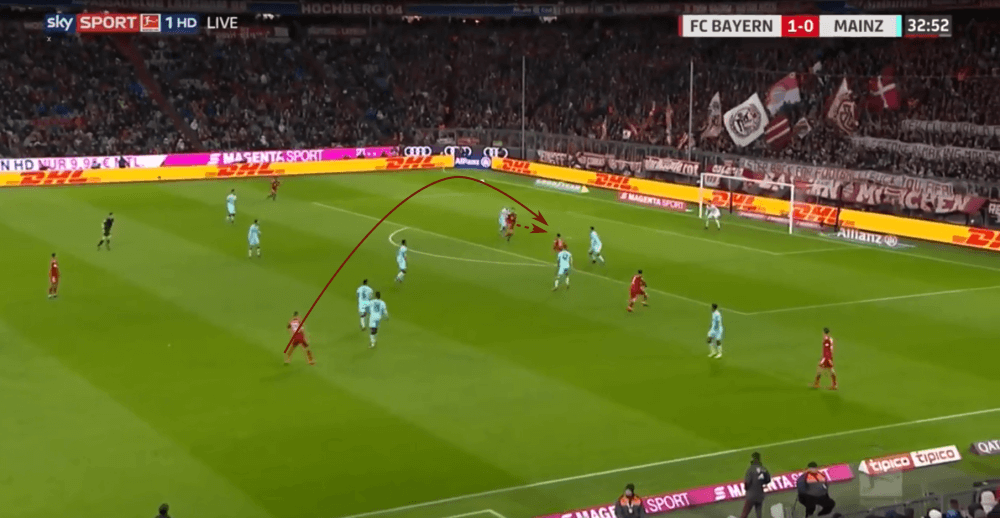 Even though full-backs are nowadays an important part of the offensive concepts of their teams, they are still part of the back four and in light of this should be able to win defensive duels. Kimmich exactly combines offensive and defensive abilities.

Besides his quality to win defensive one-on-one situations, there are two factors which make it so hard for a defender to get past him. He combines calmness and aggressivity as we will see in the examples below.

Firstly, calmness and patience are extremely important for a defender. They need to have a good body-positioning and then wait until they have the opportunity to touch the ball. In the image below, Kimmich stands quite straddle-legged to quickly react when his opponent tries to change the direction. He stays calm since there’s no need to try a tackle because his opponent isn’t in a dangerous area. 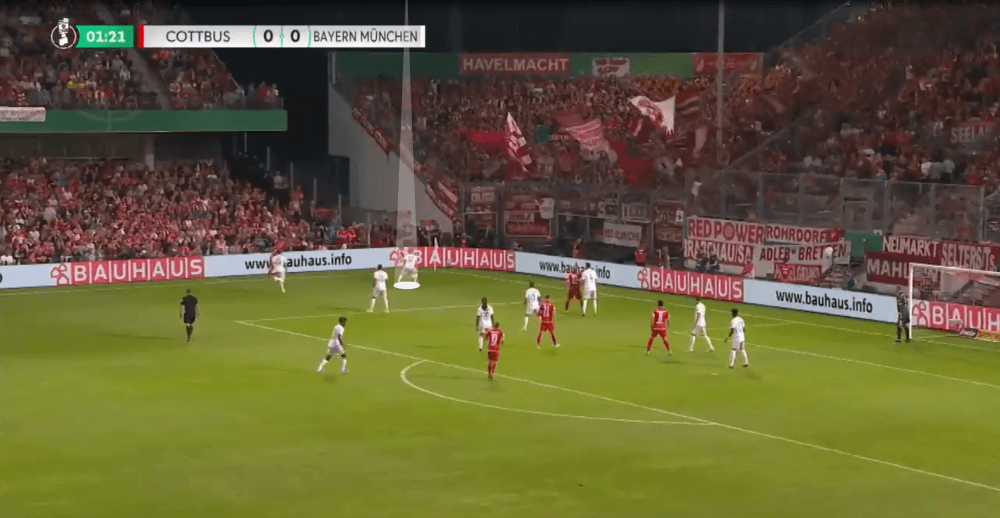 In the second example, Kimmich’s unbelievable aggressivity and will which appear as soon as he steps onto the pitch get visible. He tries to tackle in a crucial position against his opponent Sadio Mané and clears the ball over the end-line. This tackle is very important at this moment because if Kimmich isn’t able to win the defensive duel, Mané could create a goalscoring opportunity.

As soon as the ball went over the end-line he celebrates his tackle like a goal and screams into Mané’s face. Of course, he does that to intimidate his opponent but it’s also a great and positive example for his incredible aggressivity. 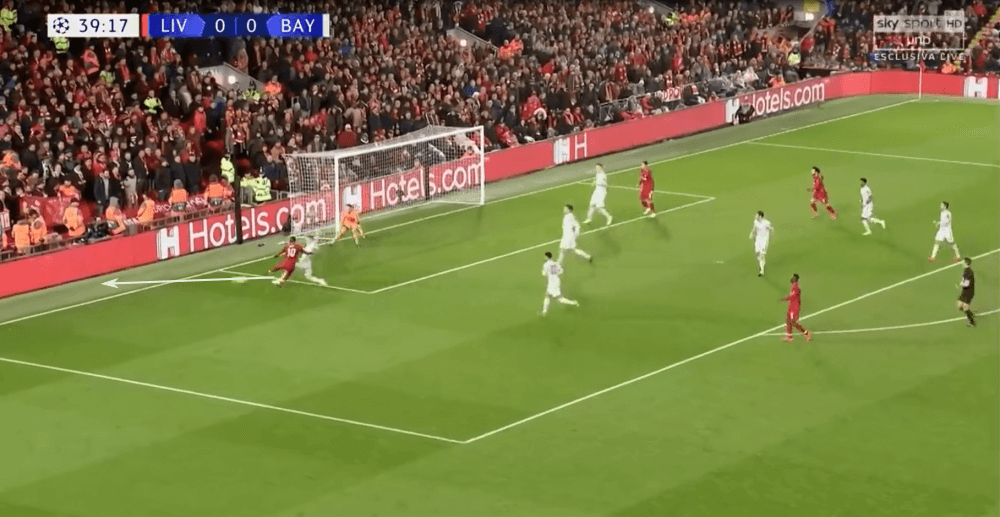 As already mentioned in this analysis, Kimmich was a central midfielder during his youth career and also at the beginning of his senior career. However, because of the retirement of Lahm and the lack of alternatives, he had to play as a right-back at Bayern. The 24-years-old played so well that he stayed in that position and is now among the best right-backs in the world.

However, in recent games, Löw lined the German national team up in 3-4-3 with Kimmich alongside Toni Kroos in the central midfield. Since Bayern bought this summer Benjamin Pavard who can play as a right-back the chances aren’t too bad that Kimmich could also play as a central midfielder in some games for Bayern but there’s just one problem: Thiago.

The Spaniard is one of the most important players for Bayern and their central man for their build-up. He’s Kovač’s first choice for the defensive midfielder in his 4-3-3. However, maybe he’ll try to let Kimmich start as the right central midfielder, Pavard as his replacement as a right-back and so Thiago could stay in his position.

It’s undeniable that Kimmich has got the qualities to play as a central midfielder. The German is a good passer of the ball as his success rate of 88.7% during last season in the Bundesliga shows. Furthermore, he can play penetrating through balls as you can see in this example below.

Besides, the 24-years-old is able to solve situations in which the opponents try to press in at him and put pressure on him. This once more shows his calmness and vision. He almost always tries to solve these situations with his create technique as shown in the example below. Of course, he’s not as strong as Thiago on the ball but still most of the time able to find a solution under pressure. 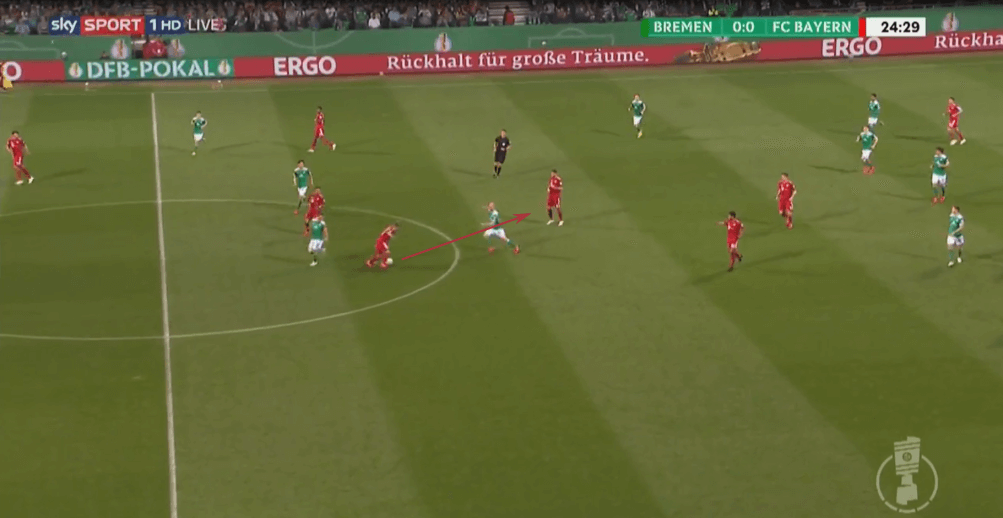 As this scout report showed, Kimmich has got the abilities to play as a central midfielder but also learned within the last few years how to be a good right-back. He’s strong in the defensive duels and can deliver great crosses. In addition, he’s confident with the ball at his feet and so he has got the three main qualities which a full-buck should have in Kovač’s current system.

However, it’s not unlikely that we will see him this season more often in the central midfield compared to the last campaign when he made just four appearances in the Bundesliga as central midfield.

It will be interesting to watch how often Pavard will play as a right-back and how he performs since this is an important factor which influences where Kimmich will play.