Goalkeepers are becoming more and more important to a team’s tactics in the modern game. Finding the right keeper is integral to a team’s success, and some teams have struggled with this over recent seasons. Manchester City have recently found an incredible acquisition in Ederson after Claudio Bravo and Joe Hart failed to convince Pep Guardiola. Ederson’s incredible rise outlines the importance of scouting for keepers outside the top five European leagues, as he came from Benfica.

This data analysis will look at the best performing goalkeepers from outside the top five leagues, but still focusing on the better leagues. This analysis will consider the top divisions from Russia, Portugal, Belgium, Holland, and Turkey, as well as the English championship. We will consider their passing, sweeping, and shot-stopping abilities, creating a top three to conclude.

Playing outside the top five European leagues will often mean playing behind a weaker defence. Although the same could be said about attacking players, goalkeepers will be exposed to more shots that vary in difficulty. We will use statistics that we can compare against their defences and the number of goals they are expected to concede. Janis Blaswich and Yury Dyupin impress the most as they are furthest above the line. Blaswich is expected to concede 1.56 goals per 90 but only concedes 1.22. The German has enjoyed a great season with Heracles in the Eredivisie. Dyupin of Rubin Kazan has also had an impressive season. In a rather weak team, he only concedes 0.98 goals per 90, when he was expected to concede 1.33.

Galatasaray veteran Fernando Muslera has enjoyed his best season in a while. The Uruguayan has conceded the least amount of goals in Turkey this season, and given his team’s fourth-place position, this is very impressive. He is expected to concede 1.04 goals per 90, but incredibly only concedes 0.69.

In a disappointing season for Anderlecht, goalkeeper Hendrik Van Crombrugge has been one of the few positives. The Belgian only concedes one goal per 90, but he is expected to concede 1.21 per 90.

The youngest of the best performers on this graph is 22-year-old Aleksandr Maksimenko. The Spartak Moscow youth product has had a huge influence on his team’s defence. He’s conceded 0.93 goals per 90 this season. His team’s weak defence means he’s expected to concede 1.25 per 90.

The next graph will compare each keeper’s ability to save shots and how many shots they face. 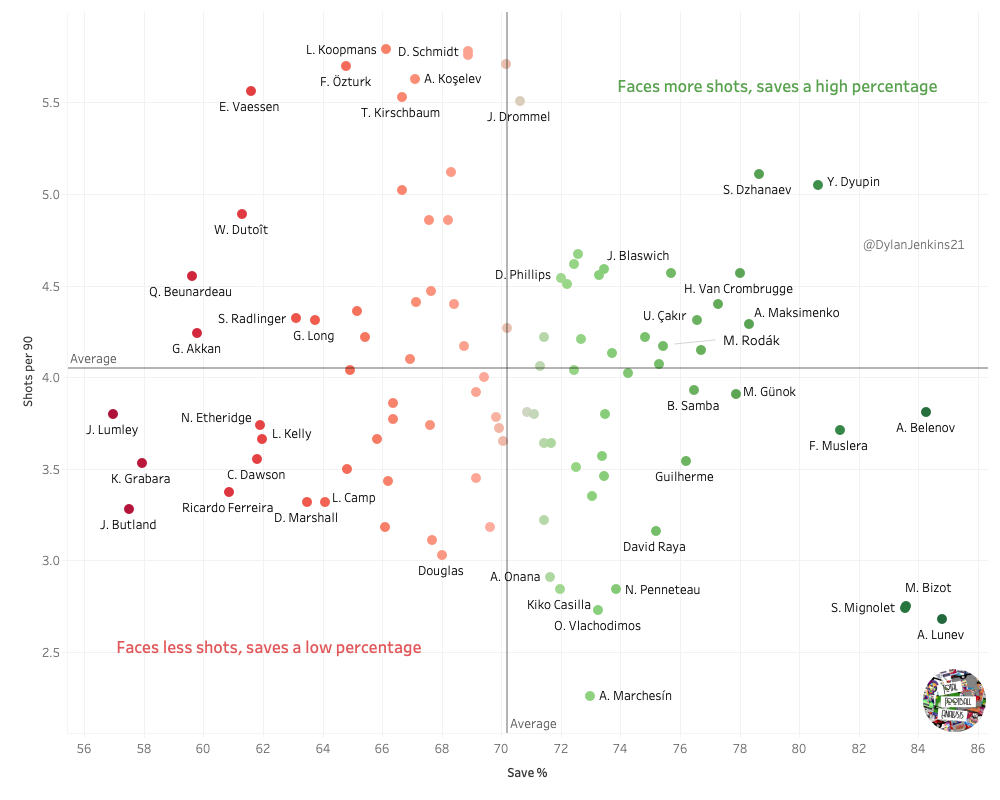 Aleksandr Belenov and Muslera show up with very good save percentages, with 84.27% and 81.37% respectively.

Zenit keeper Andrey Lunev has the best save percentage with 84.78%. The 28-year-old has had a great season with the Russian giants, conceding only 12 goals in 25 games.

Dyupin and Sochi’s Soslan Dzhanaev both face a high number of shots and save a high percentage of these. Dyupin has performed the best, facing 5.05 shots per 90 saving 80.62% of these. Whilst Dzhanaev saves 78.62% of his 5.11 shots per 90.

Maksimenko and Uğurcan Çakir both appear in the top right quadrant. Both face around 4.3 shots per 90, Çakir saves 76.56% with Maksimenko saving 78.30%.

The below graph shows each goalkeeper’s passing tendencies, these stats will often reflect their team’s style. Players towards the bottom right of the graph tend to pass short, whilst those towards the top right have a mixed range of passing. 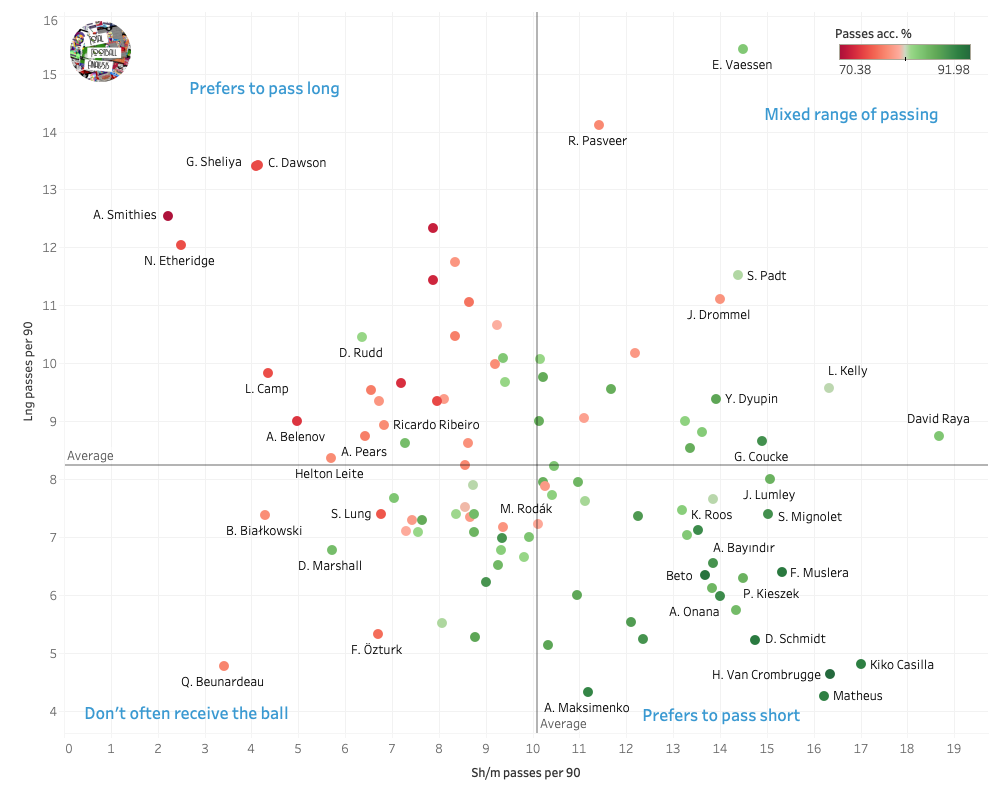 Notable names in the bottom right quadrant include Ajax’s André Onana, Leeds shot-stopper Kiko Casilla, and the previously mentioned Maksimenko. The former makes the second-least amount of long passes with 4.33 per 90, instead, he prefers to pass short/medium, making 11.18 per 90.

Brentford’s David Raya is the most interesting player on this graph. The 24-year-old Spaniard has the most short/medium passes out of all players in the sample with 18.63. However, he appears towards the top right of the graph, meaning he has a mixed range of passing. He averages 8.75 long passes per 90. He has an overall pass completion rate of 83.81%.

The below graph analysis shows each goalkeeper’s exits per 90 and interceptions per 90. Players in the top right quadrant are more likely to ‘sweep up’ behind their defence, whilst those in the bottom left are less comfortable leaving their line and box. Previously mentioned David Raya and Dyupin both have ‘sweeping’ tendencies. The Brentford man has won 96.55% of aerial duels whilst making 2.38 exits and 2.5 interceptions per 90. The veteran Dyuping averages 2.03 interceptions and 2.54 exits per 90.

Maksimenko and Cardiff City’s Alex Smithies both prefer to stay near their line. As mentioned previously, this may be because their teams are more defensive. Spartak Moscow and Cardiff both play rather deep defensive lines, this means that there isn’t a need to ‘sweep up’.

Which goalkeepers have outperformed expectations

The graph below uses a metric of xG +/-. This metric is calculated by taking away their actual goals conceded from their expected goals conceded – giving us a plus/minus result. 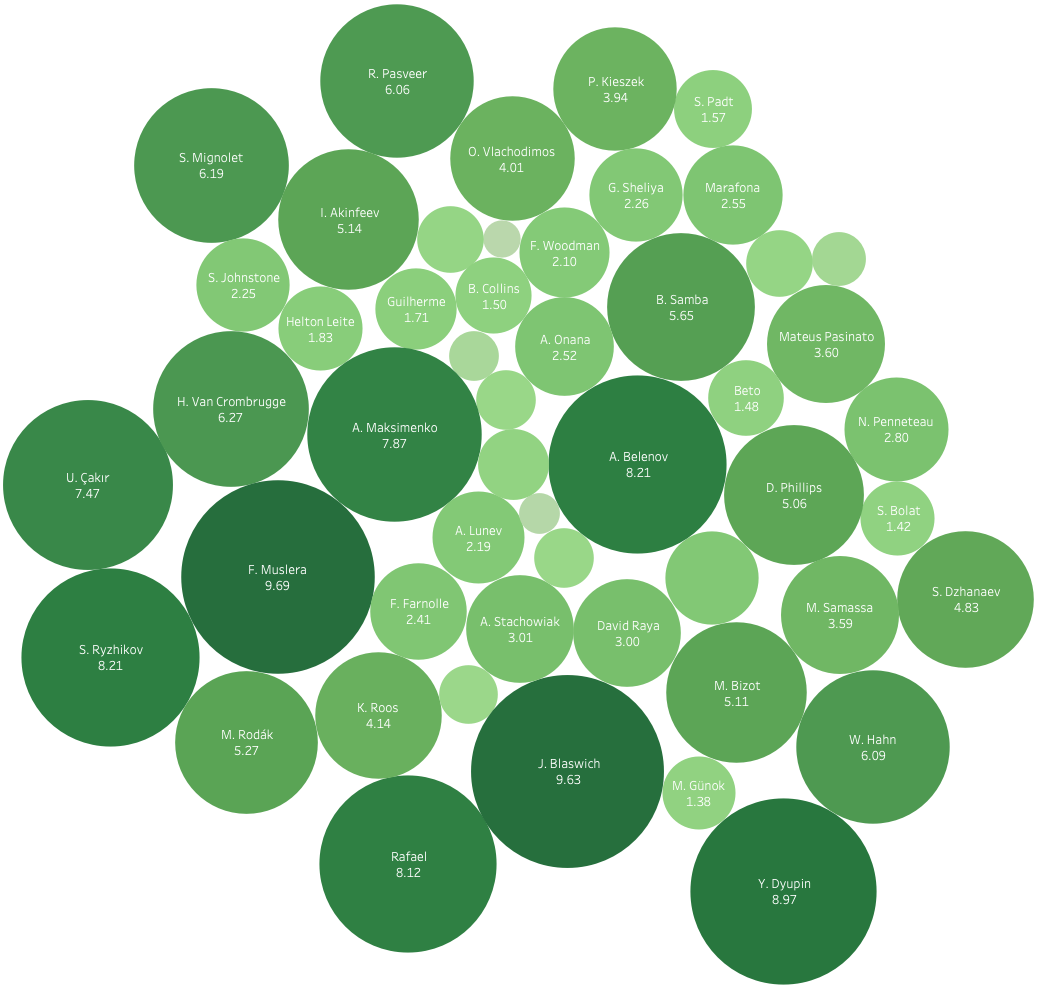 Blaswich, Muslera, and Dyupin stand out here with the highest xG +/-. Muslera has the greatest, saving 9.69 more goals than he was expected to. Blaswich has saved 9.63 goals and Dyupin 8.97.

Previously mentioned Çakir has saved 7.47 goals, Mignolet 6.19 and Van Crombrugge 6.27 more than they were expected to.

This shortlist doesn’t contain the best players, but those that teams within the top five leagues could scout. Many of the better performers this season are older players, often above 30-years-old. These players are likely to be coming to the end of their careers and are unlikely to transfer.

Aleksandr Maksimenko – The Spartak Moscow man is only 22-years-old and is already one of the better keepers in the Russian Premier League. He already has 47 games for his club and seven caps for Russia U21s. The Russian has saved 7.87 more goals than he was expected to this season, keeping a clean sheet in 33.33% of his games. He would be a perfect transfer for a team that likes to keep possession. He averages 15.51 passes per 90, with 8.06 of these being lateral passes. His average pass length is 31.06 metres

David Raya – The Brentford number one is pushing for promotion this season. He is central to his team’s impressive passing style of play. The Spaniard receives 16.82 passes per 90, showing that his teammates like to utilise him as an option. He makes 12.35 lateral passes and 8.75 long passes per 90. His shot-stopping is also very impressive. The former Blackburn man has kept a clean sheet in 32.50% of his games whilst saving 75.19% of shots he faces. The 24-year-old has saved 3 more goals than he should have this season and 0.07 per 90.

Uğurcan Çakir – The Trabzonspor number one has had a great season with the Turkish giants who are challenging for the league title. The 24-year-old came through the youth ranks at Trabzonspor and already has two caps for the Turkish national team. He’s saved 7.47 more goals than he was expected to this season, saving 76.56% of shots he’s faced. He faces a fair amount of shots per 90 (4.31) but only concedes 1.01 goals. Çakir could work on his passing game, only completing 79.2% of his passes, with an average length of 37.2 metres, but at such a young age, this is not a problem.

This data analysis has looked at the best goalkeepers in the best leagues outside of the top five. The best performers all appear to be older, with many keepers going back to their home countries to finish their careers, for example, Mignolet returning to the Belgian league. However, as evident in the shortlist above, there are numerous young goalkeepers that have promising abilities and could eventually perform at the highest level within Europe’s top five leagues. 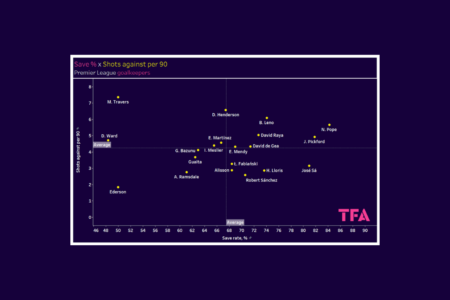