In what will be an enthralling end to a crazy Bundesliga season, RB Leipzig has once again impressed. The German league sees the most goals per game compared to the top five European leagues, 3.21. This means that goalkeeper stats can often be misleading and appear bad compared to other leagues.

In our latest data analysis on the best goalkeepers in Europe’s top five leagues, Péter Gulácsi impressed. The Hungarian international certainly has an incredible story to back up his impressive performances. A five-year stint at Liverpool, with loans to the likes of Tranmere Rovers and Hereford United, was followed by an important move to Red Bull Salzburg. Since then the 30-year-old has nailed down a place at RB Leipzig. Becoming one of the best goalkeepers in world football.

This tactical analysis will look at the role Gulácsi has played for his team this season, and why he is such a consistent performer. We will analyse the most important aspects of goalkeeping, as well as how he fits into his coach’s tactics.

Is Péter Gulácsi one of the world’s best?

Bundesliga sees more goals than other top leagues, so it is important to use fair data to compare him with the rest. The below graph shows how each goalkeeper has performed this season, by calculating their PS xG +/-. This means how many goals they have conceded compared to how many they were expected to concede. 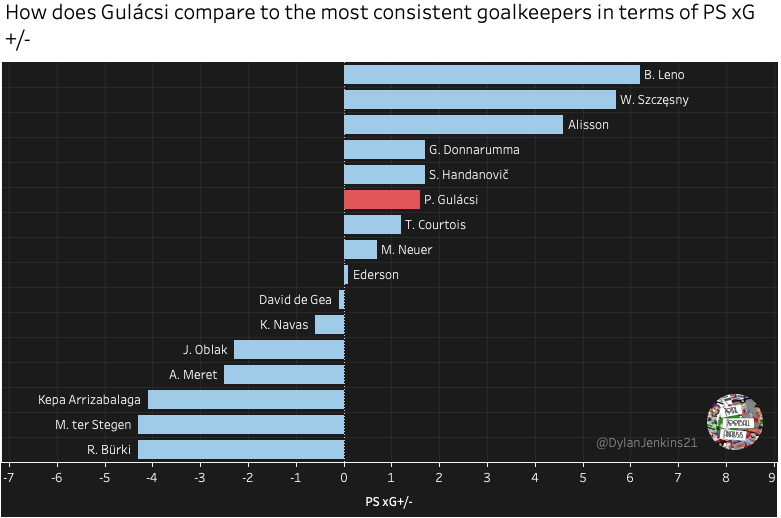 The Leipzig shot-stopper comes in at sixth place, saving 1.6 more goals than he was expected to. Arsenal’s Bernd Leno, Juventus’ Wojciech Szczęsny and Liverpool’s Alisson all stand out from the rest. Nonetheless, when we look at the calibre of keepers that have a negative rating, we get a sense of how good Gulácsi has been this season.

Let’s narrow the search down to goalkeepers within his league, this gives us a more reliable outcome as these goalkeepers all face the same opposition. 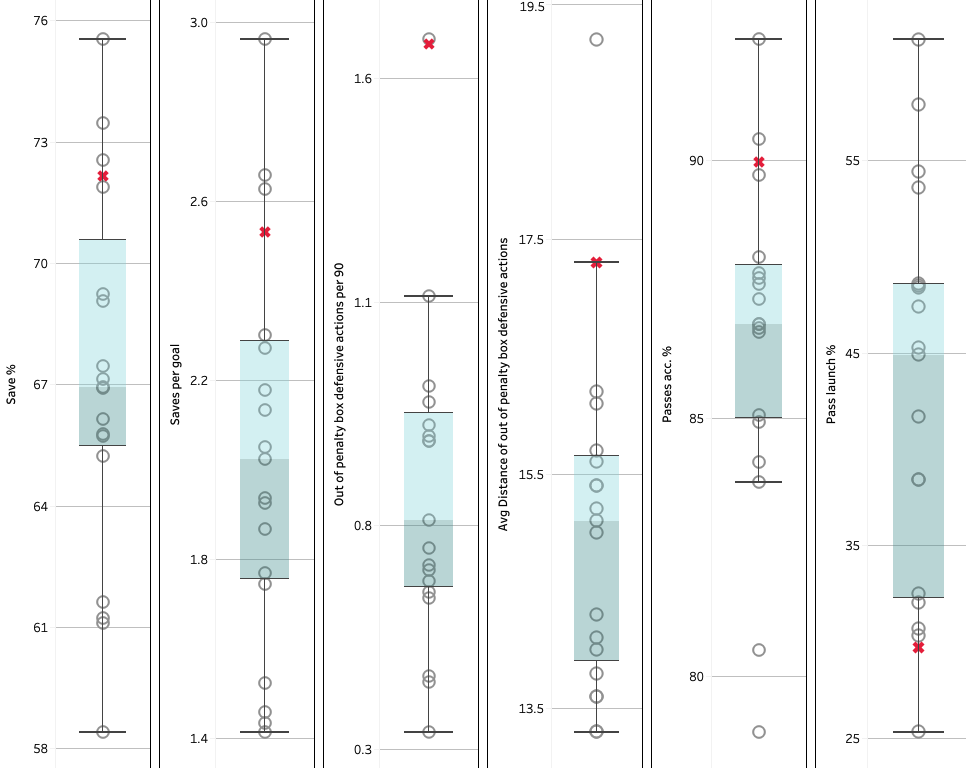 Gulácsi is labelled on each graph as the red cross. He ranks as one of the best in every category. He appears in the upper quartile for save %, saves per goal, and passes completion %, meaning he’s above the league average. And excluding outliners he has the maximum value for average distance during out of penalty defensive actions.

But how has the former Liverpool man fared since joining Leipzig? 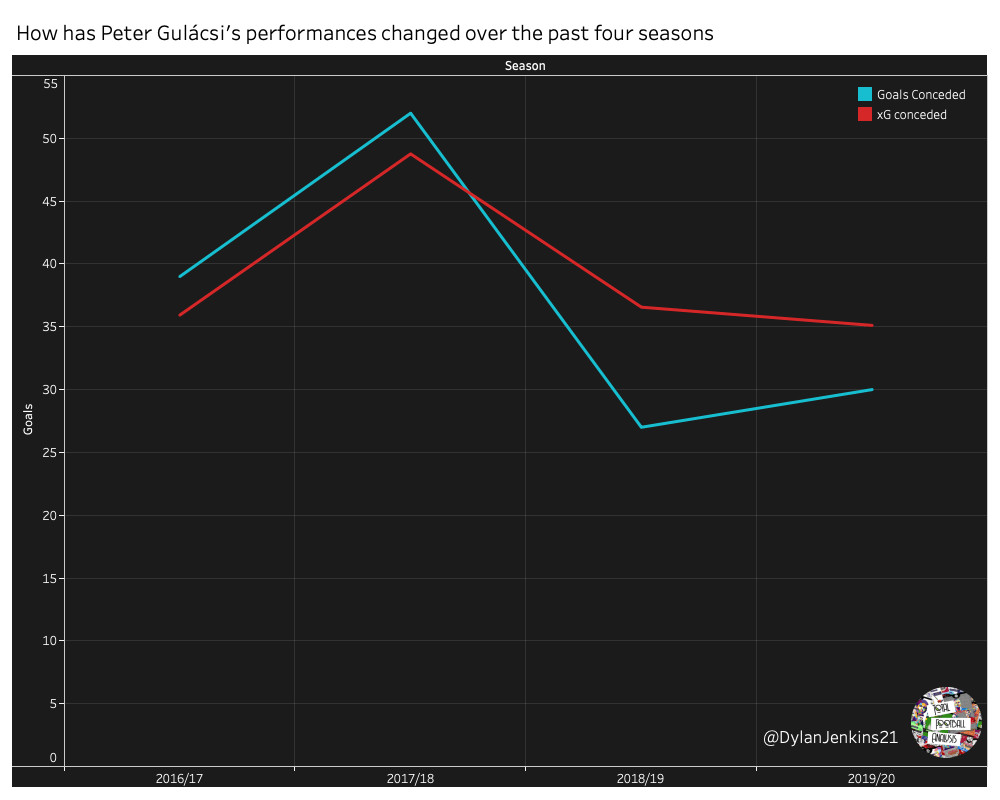 We can see that Gulácsi has made considerable improvement since the 2017/18 season. However, this season has not been as good as last, even if he is still conceding less than expected.

When you play for a top team with a good defence, as Gulácsi does, you must be a top shot-stopper. He may not get tested all game, but then when called upon, he must be reliable. The danger of the Bundesliga is shown in the fact that the Leipzig keeper still faces 3.4 shots on target per 90, meaning he does get tested a fair bit. However, his nine clean sheets this campaign suggest that he has been able to deal with these shots fairly well. He kept a clean sheet in 33.33% of his games. 60.8% of Gulácsi’s saves are made with reflexes, meaning the 30-year-old is very capable of making all kinds of saves. 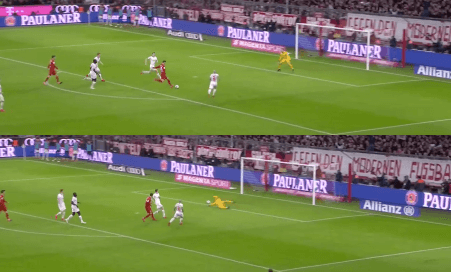 Standing at 1.91m, he’s an ideal height for a goalkeeper. Tall enough to save shots into the top corners, but short enough to get down easily to save low shots – as we see in the above example against Bayern Munich. Gulácsi has his legs bent and hands by his side to prepare himself for any type of shot. Because he is so low to the ground he’s able to throw himself down to his right and palm the ball to safety, showing great reflexes. He makes 2.35 saves per 90, with a save percentage of 72.16%. 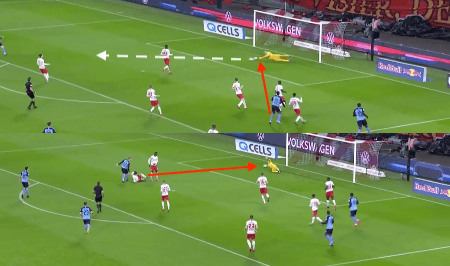 Recovering quickly after making a save is important for a goalkeeper as it allows them to set for a possible second shot. Gulácsi does this very well against Borussia Mönchengladbach. After saving the first strike into a reasonable location, the opposition team is first to react. Before the second shot is taken he is back on his feet, meaning he’s able to tip the ball around the post. Gulácsi makes 2.48 saves before he concedes, and double saves such as this further improves this stat. 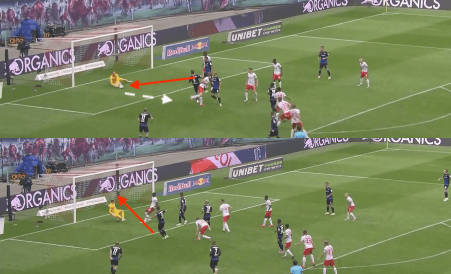 Although Gulácsi is usually safe in terms of parrying the ball, he can sometimes get his body in an awkward position, meaning he doesn’t save the ball effectively. In the above example against Paderborn, following a header, he is unable to push the ball to the side even though he saves it with his hands. Because the ball is bouncing it would be a more effective option to scoop the ball to the side.

His mistake here drops straight to an opposition player who equalises in the 91st minute. Mistakes like this, along with mistakes from defenders, mean that the Hungarian concedes 0.95 goals per 90. But his performances have been more positive than negative this season because he’s expected to concede 1.14 goals per 90. 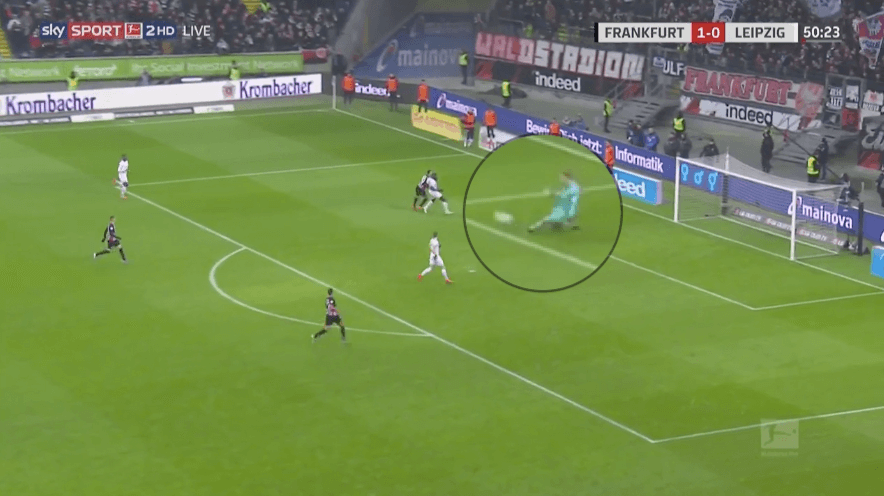 He doesn’t have a huge build, however, his height means that he can spread himself effectively. This tactic is used by the best keepers to stop point-blank shots and one-on-ones, or as in the example above, to stop close shots.

As the shooter is so close to his goal, Gulácsi spreads himself with his front leg outstretched and back leg bent to stop the ball going underneath him. This action allows him to cover as much of the goal as he won’t have enough time to react to a shot as he normally would.

Taking up an advanced position 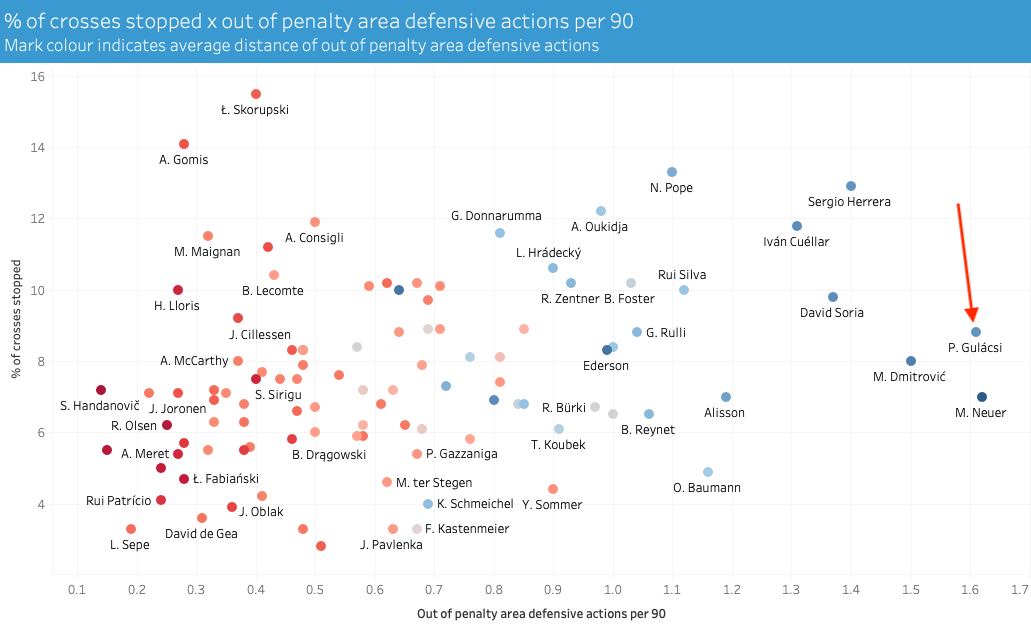 Gulácsi comes under the category of ‘sweeper-keeper’. Out of all the goalkeepers in Europe’s top five leagues, excluding Manuel Neuer, he has the most out of penalty box defensive actions per 90, with 1.61, with an average distance of 17.3 metres.

His habit of rushing out of goal when needed gives his team a huge advantage, especially with coach Julian Nagelsmann opting to play a high line. Gulácsi marks the space between the edge of his box and defensive line, sweeping up balls intelligently. 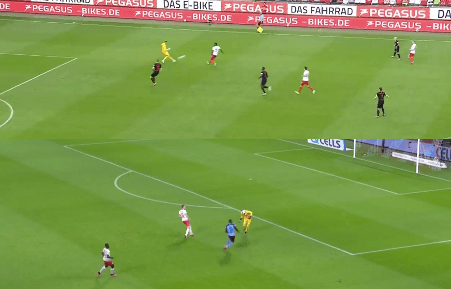 The Hungarian can sense the level of danger when leaving his penalty box. He never misjudges the path of the ball and always at least intercepts. He often has the awareness to know whether he needs to clear the ball first time, or whether he can afford to take a touch and find a teammate.

In the above examples, he has an opposition close to him and the ball is coming at some pace, meaning a clearance would be the safer option. In the last example, he does well to head the ball clear. If he waits for the ball to drop at his feet, the defender will likely get there before him. 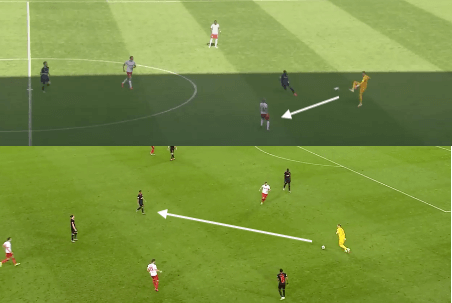 Contrasting with his no-nonsense approach, he is equally comfortable using his ball control when recovering the ball for his team. This kind of attitude has contributed to him getting 4.78 recoveries per 90. He often receives passes from his teammates, similar to the second picture above, to create an extra defender. This allows his centre-backs to split and provide more width. 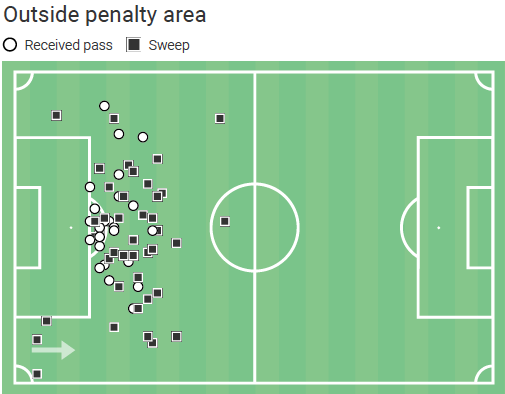 The map above shows Gulácsi’s actions outside of his penalty box. It shows that he receives many passes high up the pitch. When teams sit back against Leipzig they can play a higher defensive line, meaning the keeper can play-make from outside of his box.

We can see that the majority of passes received are closer to his box, whereas his sweeping actions are higher up the pitch – showing that he has a good understanding of when to clear and when to play out from the back. Gulácsi makes 27.29 passes per 90, with a completion of 89.97%. His average pass length is 32.6 metres, the second shortest in the Bundesliga. These stats show that he is comfortable using his feet, and is adept at making short and long passes.

With Gulácsi being a sweeper-keeper, he is very good at dominating his box and taking pressure off his defenders. The Leipzig keeper makes 1.19 exits, and 0.32 aerial duels per 90, the latter with a completion rate of 66.67%. 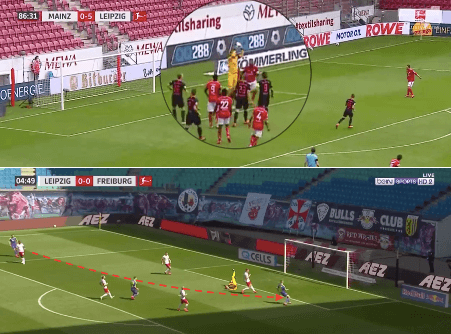 His height means that he can leap above his defenders and opposition to claim high balls from crosses delivered into his box. His ability to read the flight of the ball means that he has been able to stop 8.8% of crosses that he has faced. This low percentage means that he has the football IQ to choose the right time to collect a cross, and when to stay on his line. However, this isn’t always the case. 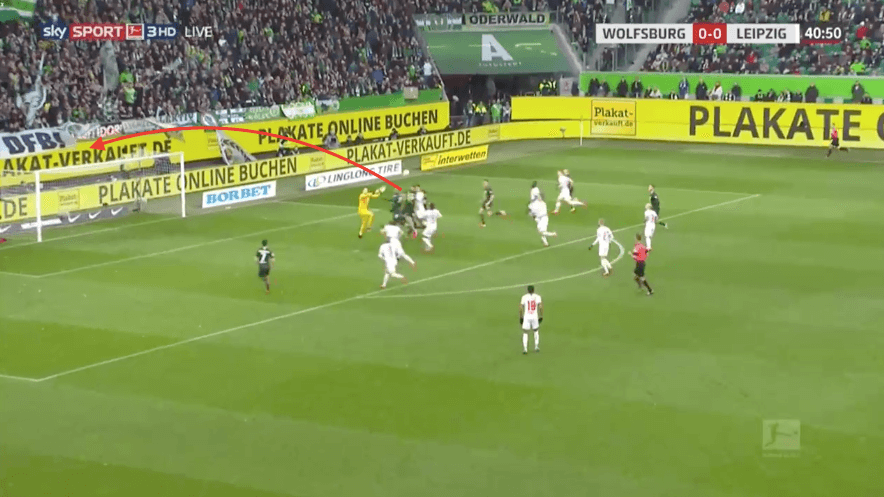 In this example against Wolfsburg, he comes to claim a cross but is beaten to the ball by an attacker. Luckily the contact on the ball is too hard and it sails over the crossbar. This was a rash decision by Gulácsi. He’s normally very reliable in terms of reading the flight of the ball. But on this occasion, he should’ve stayed in his six-yard box.

His commitment to claiming balls in his box is key to his team’s counter-attacks. With pacey forwards such as Timo Werner, Dani Olmo, and Ademola Lookman, Gulácsi’s long passing in behind the opponent’s defence means that Leipzig can start attacks from their own box.

This, joined with his accurate kicks out of hand and throws means that they are deadly on the counter. Gulácsi performs 5.61 throws and 7.12 long passes per 90, with an accuracy of 65.52%. 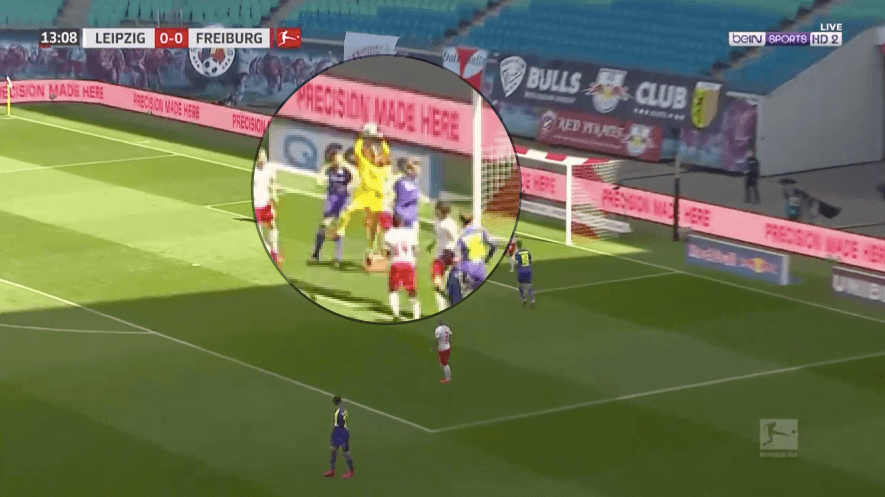 Most recently against Koln, he outjumps all players to claim the ball above his head. With players still behind him, he is already thinking about attack. He launches the ball forward as he notices Koln are playing a high line. The pass has the perfect amount of weight on it – enough for Werner to run onto. But not too much that the opposition keeper can sweep up. This resulted in an assist for Gulácsi. 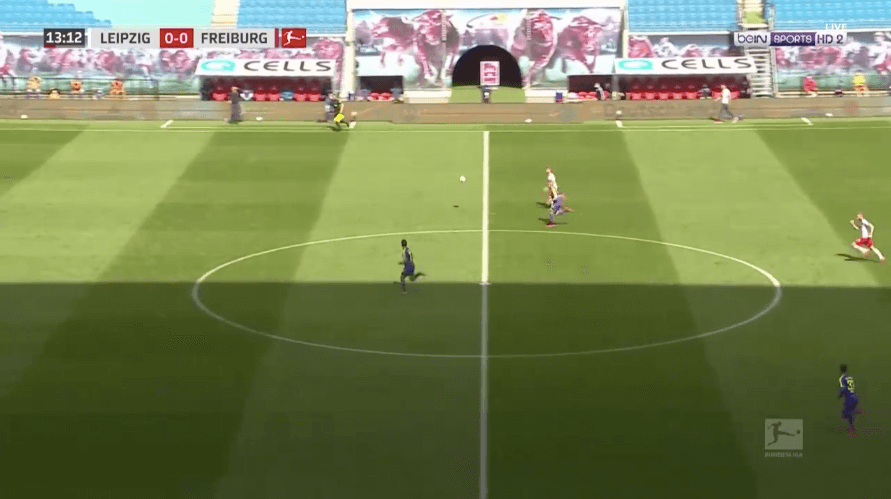 The former Liverpool keeper against the current

With Liverpool letting the Hungarian go without playing a single game, let’s see how he compares with arguably the best goalkeeper in world football.

The shape of both graphs tells us that both are similar goalkeepers, coming under the category of sweeper-keeper. Alisson’s shot-stopping is better, saving 4.09 shots before conceding, compared to Gulácsi’s 2.48. But this may be because the latter faces more shots per 90 (3.4 compared to 2.67). The Leipzig keeper tops Alisson in almost every other category. He makes considerably more exits and aerial duels, and slightly more passes and OPA’s.

After a rough start to his career, Gulácsi has been patient and has slowly become one of the best goalkeepers in the world. This scout report has outlined the best aspects of his game that make him so valuable to RB Leipzig. Although expectations are higher than ever this season, he is still performing better than most would have anticipated. His ability to occupy space behind his defence and sweep up potential risks make him one of the best ‘sweeper-keepers’ in world football. This paired with his above-average shot-stopping makes him an incredible keeper to watch.