It’s a goalkeeper’s job to stop what we all love to see – goals. This is the reason why they play such an important role at every football club. The recent transfer business of shot-stoppers has shown that these historically underappreciated footballers are being placed alongside outfield players. Ederson’s transfer to Manchester City for £36milion saw the transfer record for a goalkeeper be broken for the first time since Gianluigi Buffon’s move to Juventus in 2001.

In this data analysis, I will be looking at the statistics of each goalkeeper in Europe’s top five leagues to decide five candidates that should be scouted further. I will be analysing goalkeepers who have played at least 1000 minutes in their respective leagues this season, focusing on the lesser-known goalkeepers to identify surprising candidates. The data I use will be broken down into three categories, shot-stopping, passing, and aggressiveness, giving us a well-rounded analysis.

Who are the best shot-stoppers?

Some data can be misleading when it comes to goalkeepers preventing goals, as his defence can have such a big impact. For example, a player who faces more shots per 90, will often concede more goals. Therefore, it is important to find the correct data to analyse.

This first section will look at PS xG. This metric is similar to the normalised expected goal but doesn’t take into consideration blocked shots or shots off target. Meaning it gives a more clear picture of the quality of shots faced.

The below graph looks at the quality of the shots each keeper faces per 90, and how many goals they have conceded. 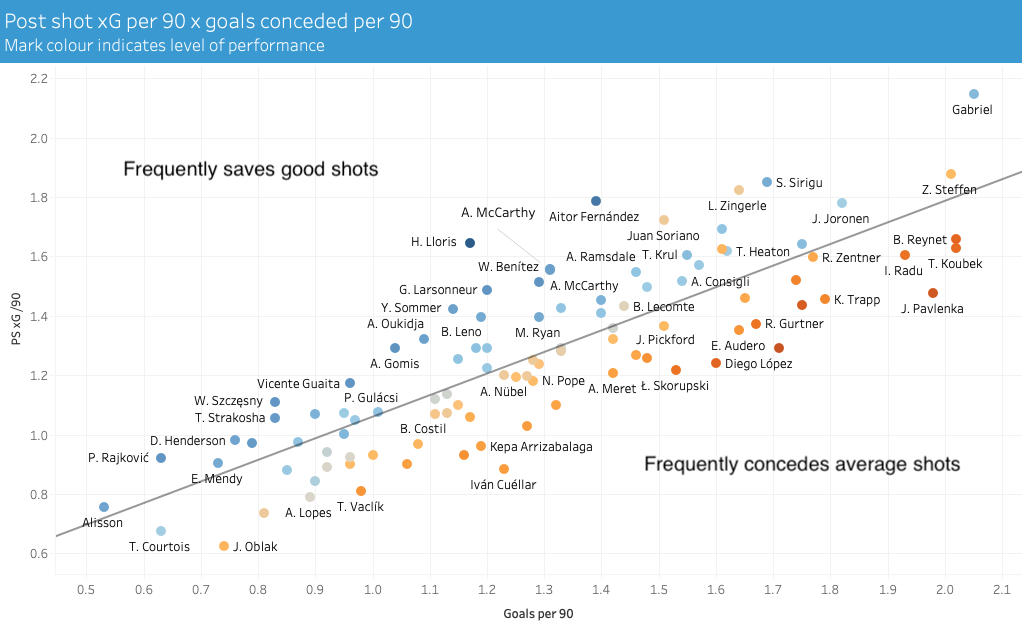 Players in the middle of this graph who are above the trend line are the best performers here. They often face and save, above quality shots. The standout players are the ones highest above the line.

Surprisingly, Tottenham’s Hugo Lloris is highest above the line. The Frenchman has 1.64 PS xG per 90, but only concedes 1.17 goals per 90. Although Lloris has only played 1078 minutes of Premier League football this season, he’s shown that he’s still capable of saving the harder shots he faces. Even if he does struggle with the slightly easier tasks.

The graph shows that Aitor Fernández, of Levante, has been one of the better performers. This graph suggests that his team’s season would’ve been a lot worse if it wasn’t for his ability to save difficult shots. His PS xG per 90 is 1.79 and he only concedes 1.39 goals per 90.

A much younger keeper performing well this season is Stade Brest’s Gautier Larsonneur. With his team struggling in Ligue 1 this season, he has certainly performed better than expected. The 23-year-old has 1.49PS xG per 90 this season, only letting in 1.2 goals per 90.

The next graph will analyse each goalkeeper’s performance against the quality of the shots they face. 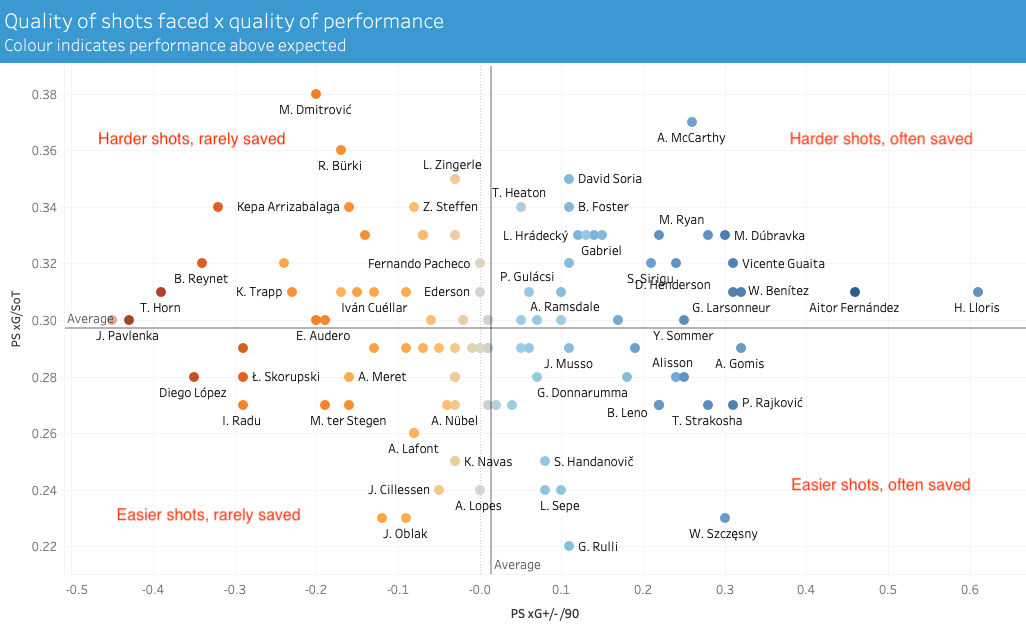 PS xG per SoT measures the likelihood of a goal per shot on target. Whilst PS xG +/- per 90 measures a goalkeeper’s performance against their expected per 90. The players in the top-right quadrant are the standout players here, facing harder shots and often saving them.

Since joining Newcastle, Martin Dúbravka has been overachieving in the league, saving 0.3 more goals than expected per 90. The Slovakian faces harder shots than the two above, with 0.33 PS xG/SoT.

McCarthy faces the second most difficult shots out of all these keepers, with 0.37 PS xG/SoT. However, he is dealing well and stopping a lot of these, saving 0.26 more goals than he should.

A keeper that is performing well, but facing easier shots, is Alfred Gomis of Dijon. He is one of the highest performers above expected, with 0.32 PS xG +/- per 90.

Goalkeepers leaving their goal-line to help the defence is a tactic that has become much more popular. The term ‘sweeper-keeper’ has been used to define actions such as this. Although this isn’t as important as preventing goals, it’s a helpful dimension that modern keepers add to their game. The graph below shows each keeper’s percentage of crosses stopped and OPA’s per 90 (out of penalty area defensive actions), the colour of each mark indicates the average distance of this. 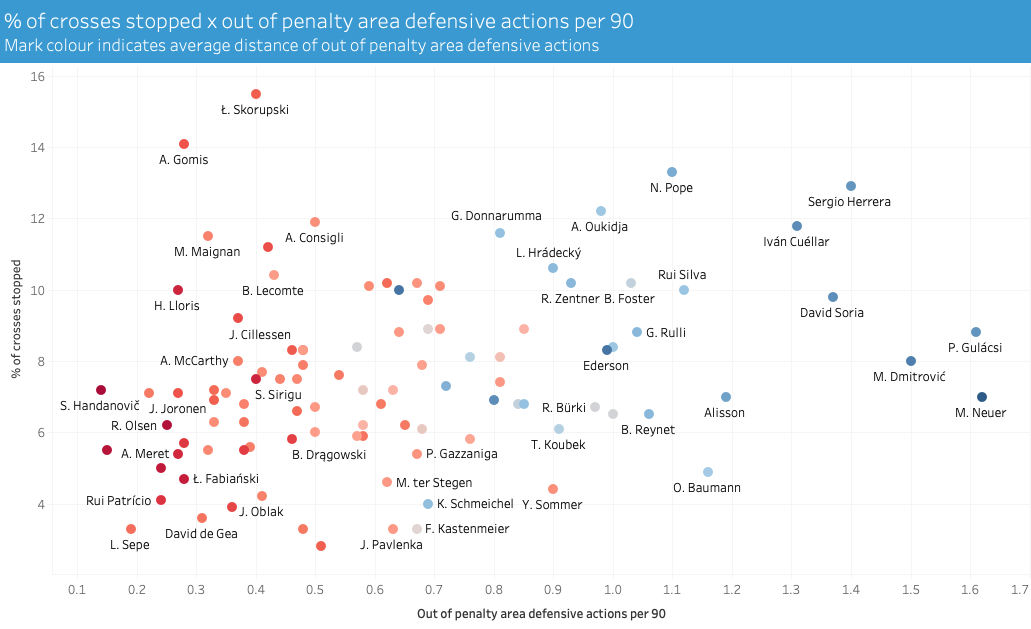 Bayern Munich’s Manuel Neuer impresses the most in regards to OPA’s per 90. Neuer’s performances were one of the first to coin the term ‘sweeper-keeper’, so there’s no surprise there. The German has 1.62 OPA’s per 90 with an average distance of 19.2 metres. The latter stat is the highest of all keepers analysed too.

One player that has improved as much as his club, RB Leipzig, is Hungarian Peter Gulácsi. The ex-Liverpool and Tranmere player is just behind Neuer with 1.61 OPA’s per 90. But Gulacsi stops more crosses that he faces, with 8.8%.

Nick Pope of Burnley, shows up well in regards to both stats. The English international stops 13.3% of crosses into his box. The 28-year-old leaves his penalty box 1.1 times per 90 for a defensive action, with an average distance of 16.6 metres.

Bologna goalkeeper Lukasz Skorupski has stopped the highest percentage of crosses into his box, with 15.50%. However, he rarely leaves his penalty box (0.4 OPA’s per 90).

Sergio Herrera shows up extremely well in terms of both statistics too. The Osasuna keeper has stopped 12.9% of crosses, and has 1.4 OPA’s per 90, with an average distance of 17.3 metres.

A goalkeeper’s level of distribution will nearly always be affected by their team’s ability and coach’s tactics. Meaning that a goalkeeper’s passing ability is an integral part of the way his team plays. A prime example is Ederson at Manchester City

A goalkeeper’s passing strength is often reflected by their ability to complete long passes. But their pass frequency reflects their team’s tactics. The below graph examines each player’s goal-kick launch % against their average pass length (metres). Each mark’s colour indicates their passing completion %.

Goalkeepers towards the bottom left play for clubs who prefer to pass the ball, whereas those towards the top right play for teams that kick long. 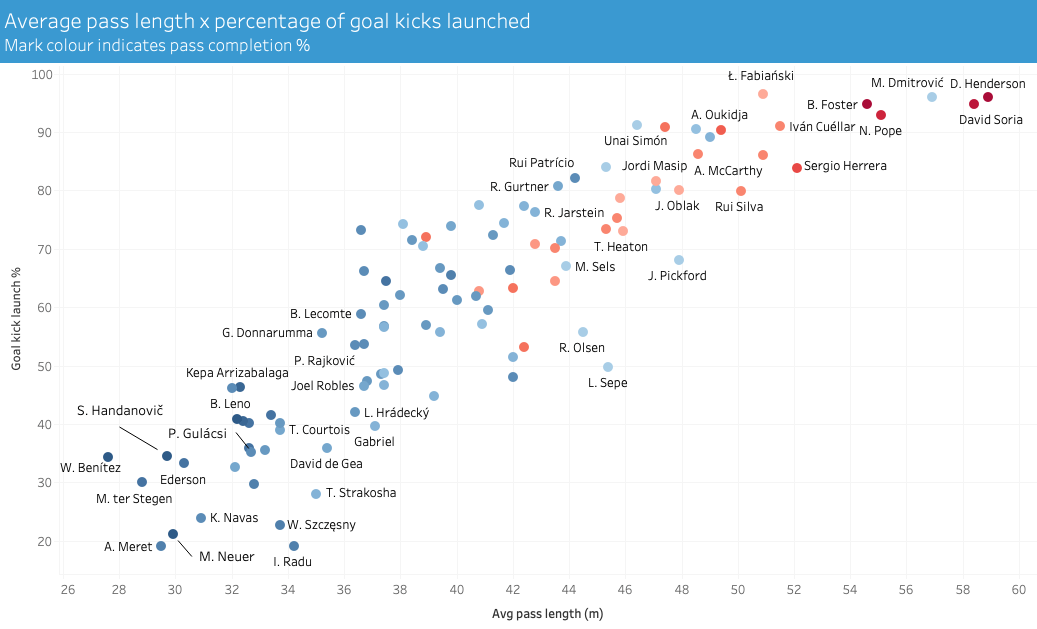 Napoli’s Alex Meret and Parma’s Ionut Radu, who is on loan from Inter, launches the least amount of their goal kicks. Both only launch 19%, with Meret completing 89.58% of all his passes, with the Parma man completing89.84% of his.

Benítez has the lowest average pass length, with 27.60 metres. The Argentinian has completed 92.97% of all his passes, launching 34.40% of his goal kicks.

Inter’s Samir Handanovič has completed the highest percentage of his passes, with 93.40%. Very impressive considering his average pass length is 29.70 metres.

Neuer, Ederson and Marc-Andre ter Stegen all impress here, due to their team’s passing style. All completing more than 90% of their passes.

Very impressive in this graph is Eibar’s Marko Dmitrović. Although the Serbian has the third-longest average pass distance (56.90 metres) and 96.10% goal kick launch, he has still managed to complete 81.99% of his passes. Meaning his long passing is incredibly accurate.

After considering all three categories, I have managed to decrease the sample down to a five-man shortlist based on the better players in each section. I have identified these lesser-known goalkeepers so that they can be scouted further.

Levante’s Spanish goalkeeper has been one of the most impressive keepers this season. His metrics show us that although playing behind a weak defence, he has had an incredible season. The 29-year-old has conceded 40 goals this season, meaning he won’t get any recognition. Fernandez has saved 12.5 more goals than he should have this season, and he makes 3.03 saves before he concedes, which is incredible considering his team’s place in the league. In terms of passing, Fernandez makes five throws per 90, and makes 15.54 passes, meaning he doesn’t see the ball much.

The Brest goalkeeper only launches 44.7% of his goal kicks, meaning he is comfortable playing the ball long and short. The 23-year-old completes 84.18% of his passes and ranks fairly average in terms of off goal-line activity. Whereas his shot-stopping is impressive. The Frenchman has kept seven clean sheets, saving 8.2more goals than expected and making 2.79 saves per goal.

The 31-year-old Slovakian has impressed spectators of the Premier League since joining Newcastle with his ability to save difficult shots. Dubravka’s passing is below average due to his team’s playing style, and he isn’t likely to leave his goal-line. He has been a vital part of Newcastle’s bid to avoid the drop in the past two seasons, making 2.71 saves per goal, facing 5.02 shots per 90. Dubravka has saved 8.7 more goals than he was expected to.

The Hungarian international has had an intriguing career. Now playing Champions League football with RB Leipzig, he was once at Hereford United. Gulacsi is an all-round keeper, impressing in all categories. He only launches 29.7% of his passes, meaning he prefers to pass short, and successfully so, with a completion of 89.97%. He leaves his box 1.61 times per 90 to make a defensive action, also stopping 8.8% of crosses into his box. Gulacsi has only saved 1.6 more goals than expected, but this is because he plays for a very good team. His 2.48 saves per goal prove that although he has a better defence in front of him, he still makes good saves.

The 27-year-old has had a great season with OGC Nice, finishing fifth, and this shows in his stats. The Argentinian has saved 8.3 more goals than he should have this season, saving 2.75 shots before conceding per 90. He faces 4.94 shots per 90, proving that his abilities are tested each game. He doesn’t often leave his box, but he has stopped 7.1% of crosses into his box. As mentioned, he has the shortest average pass length (27.6 metres), making 16.28 passes per 90, completing 92.97% of them.

Now we have a solid shortlist of goalkeepers within the top five European leagues, we can begin to scout them further. Although we have used metrics that analyse each keeper’s individual performances, there is no denying that their respective teams will have a big effect.

With recent transfer business, it is great to see that goalkeepers are being appreciated, and that is why it is important to compile analyses on their performances as they step more and more into the spotlight. Most football fans are quick enough to analyse goalkeeper’s mistakes, but ignore the positive aspects of their games.