The Danish football followed the path of Bundesliga and was the second major European league to return to action over the weekend. After almost three months, the clubs could again march towards European glory or away from the relegation zone. On Monday afternoon, Midtjylland aimed to pick up the pace and continue dominating the league. AC Horsens were supposed to be their perfect next victim.

In this tactical analysis, we are going to explain how the tables have turned and how Horsens caused one of the biggest surprises in the 2019/20 season. The article will focus on the forms, previous meetings between these two clubs, and the tactics used by the two managers who tried to adapt to football after a long break.

Starting the season with 20 wins, two draws and two losses, Midtjylland has left little to no doubt about their intentions in the league after losing out to Glasgow Rangers in the Europa League. Before the general lockdown, not only did they manage to set a five-game winning streak but the defence didn’t concede a single goal in the process. They kept a 12-point lead over FC Copenhagen so the break came at the worst possible time.

On the other hand, Horsens arrived in this game with mixed expectations. Their February couldn’t have been any worse as they conceded six against Nordsjaelland, followed by two home losses. Later, they visited the reigning champions and took all three points from Copenhagen, which could prove to be a crucial turning point in their relegation battle.

In their head-to-head matchup, we have to go back all the way to 2012 to find a game where Horsens could steal a point from Midtjylland. However, the stage was set equally, the teams played behind closed doors as the fans could only support the home side from the drive-in fan zone.

Brian Priske sent out his best starting eleven available in their regular 4-2-3-1 formation. Despite being as dominant as they are in 2019/20, the team prefers a rather direct and vertical style as opposed to patient passing. The numbers support the aforementioned statement, their 384 average passes per 90 minutes are enough for the eighth place and lagging 100 passes behind FC Copenhagen (484). Relying on crosses from their full-backs, Paulinho and Joel Andersson and long balls from their keeper, Midtjylland is first in crosses per match with 18.6. On the receiving end stands Sory Kaba, a strong target man with a whopping 31.8 duels per 90 minutes, who holds up the balls and distributes them to his teammates. They came to this game with a solid plan, let’s see what it looked like.

The team managed to solidify their position after the first 15 minutes, thanks to two key movements in their own half. The two centre-backs, Erik Sviatchenko and Alexander Scholz were facing two pressing forwards. Their wide positioning before goal kicks created space in the middle, while the two full-backs waited at the half-line. As Horsens lined up with a flat-four in the midfield, Midtjylland used two more players in the build-up since one could have easily been followed by a man-marking central midfielder. Frank Onyeka and Evander functioned as a double pivot and provided numerical advantage against the opponent’s hesitant pressing.

The other key element of the build-up came from Scholz when Horsens defended with lower lines. Near the half-line, he easily split the midfield with brave runs. Midtjylland’s tactics were simple, get the ball to the wings and bomb crosses into the penalty area. Scholz’s movement helped to achieve that. He dragged away opponents from the touchline and created two against one situations after eventually passing to the left full-back.

Connecting to the previous point, this part of the analysis will further discuss how they managed to take advantage of overloading the flanks. As Midtjylland managed to bypass the first line of defence, Anders Dreyer became a key figure in the development. He had the freedom to drop between the opposition lines since Horsens midfielders were often out of position after getting pulled away by Evander and Onyeka. He also moved from side to side, providing an option to the marauding full-backs.

During the full game, Midtjylland was certainly more active on the right side (73% of all attacks) and conducted 1.86 expected goals-worth of offensive actions there. Right-winger, Awer Mabil himself had 15 crosses while Joel Andersson had nine. After the start of the second half, the team pushed even higher while Mabil appeared on the left-flank sometimes.

Midtjylland’s game plan was clear but their execution lacked upfront. Kaba had a hard time to distribute balls aimed at him as he racked up 15 ball losses and won only one out of his seven offensive duels. It was also visible that he became isolated among the centre-backs as his teammates spread wider and often mistimed his headers.

The forced break has taken its toll on the strikers, at least in this particular match. Kaba finished with 0.99 xG but wasn’t clinical enough to save at least one point. Lasse Vibe couldn’t add much to the team’s performance while Aral Simsir got his second appearance on the field and couldn’t make a difference either.

In transition and defence

Despite the numerous missed chances, the game could have been won on the midfield. Midtjylland were aggressive with their pressing, they put pressure on defenders right after goal kicks, forcing them to go long.

When Horsens tried to play laterally from the midfield to the wing, Paulinho and Andersson became key elements in the defensive action while the role of the two wingers was to cut off the passing lane back to the full-backs. In the second half, they produced one of the best pressing intensity numbers in Europe this season with a 4.0 PPDA.

Even when the pressing was successful, individual mistakes or not being committed enough to tackle cost them dearly. The team missed a driving force from the midfield, something that Evander couldn’t become. As the two centre-backs were pinned by the two strikers, the Midtjylland midfield were often run over by the opposition and allowed them to gain position.

Bo Henriksen’s starting eleven matched if not exceeded Midtjylland physically. They rank second in aerial duels, loose ball duels and third in offensive duels. The two teams share similar traits also in attack. As the tactics include two strikers, the direct style of play is unavoidable. They are second in long pass completion rate (58%). Moreover, only Midtjylland cross more per game than Horsens (18.3), while no one is engaged in more duels per game than their target man, Nickolai Brock-Madsen (38.3). But how could they keep their physicality after the lockdown?

In the first 15 minutes, the teams were evenly matched as Horsens, especially the midfield picked up the match pace quickly. Their initial 4-4-2 turned into an asymmetrical 3-4-1-2 in the occasional build-up. This way, the full-back on the opposite side could provide width on the field while Jonas Thorsen, the left-winger could slot behind the two strikers. 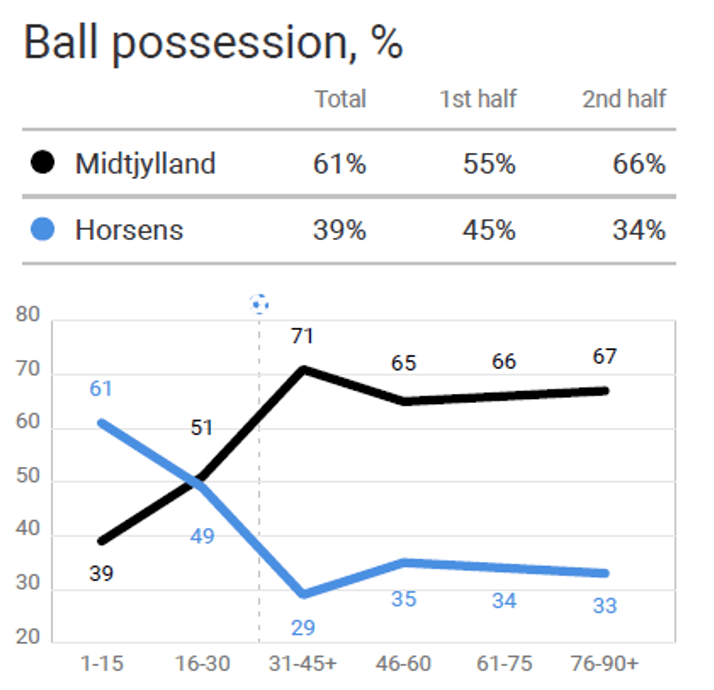 Left-back Michael Lumb had a great game, and always managed to find gaps to work against the pressing traps of Midtjylland. His average position was just above the half-line, about twenty meters further than his full-back pair’s, 37-year-old Peter Nymann’s. This setup allowed Horsens to create favourable matchups against the opposing defence as they were always ready to engage in aerial duels.

The asymmetry continued in the final third as well, bringing two advantages to Horsens. On the side of the overload (usually the right-wing), they could create passing triangles and didn’t shy away from short combinations. The players often switched positions as the striker pair, Rune Frantsen and Brock-Madsen tried to shake up the defence. Thorsen often appeared on the right-wing before long balls and it worked. Only Brock-Madsen won less than 50% of his offensive duels, everyone else from the starters finished above 50%.

The team always kept a spare man to connect with the midfield. This proved to be crucial as they continued to play out of pressing even when the pressure was high. The overload created empty spaces on the opposite flank and Lumb was there to exploit it. The Midtjylland defence, as a line, was misplaced which also led to the only goal of the match.

The goal came in the 36th minute after a controversial tackle made by Thorson and Jonas Gemmer. Dreyer lost the ball and the attackers were slow to track down the quick development which ended up on the left flank.

Lumb arrived much quicker than Mabil and passed to Frantsen who received the ball in an unusual position by the sideline. His positioning dragged Sviatchenko out of place and left Paulinho with defensive duties. Louka Prip cleverly stayed in Paulinho’s blind-side and attacked the ball from behind. With a little luck, he managed to get on to the end of it as the defence could only stand still and do nothing to prevent the away team from scoring. 0-1 to Horsens.

In transition and defence

As I mentioned earlier, the two strikers started the game by pressing the two centre-backs. At the beginning of the game, they were bravely initiating counter-pressing all over the field. Their overload on the wings enabled them to go after loose balls, often bothering the opposition with small fouls. This worked, Evander, Midtjylland’s prime creator couldn’t find his rhythm the whole game, completing only three passes to the final third.

After the first 15 minutes, Horsens decided to stay back and let Midtjylland build up until the half-line. Their narrow zonal-marking attempted to cut off passing lanes to the middle while leaving space on the wings. It was visible that the team came prepared for the crosses of the opponent as the two centre-backs, Alexander Ludwig and Malte Kiilerich neutralized Kaba. Together they won 12 aerial duels (out of 21), intercepted 21 passes and made 15 clearances, withstanding Midtjylland’s attacks all game long.

This analysis followed through one of the biggest surprises in the Danish Superliga as teams returned to action. The physical style of Horsens and the missed chances meant that Midtjylland couldn’t avoid their third loss of the season.

In Midtjylland’s challenge for the top spot and the Champions League place, this was a painful but instructive match. There is no reason to think that they won’t bounce back from this, already they created tons of chances but they lacked the finishing touches. They can correct their mistake against an exciting Nordsjaelland this Sunday.

Horsens played bravely, wholeheartedly and they got rewarded with three points. In any team’s case, collecting maximum points from back-to-back away games against FC Copenhagen and Midtjylland is a great achievement. Their low-scoring tendency could be worrying for the next fixtures but the defence stepped up and they could be a cornerstone to build on. It will be exciting to watch them for the rest of the season.