As La Liga is set to return on 11th of June, Total Football Analysis is determined to give you an overall analysis of what has already happened in the Spanish league and what’s on offer soon. As a continuation of the series of reports, this data analysis will use statistics to analyse the corners taken so far in La Liga.

This data analysis will look at how teams have performed statistically on corner kicks, the types of corners taken, and the general effectiveness of each team with corners. Similarly, we’ll take a brief look at stand-out corner taking teams in the league.

Before the pause, 270 league matches were played at the Spanish top-flight. 2273 corners were taken in total, averaging 8.42 corners per 90 minutes. The figures are lower than EPL‘s 9.83 corners per 90, because of the lower number in shots per 90, PPDA and more moderate intensity higher up the pitch to call out a few reasons.

Talking about the La Liga sides, here’s how the 2273 corners are distributed among the sides:

Among the 20 sides, Sevilla have managed to win 144 corners in the league so far, making them a team to look for in this aspect already. League leaders Barcelona have taken 111 corners so far, below the league average of 113.7. Similarly, Alaves are the sides to win the least number of corners, which correlates to their struggles in attacking department this season. Getafe and Atlético Madrid follow Sevilla, which can be justified by their playing style of using wide balls into the box that invite more blocks against them. 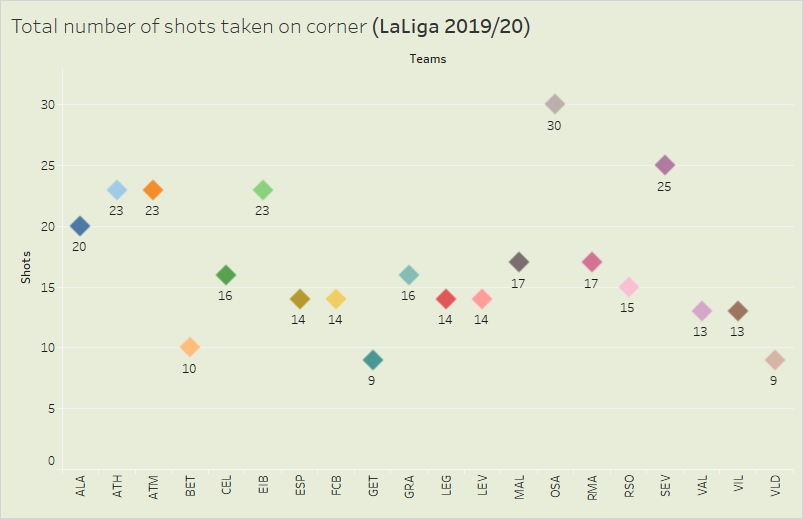 In modern football, corner kicks are often overlooked, especially considering that they can yield goal-scoring severe chances. 335 shots were taken by sides following a corner kick this season, averaging 1.24 cumulative shots per 90 minutes. As the diagram above points out, 11th placed Osasuna have registered 30 shots on corners – the highest in the league. Similarly, 25.4% of their total corners yield a shot, a figure followed by Alaves’ 22.2%. This makes Osasuna more efficient in converting their corners into shots than every side in the league.

Similarly, Osasuna’s efficiency can be further verified by using at their xG yield via corners. Osasuna have managed to earn an xG of 3.15, overtaking Sevilla’s 3.10. Not only have Osasuna managed to land chances, but quality chances compared to the other sides. As the play resumes, Osasuna might be the team to watch in corners.

In this aspect, the top two league sides have a lower number to display, as Barcelona have an xG of 1.61 followed by Real Madrid’s 1.33. 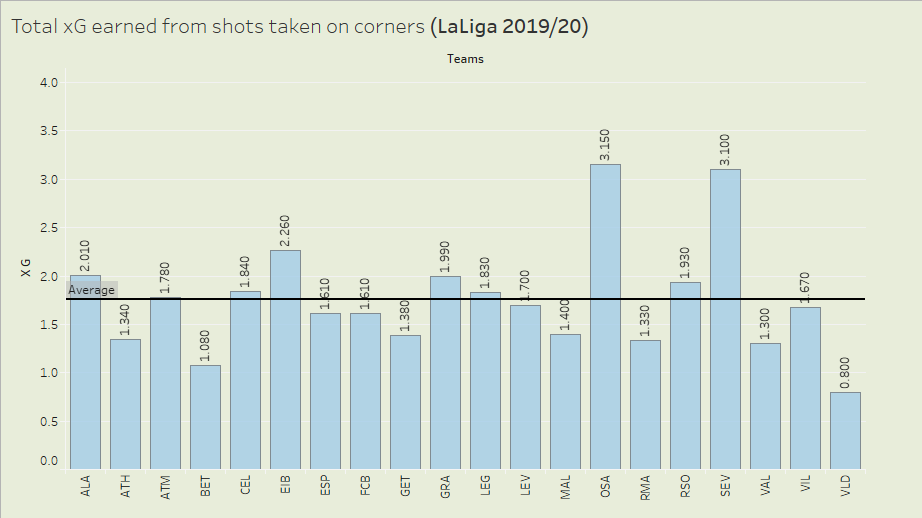 Deportivo Alavés, despite taking the lowest number of corners in the league, overtake most sides in creating quality chances via corners with an xG of 2.01. Real Valladolid, on the other side, are relatively poorer in their overall metrics so far.

The quality of chances that sides create also depends on the area they prefer to deploy their corners, the aerial ability of the players they possess and the side defending the corner as well. We’ll talk about the preferred areas of every team as the analysis progresses.

Distribution of corners by area

For this part of the analysis, we’ll have to divide the targeted area that is, the penalty box into four zones:

The four zones are allocated as shown in the figure below:

As per the Wyscout’s LaLiga report, 694 of the 2273 corners taken landed at the near post zone, making it the most preferred zone. As sides look to get to the ball before the opposition players do, this zone is preferably good to shoot on the second touch after the corner.

Similarly, the goalkeeper zone has seen 573 balls deployed in it, constituting 25.2% of the total corners taken. Sides that look to go one-on-one with the last line and possess players with aerial prowess often tend to get in this area to pose a threat.

The penalty area and the far post see 6.9% and 17% of the total corners taken. As the distance between the goal and the player going for the ball becomes relatively greater, the penalty area is generally preferred in La Liga to create chances that can be taken by foot rather than one’s head. Similarly, the far post zone provides a tighter angle at goal and threat of being intercepted by an opponent player on the way and thus, is less preferred than the near post and the penalty area.

Team’s success with corners is closely interrelated to the area in which the majority of balls are deployed. La Liga clubs show a similar interrelationship and we’ll look at how the areas affect some of the top corner taking sides in Liga right now.

The diagram excludes the short passes that do not land on to the areas previously discussed. In case of getting into the penalty box, Sevilla, Atletico Madrid, Athletic Bilbao and Eibar stand out with 100+ balls into the box from the flag.

Valencia prefer to operate often through the near-post area, as 48 of their total corners are received in the region. However, Mallorca are the most efficient sides that use this region, as 10 shots off their 39 balls in the area add up to an xG of 0.73 – the highest in the league. Similarly, Osasuna boast an xG of 0.71 with 8 shots off 35 balls received in this region.

Similarly, with 8 shots, Levante have an xG of 0.98 from the far-post zone. However, Sevilla are the most active side in this region, with 31 out of 144 balls with an xG of 0.55. Diego Simeone’s Atletico Madrid are the most successful sides when it comes to the penalty area with an xG of 0.55 off 7 shots from the zone. Due to their aerial capabilities and physical style of approach, this zone works better than the others for the Rojiblancos.

As the favourable area, the goalkeeper zone is the area that yields higher xG compared to other areas discussed above. However, teams can always increase the xG by improving their delivery to the box, their positioning and creating spaces via movements during the corners. In this area as well, Sevilla stand out, with an xG of 2.17. Similarly, Osasuna have an xG of 1.3 despite taking only 9 shots from the area.

Looking at the stacked diagram above, Real Madrid tend to be the most balanced side in term of the diversity of their corners’ endpoints. However, sides like Sevilla that often are able to win corners and land themselves in a good position to score stand out among teams like Barcelona, Real Betis and Real Madrid, who rather look to focus on the open play. Similarly, looking at the distribution of xG all around the designated areas, Osasuna look to be the sides that are able to create good chances from all the above-mentioned areas. Despite having a low sample size, Alaves, Celta de Vigo, and  Granada have been able to yield fairly good quality chances in comparison to the other league sides.

Although the above analysis was purely done with reference to the data, statistics, and the trend so far on how teams have approached their corner kicks depending on areas. Alternatively, the player abilities, defending strategies and movements have been neglected. The diagrams gave us a brief overview of teams that have done good so far and will be the ones to look out on corner once the play resumes.