How FC Barcelona became the King of Revenue

In early 2020, FC Barcelona was crowned the “King of Revenue” by the Deloitte Football Money League with a record of 840.8 million Euros registered in the 2018/2019 season. Although its strategic plan was only published in late 2015 to make it the most admired, adored and global sports institution, the beginning of Blaugrana‘s financial evolution dates back to 2003 with the entry of Joan Laporta and young entrepreneurs to the presidency in the elections with more participations until that date.

After winning the championship in 1998/1999, some disastrous seasons followed, culminating in a sixth place in La Liga in 2002/2003 (worst position since 1987/1988). The financial situation was not the best and the 123.4 million generated in 2002/2003, represented half the amount accumulated by clubs like Manchester United FC and almost represented the total salaries cost (88%). The debt had accumulated to probative levels. It was urgent to do something inside the club.

The elected management’s premises were spectacle football and social commitment, having chosen, instead of reducing costs, to follow a more aggressive approach in order to obtain results more quickly on and off the field.

As of the 2003/2004 season, the Spanish club started a process of diversification and internationalization of its revenues, allied to its sustainability, management capacity, and innovation. Although the financial results have been sustained in times of huge sporting success, such as those of 2008/2009 and 2014/2015, the club has been working towards increasing its revenues autonomy from performance on the field, with visible results. The chart below shows that, with the exception of the 2012/2013 and 2013/2014 seasons when growth was almost nil, FC Barcelona has grown its revenue exponentially with an average annual growth rate of 13%. 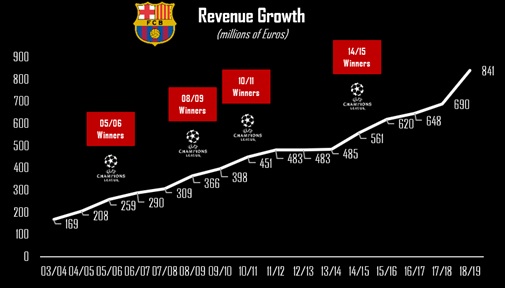 It is important to highlight the main events over the past few years to subsequently analyze the revenue streams and the club’s strategy.

Matchday revenues include ticket sales and Corporate hospitality and live above all from the degree of involvement between the club and the community. As mentioned above, after a negative period, the symbiosis between the club and the fans started to cement itself from 2003/2004 with the consequent increase in stadium attendances and number of members.

Throughout the seasons, FC Barcelona has innovated in product diversification in order to boost revenue by creating, for example, the Seient Lliure program that allows its members to resell their season ticket for a match they cannot attend receiving part of the sale and maximize club revenue. Another example, in terms of hospitality, is the VIP products sold by the club with differentiating experiences. It has also sought to have a huge network of salespeople in key positions covering all types of customers and segments and has recently introduced the dynamic pricing methodology which, according to the club itself, was largely responsible for the significant increase in matchday revenue recorded in 2018/2019.

Thus, this strategy has allowed Blaugrana to increase the profitability of Camp Nou’s seats, as can be seen in the graph below with the evolution of revenue per seat. It is expected that with the expansion of the stadium and the improvement of Corporate spaces, these values ​​will increase more. 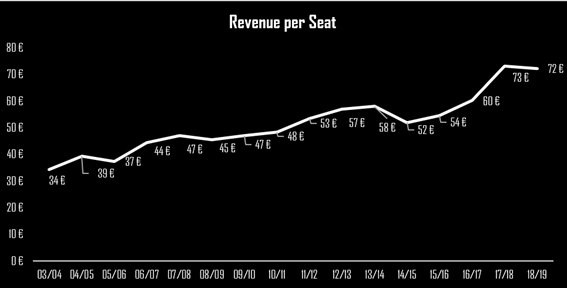 Until 2014/2015, FC Barcelona controlled and negotiated its TV rights. Thus, it explored its brand and largest audiences when negotiating with operators, like other clubs, as happened with Televisio de Catalunya and Mediapro. From the 2015/2016 season onwards, rights were centrally managed by La Liga. Although at the national level it is easier to control, these revenues are associated with sporting performance as they reach higher values ​​when campaigns in the UEFA Champions League assume greater success. Thus, although they have grown annually, there have been more significant increases in the years that FC Barcelona won the UCL, and also as a result of improvements in the commercial cycles celebrated between UEFA and its sponsors.

Commercial revenues include flows such as sponsorships, merchandising, and stadium tours. FC Barcelona’s strategy is largely related to this revenue stream. The Spanish club realized that the commercial component depends less on sporting success and can be boosted by the strength of its brand. Thus, over the period under review, it was able to improve existing agreements (e.g. Nike), sign new ones (e.g. Intel) and make two historic decisions with enormous financial impact: 1-sign a sponsorship agreement with a commercial entity for the front of its shirts; 2-take control of merchandising and licensing operations.

FC Barcelona assumes itself as one of the most desirable sports brands, aiming at its strategic plan 2015-2021 to become the most admired, adored, and global sporting institution of the planet. By keeping the existing commercial agreements, improving them and adding new ones, and exploring new commercial revenues such as, for example, the international pre-season tournaments, football schools, and the Barça Innovation Hub, it will certainly have all the possibilities to score this goal.

Strategy to increase the independence of revenues towards sports results

In 2003, with an even stronger focus from 2015 onwards, FC Barcelona realized that had to diversify and internationalize its revenues to be one step ahead of its competitors and be able to adapt itself to the market conditions, reducing their dependence towards broadcast revenues, and looking mainly at those streams under its control.

The strategic plan for the 2015-2021 period is based on five pillars: sporting excellence, social implication, patrimony (sports infrastructures/Espai Barça), global and brand positioning, financial management and sustainability. It aims to reach 1 billion Euros in revenue in the 2020/2021 season, which is entirely possible if the club manages to maintain the average annual growth rate of 13% shown in recent years.

Thus, the strategy is to continue growing its revenues regardless of whether the sports results are better or worse. In the chart below, we can see that the dependency is decreasing. In fact, although the percentage of wins has decreased in recent seasons, revenues have continued to increase significantly.

Finally, when we compare FC Barcelona with the other 9 clubs that were part of the Deloitte Football Money League between 2003/2004 and 2018/2019, we find that the Spanish club’s dependence on uncontrollable revenue streams in its total revenues, namely the broadcast ones, compared to the other clubs, is significantly lower. The chart below shows that while Blaugrana started to have commercial revenues as their main source (up 15%), the other clubs remain very dependent on broadcasting agreements, having even increased their weight in their overall revenues (3%). 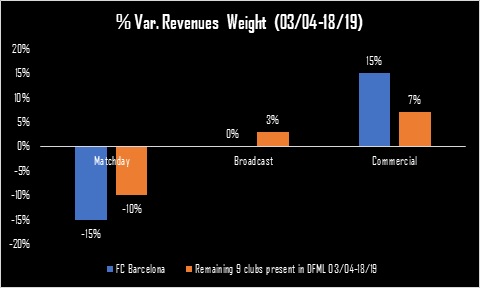 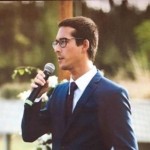 Passionate about numbers, always try to solve problems and make decisions based on analytics. Experienced business manager with a relevant background in the sports industry.