Barcelona are a team well-known for their renowned academy, La Masia, as the Catalans’ production lines is responsible for some of the best players to ever grace the footballing pitch, not just in La Liga, but across the globe.

But it’s been years since the golden generation conquered the world, clinching Champions League and domestic titles for Barcelona in its rampage, and there is a sense that the well has dried up just a little bit.

For that reason, this data analysis will use statistics to find the best talents currently at Barcelona B and use that data as a foundation for further tactical analysis over the next weeks.

Before we delve further into this data analysis, we must explain the metrics that will be used in detail. For this particular analysis, we’ve decided to take a look at all the Barcelona B players Wyscout have in their database for the 2019/20 season.

Since we are talking about really young prospects that play in a league not as widely covered, some of the data will be scarce and will undoubtedly skew our findings. So it’s important to note that we’ll only highlight the players who have played more than 500 minutes for Barcelona B this season and only the ones whose data set allows us to take a more in-depth look.

With that in mind, we’ve decided to look for the most proactive attacking-minded players in the squad, analysing their goal contribution, creativity, and ball progression to give us a clear picture of some of the most influential players the young Blaugrana squad has to offer. 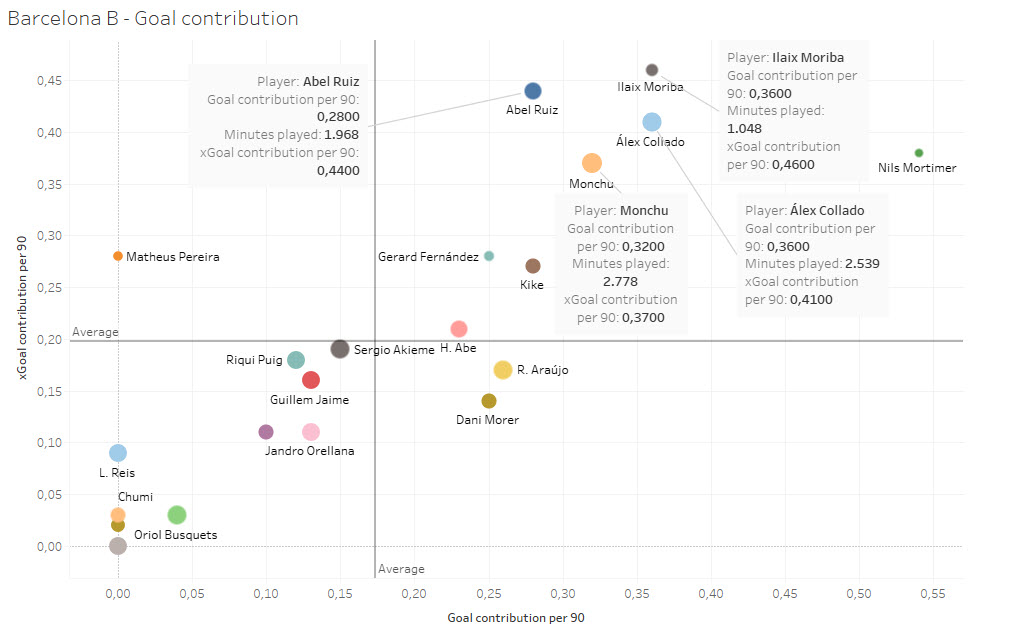 Immediately, we can see a couple of names that stand out in the scatter graph above. While Nils Mortimer has exceptional goal contributions in 2019/20, averaging 0.54 G+A per 90 minutes from 0.38 xG+A per 90, he has only played 500 minutes this season and will therefore not be included in the shortlist.

Álex Collado and Ilaix Moriba, however, are the other standout performers, tallying 0.36 goal contribution per 90 from 0.41 expected goal contribution per 90 and 0.36 from 0.46 respectively. Both values are above-average in both of the categories. Apart from them, Abel Ruiz (0.28 from 0.44) and Monchu (0.32 from 0.37) are also worth keeping an eye on.

It’s also interesting to note that neither of those players have outperformed their xGoal contributions. The ones to do that are Kike, Hiroki Abe, Ronald Araujo, and Dani Morer, with the latter two being defenders.

The next graph will deal with the best creative forces at Barcelona B by outlining their passes into the danger zone per 90 (passes into the final third per 90 combined with passes into the penalty area per 90) and key passes per 90 minutes. 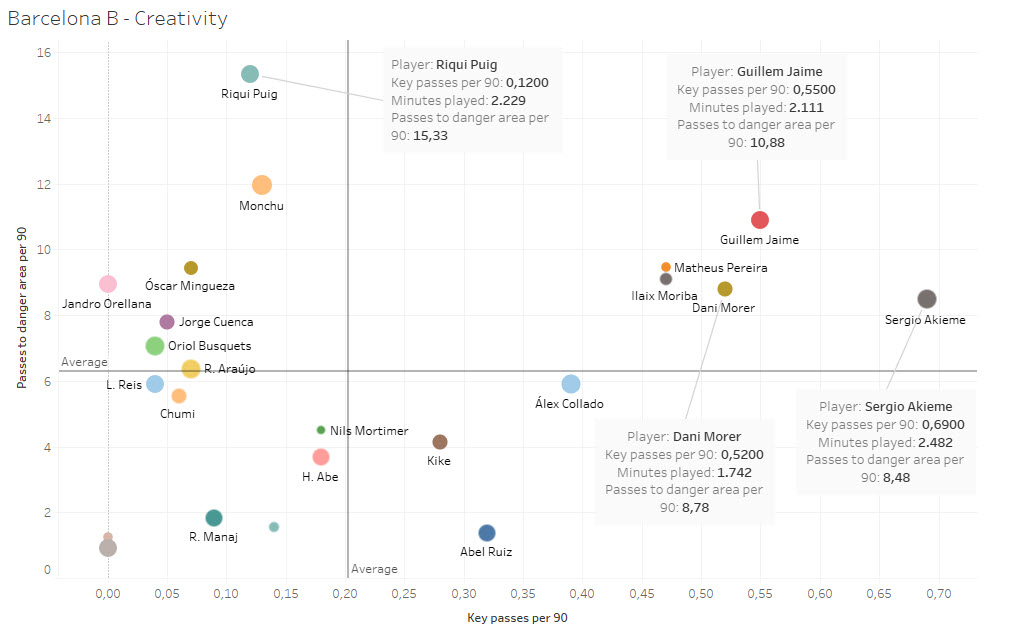 Now we get a completely different set of players. Riqui Puig is a name Barcelona supporters are well aware of and the 20-year-old midfielder has a particular skill set that benefits the Catalans. Puig averages 15.33 passes into the danger area per 90, which is miles ahead of the 6.30 that’s the average value of the squad. But interestingly enough, his 0.12 key passes per 90 are still below the average value of 0.20.

The other two names that stand out the most in the graph are Sergio Akieme and Guillem Jaime. Akieme is the most creative of the lot when it comes to key passes as he deployed the team-highest 0.69 per 90 along with 8.48 passes into the danger area per 90. Even though Jaime averages slightly fewer key passes per 90 with 0.55, his 10.88 passes into the danger area per 90 make up for the difference and put him in a “sweet spot” on the graph.

Still, Morer, Moriba, and Collado are also impressive in this metric despite the latter player tallying below-average passes into the danger area, which could be a direct result of his higher positioning on the pitch.

Finally, we’ll take a look at the best ball progressors in the squad, outlining their progressive actions per 90 (progressive runs combined with progressive passes per 90) and dribbles per 90 minutes. 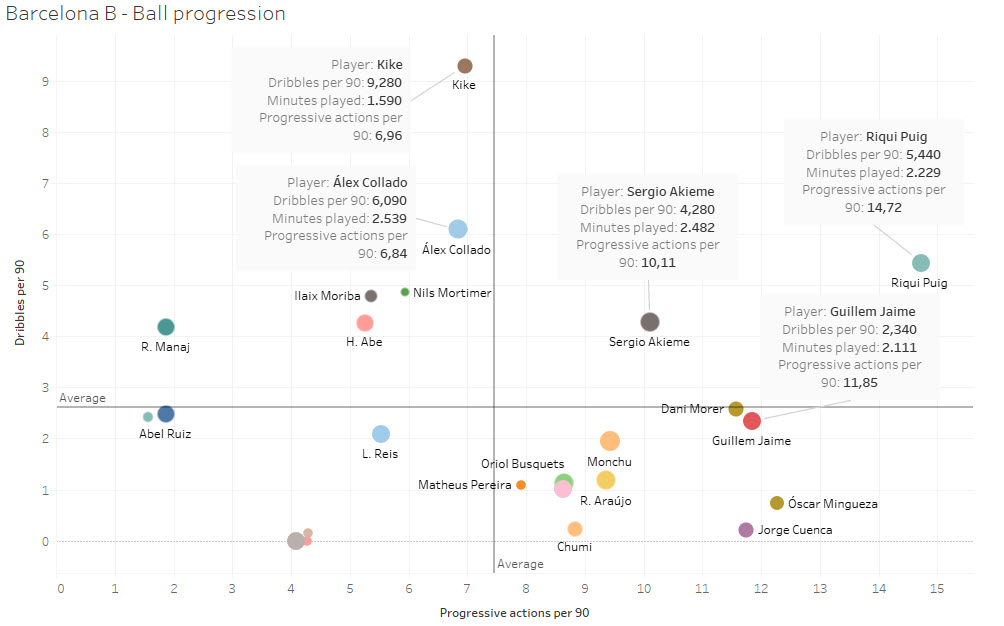 Once again, Puig is the standout performer and seems to be the best ball progressor at Barcelona B by some distance. The young midfielder averaged 14.72 progressive actions per 90 along with 5.44 dribbles per 90 as well.

Kike’s case is quite interesting as he averaged the team-highest value for dribbles per 90, tallying 9.28, but is just below-average in progressive actions per 90 with 6.96. This time, Akieme is close to that “sweet spot” with a nice ratio of 4.28 dribbles per 90 and 10.11 progressive actions per 90. Of course, both are lower than Puig’s but they’re still good enough to have an impact.

And yet Barcelona B have an abundance of great ball progressors in the squad as all of Jaime, Morer, Óscar Mingueza, and Jorge Cuenca eclipse the average value of 7.46 per 90 by some distance.

Next, we will highlight five of the best players that should be analysed further by using the data gathered and putting it into a tactical context.

Puig has already had some taste of the senior squad and it is still largely expected that he makes the step up sooner rather than later. The young midfielder is among the best ball progressors in the whole league, let alone at Barcelona B.

With 14.72 progressive actions per 90 minutes along with 15.33 passes into the danger zone, he is by far the most effective player in those metrics on this shortlist. And with 2.06 deep completions and 2.10 through passes per 90 minutes, we can also see that he is quite potent in that creator and distributor role. His final product is still not there but given his role in the squad, that is not a major issue at the moment.

As far as aggressive and progressive full-backs go, it seems that Akieme is settling quite nicely into that role. The 22-year-old excels in the offensive phase and likes to directly contribute to the attack as well. Interestingly enough, and as we’ve already seen in the scatter graphs earlier in this data analysis, Akieme’s tallies in expected goal contribution and actual goal contribution are both slightly below average.

But when it comes to progressing the ball and creativity, he is quite exceptional. His 0.69 key passes per 90 minutes mean he’s by far the most prolific among Barcelona B players in that category and his 8.48 passes into the danger area put him a good distance over the average line as well.

Jaime has spent time both as a right-back and as a right-winger throughout 2019/20 and that has inevitably had an impact on his stats. But even when he’s deployed in a more defensive role, the 21-year-old likes to bombard forward, similarly to Akieme, and connects well with his teammates up front.

His goal contributions are both below average but he clearly excels in both creativity and ball progression, as can be seen from the graphs and his stats below. His 11.85 progressive actions per 90 minutes are only behind Puig’s and Mingueza’s, taking into account the latter’s smaller minutes tally.

Similarly, his 0.55 key passes per 90 minutes mean only Akieme has a better value while only Puig and Monchu are better passers into the danger area.

Moriba is definitely a prospect well worth keeping a close eye on. The youngster is only 17 years of age and his game tally is slightly lower than the rest of his teammates on this list, but he still stands out for different reasons.

But Moriba is also highly creative, tallying above average key passes, passes into the danger area, and dribbles per 90 minutes. He is, however, below average when it comes to progressive actions but he more than just makes up for it in other areas.

And finally, we have Collado, a 21-year-old winger who is pretty close to the first-team already and could make that step up soon as well. And when we analyse his stats, it’s fairly easy to see why that is.

Collado’s goal contribution stands at 0.36 per 90 minutes, which is the same as Moriba’s but with a slightly lower expected goal contribution of 0.41. Still, from the players with significant game time this season, no one has a better value than Collado.

And with 0.39 key passes per 90 minutes and above-average dribble per 90 values, it is clear that the young winger can be a creative force as well as the one to put the finishing touches when necessary.

This data analysis has used statistics to find some of the best attacking and creative forces at Barcelona B. However, data can only tell us so much without a proper tactical context and for that reason, we’ll aim to further analyse all of the five shortlisted players before giving you the final verdict on their potential and overall ability.

Still, this is a solid foundation that can help us identify the players that have clearly stood out from the rest throughout 2019/20.