Ever since Dani Alves left the club, Barcelona were on a constant lookout for a potential heir to the Brazilian’s throne but their options were always deemed rather sub-par. From underwhelming acquisitions to failed academy prospects, the Catalans are still banging their heads against the wall when it comes to finding the right player for the role.

Before we delve further into the numbers and the metrics we’ll use, it’s important to note that we’ll only analyse right-backs under the age of 25 and players who have been deployed in that position multiple times in their respective leagues in the last calendar year.

When it comes to a Barcelona right-back, the Catalans will need someone with enough creativity and someone who’s confident and technical enough to be able to progress the ball up the pitch, either through his passing or piercing runs. With Lionel Messi still going strong on the right-wing and promptly cutting inside to his left foot, it will be the right-back’s role to keep the width and be able to overlap successfully.

For that reason, the two main metrics will be looking for in an ideal player for the role are ball progression and creativity, both of which will be explained more a bit later in this data analysis. But with Messi also not being the most avid of defenders, the right-back will have to be able to compensate for that lack of presence, both when pressing and winning duels.

Even though we won’t be taking the best defensive full-backs as potential targets, we will, however, try to find the ones that are efficient in attack and also offer adequate cover going the other way. After identifying the stand-out players across both metrics, we will then compare them to Barcelona’s two right-back choices – Nélson Semedo and Sergi Roberto.

The first graph deals with ball progression and to get the best performers in that area, we’ve combined progressive passes and progressive runs per 90 minutes with the accuracy of passes in the final third (%). 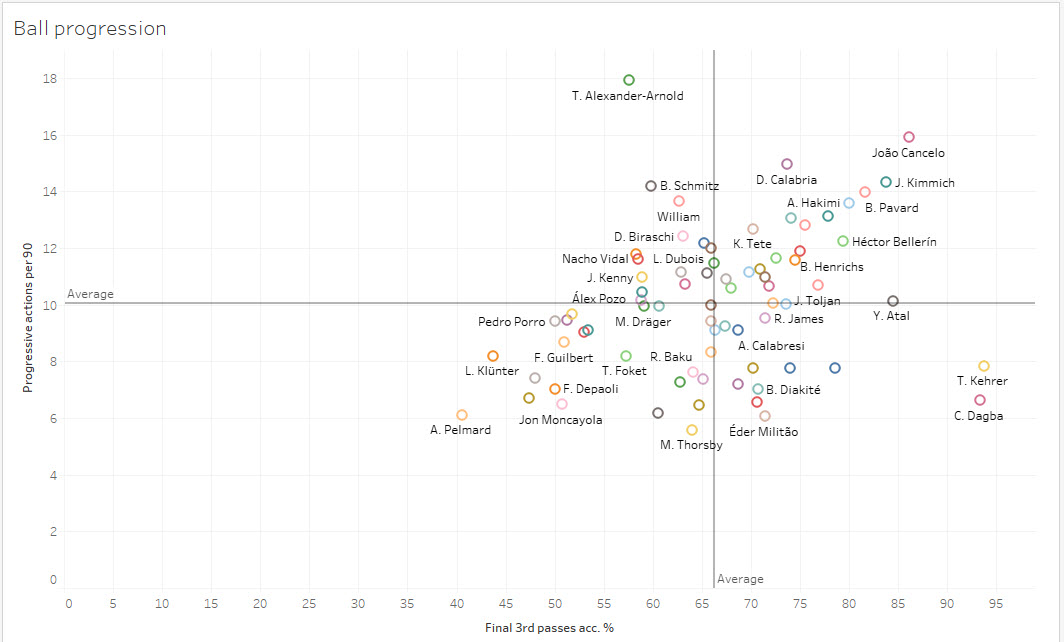 The role of a modern full-back is to progress the ball up the pitch effectively, either by running with it or by passing in the final third and beyond it. The ideal candidates are the players that excel in both areas; right-backs that have a high % of successful final third passes and also a high volume of progressive actions.

Right from the bat, Liverpool’s Trent Alexander-Arnold stands out as the player who progresses the ball the most as his progressive actions are off the charts (17.91). He is, however, not as accurate a final third passer as some of the other players with 57.58% accuracy, below the average of 66.24%.

João Cancelo of Manchester City, who is actually one of Barcelona’s reported targets, ranks quite high in this metric and can boast with above-average statistics in both progressive actions and final third passing accuracy, tallying 15.91 and 86.15%  respectively. The young right-back is then closely followed by Joshua Kimmich and Benjamin Pavard of Bayern Munich.

Both players are extremely secure on the ball but also have the ability to progress it either by running or passing. There are some other names like Davide Calabria but we’ll be looking for players that feature in both metrics and while the 23-year-old Milan full-back is a good and accurate progressor, he is not as creative in the danger area.

Borussia Dortmund’s Achraf Hakimi with 80% final third accuracy and 13.12 progressive actions per 90 minutes is another player who clearly excels in both categories in this graph and he’ll be one of the players studied a bit further down in this data analysis. 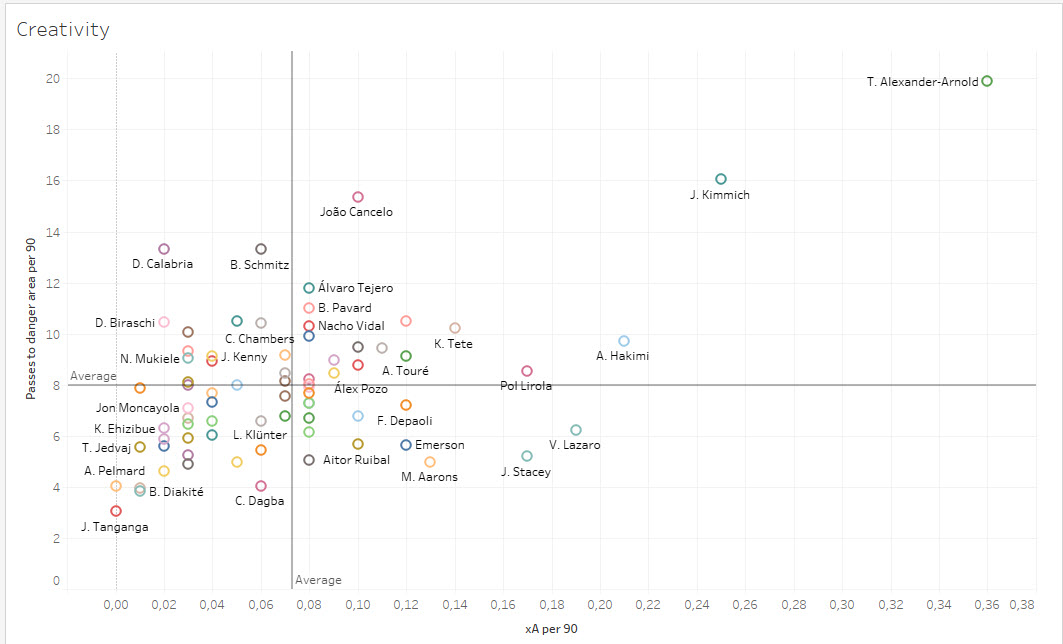 Unsurprisingly once again, Alexander-Arnold is the absolute machine when it comes to creativity and is miles ahead of the competition. His 19.88 passes into the danger area along with 0.36 xA per 90 minutes put him way above the average of 7.97 and 0.07 respectively. Still, there are some other players who are also quite impressive and are featuring once again.

Kimmich is a close second with 16.06 passes into the danger area and 0.25 xA per 90 minutes, both of which are exceptional metrics among young right-backs. But Cancelo and Hakimi are above average once again so they’ll be considered for the following section of our data analysis.

Interestingly enough, now we see some other names pop out as well. Valentino Lazaro, for example, is quite an interesting case as he has 0.19 xA per 90 minutes, which is the fourth-best value in the graph, but rarely passes into the danger area, suggesting he may prefer to stay higher up the pitch and has been used as a wing-back, wide midfielder and even a winger at Newcastle, skewing our findings a little bit.

Now, when comparing the players to Barcelona’s duo, we’ll look at the stats they’ve averaged across 2019/20.

It would be crazy to suggest that Barcelona sign Alexander-Arnold but it would also be wrong to blatantly ignore him. Since he is very much a benchmark in this role, it would be good to see how well do Semedo and Roberto compare to Liverpool’s young gem. Unsurprisingly, they don’t fare that well.

Alexander-Arnold is well ahead of both of them in terms of successful attacking actions, key passes, xA per 90, and progressive actions per 90 minutes. He is not as accurate  a passer with his 74.8% accuracy lower than both of Barcelona’s full-backs by some distance. The same can be said for his dribbling success rate which stands at 41.18%, which is far lower than Semedo’s and Roberto’s. 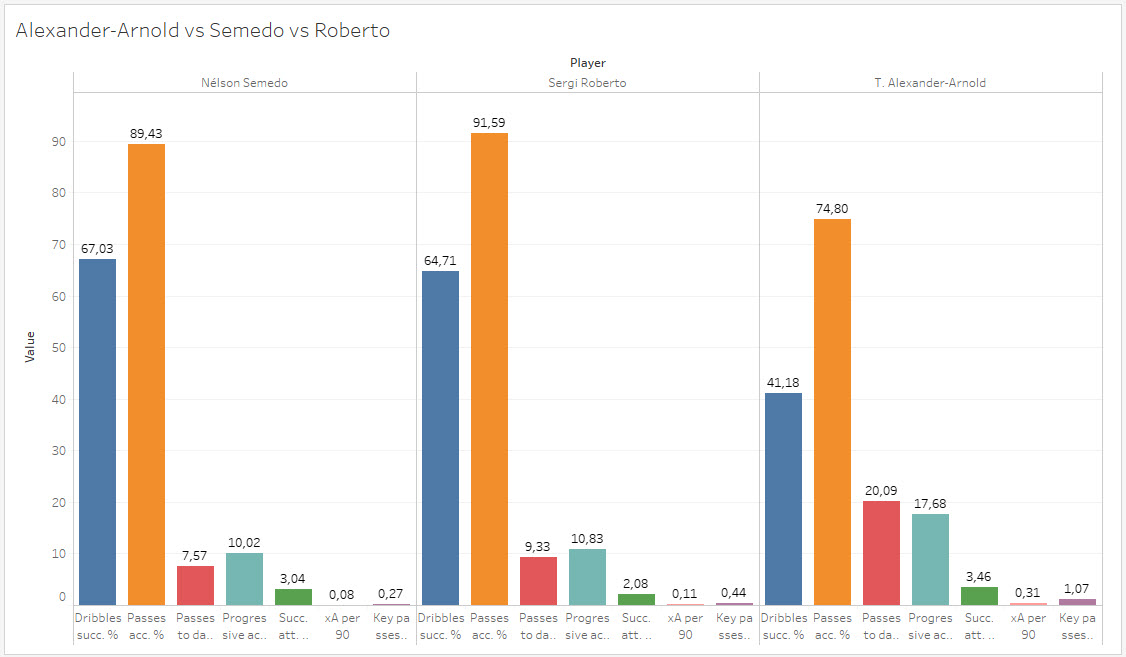 Another player unlikely to join Barcelona due to him still being a Real Madrid loanee but equally impressive in both metrics nonetheless. Hakimi has been a standout performer for Borussia Dortmund and should keep developing in the near future. Similarly to Alexander-Arnold, Hakimi’s passing accuracy (83.99%) and dribble success (57.07%) are still lower than both Barcelona players’ but he is superior in most other categories.

Roberto actually averages slightly more passes into the danger area with 9.33 compared to Hakimi’s 8.59 but Dortmund’s youngster edges both players out in successful attacking actions, xA per 90 minutes, key passes and progressive actions per 90 minutes. 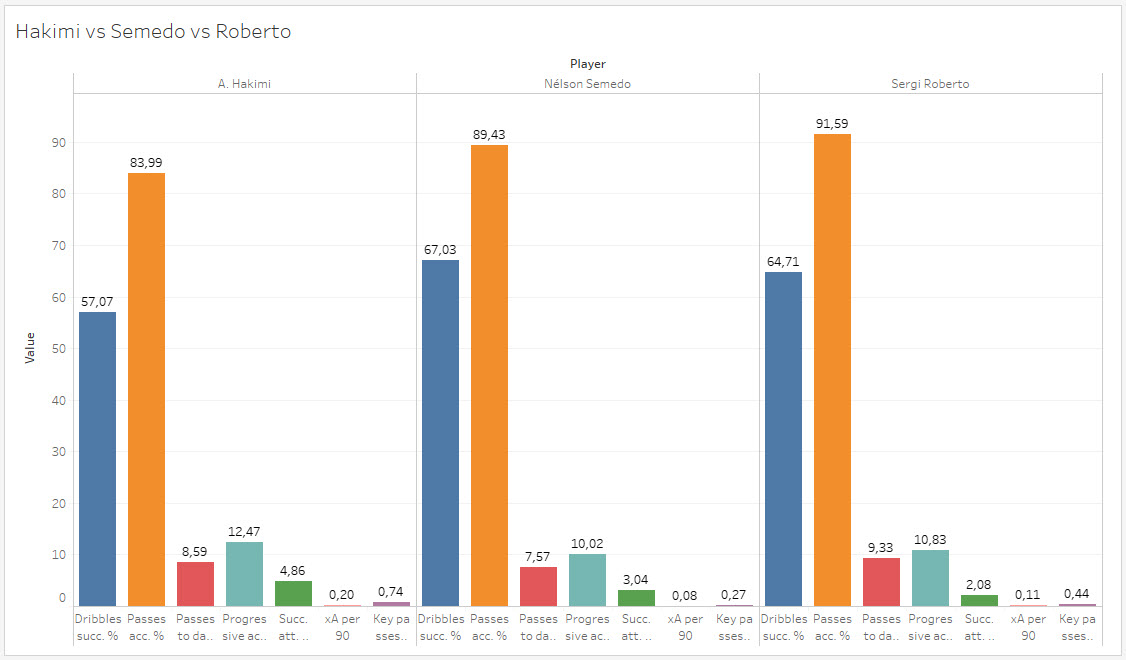 The third option would be an almost ideal solution for Barcelona as Kimmich is a player well versed in the positional play, an exceptional ball progressor and also more creative than the Catalans’ current options in the squad.

Of course, he is also a tough target to acquire but arguably more attainable than the previous two. Kimmich is miles ahead of Semedo and Roberto when it comes to ball progression and passes into the danger zone, and edges them out in successful attacking actions, key passes, and xA per 90 minutes.

But interestingly enough, he is above Semedo and only marginally behind Roberto in overall passing accuracy and just slightly behind both in dribble success, which makes him an extremely attractive option for the Blaugranas. Not to mention his 66.06% success rate in defensive duels is also above average but he does only engage in 5.74 per game. 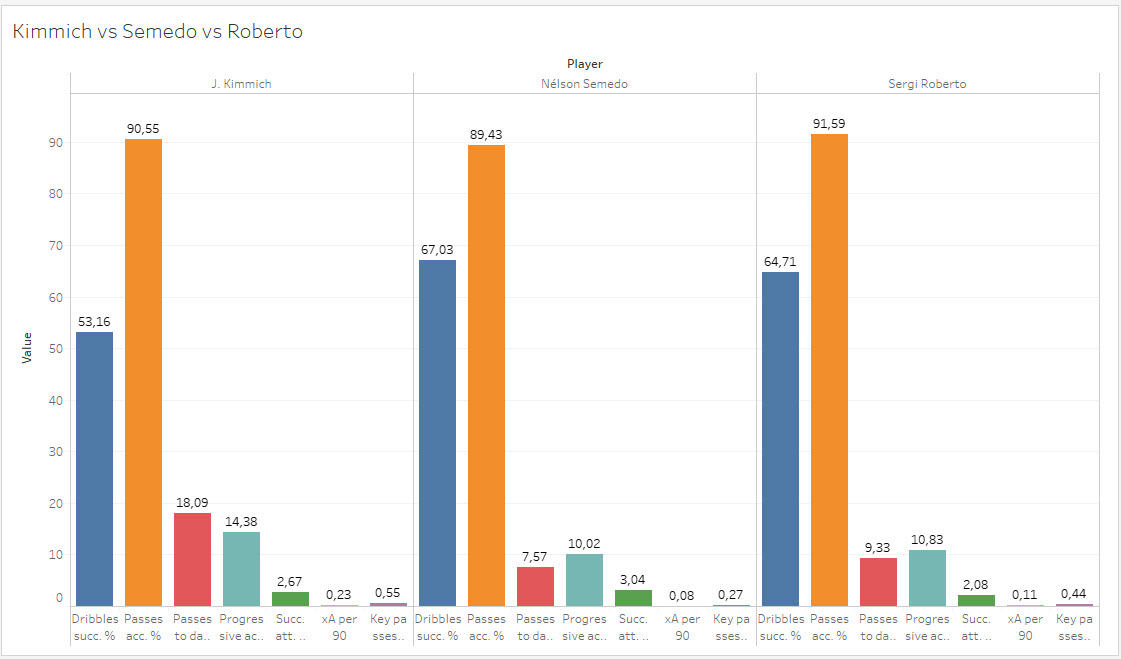 This is where the data analysis gets really interesting as we start to consider more realistic options given the state of both Barcelona’s wallet and the current market. Cancelo is reportedly being looked at in a potential swap deal with Semedo and as it stands right now, it seems that the two are really similar in some of the metrics presented.

The xA and key passes per 90 are practically indistinguishable and Roberto edges both of them out in those statistics but Cancelo is much better in progressing the ball and passing into the danger area. 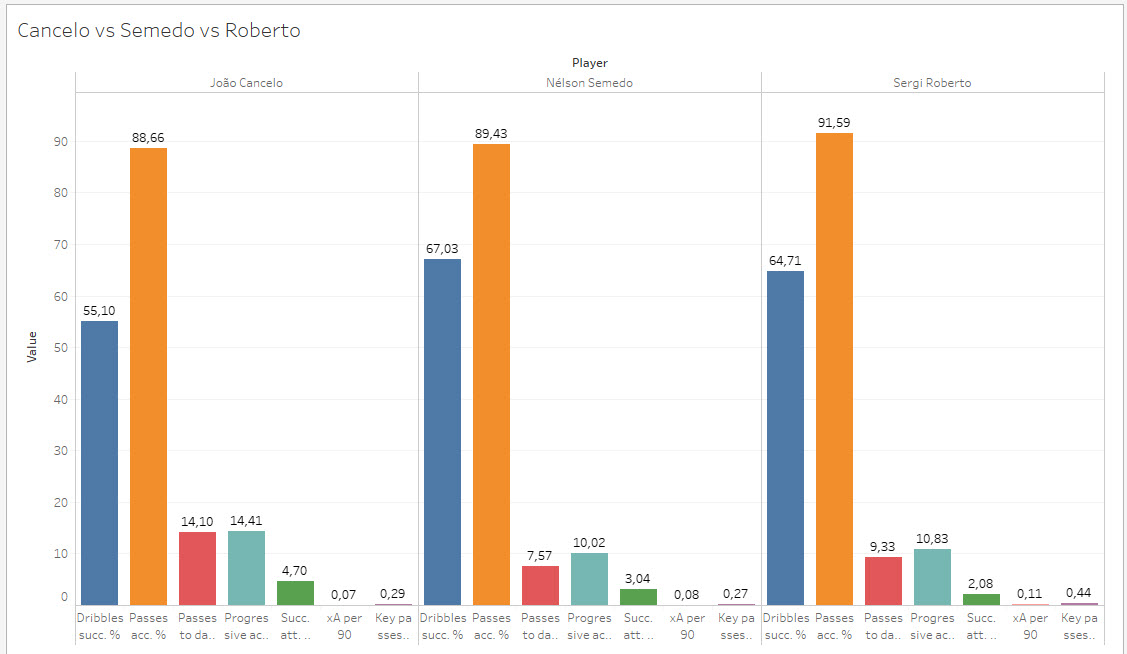 Lirola is an interesting pick out of the whole bunch. Even though he is not necessarily exceptional in either of the categories, he seems to be quite creative with 0.12 xA per 90 and 0.51 key passes per 90 minutes.

He can also boast with good dribbling abilities and decent progressive skills, slightly higher than both Semedo and Roberto, while also boasting with 8.78 passes into the danger area per 90 minutes.

Lirola, however, rarely engages in defensive duels with just 3.65 per game but wins 62% of all of them, which edges out both Barcelona players but with a smaller overall volume per 90 minutes. 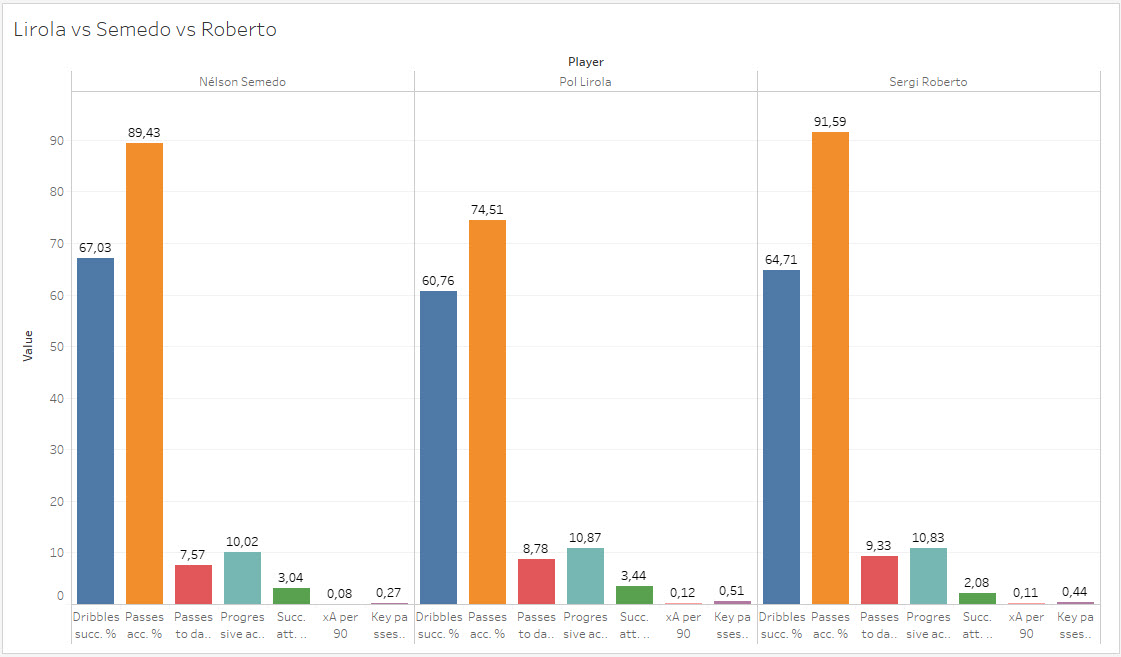 Tete is interesting for a number of reasons. Firstly, he ranked quite high in both ball progression and creativity, tallying 0.11 xA and 10.22 passes into the danger area, both above average, and also 12.68 progressive actions per 90 minutes and 70.21% pass accuracy in the final third, once again beating the average values.

With good dribbling and overall passing abilities, both of which trail behind the Barcelona duo due to them playing in a possession-dominant team, and a background in the Ajax academy, Tete could be an interesting prospect to look out for in the near future.

And with 7.54 defensive duels per 90 and 60.58% success rate, he has a good mix of defensive and offensive abilities that could still be ironed out if he is put in the right environment to thrive. 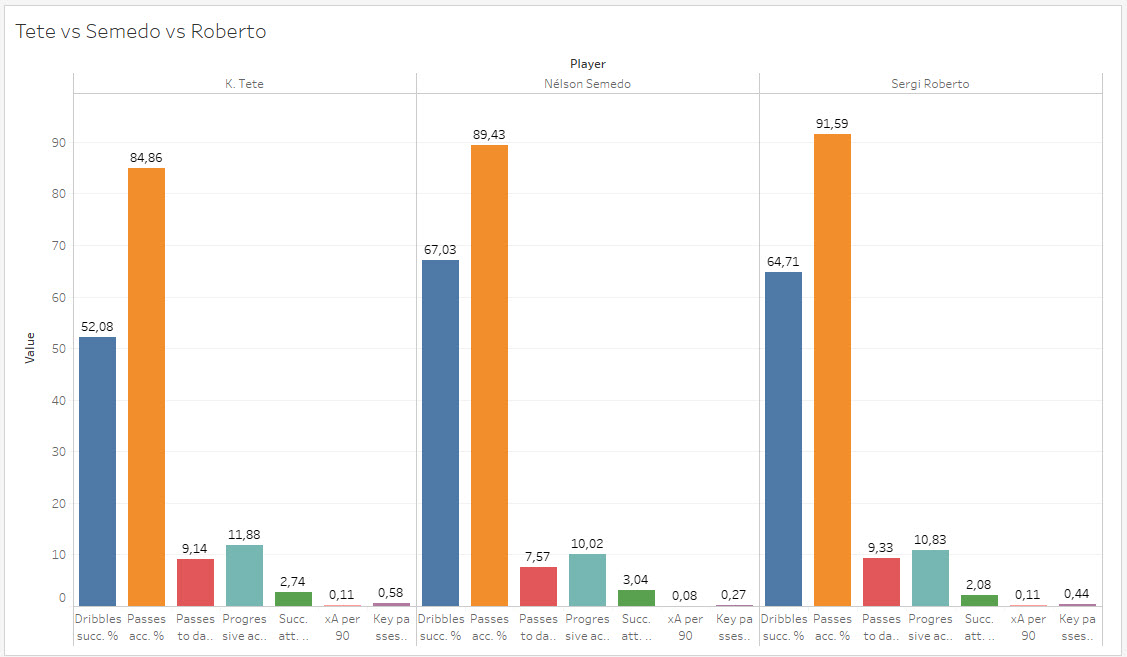 While the obvious best choices are unfortunately mostly unavailable or highly unrealistic, some players might prove to be a good fit regardless of their pedigree and reputation.

Cancelo looks like the most likely choice and while he may not necessarily represent a huge upgrade right from the bat, it would be an upgrade nonetheless simply because he offers a mixture of both Semedo and Roberto’s skill set as opposed to Barcelona having to switch between the two for different effects on the pitch.

Tete and Lirola are both interesting prospects and while they are unlikely to be considered, they could prove to grow into highly effective players if groomed properly. Kimmich remains a distant dream for Barcelona fans, and for good reason, while Alexander-Arnold and Hakimi would be ideal but their acquisition remains far from reach.