This is the final instalment of a three-part data analysis series that I have been writing this week concentrating on using data to identify potential strikers in the second tiers of the top 5 leagues. In the first part of the series, we were looking at potential targets in the centre of defence. That was followed by the second part in which we looked for a new central midfielder with a set profile to search for. The premise behind the series is simple, we have joined a new club as a recruitment analyst and we have been immediately set a task to identify targets for the upcoming transfer window. In order to achieve this, we are, in the first instance, using raw data to identify players that are performing well this season. This is not a means to produce a final list of recruitment target but rather to take a large set of players and filter it down to a more manageable shortlist that we can then drill down into using video and live scouting that go more into the tactics around each player.

We have applied certain filters to the data in order to concentrate our search. The first is obviously to only consider players in the second tier of England, France, Italy, Spain and Germany. We then filter the results to players who are under the age of 23 and who have played at least 1500 minutes so far this season.

In terms of the profile of the player that we are looking for it is reasonably simple. We want a player for the ‘9’ position who is capable of playing as a lone forward.

At the end of this data analysis, we plan to have a shortlist of five players that can be put forward for further checking.

The initial step to the process is to find and export the data that we want from Wyscout this data is then collated into a single spreadsheet with all of the players that we are potentially interested in. This data is then imported into the public version of Tableau and we can use the tools available there to produce visualisations that present our data. The result of this is below with a scatter graph. 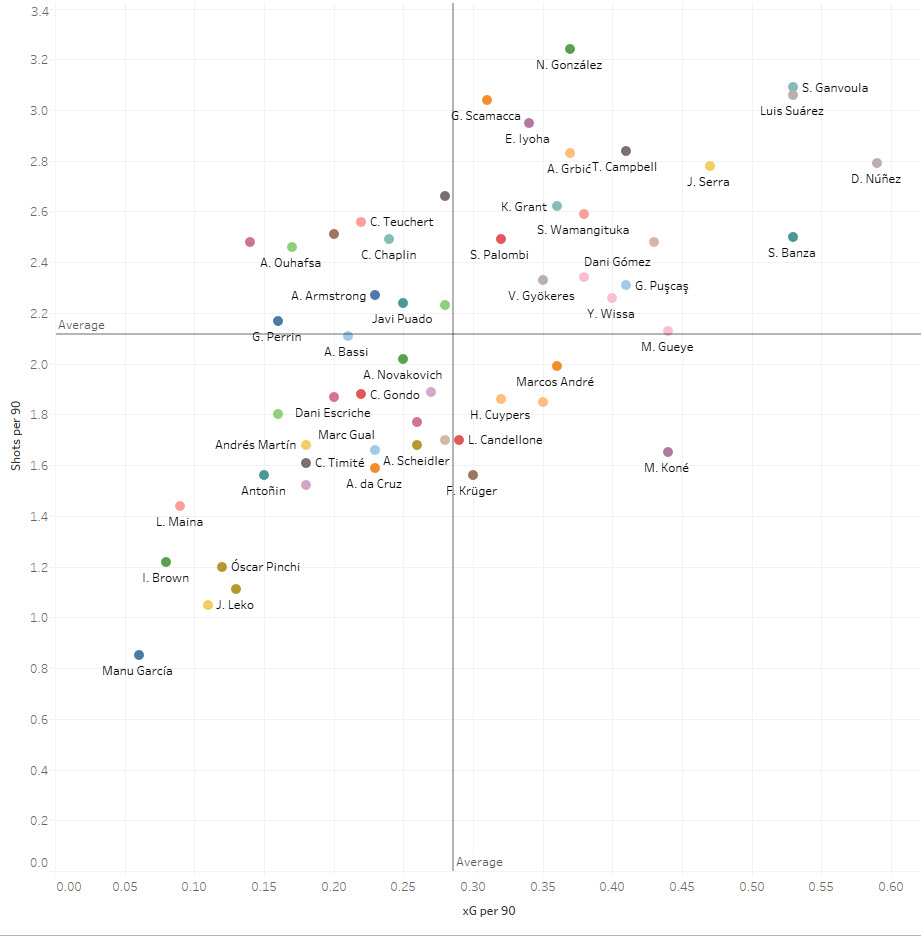 The first check that we run is a relatively simple one. We are comparing a player’s expected goals (xG) per 90 and their shots per 90. This is to look for players that are volume shooters who also shoot from good positions. The logic is that a player who takes more shots from positions that yield a high xG they should score more. This is especially true if you are able to identify players that meet these parameters that is playing for a weaker club. If you take that player and put him in a team with more talented teammates then the hope is that their statistical input can improve. 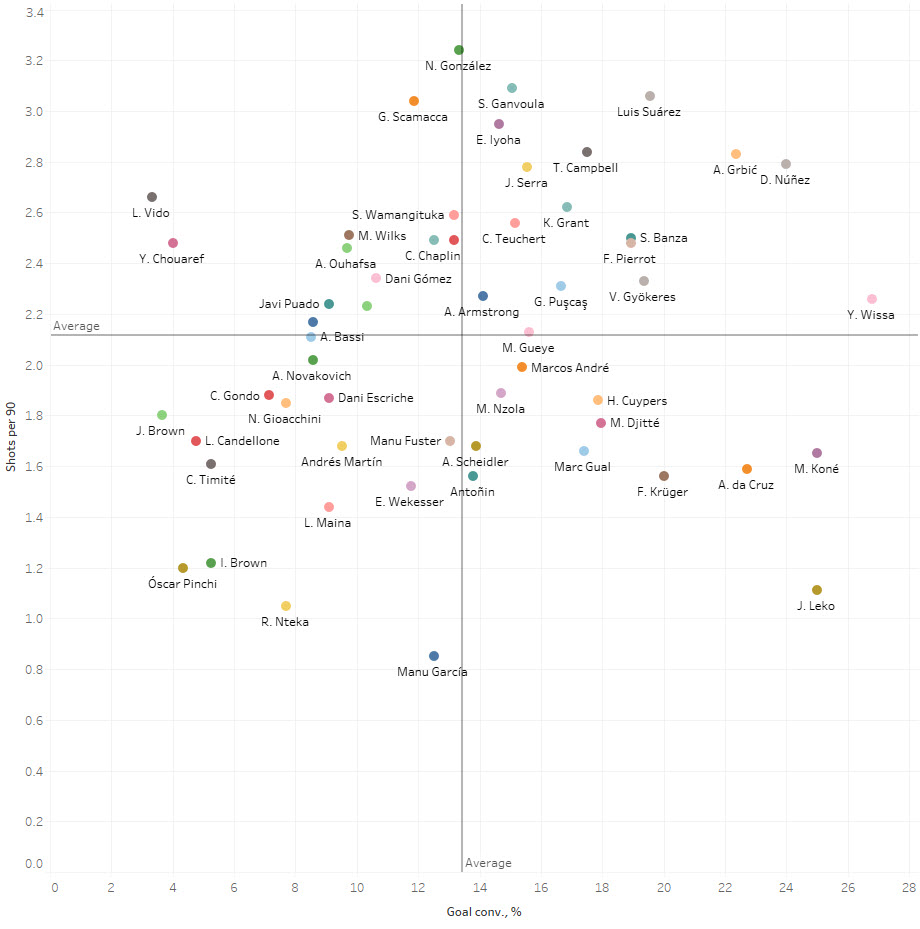 This time we are taking shots per 90, again, and comparing that with the % of shots that a player converts into goals. This gives a slightly different slant on the data as we start to consider which players can finish a high proportion of the shots that they take. Once again we are looking to build a picture of the players that we could take and improve their shot locations. 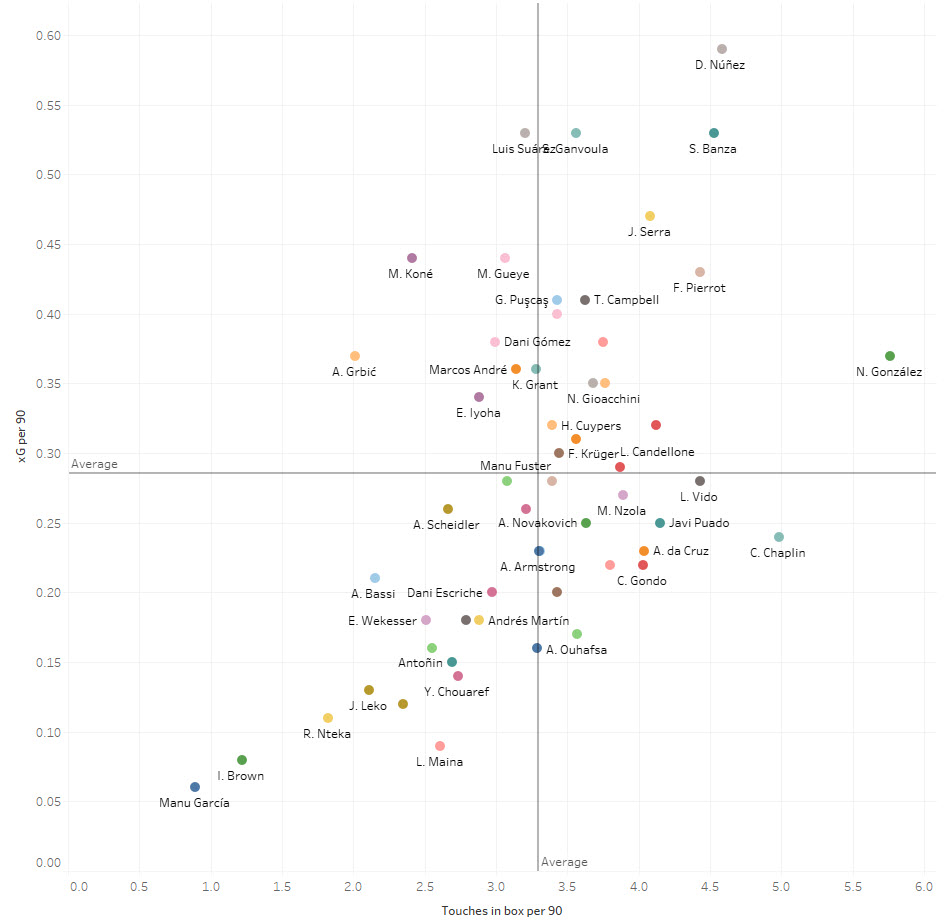 The final look at the data in this manner is something that I like to use when looking for a fixed striker and that is to compare touches in the opposition area per 90 and xG per 90.

Our next step is to identify the players that we have discussed that will be shortlisted to take forward to the next stage.

Darwin Nunez is, for me, the standout player. He is currently outperforming his xG with an xG of 0.59 and 0.67 goals per 90. He takes a lot of shots, 2.79 per 90, and has a decent conversion rate of 24%. He averages 4.58 touches in the penalty area per 90 but also attempts 3.79 dribbles per 90 minutes. Nunez is extremely effective at attacking in transition and leads the line well for his team.

Silvere Ganvoula at Bochum is also an interesting player. He is currently underperforming his xG with 0.47 shots per 90 from an xG of 0.53 per 90. He is taking 3.09 shots per 90 but his goal conversion lets him down at 15.07%. He averages 3.56 touches in the opposition box but attempts an impressive 4.36 dribbles per 90 minutes. Ganvoula plays more as a target striker that looks to hold up the ball and bring others into the game.

Luis Suarez is the next player to make it on to our shortlist and as with Darwin Nunez, he is outperforming his xG. His current xG is sitting at 0.53 with 0.60 goals per 90. He is taking 3.06 shots per 90 with a conversion rate of 19.54. He is capable of leading the line or playing as the second striker attacking from a slightly withdrawn position. He is a dangerous carrier of the ball and is averaging 5.45 dribbles per 90 minutes.

Simon Banza is a player that I have been tracking for a while. He is currently underperforming his xG with 0.43 goals per 90 compared with an xG of 0.47. His shots per 90 are relatively low at 2.78  but he has a decent conversion rate of 15.56%. His 4.08 touches in the opposition box are unsurprising given his tendency to look to lead the line for his side.

I have included Yoane Wissa in this list because I find his versatility and skill set fascinating. He is outperforming his xG with 0.61 goals per 90 from an xG of 0.40. This could partially be explained by his tendency to shoot from the corner of the penalty area having cut inside from the left-hand side onto his right foot. He is taking 2.26 shots per 90 with an impressive conversion rate of 26.79%. He also attempts 4.36 dribbles per 90 minutes. Wissa plays predominantly from the left-side but I feel that he is capable of leading the line and would prove dangerous when moving from deeper areas and threatening to break the defensive line of the opposition.

So, there we have it. A shortlist of five attacking players that have interesting data so far this season. They all provide slightly different skill sets but are ready for the next step in their careers. We would then look to provide this list to our scouts and video scouts who would start to monitor them and build out a report with data as the basis.