This is the second part of a three-part series that I am currently writing looking at recruitment from the second tiers of the top 5 leagues. The premise of this series is that we have just joined a club who are looking to recruit for three key positions. In the first part of the series, we covered the central defenders, here we will look for central midfielders and the final part will see us look for a goalscorer. In order to do this we are using data to identify shortlists of players for each position that we will then look into in more depth. The data is extracted from Wyscout and is filtered to show only players that are 23 years old or younger and that have played at least 1500 minutes this season.

In terms of the players that we are looking for, we have been asked to identify potential targets for two roles within the centre of the midfield. The first is a player who can play as the ‘6’ at the base of the midfield but who can progress the ball cleanly through the thirds of the pitch. The second is a player to occupy more advanced areas as an ‘8’ who can carry the ball and create in the final third. The aim is to show you how we can read the same data sets to identify players with different skill sets that can match what we are looking for.

At the end of this data analysis, we should have a shortlist of five players that we have identified and provided more in-depth insight into. Those players would then go forward to be discussed and checked by other staff within the recruitment process.

A lot of people ask how these pieces and the graphics within them are produced so we will take you behind the curtain to an extent. The data for each of the five leagues that we are looking at is extracted from Wyscout and then collated into a single spreadsheet. That spreadsheet can then be uploaded to Tableau public and we can manipulate the data set from there. That leads to the following. 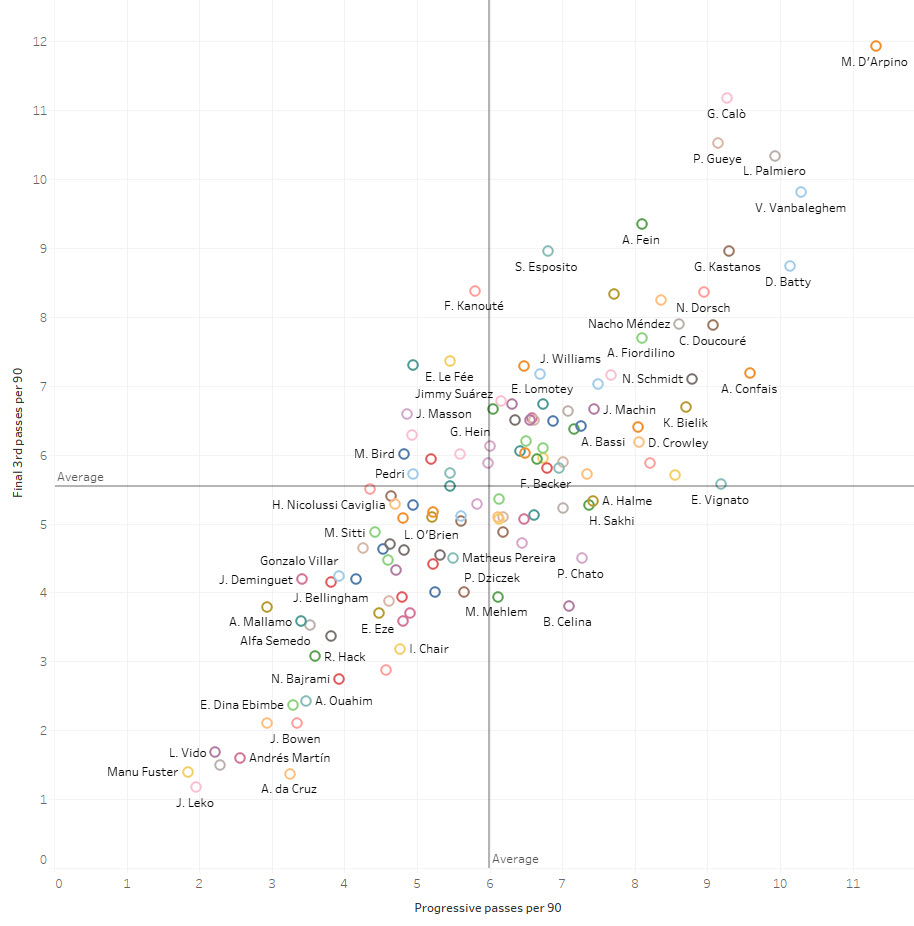 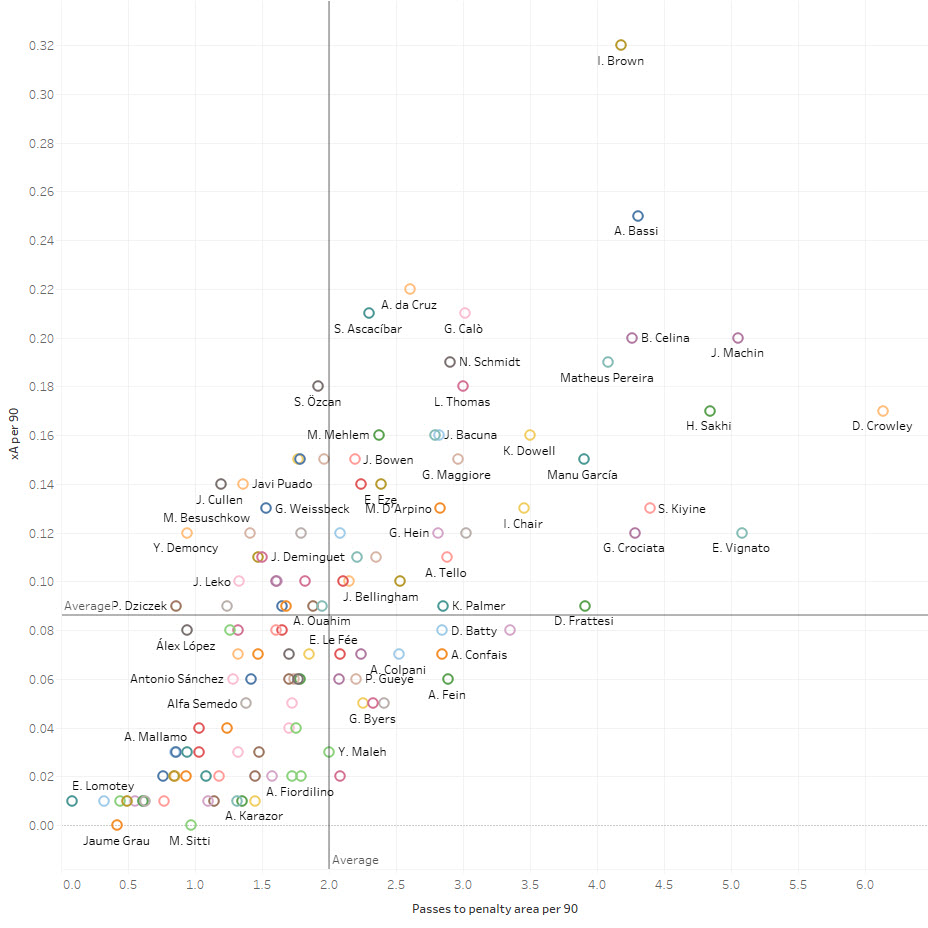 The next step is to start looking for players who are effective in the final third. To do this in the first instance we will look at expected assists (xA) per 90 minutes and passes to the penalty area per 90 minutes. We are looking for players who progress the ball dangerously in the final third and who create a high number of chances for teammates in the penalty area. As I touched upon in the first part of this series we need to be careful when using data in this manner. We are looking to identify potential targets to shortlist and examine further but we need to be careful not to include players who do not fit the roles that we are looking for. Take Izzy Brown of Luton town, on loan from Chelsa, he looks to be the clear standout but Brown has also played as a striker and a wide midfielder and does not fit the brief.

The next step is to identify which five players we want to shortlist and drill a little deeper into the data for them. This is generally a precursor to having them followed up on by video or live scouts.

First up is the 23-year-old French midfielder Maxime D’Arpino who would be the first choice as the passing ‘6’ for me. D’Arpino is the very definition of a progressive passer and he tends to receive the ball as part of a double pivot in the Orleans midfield before looking to play his passes immediately forward. We have already mentioned his 11.32 progressive passes and 11.93 passes to the final third per 90 minutes. We also see that he has 22.36 forward passes per 90 and 2.83 passes to the penalty area per 90. D’Arpino is likely to move on this coming summer and despite concerns over his physicality, he is still ready for a step up.

Next, we have Giacomo Calo at Juve Stabia. He is another player who is primarily a ‘6’ and despite the fact that he is owned by Genoa he is still an interesting target. Capable of playing as a single pivot or as part of a double pivot Calo is tactically versatile. He has 9.27 progressive passes and 11.18 passes to the final third per 90. He also has 18.22 forward passes per 90 and 3.01 passes to the penalty area per 90.

Out of all of the players on our shortlist, Pape Gueye has the most intriguing physical profile and he looks capable of bridging the gap between the two roles and playing either as the ‘8’ or as the ‘6’. He has 9.15 progressive passes and 10.52 passes to the penalty area per 90. He also has 16.72 forward passes and, intriguingly, 1.81 dribbles per 90.

Amine Bassi is very much a creator rather than a progressive passer and he comes alive in the final third. He is 22-years-old and likely to move on from Nancy at the end of the season. He has 4.3 passes to the penalty area per 90 and 0.25 xA per 90. He also has 2.69 dribbles per 90 and can carry the ball dangerously in and around the penalty area.

The final player on our list is the former Manchester City midfielder Manu Garcia. Currently, in his first season with Sporting Gijon, there is a possibility that the cost of signing this player could be prohibitive. Manu Garcia has 3.9 passes to the penalty area per 90 and 2.91 through balls per 90. Most interestingly he has 5 dribbles per 90 minutes and is extremely dangerous when carrying the ball. 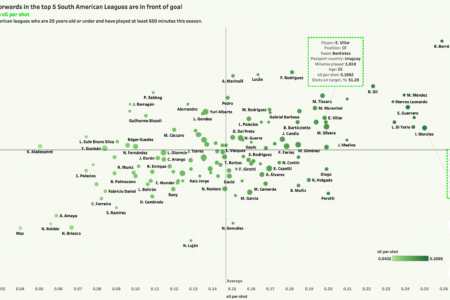