With no football currently being played and no sign of domestic or European football resuming we are likely to see entire coaching staffs working on recruitment, via video scouting, as they are unable to get out on the pitch to train. I felt as though now would be a good time to release a series of data analysis pieces that look at potential recruitment targets in the second tiers of Europe’s top 5 leagues. There will be three pieces in total that are all released in the next week looking at three specific position groups. As with previous data analysis pieces that I have written for this site I am specifically scouting for certain roles to fit within a tactical system.

To begin we are looking for a new central defender. The team that I have joined are looking to recruit a young central defender that can fit into their possession orientated system. This player will have to be comfortable progressing the ball from the back and given the fact they play a high defensive line he will have to be able to defend when isolated against the opposition as they look to transition to attack.

I will be using data to look at players in the second tiers of England, France, Germany, Italy and Spain in this piece. I have set filters that dictate that these players will be twenty-three or younger and that they will have played at least 1500 minutes so far this season. The next step was to combine all of the results into one list and then start to compare certain data sets against each other to get an idea of performance so far this season. From there I will produce a set of five players that I would be putting forward to the next stage of the recruitment process.

The idea behind this tactical analysis is to provide an example of how I use data to identify interesting players. Interestingly one of the players that I end up with on my shortlist is currently on loan from Brighton and Hove Albion, and it’s not the one that you are all thinking of.

In the initial stages, I will export the data sets that I am interested in from Wyscout and then create a single spreadsheet with all of this information collated. The next step is to take that data and import it into the program that I use in order to manipulate the data which in this instance is Tableau. Given that I am recruiting for a possession orientated team the first thing that we will examine will be advanced passing statistics. 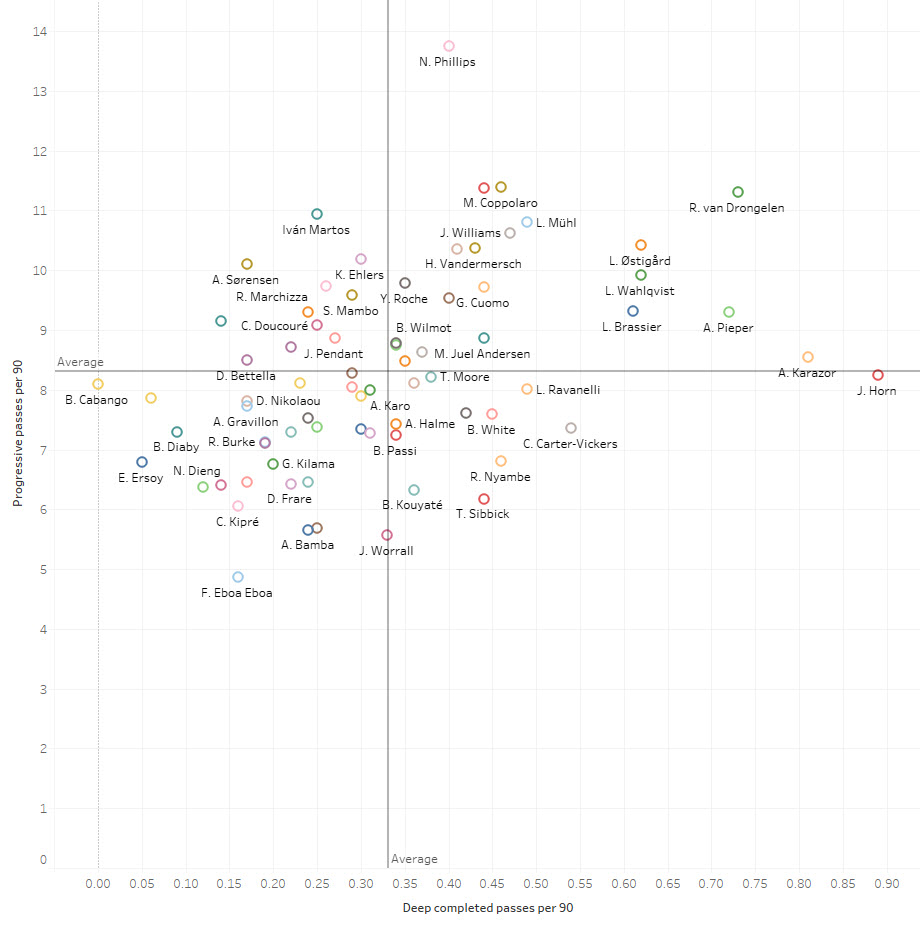 The first thing that I should point out at this stage is that you have to be careful when presented with data like this. We are looking for a central defender and as such when applying filters to the data on Wyscout. I selected to see data for all players that meet our criteria of age and minutes played that have played at centre-back this season. This, however, dilutes our data slightly as players who are normally fullbacks but have played at centre-back this season will appear in our search. Take Jannes Horn for example. He shows up well in the data set with the highest number of deep completed passes per 90 minutes and is just below the average line for progressive passes per 90 minutes. However, Horn plays mostly as a left-back for Hannover 96. 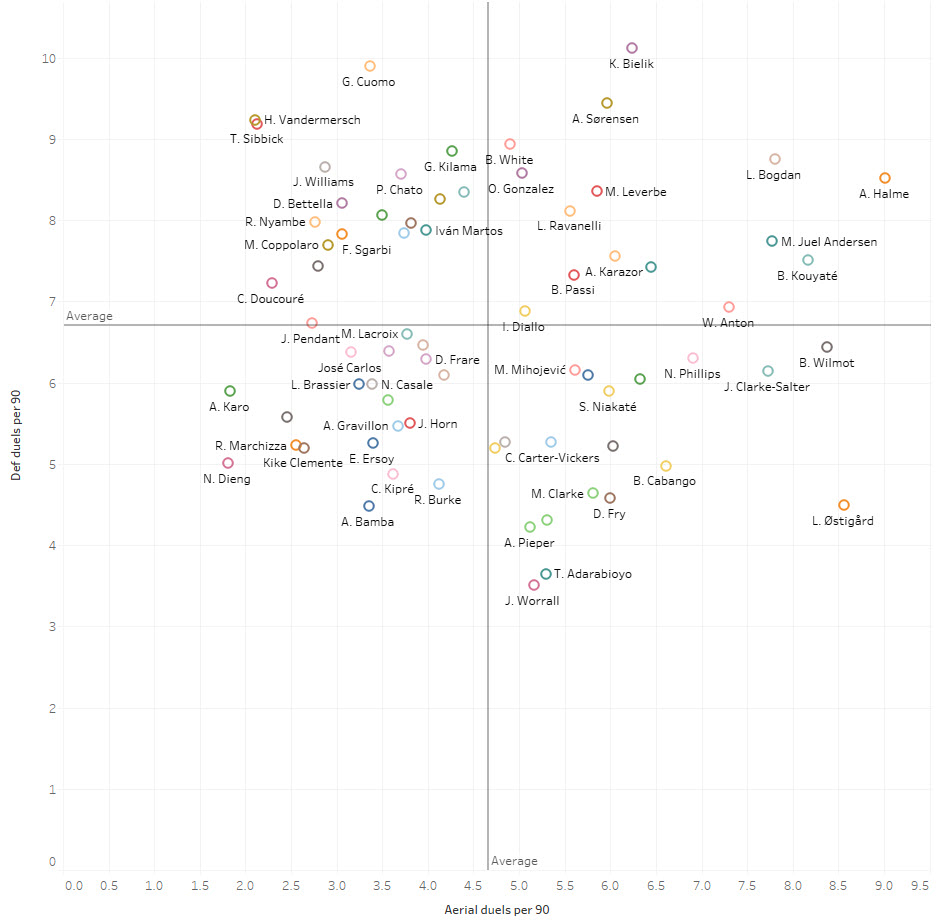 The next step is to look at the volume of defensive duels that each player has had so far this season. We do this by comparing defensive duels per 90 and aerial duels per 90. This is probably a good point to discuss the next thing to keep in mind when doing data analysis in this manner. Raw data does not take into account the general style of play for a team. A player in a side that plays in a deep compact block is likely to have less defensive duels than a player that plays in a system with a high defensive line that leaves him more exposed. You should always be open-minded when using data in this manner. 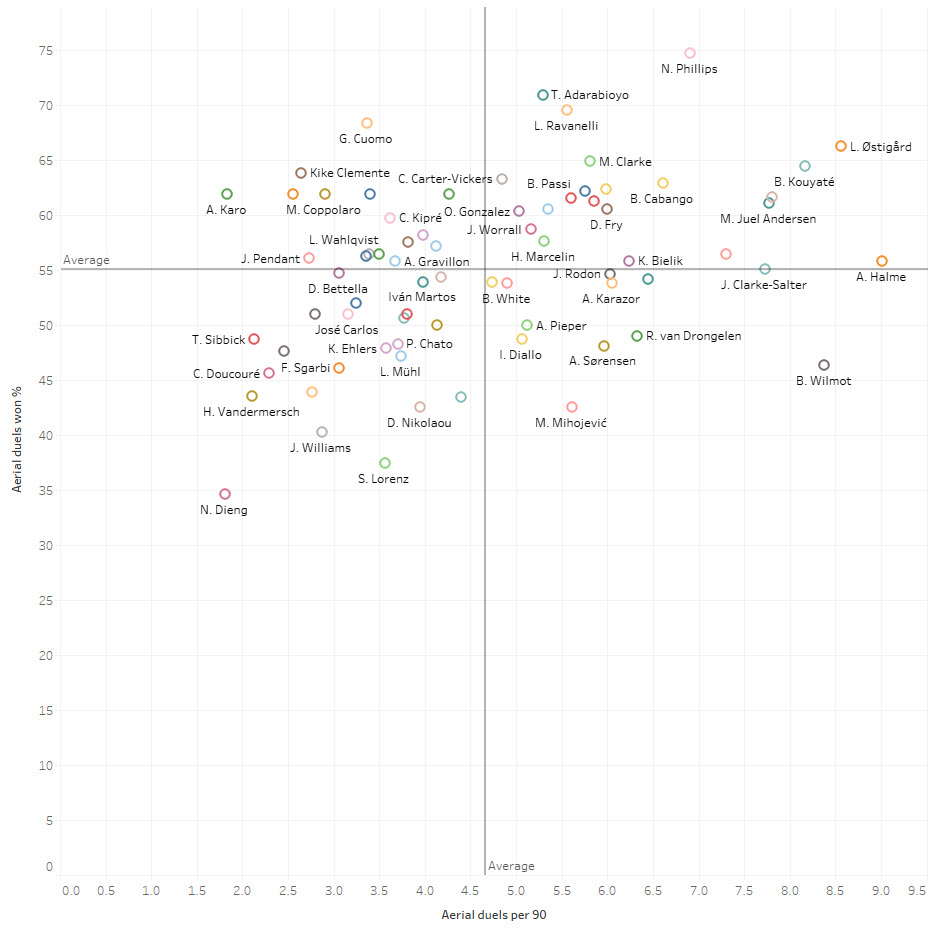 The next step is to drill down further into the data of some of the players that have caught my eye. This is simply to add a little more context to what we have seen so far before going even deeper with video reports.

First up is the St Pauli defender Leo Ostigard who is, once again, on loan from Brighton. Ostigard stands out for his ability with the ball at his feet and for his strength in the air. 10.42 progressive passes per 90 minutes are combined with 5.83 final third passes per 90 minutes. He is a tall and angular central defender who is deceptively quick when covering ground over longer distances of moving to challenge aggressively in short spaces. It is his ability on the ball that stands out, however, and not only does he display the ability to switch the play through diagonal passes but also he has the ability to play driven passes into the feet of the forwards through the lines of the opposition defensive block.

Next up is the 22-year-old Malian international Boubacar Kouyate. The young defender moved to France from Sporting CP in Portugal in January 2019 and this season has firmly established himself as a first-team regular. Troyes are not a progressive team in terms of their build-up play and as such Kouyate’s passing numbers are a little lower than Ostigard. Where he stands out, however, is the quality of his defensive duels. 8.17 aerial duels and 7.51 defensive duels per 90 are impressive numbers. Kouyate is a quick and powerful defender and although Troyes do not play with a high defensive line his skillset should transfer across easily enough.

Lukas Muhl is a 23-year-old German central defender who is currently playing in Germany with FC Nurnberg. Capable of playing as a fullback of at the base of a midfield three Muhl is more natural as a central defender. As with the other players on our list, Muhl covers ground well and would fit with our defensive model of playing with a high line. His aerial duels at 3.74 per 90 are low but once again that could be a result of the style of play at his current club. Muhl stands out in possession of the ball and 10.8 progressive passes per 90 and 7.2 passes into the penalty area per 90 are impressive.

Luka Bogdan is a 6ft5 Croatian central defender who, at 23-years-old, is already at his third Italian club with Livorno. Out of the five players on our list, Bogdan is perhaps the most well rounded in terms of his defensive outputs. His defensive numbers are 7.8 aerial duels per 90 and 8.75 defensive duels per 90. In possession, he has 8.12 progressive passes per 90 and 6.3 passes to the penalty area per 90.

Aapo Halme is a 21-year-old Finnish defender currently playing for Barnsley in the English Championship. He originally moved from HJK Helsinki to join Leeds United in 2018 but he suffered a significant injury which slowed his development. This past summer saw Barnsley lose key defensive players in Ethan Pinnock, to Brentford, and Liam Lindsay, to Stoke, and their recruitment team identified Halme as the perfect replacement. 9.01 defensive duels and 8.52 aerial duels per 90 show his defensive strength.

The next step, as a recruitment analyst, would be to put these five players along with any others that interest us from the data onto a watch list. This would then allow them to be watched by different people to create a more comprehensive report.

Now that we have our initial list of five central defenders the next step will be to move on to central midfielders. I hope that within this piece I have given you an idea of some of the difficulties when using data as well as some of the methods that I would use. Part two will be on the site later on this week.