Now that the January transfer window has closed clubs can take a breath and reflect on those deals that they were able, and in some cases, unable to do. In football, however, there is no true break and clubs that recruit intelligently and that work to a clear plan will be constantly reassessing potential targets that meet their recruitment criteria. In order to manage this need for constant recruitment analysis smart teams will assign their analysts with tasks that include checking and updating data on players in markets that interest them. An important part of running a recruitment department in this way is understanding which markets are accessible to your club, based on your budget, and knowing which of these markets has a tendency for developing talented players.

Sometimes requests from coaching staff or directors can be slightly unhelpful, I was once asked by one club to identify a tall striker for their club. No context, no player profile just a very basic physical description. These kinds of requests are, of course, extremely unhelpful and indeed inefficient as in order to recruit effectively you need to have at least a framework of a profile that explains what kind of player you are looking for and what kind of role they will play in the team from a tactical point of view.

It is easy to get lost in data. There is so much available from a variety of data providers and you have to understand how to access the key parts of these data sets to fit your own needs. In order to explain this concept more thoroughly, I have created a scenario for myself in which the head of recruitment has tasked me to run data searches for players from Scandinavia. The broad stroke of this enquiry is that the club are looking to build a knowledge base on central midfielders in the region and the head of recruitment has provided three basic player profiles that the club will look to use going forward. The first is for a creative midfielder that can play as an ‘8’ or a ’10’ and that creates chances for teammates. The second if for a ball progressor who stands out either in terms of driving forward with the ball or playing progressive passes that threaten the opposition penalty area and the third is to find a high volume passer who is also capable of playing forward.

The purpose of this data analysis is to provide a framework to show the initial stages that I would go through to begin to provide a shortlist for further examination. This is in no way intended as a tool to provide a definitive list of targets and there would need to be further data analysis on each player followed by video and live scouting before a decision could be made. 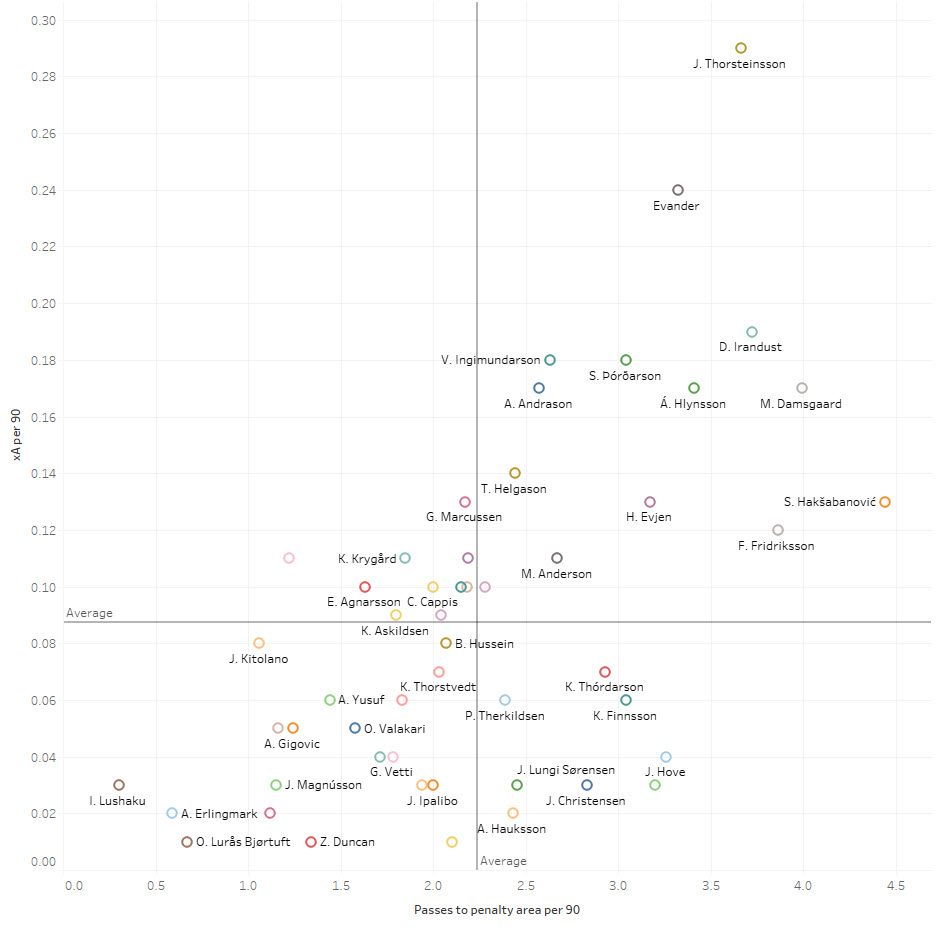 For the purposes of this search certain criteria have been put in place. We are looking for young players with development potential and as such the maximum age has been set at 22. We are also looking for players who can provide a reasonable sample size and as such only players who have played at least 600 minutes will be considered. In order to identify the creative midfielders in the first instance, we create a simple data query that isolates the number of passes played into the penalty area per 90 minutes and their xA(expected assists) per 90.

Immediately we see some interesting names in the magical top right quadrant of the scatter graph above. These data searches, even with positional filters added, are open to certain errors and we see one here in the immediate outlier. Jon Thorsteinsson of AGF is included because he has played some minutes in the centre of midfield this season but he is mostly a left-winger and as such his data in this set will be skewed somewhat. There are, however, still some interesting names that we can pick out.

The Brazilian midfielder is capable of playing as either a ’10’ or as an ‘8’ and his time in Denmark has added tactical acumen to his skill set. So far this season Evander is averaging 3.32 passes into the penalty area per 90 with an xA of 0.24 per 90.

Writing recruitment pieces can be an experience. With this piece, it was all but written when news broke that Sampdoria had agreed to a deal to sign Damsgaard with the young Danish midfielder staying in Denmark for the rest of this season. When smart teams are also identifying the players that you do though it is always a good sign. So far this term Damsgaard is averaging 3.99 passes to the penalty area per 90 and he has an xA of 0.17 per 90.

Currently playing for Hacken in the Swedish top-flight Irandust plays primarily as a ’10’. His creative output at the time of writing stands out with 3.72 passes to the penalty area per 90 minutes and an xA of 0.19 per 90. 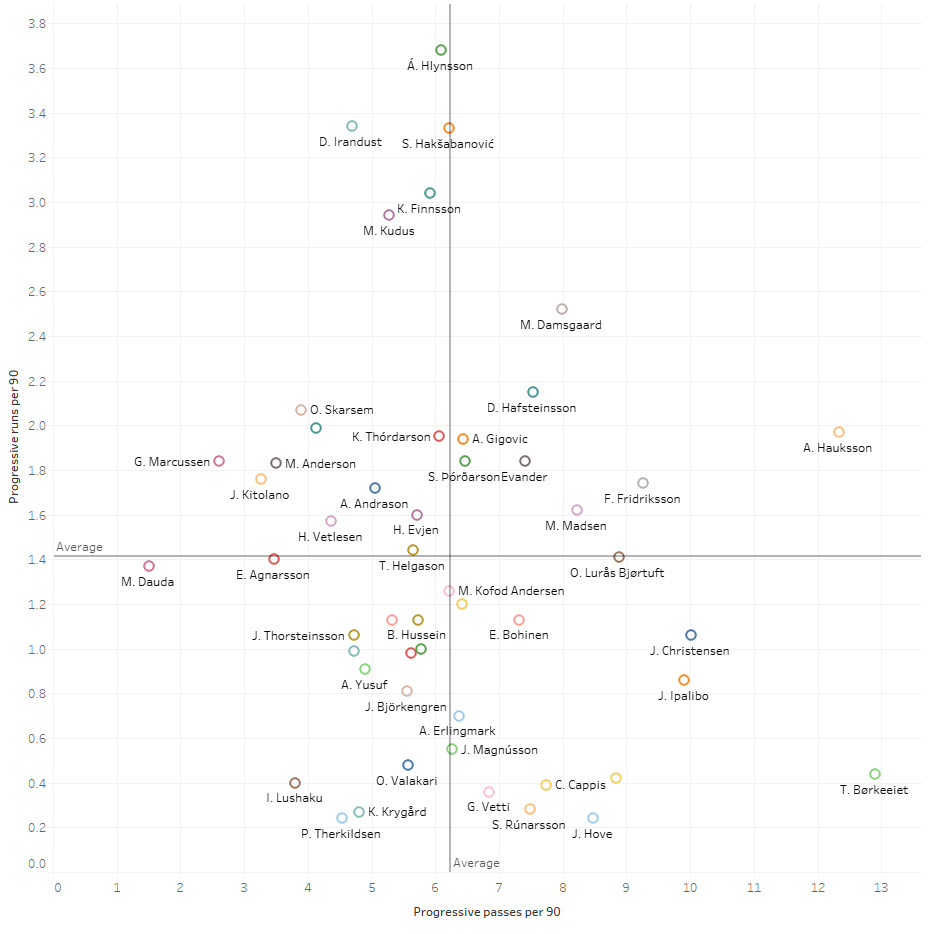 The first thing to note is that Irandust, Evander and Damsgaard all feature in this chart as well. An interesting sign for all three players. We are comparing the player’s progressive runs per 90 with their progressive passes per 90 in this chart. Obviously these are two specific metrics that do not necessarily go together. This is, however, a quick and effective way of identifying which players spike in each metric.

The 19-year-old spikes in terms of his progressive runs and of all of the players in the set he has the most of these with 3.68 progressive runs per 90 minutes along with 6.09 progressive passes. Hlynsson plays predominantly as a ’10’ and likes to pick up the ball centrally before running at the opposition defensive block.

Mohammed Kudus has been attracting a lot of attention so far this season with his powerful performances at the heart of the midfield for Nordsjaelland. He has also recently become a full international for Ghana. Kudus is averaging 2.94 progressive runs per 90 and 5.28 progressive passes per 90. All while playing as an ‘8’.

Alex Hauksson is firmly on the progressive passer side of our data set. Playing as either a ‘6’ or as an ‘8’ in the central areas he displays an interesting range of passing. So far this season he is averaging 12.33 progressive passes per 90 and 1.97 progressive runs per 90.

Ok, there is perhaps something of a pattern appearing here. Nordsjaelland are excellent recruiters and developers of talent but they also appear to favour the same profile if midfielders that we are targetting here. Christensen is averaging 10.01 progressive passes and 1.06 progressive runs per 90. 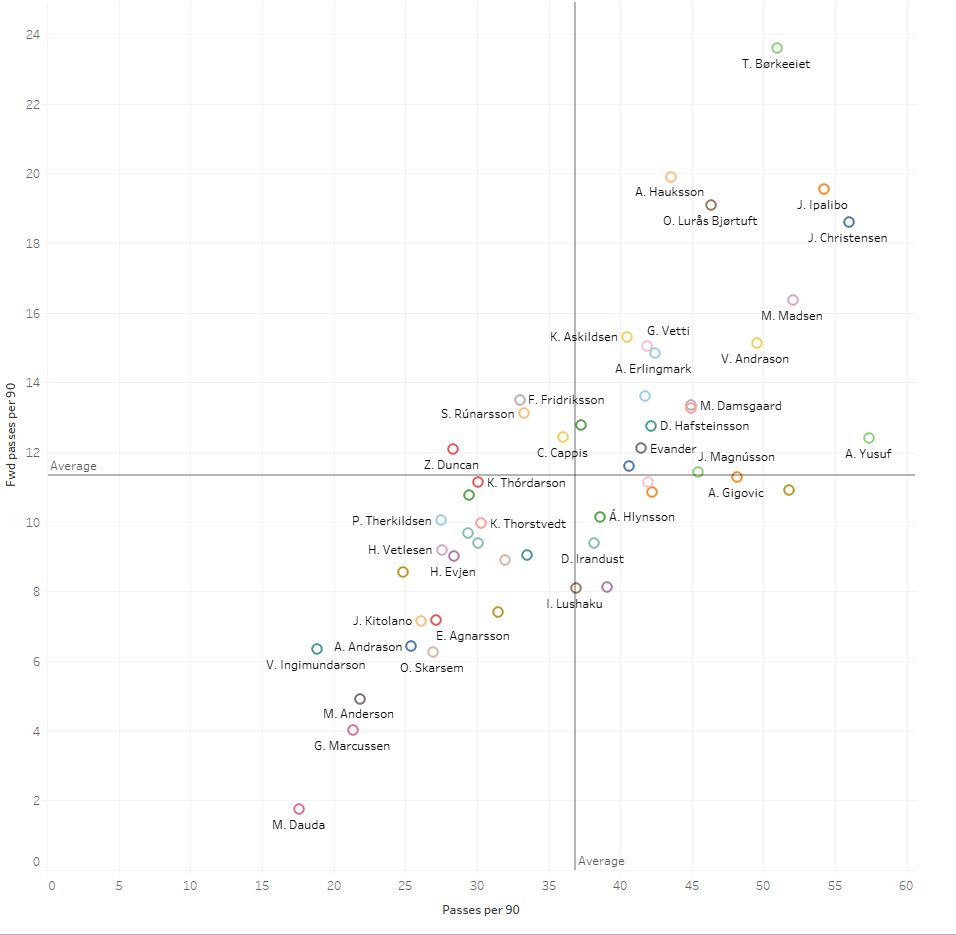 The final of the profiles that we are checking for is the passer. Ideally, we are looking for a player who averages a high volume of passes per 90 minutes but who is also capable of playing the ball forward and not just recycling the ball endlessly backwards or sideways. The metric used here then is simple forward passes per 90 and passes per 90.

The player that stands out for me when applying these metrics is Alhassan Yusuf. The young Nigerian midfielder has impressed as either a ‘6’ or an an ‘8’ and his ability to control the game for Gothenborg has impressed. He is averaging 57.36 passes per 90 minutes and 12.4 forward passes per 90.

The 21-year-old midfielder Jack Ipalibo plays as either a ‘6’ or as an ‘8’ and he is the key midfield player for his side. His ability to control the match centrally from deep areas has been impressing this season. So far this term he has 54.20 passes per 90 with 19.54 forward passes.

So, there we have a brief look at the first set of players who show up well in or data set. The next step would be to add them to a shortlist and then to have them checked on video before the final list is checked live. Data provides a snapshot that can allow us to build initial lists that can then provide options going forward.

The next step will be to choose at least two of these players to build initial reports on from video analysis. Look out for these on the site in the coming days. 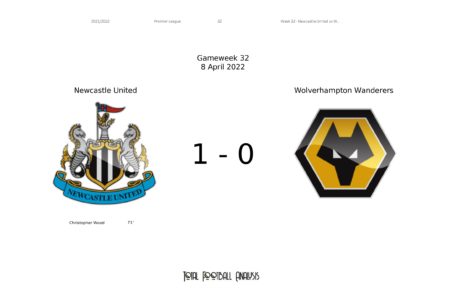 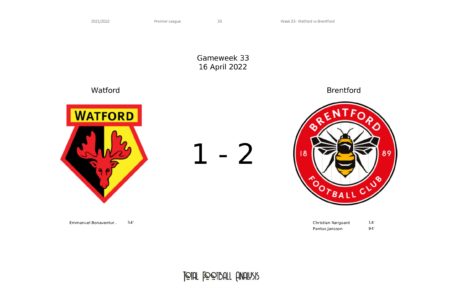 Saturday lunchtime saw Watford vs Brentford in the Premier League. We’ve broken down all the key stats for you to digest […]