Last week I posted an article to the site looking at using data to identify a new central defender for Arsenal. You can find the piece in question here but after comparing different data sets I ended up with a shortlist of two central defenders that I would be targetting if I was a part of the recruitment department at Arsenal. Data is an essential tool for any smart football club whether assessing and benchmarking their own performance or identifying potential targets, as we have done here, but it is not enough on its own to drive recruitment. There remains an important role within a recruitment department for a scout to watch a player play, whether live or via a video platform, with a view to adding context to the data.

This is the purpose of this follow-up article of the tactical analysis/data analysis, and the last which will be posted later in the week. We will use video to flesh out the picture that we have of Adam Webster of Brighton and Hove Albion before giving a recommendation at the end of the report.

When writing a scout report on a player there tend to be four sections that I would consider. These are tactical, physical, technical and mental. For the purposes of a written report on a website, I will leave out mental. This would include speaking to people who know or who have worked with the player and checking for primary sources that may lead to potential red flags about their character. Instead, we will concentrate on the tactical, physical and technical sections in order to build on what we already know about Adam Webster.

First, though, let’s remind ourselves of the metrics that made Webster stand out from the rest.

The metrics that stood out from a tactical perspective were fairly self-evident from the bar chart above. Webster scores highly in his success rate in defensive duels, aerial duels and passes played into the final third. He also plays a reasonable amount of progressive passes that allow his side to progress the ball and play in areas that are more dangerous to the opposition. How though does this analysis apply to the way that Arsenal plays under Mikel Arteta and how is this important?

First of all, we have to understand What Arteta wants from a defender in his system. The only thing that we know for certain from a tactical perspective is that Arteta wants his central defenders to hold the ball longer in the possession phase before looking to play forward into more attacking teammates. This is a simple concept designed to pull the opposition towards the ball before releasing the ball behind them. The further out that Arsenal can tempt the opposition to move the better as it creates space in the opposition defensive structure that can be exposed.

We already know that Webster can play these passes, 9.45 progressive passes per 90 minutes show us this but he is also comfortable when moving forward with the ball at his feet. What he needs to improve on is his understanding of when to engage and try to beat an opponent and when to release the ball to have the maximum impact.

Webster is predominantly right-footed and would be most comfortable playing on the right side of either a central defensive partnership in a back four or a back three. This provides an element of tactical flexibility that would be attractive to Arteta and his coaching team.

So far under Arteta, we have not seen Arsenal adopt a high line. Instead, the central defenders in the Spaniards preferred 4-2-3-1 have sat relatively deep in the attacking phase. This positioning allows for the ball to be recycled back to the central defenders to allow for the angle of attack to be switched when needed. Looking ahead I believe that this will change once Arteta has had more time to work with his defensive unit to fully implement his ideas and tactical concepts. It has been noted that since taking charge at Arsenal we have seen a definite shift in their attacking model to incorporate a number of short passes as the ball progresses up the field. This allows for safe possession but is also a defensive construct that allows for counter-pressing should the opposition win the ball back. I believe that the aim is to have the central defenders defend from the half-way line when Arsenal are in possession of the ball and no deeper. This will ensure that the entire team is capable of playing as a single unit.

This is also, however, not the way that Brighton tend to play under Graham Potter and they tend to prefer a more passive defensive block that is at most medium and rarely, if ever, high. It is at this point that we start to project in terms of Webster and his suitability to the role required by Arteta and Arsenal. This is also the point that differentiates a good scout from a bad scout as the temptation is to build the player up in order to make yourself look better. It is always important to be objective though and in order to provide even more context, I would then link the tactical to the physical and then the technical parts of the report.

The physical section of a report is the one that gives the most variances. I have seen reports that simply list a player’s size and approximate weight before offering another, better-known player who has a similar frame as context. While this information is important it is also important to link all aspects of a report.

So, let’s get the profile, or at least part of it, out of the way. Webster is listed as 6ft2 and has a slender build. His height is evenly distributed and his long legs allow him to cover ground quickly, even against quick forwards and are useful when he dribbles to allow him to manipulate the ball past opponents.

This ability to cover ground quickly is key if Webster was to play in a system with a high line. A common failing for central defenders in this regard is to be uncomfortable and incapable of defending when isolated in wide areas against forwards that are quick.

We see an example of this above with Webster playing for Brighton against Crystal Palace. Palace are transitioning into the attacking phase and a direct pass is played behind the defensive line and into the wide position. With the right-back in an advanced area, we see that Webster has to recover ground and prevent the forward player from collecting the ball and driving at goal. With his long stride, he is able to keep pace with the Palace forward and more importantly he is able to stay on his feet and win the defensive duel when they both arrive at the ball.

Playing as a defender, of course, is not simply a case of defending in transition and we have already seen above that Webster is strong when entering defensive duels. This is the case whether in space or as part of a larger defensive block where Webster understands how to maintain his position and defend his zone to prevent the opposition from breaking through. 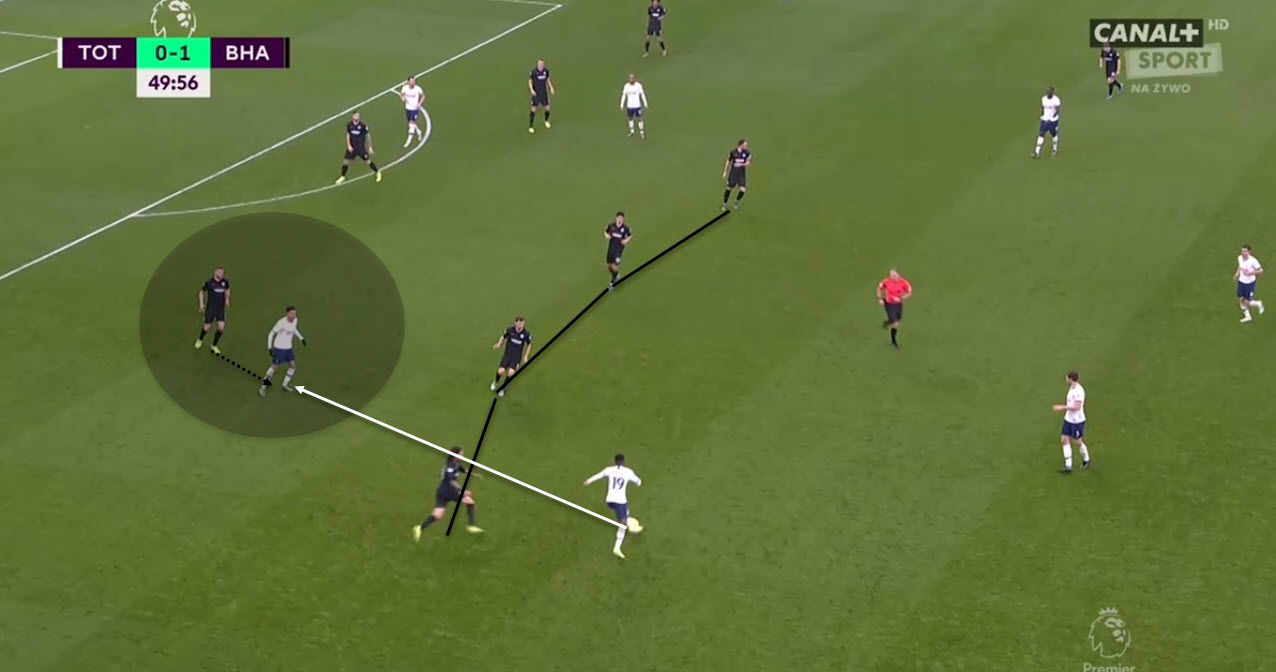 Here we see Webster defending in the match against Spurs and despite the active midfield line ahead of him, the opposition are capable of playing through into his zone. Now, isolated as part of the defensive block against an opponent facing his own goal, there can be no mistakes for Webster. If he engages and gets his timing wrong then he will be turned and the opposition player will have a clear run to the penalty area. If he holds back then the opposition will have space and time to combine from an advanced platform and he could become isolated and overloaded. Webster engages and using his speed and the length of his legs he is able to win the defensive duel and regain possession of the ball before the opposition striker is able to turn and threaten his goal.

From a tactical and physical perspective then I am satisfied that Webster fits the profile that Arsenal are looking for in their new central defender. Now we have to consider the technical perspective.

When assessing defenders there are different technical components to take into account. Ranging from ability and capacity to engage and win the ball, on the ground and in the air, to more attacking qualities when in possession of the ball. Given the importance of the latter when assessing central defenders for Arsenal I will concentrate for the purposes of this article on Webster’s technical qualities in possession of the ball. We have already discussed above that Arteta wants players who are willing to hold the ball and move forward in possession to force the opponent’s to press and engage the ball. 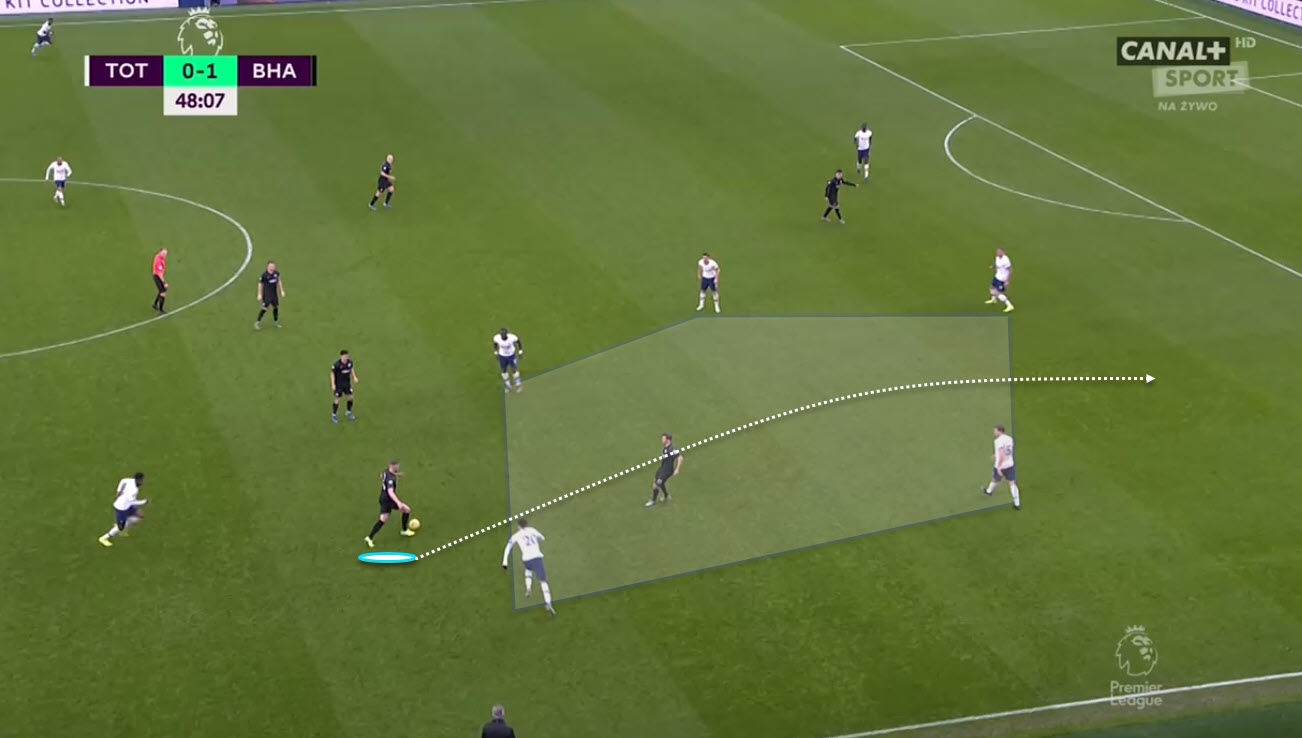 Webster is a confident runner with the ball, at times to a fault, and will be willing to take the responsibility to progress the attack by forcing the opposition to engage the ball. We see an example of this above as he drives forward well into the Spurs half. He carries the ball beyond the defensive line of the opposition and ends up at the corner of the penalty area. It is, of course, important that Webster learns when to release the pass and does not take himself this far out of position on a regular basis. 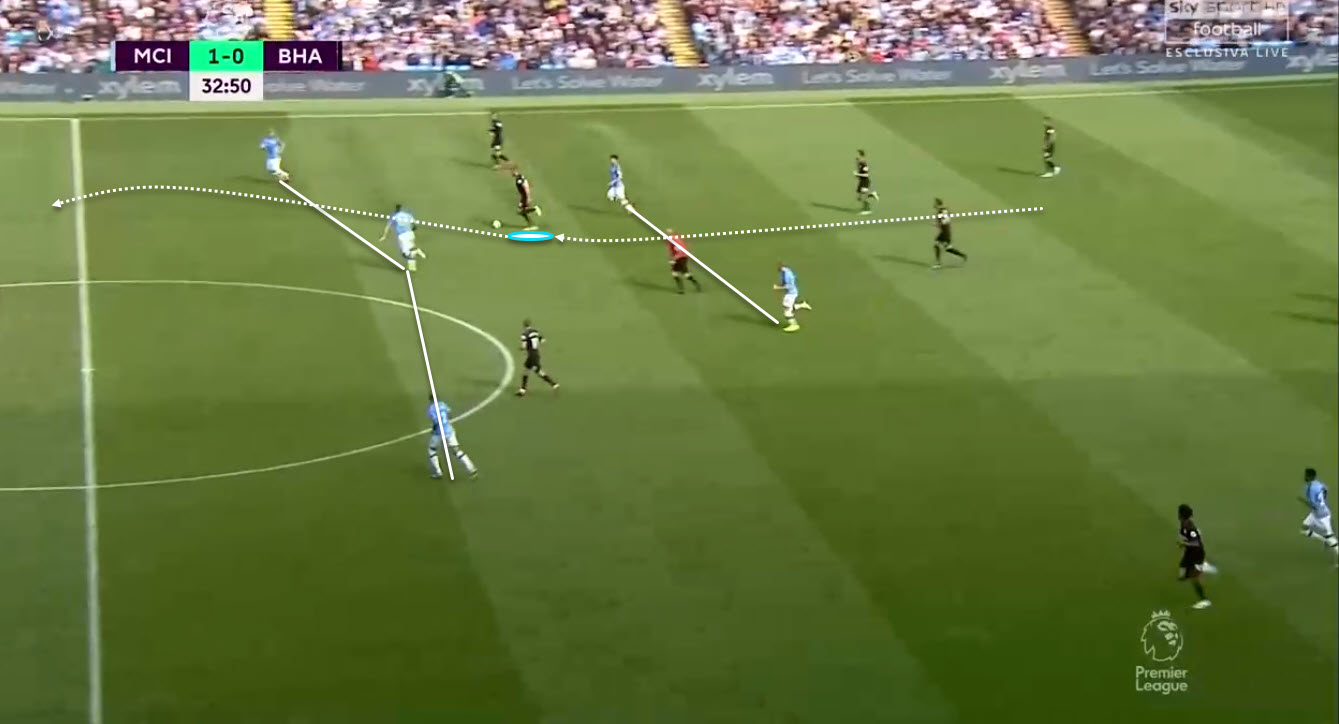 This time the example is taken from the match against Manchester City when Webster takes it upon himself to drive the ball forward into the opposition half. In doing so he breaks two lines of the City defensive block in transition and finds himself in the opposition half with space.

Of course, dribbling forward is only one component of what Arteta wants in possession and out central defender also has to be capable of passing the ball forwards and breaking the lines of the opposition in that way.

This time we see Webster in possession and under pressure from the Aston Villa forward players. Webster is calm in these areas and is not easily intimidated by pressing opponents. In this example, he drives a pass beyond two lines of the opposition defensive block and finds a teammate who is moving back to collect possession between the lines of the Villa block. 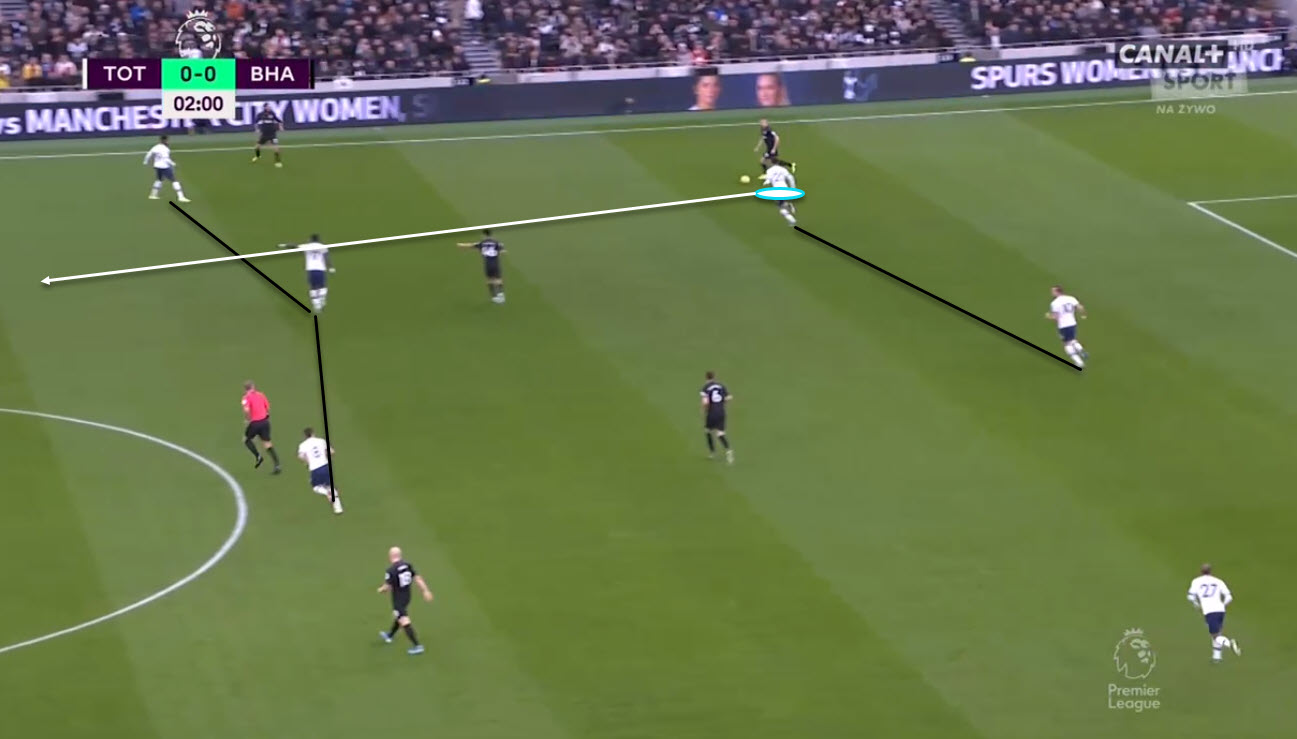 Here we see Webster in possession of the ball against Spurs and he is tight to the right touchline. Once again he is coming under pressure and there are no easy passing options open due to the positioning of the Spurs midfield line. Instead, Webster is brave enough to play the pass through two lines of the opposition and once again this allows a teammate to come back to collect possession in an area that means he can turn and move forward with the ball.

Given the data fit and the fact that Webster projects to be a fit for the position and the role that Arsenal are looking to recruit for I would likely recommend as part of the Arsenal recruitment team that we continue to monitor the player, with a view to getting other scouts within the organisation to report on him as well, for the rest of the season. I would then recommend that we make enquiries into his availability in the summer transfer window.