This is the third instalment of a mini-series I have had running for the last week. The purpose of this series is to identify a new central defender for Arsenal. In order to achieve this, the method has been relatively simple. I used data in the first instance to identify a small shortlist of players who fit what Arsenal are looking for in the position under Mikel Arteta. I then took the shortlist and examined more of the data around those players performances over the course of this season. This resulted in two players being identified as potential targets, Adam Webster of Brighton and Ben White who is on loan at Leeds from Brighton.

The next step was to provide more context to this recommendation with a scouting report on each player that provides examples of why these players fit what Arteta will be looking for from his central defenders. The report on Adam Webster has already been posted but we have to now provide a report and tactical analysis on Ben White as well.

Firstly we should remind ourselves of what made White stand out from our initial data search.

The stand out metric for White so far this season is his ability to win defensive duels. 9.02 defensive duels per 90 with a success rate of 74.05% tells a story in itself. The 22-year-old central defender is extremely adept at positioning himself and engaging in duels when isolated against an attacking player. He possesses the tactical and positional awareness to ensure that he is in the right place and the technical qualities to ensure that he wins the majority of his duels. The important thing, however, is that we are able to take this data and apply it to the style of play that we expect from Arsenal under Arteta.

The first thing that we have to acknowledge when discussing Ben White is the fact that he is currently playing and learning under the Argentinean coach Marcelo Bielsa. There is a clear link in playing style and methodology between Bielsa and the Manchester City coach Pep Guardiola. Before joining Arsenal, Arteta was an assistant at City under Guardiola and it is likely that Arteta will use similar tactics at Arsenal to those used by Guardiola at City. White, therefore, already has a grounding in these concepts.

We are aware that Arteta has instructed his current central defenders to hold possession of the ball and not release it forward too early. This is a simple instruction that is designed to encourage opposition players to engage and press the ball. This then, in turn, creates space behind them that can be exploited by the central defender playing a progressive pass through the thirds. Given that White currently plays in a very possession orientated system he is already comfortable with this expectation.

White will often play, in the attacking phase, isolated on the half-way line where he is expected to be able to receive and recycle the ball when needed. He is also expected to be able to defend in space if the opposition wins the ball and look to play either down the wide channel or over the top of the defensive line. My suspicion is that this is the kind of position that we are going to see the central defenders for Arsenal occupy going forwards as Arteta gets more time on the training pitch with his defensive unit.

White is already comfortable in a high block with an aggressive pressing style and would fit well into the type of side that this Arsenal team are likely to evolve into.

In terms of physical profile, White is not as imposing a figure as Adam Webster. He stands at just over 6ft tall and has a relatively slight frame. His stride is not as large as Webster’s but he still has the pace over short distances to deal with the threat of most forward players. He also isn’t particularly tall from a central defender and this could go some way to explaining why his aerial duels are not a particular strength.

What Ben White does have, however, is the timing and strength to challenge and win defensive duels against attacking players. With the nature of the Leeds system, there are times in which the central defenders are isolated in space with attacking players able to run at them with space and time. White is perfect for his system given his ability to position himself and read the intentions of the striker but he also has the physical strength to be able to win these duels.

We see an example of this above as the opposition are attacking in a quick transition. White is the player who is isolated as the last defender with two attacking players running towards him. One player makes a run to his blind side while the ball carrier looks to attack past him and into the penalty area. White reads the movement of the ball carrier and stands his ground. As he engages he wins the duel and calmly starts the attacking move for his side.

As well as being strong when isolated as above White is also good in duels when pulled into wide areas. He uses his strength and his intelligence to prevent opposition players from being able to turn easily towards goal. 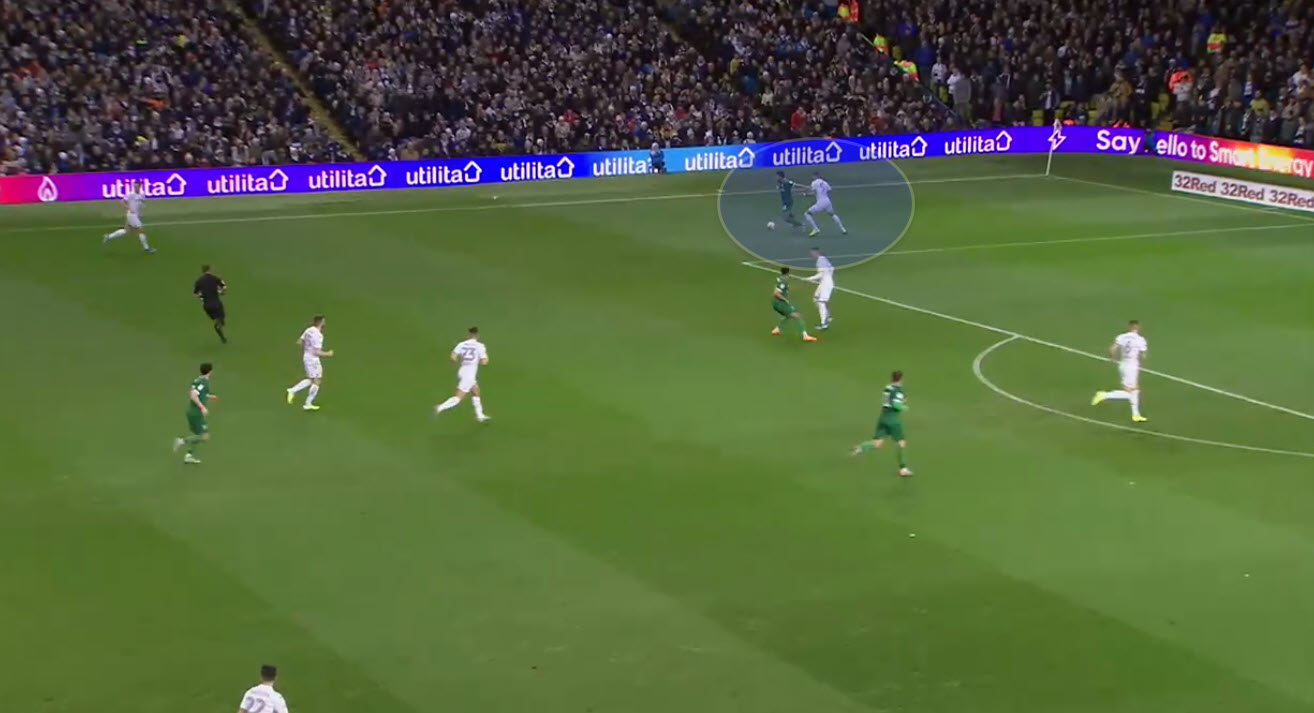 In the above example, we see White isolated against the attacker in the wide area. The position of the other attackers means that there is no help immediately available in terms of cover and so White has to work to prevent the forward from turning and moving in towards goal. He does so comfortably and when the attacker looks to combine with a full-back making a forward run, White is in position to win the duel and start the attack for his team.

From a tactical and a physical perspective then we can be satisfied that White fits what Arsenal are looking for. We also have to consider the technical profile though.

While we have seen that White possesses a positional understanding and strong technique in the tackle, we also have to examine his ability in possession of the ball. Especially given the fact that Mikel Arteta is likely to heavily favour a possession-based style of play. We have already discussed above that Arteta wants his central defenders to hold the ball and move forward in possession in order to pull the opposition press towards them. 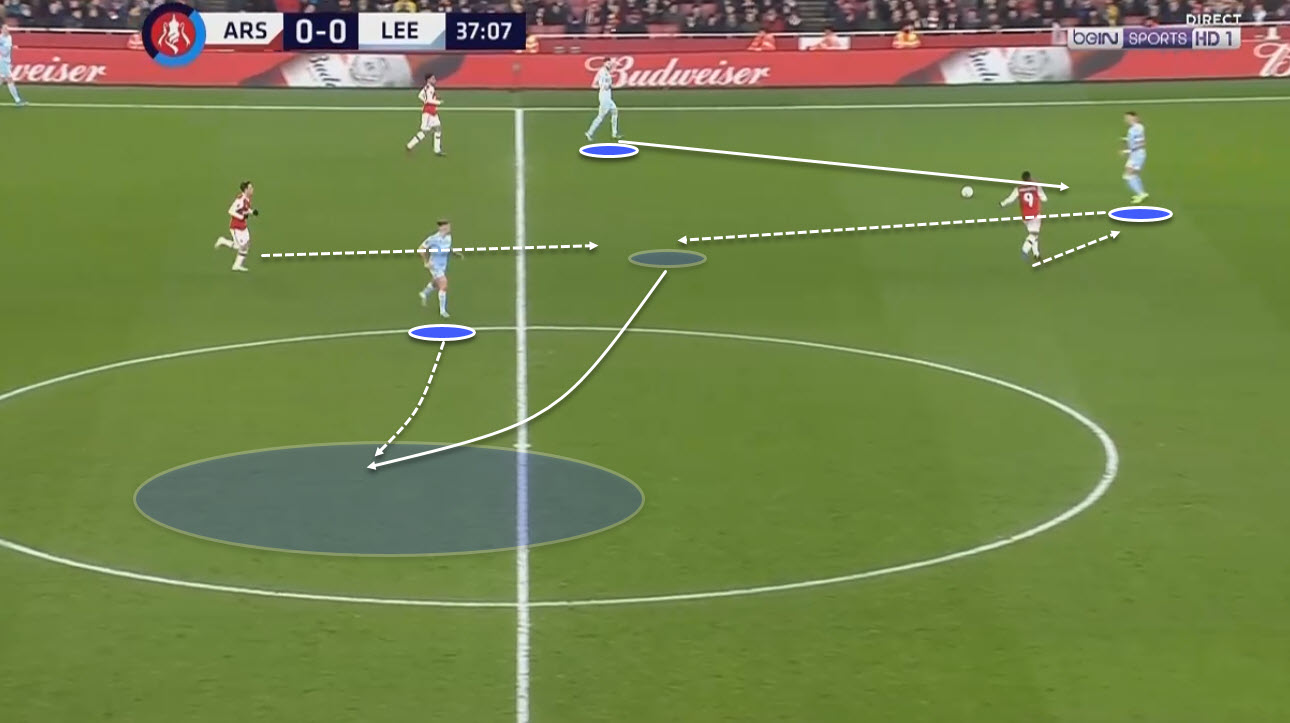 We see White doing just that here, ironically in a match against Arsenal from earlier this season. As the ball is played back into him we see Lacazette look to press the ball for Arsenal. White calmly moves past him and steps forward towards the halfway line. This movement, in turn, forces another Arsenal player to move out to press the ball and the space is then open for Kalvin Phillips to move into the centre. As the midfielder presses the ball, White is able to easily play the pass to Phillips and Leeds progress the ball forward with time and space. 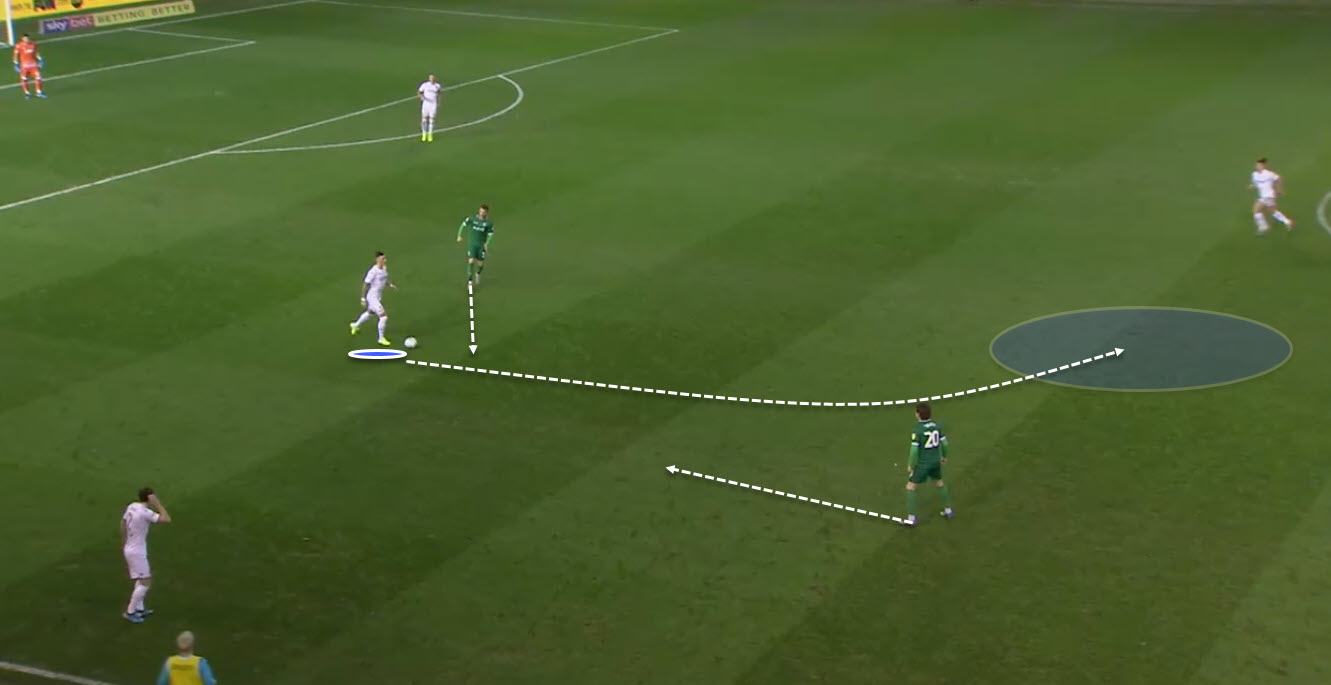 We see another example of his ability on the ball above. As White receives the ball he initially fakes to play back to the other central defender. This triggers the press from the most advanced opposition player who moves to engage from behind the ball. As White steps forward, another opposition player moves to press but White simply moves past him as well and steps forward into space as he advances into the midfield area.

As well as being a competent dribbler of the ball, White is also a strong passer with the range to play vertically or access all areas of the field through diagonal passes. 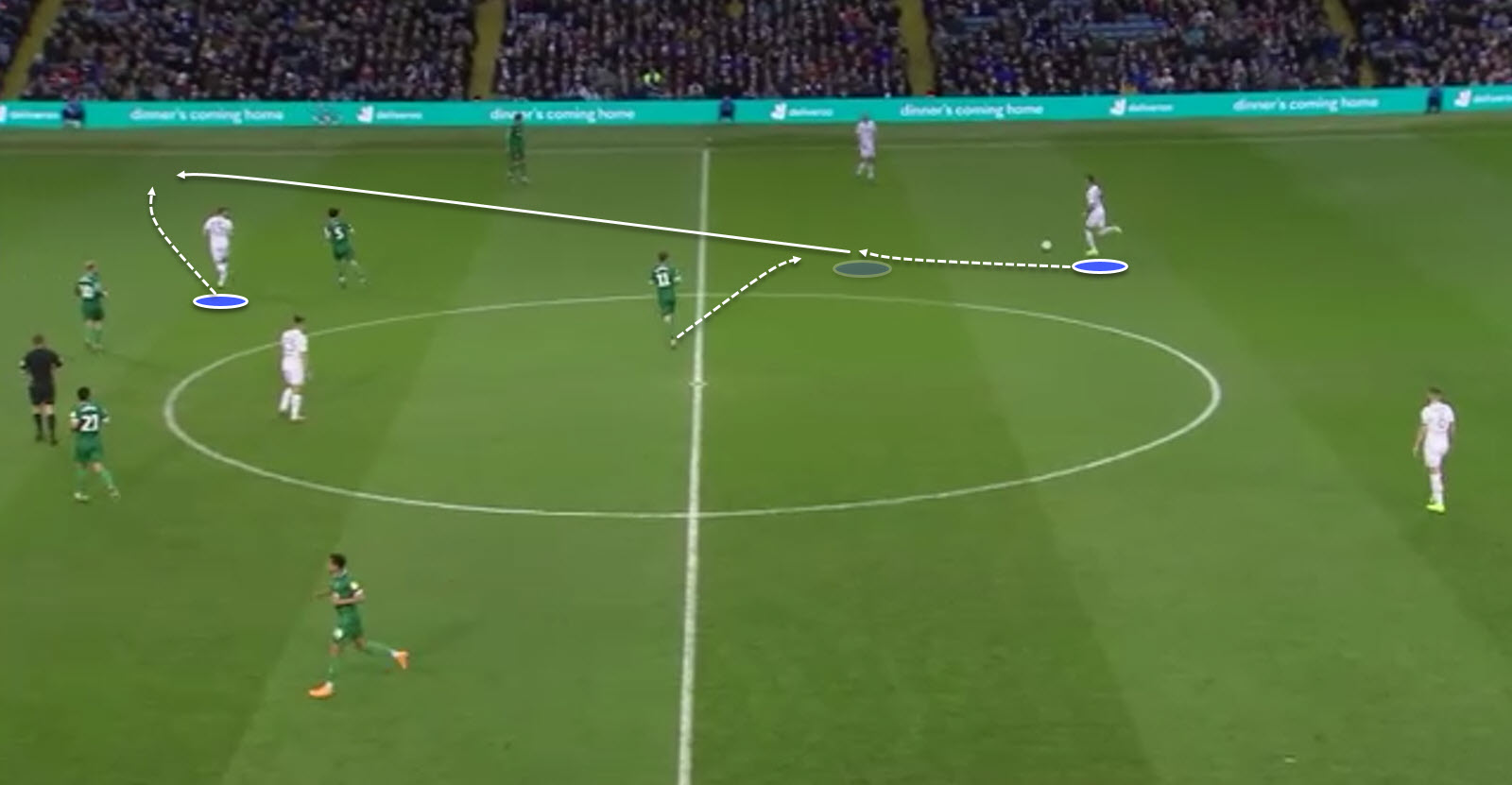 Here we see both facets of White’s game. First, he moves forward in possession to trigger the opponent to press and then as the advanced player makes an intelligent move into space, he plays the vertical pass that releases his teammate into a dangerous position. White is intelligent enough to know when to hold onto the ball and when to release it to a teammate who is in a better position higher up the field. 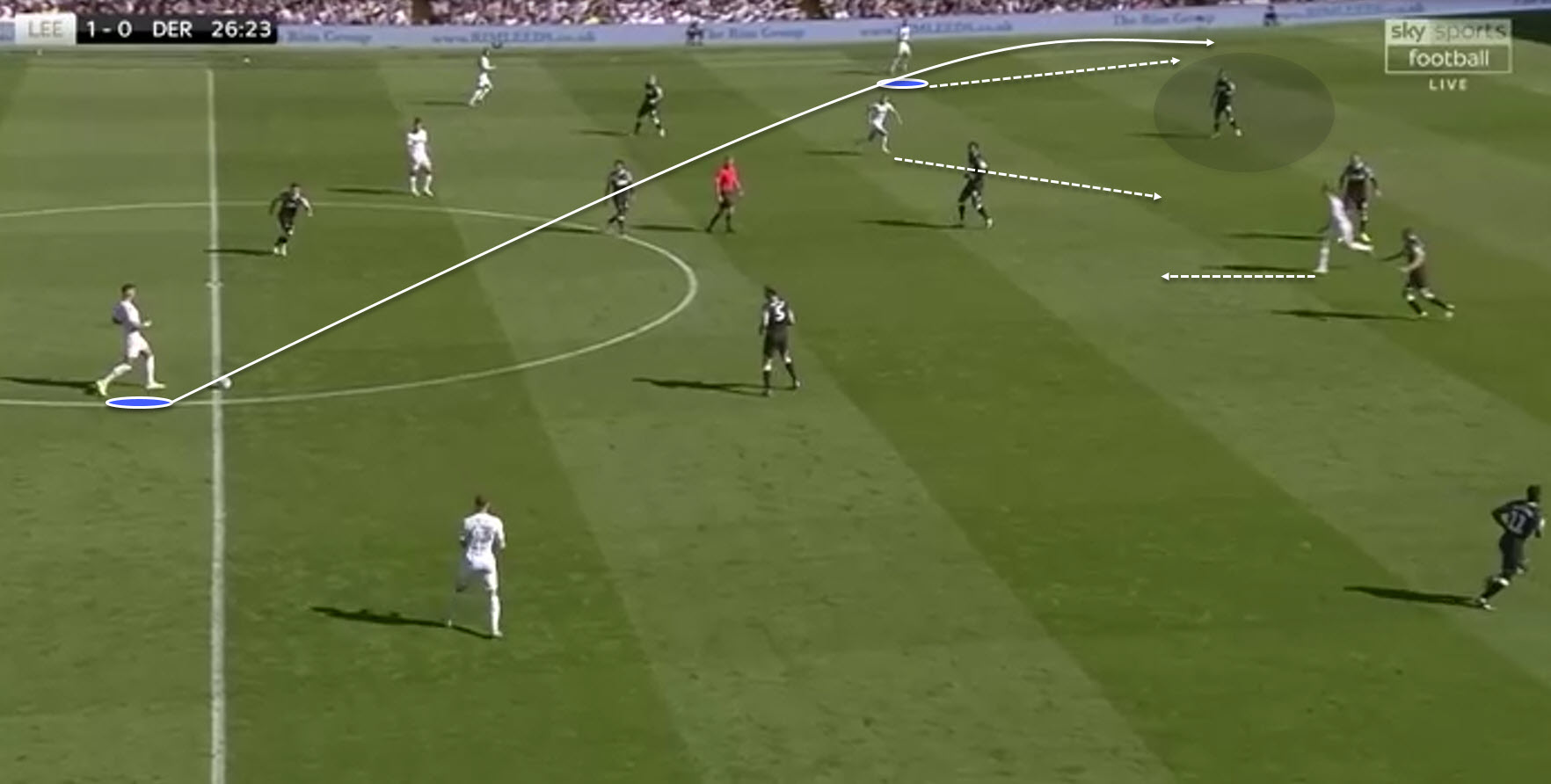 This time we see White with more time and space on the ball as the opposition are not pressing yet. There is a simple rotation ahead of the ball with the forward dropping deep and the wide player moving inside. This freezes the opposition full-back, who is highlighted, and White is able to play a diagonal pass that releases the wide Leeds player into space.

If I was part of the Arsenal recruitment team, Ben White would be my first choice to shore up the centre of the defence. He is homegrown and at 22, he has years of development left until he reaches his peak. He already has the skillset to shine in Arteta’s system and he shows signs of being highly coachable, as this tactical analysis has shown. Price may be a sticking point as Brighton are likely to be fully aware of what they have but a high fee would be worth it for the years of output that you are going to get from the young defender. Sign him now.