While Clermont Foot turned a lot of heads last season in Ligue 1, with a spirited campaign that saw them avoid relegation in their first season back in the top-flight it, it would still be fair to say that they were not the season’s biggest surprise as RC Lens impressed on their way to a seventh-place finish.

Lens have long been recognised as having one of the most passionate sets of fans in French football but simply assuming that they rode a wave of fervent support to a strong league finish would be to do them a disservice. Lens have a reputation as a very good developer of talent. They have a strong and fruitful academy system but alongside that, they have also recruited and strengthened their squad intelligently to supplement that.

We have seen that already this season following the sale of the 22-year-old midfielder Cheick Doucoure to Crystal Palace for a fee reported to be in the region of £20.34M as the club have reinvested intelligently. The signings of the young Belgian forward Lois Openda for £8M from Club Brugge and the 22-year-old Ghanaian midfielder Salis Abdul Samed for £4.5M from Clermont Foot have brought a sense of quality and urgency to the club.

Going into the match last weekend away to Monaco, we have seen Lens start relatively well with an opening day win at home to Brest and then a 0-0 draw at home to Ajaccio. With that said, however, not many people would have seen this result coming as Lens comfortably outclassed a youthful and expensively assembled Monaco side to win the match 4-1.

We will look closely at the way that Lens have been constructed with an emphasis on the way that they progress the ball and play in to dangerous areas and the way that they manage to control the game in central areas. These were the key tactical factors that saw Lens comfortably outclass the more favoured opposition in this match.

This tactical analysis piece will be an analysis of the tactics used by both sides, focusing particularly on how Lens trounced Philippe Clement’s men at the weekend. 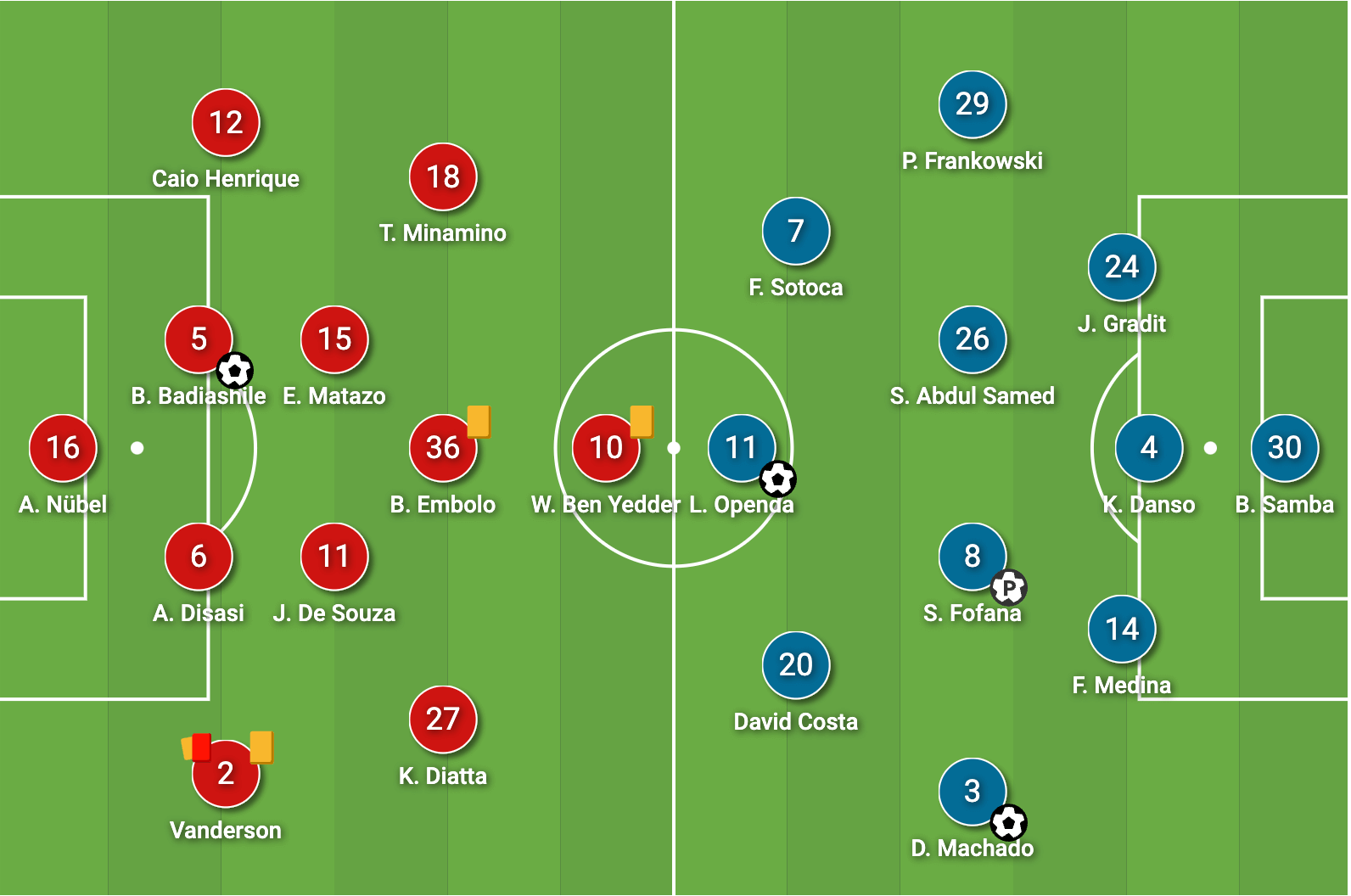 In this match we saw Lens line up as expected in a 3-4-3 system although the two players who were nominally playing as wide forwards, David Costa and Florian Sotoca, very much positioned themselves centrally in order to support Openda and find spaces around the double pivot at the base of the Monaco midfield. We saw Abdul Samed taking the place that was vacated by the sale of Doucoure as the Ghanaian midfielder held the centre of the pitch and allowed Seko Fofana to drive forward in possession of the ball.

Make no mistake this was a talented Monaco side with new signings Breel Embolo and Takumi Minamino playing as advanced midfielders behind the prolific and dangerous Wissam Ben Yedder.

Lens progress the ball effectively through their right-side

One of the most impressive aspects of this match from Lens point of view was the way that they were able to progress the ball through the right-hand side of their structure. With their three man defensive line, they split wide in the possession phase and ensured that the opposition could not effectively press the ball and prevent the ball from coming out. It was in the midfield line, however, that we saw the most effective ball progression with Przemysław Frankowski, the 27-year-old Polish international, being particularly impressive in possession. It is actually interesting to note at this point though exactly where the two sides attacked throughout this match.

This graphic, which is taken from the Wyscout match report, is interesting in that it shows just how centrally focussed Monaco were in the attacking phase. A staggering 92% of their attacks were concentrated through the central areas of the pitch and although they generated 2.39 xG from these attacks they still made it relatively easy for Lens to defend against them by not playing with any genuine width. Lens, on the other hand, were more balanced with their attacks as 16% went down the left, 37% went down the right and 47% went down the middle.

Their attacks down the right-side for Lens were particularly potent though thanks to the combination of Frankowski and Sotoca down that side. With Sotoca positioning himself more in the half-spaces and not the wide areas, he was able to receive the ball in pockets of space between the Monaco defensive strucutre. While Frankowski was playing as a wingback, he is not a player who will typicaly drive down the outside and, as such, he likes to receive in the wide areas and then find angles to play progressive passes that break the lines. 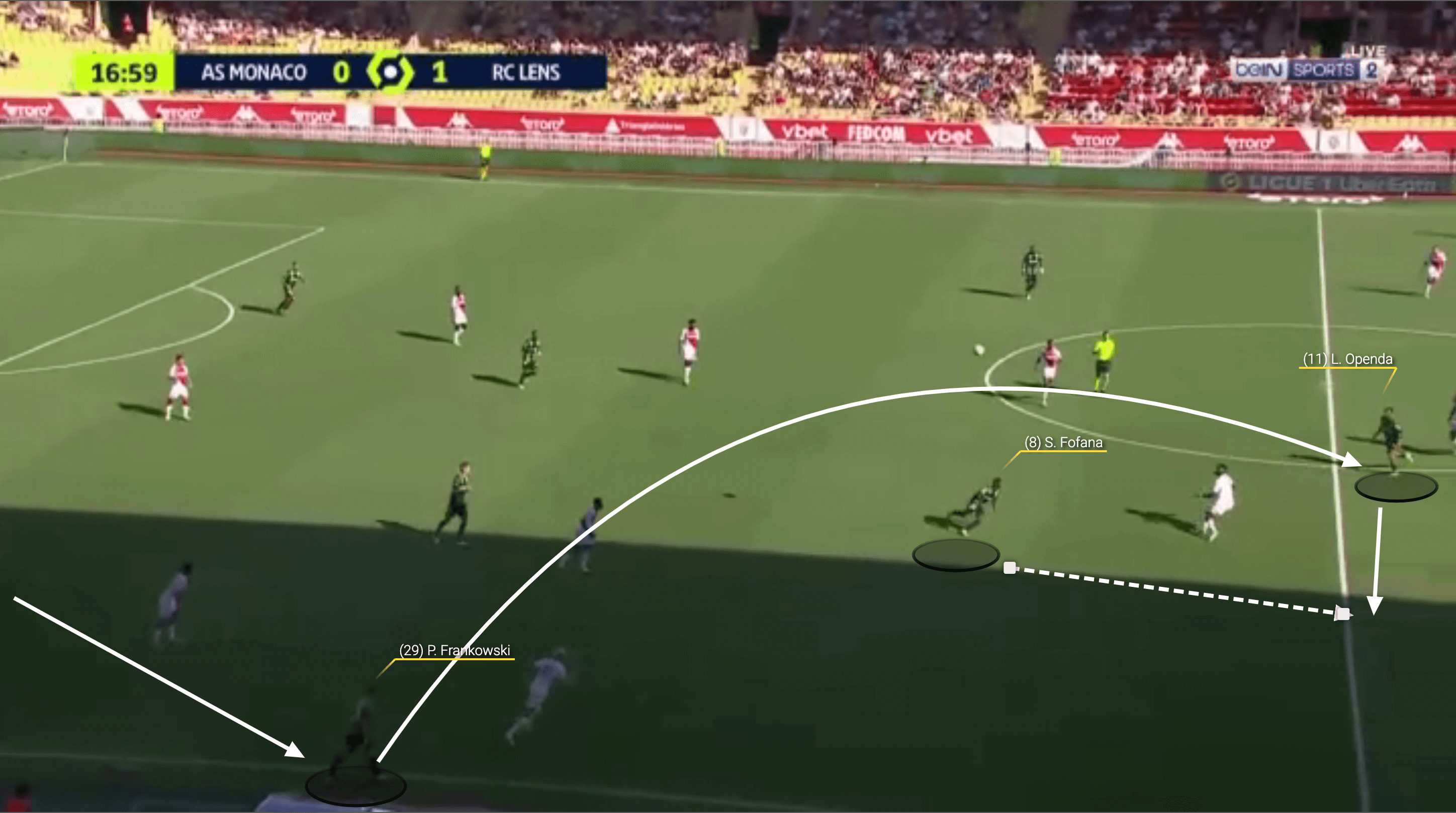 We see in this example a typical example when it comes to the way that Lens progressed the ball down the right-hand side through the positioning and passing of Frankowski. As the ball comes out from the defensive line, the Polish international wingback is positioned tight to the touchline on the near side. He is not a ball carrier and instead looks to quickly hook the ball round to play into the central areas of the pitch. Frankowski knows that he can make this pass because one of the attacking players will be dropping in order to receive the ball and help their team play into the middle third.

In this instance, it is their new Belgian forward Openda who has dropped off and, as he receives the progressive pass from Frankowski, he makes a quick lay-off to access the movement from midfield from Seko Fofana before then spinning and looking to advance aggressively.

Fofana is able to make these forward runs thanks to the positioning of Abdul Samed who holds the centre of the pitch effectively. 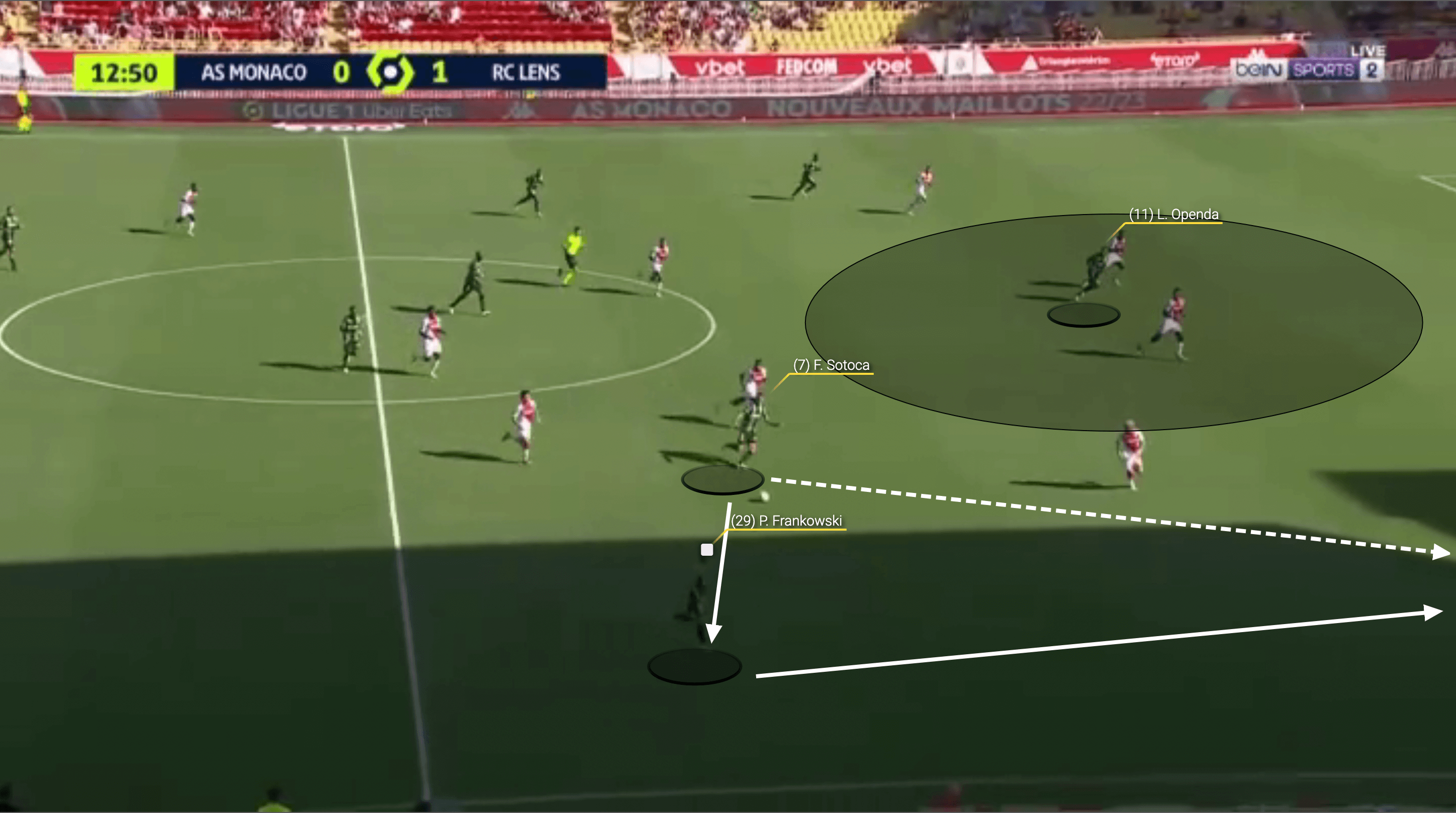 The positioning of Sotoca throughout this game was one of the most underrated aspects of Lens attacking play. His movement and game intelligence meant that he consistently found space in the final third in order to receive the ball and then give options to break a line either through an off the ball run or a pass.

We see an example of this here as Sotoca receives the ball in a pocket of space in the near side half-space. He immediately drops the ball wide to Frankowski and triggers a press out to the ball from the Monaco player. Sotoca, however, then continues to move forward in order to receive the next pass. His aggressive movement in these areas allowed Lens to consistently play the ball into dangerous areas and the Monaco defensive structure consistently failed to adapt and defend against this effectively.

With the addition of Abdul Samed to a midfield that already contained Seko Fofana we have seen Lens build one of the most impressive press-resistant midfields in French football. In this match, it felt as though Lens were overloading the middle of the pitch despite the tactical systems, leading to a 2v2 situation in the centre of the park. Time after time we saw one of the two Lens midfielders in possession centrally, stepping away from challenges before moving the ball intelligently and efficiently away from pressure.

With Lens typically looking to create more overloads in the half-spaces in advanced areas of the pitch it was important that they held the centre of the pitch effectively and Fofana and Abdul Samed regularly won their individual battles in these areas. 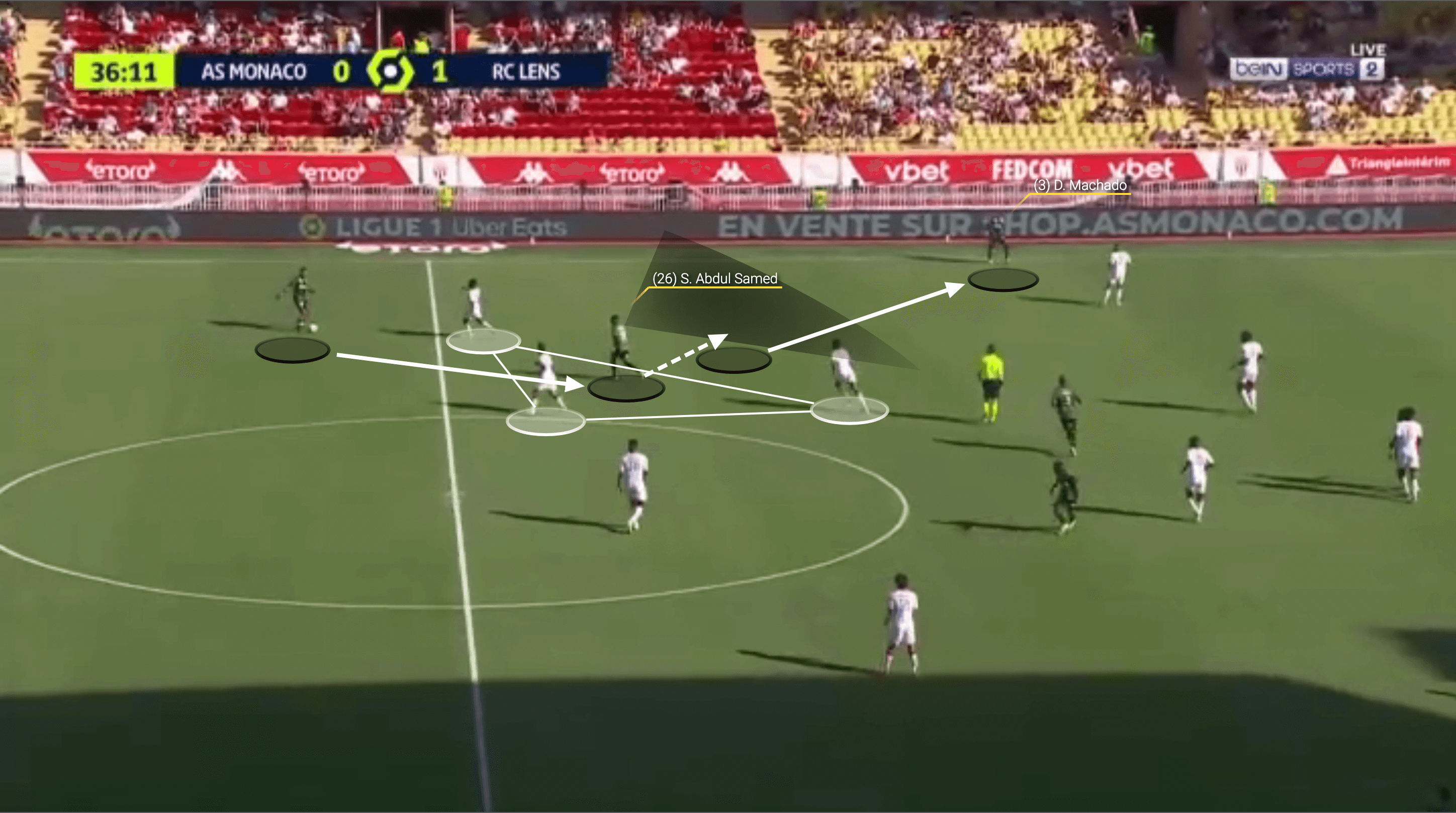 Abdul Samed was more of a physical presence in the deeper areas of the midfield as Fofana pushed into more advanced areas. Whenever Lens were in possession in the defensive line, it was Adbul Samed who would drop off to give an angle to the player in possession of the ball. Monaco struggled to get effective pressure on the ball as their front four, striker and three advanced midfielders were overloaded by the Lens goalkeeper and Abdul Samed dropping in and creating strong overloads in the initial build-up phase of the game.

The Ghanaian midfielder was a constant presence in the central areas. He showed that he is comfortable receiving the ball under pressure and he would outplay his immediate opponent before then making an easy short connection to shift the ball. We see this above as he receives the ball in an area in which he will be put under pressure. He outplays the opposition midfielder with a positive touch into space, that he has already identified, before making a short connection as he passes the ball out to the wide area. 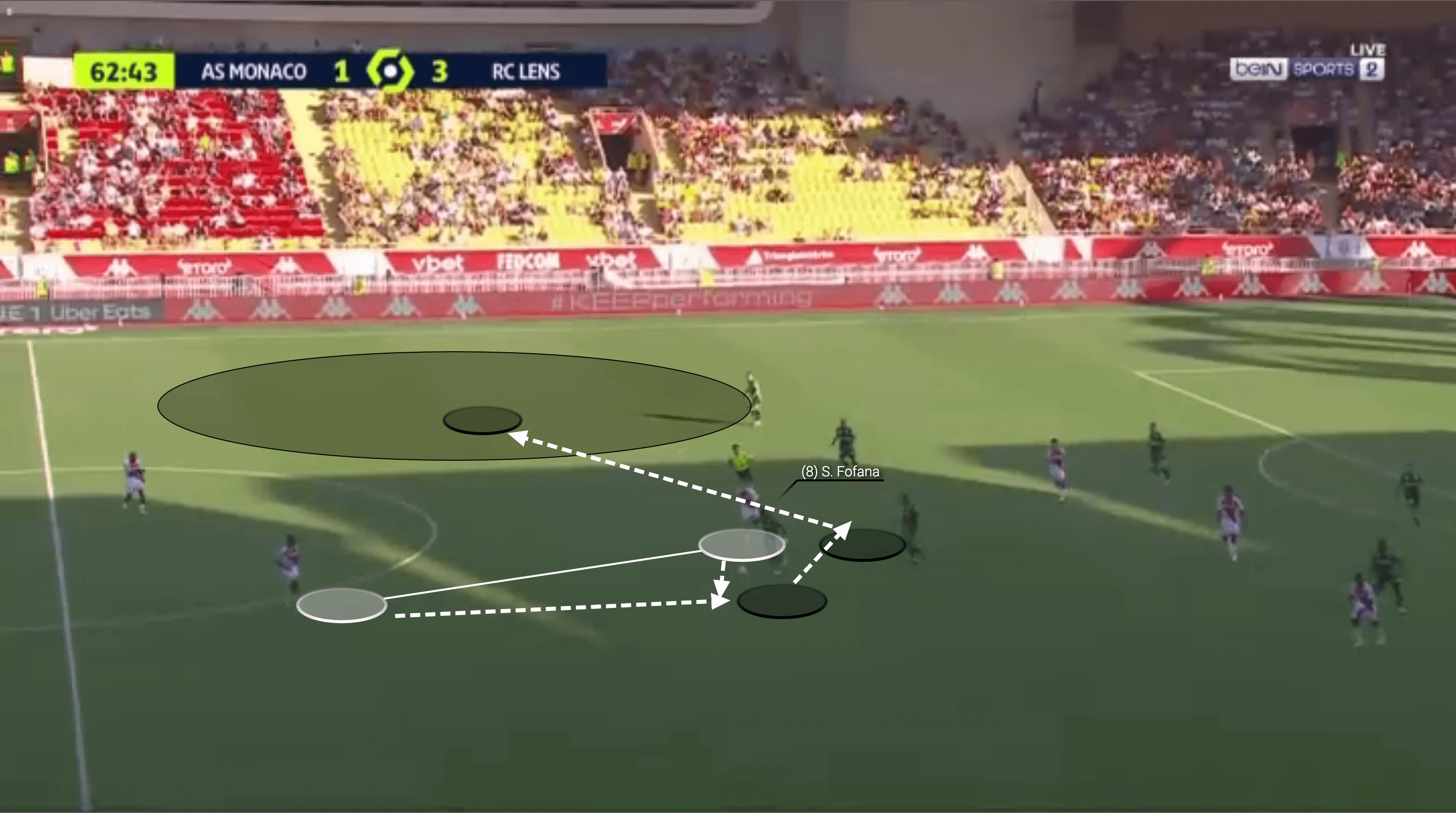 Seko Fofana is also an extremely press resistant presence in the centre of the pitch. He has the ability to receive the ball deep to relieve pressure on the back line before then twisting and driving away and into space.

In this match Fofana was very effective in terms of breaking through Monaco’s pressing and then driving forward into more advanced areas of the midfield. He effectively acted as the more advanced of the two midfielders as he linked the midfield and the attack throughout the game. In this example, we see an example of how press-resistant a midfield player Fofana is. As he received the ball centrally, he was immediately pressed and engaged by two opposition players at different angles. Fofana had the quality to simply spin away from the pressure on his shoulder before then driving forward and into space.

With two midfielders who are press resistant and capable of receiving and then playing in tight areas like this, Lens have effectively developed a squad and a structure that will see them compete even against teams that play a three in the central areas against the two that Lens have in that zone. In this match, when they were effectively matched up 2v2, they comfortably outplayed Monaco in the centre of the pitch.

Seven points from three league matches represents a very strong start to the Ligue 1 season from Lens as they look to replicate their wonderful performances from the 21/22 campaign.

Losing Cheick Doucoure, who was arguably their best and most important player last season, cannot be ignored but Lens have replaced his strengths within the squad effectively through some smart and creative recruitment.