Darwin Nunez: Is he the key player in a tactical evolution at Liverpool? – scout report

22-year-old Darwin Nunez has moved from Benfica to Liverpool and signed a contract until 2028. The Portuguese club had previously announced the Uruguayan’s departure and revealed details about the transfer. Accordingly, the striker has moved for 75 million euros. With bonus payments, the sum could rise up to 100 million euros.

“This is wonderful news, I’m grateful to everyone at the club that this transfer went through,” said Klopp: “Darwin is already a great player – and he still has so much potential to get even better. “

Working with Nunez will be “exciting,” emphasized the 54-year-old coach: “His age, his dedication, his hunger to improve. He believes in our project and our plans as a club.”

In this tactical analysis in form of a scout report, we will take a closer look at Nunez’s playing style, his strengths and weaknesses. Furthermore, this analysis will show how he might become a key player in a tactical revolution at Liverpool.

Unsurprisingly, given his goal return, Nunez likes to be in the opponent’s box: A centre-forward by trade but he’s played on the left-wing and operated as a second striker behind a partner at times. 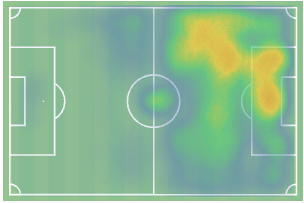 Darwin Nunez is a physical handful standing 187cm. Nunez is also lightning quick and this is his most dangerous attribute. Nunez has reached a top speed of 36.5 kilometres per hour in the Champions League this season. to put that into perspective: Salah hit 33.5 km/h whilst Kyle Walker, Leroy Sane and Kylian Mbappe have all reached 34.9 km/h.

For Benfica, Nunez offered a constant out-ball operating as a pressing forward. His size allows him to be targeted with long balls like a target man and bring teammates into play.

Additionally, his speed and non-stop running mean he can spin in behind and run the channels. This combination is completely natural and with the right coaching, Darwin Nunez could be a complete forward.

Nunez is most effective when he’s played alongside a partner. He’s still a big threat when he’s played as a lone forward but he likes to take up wide starting positions often standing on the blind side of a fullback.

This position offers two big benefits: the first is that it allows Nunez to see the offside line giving him more space to make his curved runs and keeping himself onside before teammates play the pass. 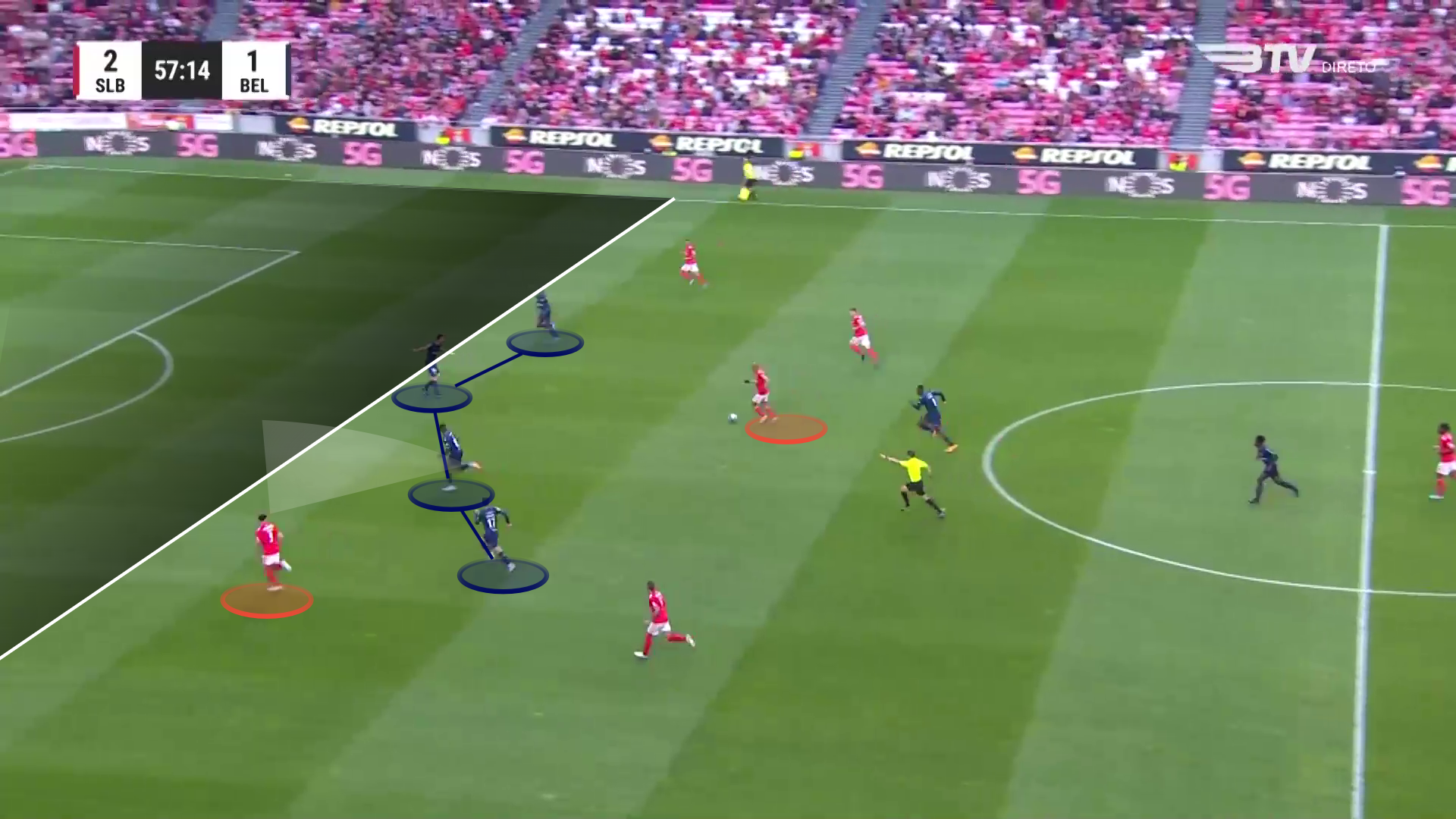 Meanwhile, the second is that it creates a physical mismatch with Nunez up against a fullback who tends to be a smaller defender. This is especially useful in crossing positions as he can dominate them airily and win headers. 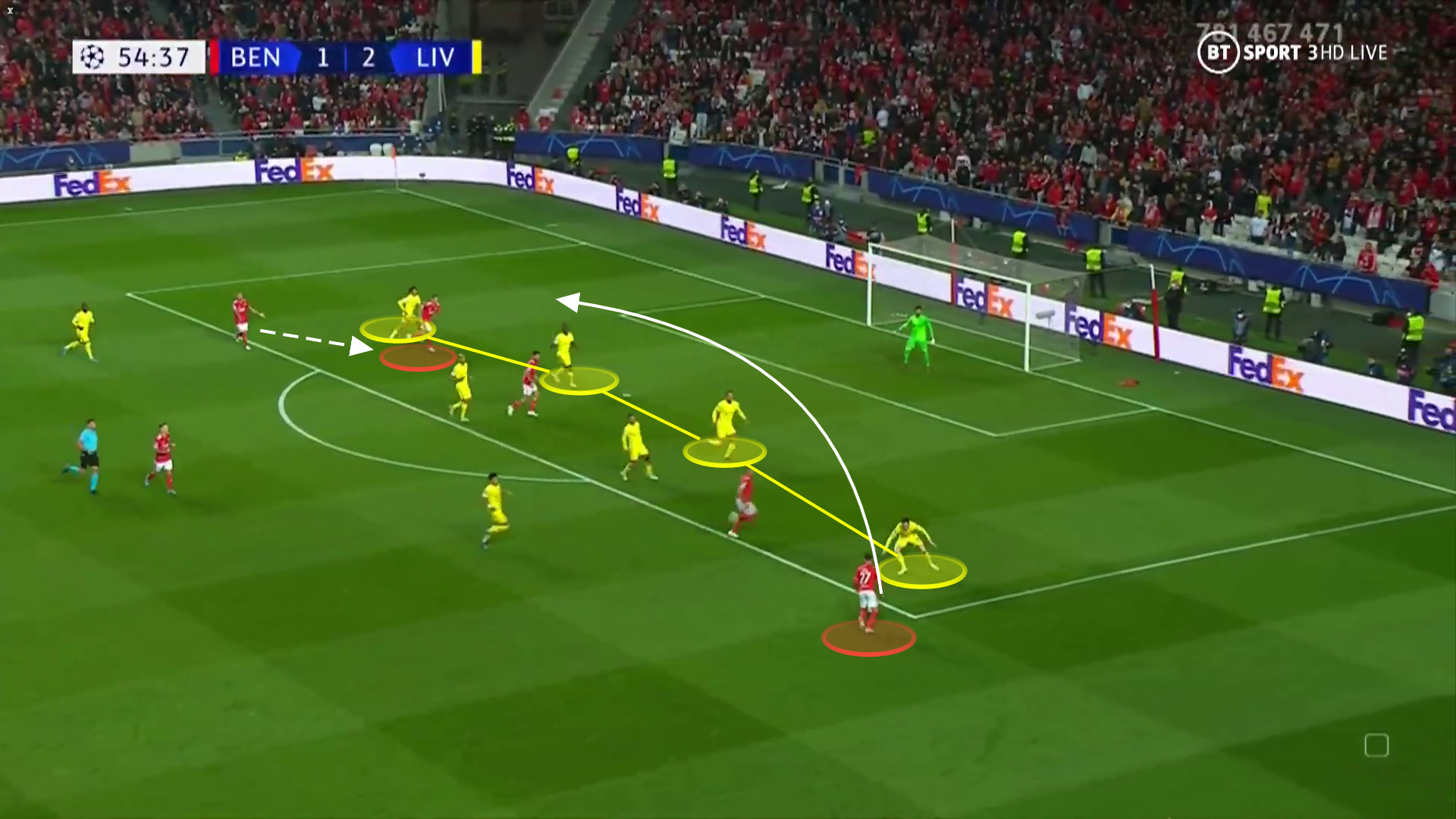 Nunez can still move wide while playing as a lone forward. But, this means that his side plays without a central striker. Meanwhile when he’s played in a front two, when Nunez moves wide it tends to drag a centre-back with him creating more space for his partner.

Darwin Nunez combines his extraordinary physical attributes with great off-the-ball movement. He’s always combining little movements with runs in behind to manipulate the opposition’s defence. His speed means that, if a pass is played and he’s not been tracked, Nunez will have a free run at goal. But, his non-stop movement means that he occupies multiple defenders who try and match his runs which creates space for others.

His goal against Tondela really highlights his excellent skill set. Leading the line on his own he starts in a central position. Then as Benfica begins to counter-attack, he immediately pulls wide attacking the space vacated by Tondela’s right back. Everton plays it wide to Nunez who attracts the centre-half creating a qualitative overload. 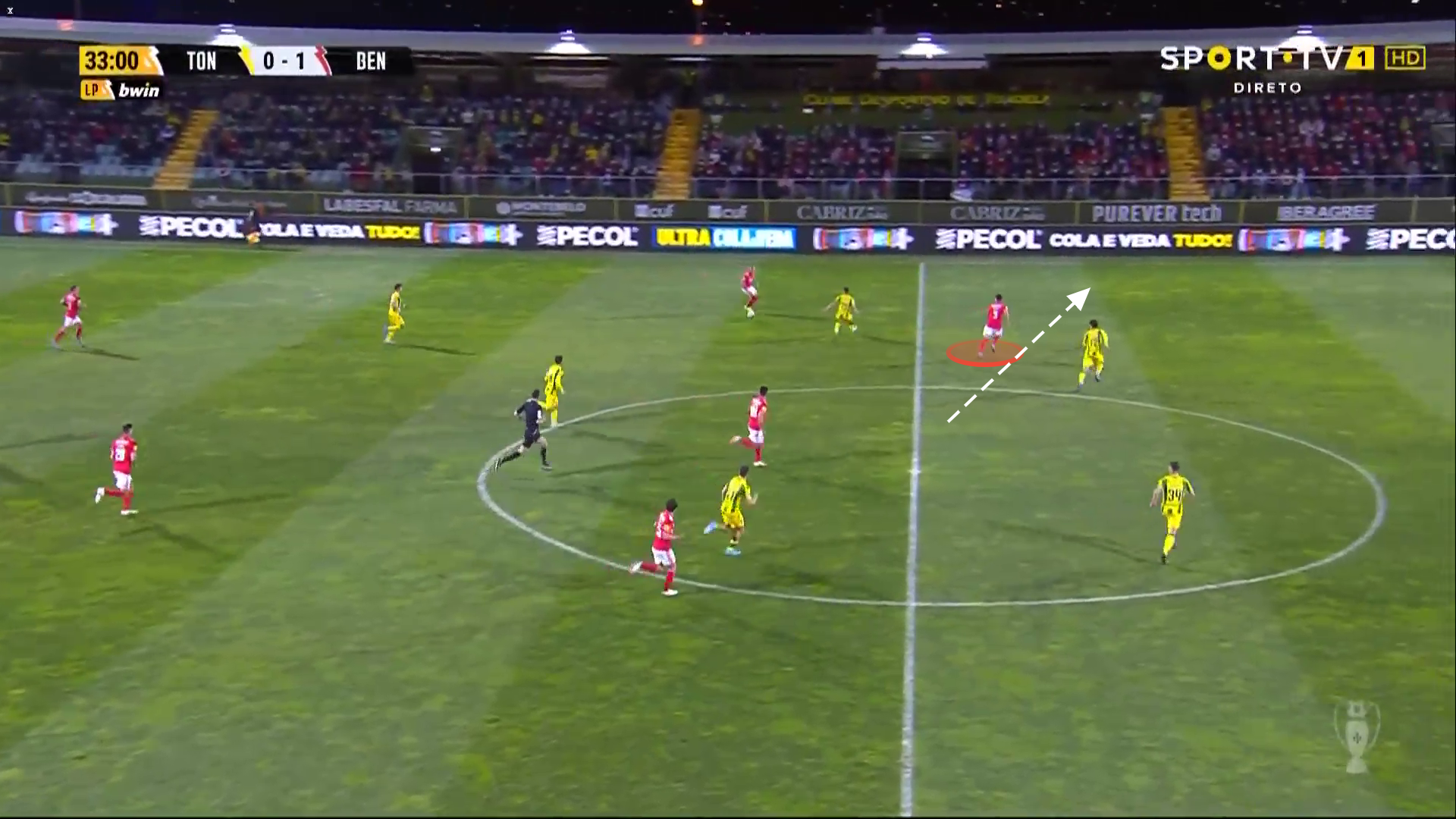 With Nunez’s electric pace up against the less mobile centre-back, the centre-back simply backs off giving Nunez time and space to cut inside and pick out the top corner. 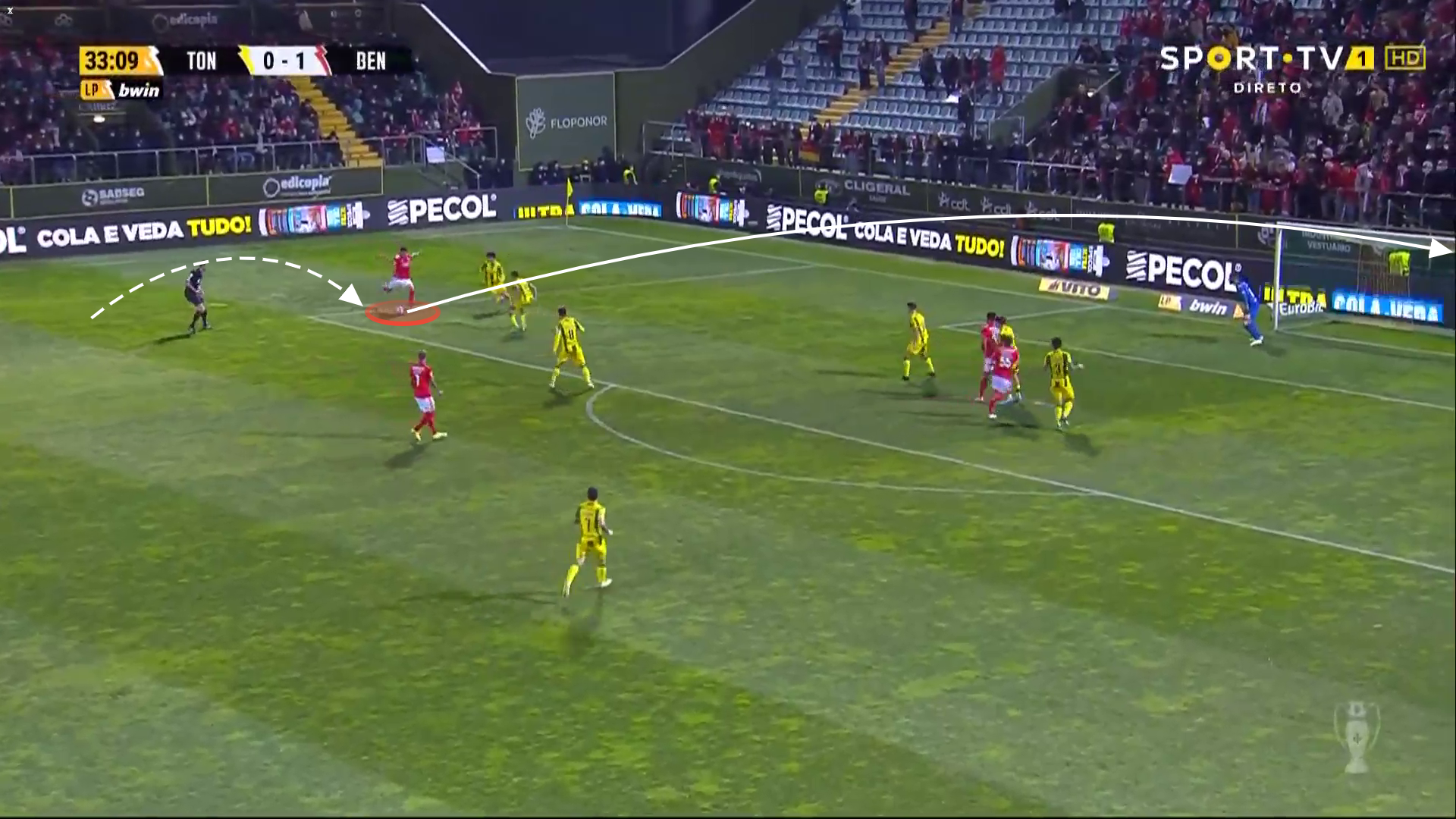 However, the Uruguayan international is not the finished article. He’s still a very raw player that needs to hone his craft if he’s to perform consistently at the top level. His first touch is quite unpredictable. His ability to link the play and his lack of aggression when in possession makes it difficult for him to play with his back to goal.

He also struggles to consistently make the right decisions – be that over-dribbling the ball when an easy pass is on or deciding to shoot from a difficult angle/position when a teammate is in a better position (like in the situation below). 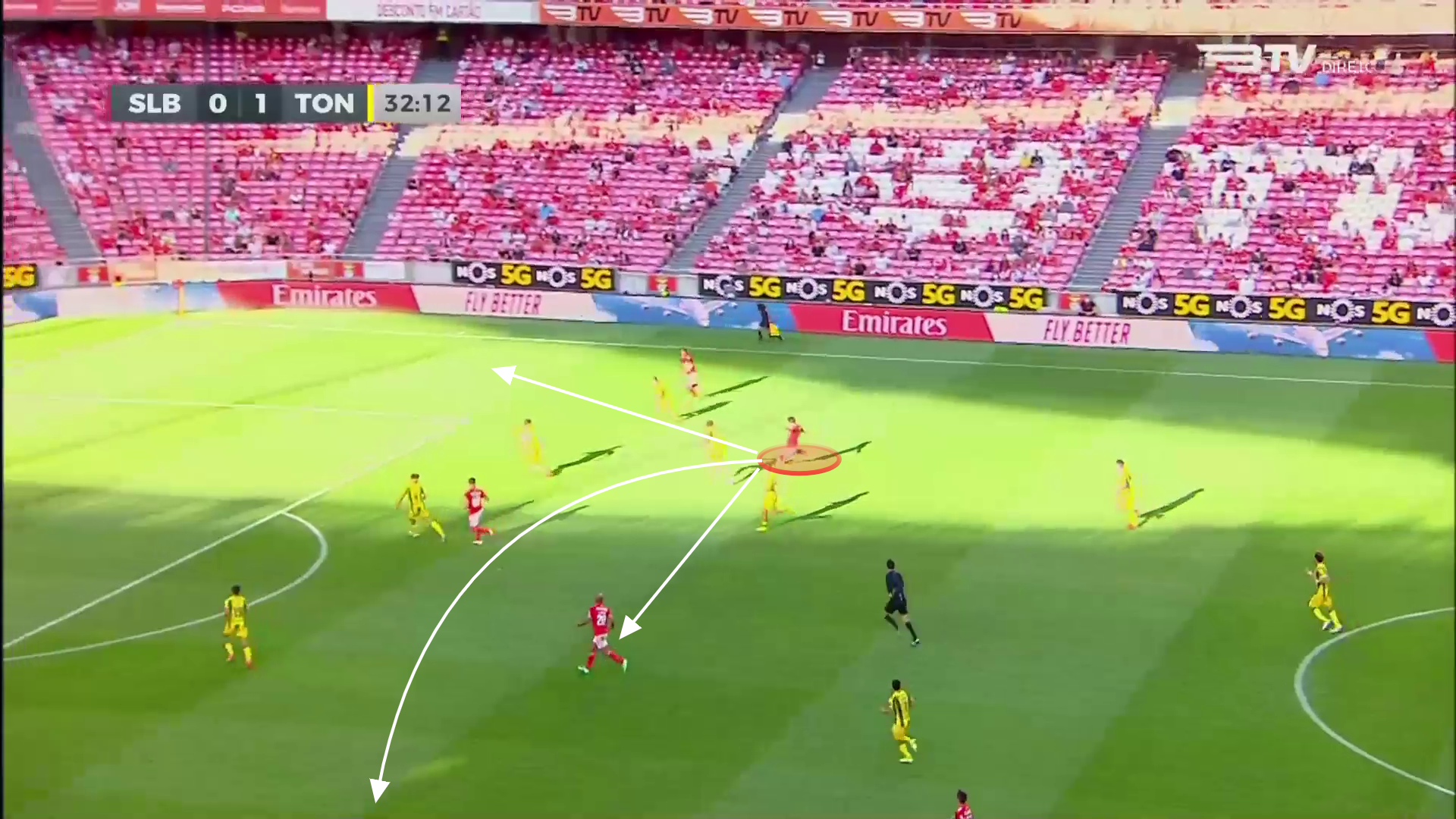 Obviously, as Nunez matures these aspects will improve – especially given his meteoric rise from struggling to start in an Uruguayan first division game to starring in the Champions League just three years later.

On paper, Nunez will play in the middle up front. 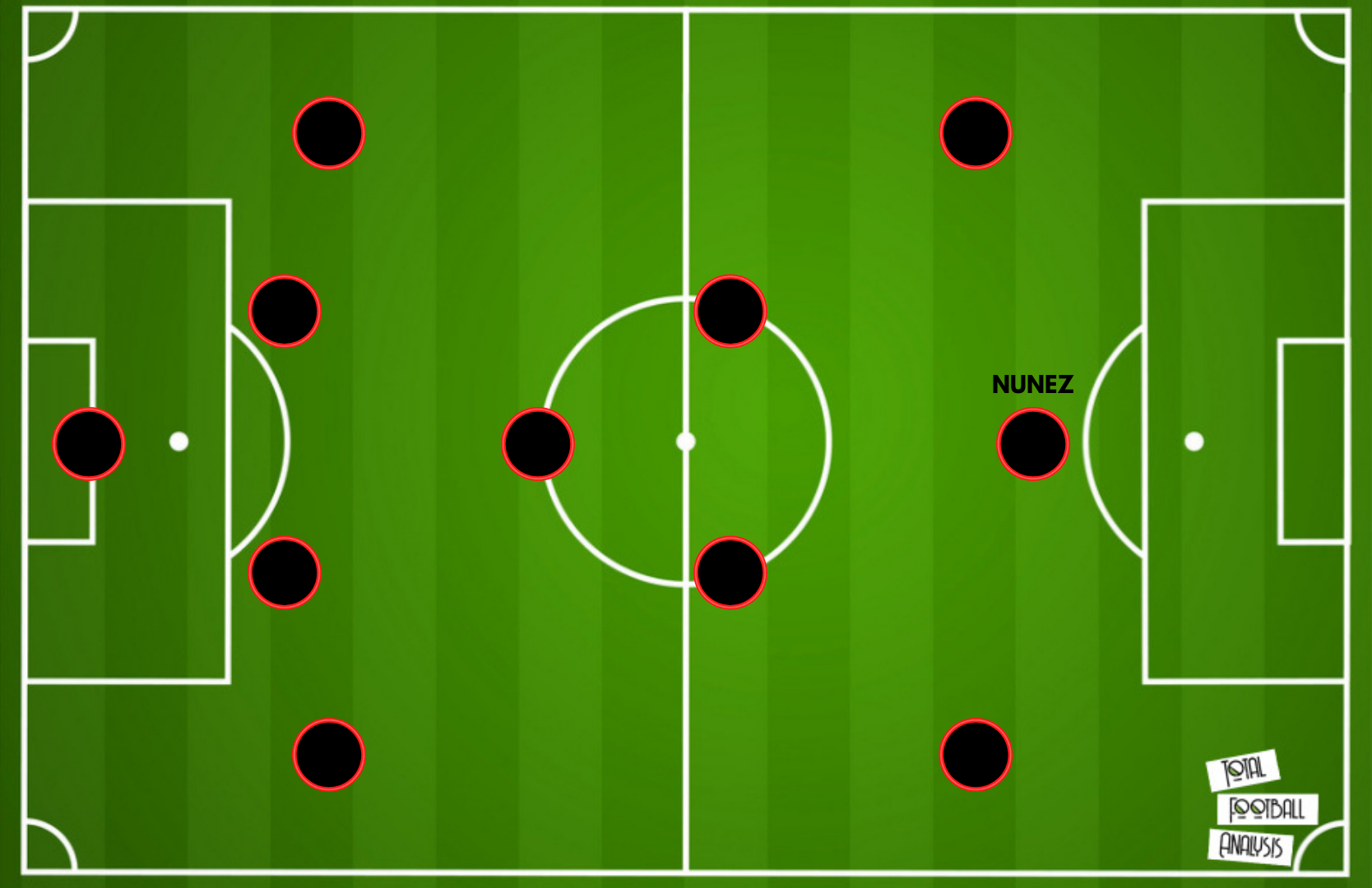 But this makes for an interesting point. As already mentioned, Nunez likes to move out wide onto the left wing. He positions himself between the right fullback and right centre-back regularly. He might struggle to run in behind the defensive line as he did at his former clubs since Liverpool’s opponents are likely to stay rather deep in their own half. We can’t really judge Nunez dribbling in very tight spaces yet since he played in a very counter-attacking Benfica side.

With Nunez likely to drift out to the left-wing, Mohammed Salah might be isolated and lots of space is created in the centre of the pitch. 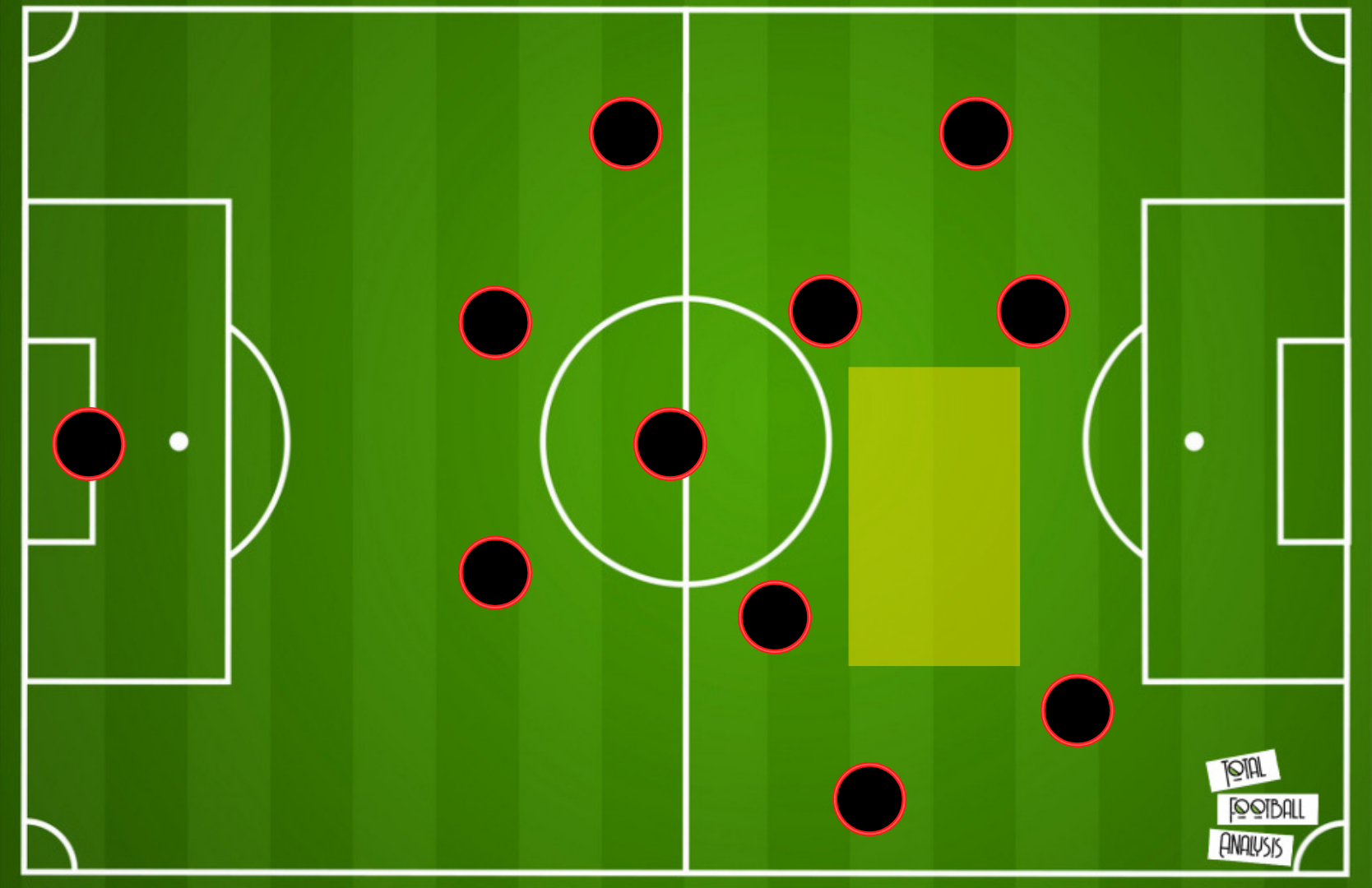 Since Nunez’s hold-up play isn’t the best yet and he rather provides spins in order to get in behind the defensive line, this central area remains free. One option is that Alexander-Arnold will be even more involved in central areas in possession by drifting inside. 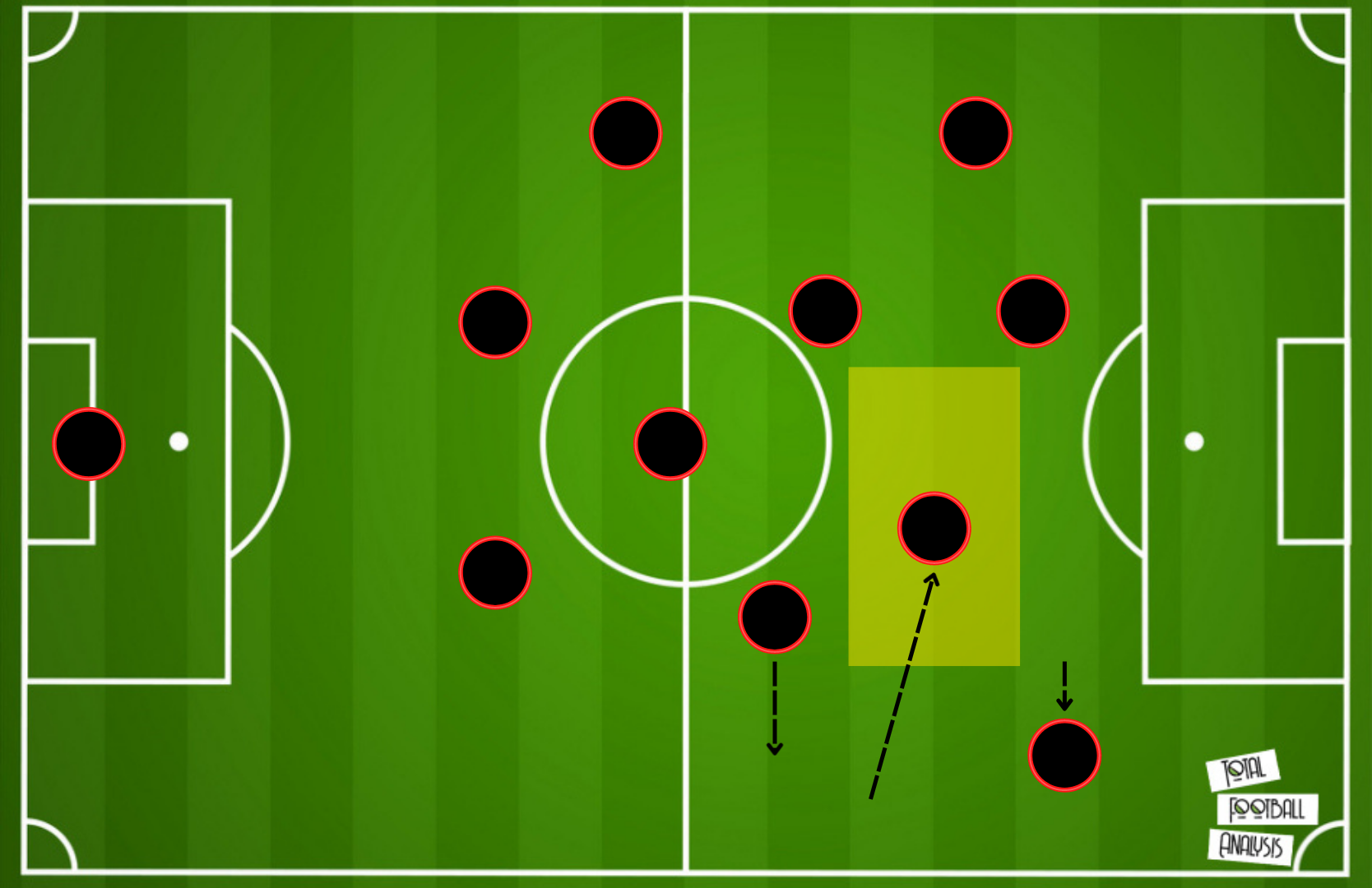 The second option to fill this area is a swap of position with Diaz who likes to cut inside. A third option is that Nunez does not only drift to the left but also pushes the backline even deeper and provides a lay-off option for Salah. Salah loves to cut inside, get a lay-off and shoot with his strong left foot. 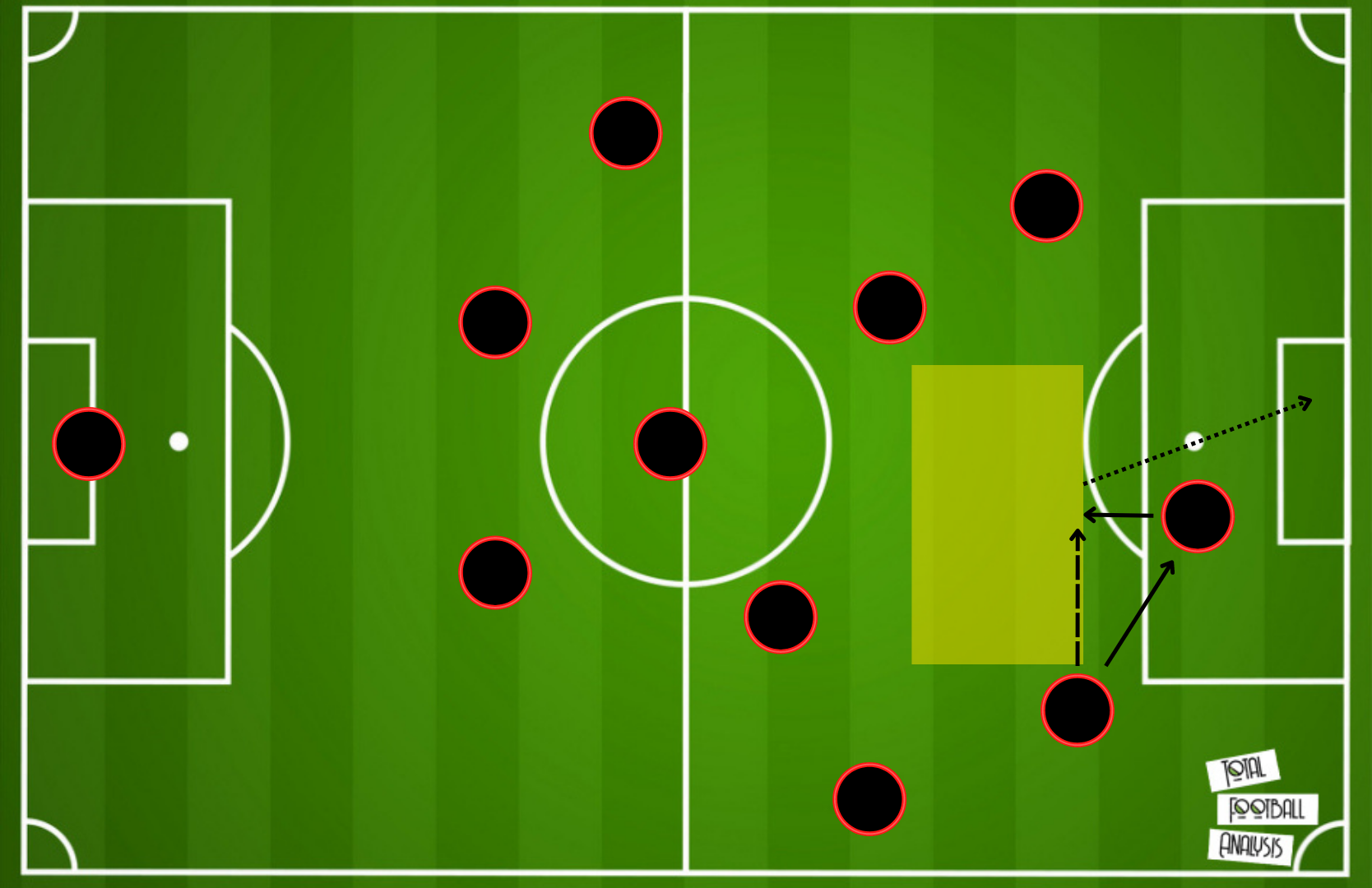 However, option 2 and option 3 are more likely to happen. With Alexander-Arnold providing world-class crosses from the right-wing and Nunez located in the left-wing area at the second post, Liverpool will be a threat after crosses.

At just 22, Darwin Nunez has a lot of football ahead of him. His combination of powerful running, his athletic frame and accurate finishing will allow him to score goals at every level and he’s only going to get better.

He’s already scored against the likes of Barcelona and Bayern Munich in Europe’s top competition showing that he’s already got the mentality to play at the Premier League level as a good last-line goalscorer. He is not massively involved in moves but always appears at the right time like we’ve seen time and time again from some of football’s greatest number ‘9’s.

Nunez brings lots of flexibility to the tactics of Liverpool making it even more difficult to play against them. 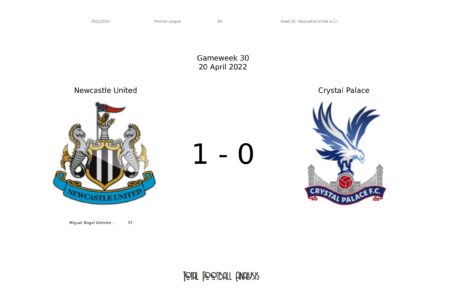 Wednesday evening saw Newcastle United welcome Crystal Palace in the Premier League. We’ve broken down all the key stats for […] 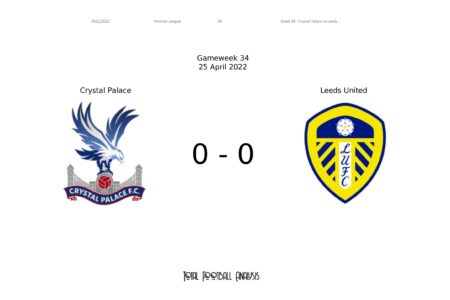 Monday evening saw Crystal Palace welcome Leeds United in the Premier League. We’ve broken down all the key stats for […]