Jorge Jesus 2022/23: Can the Portuguese coach take Fenerbahçe back to the top? – tactical analysis

In May 2019, Jorge Jesus was appointed as the new manager of Flamengo. In a brief stint, the Portuguese created one of the most legendary teams in Brazilian football history. In a little over a year, Jorge Jesus had won five titles and lost four matches. For the first time in a very long time, the manager was bigger than any player in a completely star-filled squad. After leaving for Benfica, Jorge Jesus found some success but not quite to the same level as he had in Flamengo. Six months after parting ways with Benfica, he has been appointed as the new manager of Turkish giants Fenerbahçe.

Despite being one of the biggest clubs in Turkish football, Fenerbahçe have not enjoyed any success in nearly a decade. They have not won any trophies since 2014 and are considered by many as a sleeping giant. With the superstar manager Jorge Jesus, Fenerbahçe aim to reach similar success as Flamengo and rise back to the top of Turkish football. With intense attacking tactics, Jorge Jesus will hope to deliver the excitement and success supporters have desired for a long time.

In this tactical analysis, we will examine Jorge Jesus’ playing style and tactics throughout his time with Flamengo and Benfica. More specifically, this analysis will look at defining aspects of teams managed by the Portuguese in order to determine how Fenerbahçe will look in the 2022/23 season.

While formations, in general, are not as relevant as they used to be, Jesus has a couple of favourite ones worth noting. With how dynamic football has become, teams are no longer adhering to a rigid shape throughout most of the match. On the contrary, most teams have defining principles that guide the collective behaviour from an initial formation or structure. In other words, it is a lot more complex and fluid than a few simple numbers.

Throughout his time with Flamengo, Jorge Jesus used a 4-2-3-1 45% of the time. Many other variations and shapes were used depending on specific oppositions and scenarios, as seen below. 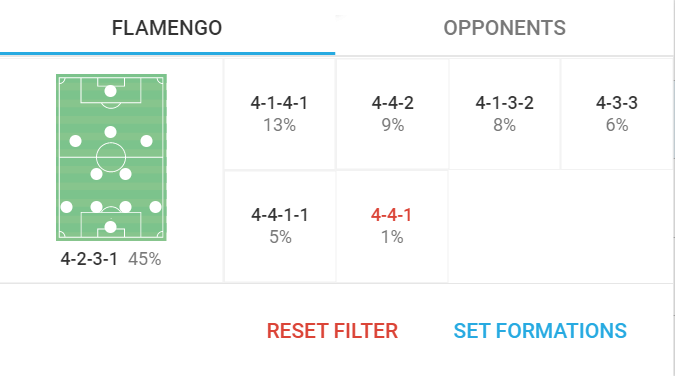 To a larger extent, a similar tendency was followed with Benfica. Jesus had an initial 4-4-2 structure which he used most of the time. However, he also used nine other formations. Most significantly, the 3-4-3 had a brief spell towards the end of the 2020/21 season. 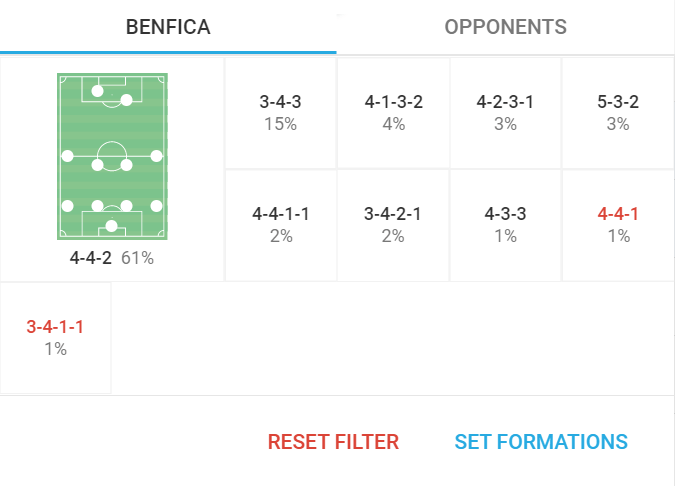 Jorge Jesus has a general structure he likes his teams to follow, regardless of the formation. We will look at this preferred structure next, but as far as formations, he is not afraid to switch around and experiment with different shapes.

In the attacking phase, Jorge Jesus likes his teams to stay significantly narrow, or at least compact. This structure complements the behaviour and strategy of his teams. While we will identify these specific tactics in the next section, it is important to first understand the structure and distribution of players used by the Portuguese.

Jesus likes a very fluid and collective style of football. With the ball as a reference point, players are constantly floating near and between themselves in order to create passing lanes and combine. As a result, the general structure of the team is relatively narrow, as seen below in one of Flamengo’s matches. The average positions of the players are very close to each other. 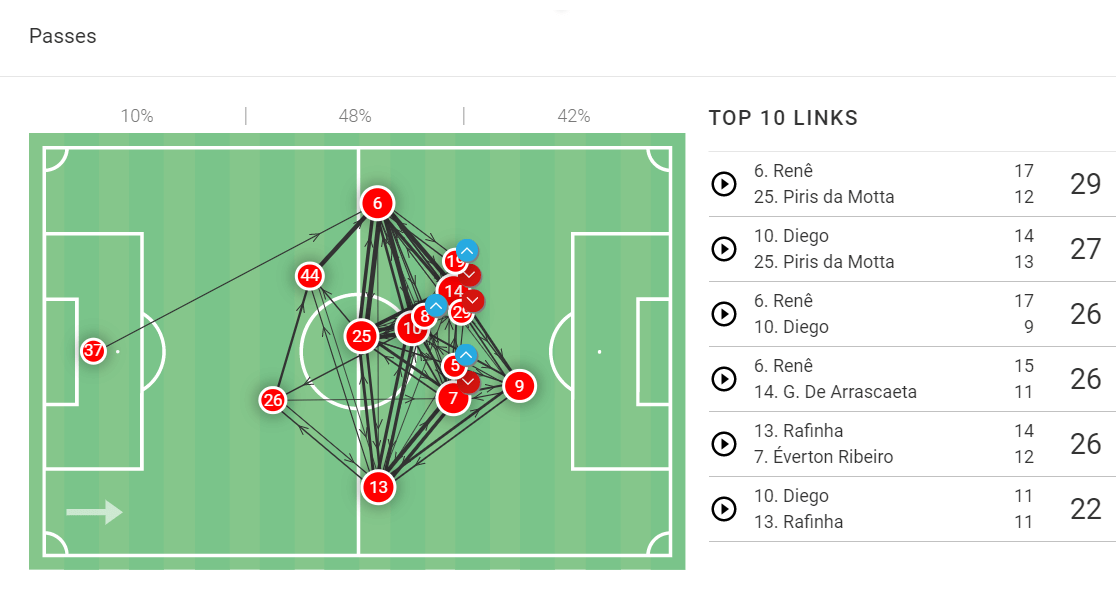 In order to further illustrate this structure, we can examine his build-up with Benfica. As seen in the formations, Jesus most often adopts a build-up with a line of four. The centre-backs split the area while the fullbacks are high and wide. Another characteristic of his build-up is the use of a single pivot. Ahead of the centre-backs, a single pivot will drop to provide support and dictate the build-up. Further ahead, wingers and midfielders will float between themselves to provide support and create passing lanes.

In the example below, we are able to see the line of four highlighted. Furthermore, a pentagon of sorts is created with the ball carrier as the reference point. This creates numerous passing lanes and becomes very difficult to defend. If the ball is lost, they already have a significant number of players there to prevent immediate danger and recover it. 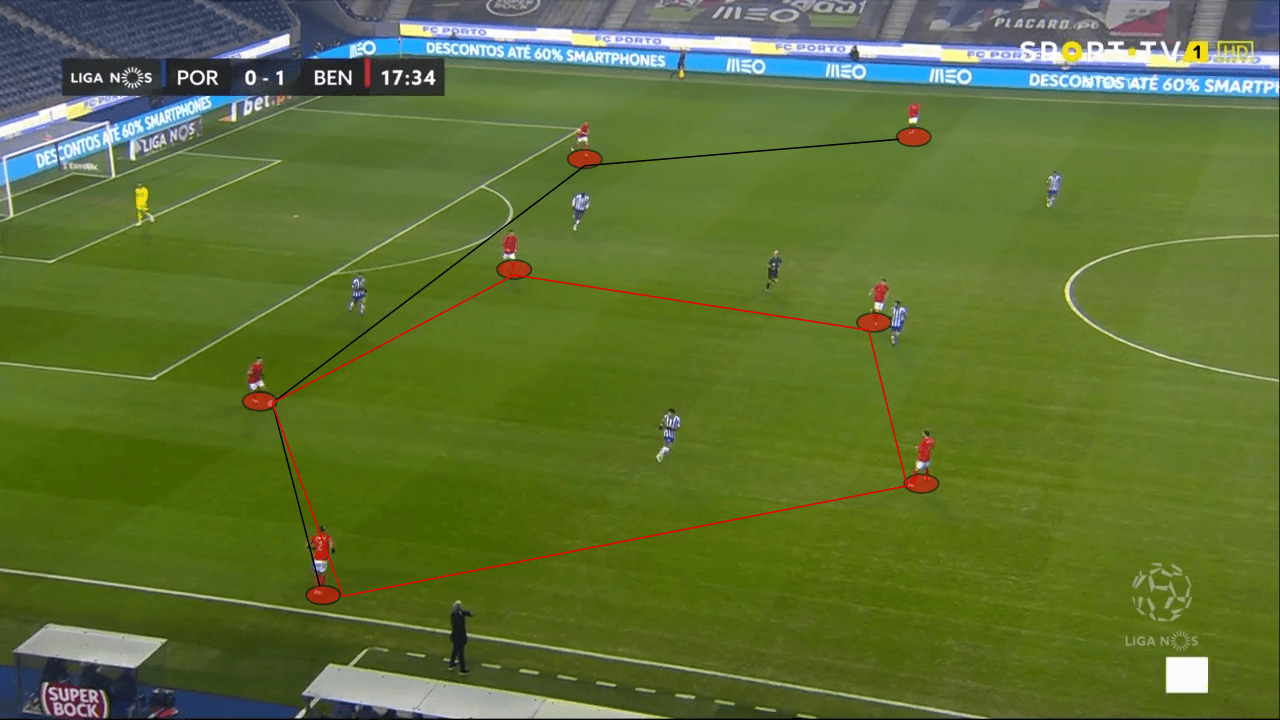 A variation with a line of three has also been used by Jorge Jesus, especially at Benfica. Depending on the pressing structure used by the opposition, this variation may be more effective. Nonetheless, it is always good to have more options and variations. In the example below, we are able to see a backline of three as well as three players offering support to the ball carrier. 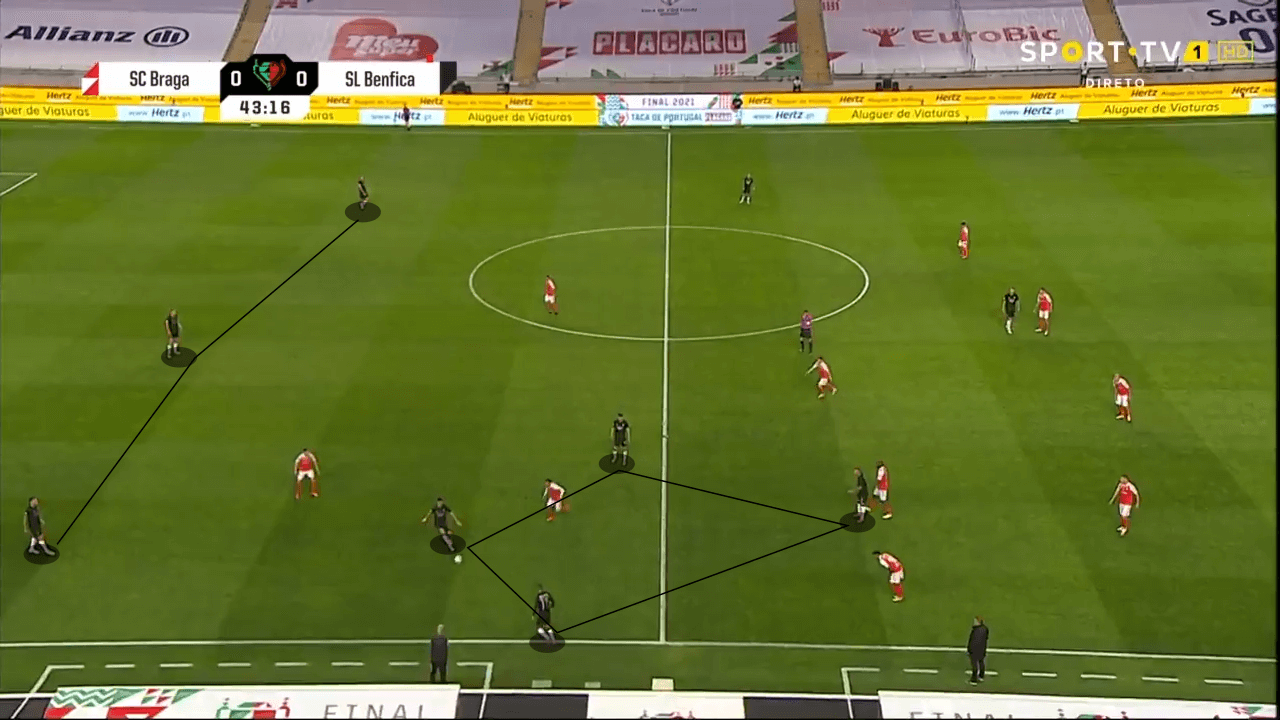 This trend is consistently seen throughout his teams. With the ball, players are constantly offering support around the ball. What makes this structure so effective is how fluid it tends to be. While there are a few immediate players offering support, others will rotate with them and float around to disrupt the defensive organisation. 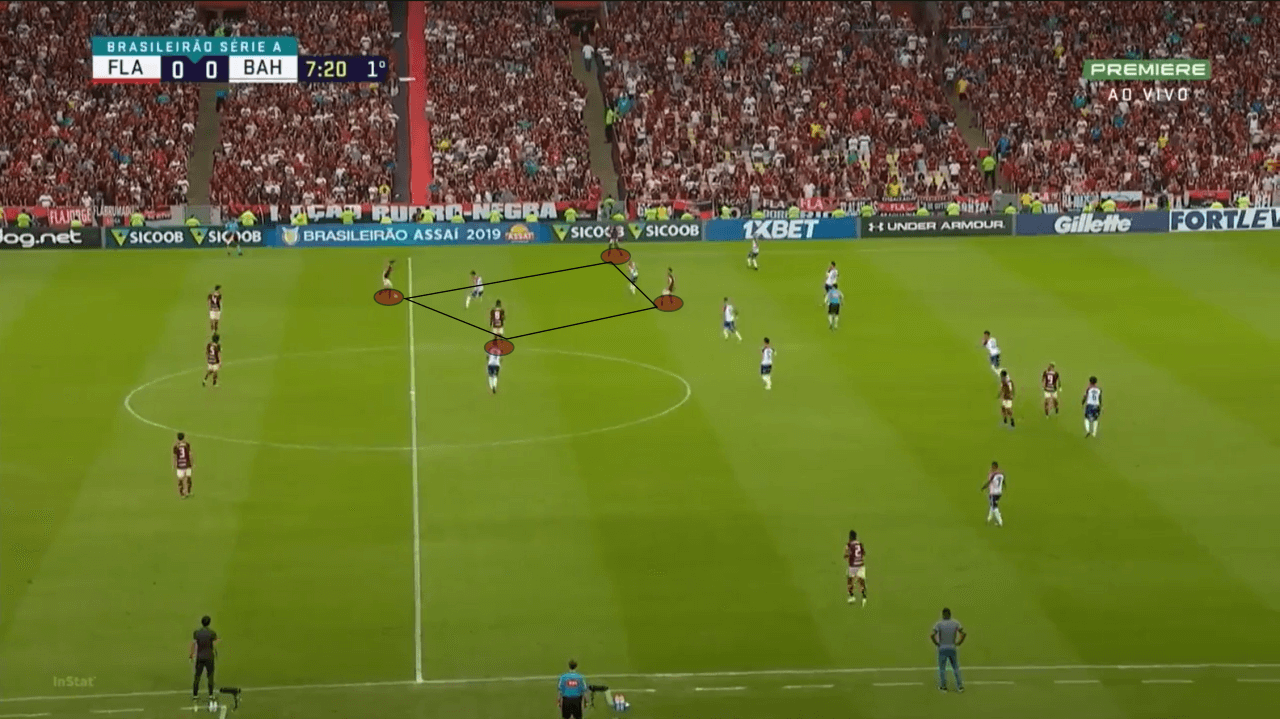 Against Arsenal, Benfica’s possession displayed this concept once again. In this scenario, we are clearly able to see the numerical superiority it creates in the given area. Below, they are able to create a 5v2 in this section and advance out of this zone. By creating these overloads in possession, they are able to advance in a controlled fashion as a unit. 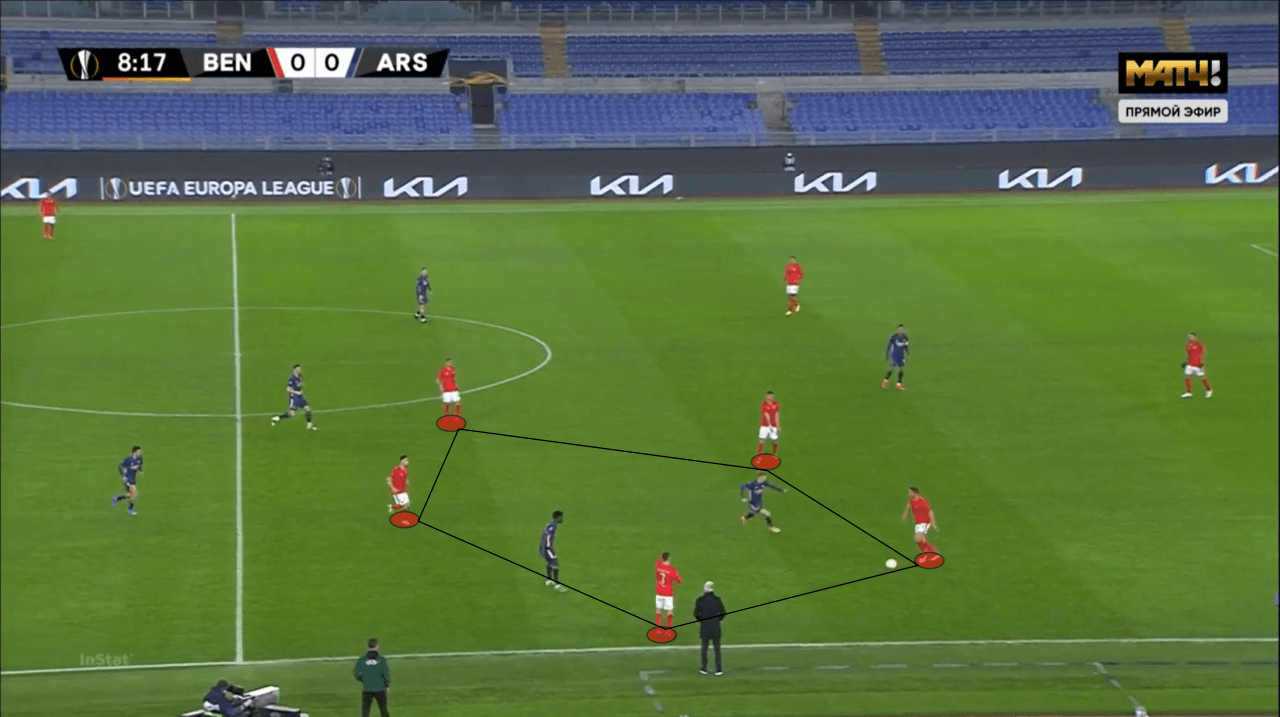 In a general oversimplified statement, Jorge Jesus’ teams are labelled as intensively attacking. This heavy-metal style that fans have enjoyed so much is mostly due to the directness and verticality of his teams. This general verticality is composed of a few aspects. First, the passing style of his teams tends to obviously be direct and progressive. Additionally, players are constantly moving behind defensive lines to create passing lanes and offer this vertical pass desired. Another aspect has to do with the structure seen above. Combining is a significant aspect of his teams, and after breaking lines, immediately combining and moving the ball again is essential.

Movement behind the lines is essential for this verticality to work. This movement, though, cannot be predictable and repetitive. In order to do so, players are much more fluid between themselves. Players will rotate between themselves and check for the ball in different areas. In the example below, the former Internazionale centre-forward Gabriel Barbosa checks for the ball in between the defensive midfield line. 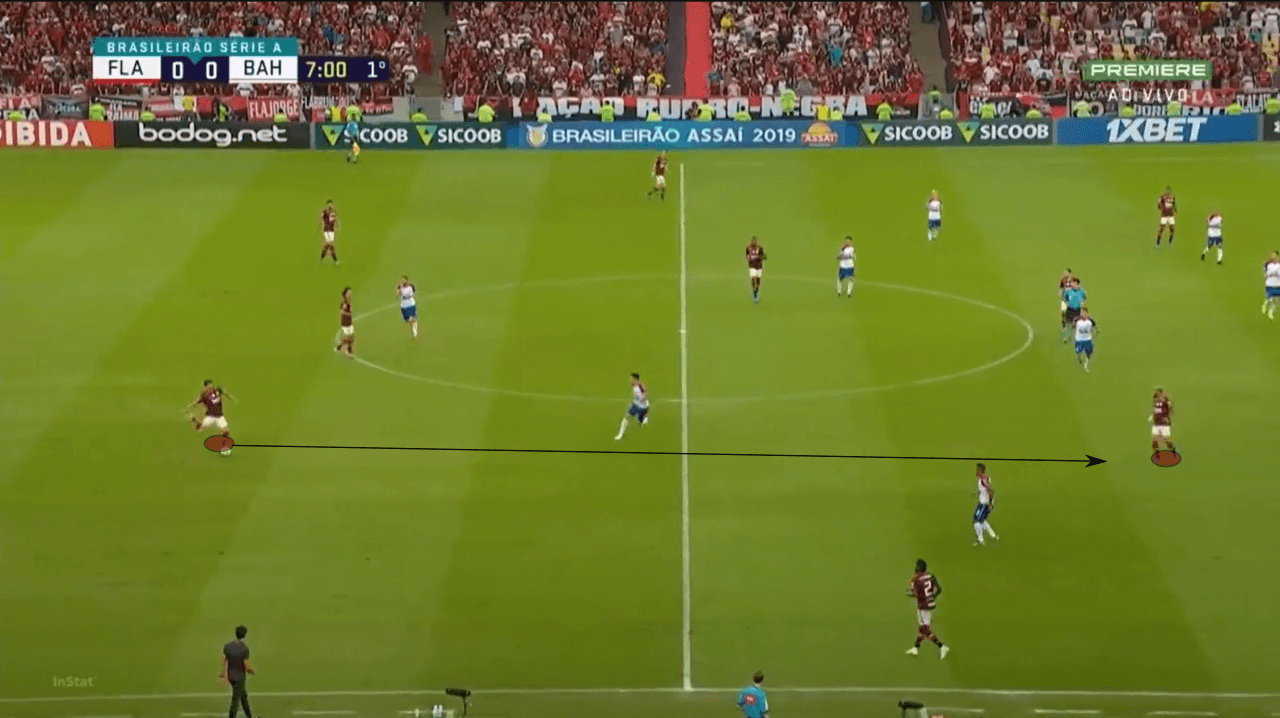 After receiving it, he immediately turns to the wing where there are two players already there. He creates this triangulation and 3v2 on the wing which is in line with their strategy. 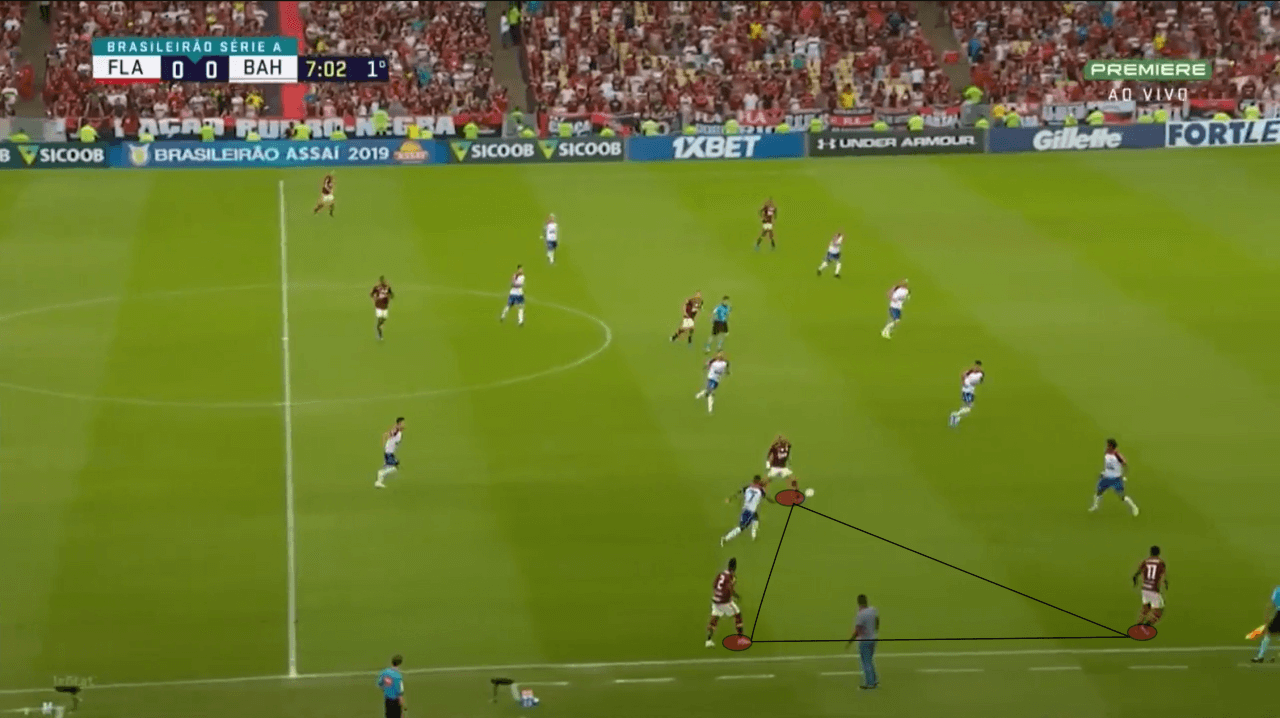 With Benfica, a similar sequence can be looked at. While the current Arsenal defender Nuno Tavares has the ball, a player checks in from deeper to receive the ball. This trend is prevalent in Jorge Jesus’ teams, where players constantly check for the ball between the defensive lines. If they don’t immediately receive it, they move again for another player to check-in. This constant movement is not only very hard to track, but it also disrupts the defensive organisation. 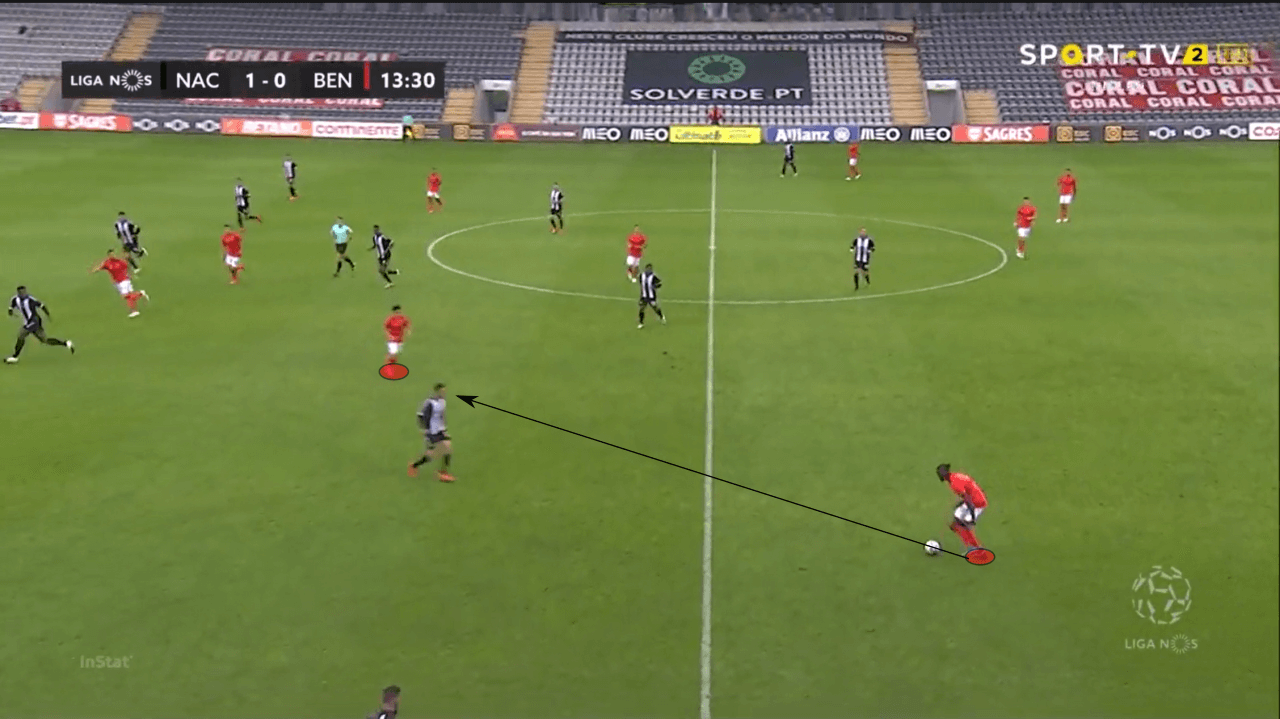 After receiving the ball, the player turns. As soon as he turns, one of the forwards immediately makes a run and attacks the space behind. With two passes, they are able to progress from just before the midfield to the final third. 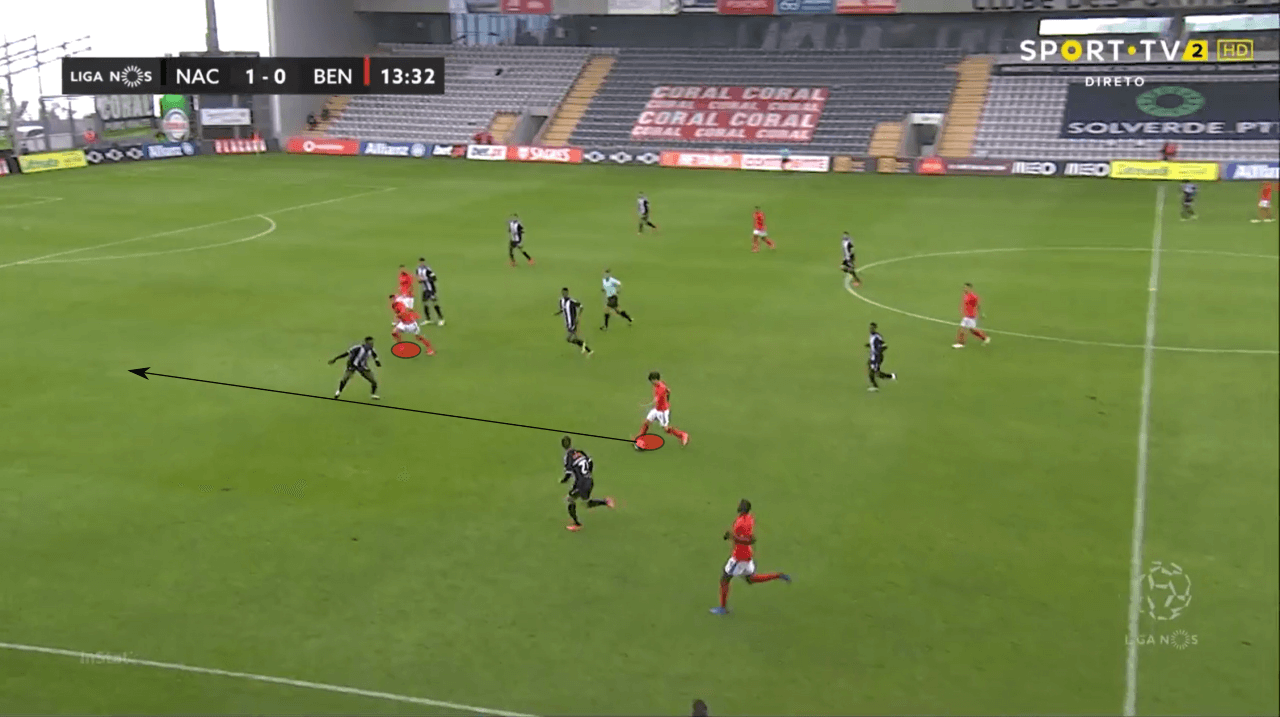 Undoubtedly, breaking lines with frequency and verticality is one of the main characteristics of teams managed by Jorge Jesus. In the 2019 Brasileiro, for example, Flamengo averaged 79.18 progressive passes per 90 from their 472.63 passes per 90. However, they still maintain a high level of control. At the same time, only 7.37% of their passes were long with an average pass length of 19.17m. This shows how they are constantly looking to break lines and be direct, but with a certain control rather than just launching it forward.

There are other concepts which characterise Jorge Jesus’ attacking system. For instance, the constant search for space and the consequent willingness to attack this space. As we’ve seen, Jesus prefers constant approximation around the ball. As a result, this overload naturally attracts a significant number of defenders near the ball and creates a lot of space elsewhere. In the instance below, for example, the centre-back finds a midfielder who instantly switches it to the opposite fullback with a lot of space to attack. 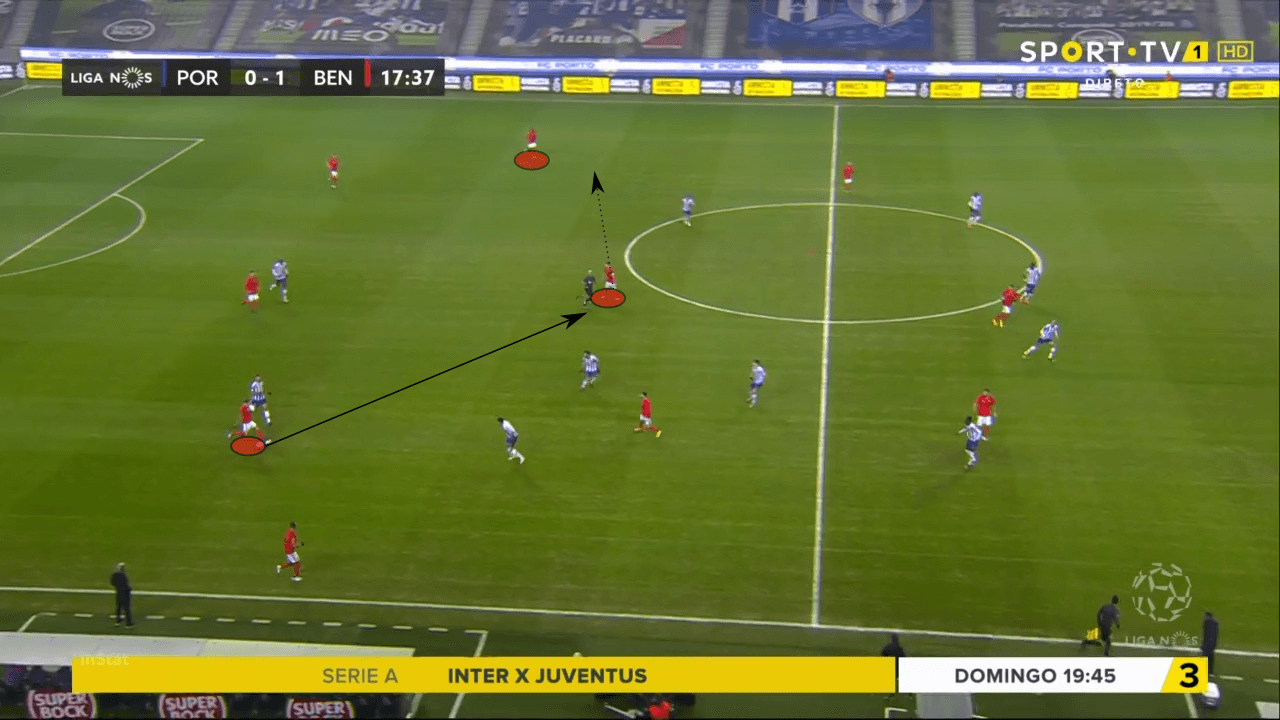 In this other example, the same concept is explored, now with three centre-backs. As the ball gets switched to the wide centre-back, there is a lot of space ahead of him to attack. As soon as he receives it, he drives forward and makes a defender commit to him. 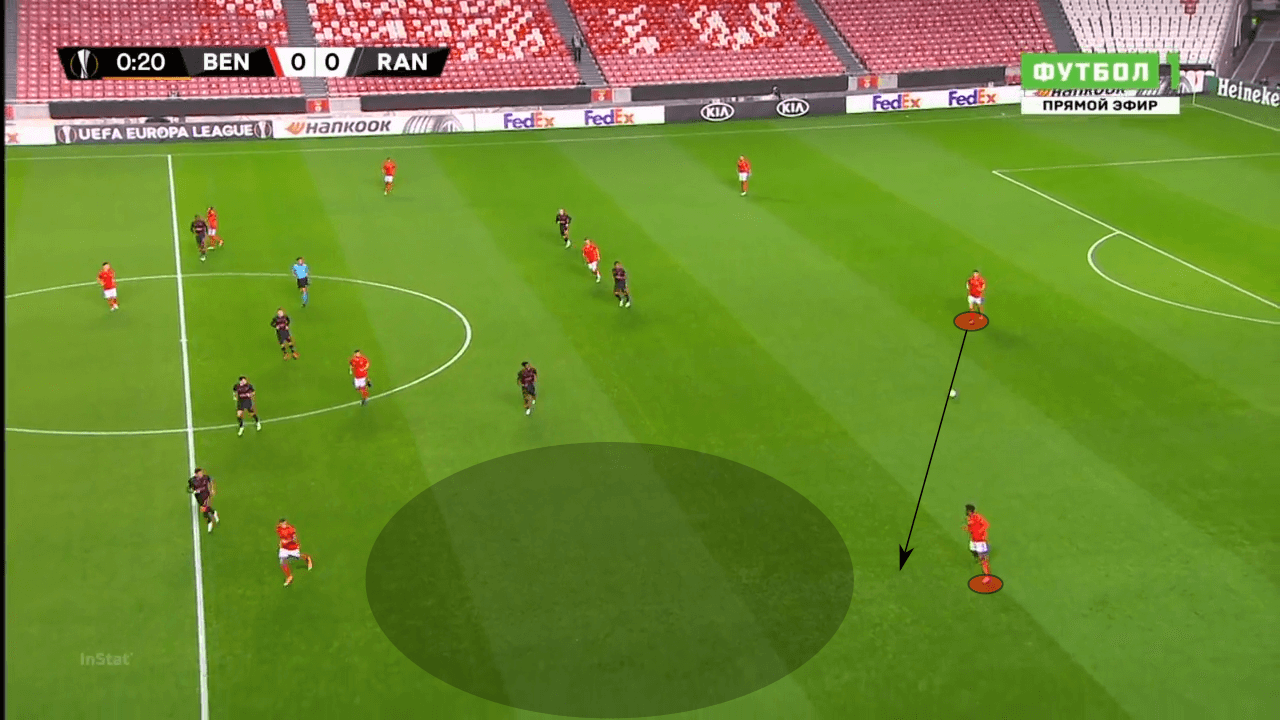 Another key aspect of the Portuguese’s attacking system is the frequent combinations. As the players are often very near each other, quickly combining is an effective way to progress through the defensive organisation. In the example below, a quick combination of three passes allows Benfica to successfully find the centre-forward in a dangerous position. 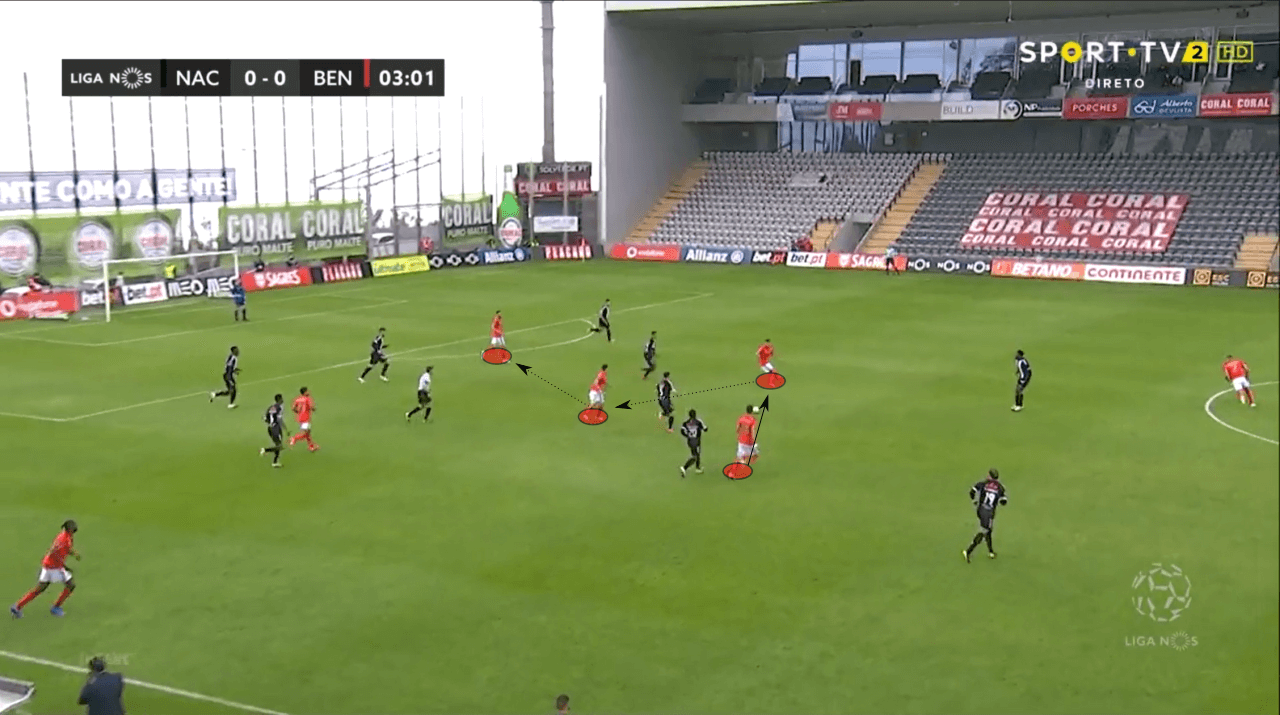 As in the attacking phase, Jorge Jesus’ defensive system is frequently labelled as very intense. This is due to the aggressiveness and intensity of their high-press. Without the ball, the objective is not only to recover it as soon as possible but possibly create goalscoring opportunities from this press. In the 2019 Brasileiro, Flamengo maintained an impressive PPDA of 7.88. Furthermore, they had the second-highest challenge intensity, only behind Jorge Sampaoli’s Santos. One of their recoveries map in 2019 further illustrates how intense and advanced Jesus’ defensive system is. 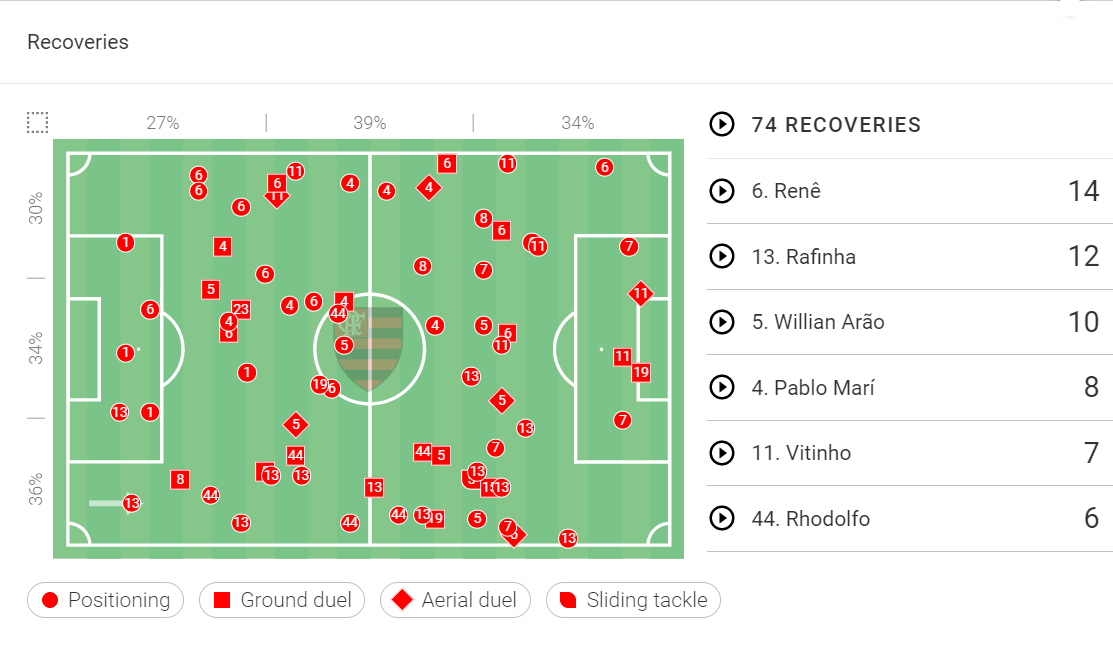 The structure with which they press is fairly simple. While roughly maintaining a man-to-man organisation, they aim to compress and congest the opposition’s playing area. After the opposition plays it to either side, the objective is to cut the other side off and pressure them using the touchline as an extra defender. 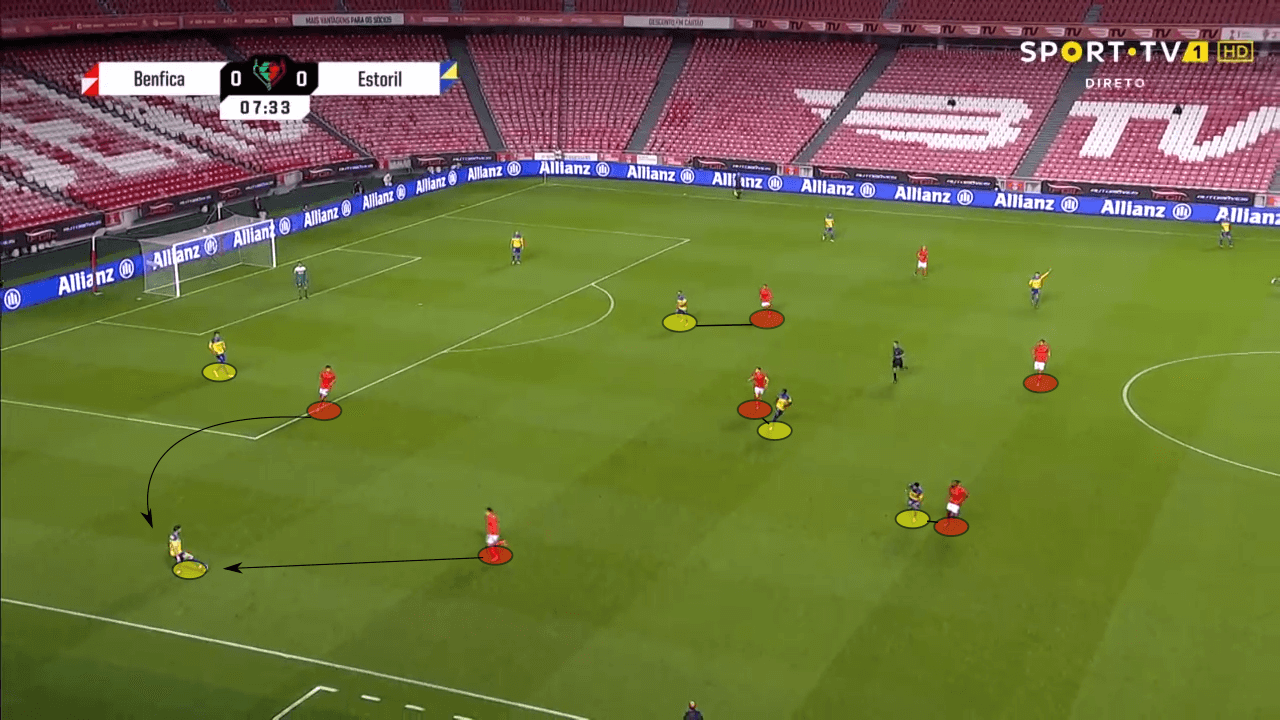 In the same match, another example can be looked at. After the opposition plays it to the left side, Benfica shifts their whole defensive block to pressure them. While two players press the player receiving the ball, the others aim to eliminate passing options by man-marking them. 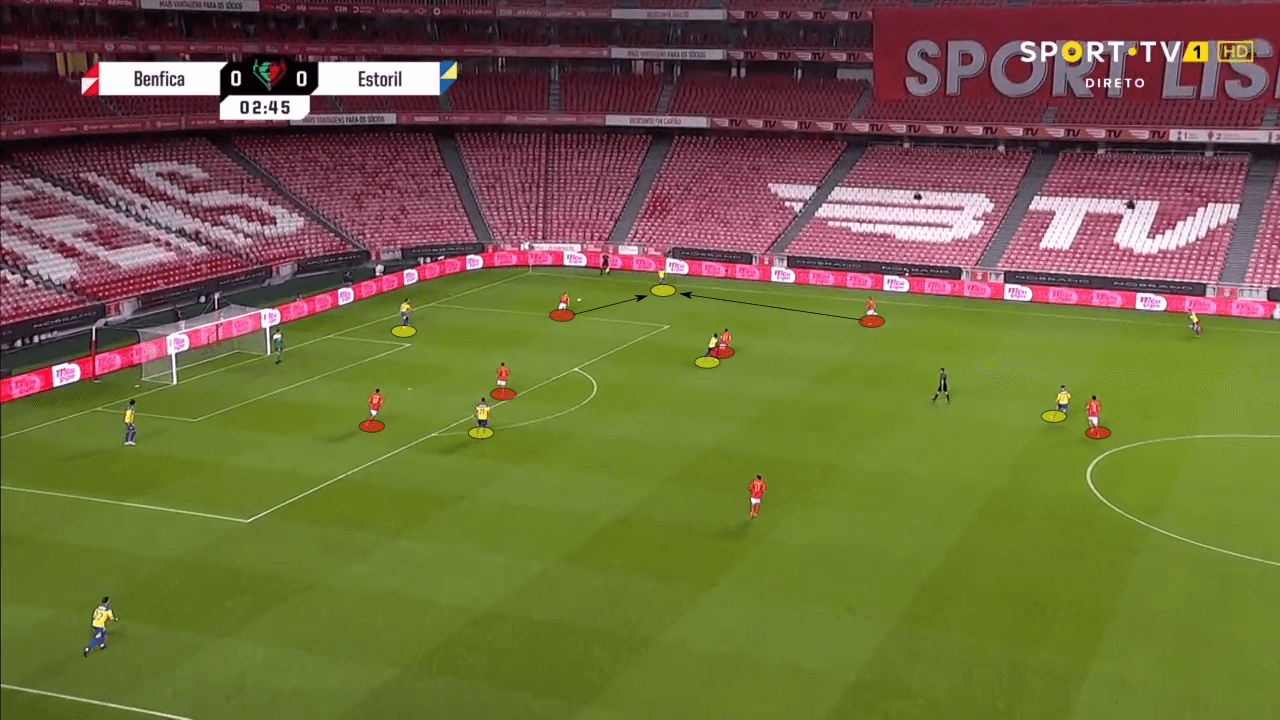 Counter-pressing is another significant aspect of Jesus’ teams. It prevents, or at least delays, the opposition from launching a dangerous attack. While it gives them the chance to immediately recover the ball, it also generates time for other players to get organised. In the instance below, after losing the ball, four players immediately rush Grêmio’s player. 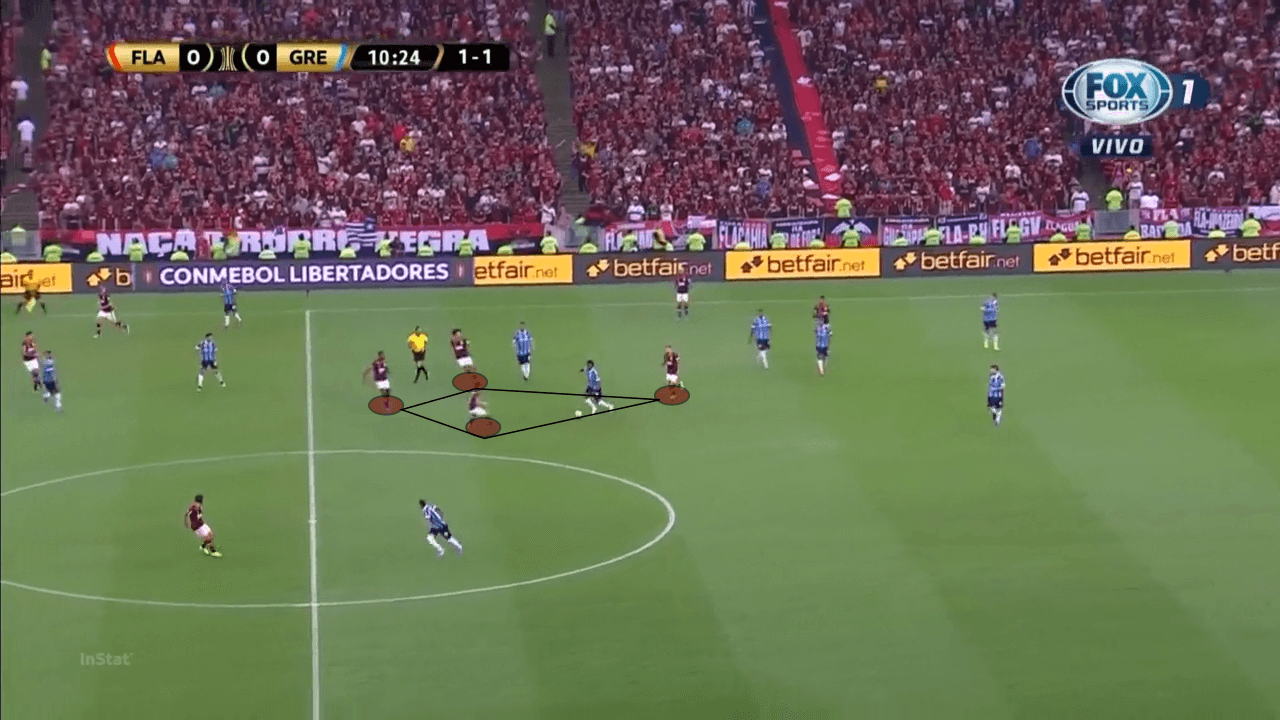 While specific details such as player roles, formations, and more will be different at Fener, Jesus will maintain the same tactics and principles which he has used throughout his career. Certain aspects such as verticality, approximation, combinations, general attacking structure, and the high-press will definitely be seen in Jesus’ Fenerbahçe. The expectations are very high as Jesus is tasked with bringing glory back to Şükrü Saracoğlu Stadium.