Marin Pongracic: Why the Croatian centre-back is a low-risk option to bolster Dortmund’s defence – scout report

With Wolfsburg completing the signing of Sebastiaan Bornauw from FC Koln, it triggered a sequence of signings across the league. FC Koln subsequently replaced the outgoing Bornauw with Timo Hübers, and with Wolfsburg’s centre-back options becoming a touch more crowded, Borussia Dortmund sensed the opportunity to prize Marin Pongračić away.

The Croatian centre-back has shown plenty of promise at Wolfsburg, but has struggled to truly cement himself in the starting line-up. A move to Dortmund, where his fellow countryman Marco Rose (who previously worked with Pongračić at RB Salzburg) is in charge made plenty of sense for both sides. For Pongračić it was a chance to link up with a former coach, get a fresh start, and still have the opportunity to compete in Europe and challenge for domestic trophies too, alongside Wolfsburg, Leipzig and Bayern et al- whilst for Dortmund it was a chance to provide a much-needed bolster to their defensive options, giving them cover at centre-back and right-back.

Dortmund have failed to give themselves ample squad options in either role, and whilst Rose may have preferred to have signed one more defender, Pongračić’s arrival will make him somewhat more comfortable about his defender shortage. This tactical analysis and scout report will provide an overview of Pongračić’s various abilities and tendencies, whilst giving a brief analysis of the tactics the 23-year-old defender may find himself adjusting to.

Pongračić predominantly plays as a right-sided centre-back, however, he played a fair amount on the left side of Wolfsburg’s centre-back pairing last season, and looked comfortable enough doing so. He also has experience playing as a right-back, and will likely provide cover for Dortmund in this position too.

Whilst Oliver Glasner, who has since left Wolfsburg, initially played with a back three with Die Wolves, he changed to a back four, and Pongračić therefore has experience of playing in both systems at the Bundesliga level. His ability to play comfortably in a back three will provide Rose with some flexibility in his backline.

Pongračić generally anchors possession in the backline, sitting deep, and rarely venturing forward with the ball into the opposition half. He may sit inside the opposition half during advanced attacks, but is relatively reserved with his overall positioning, as the heat map below testifies. 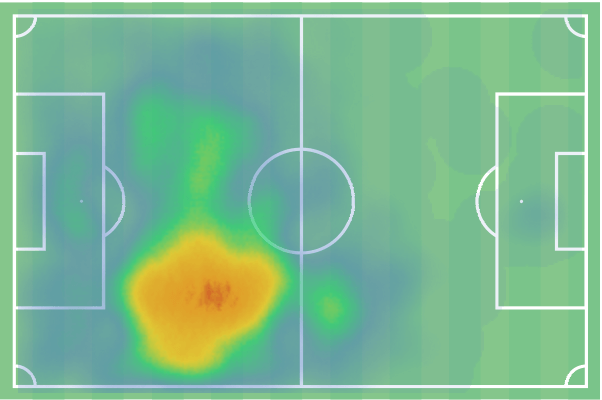 Pongračić doesn’t have any obvious positional issues, consistently maintaining good distances between himself and his defensive teammates either side of him. Equally, he keeps ample distance between himself and the midfield in front of him, and shows an anticipation and aggression to step out of the backline and press any ball-carriers operating between the lines. He isn’t reckless with this, however. Pongračić will generally only step forward if he’s confident a full-back or central-midfielder can cover him to ensure the backline maintains a numerical superiority. 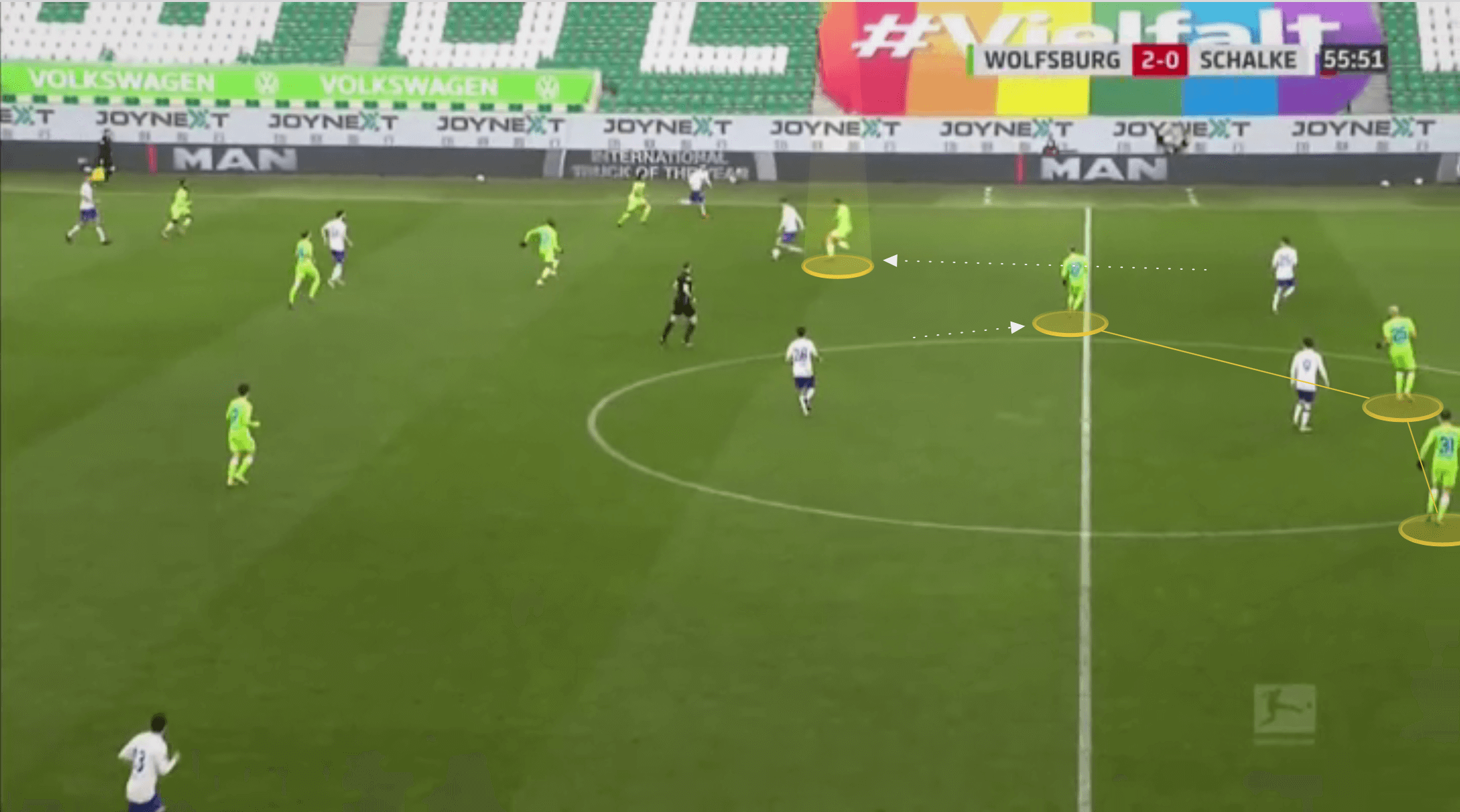 Pongračić’s defensive positioning and anticipation of danger can be seen when covering space in behind the backline too. In the possibility an opposition player may look to hit a through pass, Pongračić immediately takes the correct side-on position, maintaining an awareness of players either side of him, and is ready to cover that space should the through pass be played. 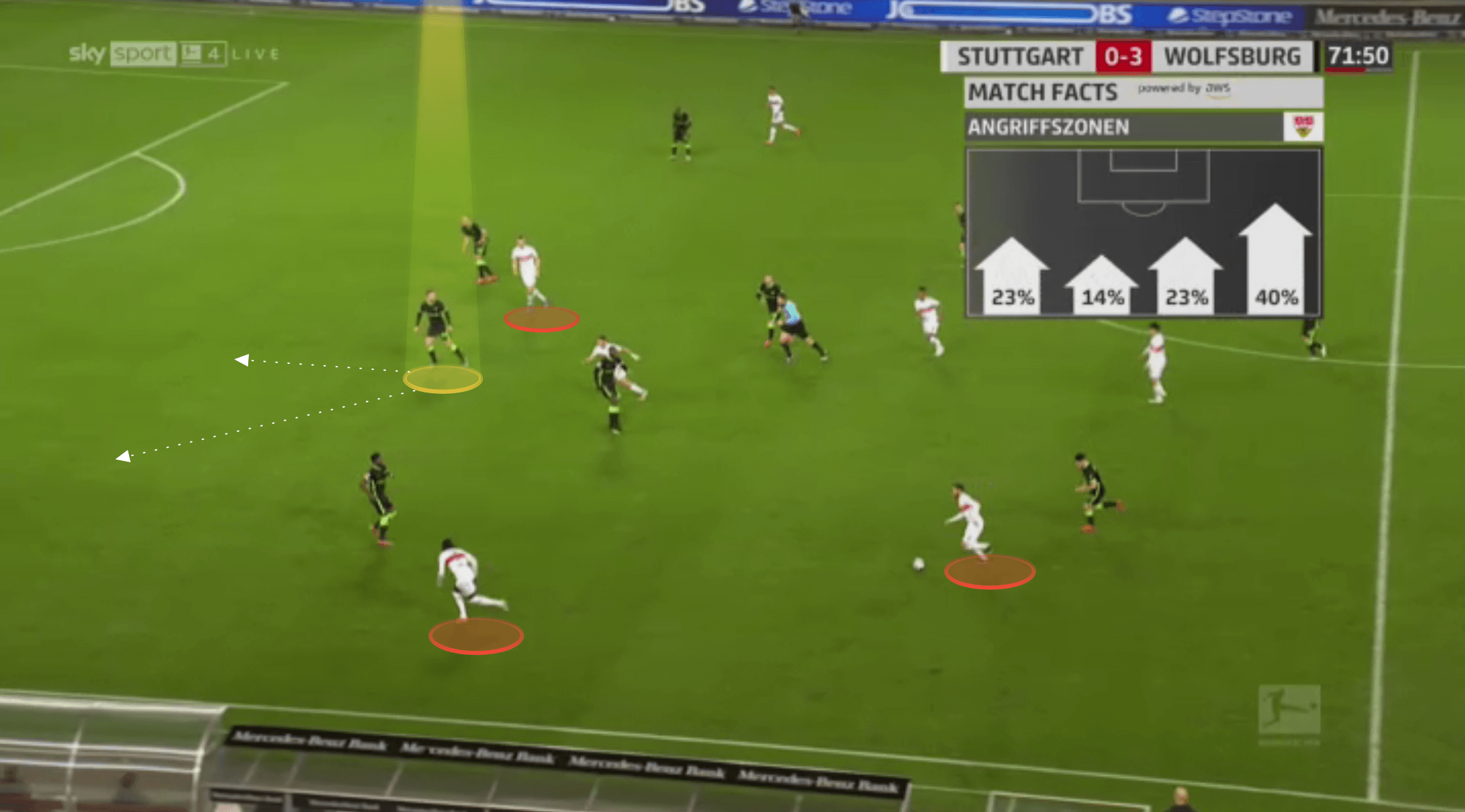 He possesses the pace to cover these areas, but whilst he anticipates the ball in behind he is still able to adjust his positioning to step forward and cut out any passes in front of him too. Such a situation can be seen in the example below, where he is ready to cover a through pass played behind his backline, but still has enough of an open body and a positioning which will allow him to change his direction if necessary. 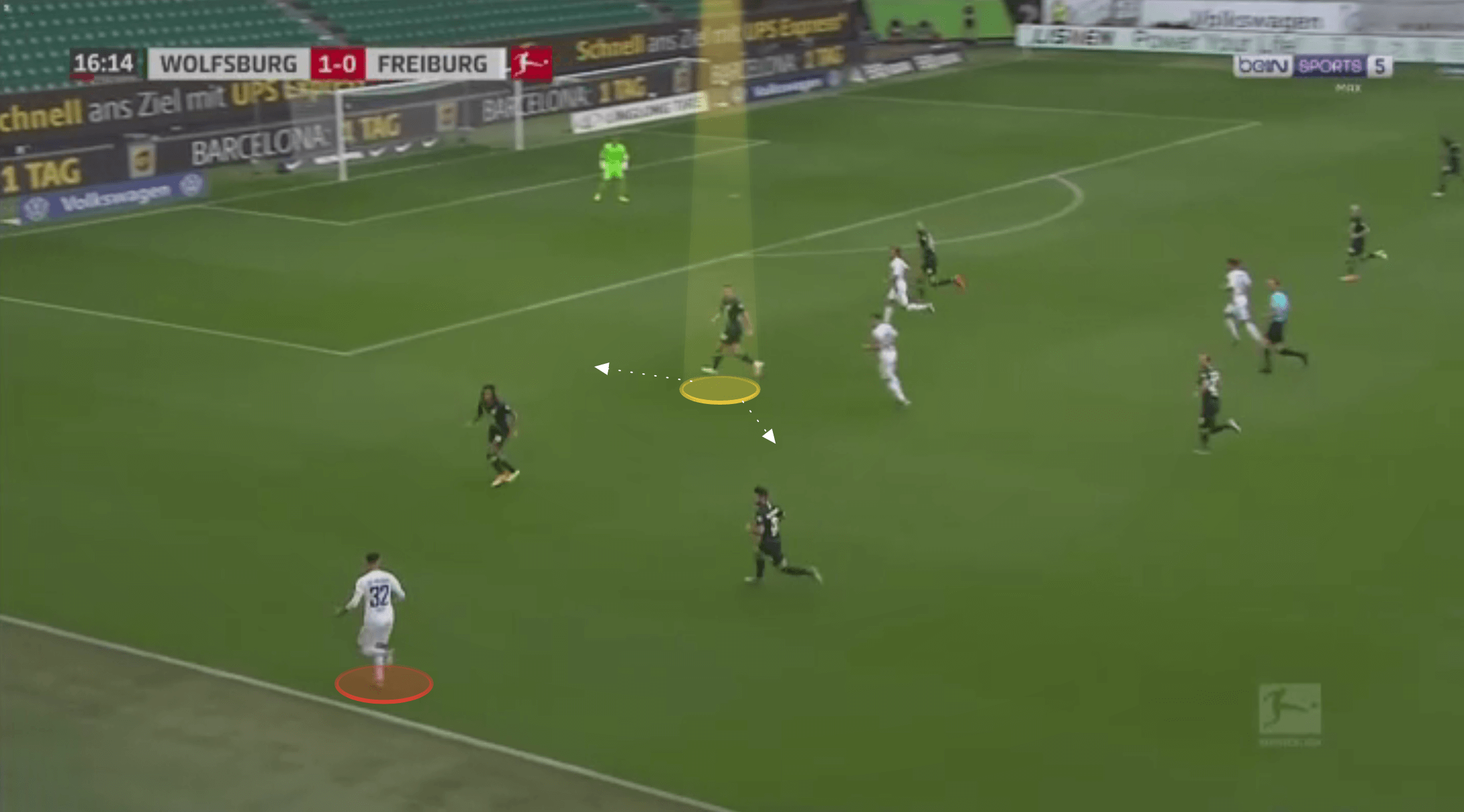 In this case, he does change direction, stepping forward into the highlighted space and making the interception, getting to the ball before the Freiburg forward. 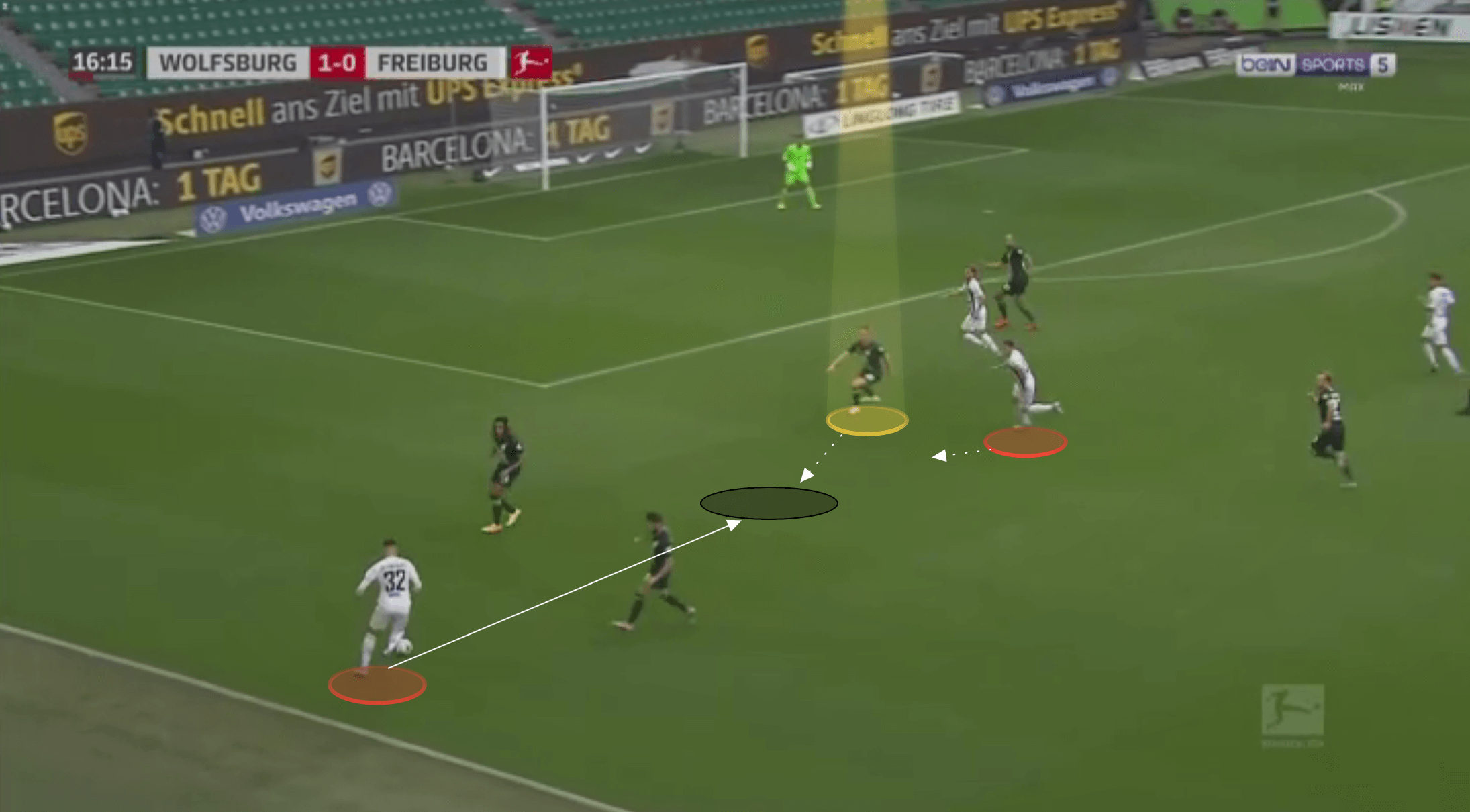 Before looking at any in-game example of Pongračić’s performance in defensive duels, it is perhaps pertinent to examine his data in the context of the entirety of that of the Bundesliga centre-backs from last season.

The graph below shows us Pongračić averaged a well above average volume of defensive duels with just over 7.5 per 90. Whilst not as noticeably above the league average, his 68.53% win percentage on these duels is nevertheless excellent, and the plot size indicates that his 8.47 padj. interceptions is perfectly respectable too. 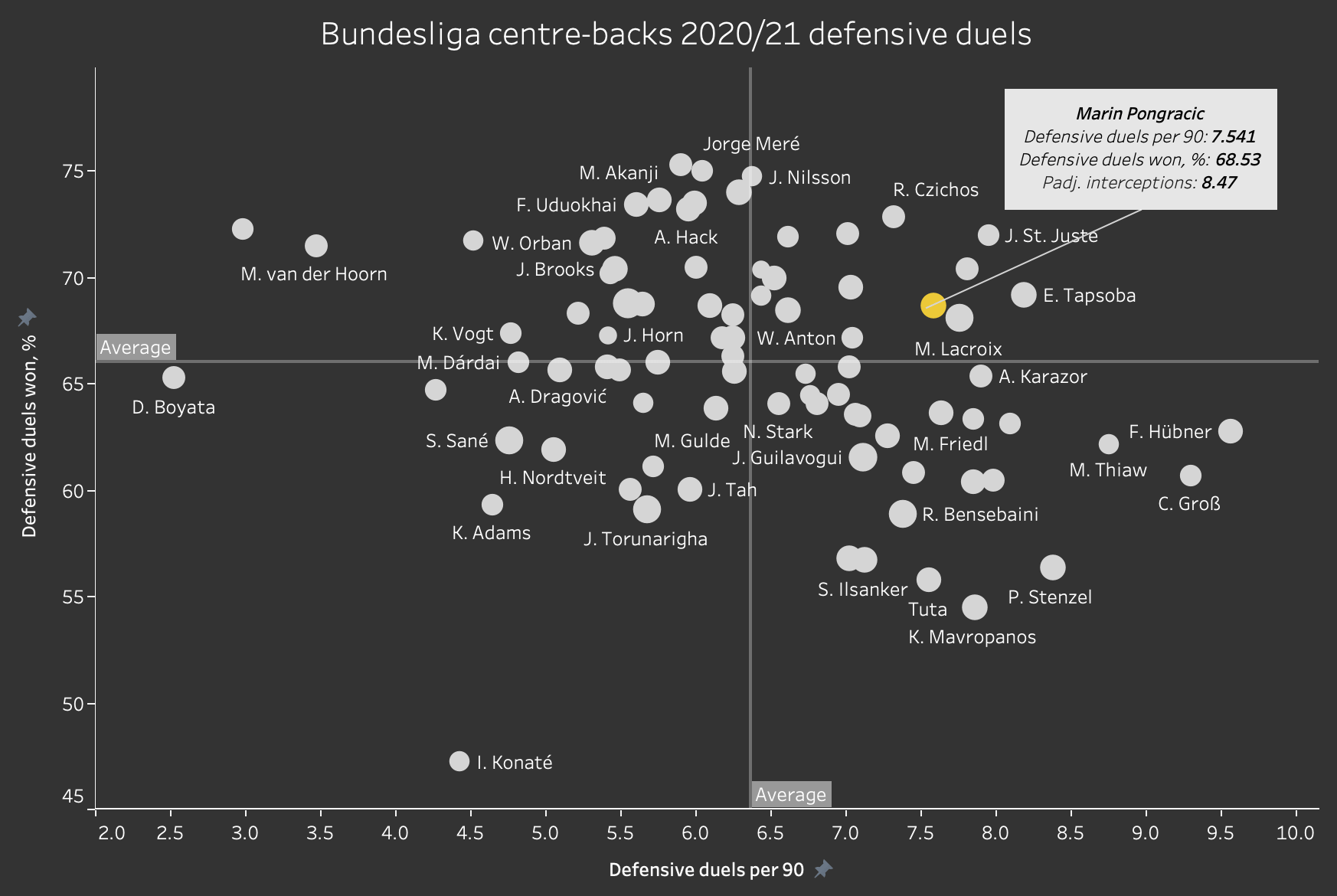 Taking a glance at his performance aerially, Pongračić was involved in a lower than average volume of aerial duels compared to his league peers, with just 3.104 per 90. However, his 66.77% completion on these is very impressive, leaving him well above the league average, and truly in the upper echelons of win percentage for Bundesliga centre-backs in 2020/21. 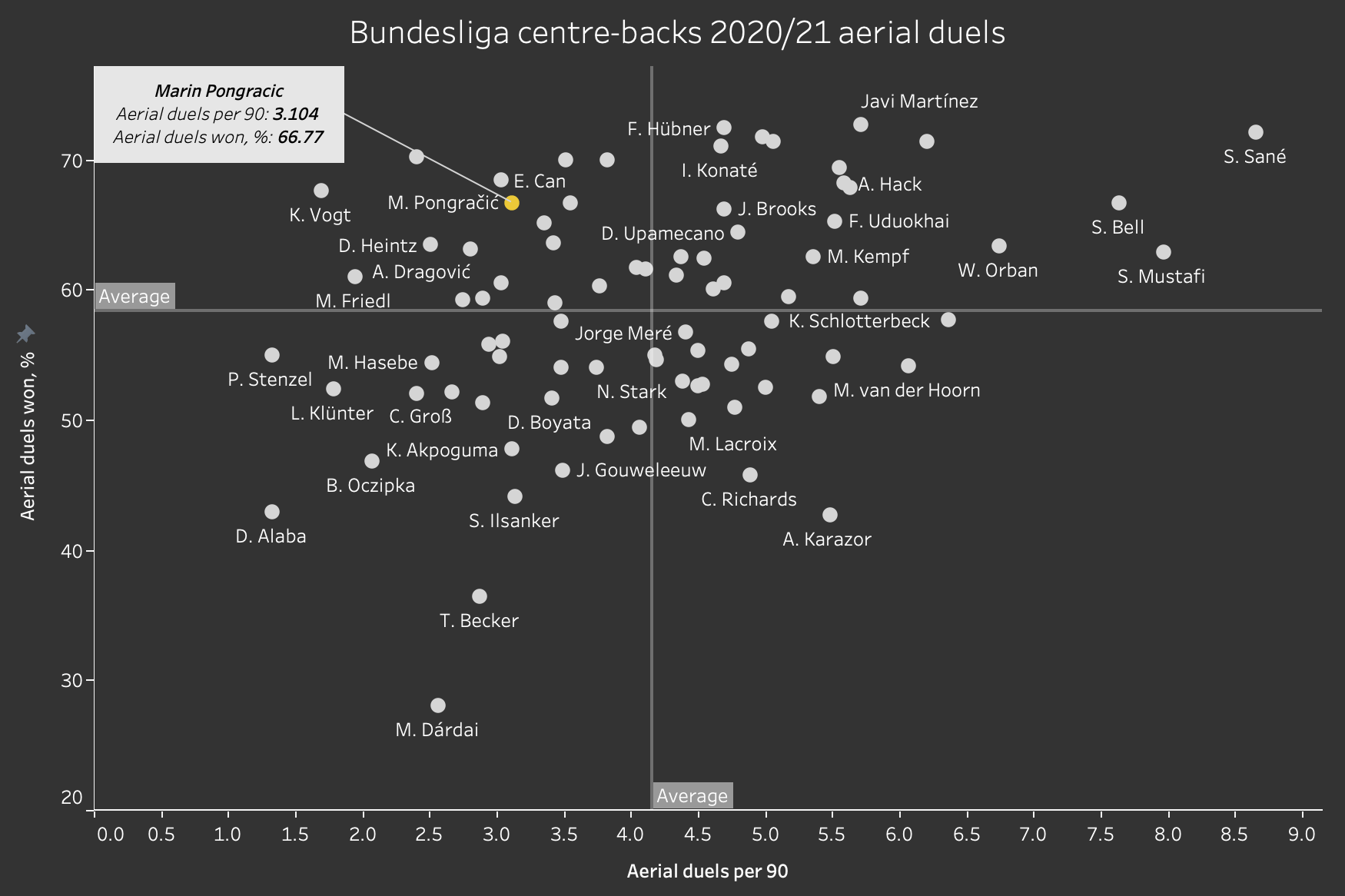 Pongračić reads the game well, and as alluded to already, shows an excellent anticipation of potentially dangerous situations, or even just the opportunity to win the ball. He isn’t rapid but still possesses a quality top speed for a centre-back and is able to cover most forwards in 1v1 foot race. He doesn’t often look to catch players offside, instead backing himself to cover this player as the through pass is played, and due to his strong anticipation he will turn and begin to cover this ground moments before the pass is played. He moves at an angle rather than in any straight line. 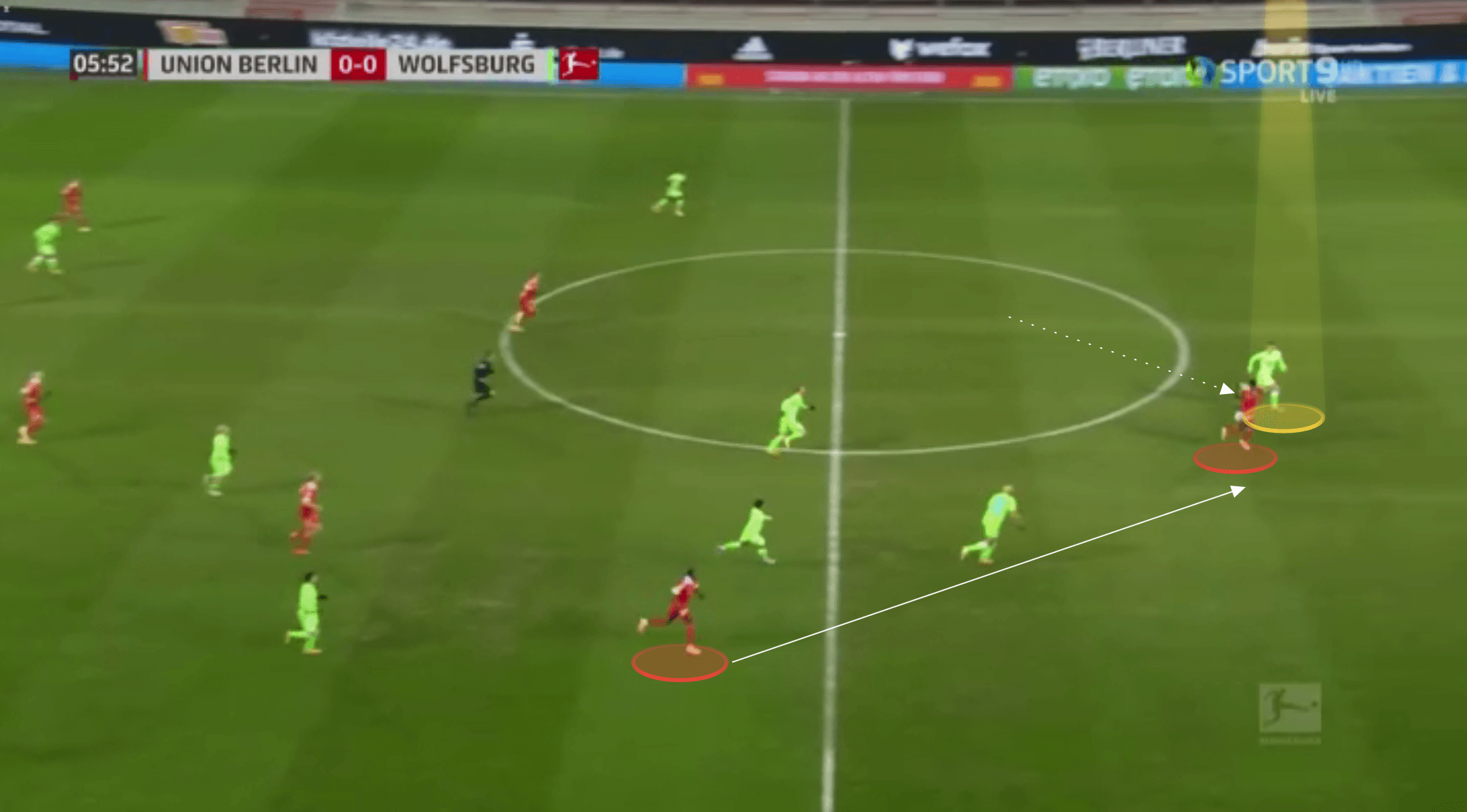 Pongračić possesses good strength and is able to unbalance attackers when looking to make a tackle without crossing the line into giving away a foul. A simple arm away normally suffices, and Pongračić shows an ability to consistently get his body between the ball and the opponent. He shows good mobility and agility, and can turn sharply away from the attacker as he makes the interception or tackle, before quickly moving the ball away from any potential counter-press with a sharp, short pass. 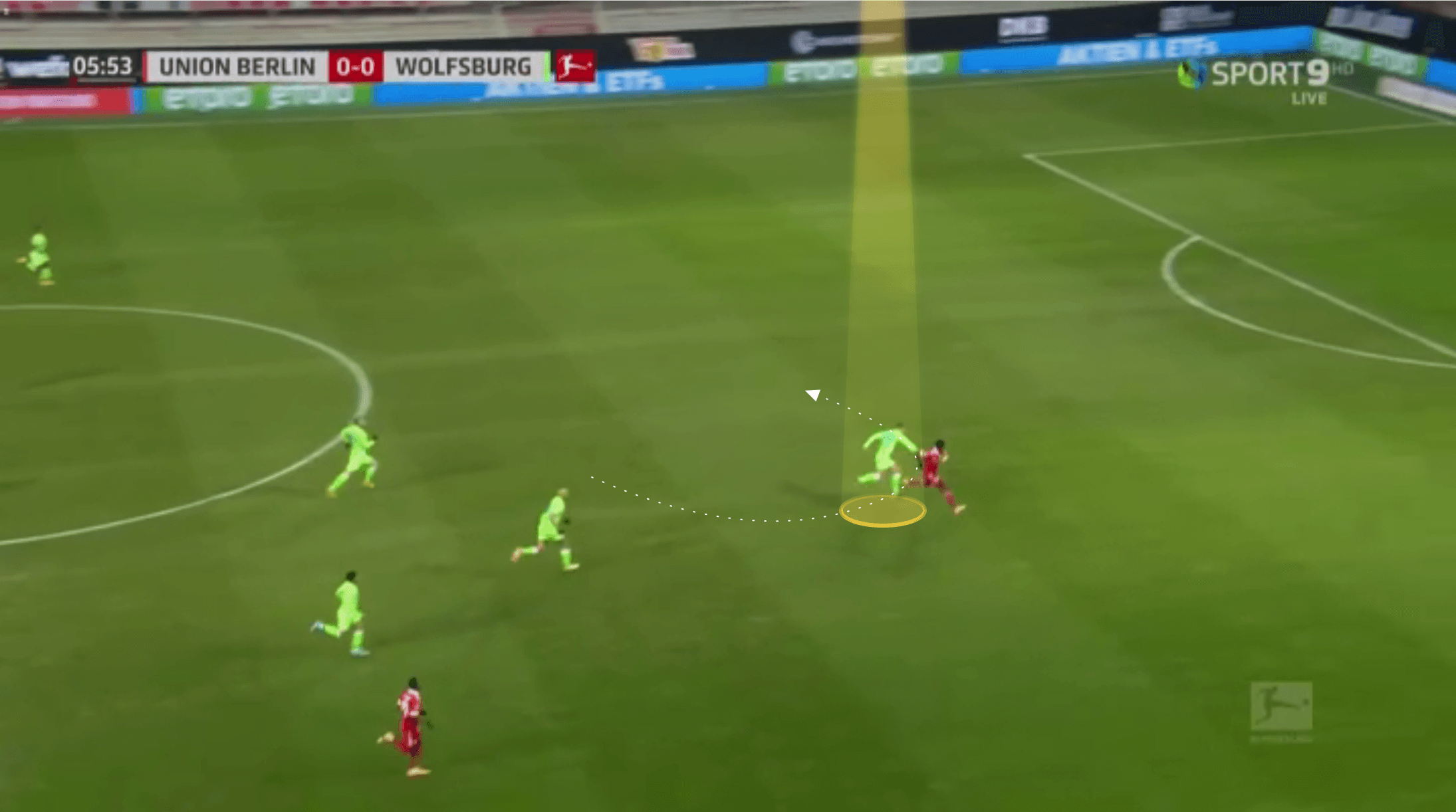 Pongračić can look to win the ball a little early at times, however, and standing at 1.93m if he remains upright when looking to make the challenge, like in the image below, it can prevent him from being able to recover amply. His timing of tackles is good for the most part but it is in these situations where he looks to win the ball immediately where he can look a touch cumbersome and awkward. 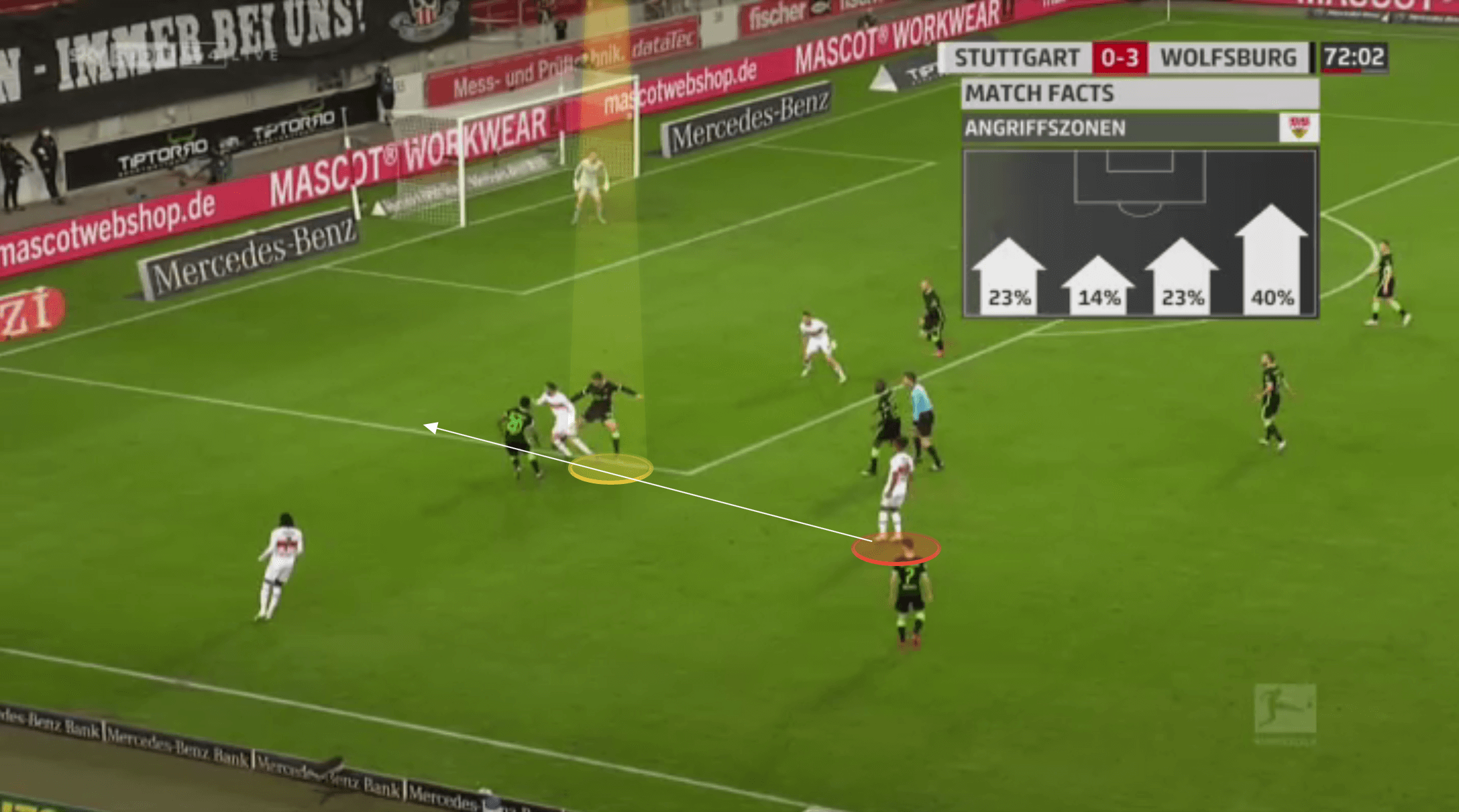 Aerially he does a terrific job of competing in crowded areas, showing good timing, strength, and a sizeable jump to regularly beat opponents to the ball. When defending inside his own area he shows excellent awareness of the positioning of the opposition team and his own, and which spaces to clear the ball into. He can head the ball away, generating good power and distance and avoid playing immediately back into the feet of an opposition player. 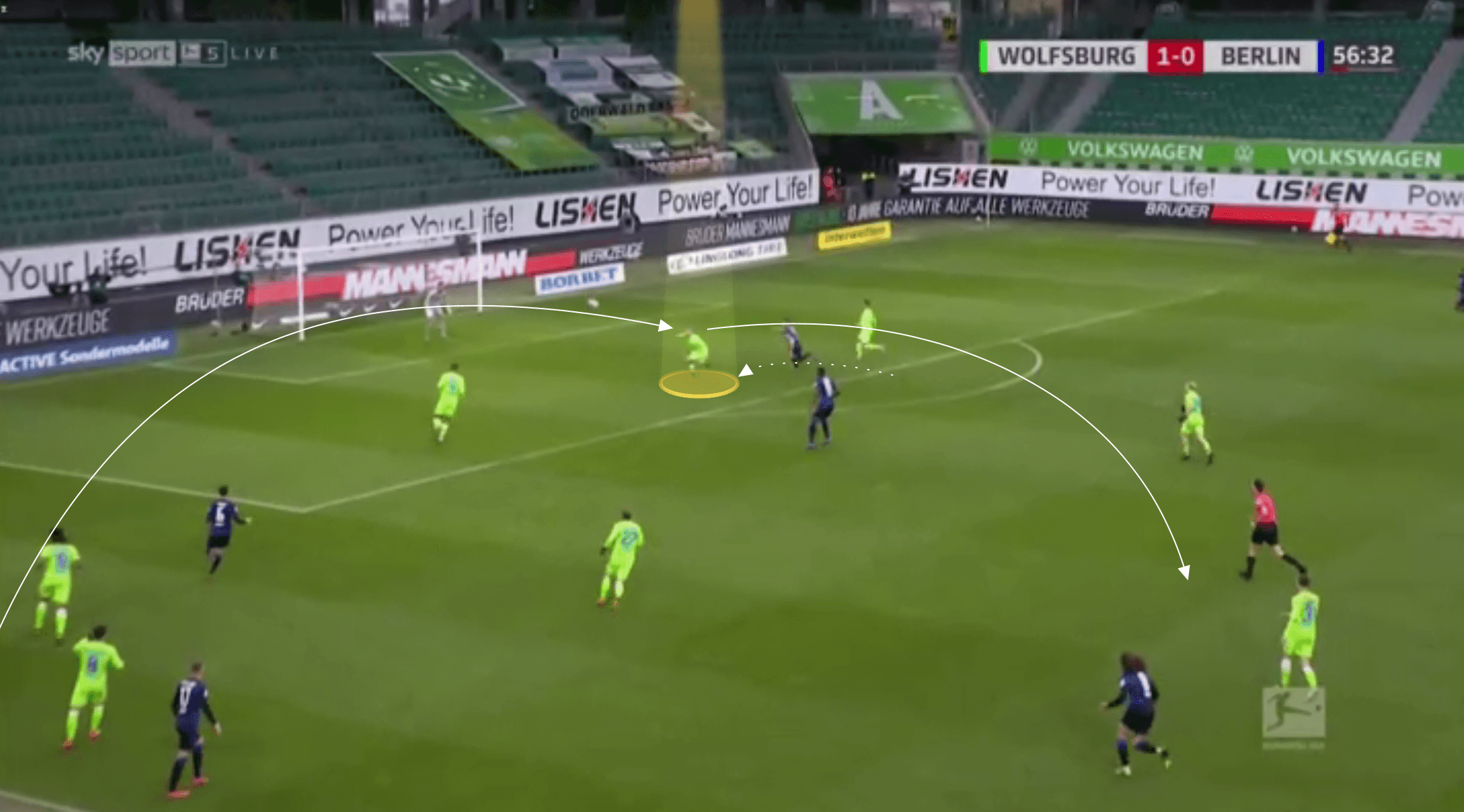 He can be too physical at times, however, and as the image below demonstrates, he can take an almost dangerous approach as he seeks to outmuscle the attacker. Getting as touch tight as he does in the image below, inside his own area, shows a lack of maturity in some moments, but at 23 years of age, you would expect him to iron out moments such as this. 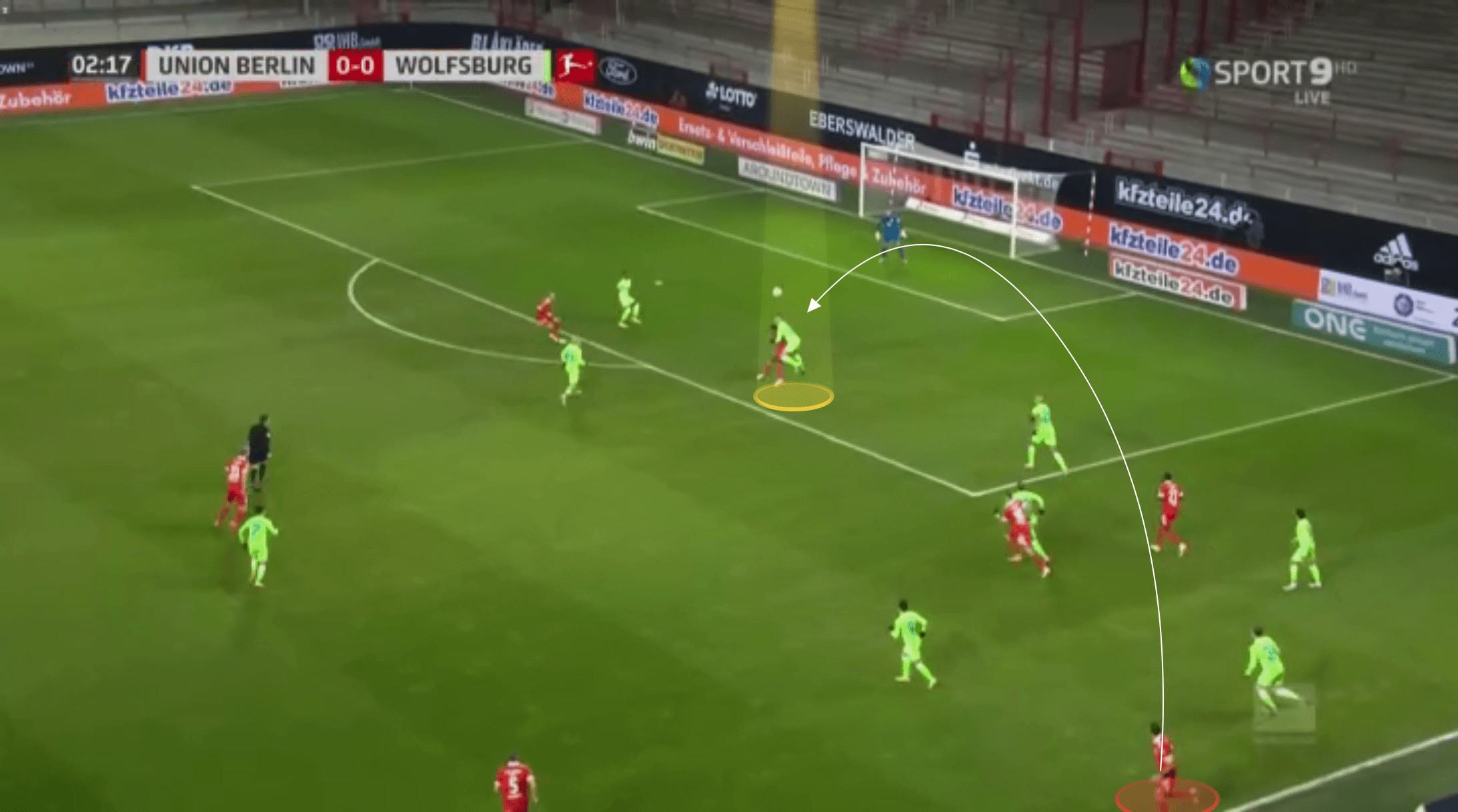 In terms of what Pongračić can do in possession, he is a calm, composed figure on the ball, who can certainly play a forward pass, but he doesn’t excel by any means as a ball progressor. 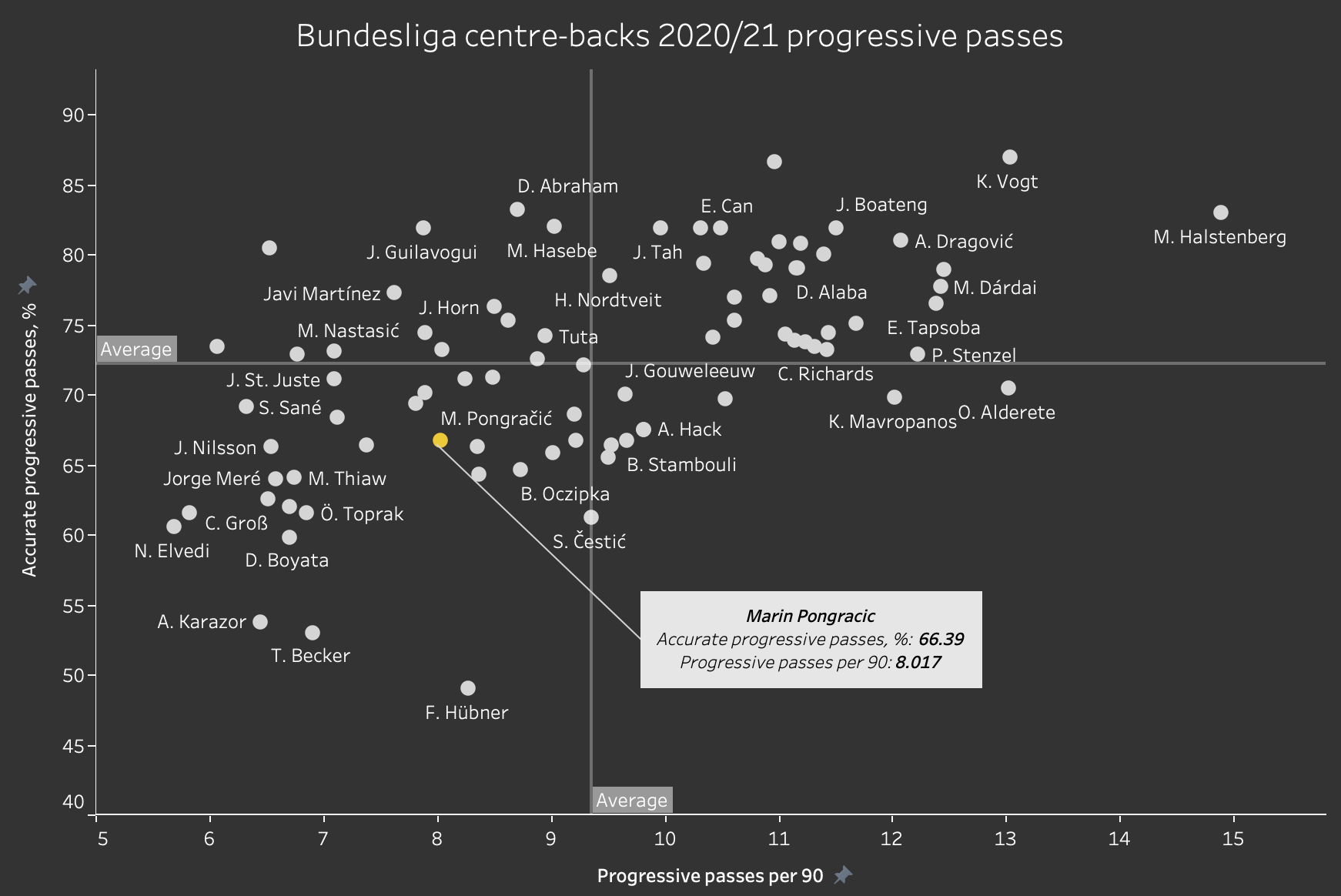 Pongračić moves the ball at a decent tempo at the back, circling the ball perfectly well, but perhaps his biggest criticism is a slightly one-dimensional approach to progressive passes. He can split a midfield with a ground pass and when in possession constantly looks for the forward pass option with an upright body position. 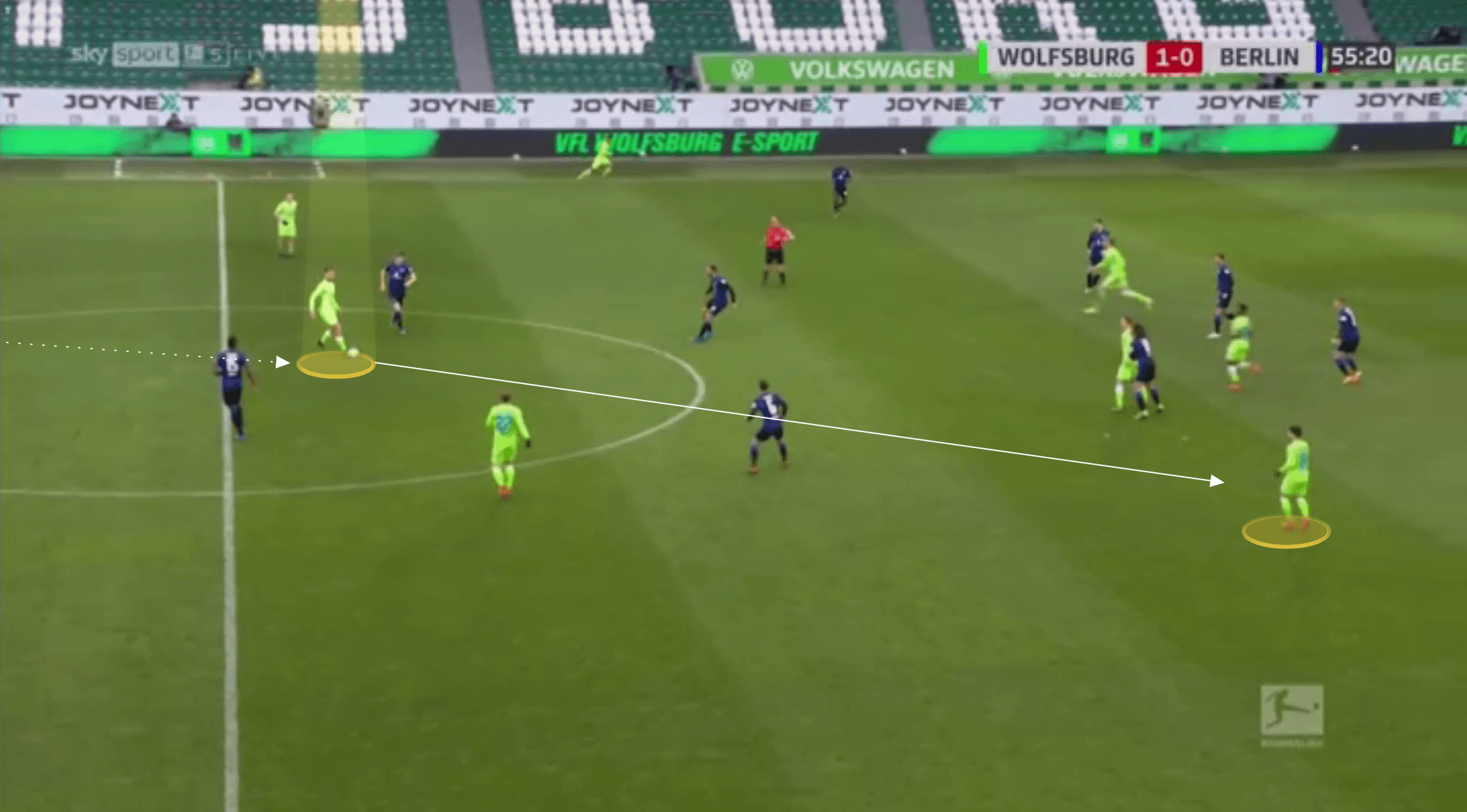 He will keep his head up as he drives forward, and may take space in front of him, even if only to draw the opposition press forward before playing a pass, rather than looking to go on any long, mazy runs. 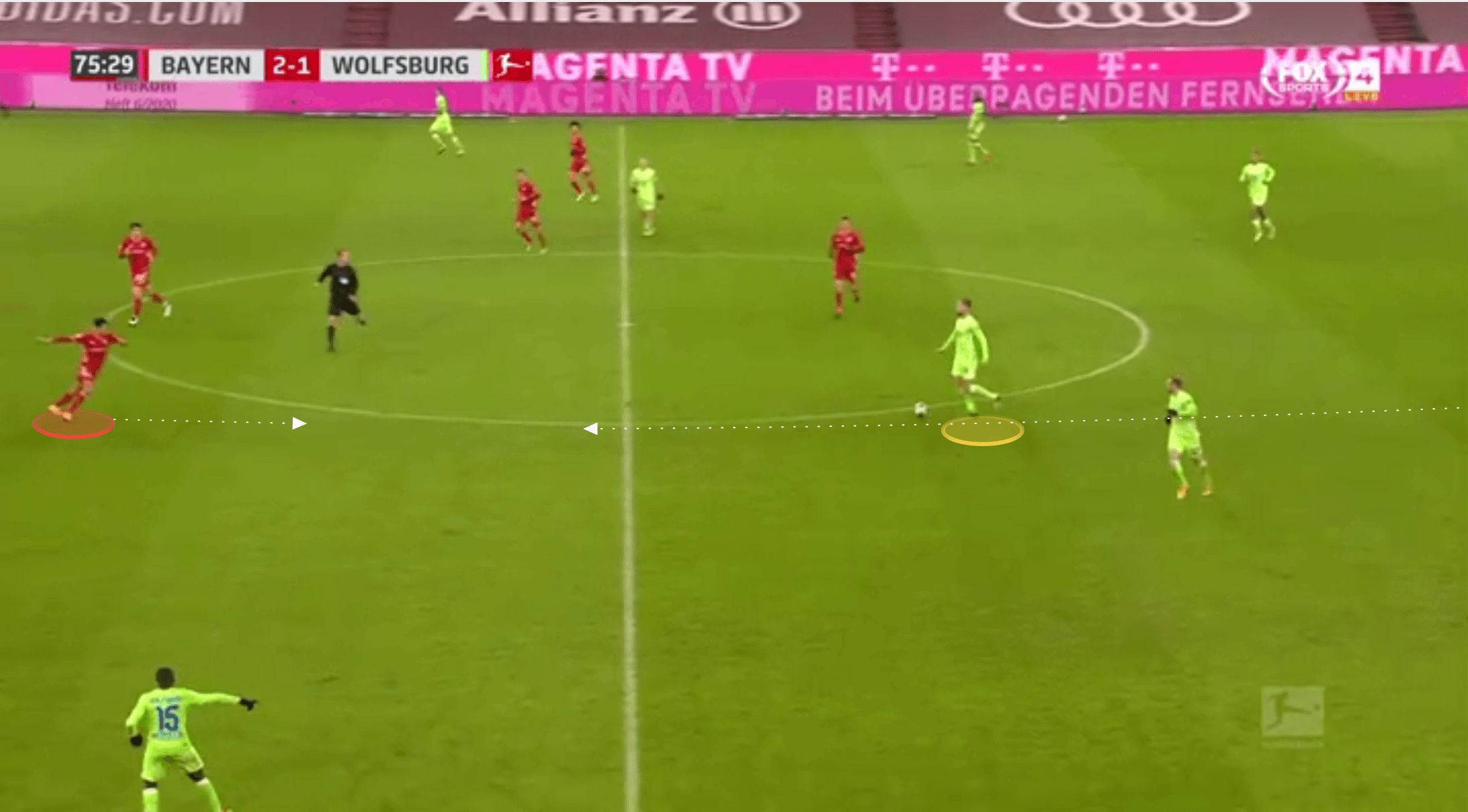 He is composed when under pressure and can still pick out a forward pass, which we can see in the image below. However, this isn’t a common occurrence for Pongračić. Whilst he shows quality in breaking lines with these firm passes played on the floor, this isn’t his favoured approach to progressing the ball. 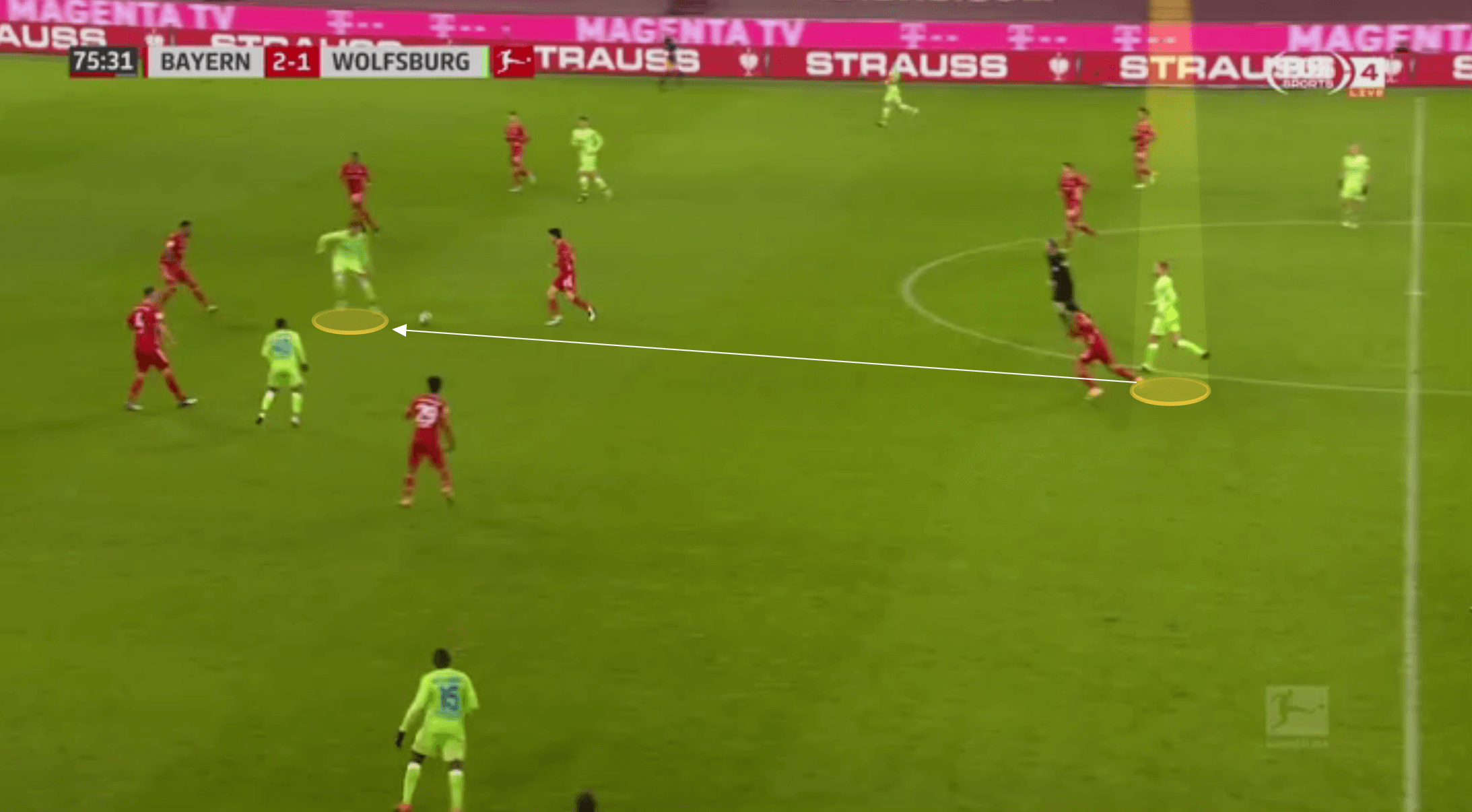 The issue potentially lies with something that Pongračić has a natural talent for which is the longer ball forward. He has an eye for a through pass, and can effortlessly play longer passes, with an excellent range.

He can simply clip the ball, with little backlift and little-to-no follow through to play a flatter pass over the top. He can hit diagonal balls, but shows an ability to play these balls in straighter lines for the forward to run onto, without it overrunning into the arms of the keeper.

He claimed an outstanding assist last season against Eintracht Frankfurt with such a pass. 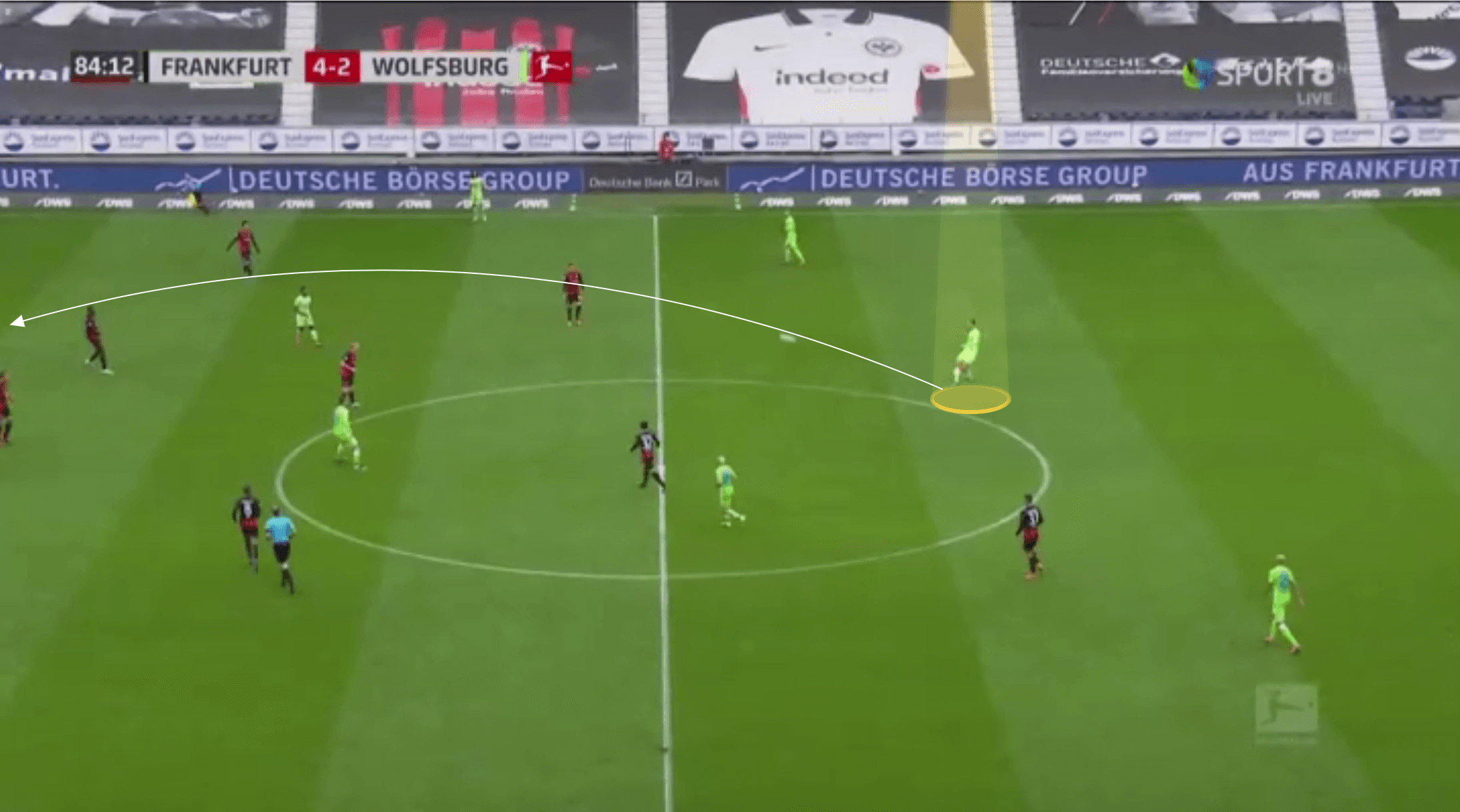 He lofts the pass quite significantly, but as the ball bounces there is enough backspin where it doesn’t get away from the forward. His ability to see this pass, let alone execute it, is outstanding. 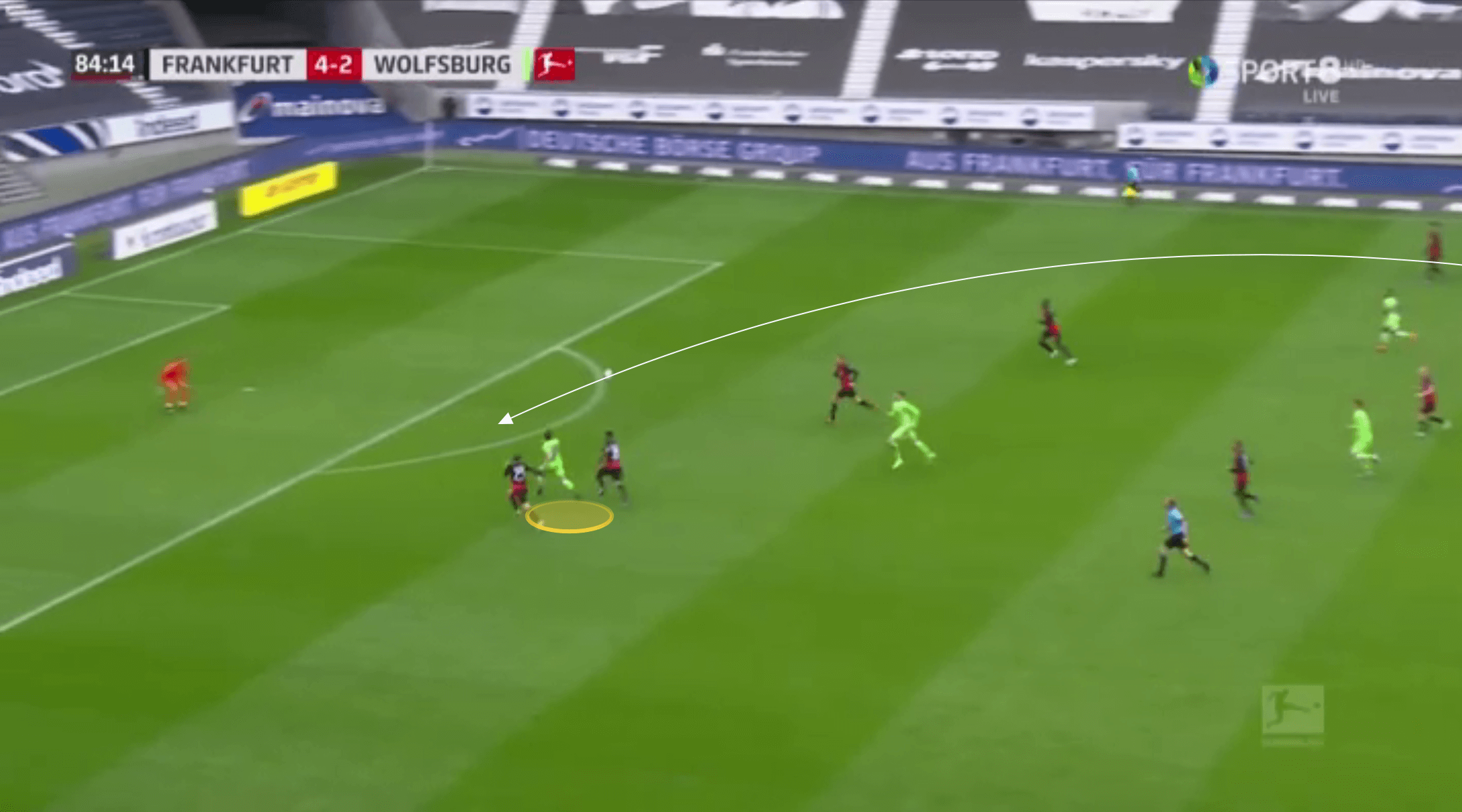 However, Pongračić can force this pass a little too often, and several of these attempts will be cut out in a game.

He uses this same technique with any kind of longer, forward pass, and as he stands the ball up so much, it can allow defenders to recover and intercept the ball too easily as he plays a diagonal, cross-field ball. 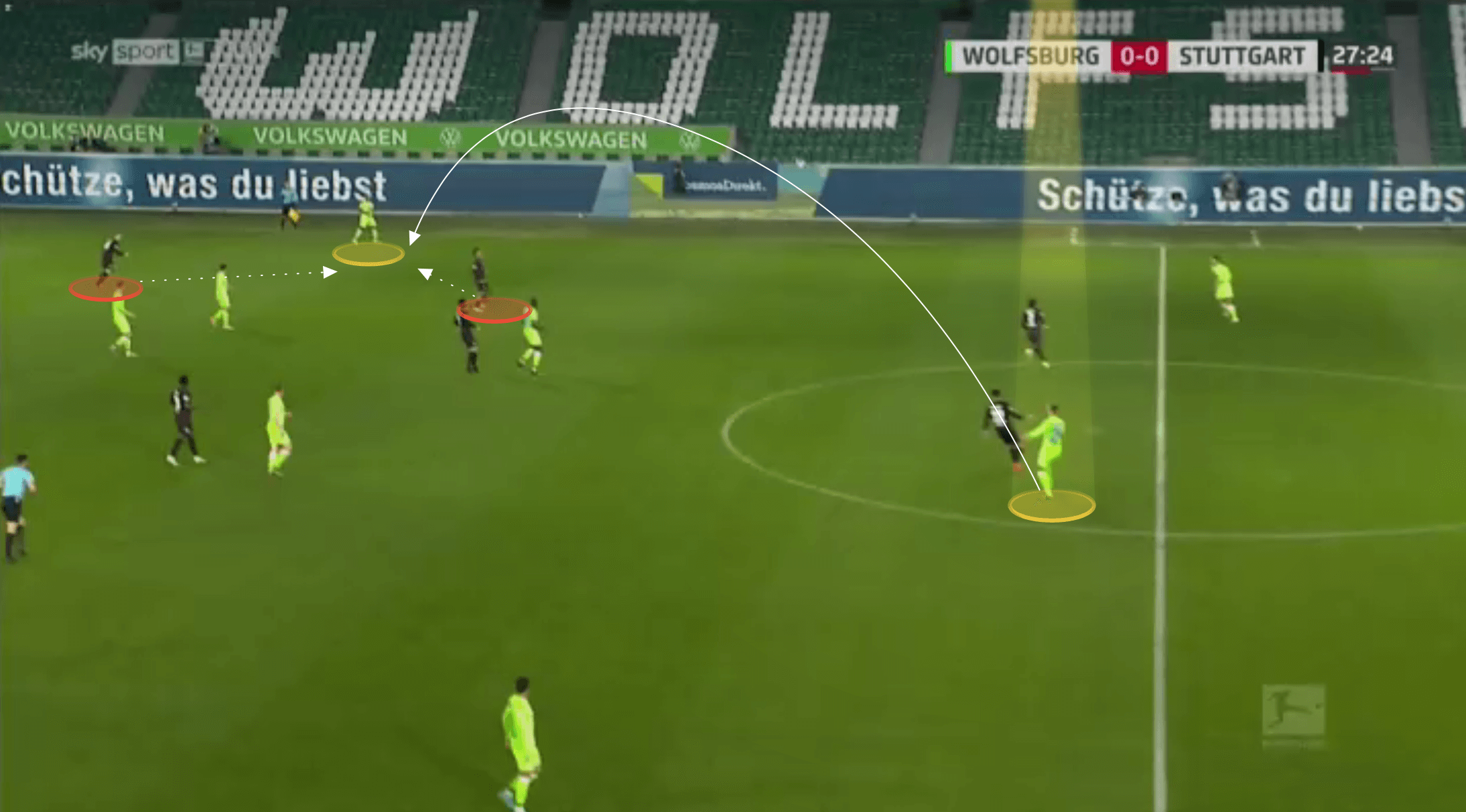 Pongračić is a smart pick up for Dortmund, initially on a season-long loan, with a rumoured option to buy in the region of 12-13 million euros. He will be able to contribute immediately given his experience in the Bundesliga already, and Dortmund will welcome his reliably strong defensive ability, whilst knowing there is a ball-player with plenty of talent and potential here that needs a little fine-tuning and development. The management team are already familiar with him as a person and a player, and therefore Pongračić represents a low-risk, inexpensive signing for Dortmund.