Portugal managed to come away with a 2-1 victory against the Republic of Ireland on Wednesday night at the Estádio Algarve in Faro.

The game was undoubtedly one of the most interesting games so far from the international fixtures in terms of the tactical battle on the pitch as well as the pure entertainment for the neutral viewer.

Ireland took the lead through a sumptuous header from John Egan after a corner was whipped into the front post by international debutant Jamie McGrath. The Boys in Green managed to hold on to their lead all the way until the 89th minute when Cristiano Ronaldo broke Irish hearts and wrote his name in the history books once more.

The Portuguese magnifico is now international football’s all-time top goalscorer with 111 goals, surpassing Ali Daei with 109. The new Manchester United signing topped it off with a 96th-minute winner in stoppage time to secure all three points for Fernando Santos’ side.

Stephen Kenny will be extremely proud of his players though who fought throughout the game and were extremely hard-working. Unfortunately for Ireland, they were beaten by quality in the end.

The manager’s tactics were brilliant throughout, nullifying Portugal’s attacking threat and hurting them in weaker areas, which will be analysed in further detail. 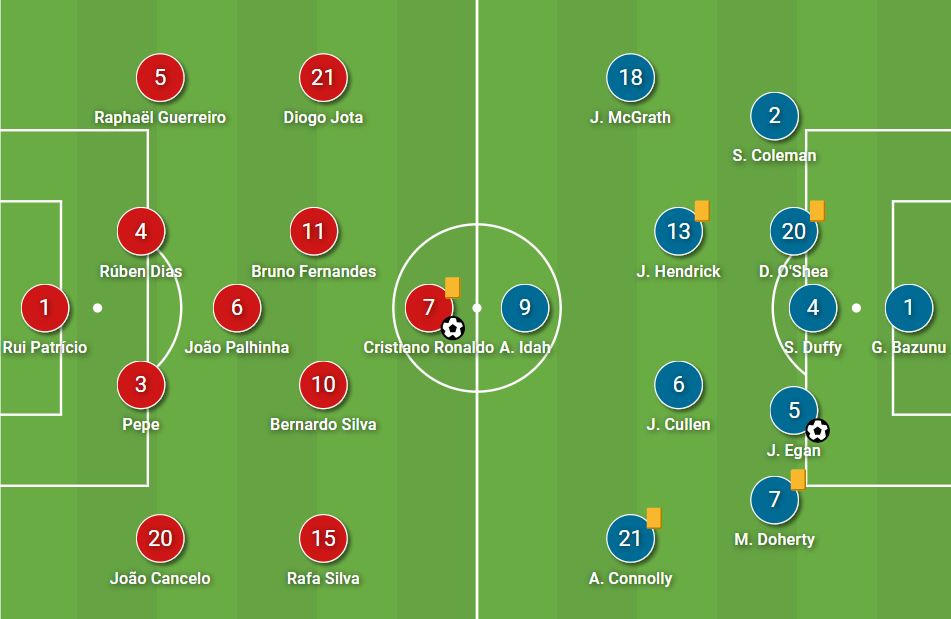 Santos deployed the 4-3-3 formation for this game which was expected considering the gulf in quality of the two sides. There were not many surprises in the side either as Rui Patricio took the number one spot in goal, with Raphaël Guerreiro, Ruben Dias, Pepe, and João Cancelo making up the backline.

Sporting Clube de Portugal’s João Palhinha was utilised as the lone ‘6’ in Portugal’s three-man midfield, supported by both Bruno Fernandes and Bernardo Silva as the two ‘8s’.

Cristiano Ronaldo, of course, played as the lone centre-forward and was flanked by Rafa Silva on the left and Liverpool’s Diogo Jota on the left.

For Ireland, Stephen Kenny switched to a 5-4-1 which looked more like a narrow 3-4-2-1 in possession. The emphasis on Ireland’s tactical set-up was clearly to sit back and deny Portugal space before hitting them in behind their exposed backline, particularly down the flanks.

19-year-old Manchester City loanee Gavin Bazunu started in goal and had a wonderful game, denying Ronaldo from the penalty spot early on.

The back five comprised of Dara O’Shea, Shane Duffy, and Egan as the three centre-backs with Seamus Coleman and Matt Doherty shoring up the wide areas. O’Shea was forced off in the 36th minute through an unfortunate injury and was replaced by another debutant, Andrew Omobamidele, at right centre-back.

The double-pivot of Jeff Hendrick and Josh Cullen worked tirelessly throughout the match alongside Aaron Connolly and McGrath who dropped back to create a four-man midfield line. Adam Idah played as the lone striker.

Portugal may be labelled as somewhat of a conservative side due to Santos’ tactics in games against tougher opposition. However, the Euro 2016 champions played exactly how one would expect, dominating possession with 71.77 percent to Ireland’s 29.23 percent.

Kenny’s intentions from the get-go were to ensure that Ireland were difficult to break down in each defensive phase of the game. Ireland pressed high but knew when to sit back and defend in deeper areas. All of this was done cohesively, and each player knew their role in the team.

When Portugal had the ball in the build-up phase, Ireland pressed man-to-man in what resembled a 3-4-3 formation. The key objective in their press was to block the passing lanes into Portugal’s three midfielders and force the man in possession wide. 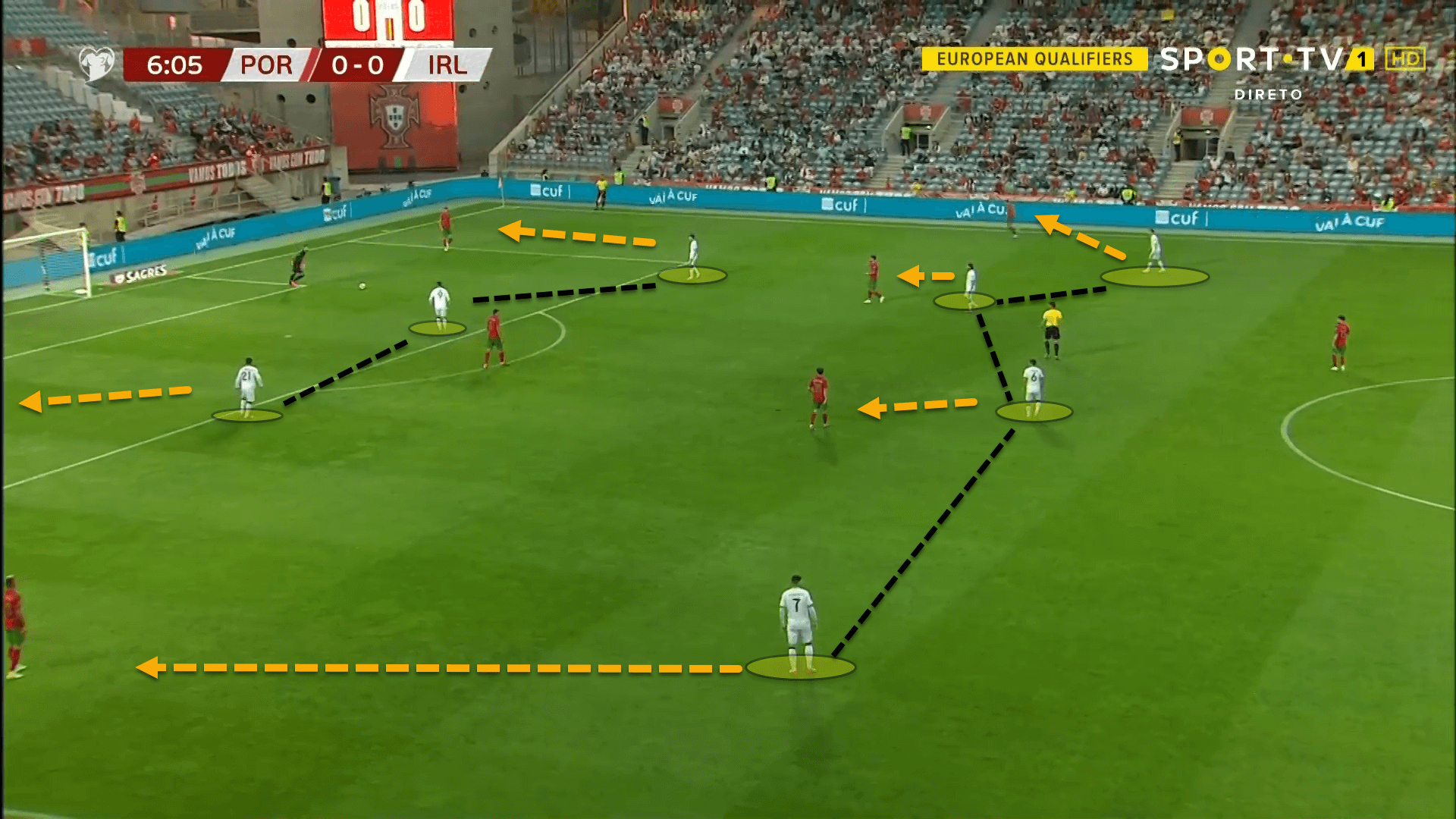 As expected, Portugal used a 4-3-3 structure in this phase and Ireland match them with a man-marking scheme. The two wingers came very narrow to press the Portuguese centre-backs while Idah was tasked with pressing the goalkeeper, forcing him to play wide, and applying a cover shadow to Palhinha, preventing any access to the Sporting man.

In the second defensive line, Cullen and Hendrick picked up Fernandes and Silva who tended to drop quite deep in order to create passing angles to aid with progression in this phase. Meanwhile, the two wingbacks pressed Portugal’s fullbacks high up the pitch.

The press worked for the most part and made it very difficult for Portugal to play their natural game, having to create combination play in the wide areas to break through the press or else play long to the forwards who were in a 3v3 situation with Ireland’s centre-backs.

Ireland were happy to allow Santos’ side to play long as the centre-backs chosen by Kenny are all comfortable in the air. 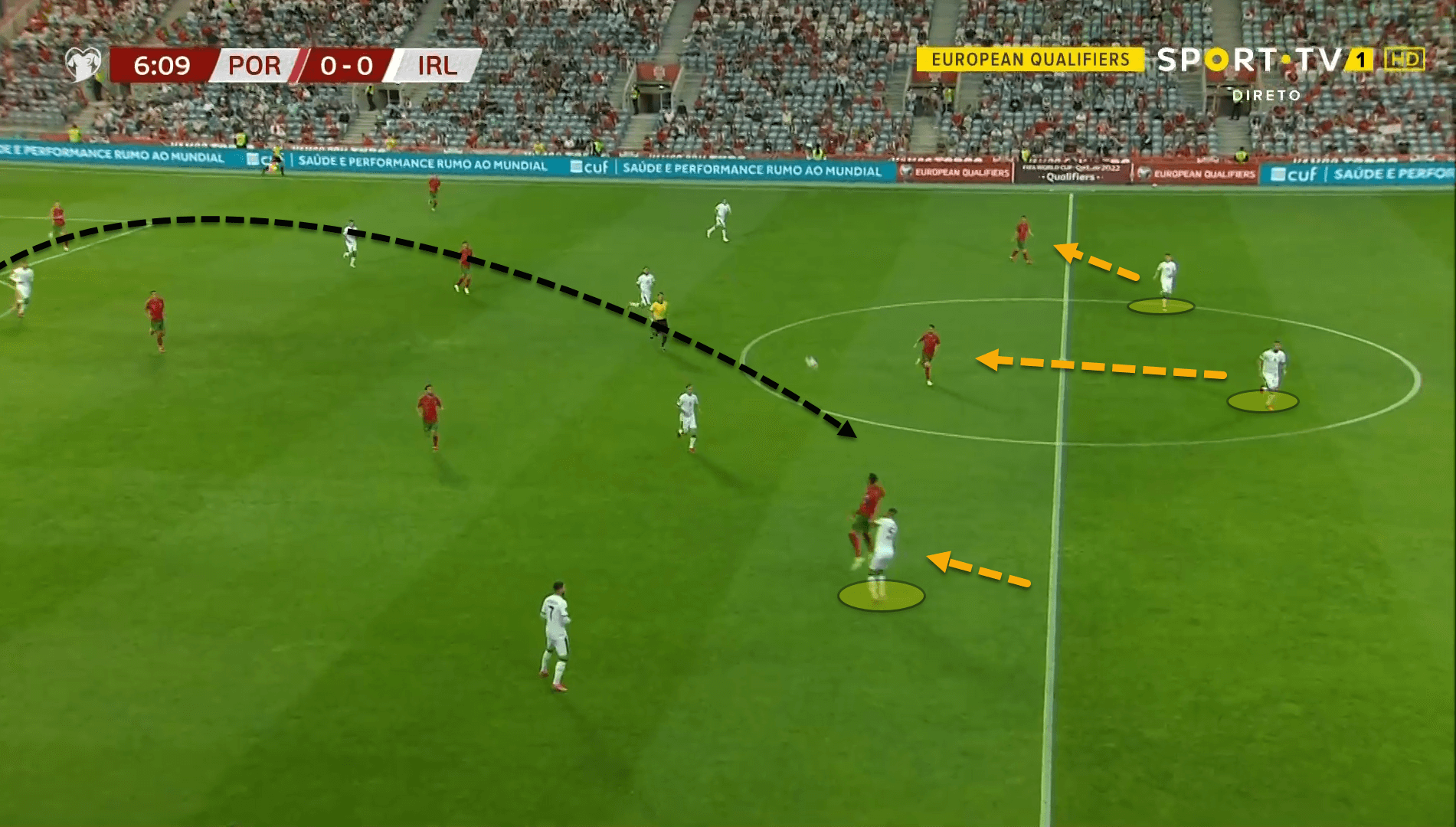 When Portugal did break through the press and had the ball in a structured attack higher up the pitch, Ireland dropped off into a very compact 5-2-3 mid-level block.

Again, the objective here was identical to their aim in the high block phase – deny access to the three central midfielders and force Portugal wide into less harmful areas of the pitch.

The wingers tucked in very close to Idah upfront to ensure that the first line of pressure was narrow, making it difficult for Portugal to find a line-splitting pass to Palhinha, which was ultimately Portugal’s aim in this phase of the game. 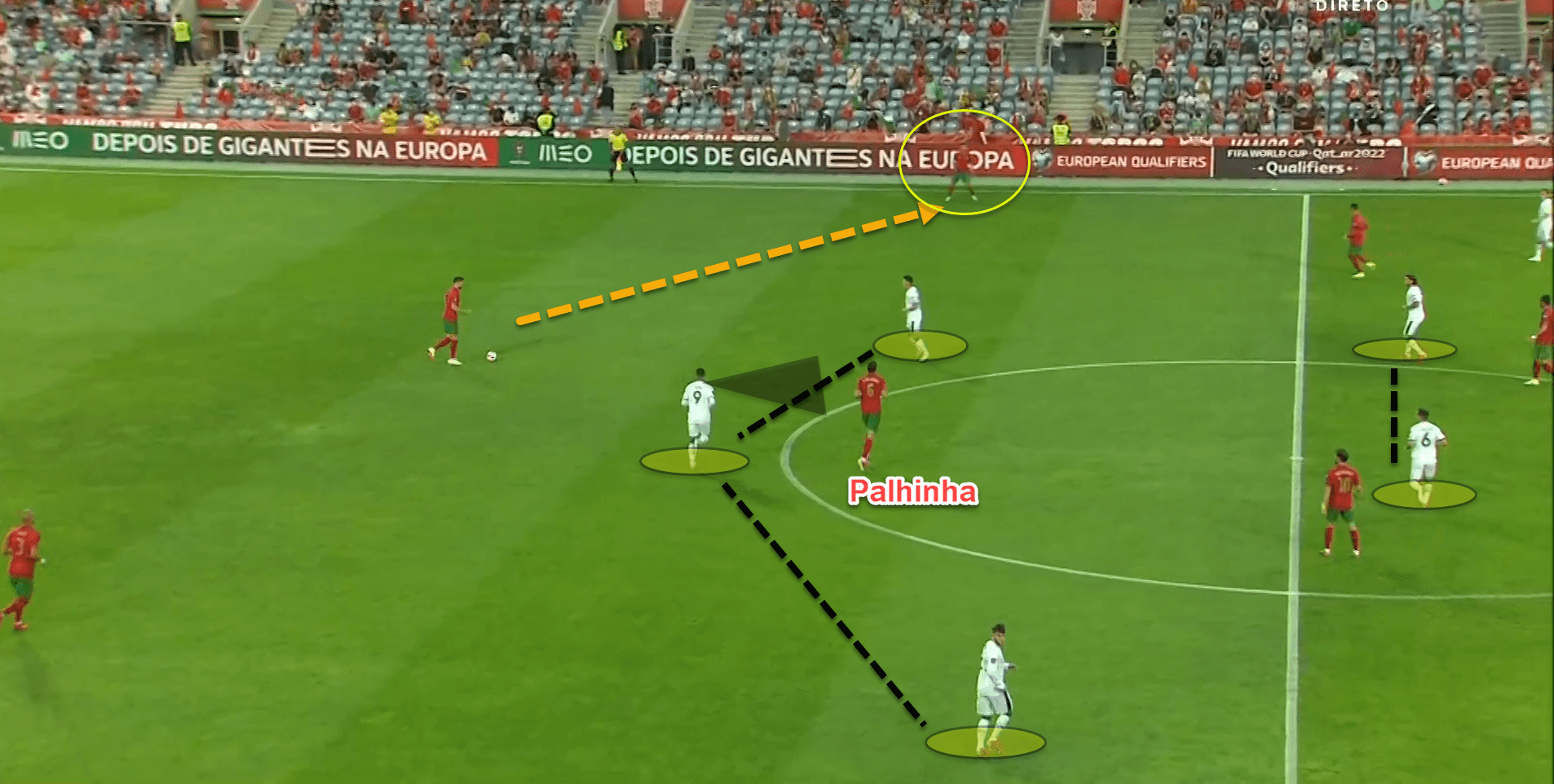 Here, in this example, the front three are very narrow and have made the area between themselves and the double-pivot quite compact. Dias has an option to play out to Guerreiro on the left flank and takes the opportunity instead of playing through Ireland’s first line of pressure into a congested area and risk losing the ball.

However, when the ball did end up with Portugal’s fullbacks in this phase of the game, the ball-near winger would push across to close him down. When this happened, the same winger would apply a cover shadow to the ball-near Portuguese central midfielder while the nearest pivot player would shift across to mark the same midfielder. 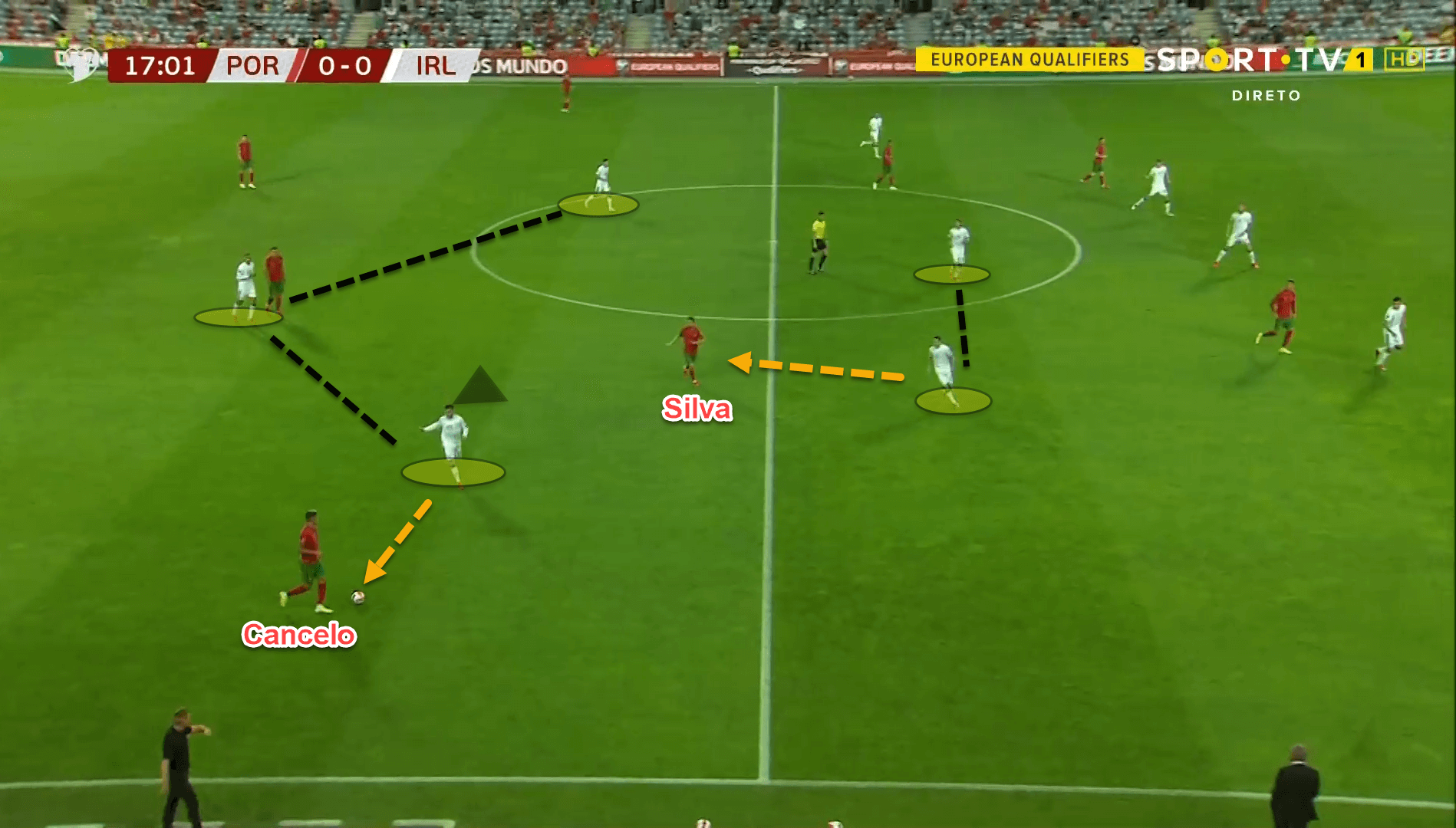 Here, Connolly has pushed across to put pressure on Cancelo. He applied a cover shadow to Silva while Cullen also took responsibility to mark the Man City man simultaneously.

When done in cohesion, it prevented Portugal from playing through the central areas by cutting off the passing options and so Santos’ men were constantly forced to play down the line or else recycle possession and try again over the opposite side of the pitch.

Sometimes the recycling of possession worked for Portugal particularly if Bernardo Silva dropped extremely deep to receive the ball from the defenders. 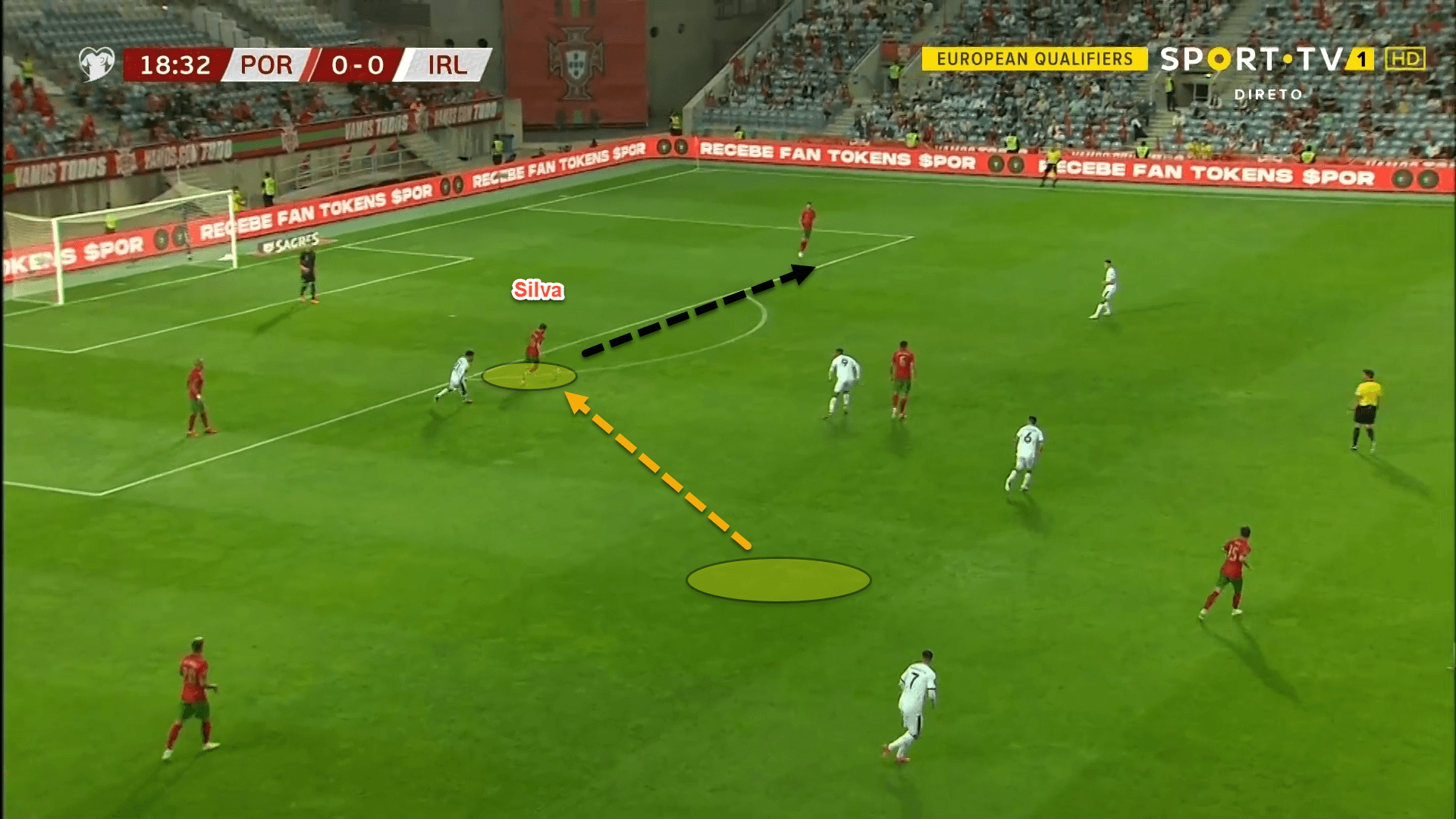 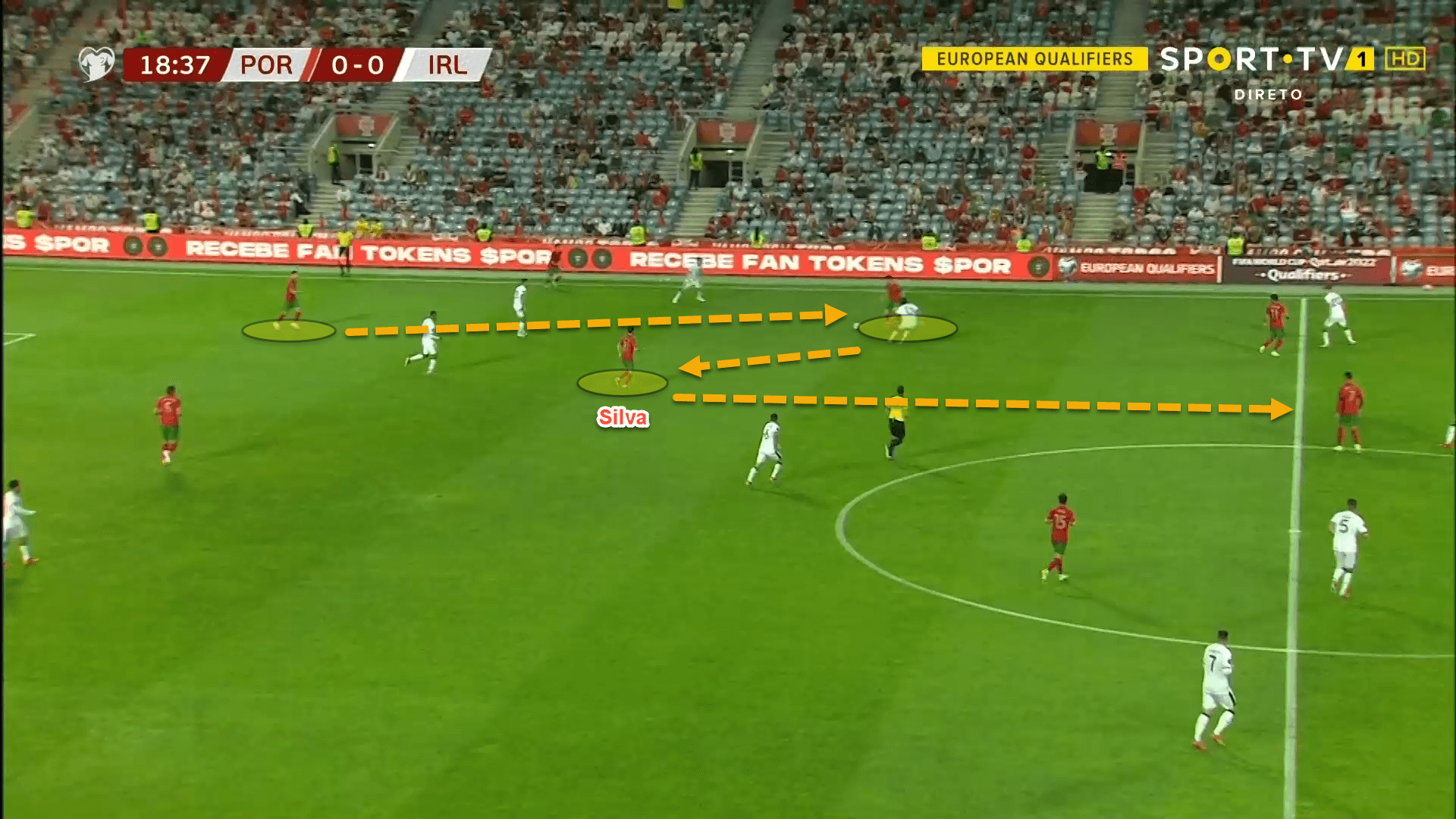 In this example, which happened numerous times throughout the match, particularly in the first half, Silva has dropped as the deepest midfielder to aid ball progression and his movement has caused Ireland’s block to break down.

When Portugal progressed into deeper areas of Ireland’s half, the Irish players would drop back into a 5-4-1 compact low block, denying Portugal any space at all between the lines and in behind. 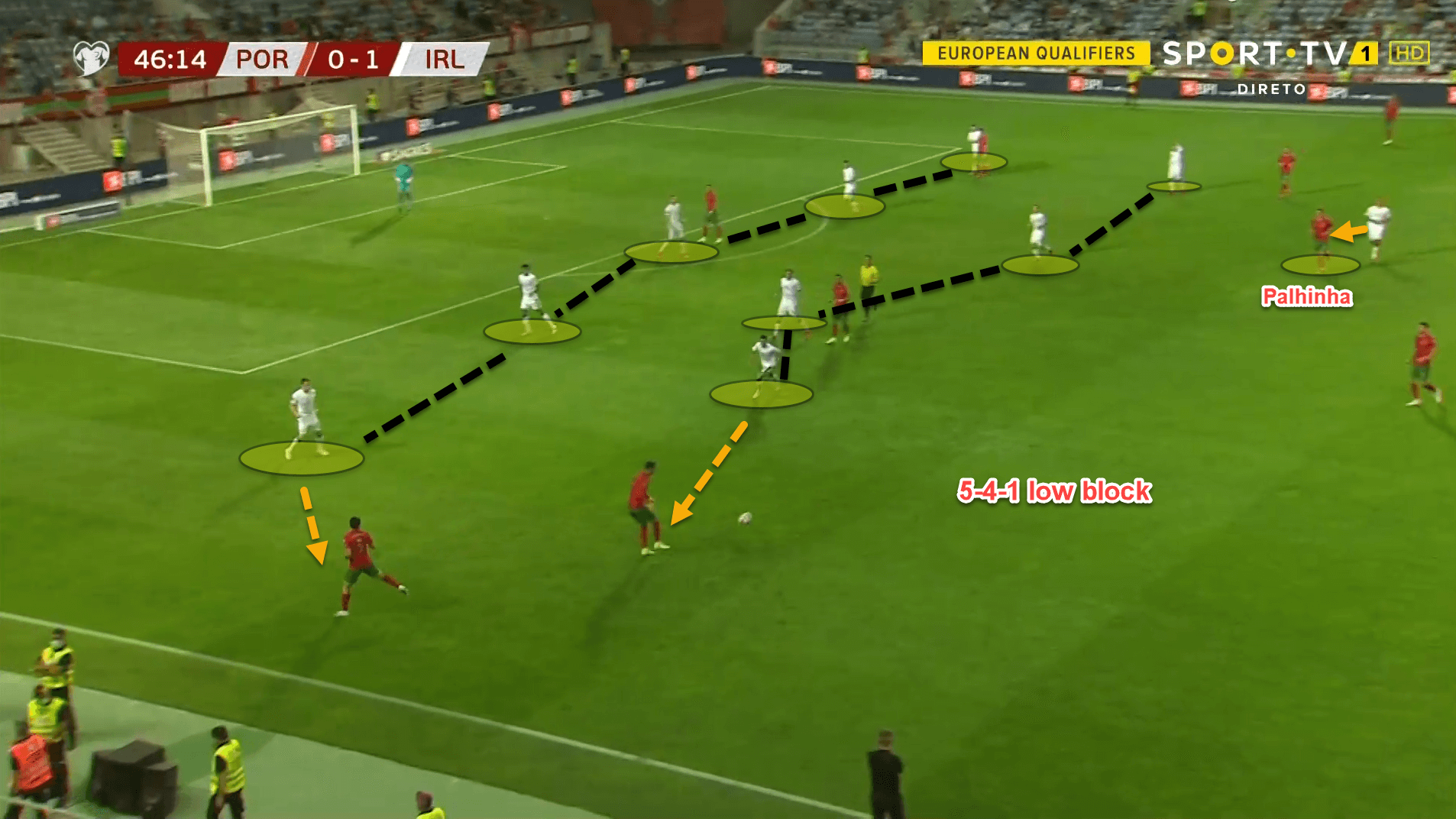 In this low defensive block, the connections between each player were perfect and it worked in complete unison, making it so successful. Idah was tasked with dropping extremely deep in the low block phase too in order to mark Palhinha which made it difficult for possession to be recycled by Portugal.

As stated already though, for the most part, Ireland’s 5-2-3/5-4-1 shape was very well held and rarely broke down. Portugal were constantly forced to play into the flanks as there was very little space for them to play players in between the lines.

From 54 positional attacks, 41 came from the flanks as opposed to just 13 in the central areas. Clearly, Kenny’s game plan was working. 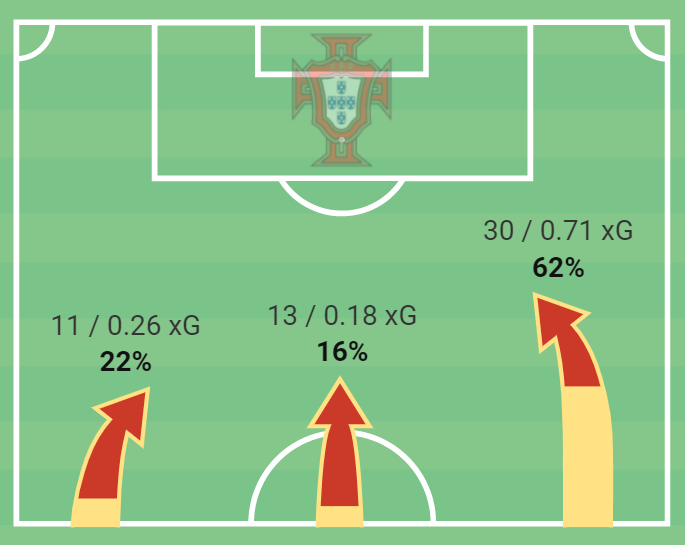 Santos instructed his men to create overloads down the flanks in order to try and break through Ireland’s resilient low block. Sometimes Ronaldo would drop out to the wide areas to create this overload as well as Palhinha.

The objective was to put crosses into the box from the final third, and when Portugal got into good goalscoring positions, they would pile the box with bodies to try and make it very difficult for the Irish centre-backs to deal with. 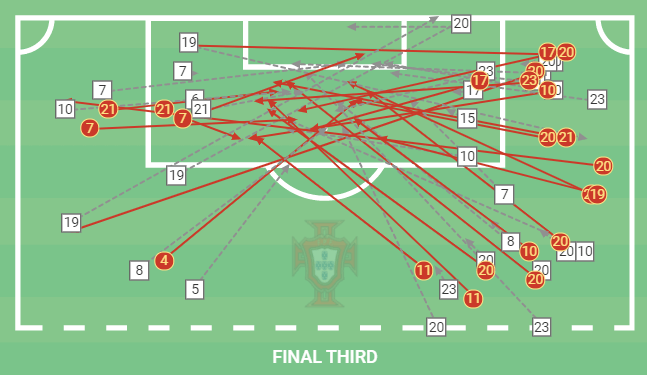 Against the Republic of Ireland, Portugal put 52 crosses into the box with 22 being accurate, a 42.31 percent success rate. The data visualisation above has plotted every time Portugal crossed the ball on Wednesday. As is visibly noticeable, Bernardo Silva, Rafa Silva, and Cancelo were the main crossers for the Portuguese.

In the end, crossing was what outdid Ireland late on in the game when the failure to stop two crosses down this side from Joao Mario and Goncalo Guedes led to two wonderful headed goals past Bazunu in the Irish net. 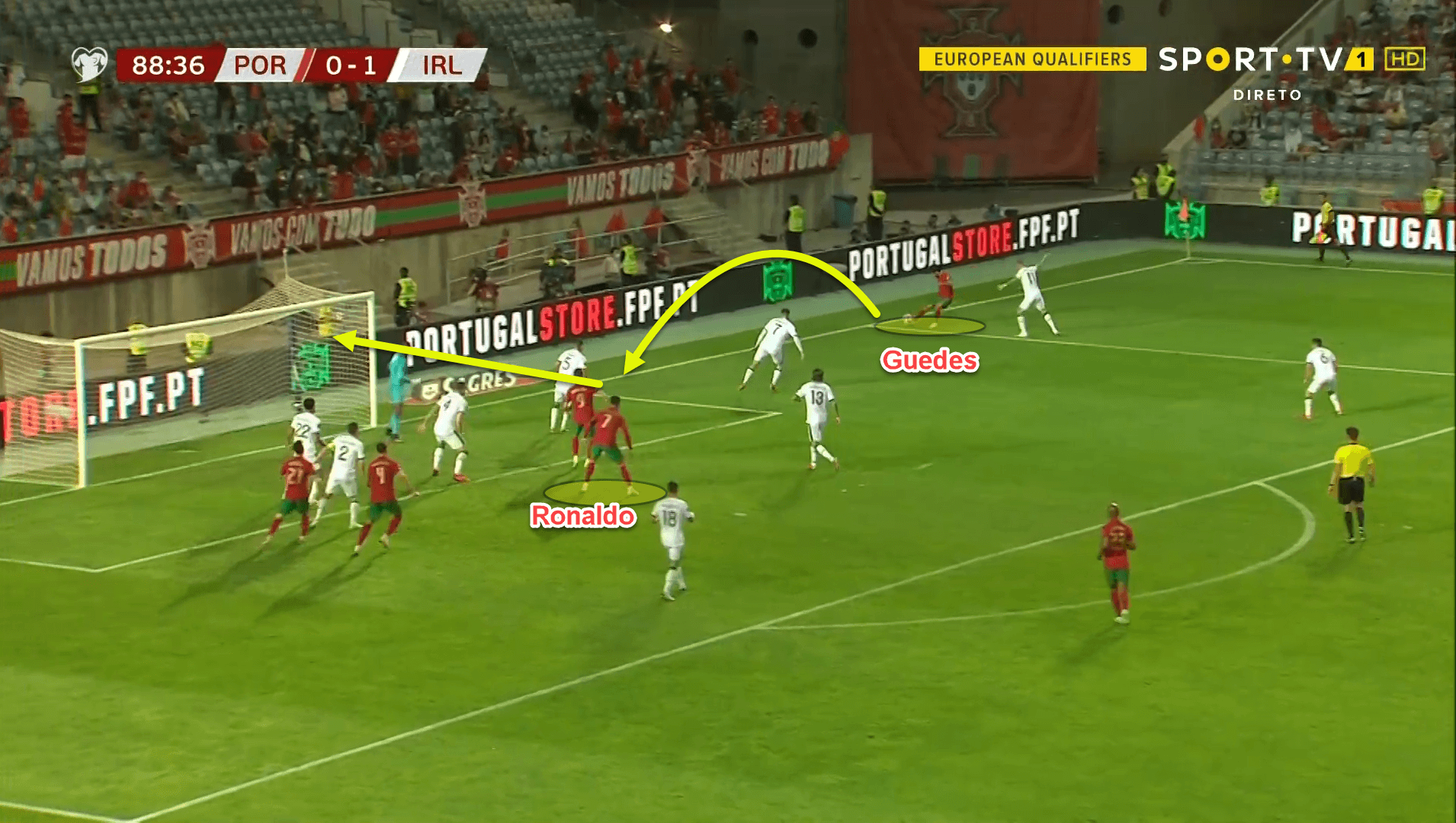 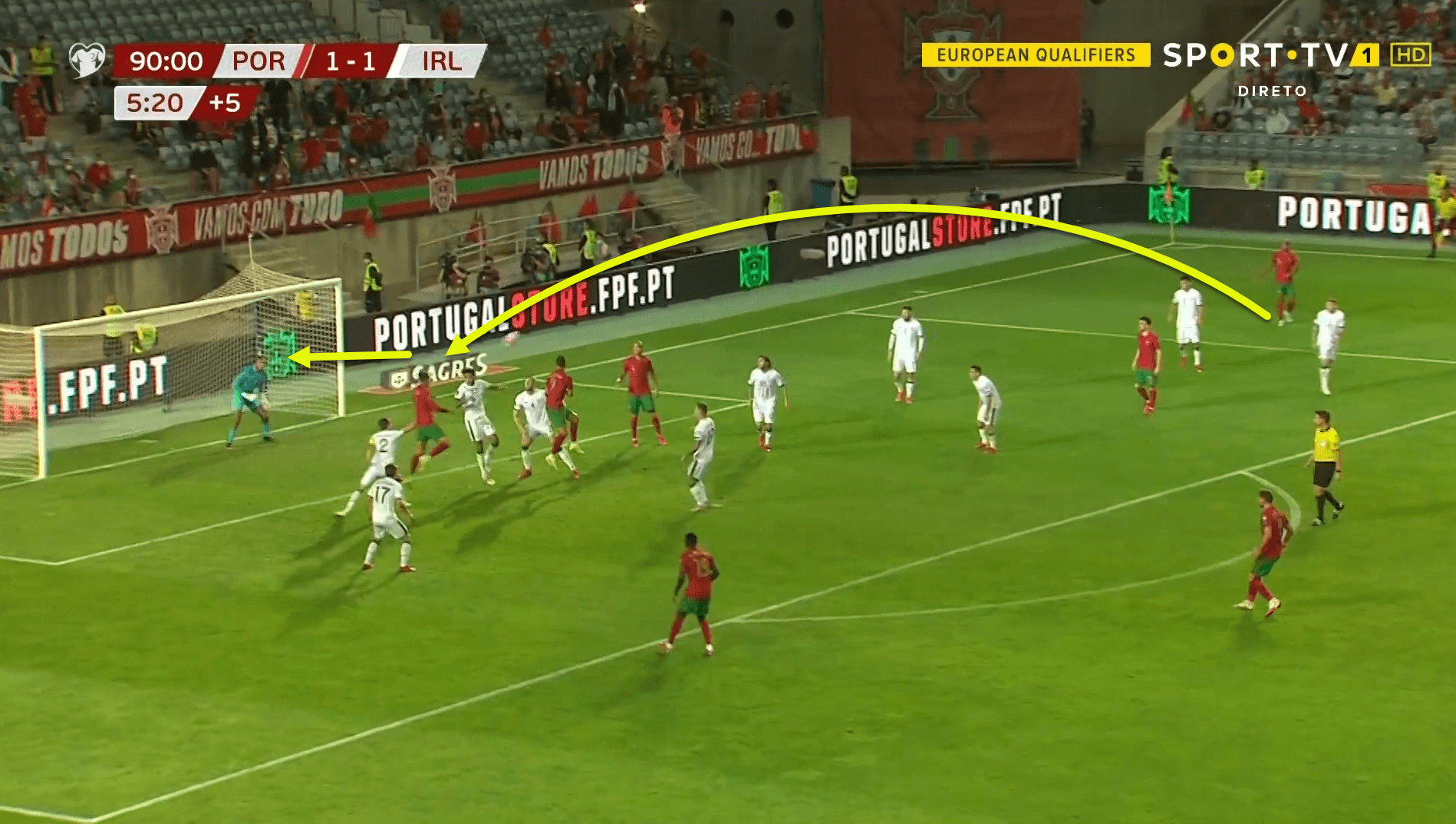 Struggling to cope with transitions

Ireland were excellent out of possession but looked extremely dangerous whilst they had the ball too despite having just 29.23 percent of the ball throughout the game.

Kenny knew that Portugal pile a lot of bodies forward in their attacking phases, including the fullbacks, and so the Ireland players were instructed to target the areas down the sides of the centre-backs when counterattacking.

This worked on numerous occasions and Dias and Pepe were struggling to cope with the constant threat in these wide areas from Irish counterattacks. In fact, the corner that Ireland scored from was gifted after a counterattack out on the left. 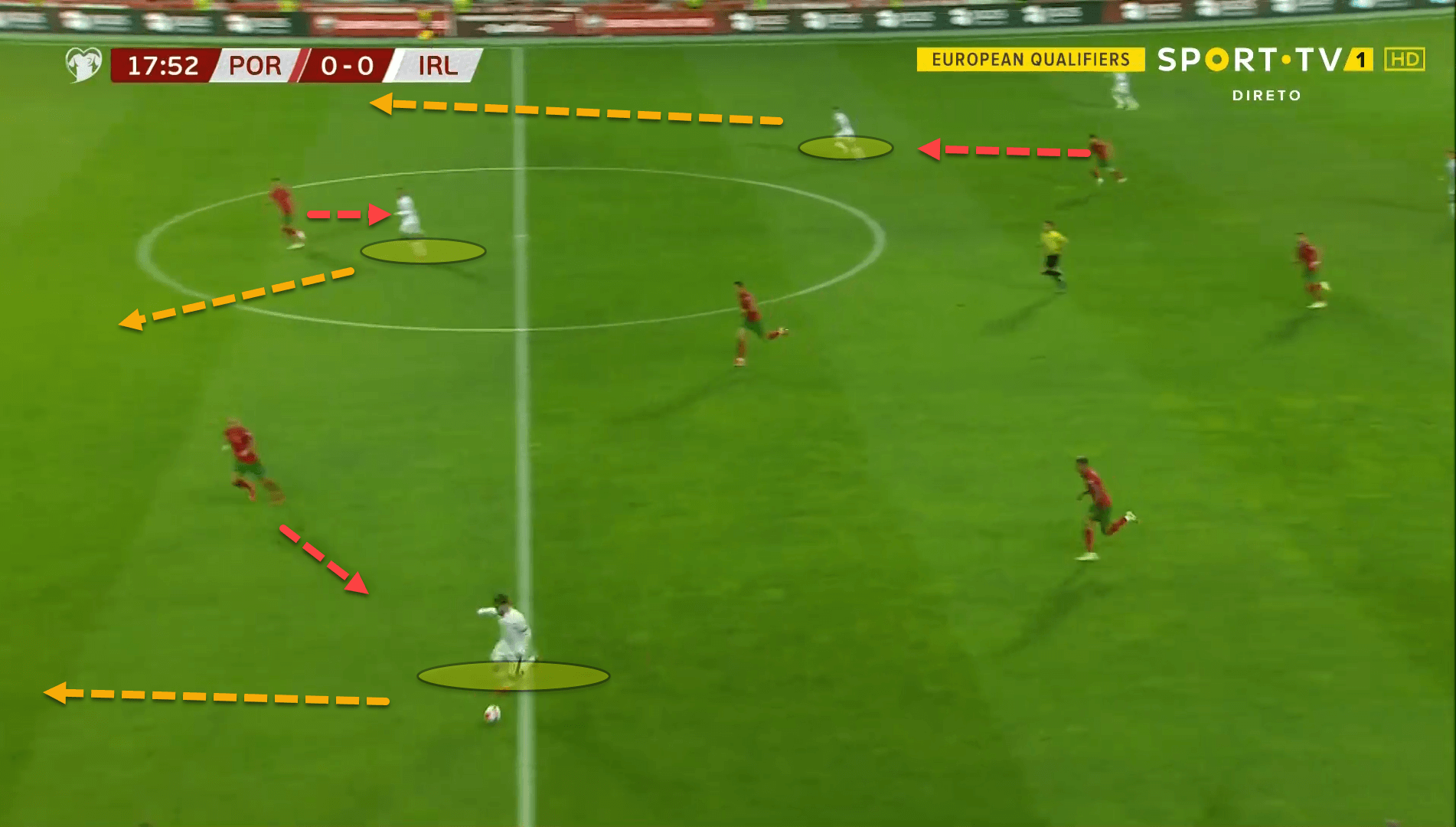 Playing Idah was an intelligent ploy by Kenny. The Norwich City striker used his body incredibly well and allowed Ireland to go long to him in order to bypass any Portuguese counterpressing which made the transitioning quicker. The 20-year-old had a phenomenal game up front for the Boys in Green. 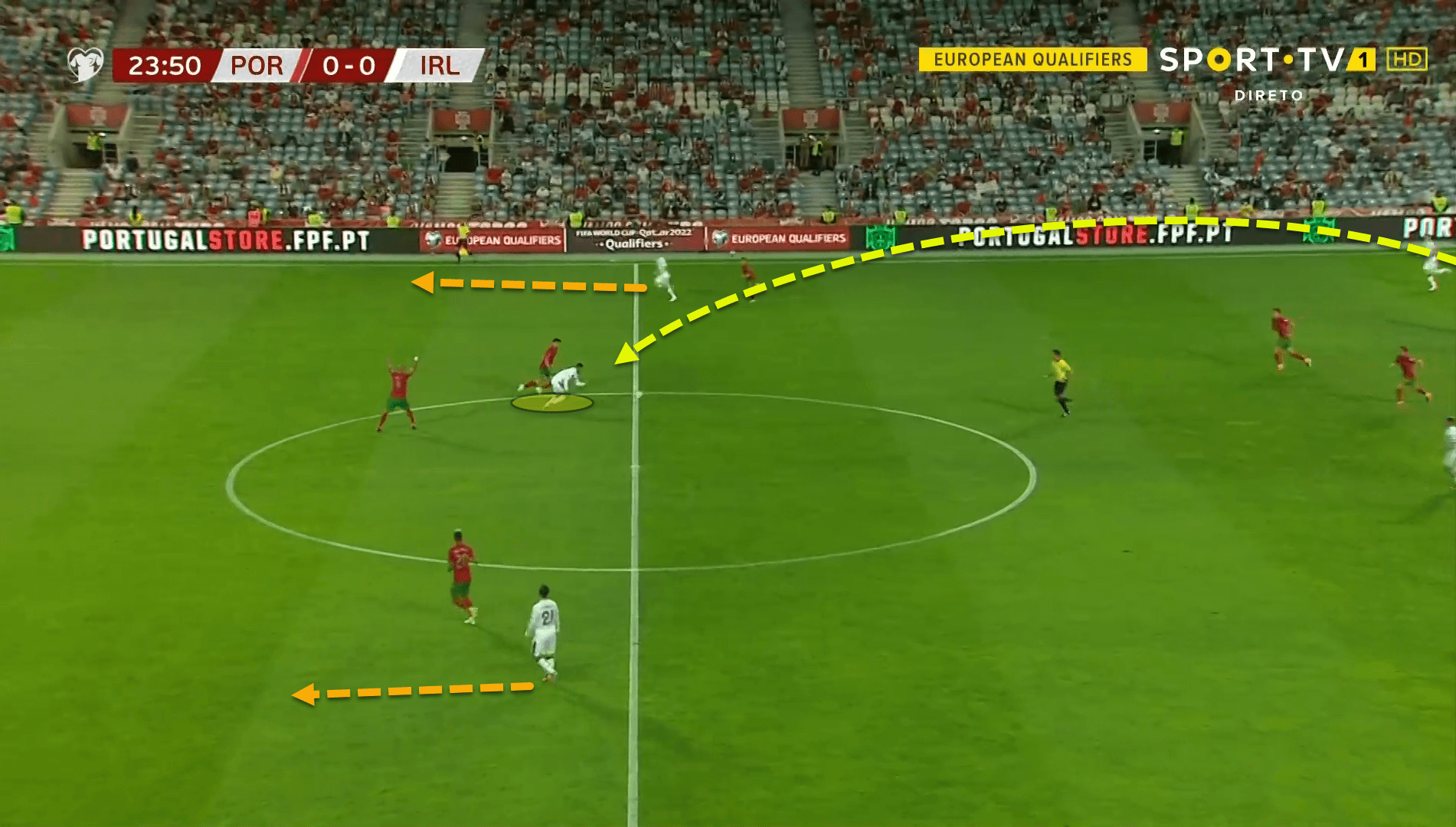 For the most part though, particularly in the first half, Portugal’s setup in possession made is extremely difficult for them to counterpress when they lost the ball high up the pitch.

In more technical terms, this is called having a poor rest defence, which makes the opposition’s job much easier in transition. 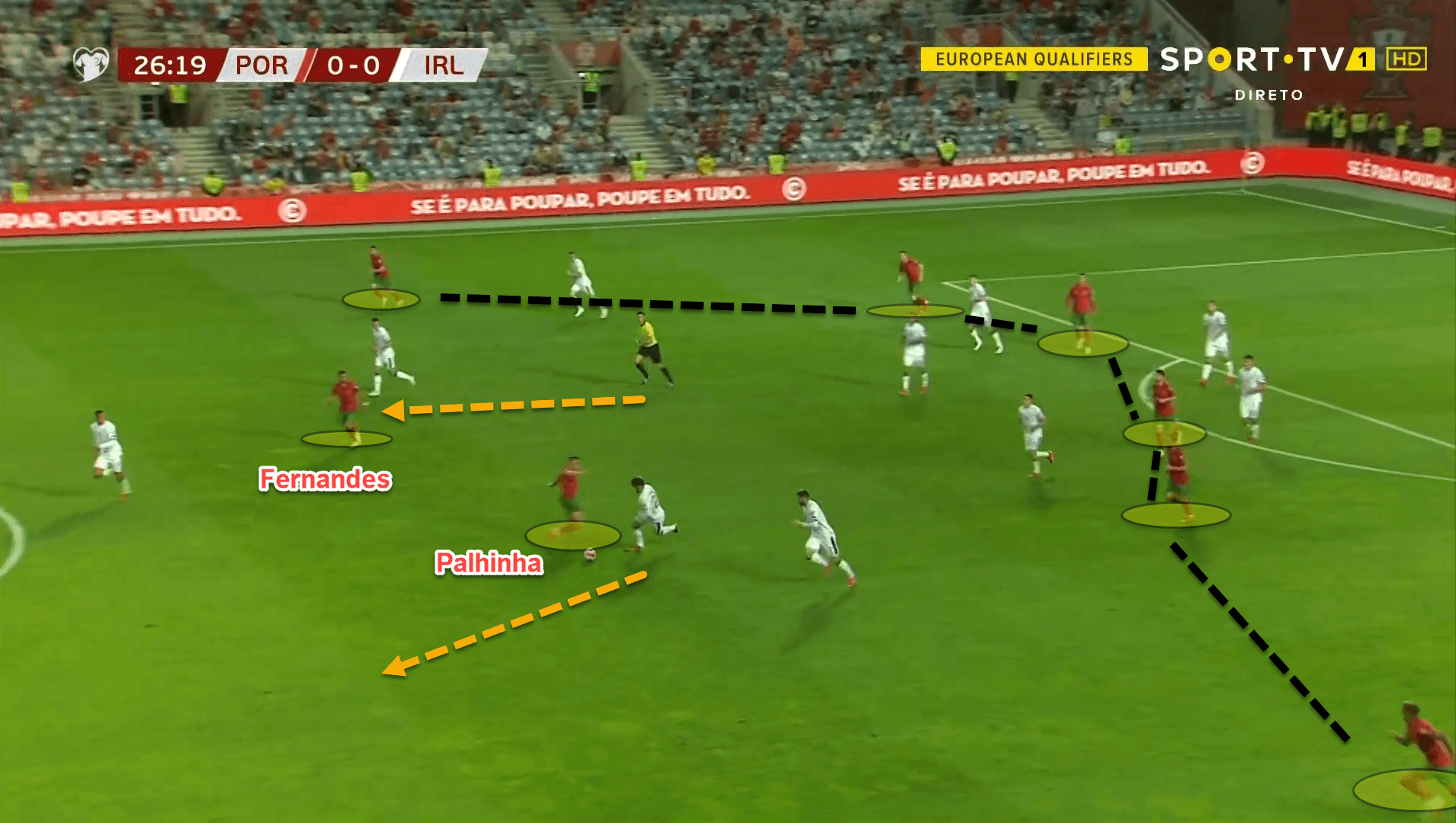 For instance, in this attack, Portugal almost had a front line of six players with Fernandes sitting just behind them. Essentially, Portugal had seven players in the final third against Ireland’s low block.

The only player stopping the Irish players from having a free run at the two centre-backs was Palhinha, but as can be seen from the example shown above, Connolly skipped past Palhinha’s challenge and Portugal were in a world of trouble.

Santos rectified this in the second half by bringing Nuno Mendes on, the new Paris Saint-Germain signing and positioning him in a more central position when Portugal had possession of the ball in the final third as opposed to merely keeping width on the left. 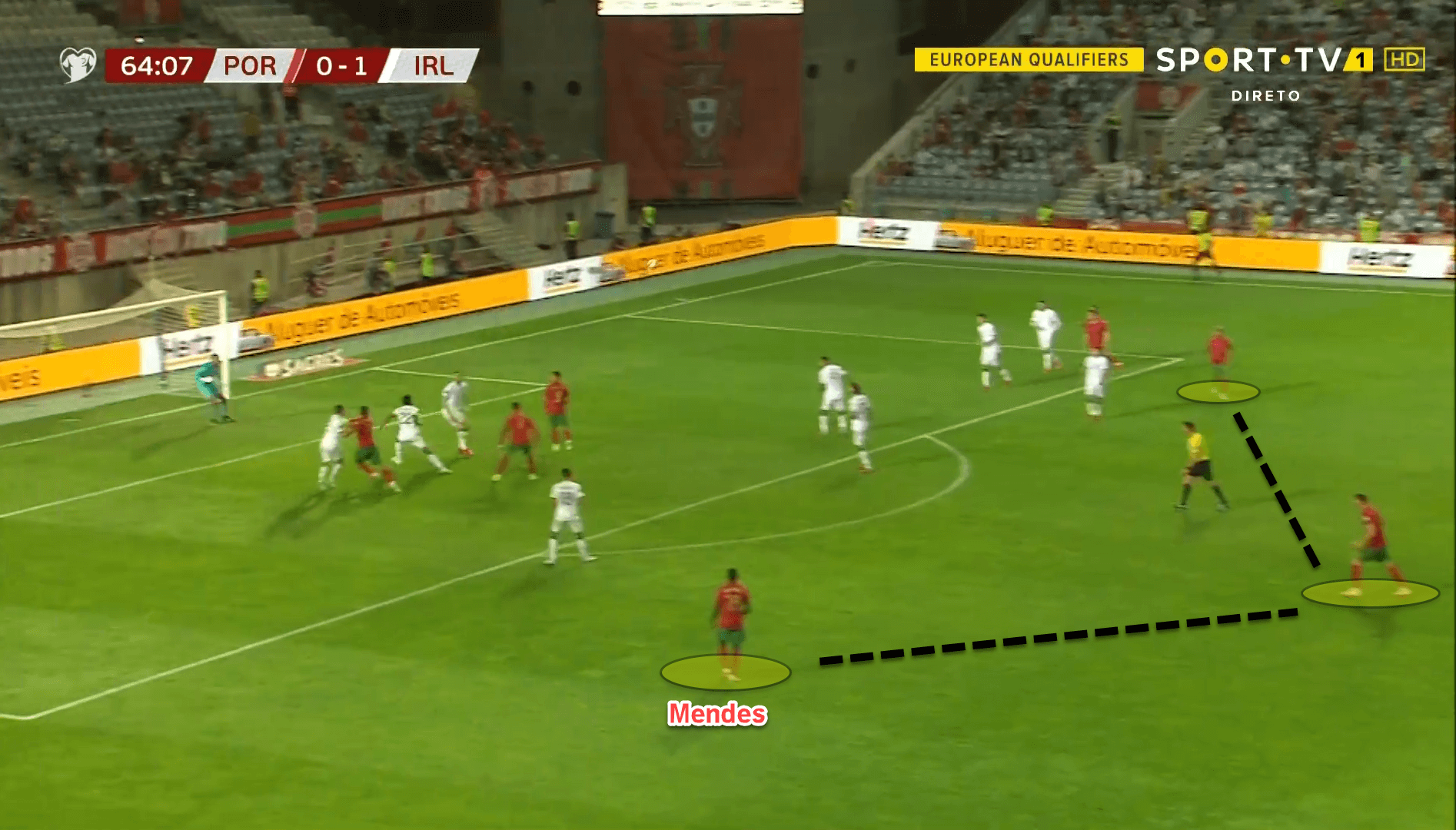 Now, Portugal were far more secure in possession as there was a much safer rest defence sitting behind the forward line in case of a loss of possession. A mix of tired legs and Santos’ tactical tweak made it difficult for Ireland to hit Portugal on the break anymore.

Ultimately, the home side were able to regain possession as soon as it was lost and bring wave after wave of attack to the Irish penalty area, where they eventually broke through the resilient chain defence to overturn the score in their favour, saving themselves from embarrassment.

There is an old saying that ‘hard work beats talent when talent doesn’t work hard.’ Unfortunately, sometimes hard work loses regardless. Ireland were very solid throughout and carried on Kenny’s game-plan to perfection until the very last whistle.

However, Portugal possesses an immense amount of quality within their squad, including a five-time Ballon d’Or winner who stole all the headlines after the game ended.

It was a disappointing end to the game for the Republic of Ireland, but the players can take pride in their heroic effort to keep out some of the world’s best players for almost 90 minutes. 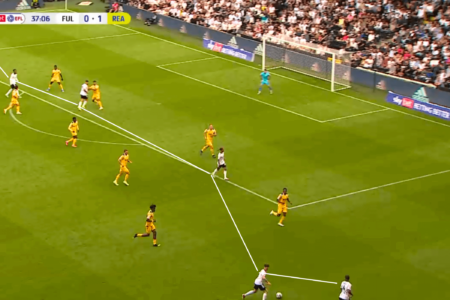 Championship 2021/22: Reading upset Fulham in their own backyard with clinical finishing – tactical analysis

The 8th game week of the 2021-22 EFL Championship saw league-leaders Fulham host Reading at Craven Cottage. After getting relegated […] 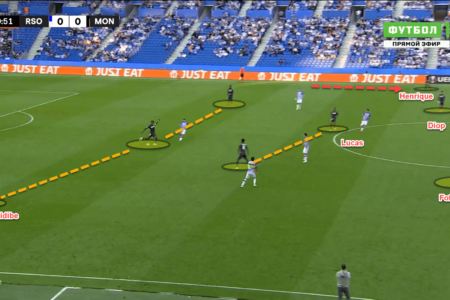