Ireland welcomed Bulgaria to the Aviva Stadium this past week for what was the final game of their UEFA Nations League campaign in 2020. Ireland boss Stephen Kenny has come under heavy scrutiny in the media for his inability to secure a win since his appointment back in September. In that time Ireland has played eight games (D3 L5) and have now gone 11 hours of play without scoring a goal.

Taking a subjective approach, however, Kenny has not had all his way, missing ten first-team players for this game, a mixture of Premier League and Championship talent laid off due to injury and positive COVID 19 tests. The Irish manager has had little time to work with the young inexperienced players in his squad, yet to be fair, they rose to the occasion when it was asked.

Bulgaria boss Georgi Dermendzhiev has come under similar scrutiny as his side are also ended their campaign on a long-standing poor run of form (W1 D2 L5), that win coming in a friendly against Gibraltar.

The game finished Ireland 0 – 0 Bulgaria, neither side satisfied with the result as both sides amounted a low xG from few attempts of 1.22 to 0.93 respectively, both managers would have felt their side had done enough to secure three points.

The tactical analysis below looks at how both managers set their sides up to get success and nullify their opposition. Here our analysis also incorporates key data into an objective and subjective analysis to highlight what was the most prominent aspects of both sides tactics.

Ireland: 4-2-3-1
Missing ten first-team players for this game, Seamus Coleman, John Egan, Enda Stevens, Harry Arter and Aaron Connolly return to their respective clubs as they nurse injures. While Adam Idah and  James McCarthy are withdrawn for personal reasons, Jeff Hendrick serves a suspension after his dismissal against Wales. Kenny does, however, give both 24-year-old Ryan Manning his first cap at senior level as he slots in for injured Stevens at left-back and 19-year-old Jason Knight as he partners with Conor Hourihane in midfield. A mixture of experience and bit-part players of this campaign made up the starting XI. James Collins got his chance to prove himself up front while Ronan Curtis was also re-introduced to the side in right-midfield with a chance to impress.

Bulgaria: 4-2-3-1
Martin Lukov gets his fourth cap as he starts in goal, while in front the back four is made up of Cicinho, Angelov, Kristian Dimitrov, Viktor Popov from left to right respectively. In front, the double pivot is made up by Kristiyan Malinov and Aleksander Tsvetkov while Galin Ivanov and Spas Delev operate on the flanks. In front leading the line is centre-forward Kraer followed closely behind by Dimitar Iliev.

Ireland played in a low-risk low-reward build-up from deep, starting with Darren Randolph playing short passes inside the box, the boys in green would move forward with clean passes into midfield after some repetitive and patient lateral passing.

The double-pivot of Knight and Hourihane was instrumental in progressing the play into the middle third, making high to low and lateral rotations to receive a pass in space before turning to play forward. Although they were wide midfielders, Daryl Horgan and Ronan Curtis were positioned more narrow in the half-spaces, serving to create space for the full-backs Manning and O’Shea to advance forward.

The playmaker Robbie Brady made himself available to receive passes higher up the field, although against the double-pivot of Bulgaria, Brady would rotate with the wide midfielders at times to receive a pass unmarked between Bulgaria’s defence and midfield.

As play would advance into the final third, this is where we would see Collins get involved with the action. Although he would rarely be a part of the build-up, the centre-forward was disciplined in his positioning to meet potential crosses between the width of the posts.

The wide players would continuously look to link up going forward, creating an overload against the Bulgarian full-backs to get in behind and deliver crosses. There was a problem with this though, as Ireland looked to build through the thirds it also meant Bulgaria had ample time to get defensively organised to meet crosses into the box. As well, as this seemed to be Ireland’s only strategy in attack, it made the boys in green predictable and easier to defend as the game wore on. 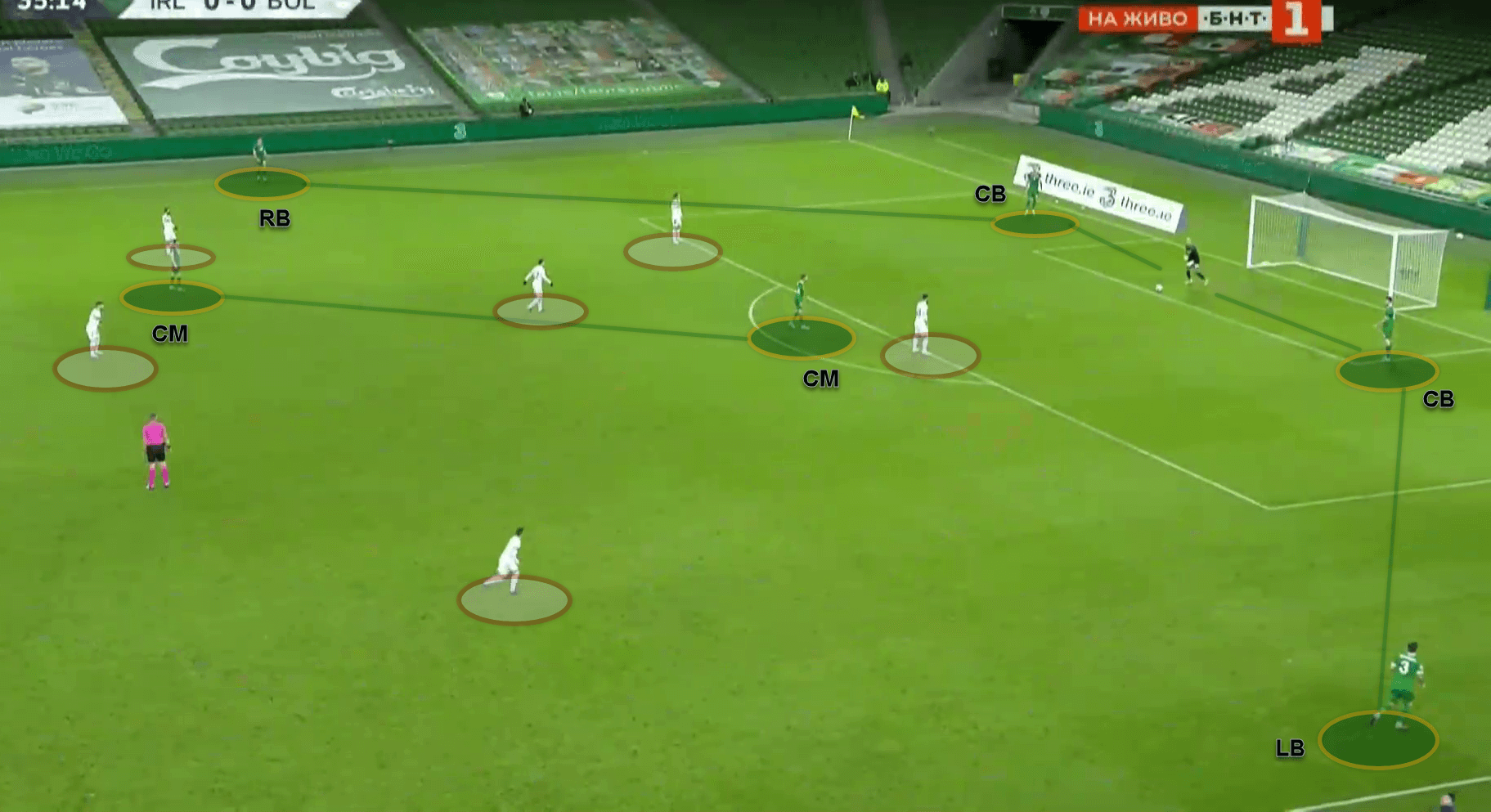 Above, we see Ireland’s starting shape as they look to build from the back, a very typical shape as the centre-backs and full-backs are stretched horizontally. At the same time, the double-pivot remain central yet staggered opening passing lanes forward. 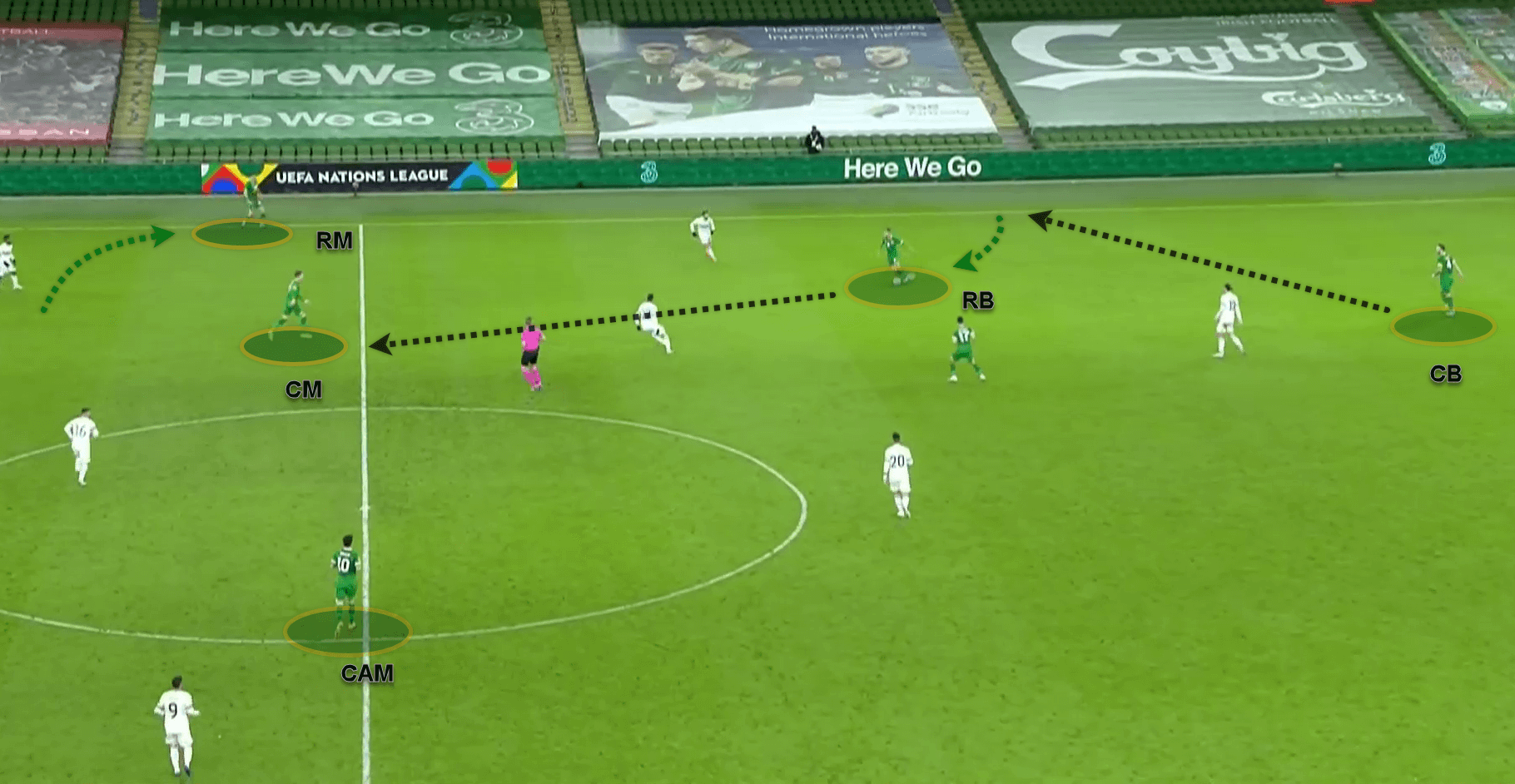 Above, we see one way in which Ireland would open passing angles forward into midfield. The wide players would move inside while the near side midfielder would move out wide in a higher position. We see O’Shea steps inside on his first touch as Curtis moves out wide. O’Shea pass to Hourihane who turns and drives forward into space. 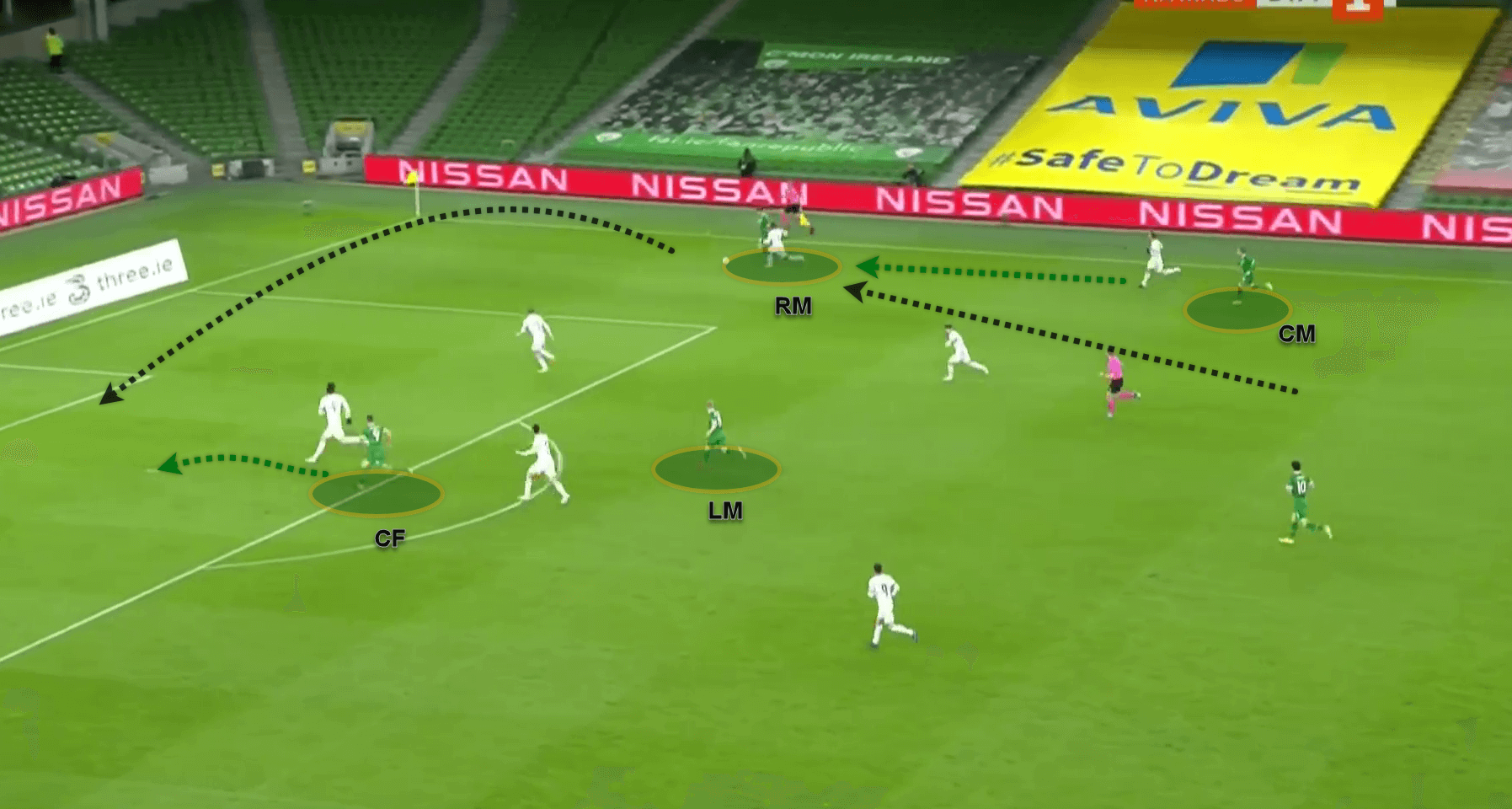 After reaching the final third, Hourihane releases a forward pass to Curtis on the right. Curtis carries the ball to the final 18 metres before delivering an out-swinging cross to meet the run of Collins entering the box. 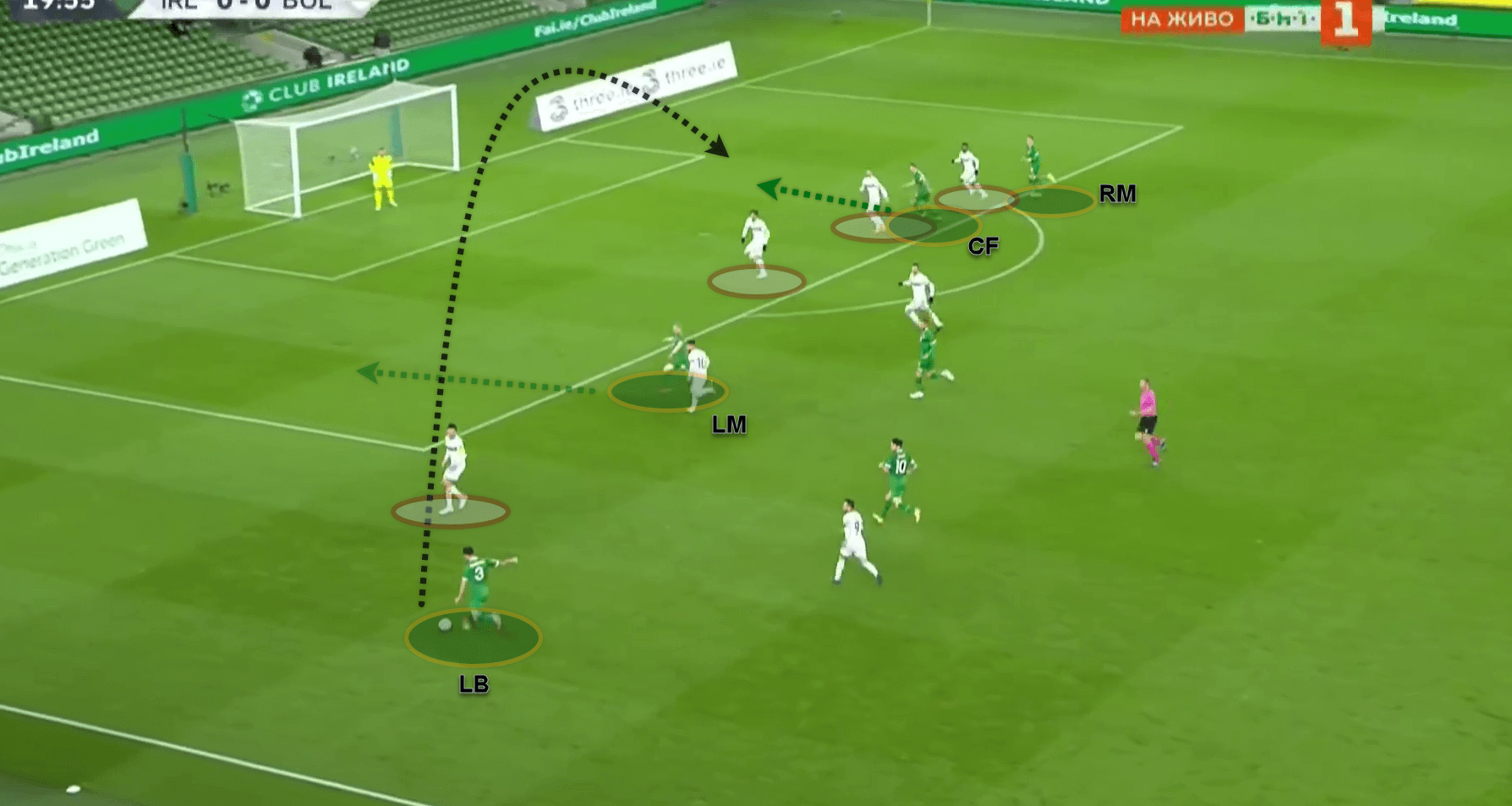 Above, we see another example later in the game of how Bulgaria is set up to defend crosses. Manning is about to deliver an out-swinging cross from the left; the ‘CF’ Curtis is the target at the back post. However, before the ball reaches that far, it is met with a strong defensive header from the centre-back. Notice, although it is difficult to say the pass could be made, Horgan makes a forward run from the half-space.

When we consider Ireland had on average 60% possession, they had somewhat less promise going forward, as from 26 attacks only 3 (12%) resulted in an attempt on goal in contrast to Bulgaria who had 5 attempts (17%) on goal from 29 attacks.

Again, considering they had the lions share of the ball, Ireland averaged fewer attacks per minute (0.37) compared to Bulgaria who managed 0.41 per minute. While Ireland’s crossing accuracy of 32% (7 accurate from 22 attempted crosses) It is clear Ireland were not as effective as they could have been going forward. The times that Ireland did trouble the Bulgarian goal was actually from quick transitions, catching out a stretched and disorganised Bulgarian defence.

Bulgaria had not the same interest or intention for more prolonged spells of possession building from the back, instead, playing more direct with long goal kicks and looking to punish Ireland quickly in the transitions.

When Bulgaria regained possession, they would luck to play forward early rather than back to safety. Helped by the fast and quickly advancing wide players who would look to make runs ahead of the ball and the centre-forward.

It must be said, although there would be an urgency to go forward and drive at a stretched Ireland defence, Bulgaria was not in the business of forcing low-chance opportunities. If the attack were delayed and subsequently held on the edge of the Irland box, Bulgaria would look to exploit the weak side of the Irish defence. 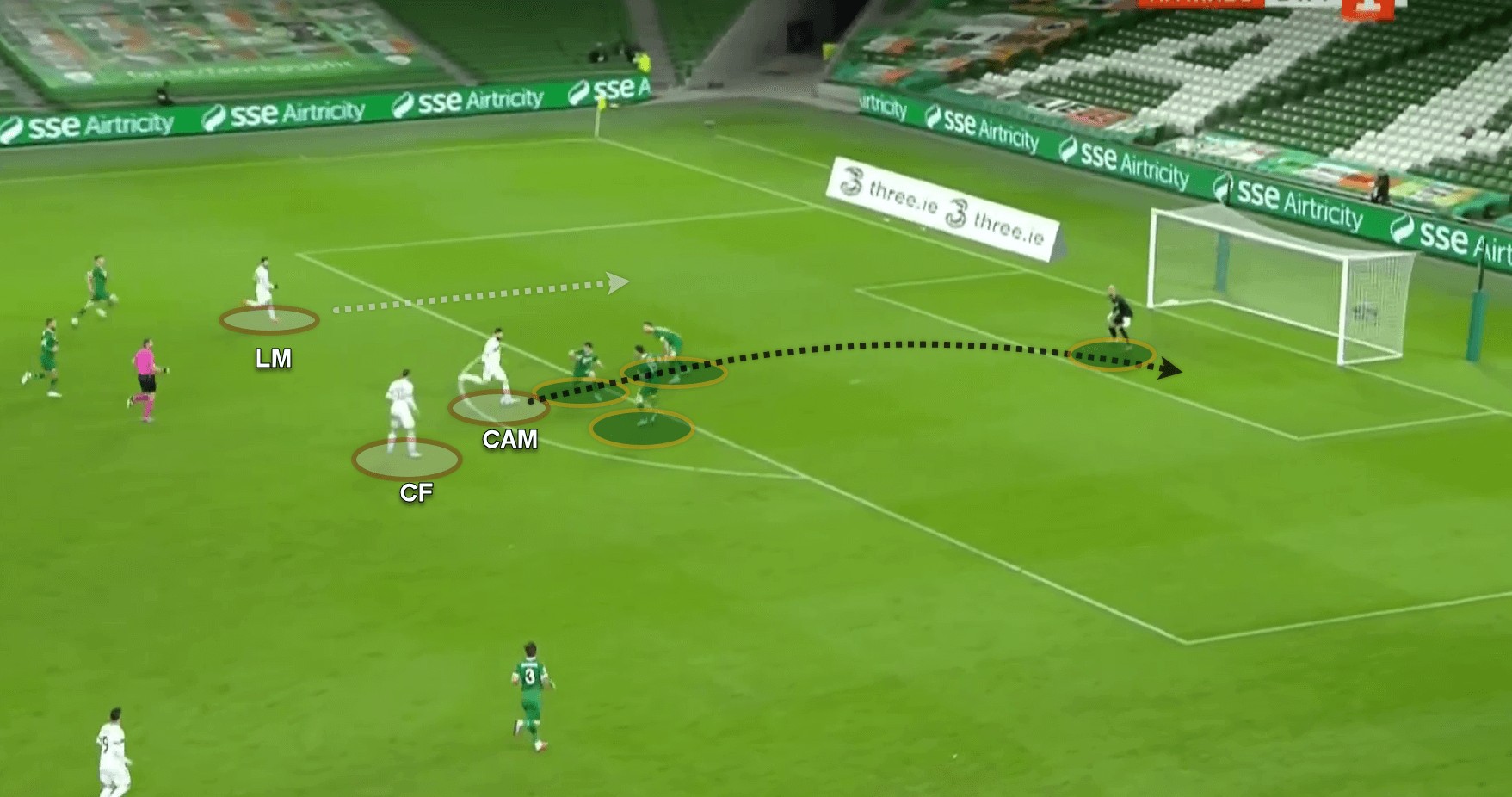 Above, is a picture taken moments after Bulgaria intercept in the middle third. The ‘CAM’ wins possession, drives forward, assess all passing opportunities and decide to have a goal attempt. The ‘LM’ does well to sprint forward and get ahead of the recovering Irish defenders.

The three images below follow a fast attack from Bulgaria. 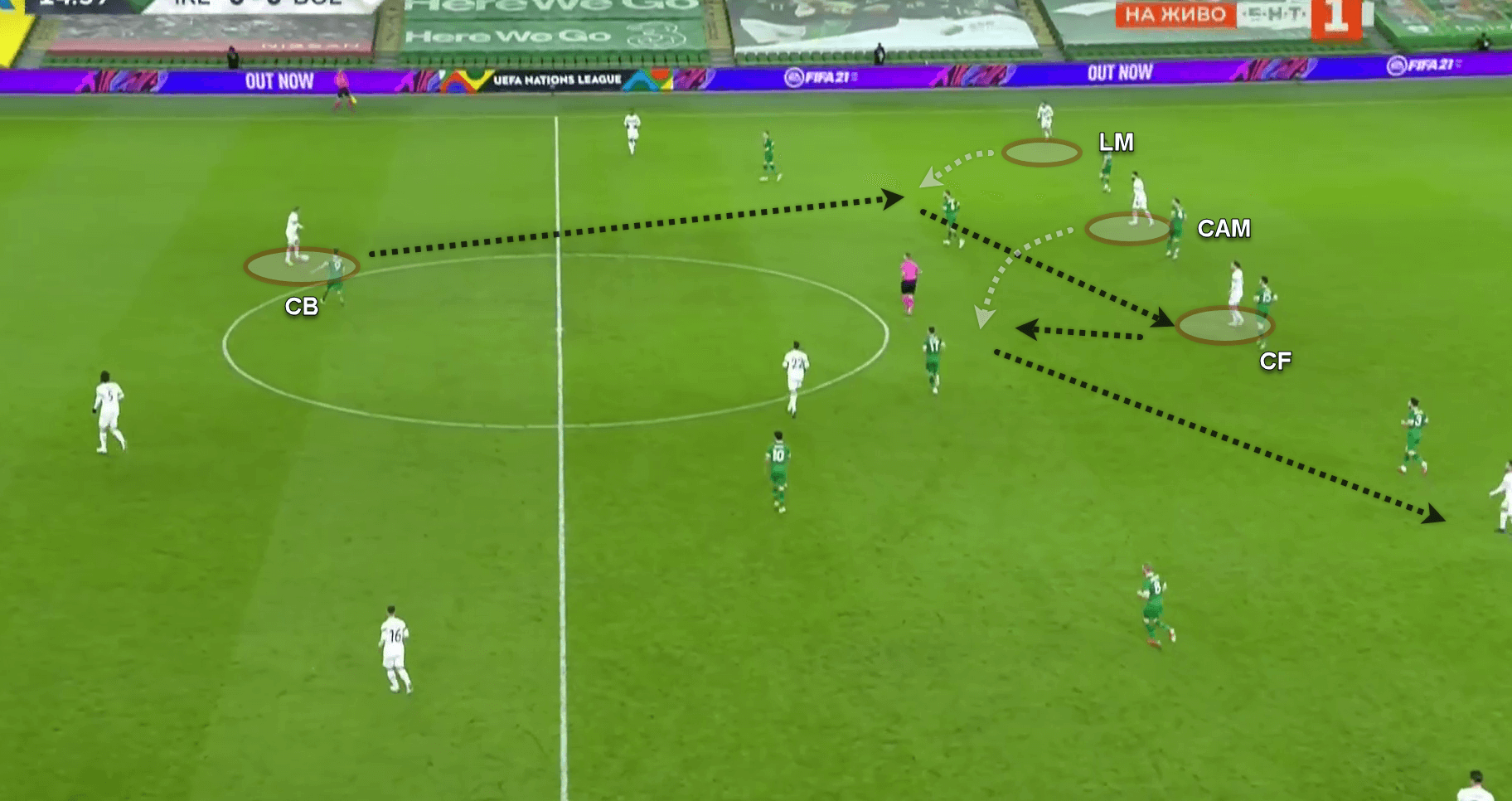 Above, we see the ‘CB’ is in possession; he plays a long ground pass to the feet of the ‘LM’. Follow the pass and movement sequence. 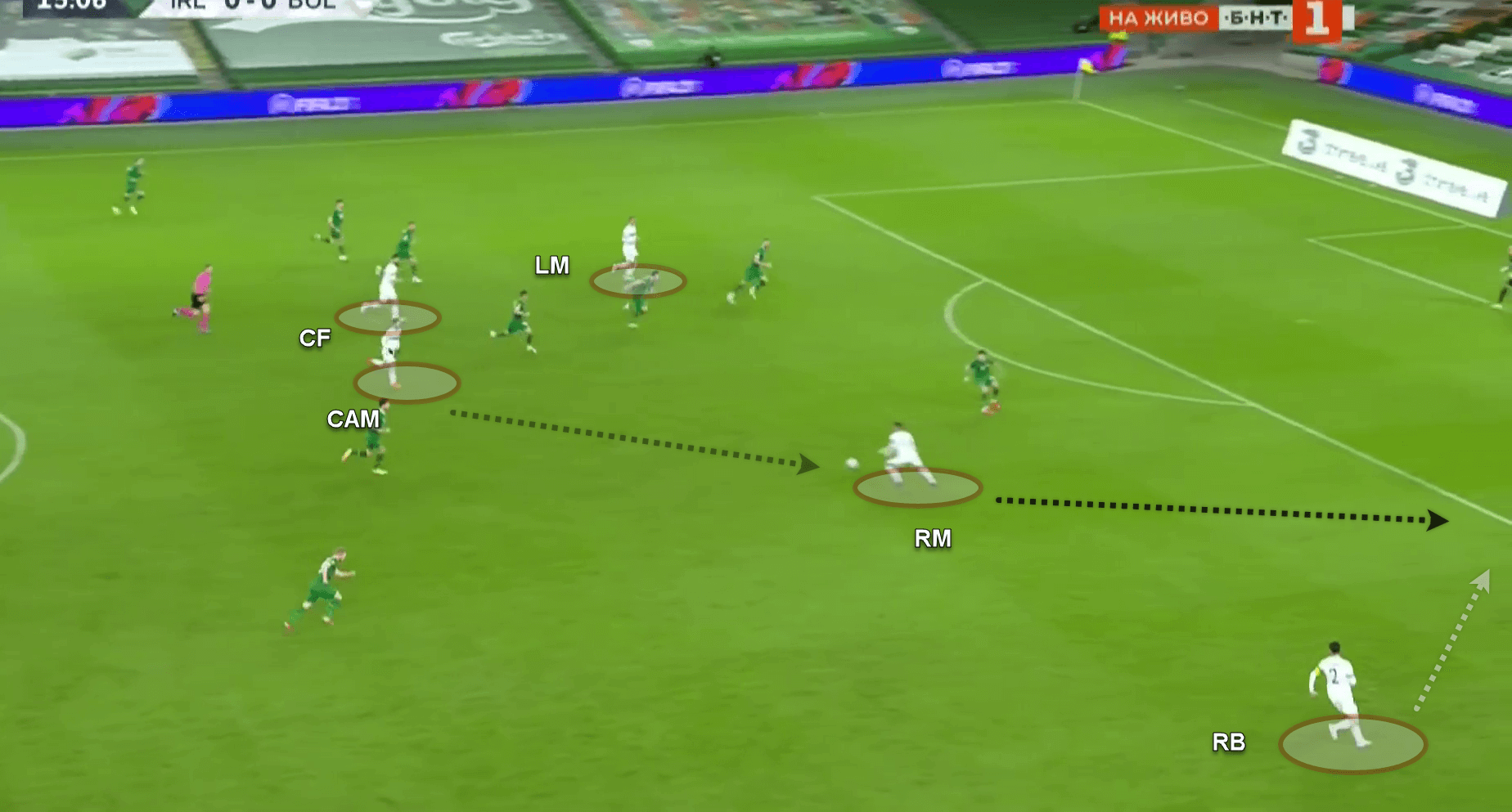 After the ‘CAM’ plays a pass forward to the ‘RM’, the ‘RM’ turns and plays a forward pass into the run of the ‘RB’. Notice the Bulgarian players sprinting to get into the box. 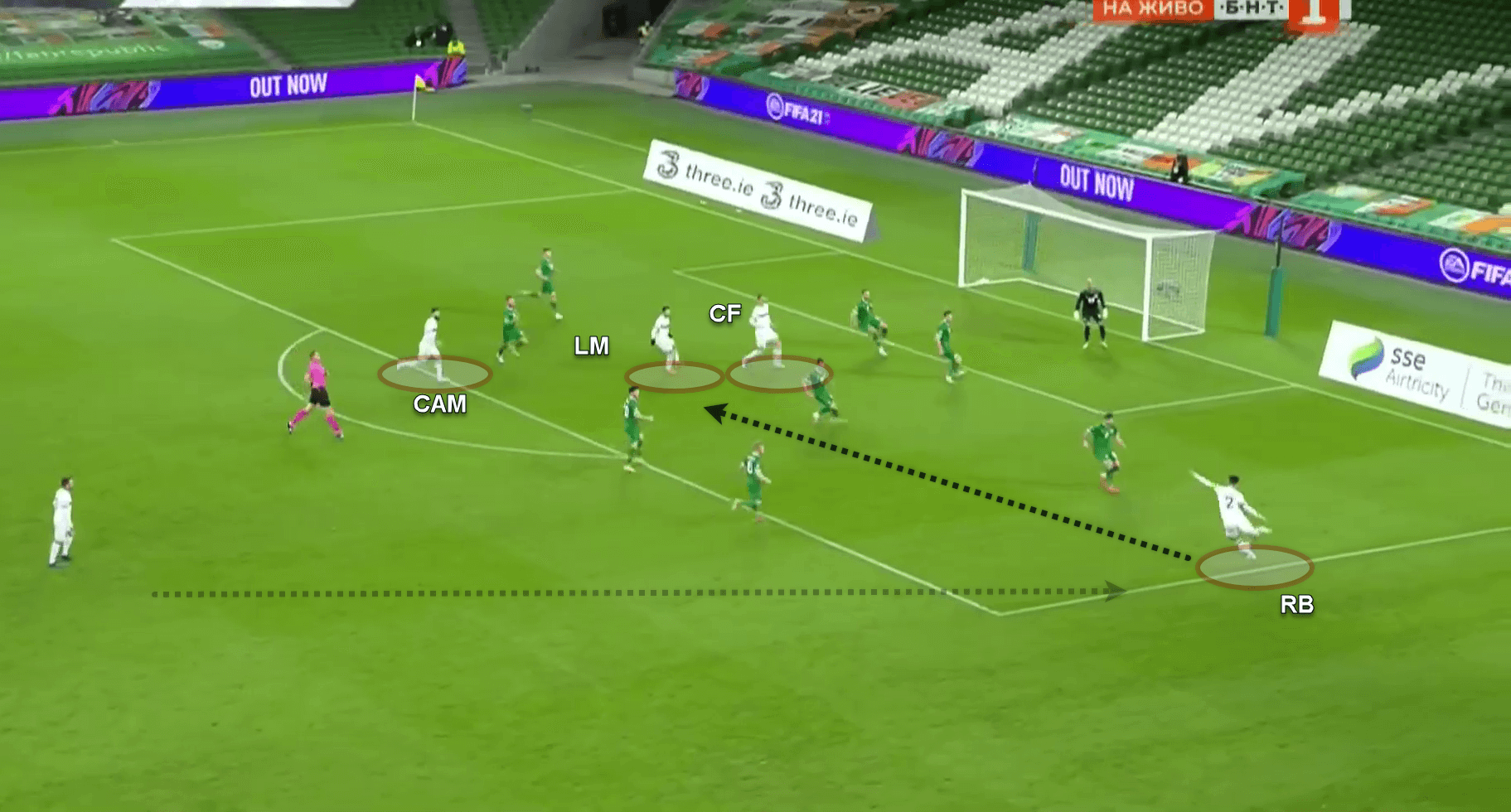 The ‘RB’ adjusts his body and on his second touch delivers a low-cross to the ‘LM’. On this occasion, Bulgaria fails to register an attempt of goal.

Although their opportunities came few and far between Bulgaria seemed more likely to open the scoring from their counter-attacks and fast transitions. The combination play and high-narrow positioning of the ‘CAM’ and the ‘CF’ in the transitions were crucial in starting and finishing Bulgarian attacks.

Ireland has improved under the first nine games of Kenny’s early reign, perhaps playing their best football relative to the modern era of the game. Quixotic opinions based on results is not a sound way of judging a manager, his staff, his ability or the players. Among the dealing with the global pandemic, Stephen Kenny has had injuries and COVID results to deal with in his camp, and that is before giving young players their first cap for their country. Ireland needs to improve in the final third, the players and the coaches know that more than anyone. For now, they have to live with near misses and chances not taken, until March that is when Ireland regroup for international duty, I am confident we will see a stronger and better equipped Irish attack by that time.

Bulgaria has problems of their own as question marks surround manager Dermendzhiev in recent weeks due to a poor run of form. Dermendzhiev’s side also seemed a bit one dimensional this campaign, and it remains to be seen if he will take them into their next qualifying campaign.