Currently, Jamal Musiala is one of the biggest shooting stars in Europe. After the 17-year-old got playing time last season already and also travelled to the Champions League final tournament in Lisbon, he has been an integral part of the FC Bayern squad since this season. Head Coach Hansi Flick seems to be convinced of his offensive player. His development is also followed very closely in England. Although Musiala was born in Germany and lived there for several years, he recently made his debut for the England U21 national team. Before that, he played in their U17, U16 and U15 and for the German U16. Due to his time in the youth academy of Chelsea FC, he feels more committed to English football. Either way, the young talent has a great future ahead of them.

This scout report will contain tactical analysis on Musiala´s attributes and his playing style as well as how he fits into Bayern Munich´s tactics.

Musiala is a very versatile player who can play every single position in attack. While he was used to playing as a central offensive midfielder in his youth, Flick lines him up as a left-winger. From this position, the young Englishman can drift into the centre and shoot or create goal-scoring opportunities with his strong right foot. Therefore, Musiala is used as an inverted left-wing. As we can see in his heatmap below, he is not staying on the touchline but tries to drift inside to get the most out of his creativity. 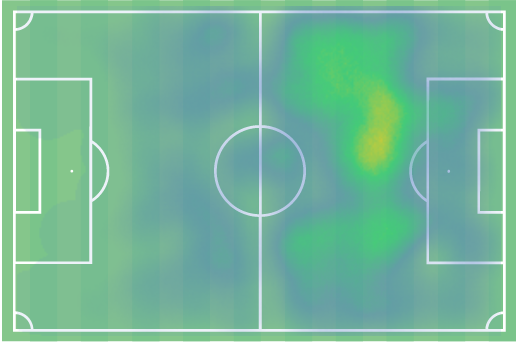 Musiala’s biggest strength is his dribbling ability. He developed and improved his ball control during his time in Chelsea´s youth academy and now, is already one of the best dribblers in the German Bundesliga at the age of 17. While having the ball close to his feet all the time, he keeps his head up. Quick anticipation and intuitive reaction are needed for his playing style. Therefore, it is nearly impossible to stop him.

As we can see in the statistics below, Musiala is providing the most dribbles per 90 minutes this season (10,1). Adding to that, 45,45% of his dribbles are successful. A quite good rate he can still improve with time. 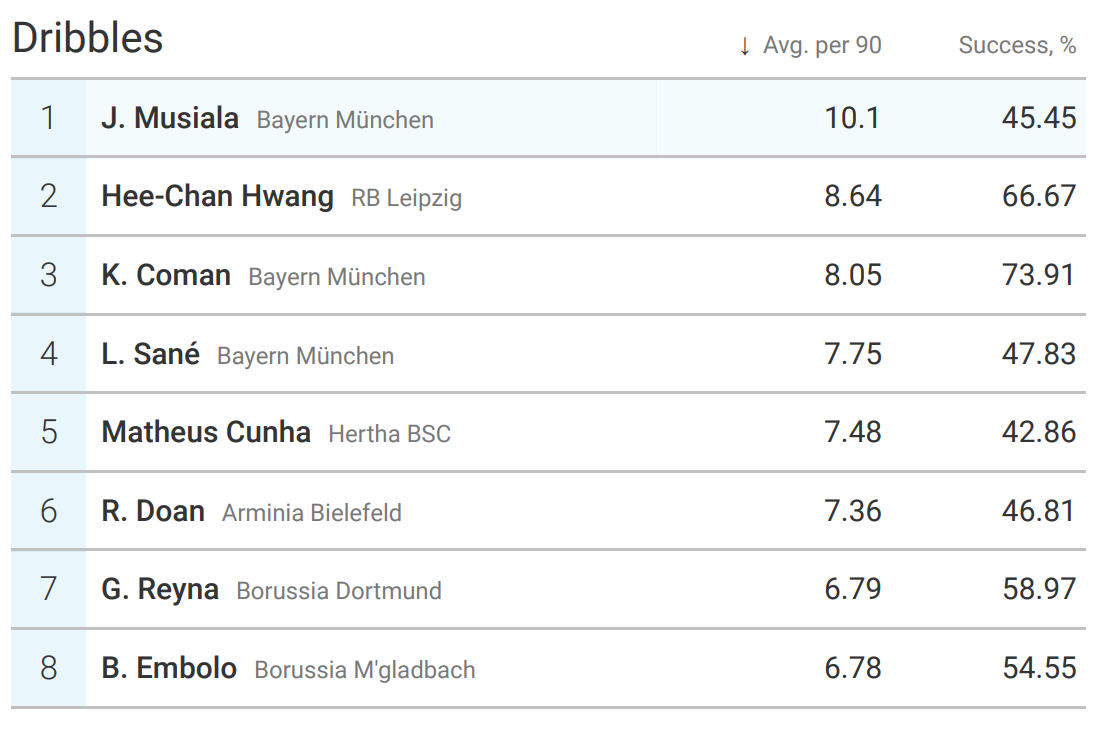 All in all, he provides the fourth-most offensive duels per 90 minutes (16,53). Because of his slim body, he sometimes has problems to win these duels. However, his dribbling ability helps him a lot in those situations. 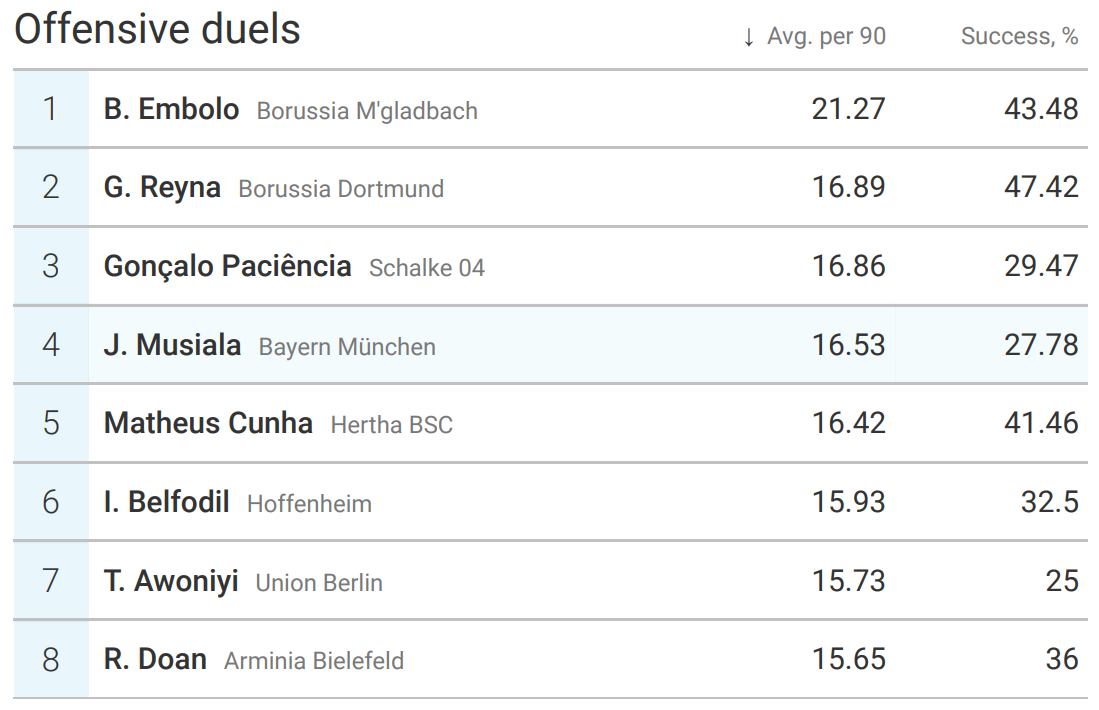 The best example of his dribbling ability is the following situation. In the DFB-Pokal match against Düren, Musiala proved his skills dribbling out three opponents in their own penalty box. 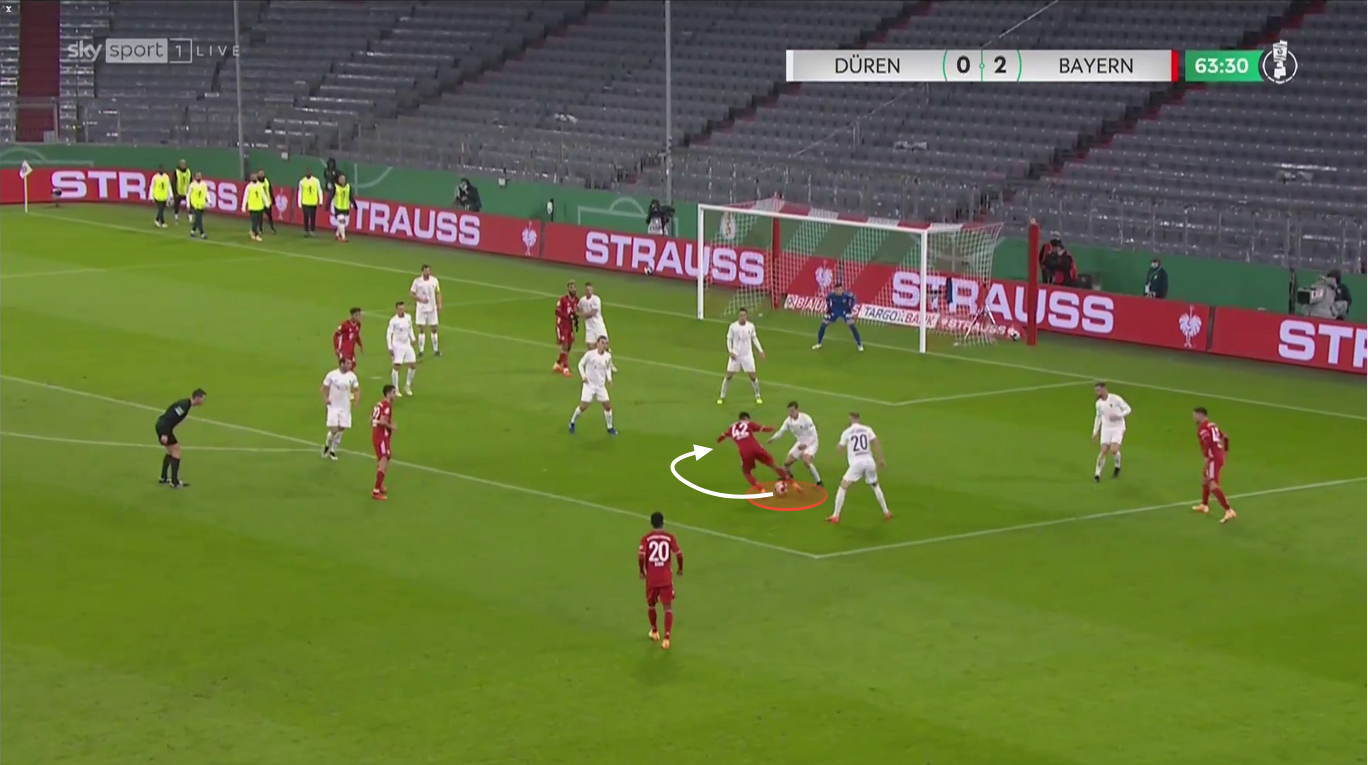 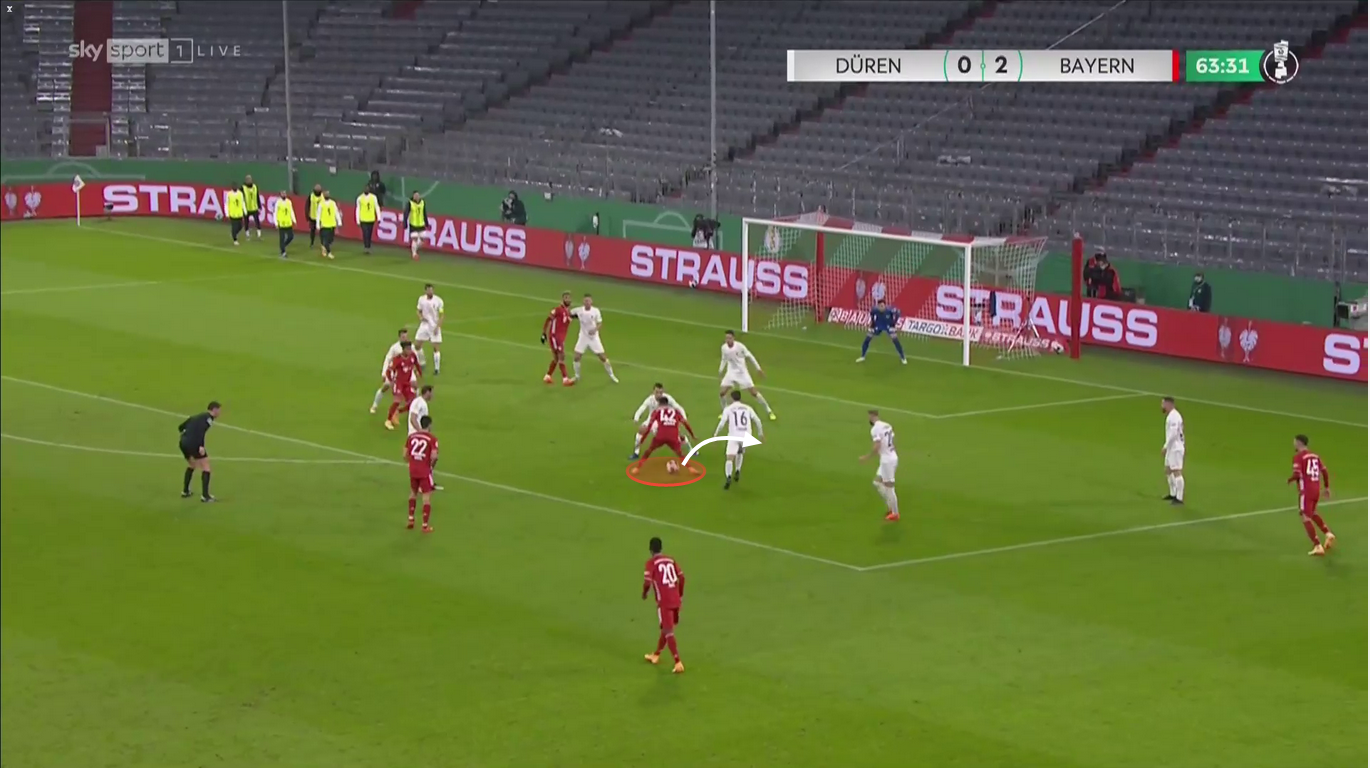 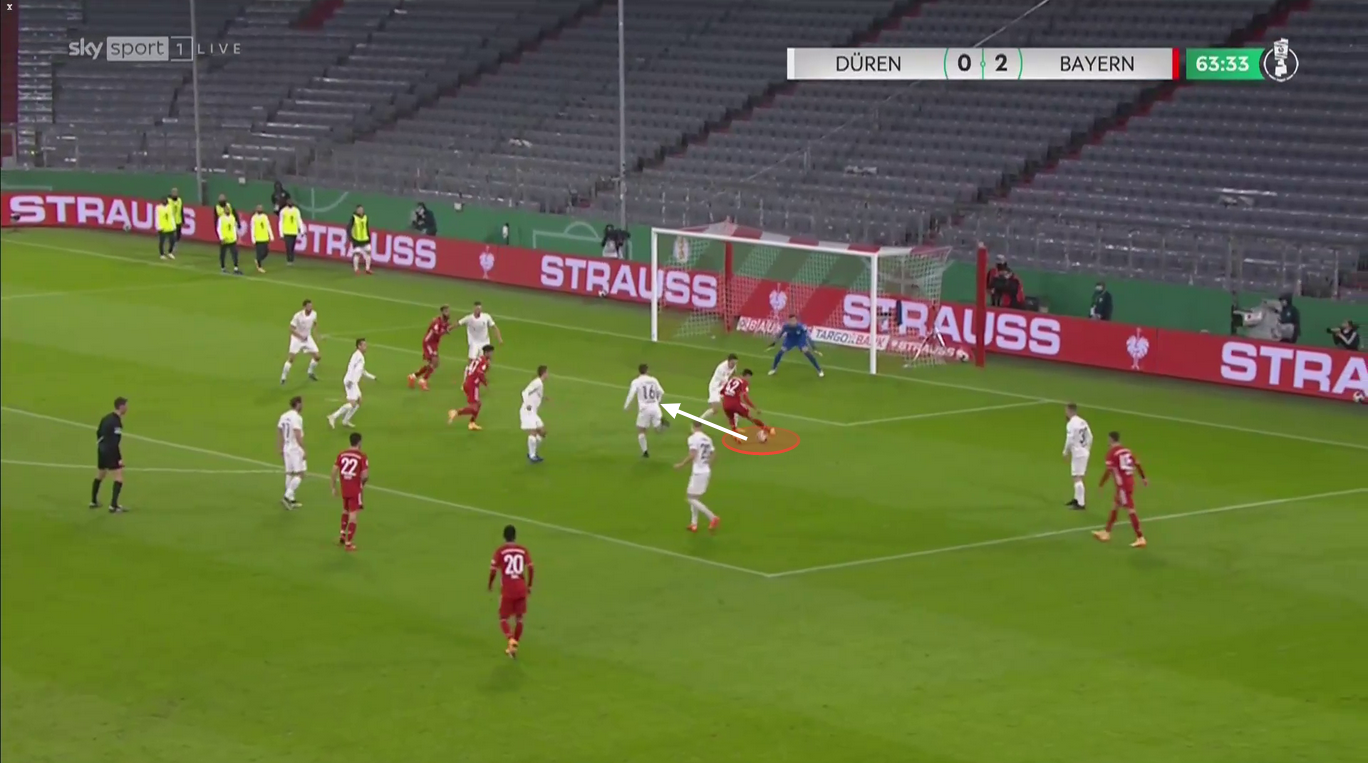 Comparing his dribble statistics from the last two seasons to the statistics of his fellow offensive players at Bayern, Musiala provided the most successful dribbles per 90 minutes (6,0) by far. But, at the same time, he lacks shot creation as he only provided 3 shot-creating actions. Still a solid rate but he will need to improve these statistics in terms of competing with the other players in Bayern´s squad. 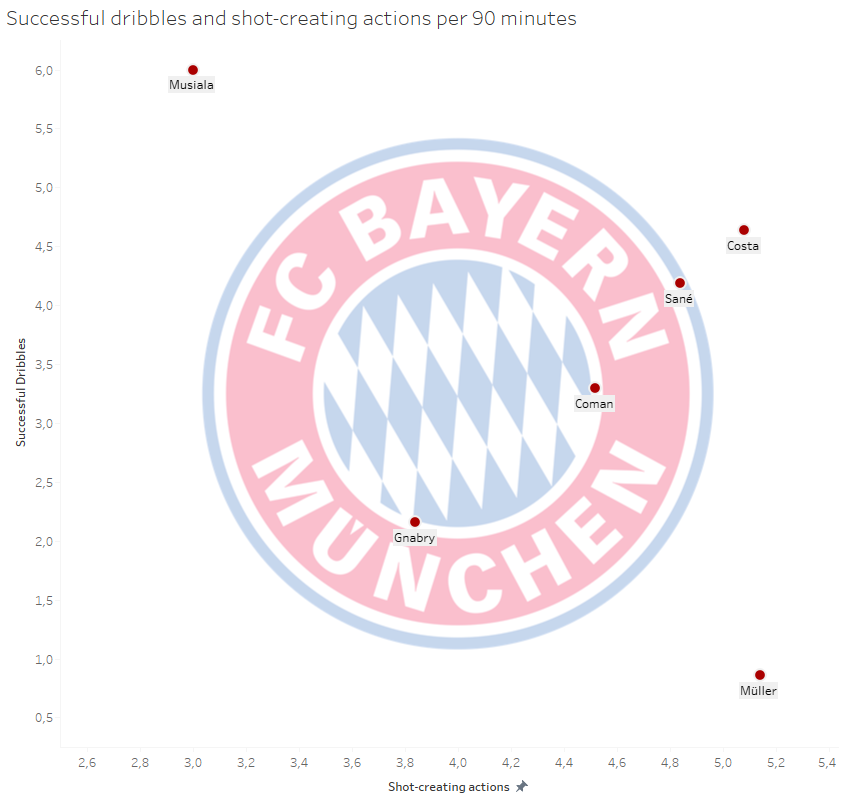 A reason for his lack of shot creation is the fact, that he is playing as an inverted winger. Instead of creating crosses, Musiala tends to drift inside to shoot. This is a reason why he always wants to get into the opponent´s penalty box. By doing so, he is providing lots of touches in the penalty area which leads to dangerous moments.

One example is his goal against Schalke 04 as he cut inside to score with his strong right foot. It is the same procedure, Bayern legend Arjen Robben did from the other side to score multiple goals with his left foot. 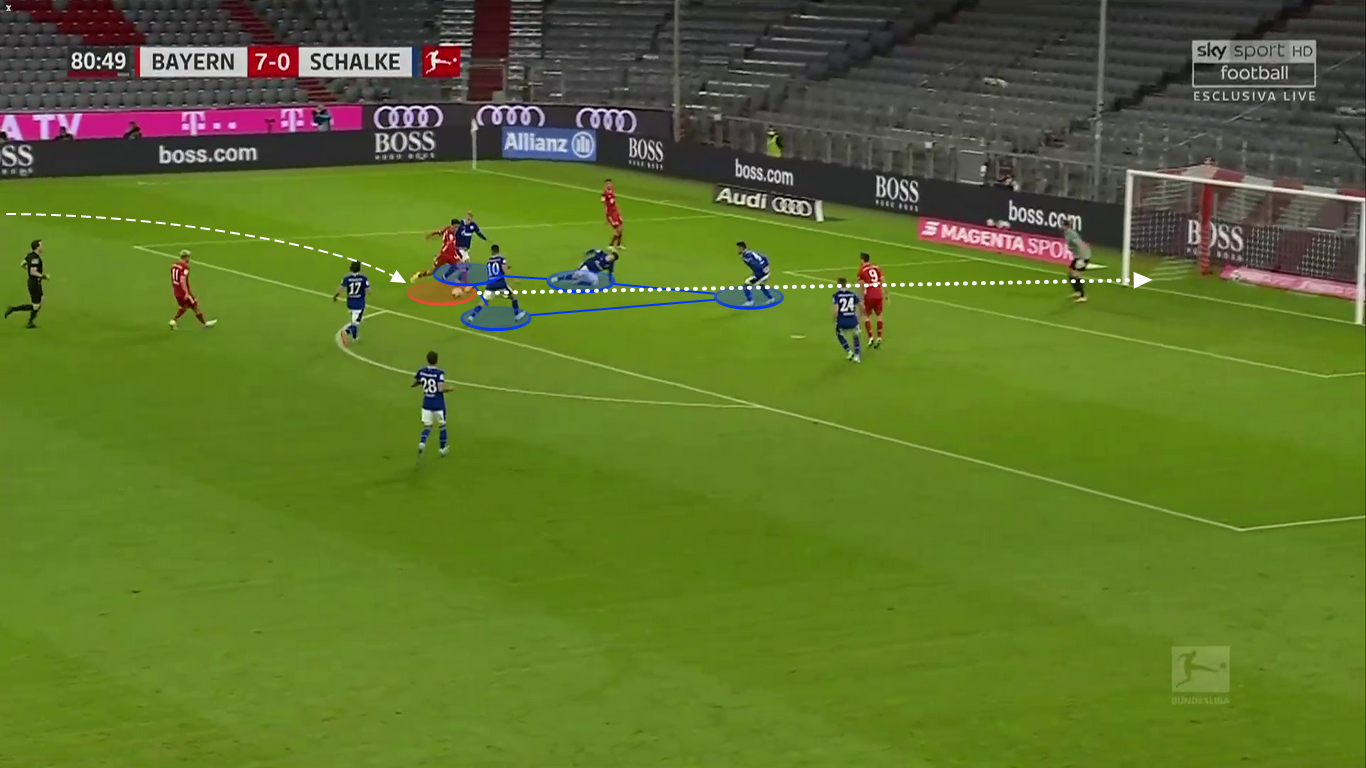 This movement also affects Musiala´s assisting output. Throughout the last two season, Musiala only provided 0,12 assists per 90 minutes. For an offensive player, this is not enough to play at such a high level Bayern play. 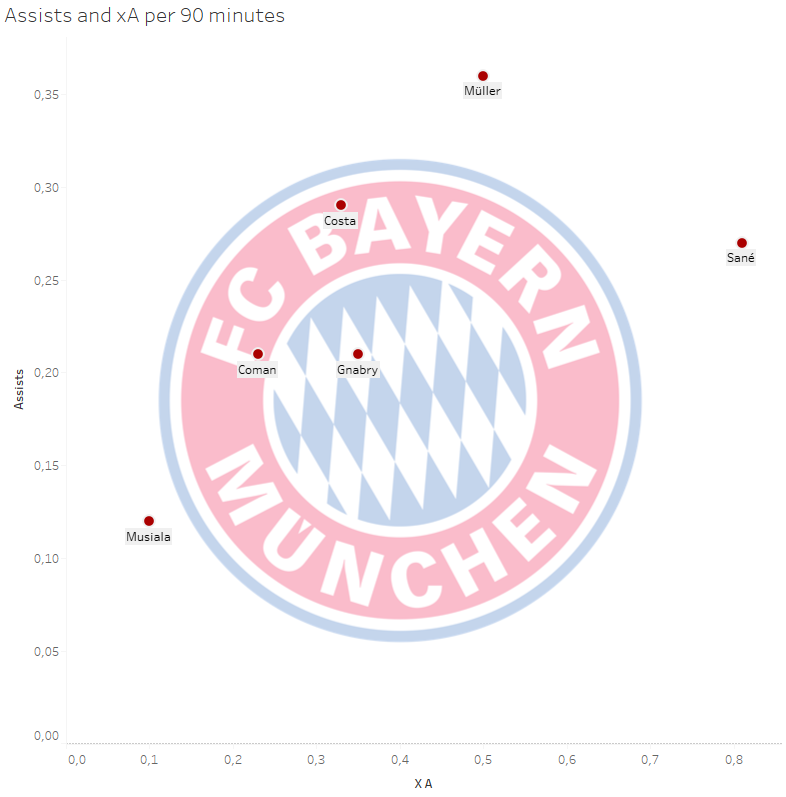 Playing on the right-wing, Musiala would probably increase his assisting statistics. But for Flick, he delivers more benefit to the match by playing as an inverted winger on the left side. So, the young talent will need to improve his left foot in order to diversify his playing style. Then, he will be able to create more crosses and automatically, more goals.

At the moment, Musiala is trying to create goal-scoring opportunities in another way. Most of his shot-creating actions are made in a deeper and central area on the pitch. As we can see in the image below, Musiala often drops deep to receive the ball between the opponents offensive and midfield line. Then, he can drift inside and plays a smart interface pass. 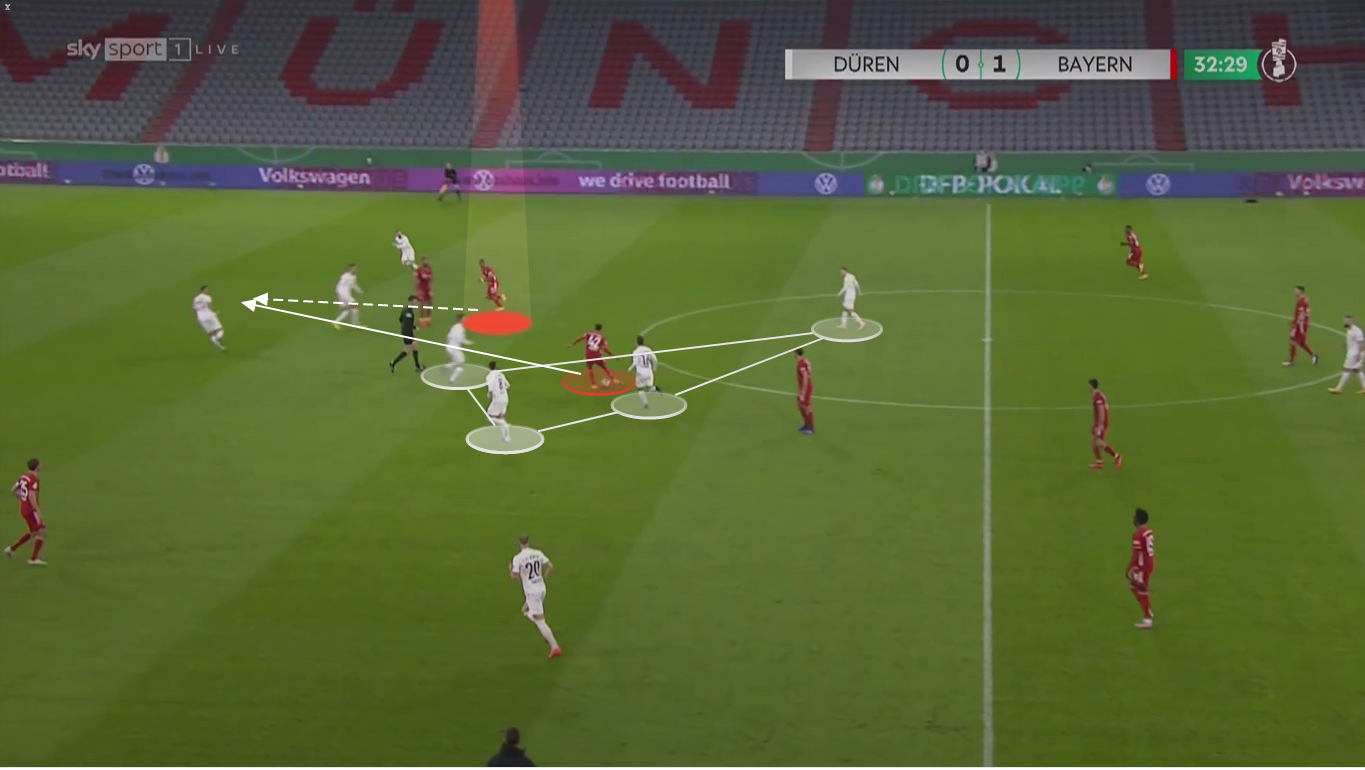 Even if these passes demand a lot of technical ability and the perfect touch, 87% of the 17-year-old´s passes are successful. This is an exceptionally good rate for an offensive wing player. Nobody from Bayern´s top offensive players can keep up with this stat. 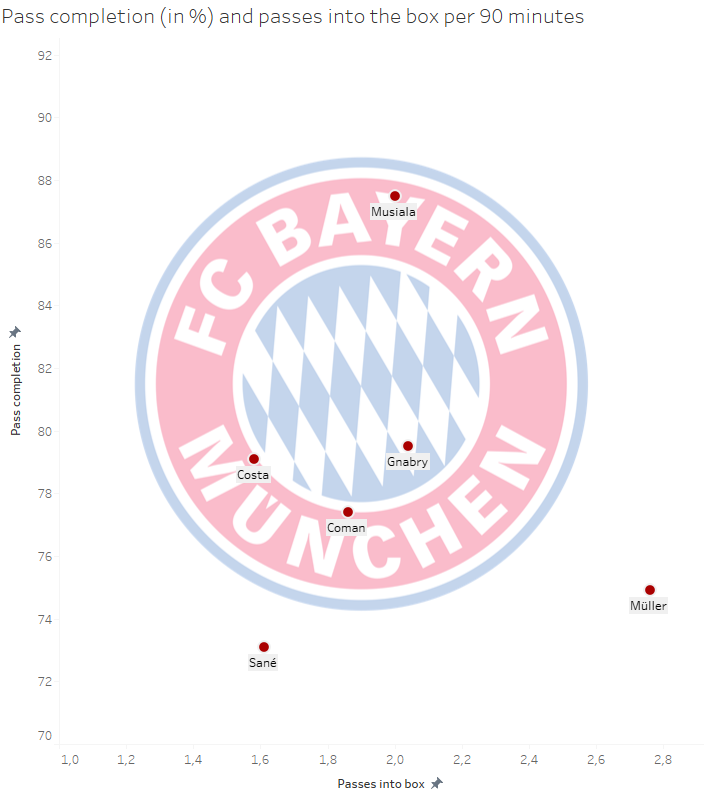 What Musiala lacks in assisting, he provides in terms of goals. Having an xG rate of 0,37 per 90 minutes, Musiala is involved in 0,42 goals per 90 minutes. This rate is only topped by Thomas Müller and Serge Gnabry with both having a higher xG as well. By receiving even more playing time, Musiala will be a goal thread in Flick´s team. 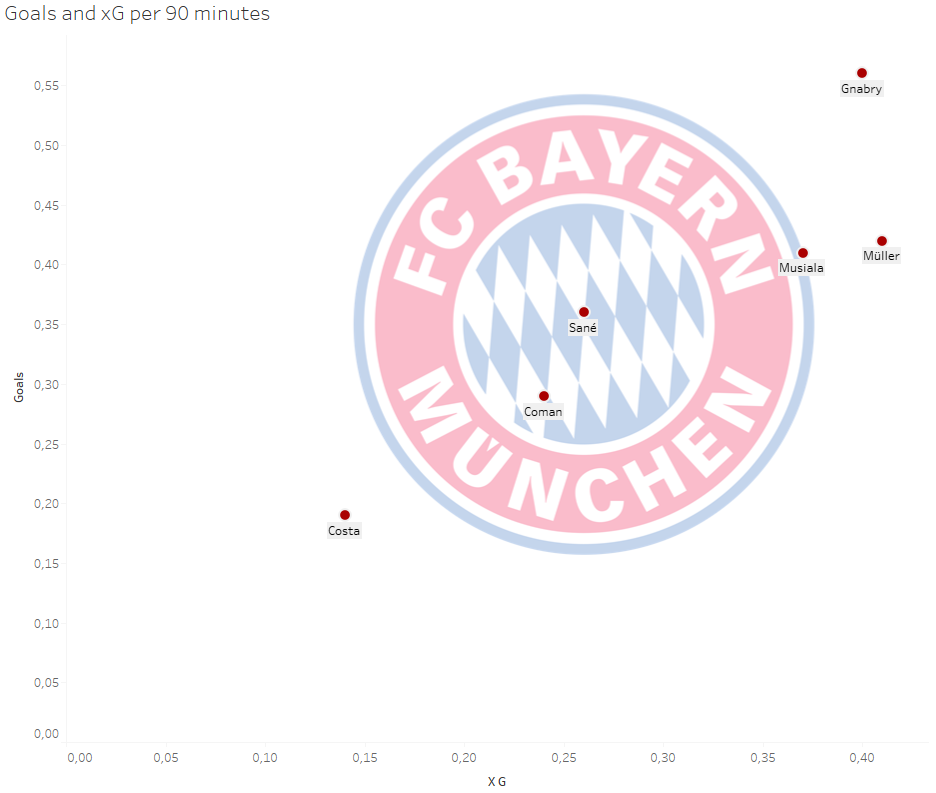 Jamal Musiala is a name to remember. At the age of 17, he has lots of areas to improve. But, he is already one of the best offensive players in terms of dribbling and goal scoring. By receiving more and more playing time within the next two years at Bayern Munich, Musiala could be the next superstar in the team of the German “Rekordmeister”.