Week four of the 2022 FIFA World Cup Qualification featured Uruguay receiving Brazil in El Centenario. Both arrived at this game with absences; the most relevant were former Barcelona players Neymar, injured and Luiz Suárez with COVID. One half was enough to give the victory to visitants in a game that the locals could not repeat their performance against Colombia. The expectations were higher in a poor game which ended with a 0.9 xG combining both team opportunities.

In this tactical analysis, we will analyze Tite’s tactics to outplay Uruguay’s pressing strategies. This analysis will look in-depth at Uruguay tactics in possession to explain their lack of scoring opportunities. Finally, we will show why the game remained unchanged for the whole second half. 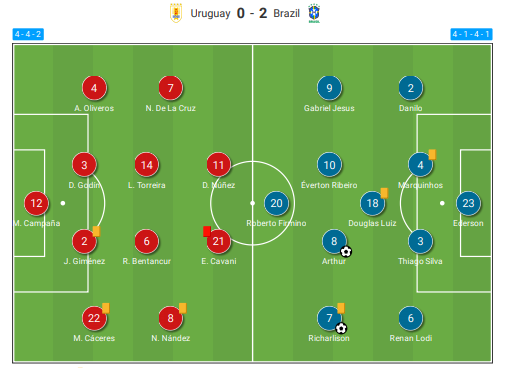 Óscar Washington Tabárez used his preferred 4-4-2 formation with two substitutions from their last game against Colombia. With Suárez and Matías Viña not able to play due to COVID, the Uruguayan youngster of Nacional Agustín Oliveros entered in the left-back position. At the same time, Darwin Núñez replaced Atlético Madrid’s striker.

Tite repeated the 4-1-4-1 formation with just one substitution from the last victory against Venezuela. Arthur started for the first time in 2020 for Brazil, replacing Allan with Douglas Luiz shifting to the holding midfielder position. The rest of the team remained unchanged.

Even though Brazil did not create many scoring opportunities in the first half, they managed to progress the ball through the thirds with ease to dominate the ball possession (56% ball possession in the first half). Uruguay settled the same pressing tactics that gave them benefits in their game against Colombia, in which they scored after recovering a ball in Colombia’s build-up. Uruguay tactics were pressing Brazil’s lone pivot, usually with Rodrigo Bentancur stepping forward and arriving at Luiz’s first touch. At the start of the game, Uruguay pressed successfully, not allowing the opponents to progress the ball. The next picture shows Brazil positioned in a 4-3 build-up, and Bentancur arriving to challenge Luiz; he got this ball but committing foul in what would have been an excellent chance to counter-attack. 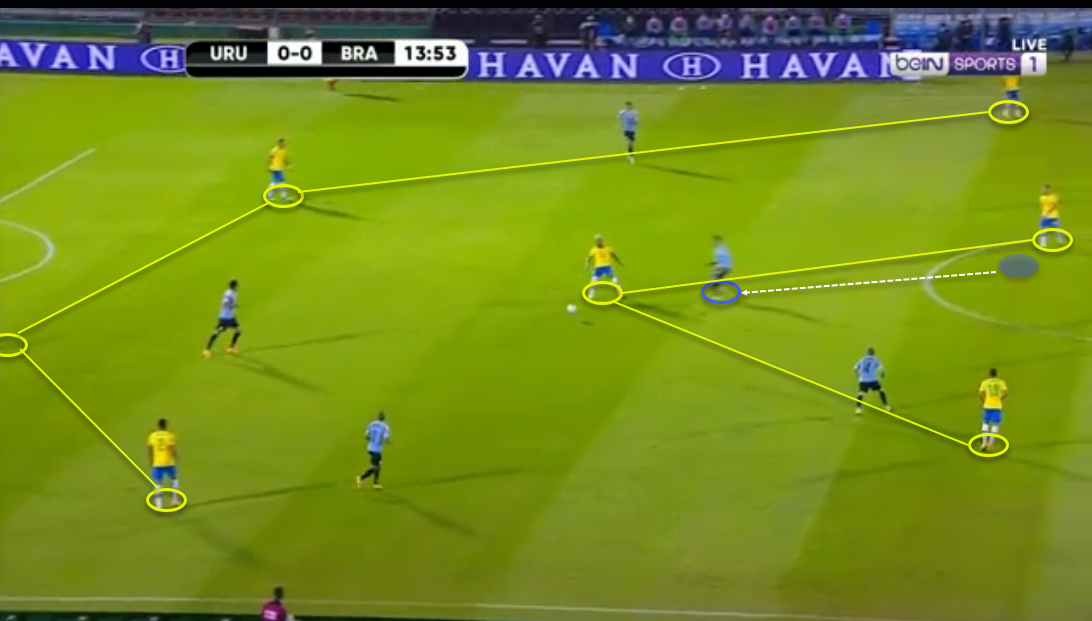 Brazil fixed this early in the game, creating a numerical superiority centrally. Uruguay strikers pressed the centre-backs in a flat line and used their wings to mark Brazil full-backs. Tite read this and add a second player centrally, creating an overload in the central channel. Either Arthur or Éverton Ribeiro dropped deep to make a double pivot, should Bentancur press one of the pivots, the other would remain free to progress the ball. The centre-back’s wide positioning also allowed the double pivot to played in a wide area, as depicted in the following picture. Uruguay strikers should have used a shadow press or positioned staggered, cutting off forward options not allowing the centre-back to connect with the pivots. 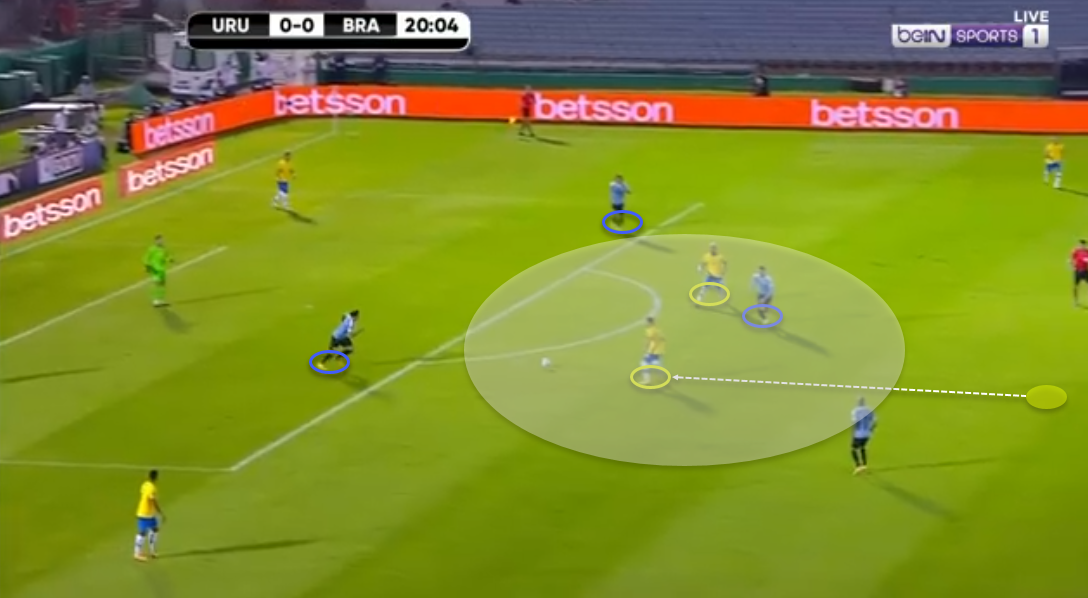 Another way Brazil managed to progress de ball through the thirds was dropping Luiz deep and creating a back three. We have seen this tactic used by Brazil in previous games, and works perfectly against teams pressing with just two strikers. Renan Lodi in the left flank stayed forward, committing Uruguay winger to remain deep. With this movement, Luiz gave an option as left centre-back creating a 3v2. Bentancur not following Luiz in this deep position allowed the Brazilian to be free with space to progress the ball. 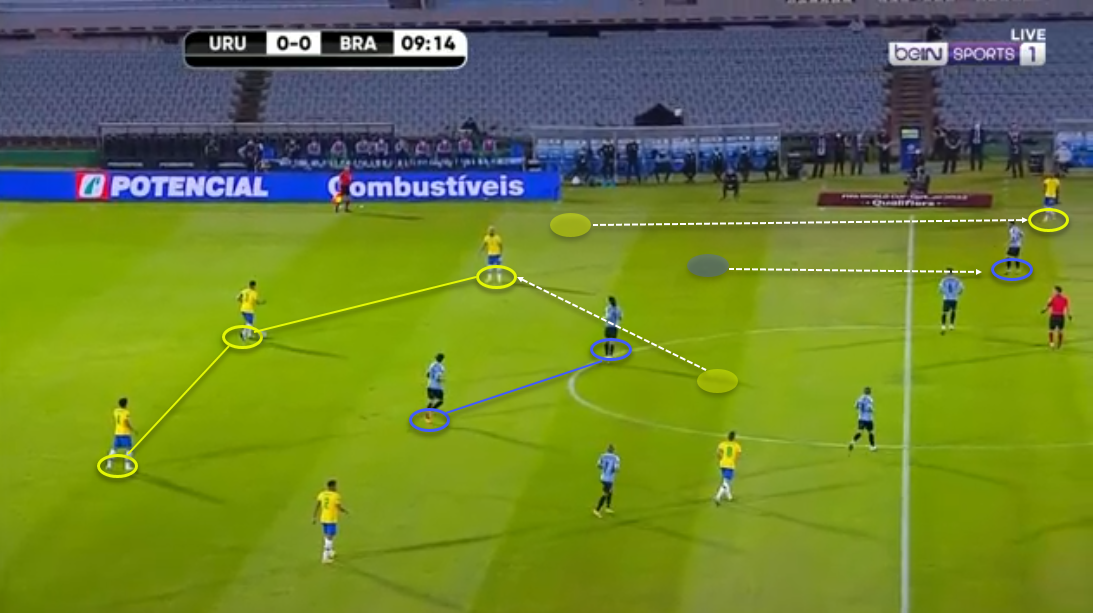 Finally, another factor that gave Brazil chances to progress the ball to the middle third relied on Uruguayan wingers’ lack of quality to press when the ball arrived at Brazil’s full-backs. When Brazil switched the ball from side to side, Uruguayan wingers had to arrive on time on the full-back. Arriving late or pressing in the wrong direction allowed Brazil full-backs to progress the ball a couple of times. This happened more on Brazil’s right side than on the left. The next picture shows Brazil’s build-up of their first goal. The ball was switch to Danilo, who played the ball to Everton behind Nicolás de la Cruz. Here, the Uruguayan winger could not arrive on Danilo’s first touch, neither able to block Danilo’s progressive pass due to his square press. 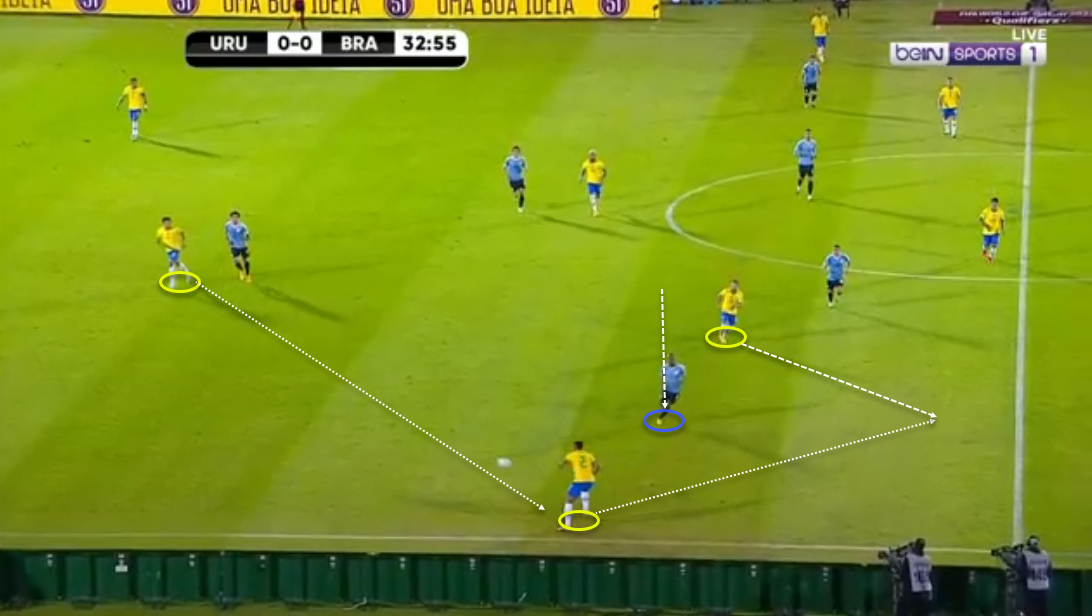 After scoring three goals in their game against Colombia, Uruguay finished this game with an 0.56 xG. Next, we will analyze why this lack of scoring opportunities happened. Uruguay played in-possession in Tabárez preferred 4-4-2 formation. The problem in Uruguay’s positioning was the lack of options given in the central pocket. Wingers stayed wide, giving the team width, and both strikers stretch Brazilian defense. Albeit, with Uruguay using two holding midfielders in Lucas Torrerira and Bentancur, no player was positioned between the lines. The next picture depicts this lack of participation of Uruguayan players in between Brazil lines. 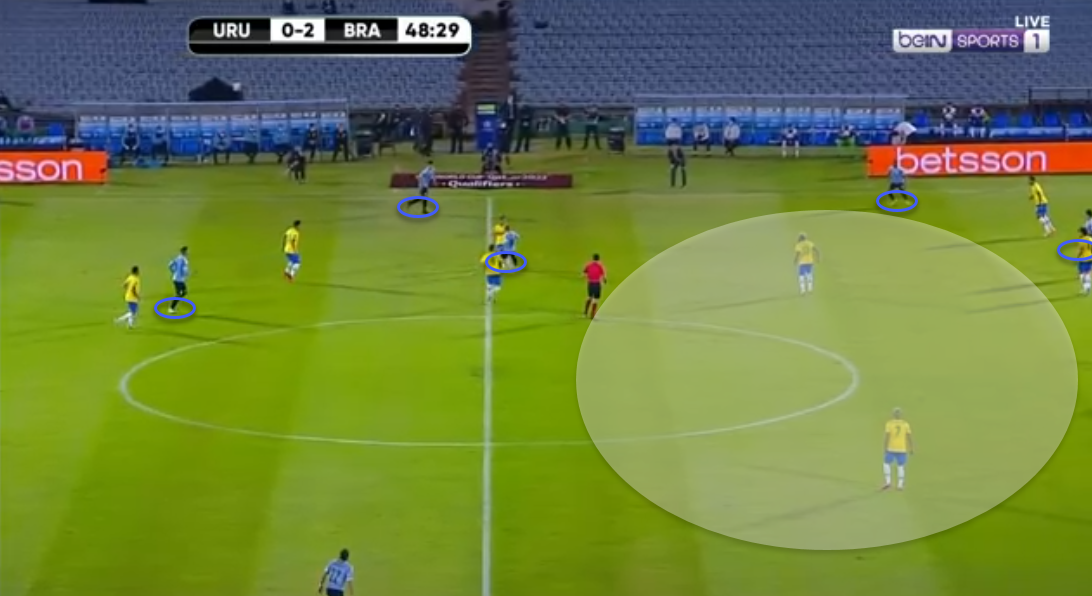 Here we can see another example of the lack of players behind Brazil lines. In this example, we can see the gap created by Núñez stretching the defensive line and by Edinson Cavani dropping deep in front of Brazil’s midfield line committing Luiz and Lodi. Here is Nahitan Nández, the free man, albeit his position didn’t give Martín Cáceres and option for a progressive pass. There was a gap in the half-space, albeit neither Nández nor Núñez dropped into it. Uruguay had three players positioned in the same wide lane; one of them staying in the half-space would have allowed Uruguay to collect the ball behind Brazil’s midfield and create a 2v2 in Brazil backline. 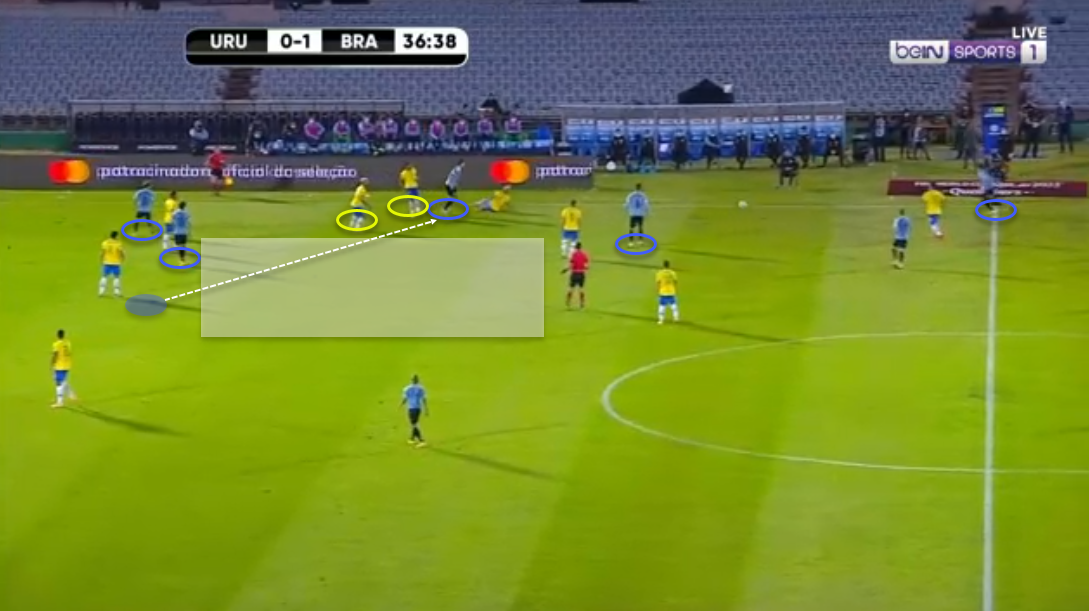 With this lack of advanced options in their build-up, Uruguay ended up playing long balls to their strikers. Even though playing with two quality players of the likes of Cavani and the new youngster Núñez, they were targeted from long distances and with no option giving support underneath the ball. In the next picture, we can see one of these long balls played into Núñez, man-marked, and Luiz pressuring from the other side. With the wingers keeping the width and the holding midfielders in a deep role, both strikers’ only option was flicking the ball for a run in behind. Uruguay relied on these frontal long balls or wide crosses, in which both strikers were well marked by Brazil’s defense, who only allowed them 7 touches of the ball inside the box. 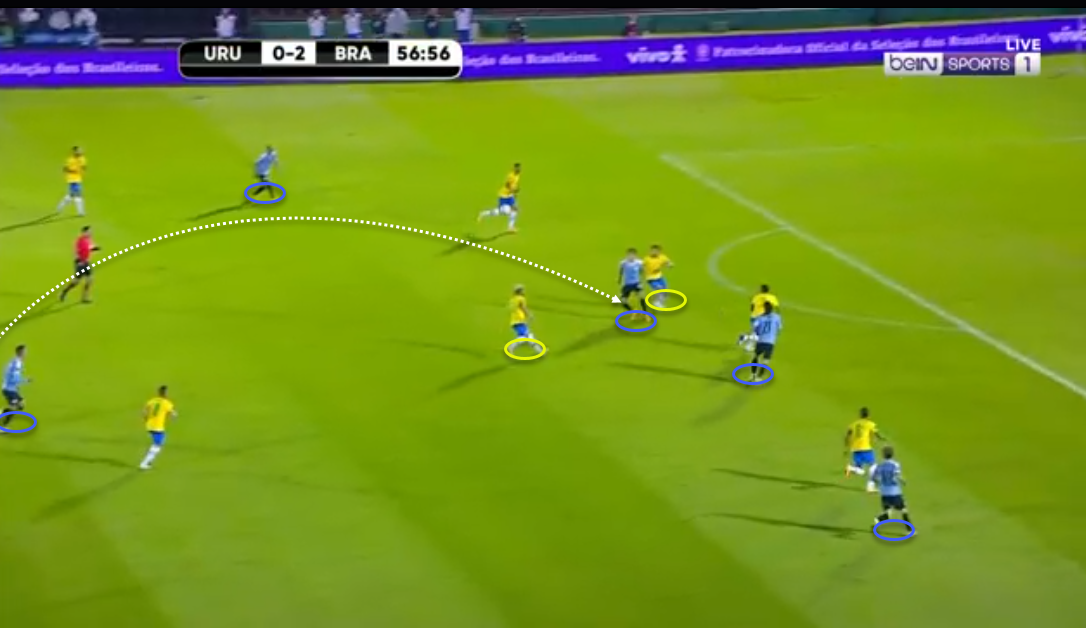 What worked against Colombia did not work in this game; Brazil well-defended Uruguay counter-attacks. Brazil always kept a back three-plus Luiz staying centrally. With this rest-defense, Brazil had a defensive overload to delay Uruguay counter-attacks. In the next picture, we can see a long ball played to Núñez, who had to run against three Brazilians. We can see that Luiz is closer to the action than any other Uruguayan player. 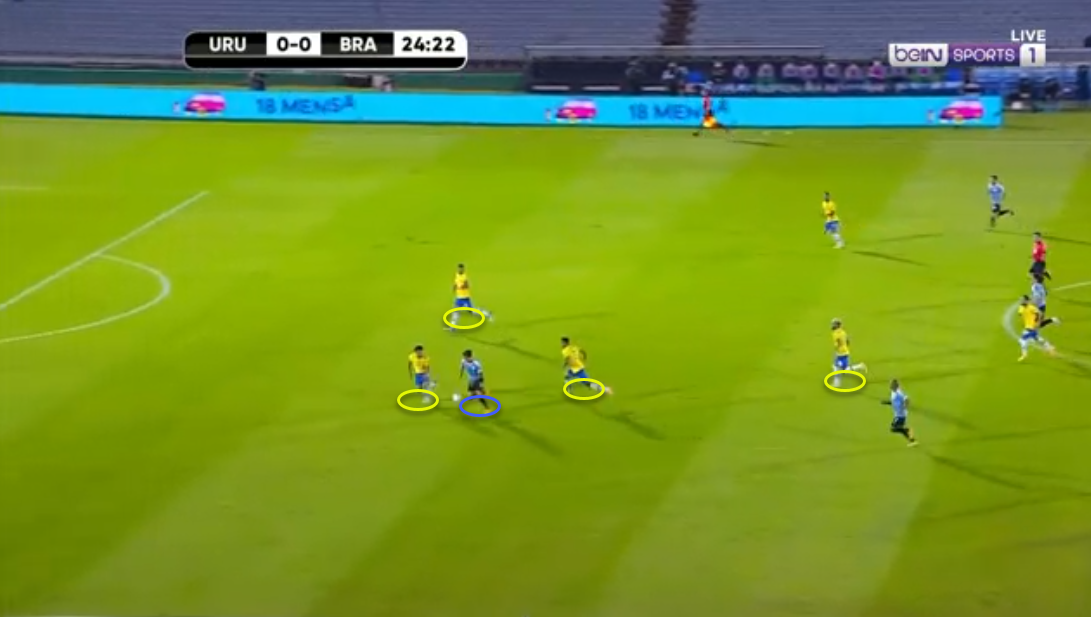 After Brazil’s goal, the game entered into a slow-tempo game; Brazil sat deep and conceded Uruguay the ball without pressing their build-up. Brazil dropped their PPDA from 8.4 to 18.0 after the second goal. In the next picture, we can see Brazil pressing with just two players in the Uruguay half. Everton or Gabriel Jesus joined Roberto Firmino to press Uruguay centre-backs. Their press was effective as only one pressed at the time, with the other cutting off forward passes to Uruguay’s second pivot. In the next picture, we can also see Firmino press as he does on Liverpool; he checks his shoulder to see Torreira’s position to press Diego Godín shadowing the Uruguayan pivot. In this way, both strikers could mark the centre-backs and shadow Uruguayan pivots, forcing Uruguay to go long. 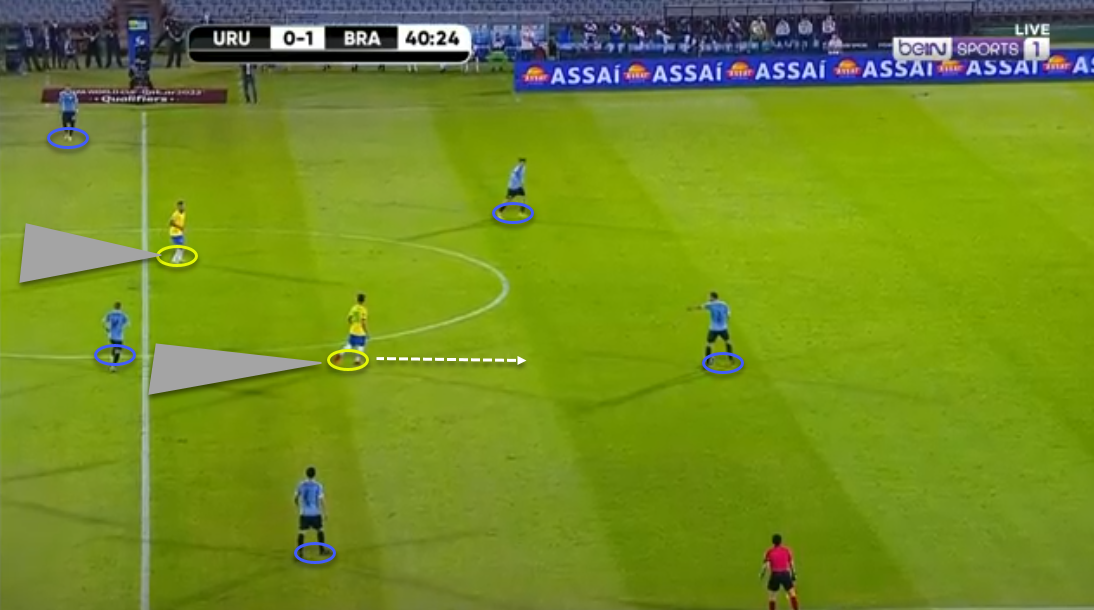 Tabárez made two substitutions to try to change the game’s course, but their possession problem remained the same. Mauro Arambarri entered in Bentancur position, and Torreira gave place to a more attacking-minded winger in Brian Rodríguez. With Arambarri-Nández playing centrally, Uruguay played in a 4-2-2-2. Their lack of players positioned in the central pocket remained unchanged. The new double-pivot played even flatter, and both wingers stayed wide. In the next picture, we can see Uruguay’s shape with no player positioned between the lines. 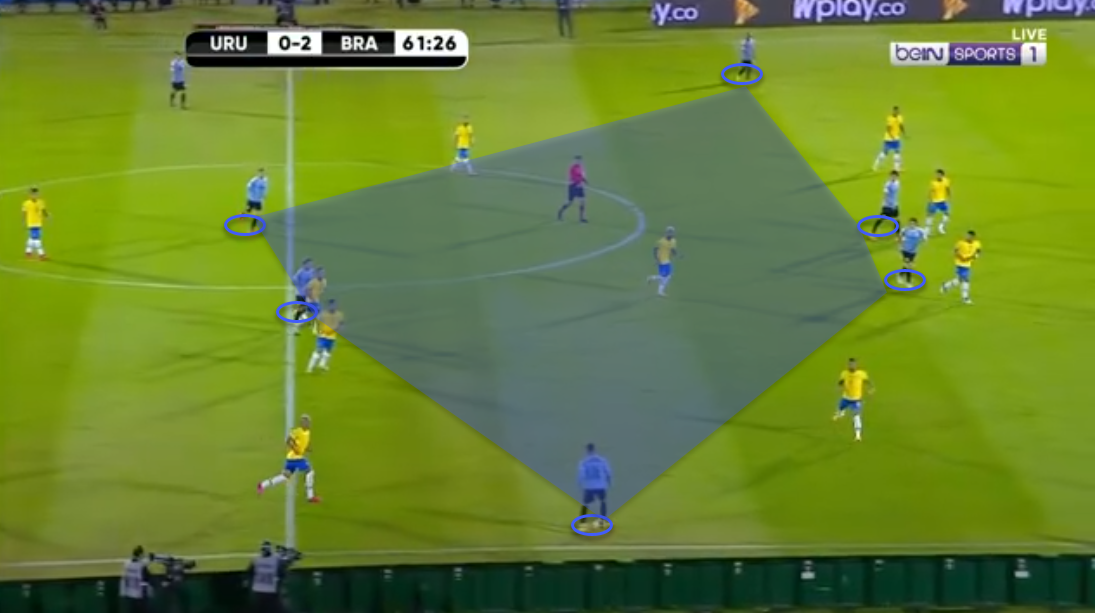 Brazil ended up winning this game without making too much effort. They only needed some tactical shifts in their build-ups to skip Uruguay press and progress the ball to the final third. They had a great start, winning four of four games. Earing six points with the absents they had is a good thing for Tite, albeit they have to look for ways of creating more scoring opportunities without being too dependent on PSG star.

On the other side, Uruguay kept its bad record against Brazil, losing again. When opponents retreat or allow this team to keep the ball, they find it too hard to create scoring opportunities. Being too dependent on the creativity and attacking prowess of Suárez and Cavani. With these last two ageing, Tabárez needs to find better ways to create chances and not depend too much on the counter-attacks or set-pieces.