Uruguay’s ability to punch above its weight and continue producing an obscene number of top footballers is well documented. In recent years this trend hasn’t slowed up, with good performances at the last three additions of the U20 World Cup. What’s more, the 2017 crop won the Sudamericano for the first time in 36 years and the likes of Federico Valverde and Rodrigo Bentancur have already made the jump to the senior team.

The stability at national team level under Oscar Tabarez has been instrumental at forming a strong bond between the young players and the senior team, creating an early and lasting connection to their impressive footballing history, before economic realities see them move abroad at an increasingly young age.

And it doesn’t look like the well of talent is going to dry up any time soon. Nacional U20s recently won the U20 Libertadores but, for the purposes of the list, standout players like Thiago Vecino, Guillermo May and Brian Ocampo (all born ’99) just miss the cut, as does Defensor Sporting’s exciting Juan Manuel Boselli.

Nevertheless, there is still plenty of exciting prospects in the class of 2000 and below is a selection of some of the most exciting Uruguayan talents born after the millennium.

The versatile midfielder is yet to make his debut for Nacional but has already agreed to join Spanish giants Atletico Madrid. Monitored by Europe’s elite for some time, Sanabria also had a 10-day trial with Liverpool in 2015 and was one of the standout players for the Uruguay U17s at last year’s Sudamericano.

The accolades have continued to pour in after he was an ever-present in Nacional’s U20 Copa Libertadores win this February. With his wand of a left foot, Sanabria tends to feature on the wing where he can utilise his excellent acceleration, close control and crossing. 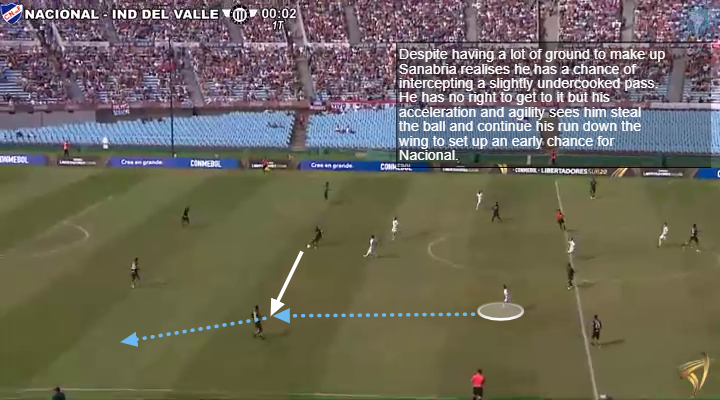 However, despite his slight frame, he doesn’t mind get stuck in and making challenges. Coupled with his impressive passing range, this allows Sanabria to also operate comfortably in a more withdrawn central midfield role. 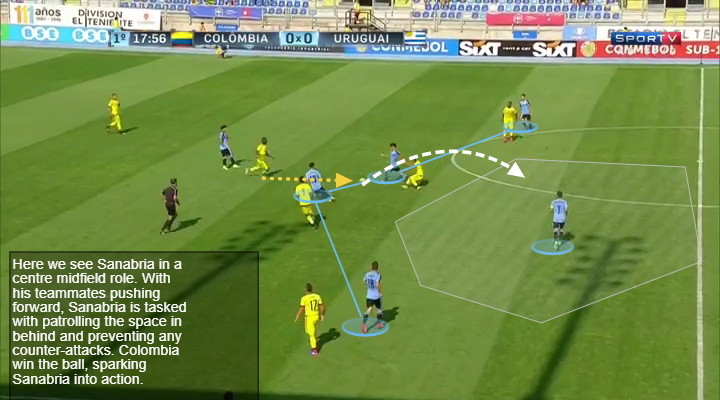 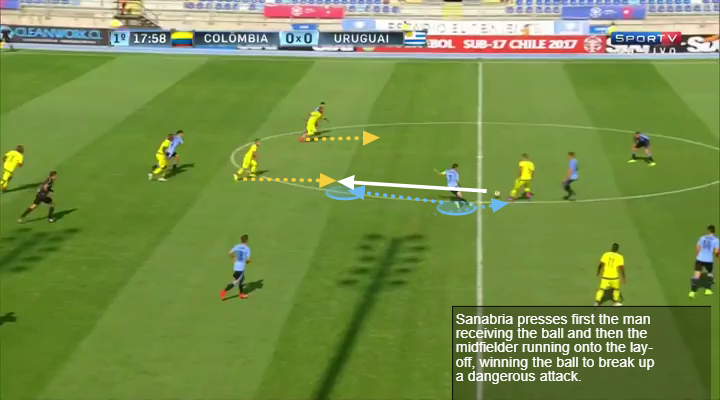 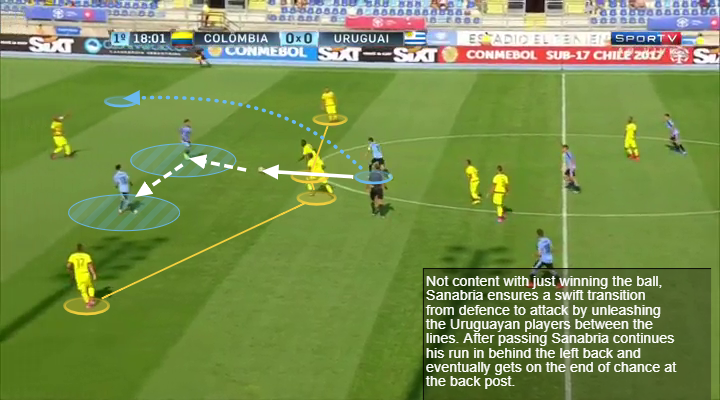 With Uruguay’s shift to a more technical midfield featuring Valverde, Torreira and Bentancur, this bodes well for Sanabria who is cut from the same cloth and would fit right in. For the time being, he is likely to be a key piece for the Uruguay U20s but is certainly someone who has been earmarked as a future senior international.

Defensor Sporting have a fantastic reputation for producing young talent and, even by their own lofty standards, La Violeta are currently going through a real purple patch. Maxi Gomez and Giorgian de Arrascaeta are two of the most notable recent graduates and the likes of Carlos Benavidez, Mathias Suarez and Juan Manuel Boselli are all former U20 internationals.

Younger still is hot-shot striker Facundo Milan, who burst onto the scene last year when he scored a match-winning brace on his debut against Plaza Colonia at the age of just 16. Now 17, Milan has been handed the number nine shirt as Defensor look to youth to replace the goals of Maxi Gomez and Gonzalo Carneiro.

A powerful and fearless centre forward, Milan has that knack of finding space inside the penalty box. This is backed up by his record of 115 goals at youth level for Defensor, while his physique allows him to act as the focal point of the attack and his heading makes him dangerous in the air too. 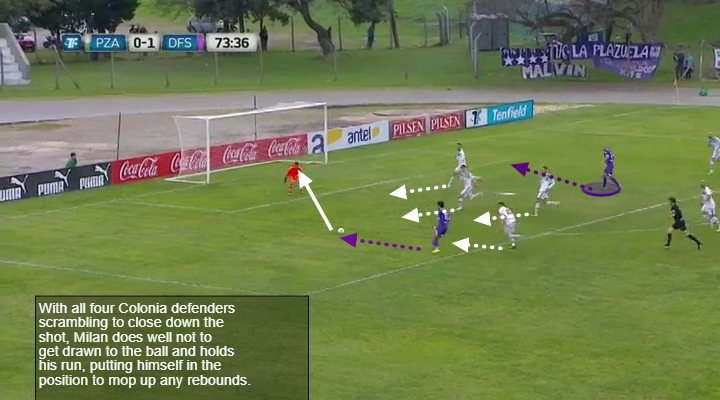 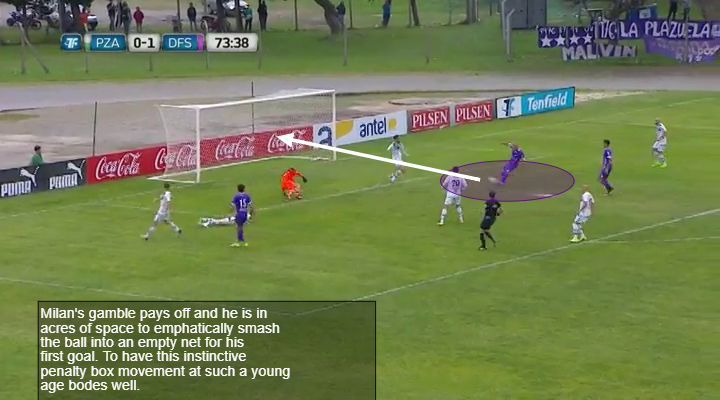 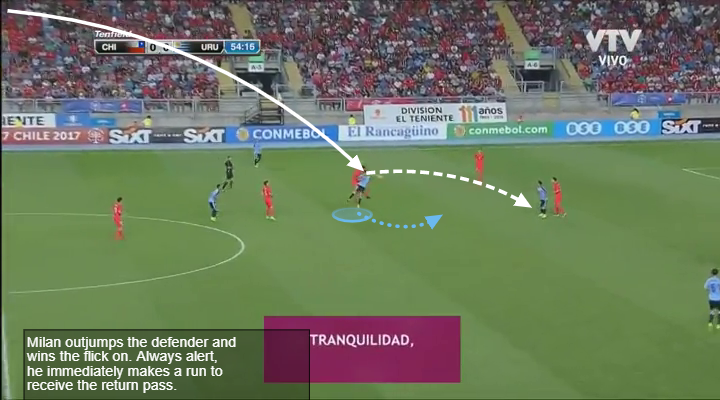 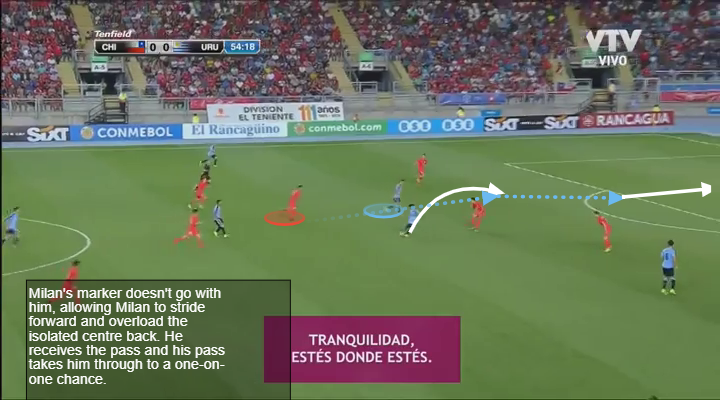 Along with prospects Emiliano Gomez and Gonzalo Napoli, it seems like the Defensor production line isn’t going to stop anytime soon and it will be fascinating to see how Milan deals with the increased responsibility and expectation this year.

Another player who has already made his bow at senior level is Liverpool de Montevideo’s Gustavo Viera. The 17-year-old, who primarily plays as a wide forward, made 8 appearances in the league last year and even got his first taste of continental football, with two brief cameos in the Copa Sudamericana tie versus Fluminense.

Capped at U17 level for Uruguay, Viera has also been named as one to watch in articles by France Football and The Guardian. His explosive power, directness and searing pace immediately catch the eye and his talent, although still very raw, is there for all to see. 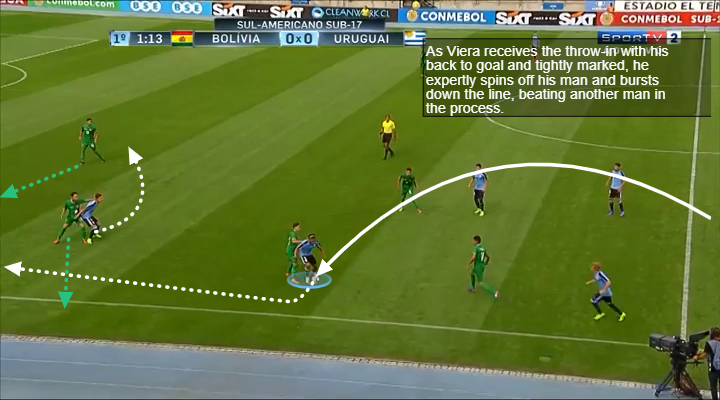 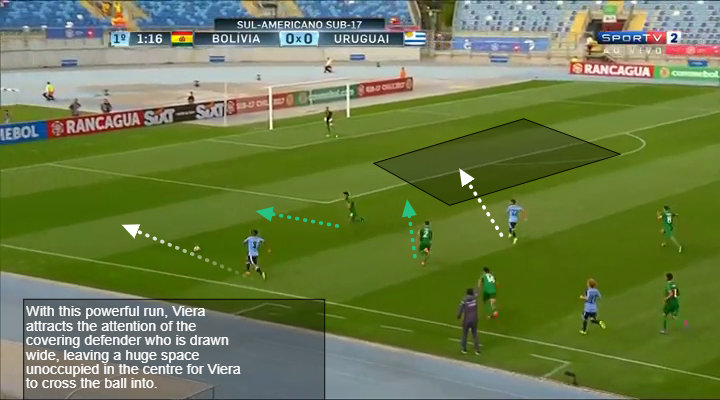 Viera has also shown his potency in front of goal at youth level and he likes to drift infield from the flank to get into goal-scoring positions. It certainly wouldn’t be out of the question if he ended up as an out-and-out forward in the future. 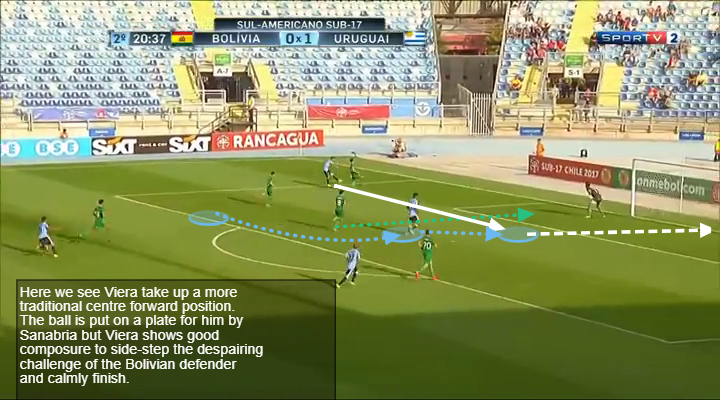 Judging a player at this age is notoriously difficult and Viera must work hard to make sure he doesn’t just rely on the physical advantage he enjoyed so far at youth level. If he stays grounded and works on his game, he could be a special player indeed.

Perhaps one of the less heralded names on the list, Jose Neris has gone more under the radar at River Plate de Montevideo than some of the prospects at larger clubs. Nevertheless, the midfielder has already made 13 senior appearances, albeit largely off the bench, has been capped for Uruguay at U17 level and starred in the U20 Libertadores.

Usually deployed on the right wing, Neris likes to play little combinations to use his powerful running and dogged dribbling to get in behind defences. 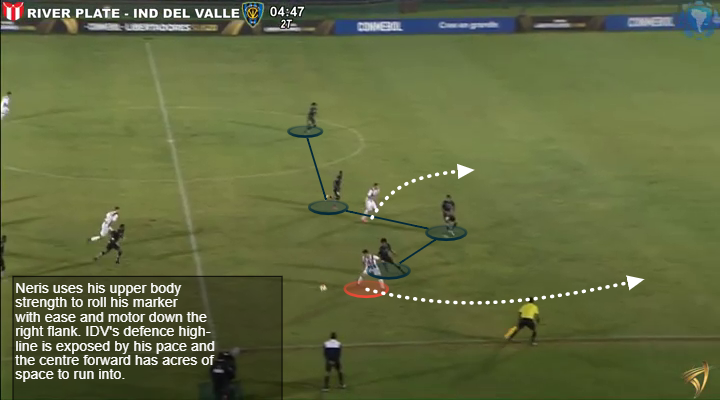 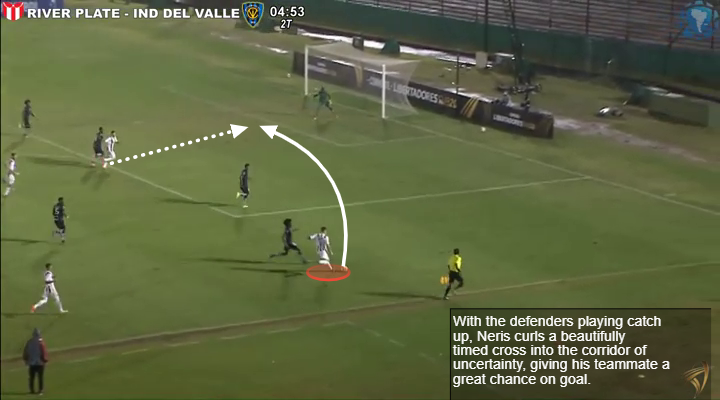 He is also taller than your average wide man and his height, leap and upper body strength make him a dangerous aerial threat at the back post, as demonstrated in the example below. 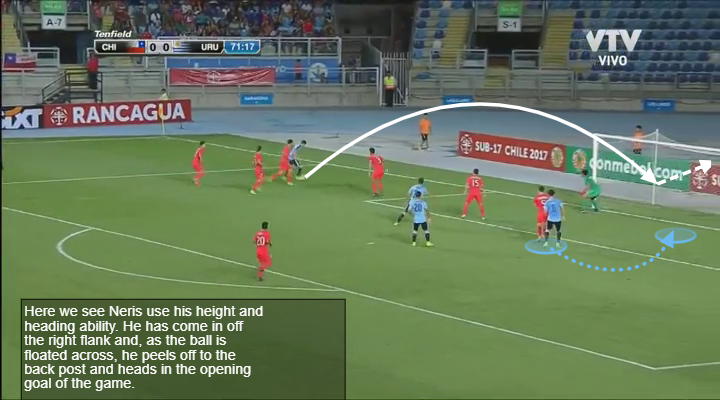 The fact that Neris is already getting Primera experience should put him in good stead for a place in Fabian Coito’s U20 squad for next year’s Sudamericano in Chile, along with teammates Joaquin Fernandez and Facundo Vigo.

Although yet to feature for the first team, Penarol striker Facundo Torres has a ferocious record at youth level and it seems only a matter of time before he makes his debut. He scored 5 goals in as many games for Uruguay U15s at the Sudamericano in 2015 and has scored 11 in 24 for the U17s too.

Torres is a versatile forward who can lead the line, play just off the front man in a support role, or even has a number 10. A sharp finisher blessed with excellent technique, he is an intelligent player who can just as easily turn provider and former coach Robert Lima also highlighted his great tactical understanding, comparing him to Carlos ‘Pato’ Aguilera. 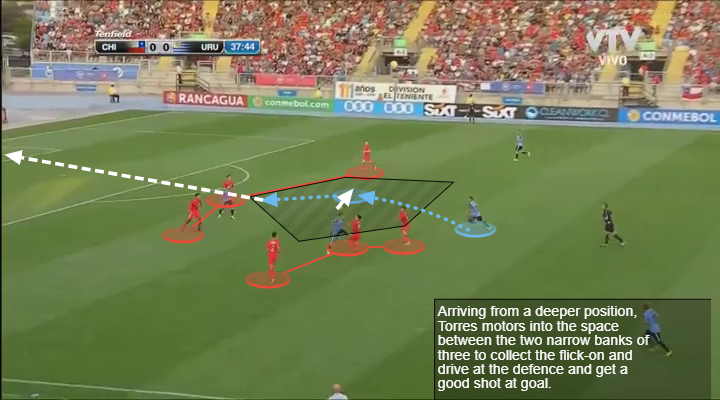 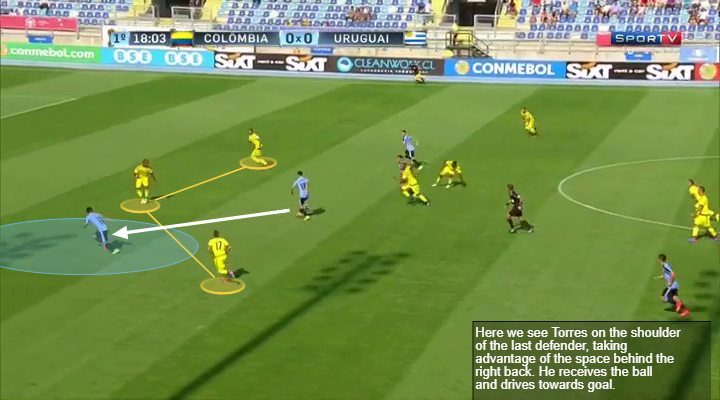 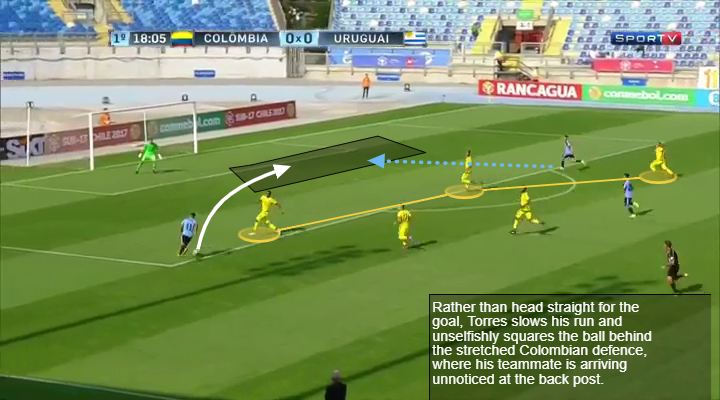 While it may be a bit more difficult to break into such a strong first team challenging for the title like Penarol, Torres is highly thought of at the club and will be one to keep tabs on, as well as fellow young forward Brian Rodriguez.