Week two of the 2022 FIFA World Cup qualification (CONMEBOL) featured the clash between Peru and Brazil. The Peruvians arrived at this game after winning one point through a late equalizer against Paraguay. Brazil flexed its power in an outstanding victory 5 – 0 against Bolivia. Tite’s squad showed the attacking prowess of its team again, even though Peru managed to be twice ahead in the score with two goals from out of the box.

This tactical analysis will look into Brazil’s tactics to create scoring opportunities from their build-up. This analysis would also show how Ricardo Gareca read Brazil’s strategy and counter it by shifting its formation defensively. Finally, we would explore this Brazilian team’s strengths full of playmakers, who ended up with a 3.56 xG. 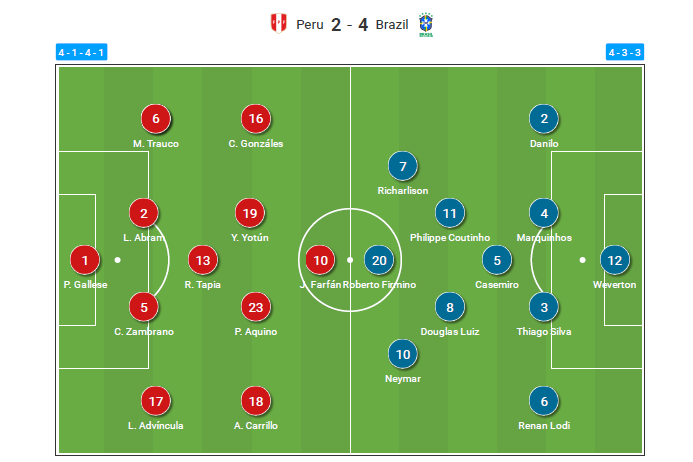 Ricardo Gareca kept its 4-1-4-1 formation, making two substitutions from the last game against Paraguay. The back four remained the same as the previous game, with Renato Tapia playing in front of the defensive line as the lone pivot. Christofer Gonzales replaced Christian Cuevas in the left midfield. Upfront, Jefferson Farfán took the starting position as the lone striker instead of Raúl Ruidíaz.

Tite repeated the 4-3-3 formation with only one change from the victory against Bolivia in Brazil. Weverton re-started as the keeper. Rodrigo Caio early replaced Marquinhos due to an injury pairing Thiago Silva as centre-backs. Brazil repeated the middle trio with Douglas Luiz, Casemiro, and Philippe Coutinho. Tite’s only change was Richarlison as right-wing, replacing Éverton Soares. Paris Saint-German star Neymar and Roberto Firmino completed the front line.

Brazil dominated the majority of the first half with 68% of ball possession. The build-up was instrumental in this dominance, giving them goal scoring opportunities from the back. When playing the ball from the back, Luiz dropped deep in the left flank, taking the full-back position as shown in the next picture. This tactic allowed Brazil to progress the ball through Peru 4-4-2 press. Brazil used either Luiz in the left or Casimiro as a pivot when André Carrillo pressed higher to advance the ball. 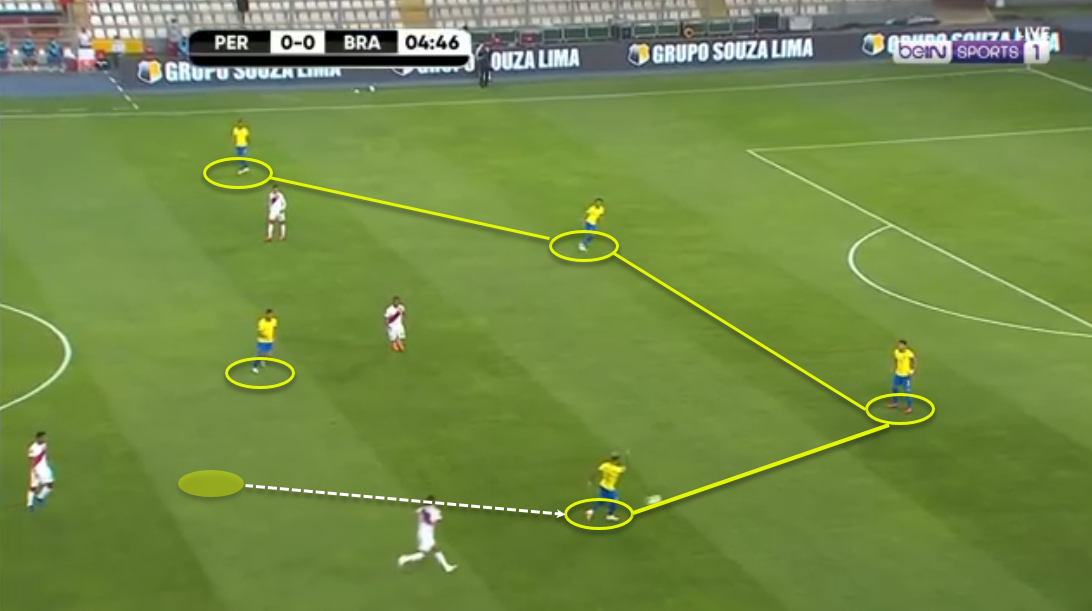 This shape in the build-up gave Brazil dominance in the front line creating a 4-1-2-3 offensive formation. Neymar dropped in, allowing Renan Lodi to join the front line. Richarlison stayed higher on the right flank. Coutinho advanced positioning in the right half-space as an advanced-midfielder. With Coutinho and Neymar positioned deep in the half-spaces, Firmino did not have space to play as a false nine as he is used to when playing for Liverpool. Against a back four, Brazil outnumbered Peru’s defensive line with these five players, as we can see in the next picture. 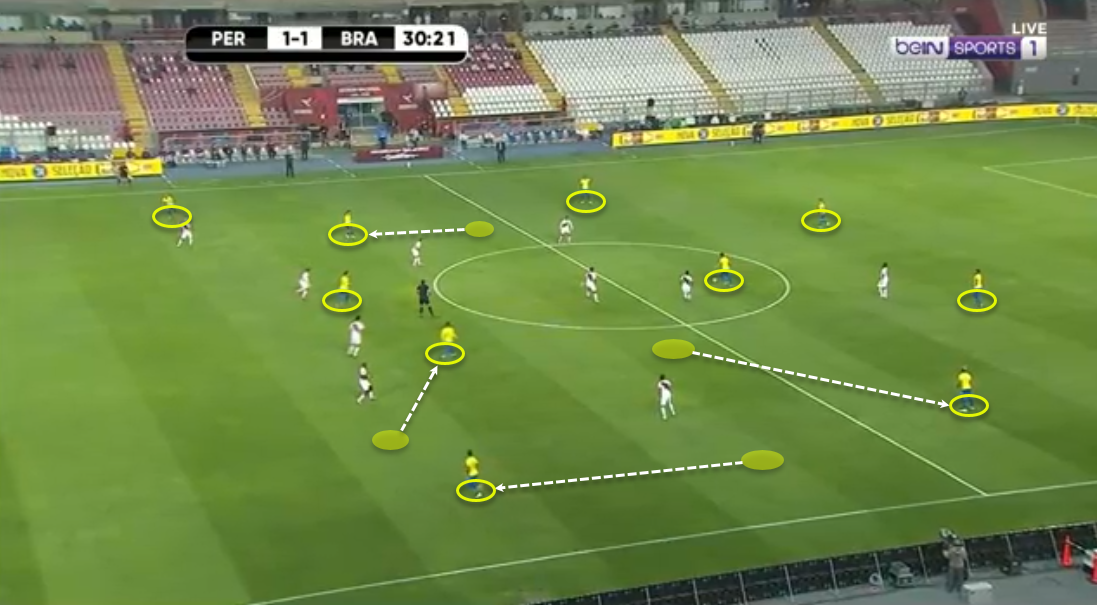 In the first half, we saw Brazil using the quality superiority of Richarlison in the right flank, most of the time being on 1v1 situations. With either Casimiro or Luiz in possession in the build-up, Brazil exploited their long pass range attributes connecting the right-winger. At times Firmino’s freedom gave Brazil a numerical superiority on the same side. His position depicted in the following shot created an asymmetric shape in Brazil’s front line. This shape generated an overload, asking a question to Peru’s centre-back and full-back; should they track the striker, either Coutinho or Richarlison will be left free. 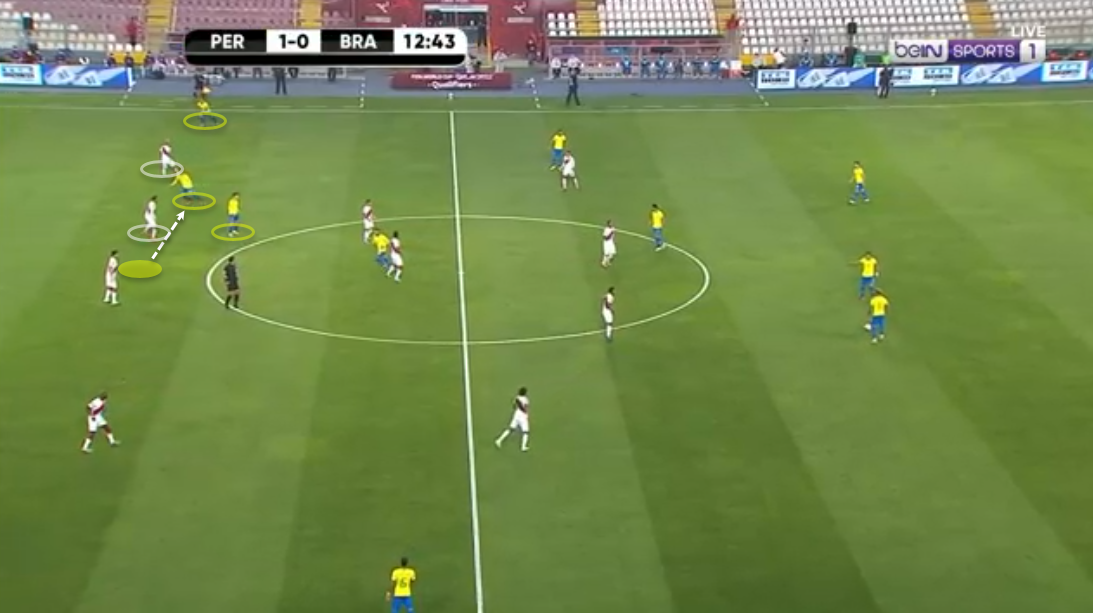 Even though Brazil preferred attacking Peru by the aforementioned direct attacks through the right flank, it also created some left side opportunities. This left flank was exploited by a more positional play, progressing the ball behind Peru’s pressing lines. Here again, Luiz played an instrumental role, and his quality to dribble the ball gave Brazil another option when in possession. In the next picture, Luiz collected the ball behind Peru’s midfield line, advancing to create a 2v1 in the left flank. Without the likes of Marcelo and Dani Alves, Brazil found in Richarlison in the right, and Luiz-Lodi’s combination in the left a way to exploit the wide channels. 62% of Brazil attacks were through the flanks. 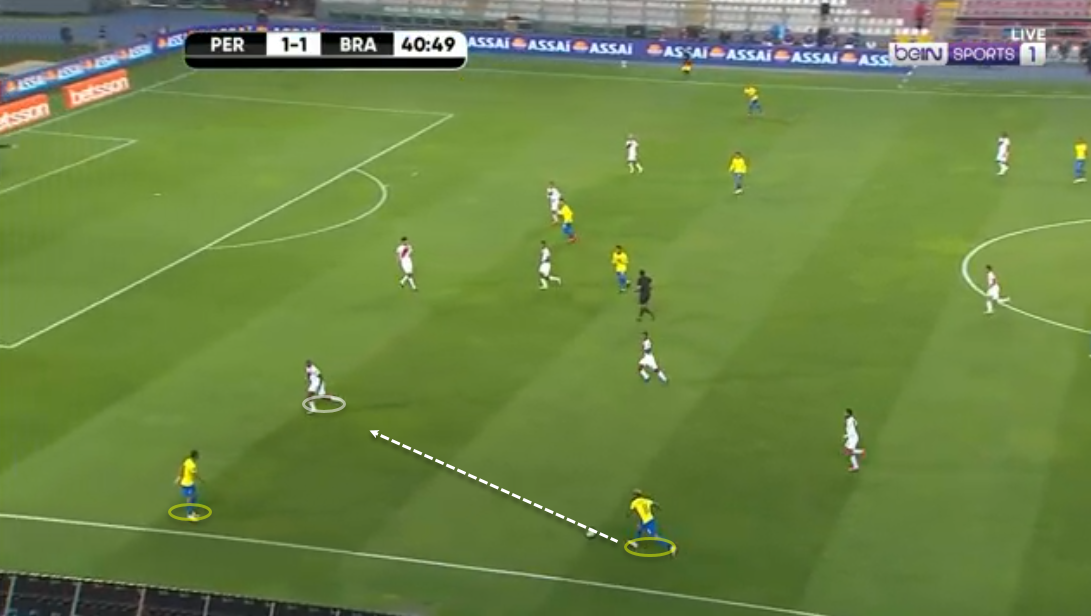 Peru started the first half positioned 4-4-2 defensively, with Renato Tapia joining the midfield line and Yoshimar Yotún advancing to press higher as analyzed before Brazil 4-1-2-3 offensive formation outplayed Peru defensive line. We can see in the next shot that each defensive player is man-marking one Brazilian. Considering the quality of Neymar, Coutinho, Richarlison, and Firmino, being man-on-man against them was a significant problem. To make it even more challenging, Lodi’s participation in the final third created a numerical superiority with only four Peruvians to defend five players on the defensive right side. 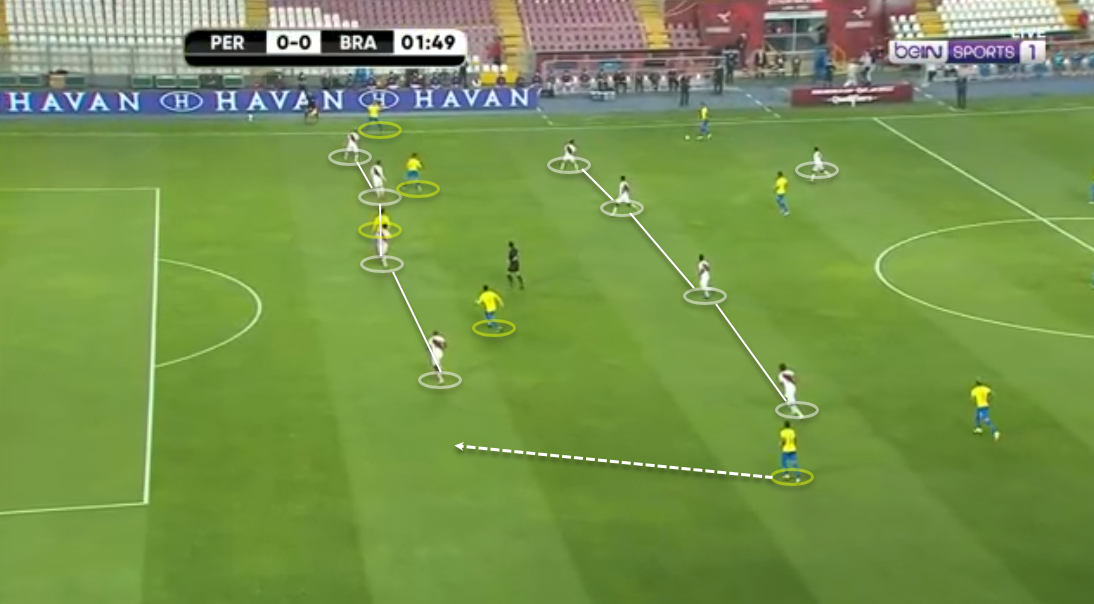 Gareca read on-time this offensive prowess of the Brazilian tactics and shifted when defending into a 5-4-1, as shown in the next snapshot. Carrillo withdrew as a wing-back creating a back-five line. Carlos Zambrano played as a libero giving cover to Luis Advíncula and Luis Abram. This last two man-marked the strong-side Brazilian playmakers, either Coutinho or Neymar. On the weak-side, the other half-back was in charge of following Firmino. These defensive tactics gave Peru a higher control, nullifying the Brazilian front line only allowing a 0.26 xG in the first half without considering the penalty. 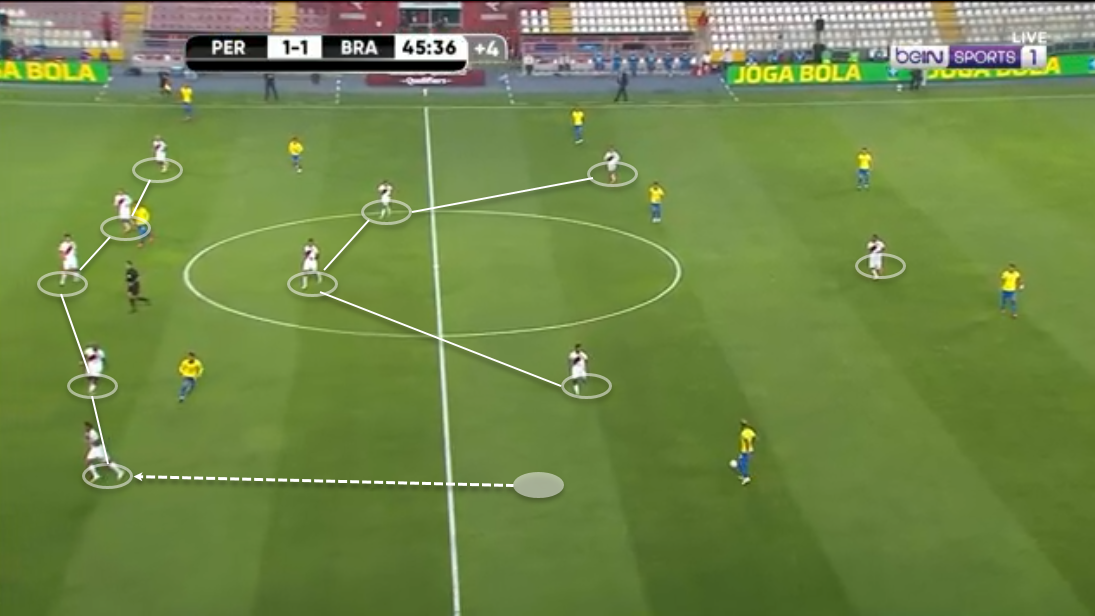 For the second half, Gareca also changed Peru pressing tactics to counter Brazil’s build-up. Brazil easily outplayed Peru 4-4-2 pressing shape. So Peru shifted to the starting 4-1-4-1 formation when pressing. When Brazil was building-up on the left side, Pedro Aquino took a higher position pressing Luiz, and Yotun dropped deep to man-mark Casimiro. Carrillo stayed deeper cutting off any forward passing options. Through this strategy, Casemiro was not allowed any more freedom. At the same time, Aquino received the cover of Carrillo when pressing. This pressing strategy reduced Luiz’s time to play direct balls or progress the ball through the flank, nullifying Brazil’s strengths. 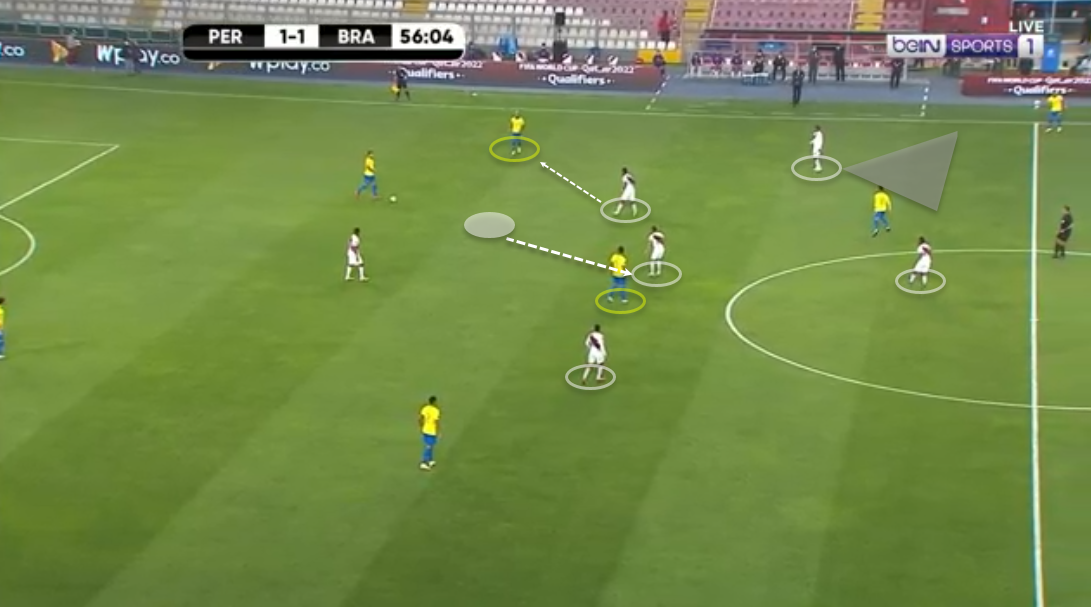 Playing against Brazil brings constant threats to the opposition. We have mentioned before the quality players that Brazil accounts for in their starting eleven. This quality superiority added to Tite’s tactics to give Brazilian playmakers opportunities to receive with time and space is a significant problem for any squad versing this team. Next, we will analyze how Brazil tactics created space for their playmakers to progress the ball to the final third.

When Carrillo did not manage to drop fast enough to the backline, either Coutinho or Neymar found space between the lines to receive the ball with time and space. Richarlison and Lodi pinned the full-backs, and Firmino did the same with both centre-backs, as shown in the next picture. Both Brazilian playmakers outnumbered Peru lone holding midfielder in this situation. Silva played a long ball to Lodi, who laid it off to Neymar, collecting the ball free in the final third. 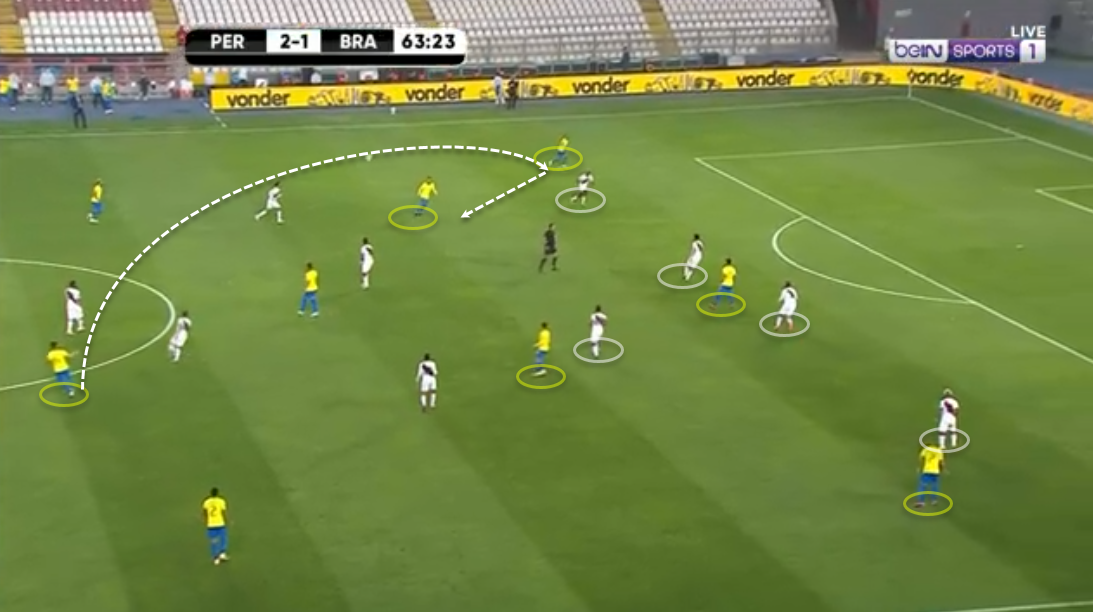 In a few plays, Firmino’s role was similar to what we see at the Premier League, dropping deep as a false nine. This tactic allowed Neymar to take a higher position. With this rotation, Brazil was allowed to create chaos in Peru’s defensive shape. In the next picture, we can see that this rotation forced Peru defensive line to stayed deep. Neymar committed two defenders in this rotation, with Advíncula tracking his run. This rotation left Firmino in the playmaker role. Firmino prowess to play with the back to goal connected with ease with the left-back, who progressed the ball to the final third. 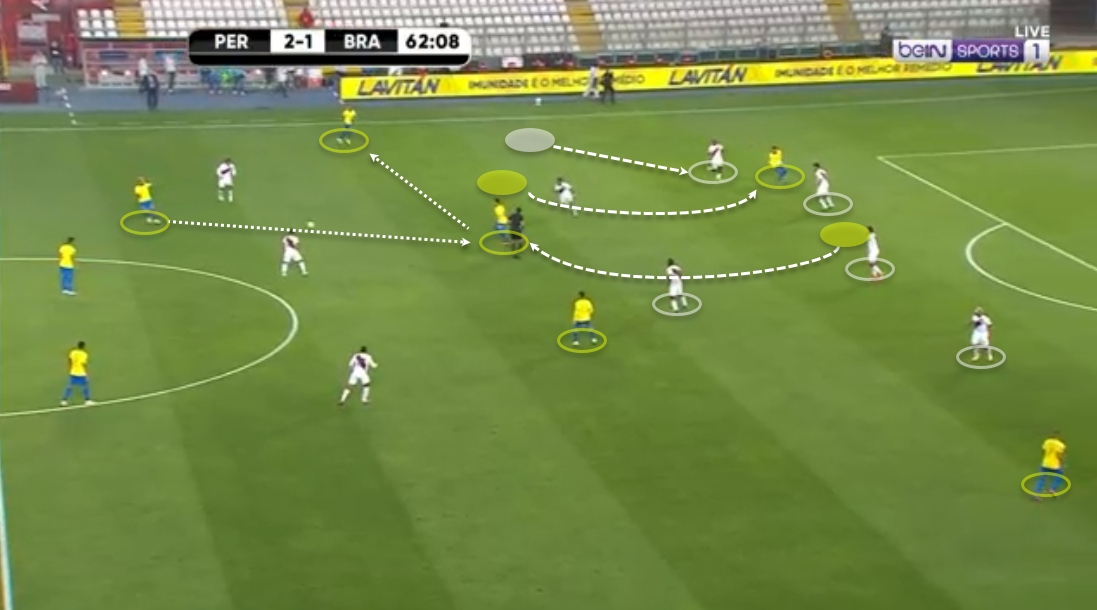 Even though Brazil had the possession of the ball and create its chances on goal, Peru managed to stay level until the last ten minutes. Gareca’s defensive shifts kept Brazil’s strengths out of tune for the second half. Neymar’s performance was decisive in the game scoring three goals, two by penalty shoots. He became the second goal scorer of the National Team, passing the historic Ronaldo, just staying below Pele.

Brazil had a head start this 2022 FIFA World Cup qualifiers with 6 points and 9 goals. Peru did a great job defensively nullifying Brazilian strengths, albeit conceding two penalties allowed Brazil to earn the three points. Peru keeps showing effective tactics when in and out of possession under the Argentinian coach, even though they only got one point in this first two games. 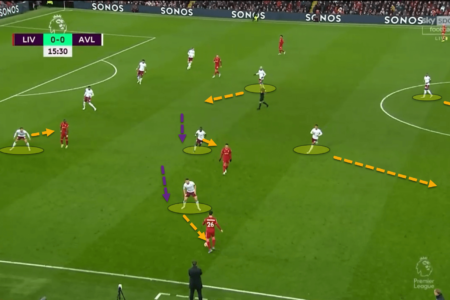 Following a memorable 1-0 victory against Manchester United at Old Trafford at the end of September, Aston Villa were sitting just […] 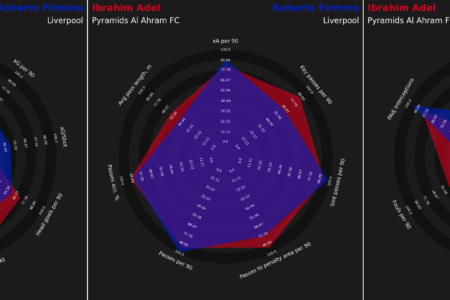 With AFCON 2021 starting in a few days, lots of clubs in Europe are starting to lose their best players. […] 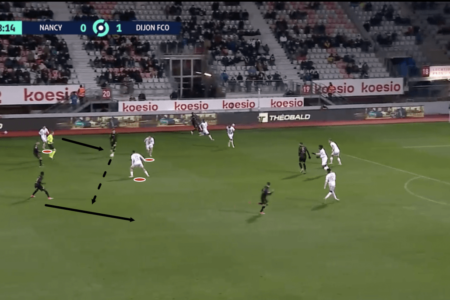 Over the last few seasons, Nancy had been making steady progress in Ligue 2. They managed a 17th place finish […]