A goalkeeper’s peak has been a highly debated topic in the football world. Nowadays, goalkeepers can carry on performing at the highest level right into their mid-thirties. This means that a goalkeeper’s peak lasts a lot longer than an outfield player’s. 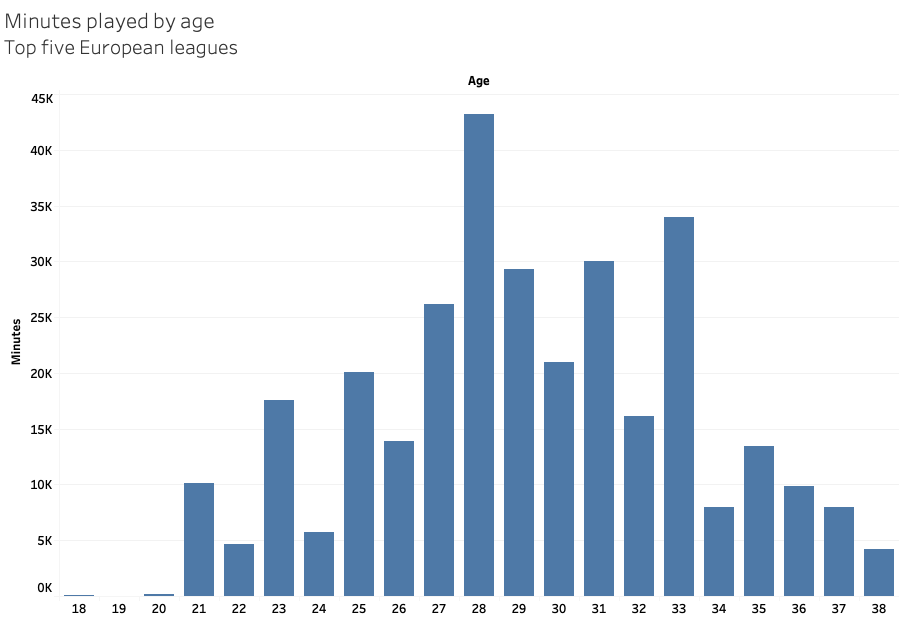 The graph above shows us the total minutes played by different ages. 28-year-olds clearly play the most, with over 43,000 minutes played, followed by 33-year-olds who played a total of over 34,000 minutes. We can see that before the age of 27 and after the age of 33, the number of minutes begins to fall. Therefore, the age range of a goalkeeper’s peak being between 27 and 34 is very reasonable.

We can see that players from in the ‘peak’ group play the most minutes, with 135,594 more minutes than the those under 26. Interestingly, keeper’s playtime seems to drop off after they turn 34. Whereas goalkeepers below 26 are beginning to get more playtime.

So we’ve shown that statistics prove that goalkeepers between the ages of 27 and 34 play the most, but are these players also performing the best?

The best goalkeepers in their peak

Stopping goals is the number one job of a goalkeeper. In this section, we will measure how well goalkeepers in their peak prevent goals and save shots that they sometimes aren’t expected to. The colour of the marks in the graphs below show each keeper’s age. 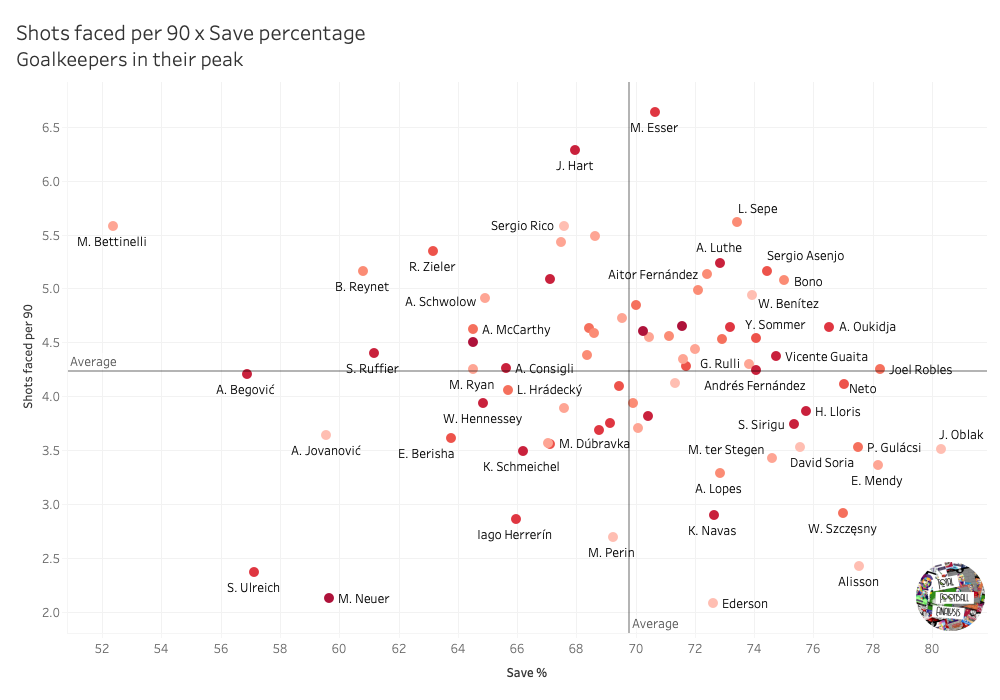 The above graph compares each goalkeeper’s shots faced per 90 and save percentage. It gives us a clear view of the quality of each keeper’s team and how many shots faced, do they save.

Atlético Madrid’s Jan Oblak has the highest save percentage with 80.29%, however, he plays behind one of the best defences in Europe, only facing 3.51 shots per 90. The best performing goalkeepers here are positioned in the top right quadrant.

Metz’s Alexandre Oukidja shows up very well here. Although his team didn’t have the most successful of seasons, the 32-year-old stood out. He faces an above-average amount of shots per 90 with 4.64 and saves 76.52% of these.

Villarreal’s Sergio Asenjo faces an above-average amount of shots per 90 with 5.16. The Spaniard saves 74.43% of these. Sevilla’s Yassine Bounou, also known as Bono, has very similar stars to Asenjo. He faces just over five shots per 90 and saves exactly 75% of them.

Nice’s Walter Benítez, Union Berlin’s Andreas Luthe and Mönchengladbach’s Yann Sommer all have very good stats in both areas too. All three face an above-average amount of shots per 90 and save above 69.77% of them. 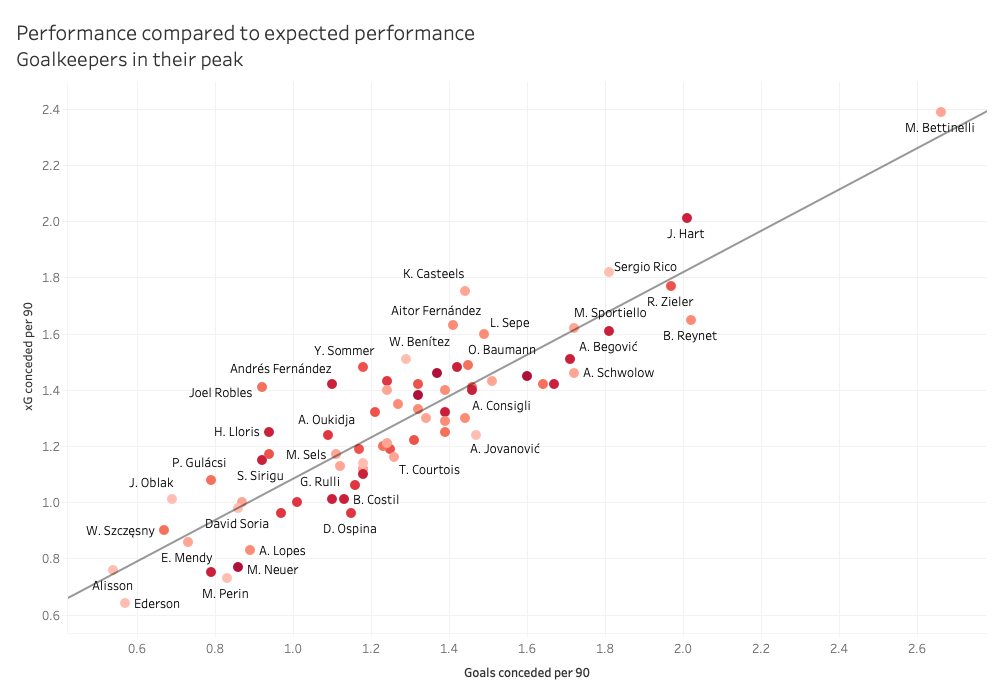 Keepers towards to bottom left of the graph play for teams with good defences, whereas those towards to top right, have weaker defences. Koen Casteels of Wolfsburg instantly stands out. He appears in the middle of the graph and high above the trend line. The Belgian was expected to concede 1.75 goals per 90 but only let 1.44 in.

Levante’s Aitor Fernández appears just below Casteels. As a result of the shots he faced, the Spaniard was expected to concede 1.63 goals per 90, but due to his outstanding season, he only conceded 1.41.

Joel Robles and Sommer also appear very high above the trend line. Real Betis’ Robles conceded just 0.92 goals per 90 during the 2019/20 season, but he was expected to concede 1.41, showing just how well he was performing. Whilst Sommer hasn’t been as impressive, he still performed better than expected. The Swiss international conceded just 1.18 goals per 90, he was expected to concede 1.48.

In terms of goalkeepers for more elite teams, Oblak, Peter Gulácsi, Hugo Lloris and Wojciech Szczęsny all have good stats in this area of goalkeeping. 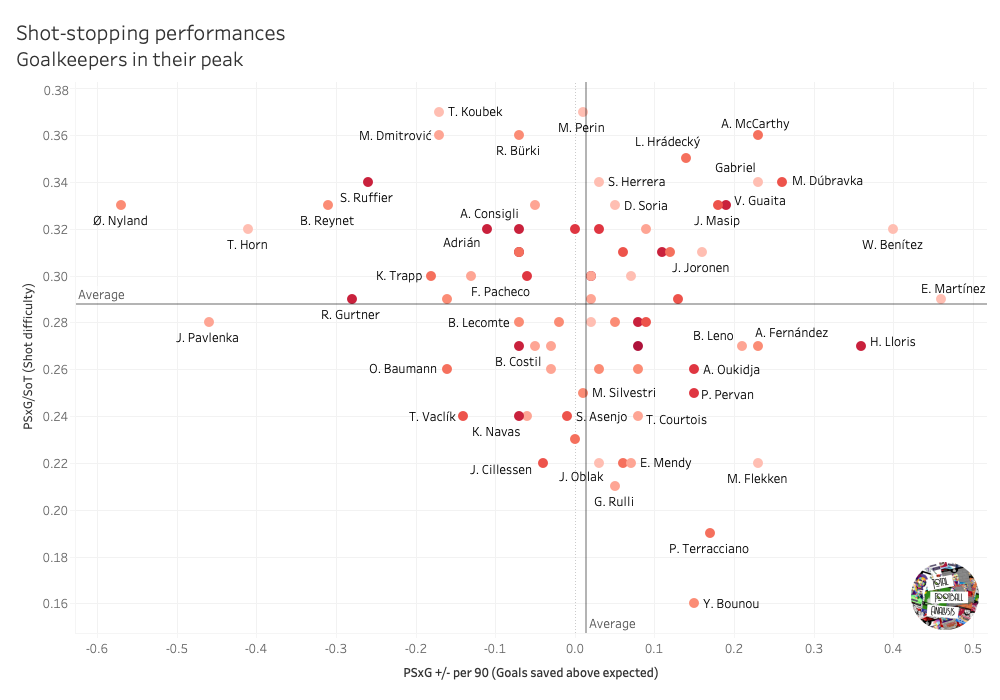 The above graph looks at more advanced data. It looks at the difficulty of shots faced and their likeness to save these shots.

Aston Villa’s new signing Emiliano Martínez stands out the most as he has the highest PS xG +/- per 90 value of 0.46. He prevented a lot of goals during the last season, and he did so facing a higher than average shot difficulty (0.29). Close to Martínez on the graph is Benítez. He saved 0.4 goals per 90, with a PS xG /SoT value of 0.32.

Tottenham’s Lloris also impresses. Although he faced below-average shot difficulty (0.27) he did prevent 0.36 goals per 90. The French captain has had a mixed season, filled with his usual silly mistakes, but world-class saves too.

Another Premier League goalkeeper with good stats here is Newcastle’s Martin Dúbravka. During the 2019/20 season, he faced very difficult shots (0.34) but still managed to return a positive PS xG +/- value of 0.26 per 90, showing how important he was to the Newcastle team.

Other goalkeepers that stand out are La Liga duo David Soria and Jordi Masip, along with Crystal Palace’s Vicente Guaita. 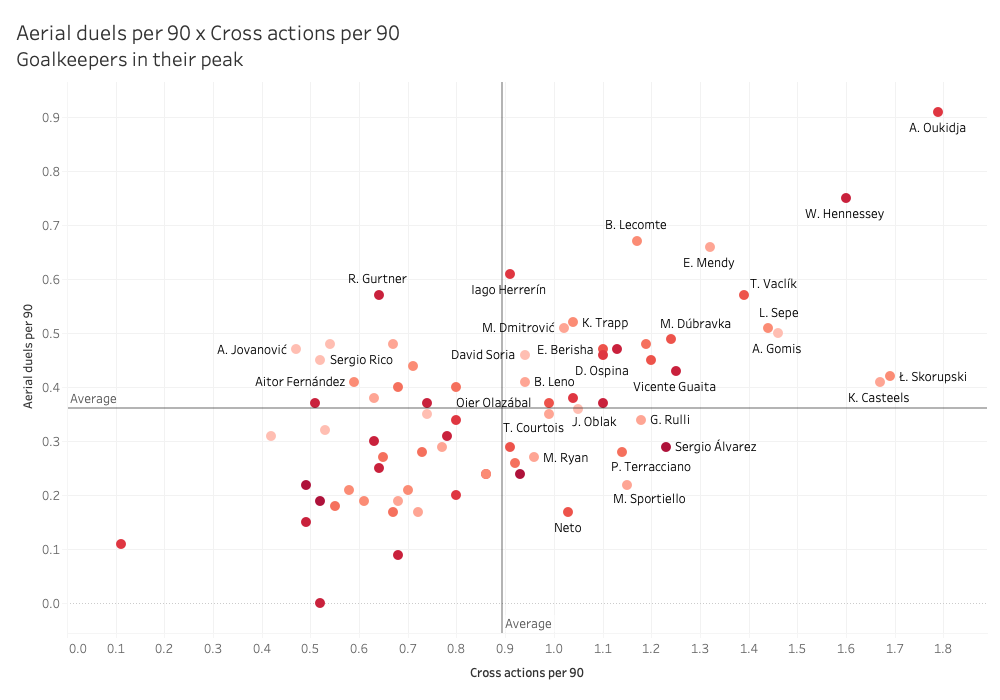 This graph looks at the ways each goalkeeper deals with crosses. Aerial duels focus on actions in the air, whereas cross actions include punches and claims per 90.

Previously mentioned Oukidja stands out with the highest stat in both areas. He’s involved in 0.91 aerial duels and 1.79 cross actions per 90. Evidently, he is very confident off his line within the confinement of his box.

Next best is Crystal Palace’s Wayne Hennessey. The Welsh international clearly likes to use his 6’6 height to take action against crosses within his box. The 33-year-old makes 1.6 cross actions per 90, whilst making 0.75aerial duels.

Other goalkeepers also impress but are not outliners for either stat. Chelsea’s Edouard Mendy along with Sevilla’s Tomáš Vaclík and Parma’s Luigi Sepe all have very well-rounded stats. 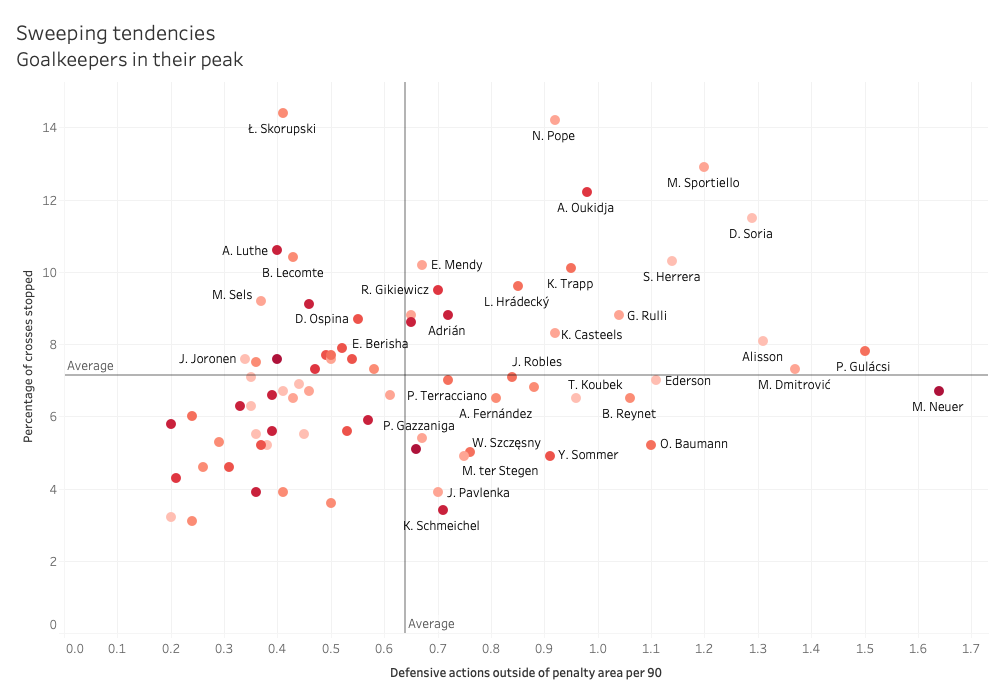 This graph uses more in-depth stats to determine the best ‘sweeper-keepers’ in their peak. We look at the percentage of crosses stopped and the number of defensive actions out of their penalty area per 90 minutes.

Unsurprisingly, Manuel Neuer leads the way in number of defensive actions outside the penalty area. He makes 1.64 per 90, a lot more than the second-best Gulácsi who has 1.5. However, Neuer isn’t very active off his line, only stopping 6.7% of crosses he’s faced.

Skorupski and Burnley’s Nick Pope have the highest percentage of crosses stopped with 14.4% and 14.2% respectively. However, only Pope has higher-than-average defensive actions outside of the box number with 0.92 per 90.

After looking at the numerous different areas of goalkeeping, and comparing each goalkeepers stats, we can now create a shortlist of interesting goalkeepers who could be explored further. Using a combination of stats and goalkeepers early in their peak, we have made a three-man shortlist.

David Soria enjoyed a great 2019/20 season with Getafe. He and his team surprised the league with their unique tactics and under-the-radar performances. His only weakness is his kicking, as he doesn’t have a tendency to pass short. However, his shot-stopping and sweeping make him one of the best goalkeepers early on in their peak.

Yann Sommer is the oldest player in our shortlist at 31-years-old. He too enjoyed a surprisingly good season with Borussia Mönchengladbach. His performances in goal helped his team to a fourth-place finish in the Bundesliga, getting them to the Champions League. Sommer does make the odd mistake, but he has excellent reflexes and shot-stopping abilities.

Jan Oblak is the final player we will analyse further. Any discussion about the best goalkeepers in the world must include Oblak. He has been criticised by some critics because he plays behind such a good defence. However, many people forget that Oblak is only 27-years-old, he is only just hitting his peak and will continue to get better.