Although Stephen Kenny’s Ireland has now gone four games (6.5 hours) without finding the back of the net, it is a testament to his coaching that the Irish players still look an improving side in and out of possession from game to game. Perhaps a frustrating statistic, the boys in green have had a superior xG in each of their last three games they have failed to score, let alone, win.

The final score of the UEFA Nations League Group H clash reflected Finland 1-0 Ireland, yet the xG rating had both sides at 1.27 to 1.33 respectively. Finland also looks an improving side under Markku Kanerva, grinding out results with attractive football and showing an ability to adapt for more formidable opposition.

It was a result dictated by both goalkeepers, Ireland’s Darren Randolph made a passing error playing out from the back which gifted Finland their goal. At the same time, Finland’s Lukáš Hrádecký made some crucial saves in the second half to maintain his sides clean sheet on the way to victory.

The tactical analysis below covers the most prominent aspects of both managers tactics, as well as key talking points across the 90+ minutes. Also, with the support of key data, our analysis highlights where both sides succeeded and where they may find the opportunity to improve. 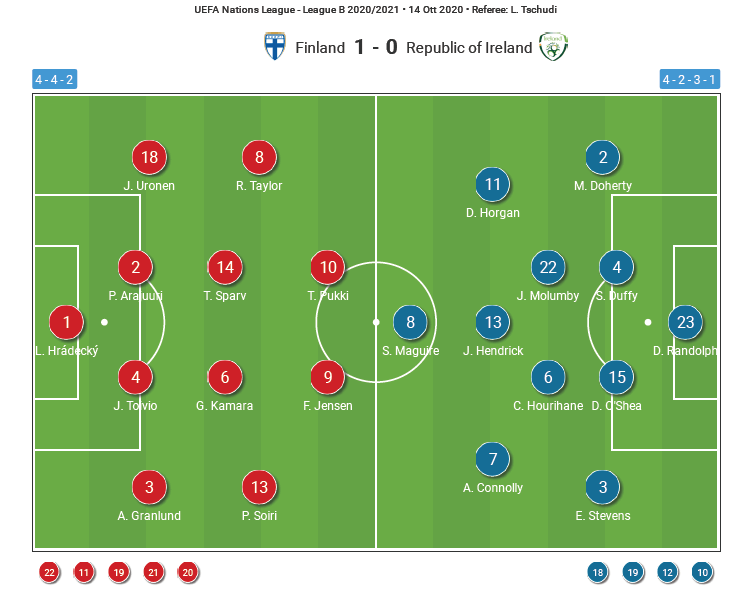 Finland: 4-4-2
Kanerva makes three changes to the side that beat Bulgaria this past week. In keeping with a 4-4-2, Finland’s central midfielders Glen Kamara and Tim Sparv controlled the tempo of the game from the middle. Both full-backs and wide midfielders combined well in the channel to unlock the Irish defence and create goal-scoring opportunities.

The centre-forward pairing of Teemu Pukki and Fredrick Jensen of Bundesliga side Augsburg played well together. They were rotating well, receiving the ball between the lines while engineering dangerous chances from the transition to attack.

Ireland: 4-2-3-1
Kenny made four changes to the side that drew 0-0 with Wales earlier in the week. Both centre-backs and full-backs were instrumental in starting attacks, and when possession was won in the middle third, Ireland would go back to then go forward through the thirds in their attacking shape.

Tottenham Hotspur’s Matt Doherty and Sheffield United’s Enda Stevens were integral to their side’s attack, joining the play in every third of the field while still fulfilling their duties to defend when out of possession. The central midfield trio of Jeff Hendrick, Daryl Horgan and Aaron Connolly was fluid moving across the channels to receive a forward pass.

While Sean Maguire was tasked as the lone striker to bring others into play, get on the end of crosses and to be the first line of defence out of possession.

Ireland were very persistent and repetitive in their principles of play, starting from the back both centre-backs would split while both full-backs push high. One central-midfielder would drop alongside the centre-backs to create an overload of +1 to play through the first line of pressure.

The fluid high-to-low and horizontal movement of the attacking midfielders allowed Ireland to discover forward passing options centrally and out wide. When the play progressed into the middle and final third both full-backs would support from their respective side to create overloads and penetrating runs. 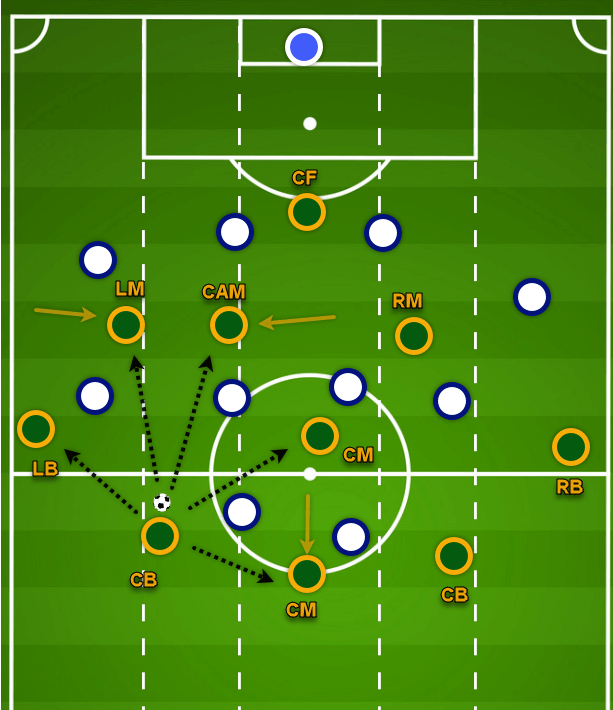 Above, we see a tactical illustration of the advantages to Ireland’s attacking strategy in the 4-2-3-1.
Notice the centre-back, in theory, has five passing options, four of which are forward passes that can break the lines. At the same time, one is a safety away from pressure. Also, observe the movement of the attacking midfielders to overload the half-space. 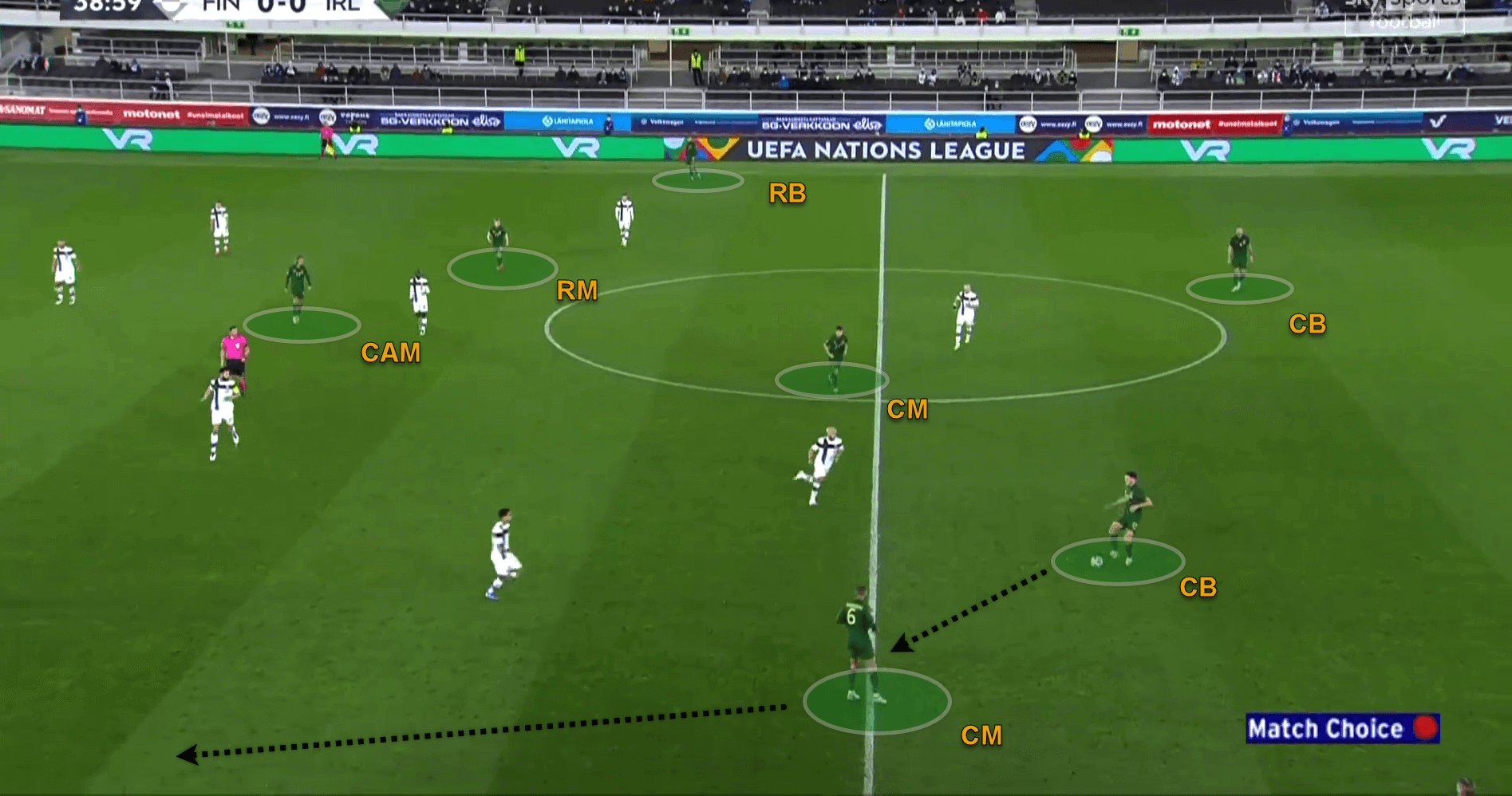 In the image above, we see Ireland’s shape in the build-up, as ‘CM’ Conor Hourihane drops deep to create an overload to beat the Finland forward press. Observe the movement of the surrounding Irish players.

In the transition to attack, Ireland would often go back to go forward. Frequently opting to play back to the defensive unit such that the team could progress up the field in their attacking shape. In the final third, Ireland had some issues finding the final product in front of goal, but we will cover more on that later. 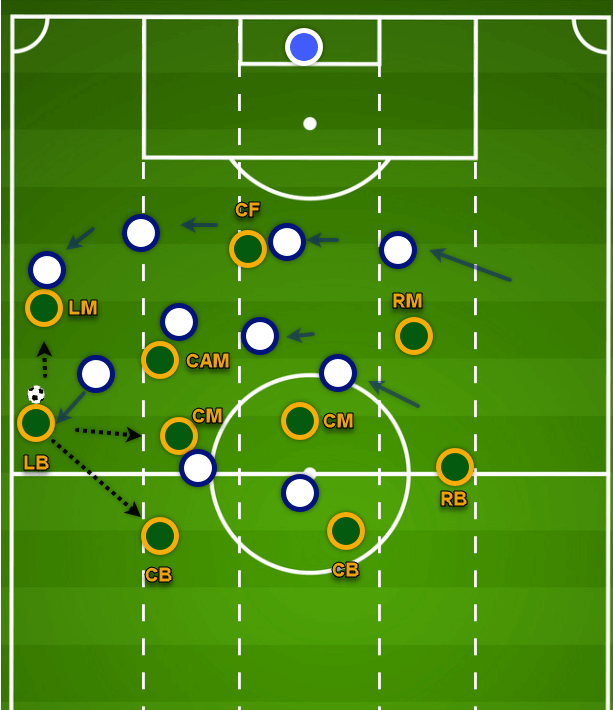 We see Ireland’s attacking shape in principle when advancing towards the final third from wide areas. The full-back and wide midfielder would often occupy the same vertical lines while the central-midfielders would shift across to create an overload in the half-space.

In possession, Ireland did well to progress the ball cleanly into the Finland half, furthermore to the edge of the final third. Finland’s defensive organisation was superb, and Ireland was tasked with having something extra by way of dribbling and movement to unlock the defence.

Finland played very comfortably and confidently in the 4-4-2. When tasked with building from the back Finland would do so superbly and with excellent efficiency to progress the ball cleanly away from pressure. The clever and energetic movement of the wide midfielders and full-backs to execute high-to-low as well as horizontal rotations made it difficult for the Irish midfielders and defenders to stay organised while defending. 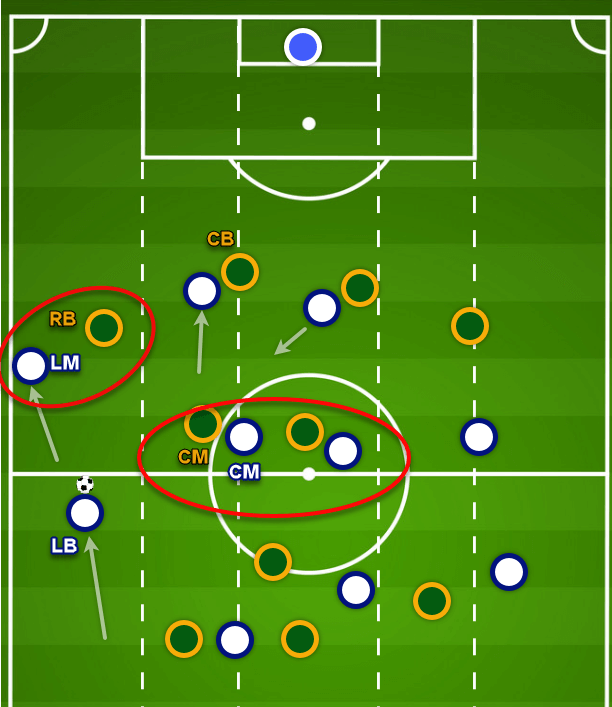 Finland’s ability to carry the ball forward into the Irish half when in possession or immediately in the transition to attack is shown above. Notice when the Irish wide forwards pushed high or when they left that space vacant from a prominent attack, the Finland full-backs would move into that space immediately when possession is won back. As from there, they would be able to drive into the Irish half and further without challenge due to numerical superiority. 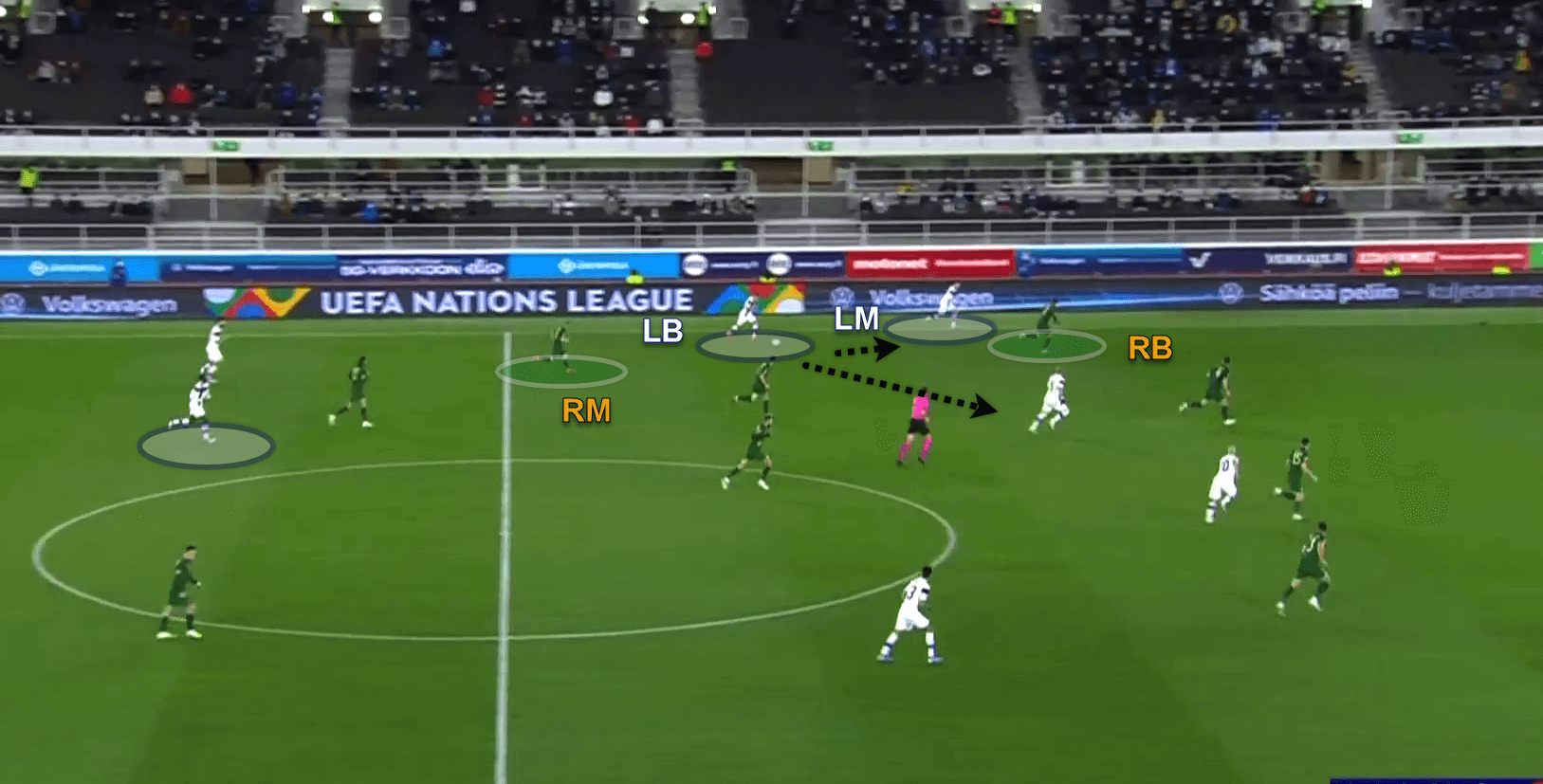 Above, we see an example of this dribbling movement. The Finland left-back runs into the space left open by the right-midfielder of Ireland. He then receives a pass and is able to carry the ball forward as the Irish defence drop to keep their shape. 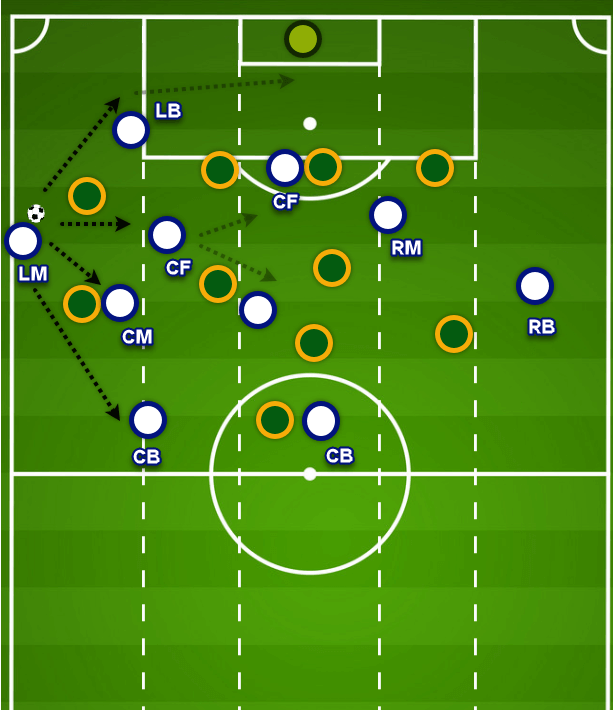 Above we see another tactical illustration of Finland’s attacking shape and movement in the final third. Notice when the left-midfielder is in possession, the shape and movement of the surrounding players. The full-back on the same side would make an underlapping run into the half-space channel, while the centre-forward and one central-midfielder would shift across to support.

Above, we see another example, this time of Finland attacking movement in wide areas.
Notice how narrow the right-back comes to make himself available for a penetrating pass.

Finland was superb in the attack; all ten outfielders were able to move the ball efficiently at a high tempo in the final third. Because of this, Finland was able to change the point of attack quickly as well as penetrate even when Ireland were compact.

Ireland’s troubles in front of goal

Ireland boss Stephen Kenny has rightly earned his praise for his ability to bring Ireland’s national side into the modern era of football with a stylistic and fluid approach to possession with progression. However, it is in the final third, Kenny will have his most significant challenge in improving his sides creative paralysis as well as their ability to finish in front of goal.

Ireland failed to show a clear identity and plan in the final third, with attacking runs not being fed passes, crosses hit with no real target, while the decision to shoot at times felt a little forced. Ireland did look a threat from set-pieces; however, from open play, they seemed to lack distinction and confidence in front of goal.

Let’s take a look at three such moments in the game where perhaps the best option was missed. 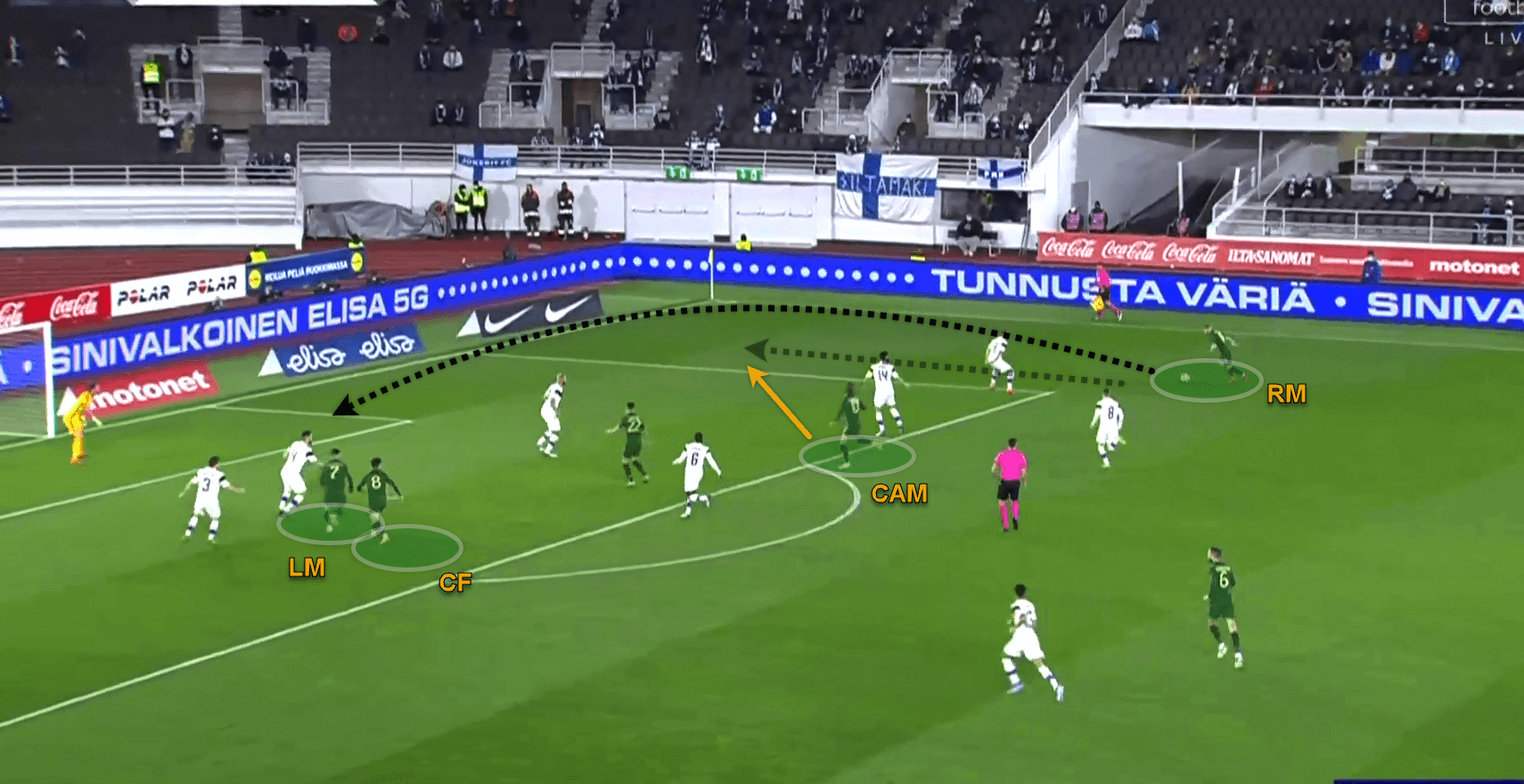 Above, we see a moment when Daryl Horgan sends an out-swinging cross to the penalty spot. Note the players meeting the cross is Sean Maguire (5ft 9″) and Aaron Connolly (5ft 10″). As they are looking to compete with two defenders both at 6ft+ in height. Not to say they do not have a right or a chance to compete, however, from this position when tall experienced defenders are balanced and prepared to meet an out-swinging cross perhaps the chances are not quite as favourable.

Yet, Hendricks is making a forward run into the box on the blindside of the full-back. Perhaps this might have been a better opportunity to progress the attack into a potential goal-scoring opportunity.

Again, right-footed, left-midfielder Connolly delivers an in-swinging cross to the penalty spot for the right-midfielder, against a balanced defence. Yet, in front of the Irish player’s eyes, is an underlapping run from left-back Enda Stevens, who is driving into the box. From here Stevens can invite a contact or deliver a cut-back cross for a green jersey entering the box.

Lastly, and perhaps the most glaring opportunity missed, Connolly again delivers a cross to the penalty spot, yet in front of the winger, the centre-forward Maguire is making a run towards goal, facing up the goalkeeper for a potential 1-v-1. Perhaps the instructions from the pre-match team meeting blinded the Irish ball carrier as he did not seem to recognise the simple run of the centre-forward right in front of him.

It has to be said, Although this is a negative theme of an assessment, Ireland’s style of play is improving game to game, and you get the sense, one goes in, maybe a few more goals will come easier than the challenges seem to suggest of recent. Bearing in mind, these players are not getting time train and rest, it’s a flight, to the hotel, to the stadium, with little time on the training ground.

For the third consecutive game, Ireland has come away with the superior xG yet not points to how for their spirited performances. Granted, Ireland still needs improving in the final third, yet you feel with the goalkeeper’s error, the issues are only more pronounced.

Finland continue their good run of form in this competition, and they will take confidence from their hard-fought 1-0 win. Markku’s side proves they can adapt and flourish against tough opposition and when it counts.

To track the progress of both of these teams, be sure to check back in with us in the next round of international fixtures.