It was a disappointing night for England, who suffered their first Nations League defeat of the campaign after a 1-0 loss against Denmark. The Three Lions put themselves in pole position in their group just days before, after coming from behind to beat Belgium 2-1. But Gareth Southgate’s side shot themselves in the foot against the Danes. They were facing an uphill battle from the half-hour mark when Harry Maguire picked up a second booking for following through on a challenge. Just minutes later, England’s misery was compounded when Kyle Walker gave away a controversial penalty. Christian Eriksen dispatched the spot-kick, and the ten men of England never managed to find a route back into the game.

This tactical analysis will look at the tactics used by both sides. 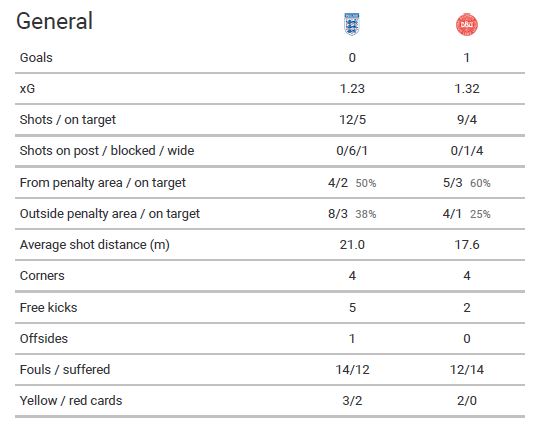 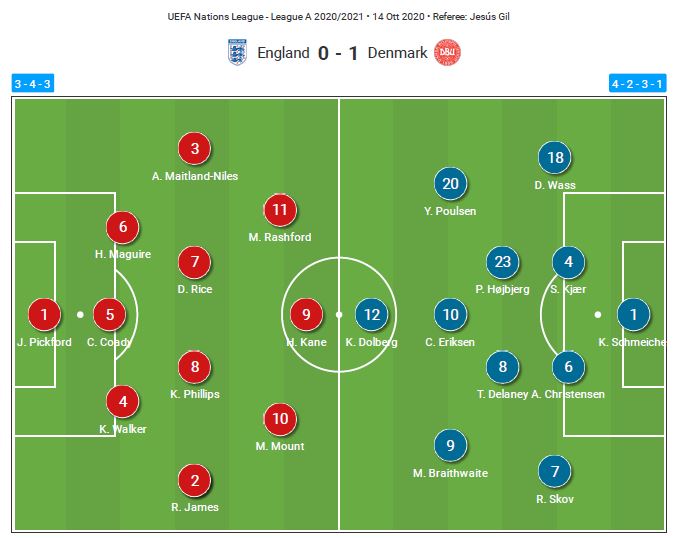 Denmark started with a 4-2-3-1 system. Kasper Schmeichel started between the sticks, behind a back four of Daniel Wass, Simon Kjaer, Andreas Christensen and Robert Skov. Thomas Delaney partnered Pierre Emile-Hojberg in a double pivot at the base of midfield. In front of them was Youssef Poulsen, Christian Eriksen and Barcelona man Martin Braithwaite. Young striker Kasper Dolberg led the line.

It always felt like it was going to be difficult for England to create chances, even before they went down to ten men. As we discussed in our analysis on the reverse fixture last month, the Three Lions struggled to play through the lines of Denmark, mainly down to the fact that Southgate chose to play two defensive midfielders in front of a back five. Despite that, Southgate chose to stick with this setup, and England had some very familiar problems to the ones they faced in Copenhagen.

Due to their numerical inferiority, it was very difficult for the midfield pair to make themselves available for the ball. This problem was especially prominent when one of them would go deep to collect the ball from the back three. As you can see in the image below, Phillips is the only England player in the midfield area, with five Danish players within a reasonable distance to press him if he receives possession. 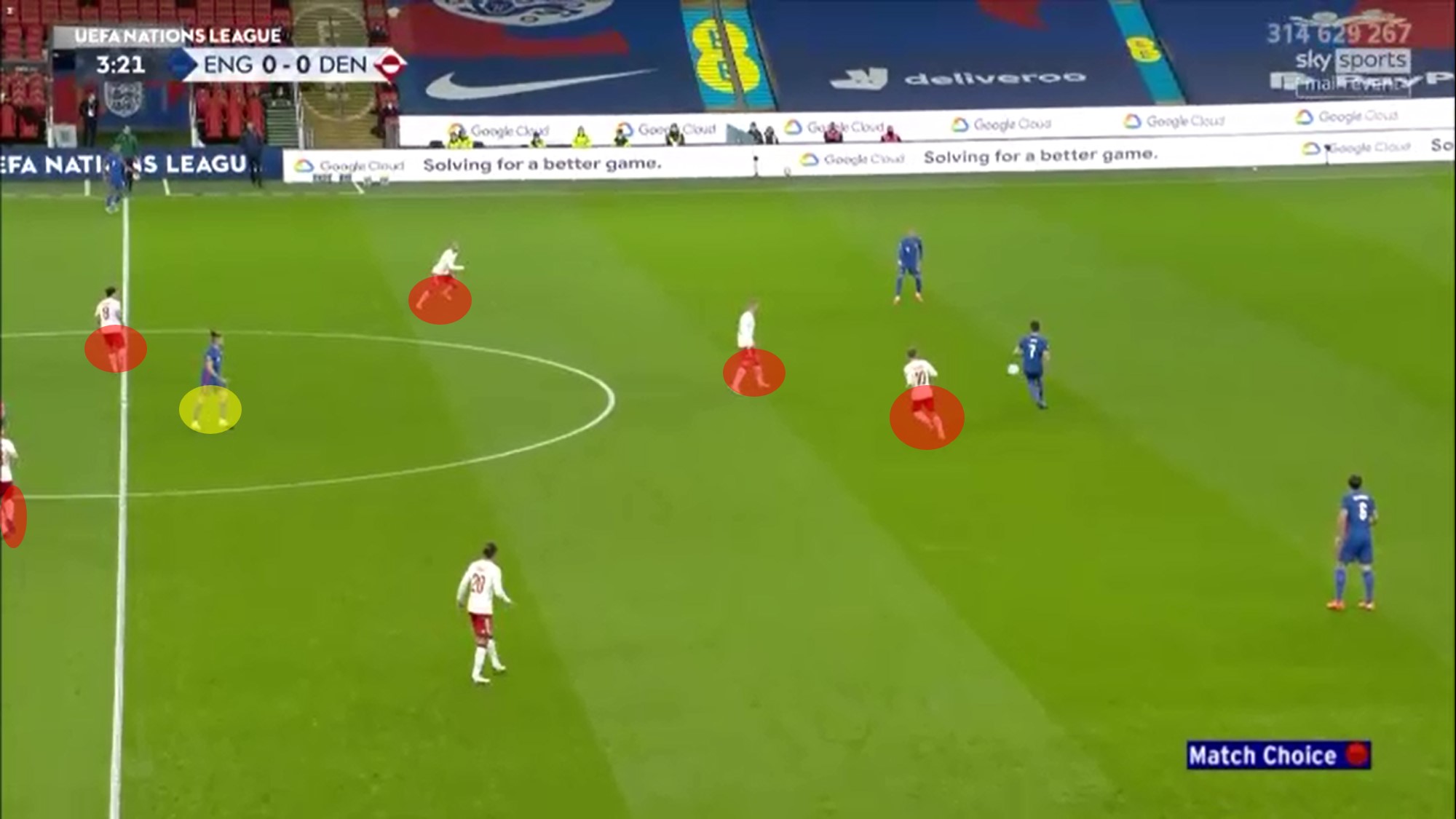 This meant it was very hard for England to pass the ball through infield, as there were very rarely forward passing options on. The front three were often too high, with nobody dropping deep to try and connect play. Denmark’s pressing structure was fairly narrow when England had the ball in central areas, so there were often a lot of Denmark players between the man on the ball and attacking players in central positions. Due to that, the Three Lions were frequently forced to play long, percentage passes, or to play the ball out wide.

Another problem England encountered in the build-up phase was their lack of a left-footed outfield player. Harry Maguire started on the left side of a back three, with Maitland-Niles as an inverted wingback. This meant that it was difficult for England to build down their left side because naturally, Maitland-Niles would come inside when he received possession. From there England would play more sideways passes which gave Denmark’s players time to get behind the ball. The lack of a left-footed centre-back until the introduction of Tyrone Mings also caused them problems. In the image below, Maitland-Niles has received the ball from the right-footed Maguire on the left side. 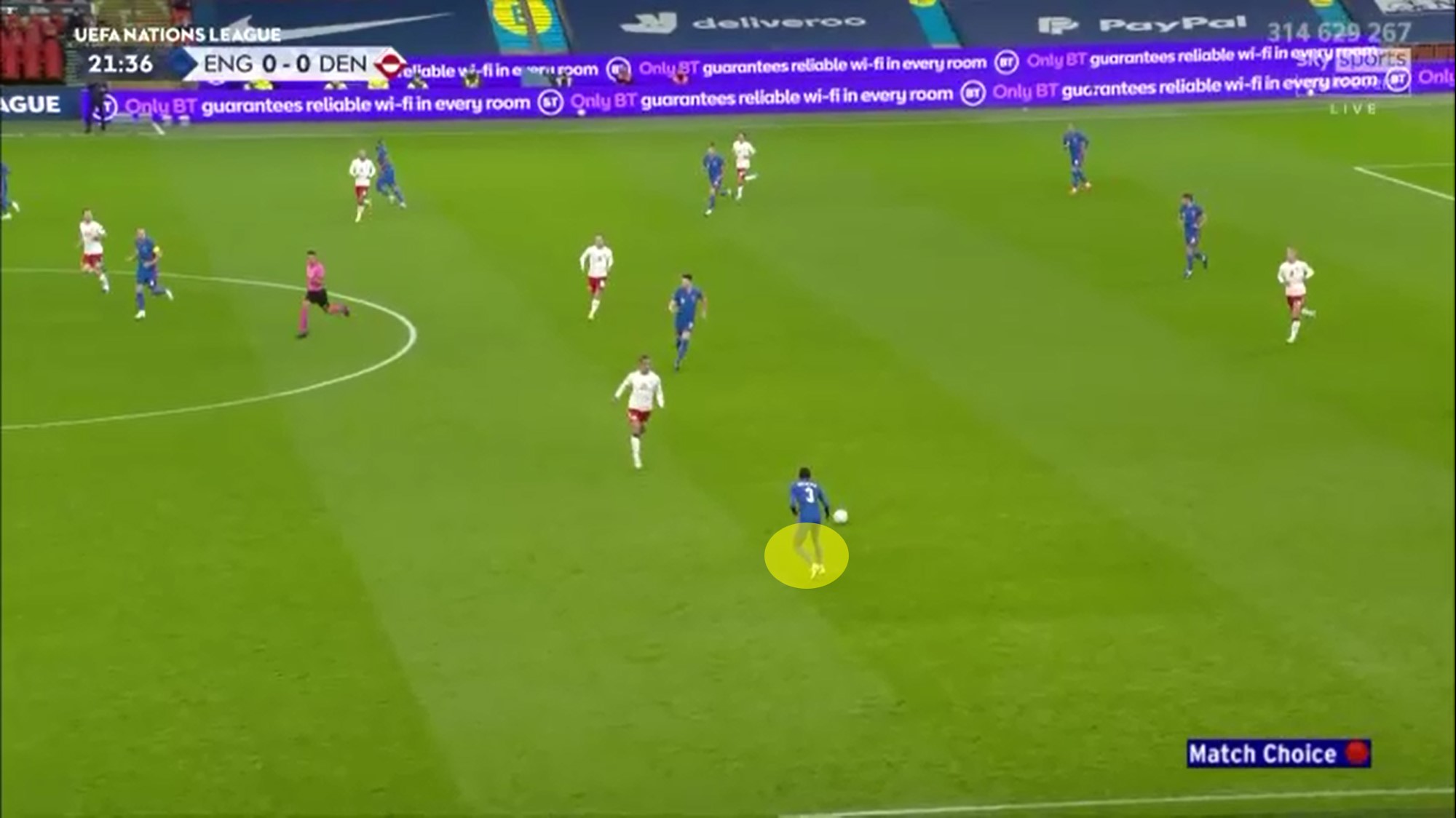 Notice how his body is turned inwards towards the centre of the pitch. This is because the natural trajectory of the pass from a right-footed player means that the ball is curving inwards towards Maitland-Niles, instead of curving away from him. Therefore, he needs to come inside to control the ball before he can even think about taking it on the outside. This slight delay slows down the attack and made it harder for England to catch Denmark out in transition.

The Danes also decided to try and flood England’s right to stop them playing down that side, forcing them to come inside, which often resulted in England switching the attack to their weaker left side. 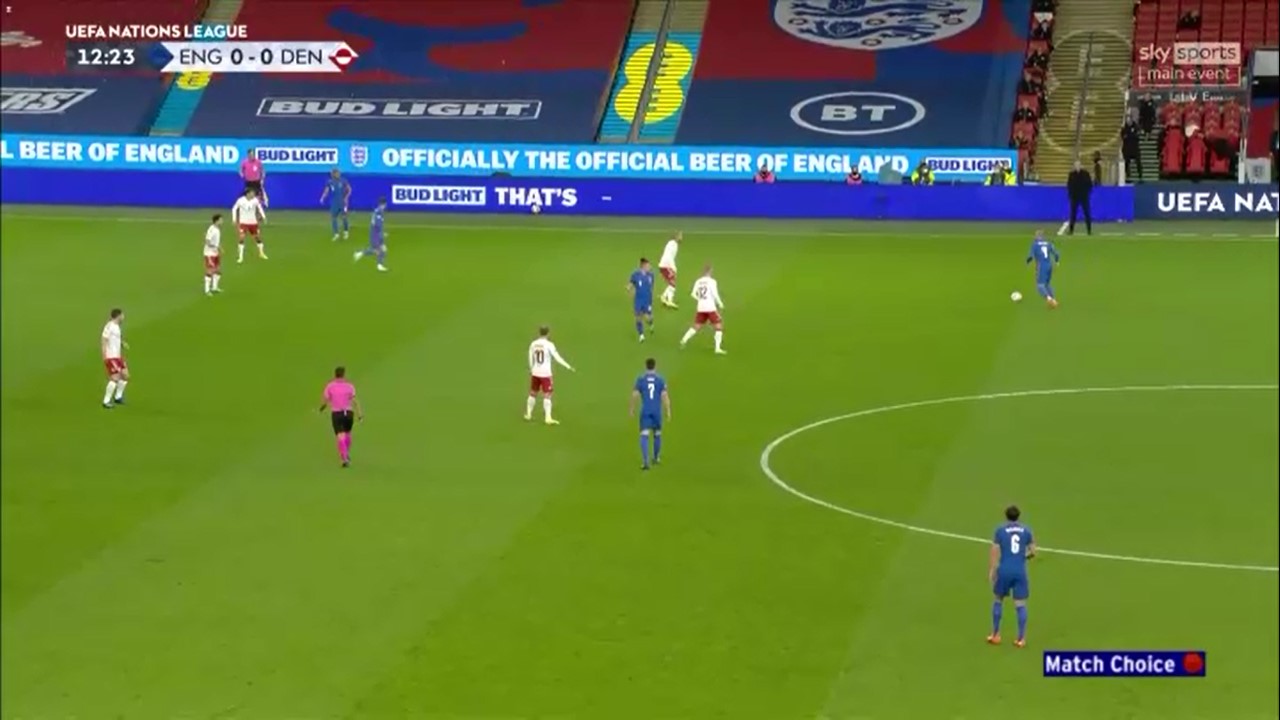 England did show some promising attacking signs in their wide play, despite their inability to sustain attacks. Their rotations in the half-spaces and wings were good at times. The next image was from one of the attacks they managed to build down the right. 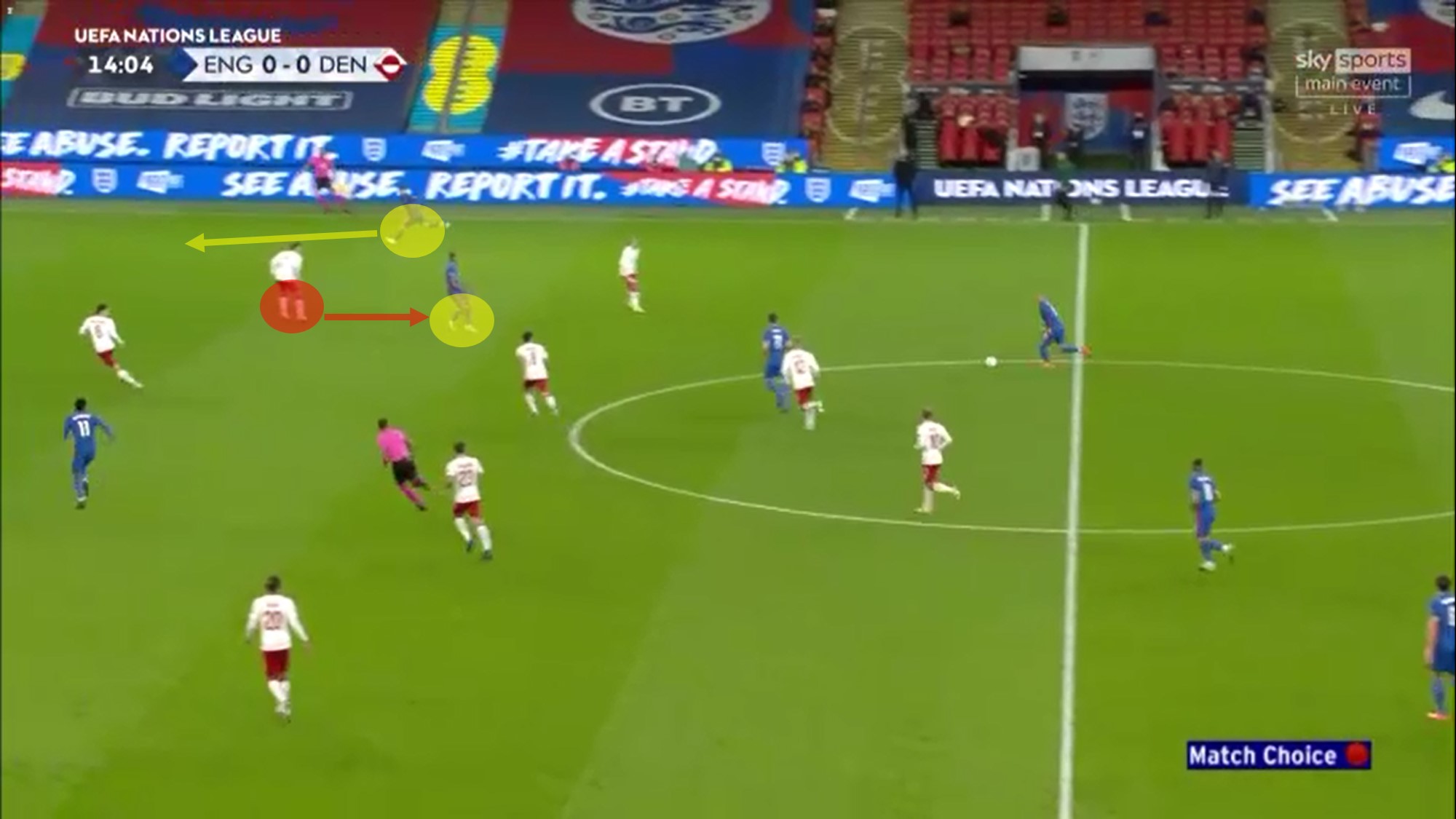 In possession, Kyle Walker has stepped out with the ball. England’s wide central defenders did this so they could try and disorganise the Danish defensive structure. The away side often pressed in a 4-4-2 as they did here, with Eriksen going up alongside Dolberg so he wasn’t outnumbered 3v1. Walker manages to take the ball past the first line of pressure, and he was then able to run at the second line. By doing this, you’re inviting a player from the second line of pressure to step out of that line and press, meaning that they’d potentially be leaving space to exploit behind them.

But the key thing in the image above is the positions of Reece James and Mason Mount. James is taking up a narrower position in the half-space, which attracts the attention of Danish left-back Skov. Because of this, he’s pinned into a narrower position, meaning that Mount could get in behind the defence in a wide position. He times his run brilliantly and Walker slips the ball through.

Mount did get into good positions, but his end product let him down on numerous occasions. As the game went on, it became harder for Southgate’s side to produce these moments of combination play because they had ten men. When they switched to a back four, the full-backs had to be more conservative so they could take up as high positions as Reece did in the image above. Their problems in progressing the ball through the middle persisted, so they’d often go for a direct pass up to Kane and Dominic Calvert-Lewin when he came on.

This game wasn’t littered with quality goalscoring opportunities from open play. The best chances in terms of xG were Eriksen’s penalty (0.78 xG) and Coady and Mount’s headers from set-pieces (0.46 and 0.41 xG respectively). However, the Danish side did manage to use positional rotations to create space for each other. The attacking midfield trio of Eriksen, Braithwaite and Poulsen don’t possess much natural width, so they’d often try to drift infield to get on the ball in between the lines of the England defence and midfield. You can see this happening in the image below. 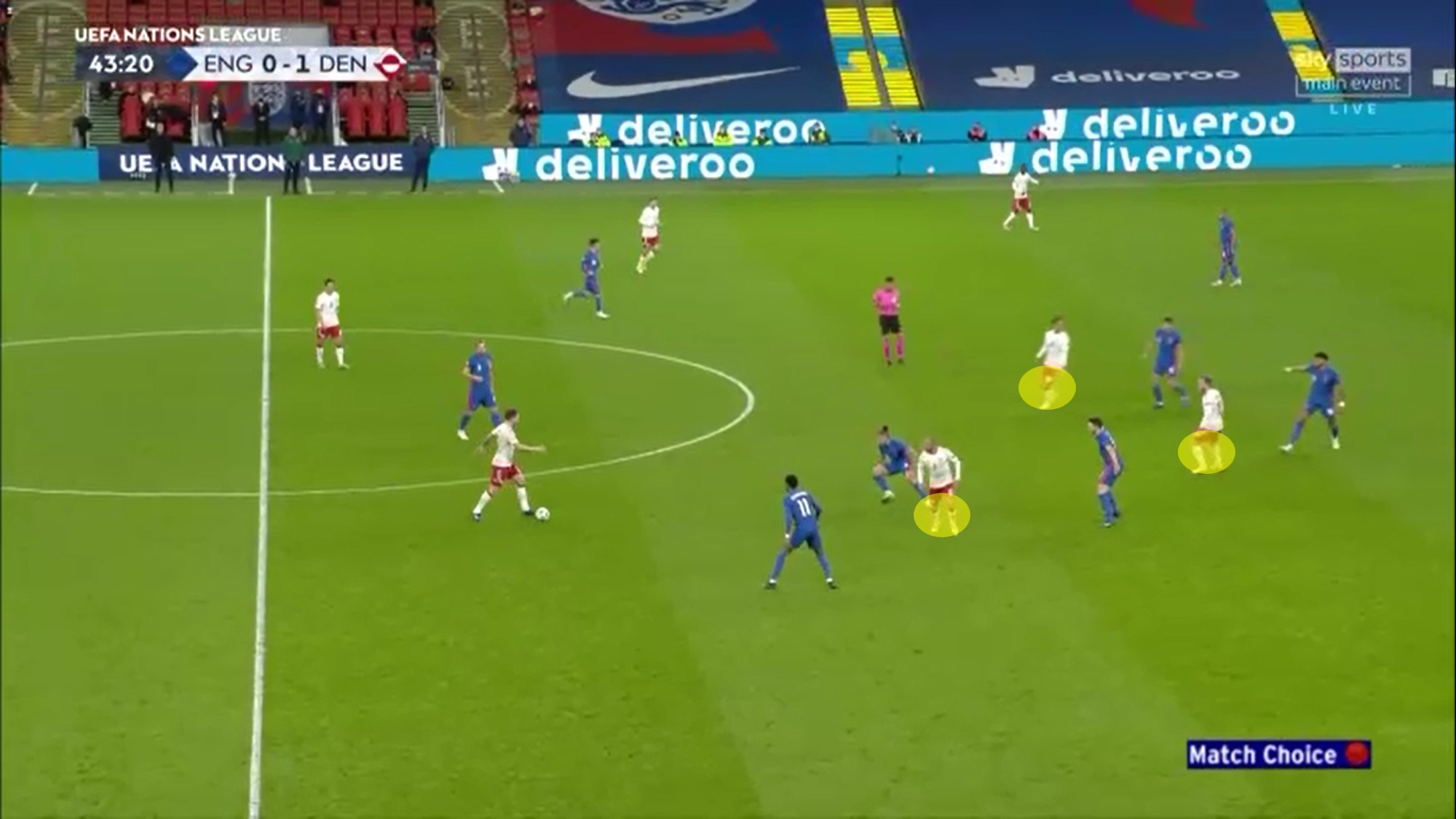 By overloading central areas, they forced England to crowd bodies around them. This opened up space in the wide areas, and Denmark were playing with two attacking-minded full-backs. In that passage of play, they worked the ball out wide to Wass, who was then able to run 1v1 at Walker. 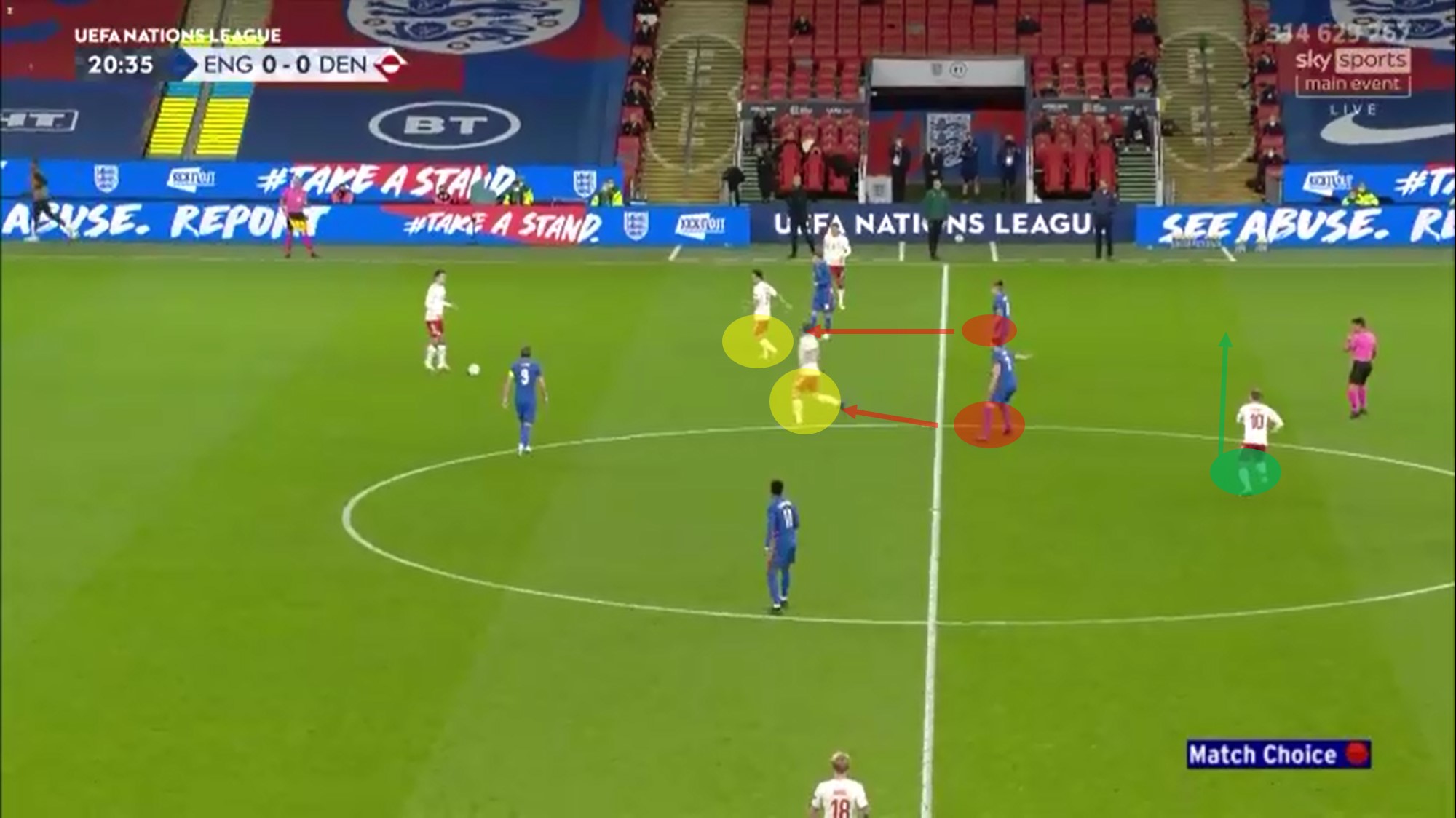 Walker then comes out wide to close him down, which means there’s a gap between him and the left-sided centre-back Tyrone Mings. Braithwaite, who started from a deeper position, then attacks that space. By starting deeper and moving forward, he’s able to be dynamic whilst moving into space instead of becoming static and easy to mark.

Denmark’s double pivot of Thomas Delaney and Pierre-Emile Hojberg played a key role in helping to ensure that the visitors had balance in the midfield. Their deeper positioning gave the attacking players more license to try and cause problems for the Three Lions. They also created space for their teammates (particularly Christian Eriksen) between the lines of England’s midfield and defence. In the image below, they come deep to the defenders in possession, looking like they intend to receive the ball. This invites Rice and Phillips to press a bit higher, which leaves space in behind for Eriksen to exploit.

In terms of England’s defensive shape, they set up in a midblock. The front three of England would stay narrow, with the focus on outnumbering the double pivot 3v2.

When they were down to ten men, England changed to a 4-4-1 system out of possession. It became harder for them to apply pressure on the Danish players because the wide forwards had to press from deeper positions due to a lack of security behind them. As they were leading 1-0, Denmark were in no rush to move the ball forward quickly in transition so they’d hold onto the ball. Kasper Hjulmand’s side enjoyed 60% possession in the second half, compared to 47% before the interval.

It will have been difficult for Gareth Southgate to take too much out of this game. His side had made an okay start to the clash, without creating any clear cut chances. They certainly didn’t look menacing every time they went forward, and when you look at the talent England have in those areas, their lack of attacking thrust in every game they’ve played this year has been disappointing. On the other hand, Denmark rarely carved England open despite having an extra man for 70 minutes. England were unlucky to give away a controversial penalty which ultimately cost them a point, although Denmark will have shown more attacking intent had the game stayed goalless.

England fans will be frustrated at yet another negative team selection from Southgate. When you boast attacking players such as Kane, Calvert-Lewin, Sancho, Grealish, Mount and Rashford, surely you should play to your strengths and try to attack teams? The feelgood factor that England’s 2018 and 2019 performances brought could fade away if Southgate isn’t careful.