Borussia Dortmund finally begin life without Jadon Sancho. The 21-year-old’s transfer to Manchester United was completed finally in the last week of July 2021, putting an end to three years of speculation. Sancho’s time at Dortmund is worth looking back on. In his four seasons at Dortmund, Sancho made 137 appearances and finished with 50 goals and 58 assists. It will indeed be hard to replace him, but Dortmund do have some firepower thanks to their smart recruitment in recent years. That might make the job replacing him a little bit easier.

The following visualisation compares Dortmund’s attackers from last season (other than Sancho). Players must have played a minimum 1050 minutes to be considered for this analysis. 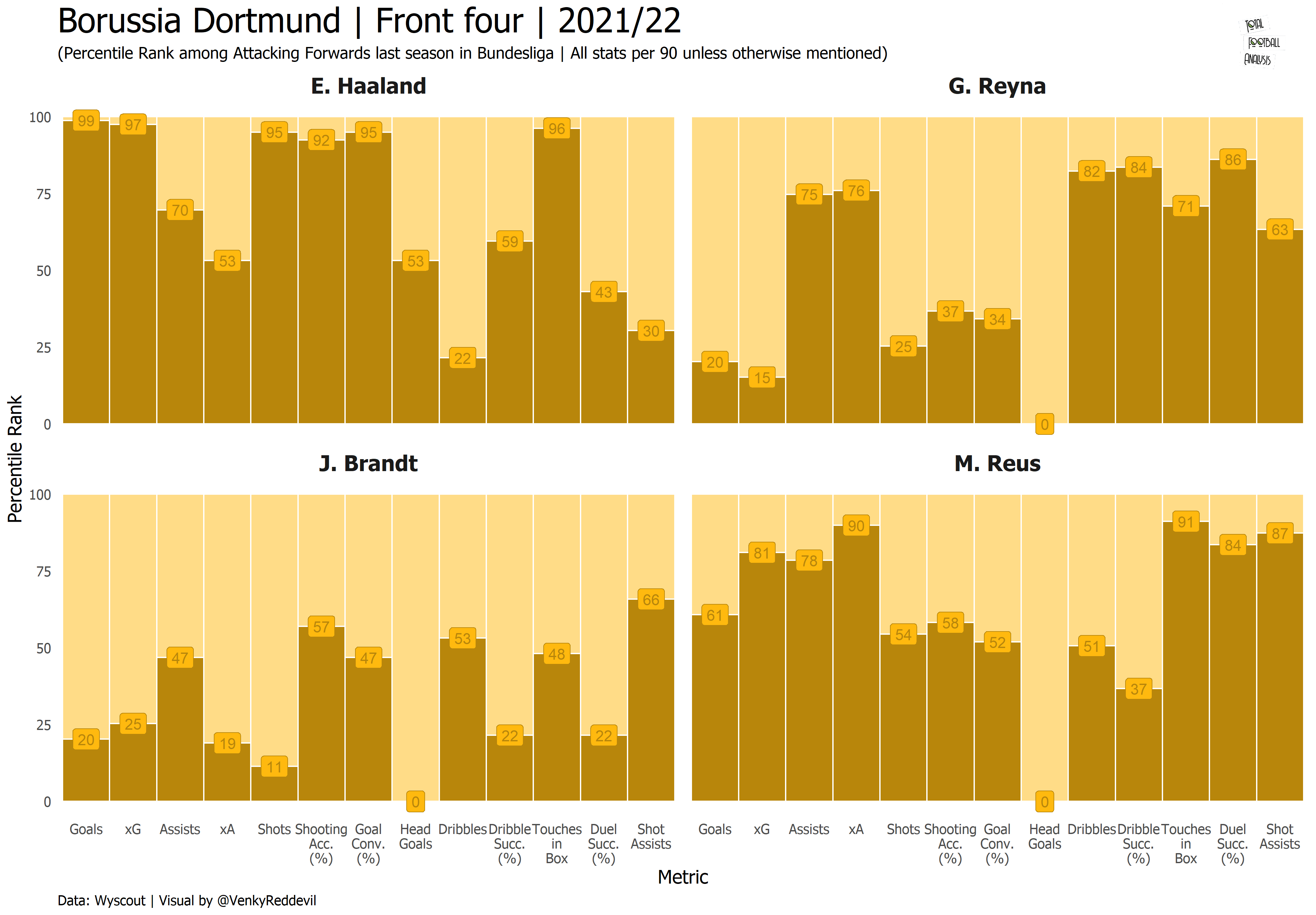 There is no burden on anybody to score the goals, as Haaland, like he did when Sancho was there, will bear the full burden of finding the back of the net. However, Jadon Sancho and Erling Haaland formed an excellent partnership that will need to be replaced effectively if Dortmund are to find their feet. As seen in the visual above, Marco Reus and Gio Reyna are able creators. Dortmund would not have any problems creating chances if Reus, in particular, stays injury-free and finds his feet. The German finished last season with six assists, joint-third highest among Dortmund players. In only his second season for the Dortmund first team, Reyna finished with five assists and four goals in the league. This could be a big season for the United States international given his ability to play anywhere in the front four. Julian Brandt is linked with a move away from Dortmund but if he stays at Signal Iduna Park, the German could have a big 2021/22 season. Brandt had a disappointing 20/21 season, with the German international playing less than 1600 minutes. However, Sancho leaving the club means Brandt will get more opportunities this season and it is up to him to cement his place.

Thorgan Hazard, who missed a major part of last season and summer signing Donyell Malen will also add much needed unpredictability and pace to Dortmund’s attack. All of Dortmund’s attackers are dynamic, versatile, quick and lethal. Hence, Dortmund are not short of options but they will need to quickly find their best combination if they want to be serious contenders this season. Reus, Reyna, Malen and Haaland will be a frequently used combination but Hazard and Brandt will get their chances to have a say.