Reece James: Can Wigan’s on-loan star make it back at Chelsea?

During the Abramovich era, Chelsea have been somewhat defined by their ‘hire and fire’ mentality. In order to stay in the job, Blues managers have favoured experienced players to achieve success in the short-term. It’s an approach that has led to regular trophy wins, but the club’s youngsters have been the big losers.

Despite a high level of talent consistently emerging from the academy, graduates continue to be farmed out on loan. Ruben Loftus-Cheek faces being pushed further back in the pecking order by the imminent arrival of Leandro Paredes. Meanwhile, Callum Hudson-Odoi is weighing up offers to leave following the club’s signing of fellow winger Cristian Pulisic.

In light of all this, Wigan loan star Reece James may not be a prospective player for Chelsea’s first team, but he does appear likely to forge a successful career in any case. This tactical analysis will shine a light on the flying full-back following his impressive start to life as a professional.

Reece James joined Chelsea’s academy at the age of just seven. Last season, he earned the club’s academy player of the season award, having captained his side to FA Youth Cup victory. He has represented England up to under-20 level and is expected to make the step up to the under-21s before the end of the year.

Last summer saw him join Wigan on loan, where he has been earning rave reviews. He won the Latics’ player of the month award three times in a row between September and November. James has made 27 appearances in the Championship, scoring once and assisting another.

While he does have the stamina to consistently dominate the right flank, James is not particularly quick. What he lacks in pace, however, he makes up for in close control. He regularly dribbles diagonally before playing a through-ball or a cross to the back post.

With the ability to bypass pressure, the young full-back is capable of driving through more congested spaces in the centre. By drawing opponents in, he often creates space further wide for his teammates to move into. On average, he completes 2.76 dribbles per 90 minutes, with a success rate of 84.8%.

The images below illustrate James’ talent for carrying the ball forward via the half-spaces before picking out a teammate up front. With the opponent blocking off his route for progression down the wings, he decides to dribble infield. His teammate creates space by moving away from the play, taking a defender with him. 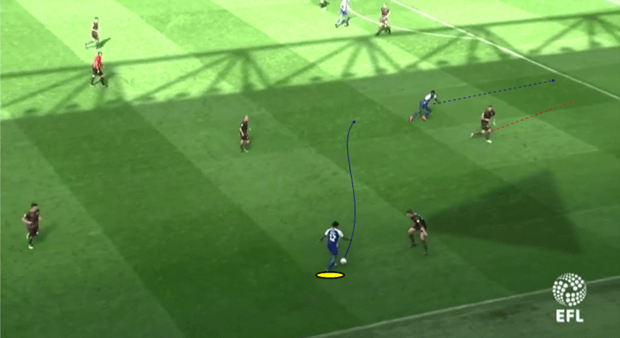 Having bypassed the first opponent, the 19-year-old dribbles towards another defender. This allows his teammate to get free and move into the space behind him. 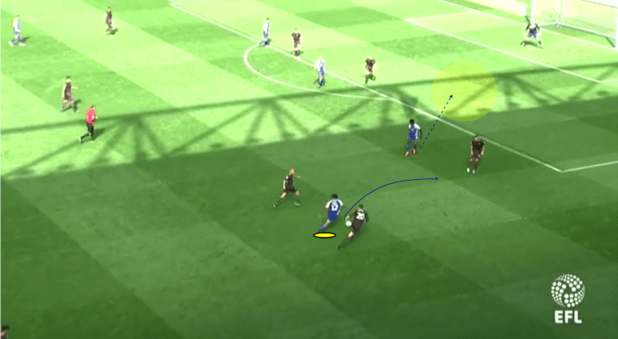 With all the defenders on the last line engaged, the striker is open to receive from James. His teammate’s shot on goal is saved, but the opportunity highlights how quickly he can carry the ball into the final third with intelligent dribbling. 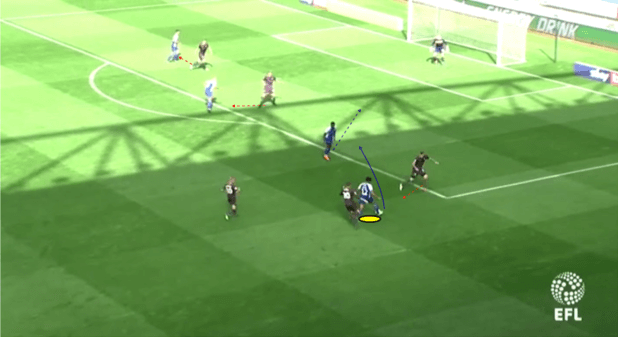 His capacity to vary between inverted play and exploiting one-on-ones on the outside make him a great all-round full-back prospect. Opponents find it difficult to nullify his threat just by shutting off one option, as shown in the sequence above.

Having spent much of his development playing as a winger, James’ one-on-one qualities help him get past opponents on the outside despite his lack of speed. He regularly waits for an opponent to commit before pushing the ball beyond them at the last second. This type of play frequently takes him into potential crossing scenarios, and his delivery from wide areas is perhaps the most impressive aspect of his game.

The images below highlight his talent for opening up crossing opportunities before delivering a perfectly timed cross to the front post. While James fronts up the opposing full-back, his teammate engages another defender to prevent a double-up. 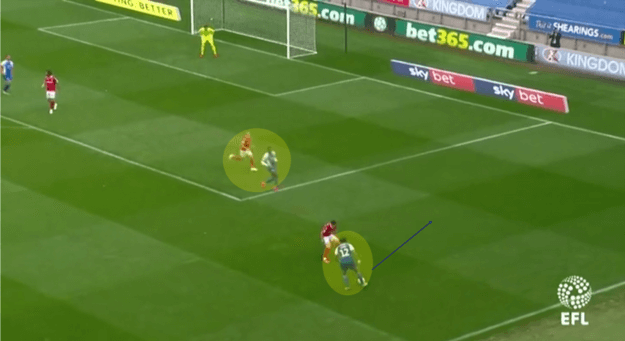 The teenager waits for the defender’s attempted challenge before flicking the ball past him and delivering. The cross is low and hard, giving the keeper no time to come out and claim it. The receiving striker gets ahead of his marker but misses the target from close range. 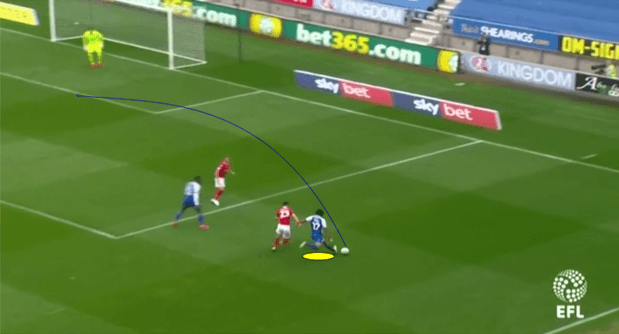 James has an excellent understanding of the weight and height required on the cross in different scenarios. He recognises where the space is, where his teammates are and where the opponents are, before executing the appropriate delivery. He has made an average of 4.39 crosses per game this season. Furthermore, he engages in 6.41 offensive duels, coming out on top 57.4% of the time.

Because he spends much of his time high up the pitch, the youngster is required to make a lot of recovery runs. He can’t get back in the manner of Hector Bellerin or Patrick van Aanholt, for example. However, his positioning is often better in anticipation of transitions, and his determination also helps him make up ground against quicker opponents.

His defensive duel statistics suggest room for improvement though, as he wins just 23.8% of his 6.69 per game. He does, however, record 8.39 turnovers, and his mentality suggests he’ll improve on his overall defensive game.

“I look back at every performance. I’m keen to learn the aspects of the game that I could do better in.”

In the images below, the opposition play a lofted pass over Wigan’s defence. James is caught lagging behind two attackers as they run in behind. 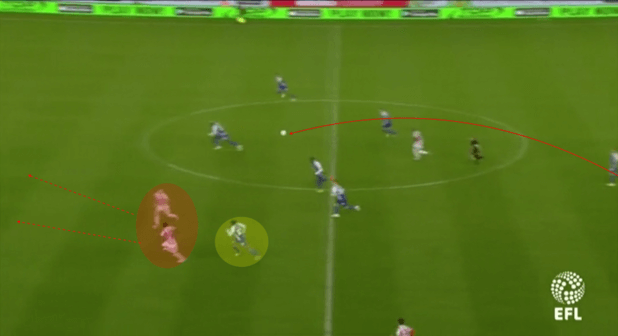 He manages to get back goal-side with a determined recovery run and blocks off the passing lane to the second attacker with clever body positioning. He then forces the player on the ball down the line. 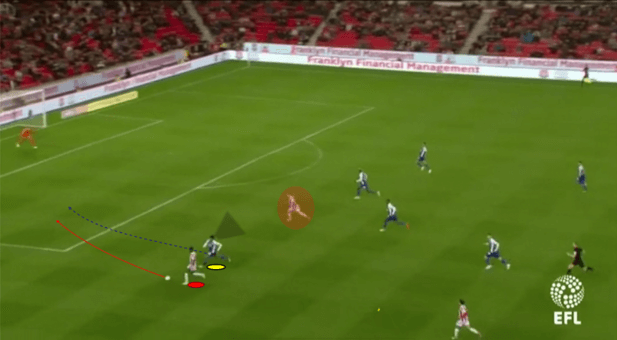 Staying with the attacker all the way, he tries to usher him away from goal. In the end, he succeeds in completing the recovery with a well-timed challenge inside the penalty area. 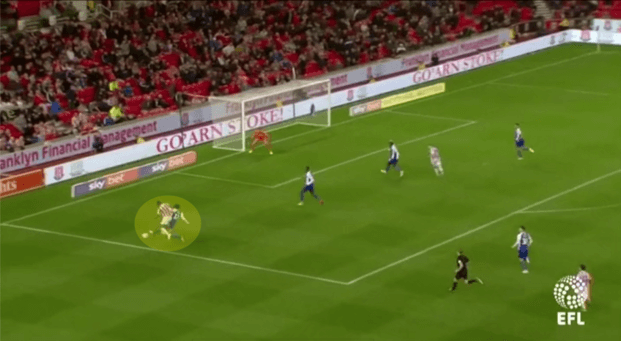 As stated previously, the Englishman has to rely on qualities other than pace, both in the defensive and attacking phases of the game. His intelligence, technique and stamina overcome this weakness and prevent it from limiting his game in any significant way.

With supporters urging the club to finally give youth a chance, perhaps Reece James will get the opportunity to prove himself in the Chelsea first team next season. However, their January transfer business does little to suggest a shift from Abramovich’s favoured ownership style. Nevertheless, James appears to have the talent and attitude to forge a successful career at the top.