Round 18 of the Bundesliga kicked off the second half of the league campaign in Germany, following the mid-season winter break. Reigning champions Bayern Munich lie six points behind league leaders Borussia Dortmund and travelled to the Rhein-Neckar-Arena looking to extend their five-match winning run. Bayern triumphed in the reverse fixture against Hoffenheim on the opening day of the season, winning 3-1 at the Allianz Arena.

Julian Nagelsmann’s Hoffenheim sat six points off the last Champions League qualification spot ahead of this game and needed to get back to winning ways to avoid being cut adrift. Die Kraichgauer were unbeaten in their previous 10 Bundesliga matches, the longest current unbeaten run in the league. However, they also hadn’t won any of their last six games, drawing them all.

Bayern had finished 2018 with five straight wins in the Bundesliga as they began recovering lost points from the early games of their campaign. Niko Kovac’s side are in a state of transition but still hold the belief that they can catch league leaders Dortmund and secure their seventh straight Bundesliga title.

Here is a look at how both teams lined-up at kick-off. 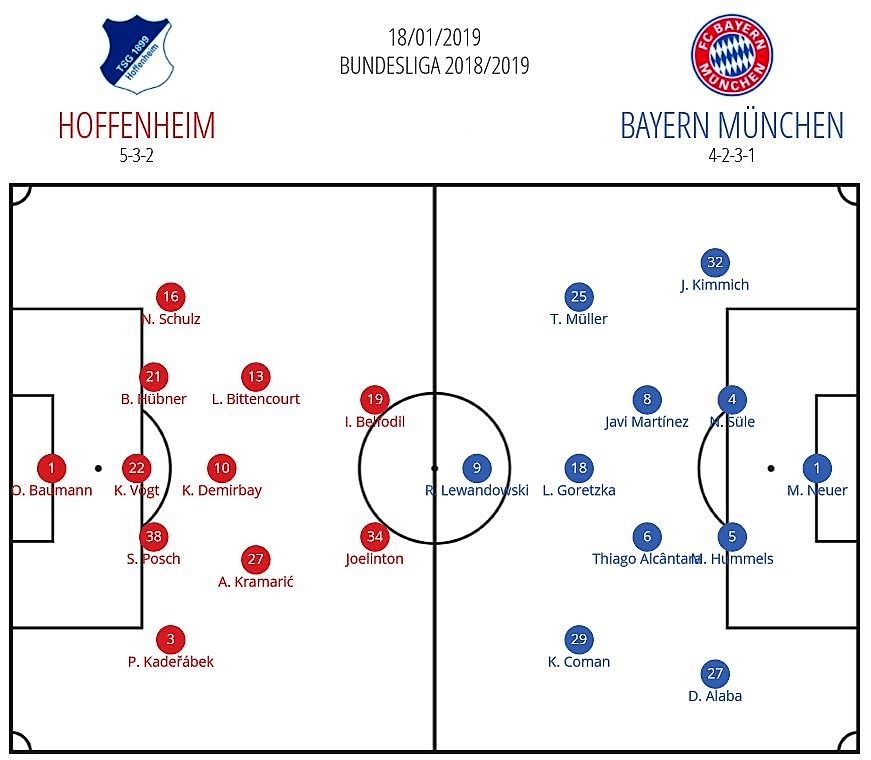 The above formations are regularly utilised by both sides. Hoffenheim centre-backs Benjamin Hübner and Stefan Posch are comfortable on the ball. Andrej Kramarić and Leonardo Bittencourt push forward in attack and contribute in the goals and assists department. Bayern’s elite playmaker, Thiago Alcântara, is the key man in midfield, while Thomas Müller plays like a wide second striker, expertly drifting into goalscoring positions.

As Bayern dominated the ball in the opening stages, Nagelsmann’s Hoffenheim were set up in a 5-3-2 formation in defence. As is their usual modus operandi, Hoffenheim pressed high to stifle their opposition’s build-up play. With Bayern’s Thiago Alcântara looking to dictate play from a deep midfield role, Hoffenheim focused their high press centrally. However, this sometimes allowed Bayern centre-backs Niklas Süle and Mats Hummels time on the ball in wide areas to pick out forward passes.

This led to Bayern playing around the high press with some ease and pushing Hoffenheim backwards into their 5-3-2 block. Against this block, Bayern found some joy in wide areas. Both of their full-backs got forward, giving license to wide midfielders Thomas Muller and Kingsley Coman to push inward. This allowed them to create numerical parity or advantages against the Hoffenheim backline.

Hoffenheim’s shape also led to them looking to counter-attack centrally. Bayern countered this by having two holding midfield players, Thiago and Javi Martínez, sitting in front of their centre-back teammates. The shape of those four players created something of a square block centrally for Bayern, a solid base for both build-up play and foiling Hoffenheim’s counter-attacks.

Thiago was key to Bayern’s play in the first half. The Bavarians gained control in the midfield area as their Spanish playmaker pulled the strings. Hoffenheim focused their press around stopping the former Barcelona man, but Thiago found a way to make Bayern’s build-up play work.

Bayern themselves also pressed very high and disrupted Hoffenheim’s build-up by marking man-to-man. Hoffenheim goalkeeper Oliver Baumann often attempted to play over the high press, directly to his forward teammates. Unfortunately for him, he found the defensive trio of Süle, Hummels and Martínez too good to beat in aerial battles.

After 20 minutes, Bayern had been by far the better side but hadn’t made the breakthrough on the scoresheet. An intense high-press is difficult to keep up for a full half, let alone a full game. After this point, they seemed to intentionally drop deeper without the ball. This allowed Hoffenheim to show more patience in their build-up, make shorter forward passes and commit more bodies forward in attack.

Bayern put faith in their defenders’ one-on-one capabilities and took the risk of leaving their wingers in advanced positions, primed for counter-attacks. Kingsley Coman caused havoc on Bayern’s left flank. He was continuously getting the better of his man in one-on-one situations and used his athleticism to transition the ball quickly from back to front for the away side.

Hoffenheim had attempted to shut down the middle of the pitch and counter-attack but Bayern’s passing was exquisite and they rarely lost the ball. Eventually, Bayern’s dominance paid off. The lack of pressure on centre-backs Hummels and Süle mixed with the advanced position of Bayern’s attacking quartet allowed Mats Hummels to bypass half the Hoffenheim team in the 34th minute.

Leon Goretzka found Kingsley Coman, whose dribbling success so far in this game led to him being confronted by two Hoffenheim players. Neither of them pressed the Frenchman though, as he picked out Robert Lewandowski with a cross. A subsequent header from the Polish striker was saved but parried only as far as the on-running Goretzka, who struck from a narrow angle to make it 1-0.

Bayern’s passing and ball control were of a truly elite level in this first half, and so it continued after the first goal. Hoffenheim needed to regroup and figure out a way to make life difficult for their illustrious visitors. They would have been happy, given how the first half had gone, to get into the dressing rooms 1-0 down at half time.

Leon Goretzka had other ideas. A lightning-quick counter-attack in first-half stoppage time following a Hoffenheim corner-kick saw Bayern have a numerical advantage in their opposition’s half. David Alaba’s superb low-cross found Goretzka arrive at pace in the box to finish first time and make it 2-0 to Bayern.

The old saying of “2-0 is a dangerous lead” may have been uttered in the Hoffenheim dressing room at half time. Julian Nagelsmann’s team began the second half with attacking intent. Die Kraichgauer altered their pressing approach and began to set up wide pressing traps.

They allowed Bayern to find their widely split centre-backs but would then press intensely from in-to-out. The intention was to shut off central options, including Thiago, and close down forward passes to advanced full-backs and wide midfielders.

This gave Hoffenheim the edge in the second half as Bayern were slow to come to terms with the new challenge laid down by their hosts. Thiago found himself with less time in possession and fewer passing options while Hoffenheim also counter-attacked with pace and numbers.

The attacking intent shown by the home side paid off in the 59th minute as they pulled a goal back through left wing-back Nico Schulz. Nagelsmann’s side retrieved the ball outside their own box following a Bayern corner-kick and subsequently broke forward at pace with numbers in attack.

Hoffenheim continued to push for an equaliser in the remaining 30 minutes but couldn’t match Bayern’s quality in possession. The Bavarians soon got the better of the possession stats once again while continuing to counter-attack dangerously in transition from defence to attack. Their dominance told in the 87th minute with a Robert Lewandowski finish that made it 3-1 to the visitors. Substitute James Rodríguez played a big part in creating Bayern’s third. He was influential in a playmaking number 10 role following the departure of Thiago, which saw Leon Goretzka drop back alongside Javi Martínez.

Whether through keeping possession and pressing high in the opposition half or sitting deeper to create space for counter-attacks, Bayern were superior to Hoffenheim for the large majority of the game. The Bavarians’ top-class technical qualities were evident throughout the match as they looked intent on making a statement to their title rivals. They dominated the ball for all but a 10-minute period in the second half. Despite the one goal for their hosts, they were largely successful in halting Hoffenheim’s attacks in their early stages, reducing Nagelsmann’s side to only five shots on target.

Their individual superiority was clear to see as well. Bayern won 11 of their 19 take-on attempts while Hoffenheim could only win 1 from 11 of their own. When a side that has the finishing qualities of Leon Goretzka and former Borussia Dortmund striker Robert Lewandowski, there is only one realistic outcome. Niko Kovac and his team have backed up their belief that they can play like title winners again, and will look to keep this form up over the coming months.

Julian Nagelsmann will be displeased with his team’s attempt at pressuring Bayern in defensive situations in the first half. They were too easy to play through for the Bavarian giants. He will, however, take positives from their response in the second half. Hoffenheim made life difficult for their visitors and perhaps could have got a result had they begun the first half in a similar fashion.