Fulham’s match against Tottenham ended with a thrilling stoppage-time winner from Tottenham’s Harry Winks. The lead-up to the match provided an interesting tactical question. How would Tottenham cope without their top three goal scorers in Harry Kane, Son Heung-min, and Lucas Moura? Using statistics and tactical analysis we will answer this question.

Both teams lined up in similar back-three formations with wing-backs and three attackers high up the field. Within the formation, each team’s style of play came out. Tottenham used fluid interchanging play with the midfielders, while Fulham were more structured in their positioning.

No Kane, Son, or Moura

Entering gameweek 23, Kane, Son, and Moura had combined for 28 goals. The trio accounted for 58% of all of Tottenham’s Premier League goals this season. The 28 goals are more than 10 entire Premier League teams had scored through 22 games. Fulham came into the match only scoring 20 goals all season. That is an immense amount of firepower to be without.

Mauricio Pochettino elected to go with Fernando Llorente up top with Erik Lamela on the right, Dele Alli on the left, with ex-Ajax schemer Christian Eriksen and Harry Winks underneath. Harry Winks sat deeper than Eriksen in the middle. 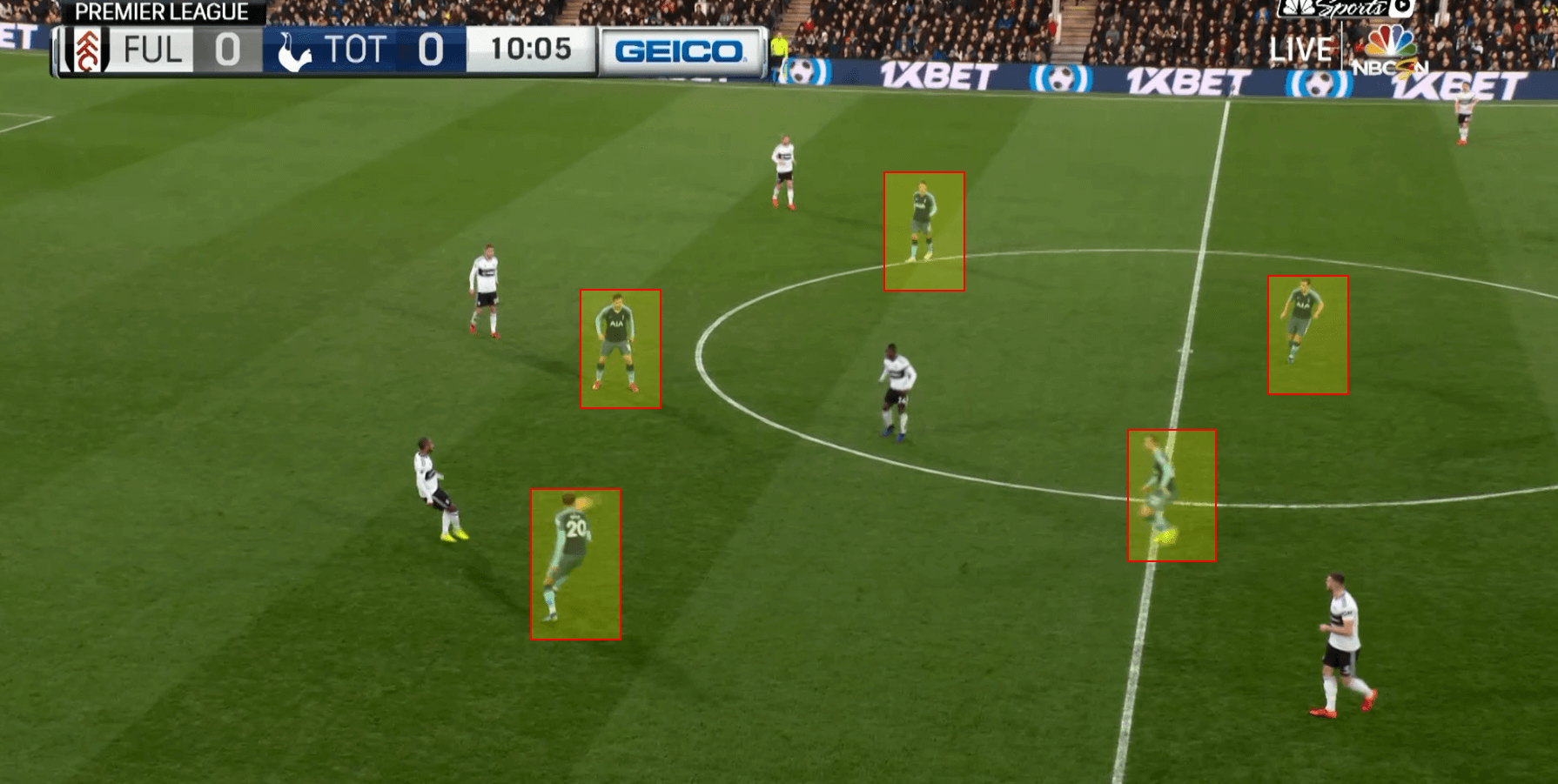 Attacking down the left

The Tottenham attacking tactic was primarily down the left-hand side of the pitch. They continuously overloaded the left side with Danny Rose pushed high, Jan Vertonghen underneath and Dele Alli inside. They were making a clear intention to isolate Fulham’s Denis Odoi and Cyrus Christie.

The overload on the left was wildly successful in freeing up space for crosses into the box. Here we see one-time Manchester United target Rose getting in behind via the overload and serving a dangerous ball in. 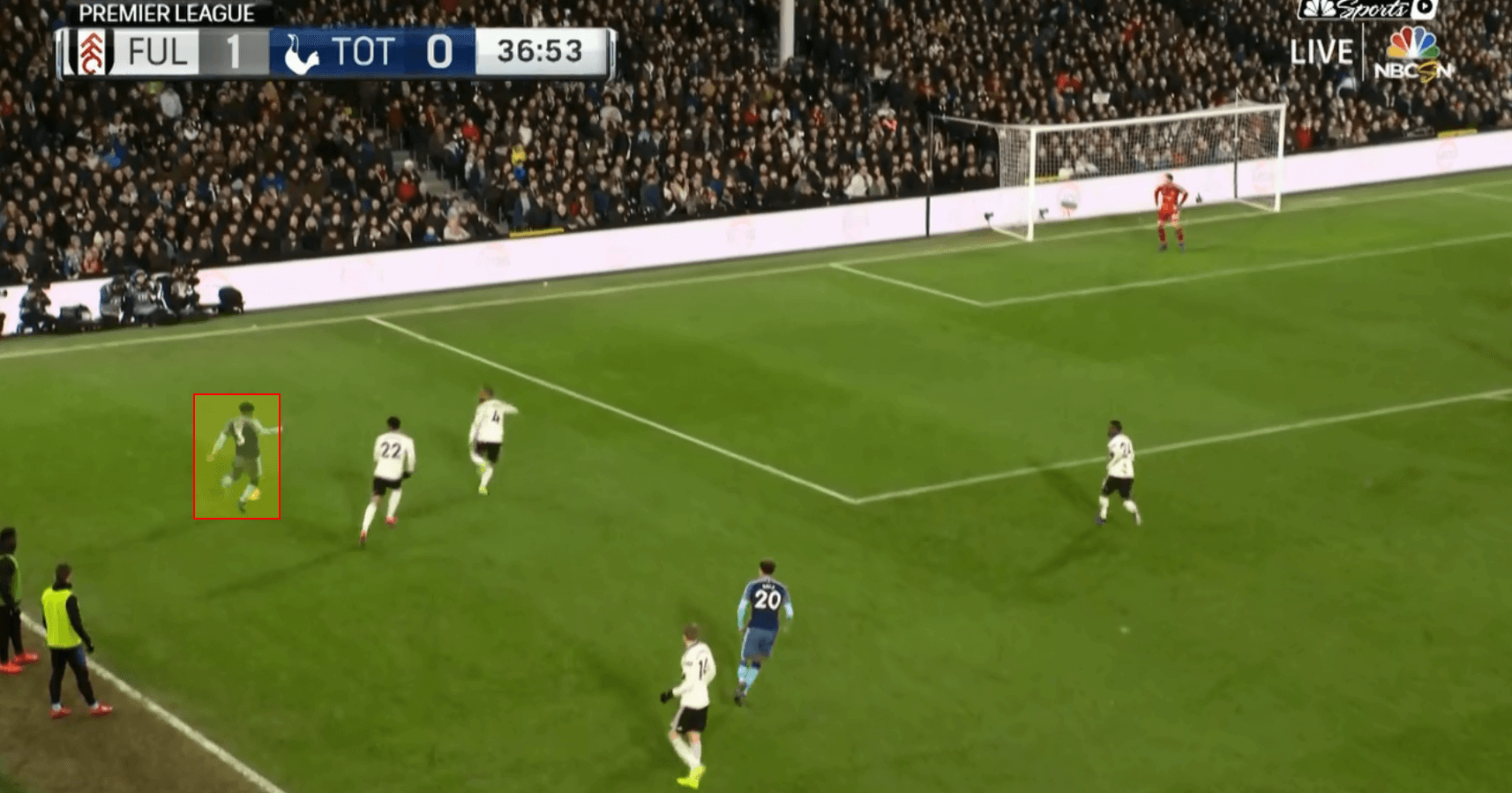 Commitment into the box

Despite the overwhelming number of chances from the left side, the tactic was largely ineffective. Without Son in the lineup, there was not enough commitment from players on the right side to get into the box.

Let’s take another look at the cross from Rose as shown above. There is only one committed runner to get into the box. Fernando Llorente is working hard to get in, but he is the only one.

Both Lamela and Eriksen are highly skilled players, but they both prefer to do their work around the edge of the box. This reluctance to get into the box made it easy on the Fulham defence.

Tottenham’s tactic of using Dele Alli in the build-up on the left to get to a crossing opportunity removed him as a possible target in the box. If Kane had been playing then only getting one runner in would likely have been fine. Llorente is no Harry Kane though, and it is unfair to expect him to be the only target.

Next, let’s look at a first half build-up down the right side. The ball is dropped to Eriksen at the top of the box and we see Alli queuing up at the back post. This occurred early in the game after just seven minutes.

On this occasion, Eriksen decided to hit a shot that was deflected instead of standing the ball up to the back post. Notice the difference in the commitment into the box compared to the attack down the left. This attack of Eriksen on the right and runners committed into the box foreshadowed to the equalising goal.

In the 51st minute, a nearly identical picture emerged: Eriksen with the ball on the right, and Alli queuing up at the back post. 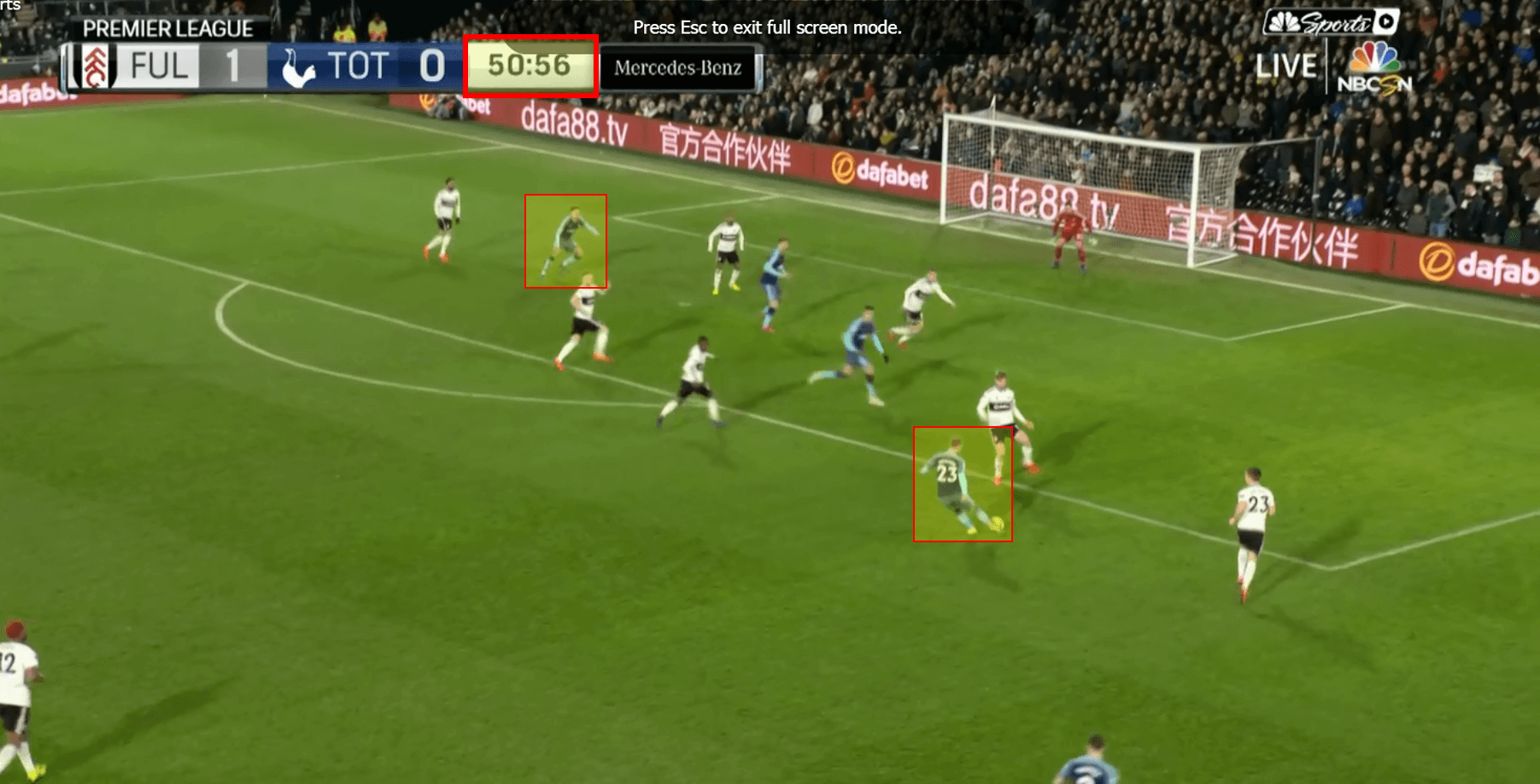 This time Eriksen foregoes the shot and crosses into the back post. The result is a trademark back-post header from Alli.

There was a distinct difference in the commitment of runners in right side attacks compared to left side attacks. This tactical distinction showed how much Son was missed. Son is a willing runner and committed to getting into the box. His is a completely different skill set to that of Lamela and Eriksen.

The 79th minute brought a substitution for Tottenham. With the scored tied at 1-1, Pochettino brought on Eric Dier for Erik Lamela. The tactical change with the substitution released Harry Winks forward into the attack while Dier took up a more supporting position in midfield.

Tottenham now had a willing midfielder to get into the box on the right side of the field. For the winning goal, we see the ball wide on the left side with N’Koudou, and Eriksen in support in his playmaker role. 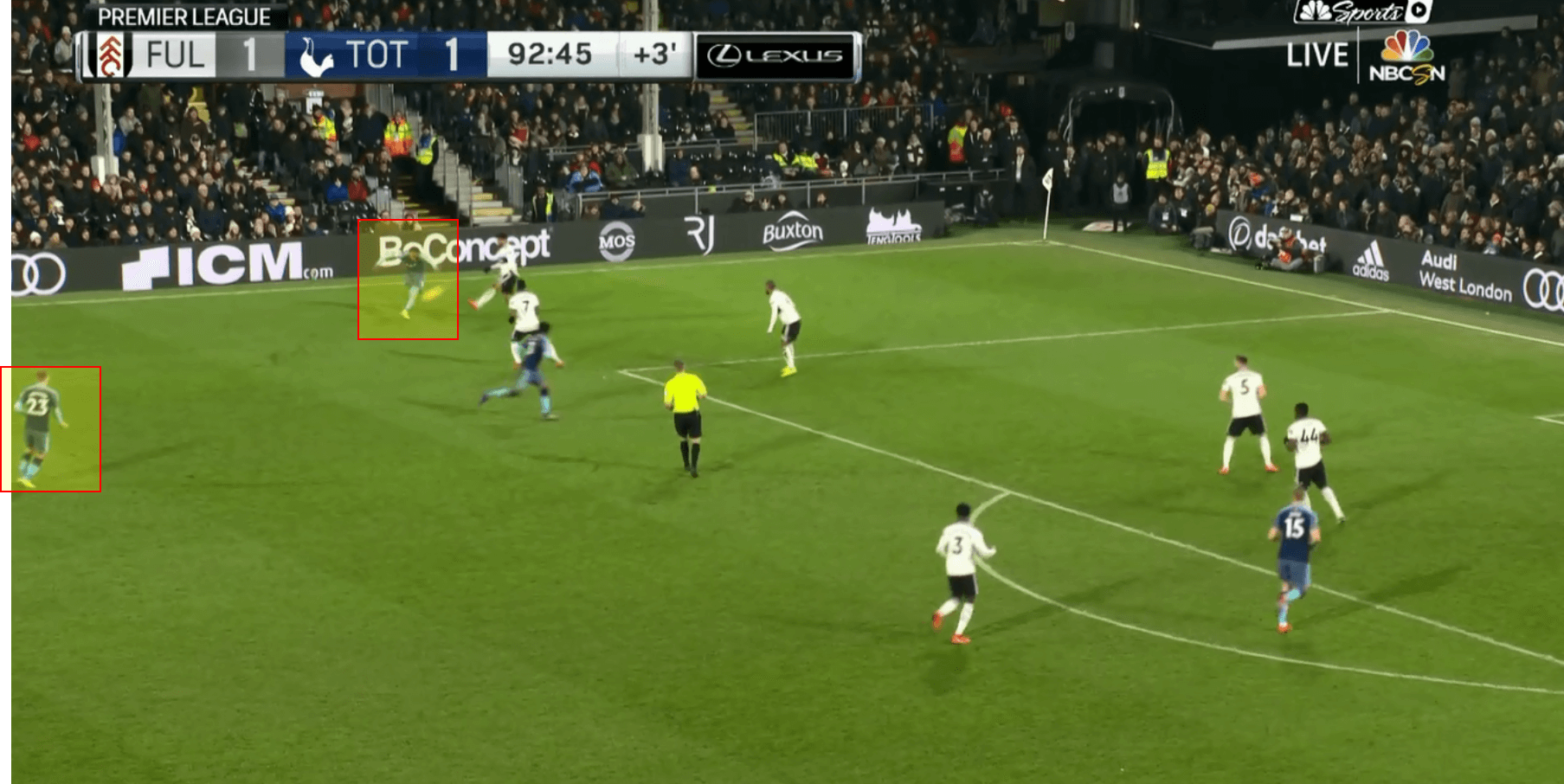 Instead of having right-sided players sitting on the edge of the box, Winks makes a committed run and finds the last-minute winner. 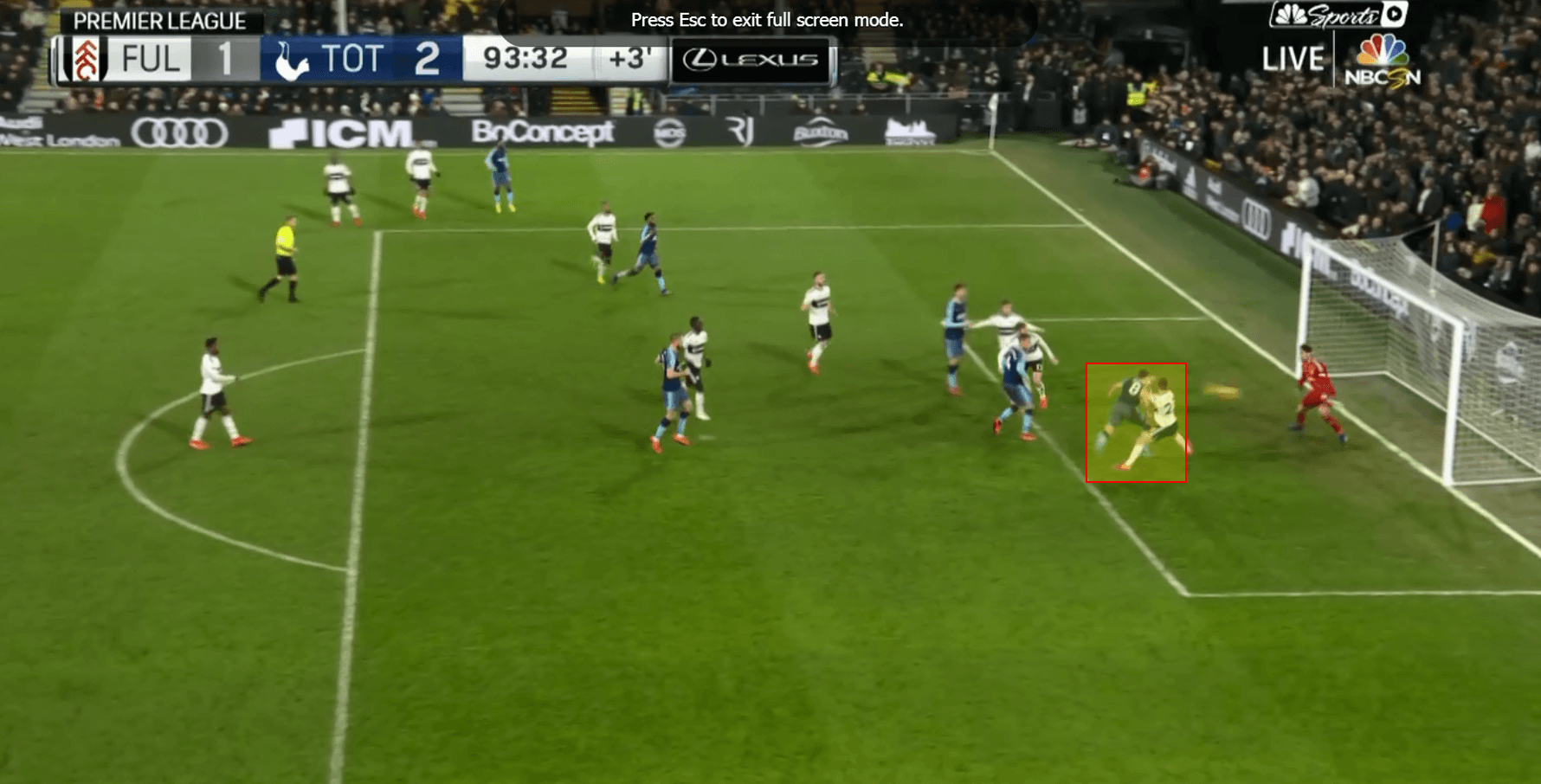 The statistics show a dominating performance by Tottenham over Fulham. Possession was 73% in Tottenham’s favour for the match. Tottenham’s insistence on attacking down the left caused them to convert their massive possession advantage into only five shots on target.

Lamela and Eriksen largely replicated each other by working off the top of the box. If Tottenham were going to be so insistent upon crossing the ball, a better tactic would have been to focus attacks down the right side. Lamela and Eriksen overloading the right with Kieran Trippier would have allowed Alli to make runs into the box on the left. By flipping the tactic, the possession advantage would be better converted to a shot advantage.

Near the end of the match, Alli came off with an injury. This is an awful situation for Tottenham. No Kane, Son, Alli, and Moura will cause Tottenham to struggle mightily if they maintain their commitment to primarily attacking via crossing the ball.