After spending over €400 million on Neymar and Mbappe alone in the past couple of seasons, PSG appear to have their eyes set on winning the Champions League. Despite their expensive pursuit of silverware, the club’s academy players continue to get opportunities in the first team.

Presnel Kimpembe has become an important part of their defence, while Alphonse Areola is a regular between the sticks. Fellow graduates Christopher Nkunku, Stanley N’Soki and Moussa Diaby have also enjoyed lots of game time this season. At 19, Diaby is already showing world-class potential. This tactical analysis will shine a light on his talents.

Having joined PSG at the age of 13, Diaby made his professional debut last season during a six-month loan spell with Serie A side Crotone. The youngster made just two appearances in Italy before heading back to Paris in the summer. New head coach Thomas Tuchel has shown a lot more faith, handing him five starts in Ligue 1 and bringing him off the bench a further seven times.

At international level, he has represented France up to and including under-20 level, where he has recorded three goals in three games. Along with his club mate Yacine Adli, Diaby has been a star of the French youth teams in recent years. He is also eligible to play for Mali.

Perhaps the most notable aspect of his profile, Diaby has the ability to break defensive lines with his dribbling. He regularly uses his pace and close control to bypass defenders on the outside before delivering a cross or a cut-back. Additionally, he is adept at retaining possession in tight spaces, allowing him to resist pressure in central areas.

On average, he completes 6.12 dribbles per game, successfully completing 69.3%. He is confident in his ability to go beyond opponents and engages in 8.86 duels. Thomas Tuchel wants him to be brave on the ball and utilise his skill set to disrupt the organisation of the opposition. Diaby said this following his goal at Orleans.

“The coach told me to play off the two attackers, to try my luck. That’s what I tried to do and it came off.”

Most of his games this term have seen him line up on the wing. However, Tuchel’s fluid system means the 5″7′ Parisian can switch flanks, as well as operate through the midfield at times.

His capacity for taking the ball past opponents regularly sees him arrive in the chance-creating zones. He is adept at playing a weighted pass through the gaps between defenders after finding a way through the centre. Meanwhile, his delivery from wide areas is equally impressive.

The image below illustrates his talent for direct wing-play. Having broken away from two defenders, Diaby has given himself an opportunity to pick out a teammate with a cross to the near post. 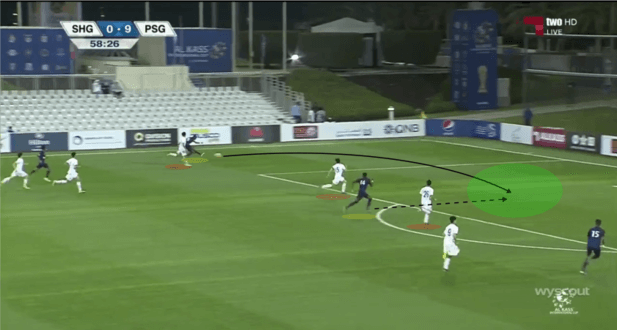 His perfectly weighted delivery meets the run of the striker, who guides the ball into the far corner. This type of scenario is a frequent occurrence for Diaby, who makes 4.74 crosses per game. Whether playing through the middle or out wide, he consistently carries the ball into dangerous positions.

This talent has already helped the first team break down defensive-minded opponents on a number of occasions. His vision, composure, and technical quality allow him to play the right pass more often than not. The dynamic winger has a remarkable five assists in five starts so far in Ligue 1.

Another impressive element of Diaby’s game is his spatial awareness. So comfortable with the ball at his feet, he is able to get his head up to scan the positional play of his teammates and identify where the space is.

On top of his appreciation of space when he has the ball, his movement without the ball is also impressive. He often arrives on the defender’s blind side with late runs to receive at the far post. Meanwhile, he times his runs in behind well and has the pace to get on the end of through balls.

The images below show Diaby receiving to the side of the opponent’s penalty area while moving away from goal. The defenders are drawn towards him in the hope they can prevent him from turning back towards goal. 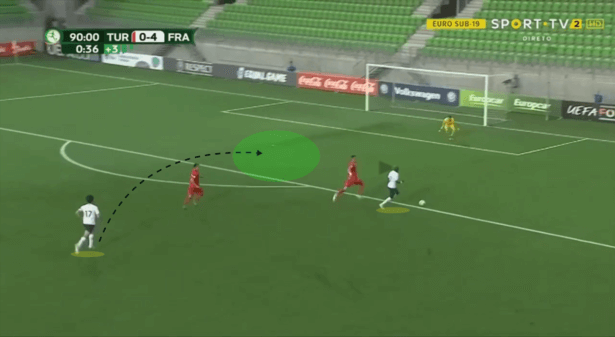 The space now exists in the centre, and he somehow manages to anticipate the arrival of a teammate from out of his line of vision. 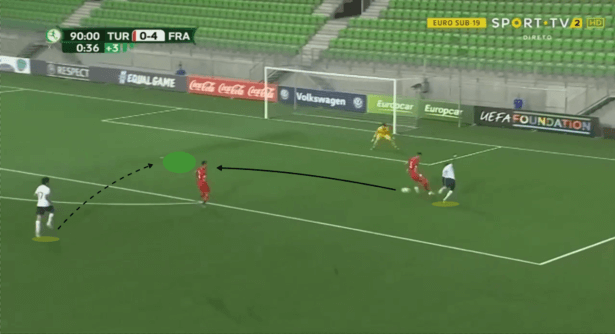 Yacine Adli arrives onto the cut-back before going down under the challenge of the goalkeeper. 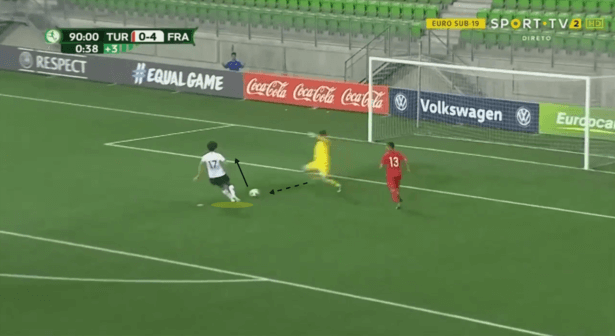 This exceptional level of awareness has been a contributing factor in his impressive assists tally. The xG map below backs this up, showing his assists per 90 minutes almost double his xA90. 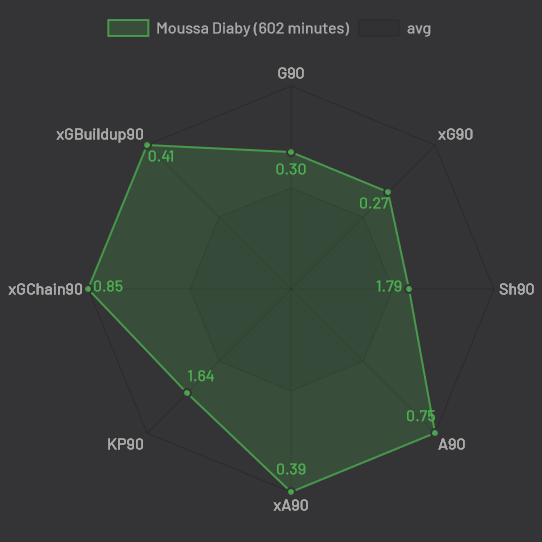 As mentioned, he also has a knack for arriving in space himself. The sequence below shows Edinson Cavani positioned between the central defender and full-back of the opposing team. 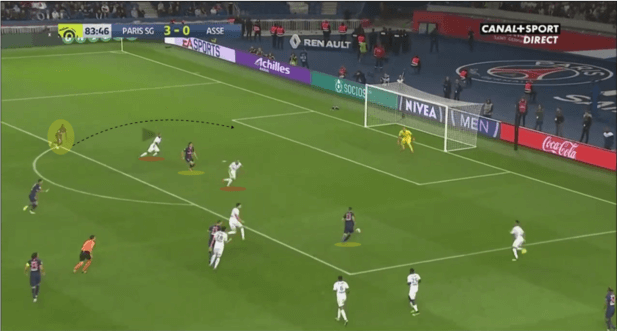 With both players engaged by Cavani’s clever positioning, Diaby must recognise the non-verbal communication from his teammate and position himself on the outside. 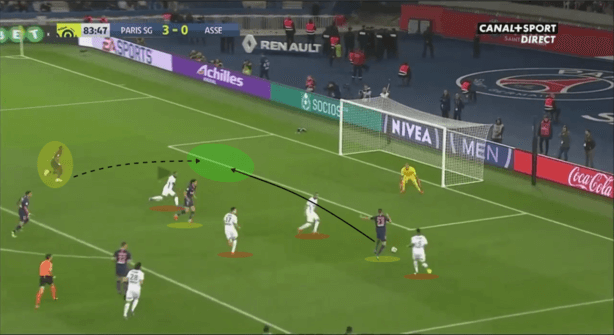 He is intelligent enough to understand the opportunity that this scenario presents, and arrives on the blind side unmarked before calmly finding the back of the net. 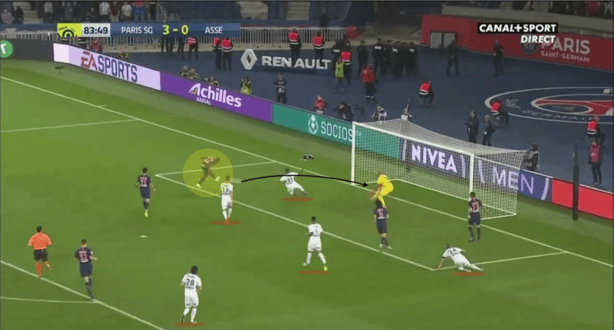 As mentioned already, Diaby has got pace to burn. Coupled with his intelligent movement, he has the ability to exploit the space behind opponent’s last defensive line. In his five league starts, he has recorded two goals. It’s not a bad tally, especially given his lack of experience at first-team level. However, neither strike highlighted his capacity for getting in behind.

His goals at youth level suggest it will become a significant part of his game as his career evolves and he earns enough trust to play further forward. In pre-season, Diaby enjoyed some game time up front and was able to show his potential when through on goal. The images below were taken from PSG’s friendly against Atletico Madrid. Following a turnover, the youngster moves into space to receive on the last line. He times his run well to stay onside. 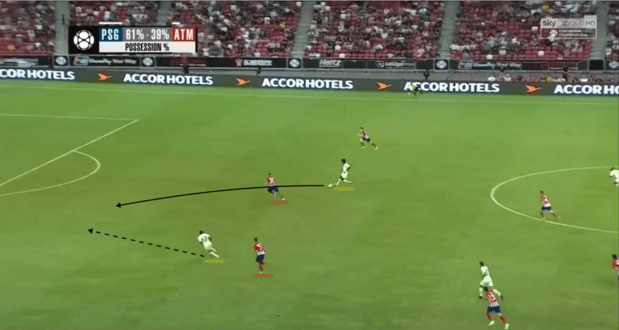 Once in possession, he takes a touch out of his feet before driving low and hard into the bottom corner. His confidence and composure are consistently present when making the final action. 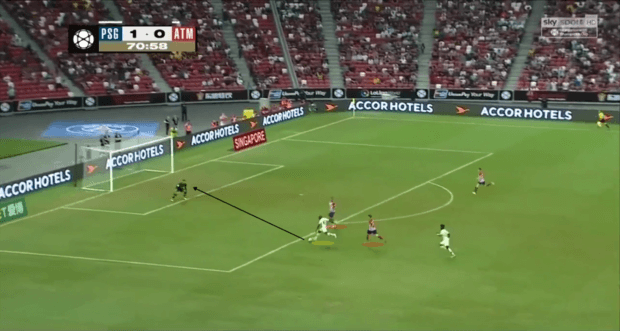 Overall, Diaby is a hugely exciting young talent. His broad skill set make him a valuable player in this PSG squad, even at such a young age. His abilities mean he can vary his play throughout games between bypassing defenders centrally or out wide, as well as stretching the opponents in behind.

With Edinson Cavani and Angel Di Maria both in their 30s, an opening in PSG’s first team may come up over the next couple of seasons. Given his versatility, Moussa Diaby is perhaps best placed to fill any void should the club look internally for replacements. Kylian Mbappe and Barcelona forward Ousmane Dembele are likely to continue getting much of the headlines as France’s latest golden generation begins to take shape. However, Diaby could quietly emerge as one Les Blues’ most important assets.