Napoli scored twice in the first half as well as managing to hit the woodwork three times on their way to an entertaining win 2-1 win against 10-man Lazio. Their 15th win of the season result further cemented their grip on second place in Serie A.

Milik went close twice after his thumping volley hit the woodwork before Lazio shot-stopper Strakosha pushed his header onto the post. The deadlock was broken in an entertaining first half by Callejon when he fired the hosts ahead with his first goal of the season.

Milik got one of his own when he doubled Napoli’s lead just three minutes later to rock Lazio onto their heels. His exquisite free-kick from 24 yards out was as memorable as the first half of entertainment. Since joining Napoli in 2016, Milik has now scored 26 for the club, averaging a goal every 106 minutes. By comparison, Cavani scored every 111 minutes, with Higuain averaging one every 120 minutes.

The entertainment didn’t drop off in the second half either as both teams continued their easy-on-the-eye style of play. The first chance fell to Napoli when Fabian Ruiz thumped his effort off the upright. It was Lazio who pulled one back after Simone Inzaghi’s change of formation though, through ex-Juventus forward Ciro Immobile. Before the game, he had never registered a goal against Napoli. His movement isolated Albiol before his snapshot through the legs of the defender left Alex Meret flat-footed as the ball rolled into the far corner.

With two of the top three teams on show in terms of total number of shots this season – Juventus had taken 349, Napoli 352 and Lazio 339 – the game was bound to serve a treat of attacking football. An incredible 39 shots were taken between the two teams during this encounter, Milik taking more than any other player with seven attempts.

Napoli lined up in their much-discussed 4-4-2 under Ancelotti this season. The Italian prefers the system over his predecessor’s 4-3-3 structure which served so much delight under current Chelsea boss Maurizzo Sarri. Ancelotti had a team selection head-ache with numerous bans and injuries to contend with. Koulibaly, Allan and Insigne were all suspended, while captain Marek Hamsik was out injured.

Although a young line-up, bags of talent was still on show for the Partenopei. Twenty-two-year-old Alex Meret started in goal with a back four of Albiol and Maksimovic in the centre who were flanked by Mario Rui and Malcuit at left and right-back respectively.

The midfield group saw Diawara come into the line-up, with Callejon, Fabian and Zielinski for company, whilst Mertens partnered Milik in attack.

Inzaghi favoured his 3-5-2 formation to start the game, with Strakosha starting in goal and a back three of Radu, Acerbi and Felipe. Milinkovic was partnered with Leiva and Parolo in central midfield with Lukaku and Lulic providing support in wide areas. Immobile started in attack for the visitors with Alberto supporting from a deeper attacking midfield role.

With such a young midfield pairing in Diawara and Fabian, it would be easy to assume that they might be overrun, not just because of their age but simply the numbers which Lazio committed to that area of the field. That assumption was proven wrong by the 21-year-old Diawara and 22-year-old Fabian who registered 87% and 90% pass completion rates respectively. Fabian completed the most passes (79) out of any player on the field.

The balance between Fabian and Diawara allowed for Napoli to utilise wide areas of the field, in particular through Mario Rui at left-back. It was his higher starting position in tandem with the inverted position taken up by Zielinski that led to Napoli attacking the left flank 42% of the time compared to the right flank of 34%.

It was Rui who provided the most crosses for Napoli (four), all of which found their target. The average positions above show that Milik and Mertens worked closely together on the right side of the attacking half. This meant that, along with Callejon, they managed to overload the left side of Lazio’s shape.

This overload allowed space to open up on the left, with the tandem of Zielinski and Rui providing the starting points for attacking moments. The image below demonstrates the relationship which Diawara formed with both Zielinski and Rui, strongly favouring their connections.

Inzaghi adjusts but not quite enough

After watching his team suffer through the first half with only 42% of possession, it was Inzaghi who made adjustments to turn the tables on his hosts as the second half begun. Changes in his team’s structure and personnel allowed better ball retention in the second period.

At least that was the case up to the moment of Acerbi’s red card. His sending off denied him his chance to equal Inter legend Javier Zanetti’s 149 consecutive appearances in their next game. With the change from a 3-5-1-1 in the first half to a 3-4-1-2 in the second half, Lazio turned around possession on Napoli to hold 52% of the ball in the second 45 minutes. 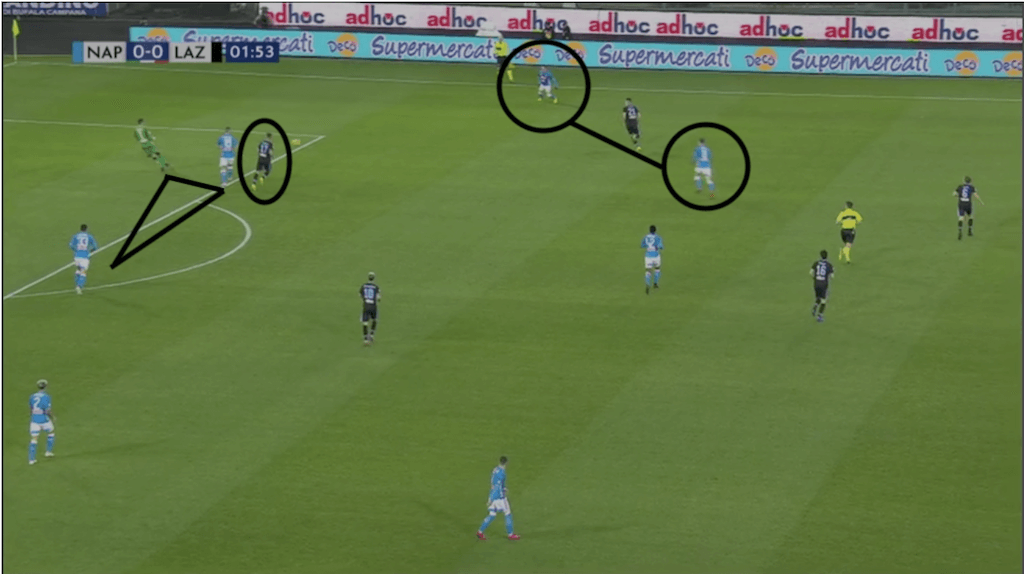 The above image shows how isolated Lazio were in their pressing moments when Napoli played from the back, a trademark of the home team over the past few years. Between the two central defenders and the goalkeeper, they outnumber Lazio’s forwards three to one at this moment. The numerical advantage will still be three to two, even if Immobile becomes better connected with his teammates.

In the wide area, Rui is able to play a one-two with Fabio against the single pressing Lazio defender. He is able to turn and generate an attacking phase.

The two Lazio forwards were better able to deny Napoli’s central defenders time on the ball, disrupting their rhythm and in turn forcing errors of judgment. Their slow build-up play which allowed for the rotations between Zielinski and Rui was put under greater pressure in the second half, allowing for more turnovers in Lazio’s favour.

The image below is a stark contrast to Lazio’s first-half moments in the press. As illustrated, their two forwards are now able to deny Napoli’s centre-back pairing any time on the ball. Together with tighter marking in central midfield, forcing Napoli to play longer passes in the build-out phase, they created uncertainty among the home side. 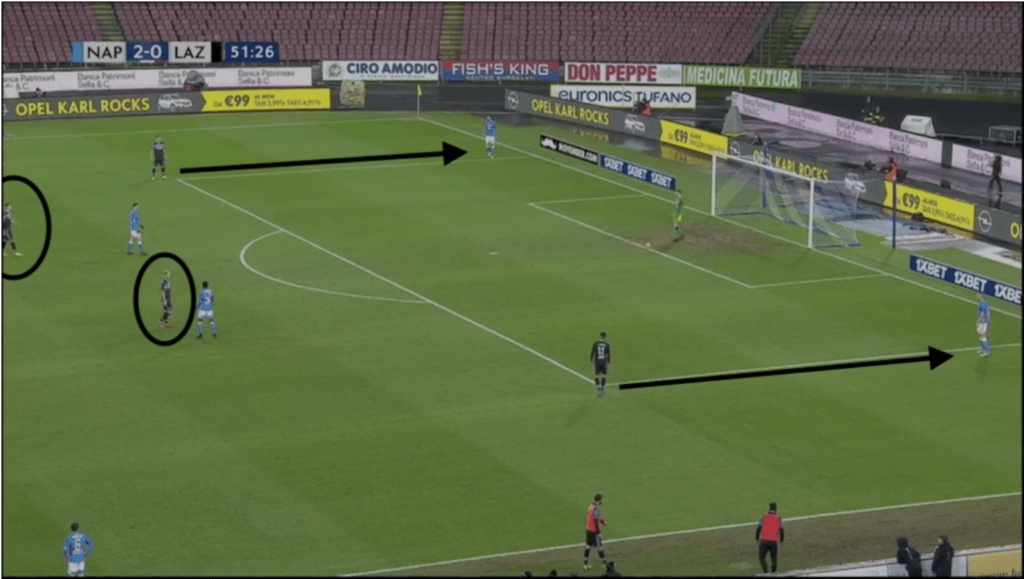 In the first half, Lazio allowed Napoli 6.6 passes per possession on average, compared to the second half when that number dropped to 4.2. This was coupled with Napoli restricting themselves to just 5.03% of long passes in the first half, before playing 10.23% in their second-half passing statistics.

Despite hanging on toward the end of the game against 10-man Lazio, Napoli will be happy to come through this test against a difficult, consuming opponent. The relief in the San Paolo was evident as the final whistle went and Ancelotti can only be proud of his young squad in such circumstances.

He heaped praise on the performance of his young team, in particular Milik after coming through terrible years of injuries. They face AC Milan in their next two games: in Serie A on Saturday, before their Tuesday evening Coppa Italia tie.

Inzaghi’s men will continue to impress with their style of play, but it doesn’t mean he will be happy with their loss at San Paolo. Admitting that Napoli were the better team on the day, he will be hoping for their best performance of the season next weekend when they host unbeaten Juventus in the tight race for European places.