Much was expected of Carlo Ancelotti when he replaced Maurizio Sarri as Napoli head coach this summer. The experienced Italian has overseen some changes to the playing style so far. Despite those changes Napoli have kept getting good results with the highlight being the Champions League win over Liverpool. They were soundly beaten at Juventus, but find themselves just four points behind the Bianconeri in the Serie A table. This tactical analysis looks at how Napoli have played under Ancelotti’s guidance.

Napoli gained plaudits for both their results and style of play under Sarri where they broke their points total over and again. Ancelotti’s work has been to build on the very specific style Sarri implemented and make the necessary tweaks to make Napoli improve. The main change has seen Ancelotti drop the 4-3-3 Sarri used and Carletto started the season with. Instead Ancelotti has moved to a 4-4-2 with the biggest change having been the deployment of Marek Hamsik in a more defensive role and Lorenzo Insigne through the centre as a second striker.

In his autobiography Ancelotti explained why he believes 4-4-2 the best defensive formation there is. He said that he finds it the formation to best cover space vertically as well as horizontally. We’ve seen him use it before; at Real Madrid, Ancelotti largely played 4-3-3 in possession but that changed to a 4-4-2 in defence. It’s hard to say it didn’t work as Real Madrid won the 2014 Champions League.

After starting the season in a 4-3-3 with the same characteristics as Sarri’s 4-3-3, Ancelotti has moved the shape into his preferred 4-4-2. This has dramatically changed the position and role of Marek Hamsik in central midfield. A former number ten, Hamsik played as the left-sided attacking central midfielder in Sarri’s system. With Ancelotti, Hamsik started the season as the defensive midfielder but now plays as one of two central midfielders. This has created a role with a lot more defensive responsibility for the captain. 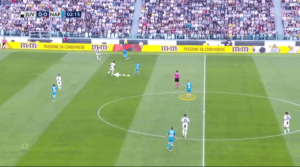 From Sarri’s almost strictly positional defending, Ancelotti mixes a positional with a man-orientated defensive setup. That can be seen above with one midfielder marking and the other defending space.

Against PSG on Wednesday, Ancelotti looked to press quite high but the defending was much more zonal than man-orientated. Instead Napoli tried to keep their front-two tightly connected to the midfield quartet and minimise the space for PSG to build up in. It worked really well as Napoli dominated the first half in Paris. 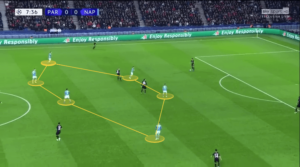 Normally though, the man-orientated approach can often be seen in Napoli’s pressing. The below image is from the Champions League win over Liverpool and shows Napoli man-marking Liverpool’s defenders and deepest midfielders to force Alisson into a long-ball. 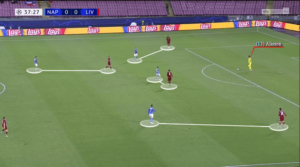 The above image is courtesy of Simon Doyle’s excellent analysis of Napoli-Liverpool.

There have been some issues with Napoli’s defending in certain games, notably in the 3-0 demolition they suffered at Sampdoria and the 3-1 loss at Juventus. Juve in particular managed to exploit their man-orientations and progress past the midfield line. One example is highlighted below. Hamsik (white) is drawn towards Emre Can in possession. Allan should provide cover but is caught in two minds as he’s unsure whether to mark Pjanic in the centre or block the pass to Dybala (yellow). Dybala receives the ball and Napoli’s midfield line has been broken. 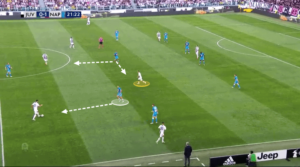 Ancelotti has also changed Napoli’s attacking play. The switch to a 4-4-2 formation has seen Lorenzo Insigne positioned centrally as one of the two forwards. Maurizio Sarri tried Insigne centrally as a number ten when he first joined Napoli and tried to instil his then-favoured 4-3-1-2 formation. It didn’t work, Sarri changed to 4-3-3 and Insigne started playing on the left wing (although still looked to move inside). Now Insigne looks mature enough to play centrally and has started this season brilliantly. His position has been the main change Ancelotti has made in terms of personnel. The other has been the position change of Hamsik as I discussed above.

The 4-4-2 isn’t a rigid shape though as Ancelotti wants at least one of the wide midfielders to come inside. He’s often used Piotr Zielinski and Fabian Ruiz in the left-sided position and Callejon on the right. The Spaniard has often kept width while the opposite wide midfielder has been the one centring. One such example can be seen below. Zielinski has left his wide position and moved into the space between Juventus’ defence and midfield. 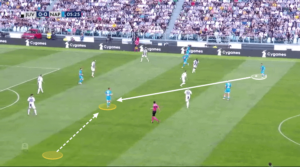 In the games against Liverpool and PSG in the Champions League, Ancelotti has changed the shape to something akin to be a 3-5-2. Given the inverted movement of the left-sided midfielder, the left-back Mario Rui has had an attacking role in every game under Ancelotti but in those two games Ancelotti has used the centre-back Nikola Maksimovic at right-back. This decision has been made to have the Serbian centring in possession and creating a 3-5-2 with the ball.

We can see this below with the back-three, Rui (white) wide on the left, Ruiz (blue) moving inside to become the third central midfielder alongside the duo of Hamsik and Allan. The attacking partnership of Insigne and Mertens often sees the Belgian start higher with Insigne roaming around a bit. 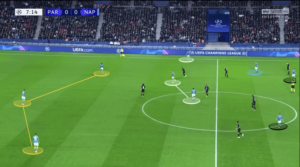 These rotations have made Napoli unpredictable and created a stability to guard against the counter-attacks both Liverpool and PSG are famous for with their devastating front-threes.

Carlo Ancelotti has had a bright start as Napoli coach and has done better than I personally thought. The last two performances in Europe have been superb and in the league Napoli are just four points behind Juventus. Most importantly, Ancelotti has made Napoli more flexible and it’s going to be interesting to see what happens as the season goes on.