Following consecutive relegations, a positive atmosphere is finally returning to the Stadium of light. Sunderland sit 3rd in League 1 at the time of writing, and their young manager Jack Ross has brought exciting, attacking football to Wearside with fans suddenly hopeful for the future.

The Black Cat’s youngsters are also helping to put smiles back on faces, with local lad George Honeyman being given the captain’s armband. Perhaps their most impressive talent, however, 20-year-old striker Josh Maja is leading the way with his goalscoring contribution.

This player analysis will shine a light on the attributes drawing admiring glances from a host of top-flight clubs. With Cardiff City, among others, being linked to the player hoping that he can shoot them up the Premier League table, Maja is a player certain to be featuring in the EPL fixtures in the not too distant future.

After spells at Crystal Palace, Fulham, and Manchester City, Josh Maja signed for Sunderland, a team sitting at the lower bottom of the Premier League Table, in 2015. Initially joining up with the U23 side, he was afforded limited opportunities in his first two seasons at the club.

During their ill-fated campaign in the Championship last term, the striker showed raw talent but failed to hold down a place in the team. His only goal came five minutes into his league debut, against former side Fulham.

In League 1, Maja has found his feet. His tally of 15 goals in 24 games has reportedly attracted interest from Crystal Palace, Everton, and Newcastle. Meanwhile, on the international front he is being lined up for a debut with the Nigerian senior side. Despite being born in London, he is expected to represent the country of his parents and has already trained with the Super Eagles.

Maja’s goalscoring record has been hugely impressive this season, ranking second in the race for the golden boot. His expected goals stands at just eight, meaning he is drastically overperforming. The standard assumption in such an instance is that the player is experiencing a purple patch, and the number will return to normal at some point. However, another explanation is that it’s an inherent part of his game to make goals out of nothing.

Only time will tell if this theory holds true, but there is some evidence to back it up. The centre forward regularly takes the ball in seemingly innocuous situations, before creating space for a shot and releasing the effort quickly.

The images below highlight his ability to engineer his own chances. He receives just inside a crowded penalty box with his back to goal. In these scenarios, most strikers would look to lay it back to a teammate or feed the wide areas. 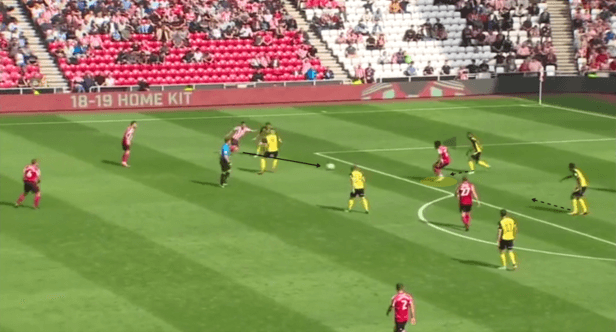 Instead, Maja’s instinct is to find a way to get a shot on goal. He takes a touch to the side, before striking low and hard into the bottom corner. Had he held onto the ball any longer, three defenders were ready to close him down. His capacity to shift the ball quickly and set himself to shoot helps him to be effective with limited time and space. 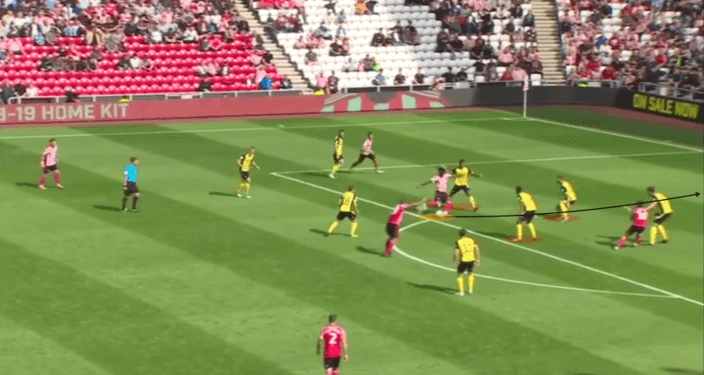 This type of goal has been a regular occurrence for the youngster this term. His positive mentality means he backs himself to score, provided he can create even the slightest opening to shoot through.

As stated, it remains to be seen if his xG numbers represent anything more than a good run of form. Furthermore, it will be interesting to see if he can apply the same approach to self-made opportunities at a higher level. Links to Celtic are interesting, and it may represent a more appropriate progression for his career.

Maja’s movement to find space in the attacking third is also noteworthy. He times his runs in behind well and has the pace to get on the end of through balls. He has the intelligence to identify space and arrive there at the last moment before receiving.

The images below illustrate this talent. Maja sees where the space is and runs across his man just as his teammate plays the pass. 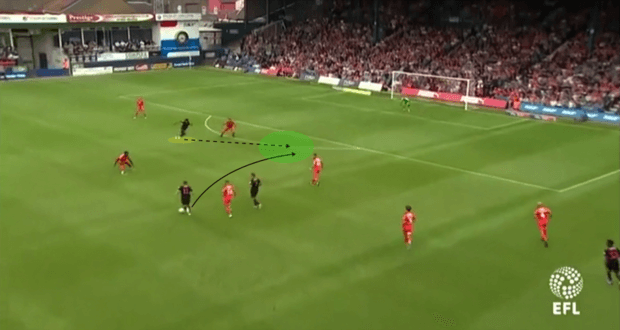 Having received in the box, the striker takes a touch away from the defender before driving a shot into the far bottom corner. He has a tendency to create space through clever movement and knows that running too early could kill the space. His late runs in behind are a common feature of his game. His pace helps him lose the defender completely, who decides to try and cover the far corner instead. 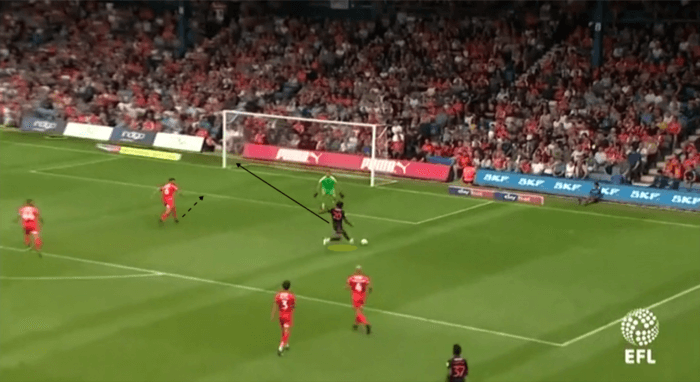 Further to his ability to create gaps for his own benefit, Maja’s spatial awareness also helps him pick out teammates in dangerous positions. He often makes decoy movements into wide areas in order to drag defenders away from the centre.

Meanwhile, he is also good at recognising the positional play of those around him, leading to clever flick-ons and through balls. The 5″11′ forward has two assists so far this season. The image below shows him running across the 18-yard line to receive from the midfield. 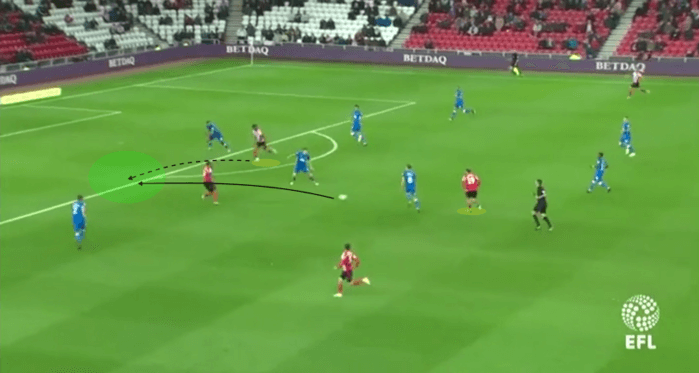 When the ball arrives, Maja is moving away from goal with a defender blocking off any chance to shoot. Recognising that his teammate is arriving in the space behind him, he plays a quick backheel. The receiver puts his chance wide, but it represents another example of Maja’s quick thinking in the final third. While his link-up play is at times excellent, it remains the element of his game with the most room for improvement.

Thanks to his intelligent movement and aerial ability, Maja is also a big threat from crosses. He frequently moves on the blind side of defenders in the box, either to get on the end of a lofted delivery or to arrive at the near post at the last second.

The sequence below shows him moving out of the centre-back’s line of vision as the winger prepares to cross. The near post is covered on this occasion and the 20-year-old predicts where the ball will be played. 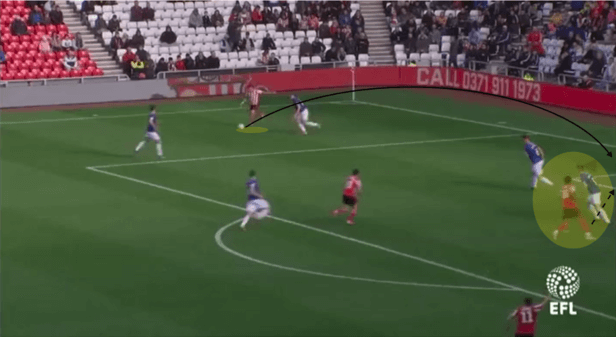 The winger picks Maja out in the centre, six yards out from goal. His clever movement means he can head into the bottom corner uncontested. 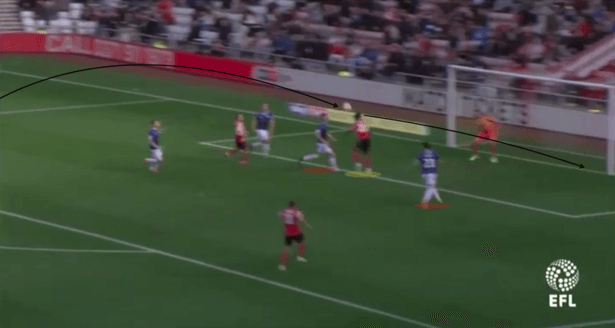 Overall, he is one of the most impressive young players in the EFL. His movement is highly intelligent, his finishing has been exceptional this season, and he has the ability to create his own chances. It’s little surprise to see so many clubs chasing his signature this month.

Having recently rejected Sunderland’s offer of a new contract, Josh Maja’s future is far from certain. His current deal expires at the end of the season and rumours suggest a transfer is imminent. Should he move in this window, he’s likely to remain on loan at the Stadium of Light for the rest of the season. Whatever the next six months have in store, Maja has the potential to forge a career in one of Europe’s top leagues.