LOSC Lille have started the 2020/21 league campaign surprisingly well. They currently sit second, just two points behind PSG. Their strong start after 12 games has been mainly down to their defensive solidity. Perhaps the most important player in this defence is French goalkeeper Mike Maignan. The 25-year-old has been tipped to replace current France and Tottenham number one, Hugo Lloris. Maignan has recently won his first French cap and is certainly on track to become one of the best goalkeepers in the world.

This tactical analysis will look at why the young goalkeeper has received such high praise, and what he needs to improve on to move his game to the next level. We will look at why he is such an effective shot-stopper and how he is able to help his team in defence. We will also use stats to compare him to other goalkeepers in Europe’s top five leagues to put his performances into context.

Maignan is very similar to Atlético Madrid’s Jan Oblak in his saving style. Both have very good positional sense, meaning because they’re in the best position to make a save, they very rarely need to make a significant movement to make a save. But how does he compare to other goalkeepers this season? 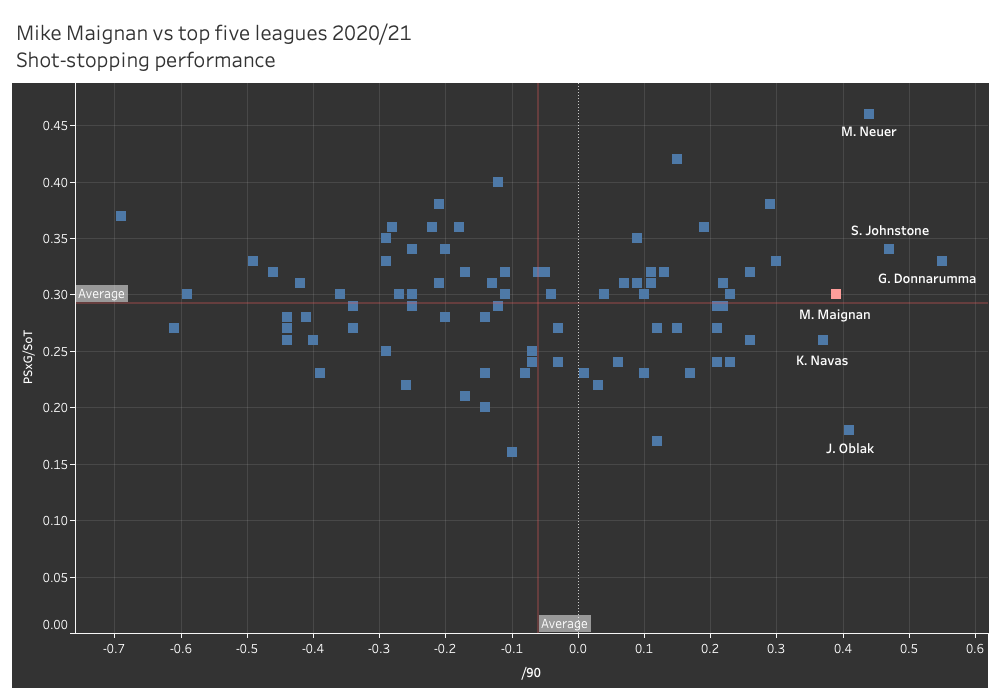 The above graph looks at the average shot difficulty that each keeper faces and how many goals they prevent above/below expected per 90 minutes. We’ve labelled the best performers.

As we can see, Maignan is above average in both stats. He has a PS xG per shot on target value of 0.3 meaning he faces fairly tough shots, although not many. He also saves a large percentage of these shots, saving 0.39 goals per 90 above expected. Maignan has been one of the best performing goalkeepers this season. But why Maignan been so good?

Although his team’s defence does help, facing just 2.87 shots per 90, he is very effective at dealing with these chances. He uses a combination of his reflexes and positioning to make good saves.

Above is an example of how Maignan’s positioning helps him make good chances seem like simple saves. A cross is powered across goal and Valencia’s striker gets a toe to it. Because Maignan has read the danger and positioned himself in the best possible position, he is able to save the shot with a small movement. This is a great example of how the keeper is able to anticipate possible danger before it arises.

Here, in the Europa League, we can see how Maignan uses his footwork and awareness to adjust his position on the goal line. Before the ball is crossed in, the French keeper is guarding his near post. But as the player shoots the ball, he is guarding his other post. Maignan’s position means that he’s protecting the majority of the goal, meaning the shot will likely be close to his body. He does well to backpedal onto his line to maximize his reaction time.

His decision-making skills mean that his ability during one-on-ones is very impressive. Very rarely does he fail to choose the optimum one-on-one approach.

Maignan is very patient during one-on-one situations. He often only commits a short way of his line. Against Kylian Mbappé, he forces the striker to make a decision, rather than rush out. Because the striker isn’t under any sort of pressure here, Maignan needs to stand tall for as long as he can. As Mbappé is about to hit the ball, the keeper spreads himself and stops the shot. He remained as big as possible, meaning that Mbappé’s shot would have to be a great one to beat him.

Confidence coming off his line

Maignan is one of the most dynamic goalkeepers currently in world football. His pace, power, and frame mean that he’s able to dominate his box very effectively. This not only takes the pressure off his defence but helps him start counter-attacks. However, the 25-year-old can often get carried away and make risky attempts to win the ball when there’s no need.

The Frenchman is very confident off his line, not fearing colliding with other players. In this example, we can see how far he comes off his line to help his defence get rid of the danger. He comes sprinting off his line giving a loud call to intimidate the attackers. He gets up above teammates and opposition to claim the ball cleanly. But how does he compare to the rest of Europe? 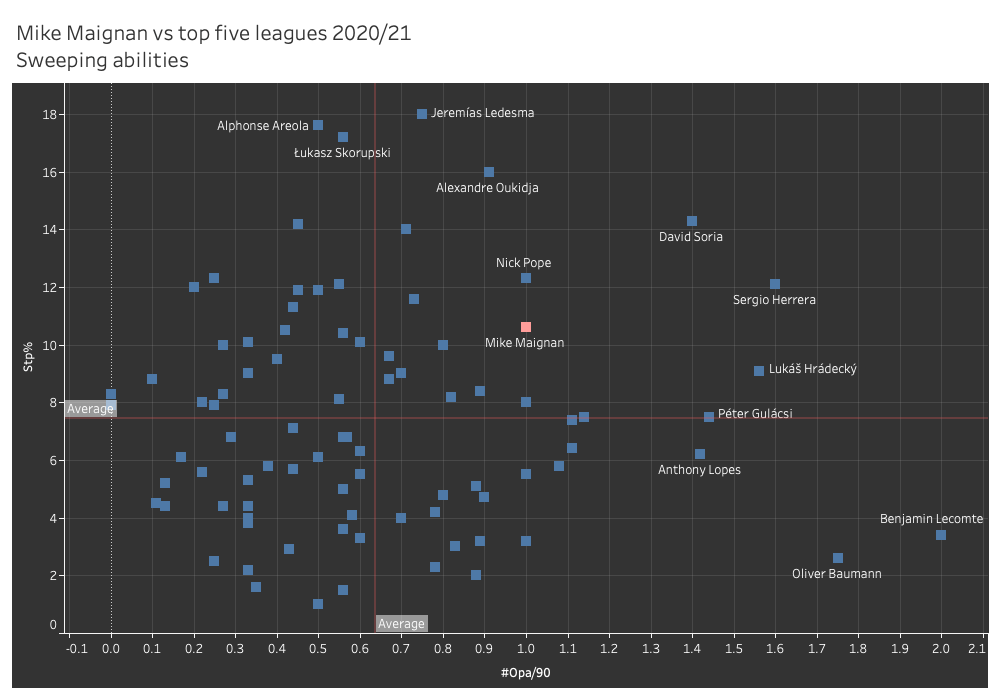 Similar to the other graph, Maignan is above-average in both stats. The Frenchman makes one defensive action outside of his penalty area per 90, and he’s stopped 10.6% of crosses he’s faced this season. These stats compared to the top five leagues show just how good Maignan is at claiming crosses and sweeping.

He is extremely aggressive when it comes to dealing with loose balls in and around his box. This can sometimes be very effective, but also very risky. If Maignan is to move to the next level, he needs to control when to use these aggressive approaches, but this will come with experience.

This is a perfect example of how Maignan being very aggressive helps his team out massively. Against a Rennes counter-attack, there is an unmarked man at the back post. A pinpoint cross is delivered into the box and is destined for the unmarked man. The keeper recognises this and attacks the space between crosser and receiver. Maignan dives towards the ball tipping it away from the attacker. If he didn’t intercept this ball, it would have given the attacker a better chance at scoring.

However, there are points where he can be too aggressive in situations where he doesn’t need to be. Like in the example below.

Here we can see how Maignan can sometimes be too aggressive and do more bad than good. With Lille’s defensive tactics, rarely is there a need for him to leave his box. Even though in this scenario he makes an effective tackle, it could easily go wrong. As we can see in the first image, there are two teammates in a better position than him to retrieve the ball. However, the Frenchman decides to use his pace to run out of his box when the ball is going away from goal. He makes a rather dangerous tackle that could have put the player in danger.

Maignan has an xGChain of 2.71, meaning the counter-attacks he starts sometimes result in high xG chances for his teammates. His strong ability to claim balls from crosses and corners mean that he regularly gets a good chance to start good attacks. He is excellent with both throws and long accurate kicks.

In this example, after claiming a cross, he immediately runs to the edge of his box looking to start an attack. He throws the ball downwards onto the floor with some spin to make it travel faster. This technique is more effective than an overarm or underarm throw as it reaches the attacker at the right pace.

When there aren’t any effective quick option near to him, he is more than comfortable kicking the ball long out of his hand. Here, he identifies that he has a teammate in heaps of space on the right. His kick is accurate enough to find, starting an attack.

The scout report has shown that Maignan is one of the best up-and-coming goalkeepers in world football. As we have seen from the graphs, he is currently one of the best performing keepers in Europe, and with experience, he will only improve. The analysis pointed out that he has incredible positioning and anticipation meaning that he rarely has to make significant movements to make a save. He is also very effective at coming off his line to stop dangerous crosses and opportunities. This then puts him on the front foot to begin attacks for his team. Maignan would be a great transfer at the end of the current season.