Fulham’s 2020/21 Premier League campaign was a disappointment, given another strong Championship promotion followed by an instant relegation from the Premier League back into English football’s second tier. However, at least this one and done season wasn’t accompanied by the eye-watering transfer market spend that had preceded their previous Premier League stay. Whilst there were incomings, there weren’t any big money singings. One of their more prudent deals came in the form of Alphonse Areola on a season-long loan from Paris Saint-Germain. The French goalkeeper had been a backup option between the sticks for the Parisians, and arrived in West London to some raised eyebrows, but little to no fanfare. However, Areola would go on to have a particularly impressive season for Fulham, with the West London side finishing 18th, but conceding only 53 goals, an amount lower than six other sides. The frenchman averaged 0.22 prevented goals per 90, the seventh highest amount in the league of any goalkeeper, conceding 48 goals in 36 league games, 42 from open play. He conceded 1.24 goals per 90, a lower amount than 10 other goalkeepers in the league. This tactical analysis and scout report will look at Areola’s various qualities, giving an analysis on what West Ham, and perhaps even France, can expect from him.

Areola is highly composed under pressure, and this isn’t some false confidence. His first touch stays close, which can give the appearance of it getting stuck under his feet when he has space, but it has its benefits when under intense pressure. He disguises his intentions, and will cut back on himself, just as the example in the following image demonstrates. He expects those around him to be just as press resistant, and will play short passes to teammates who are being closely marked themselves. This is undoubtedly a risky approach, but Areola is prepared to receive the ball back himself, and his confidence in playing this kind of pass is replicated in his confidence in receiving this kind of pass himself, too. 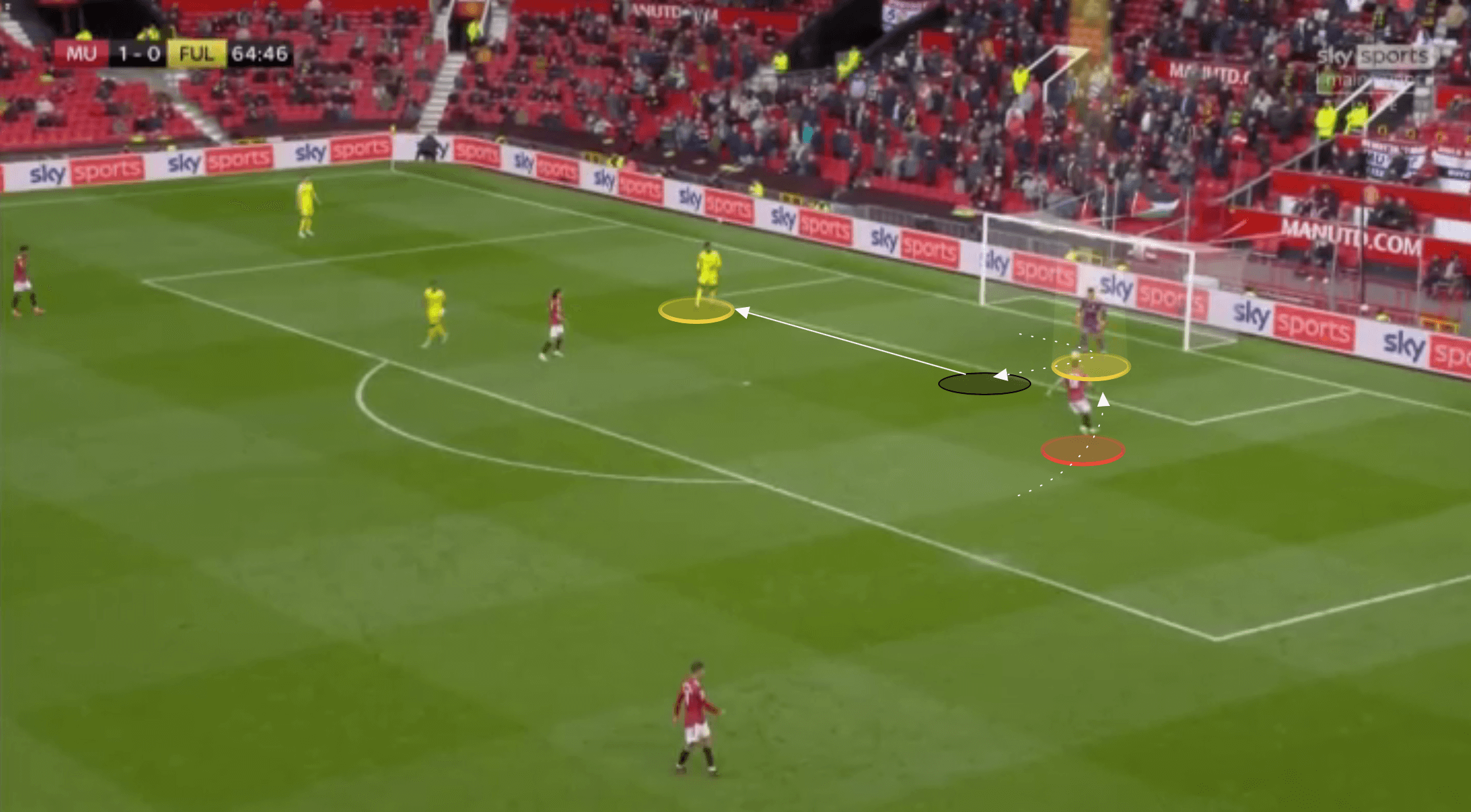 Areola won’t just look to clear the ball when under pressure either. If he believes there is a legitimate passing option on, he is confident taking on this pass, and plays these passes with the requisite weight and accuracy.

In the following image, he shifts across well out of his goal to give a short pass option to his teammate in possession. Some keepers may well offer in this moment, but generally just enough to receive and clear the ball long.

Instead, he scans before receiving and sees that his left-sided defender is off limits, due to the oncoming press of the Southampton attacker. He has the composure to see the pass option on the edge of his own box, and despite being pressed heavily, finds his teammate. 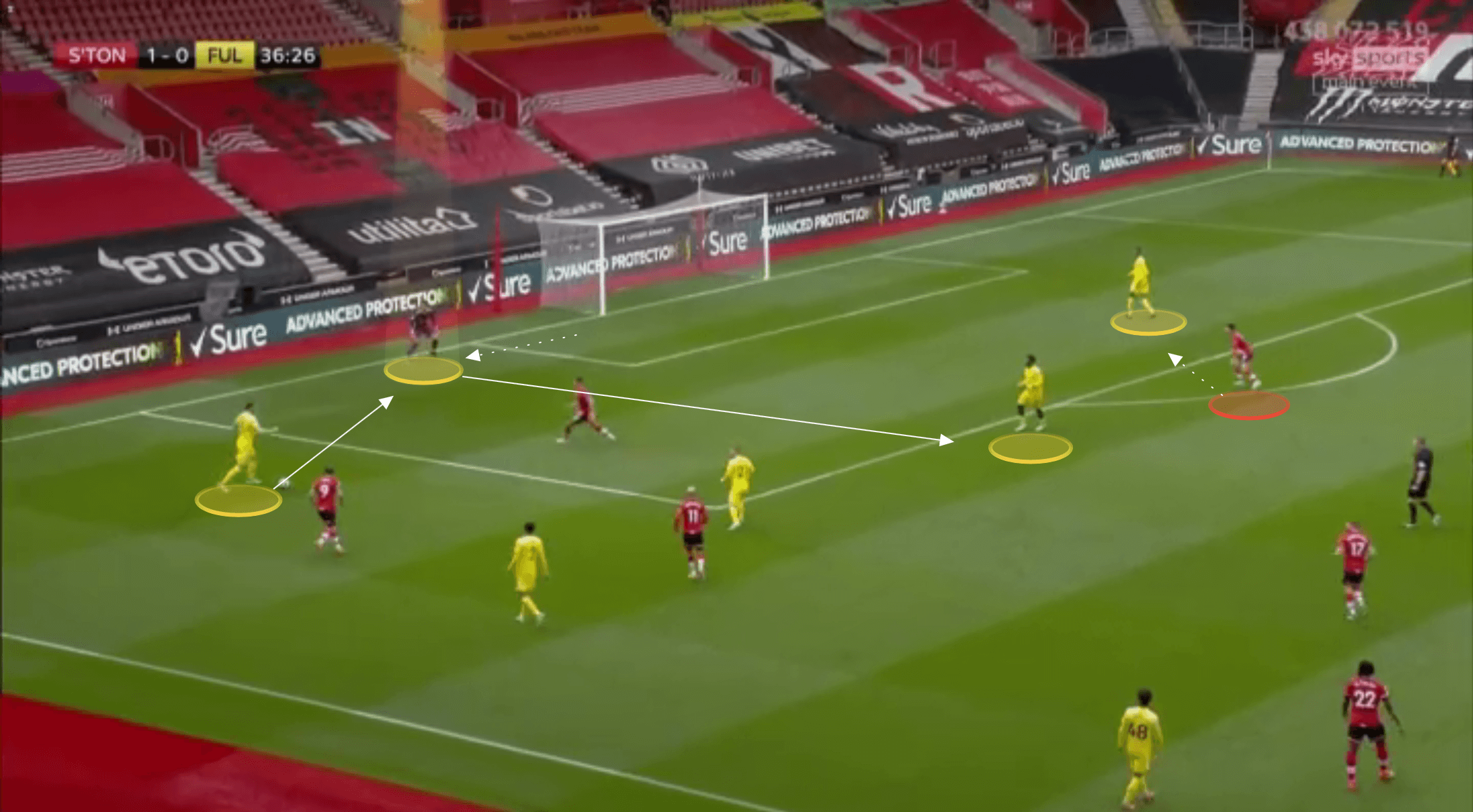 Areola will still clear the ball and his assessment of danger is generally of a good quality. However, even as he clears the ball, he still looks to find a teammate. It’s rare to see Areola merely swat a ball away, and even though he plays few long passes, those he does play are often shorter than many of his league counterparts, as he looks to find the feet of a further forward teammate. 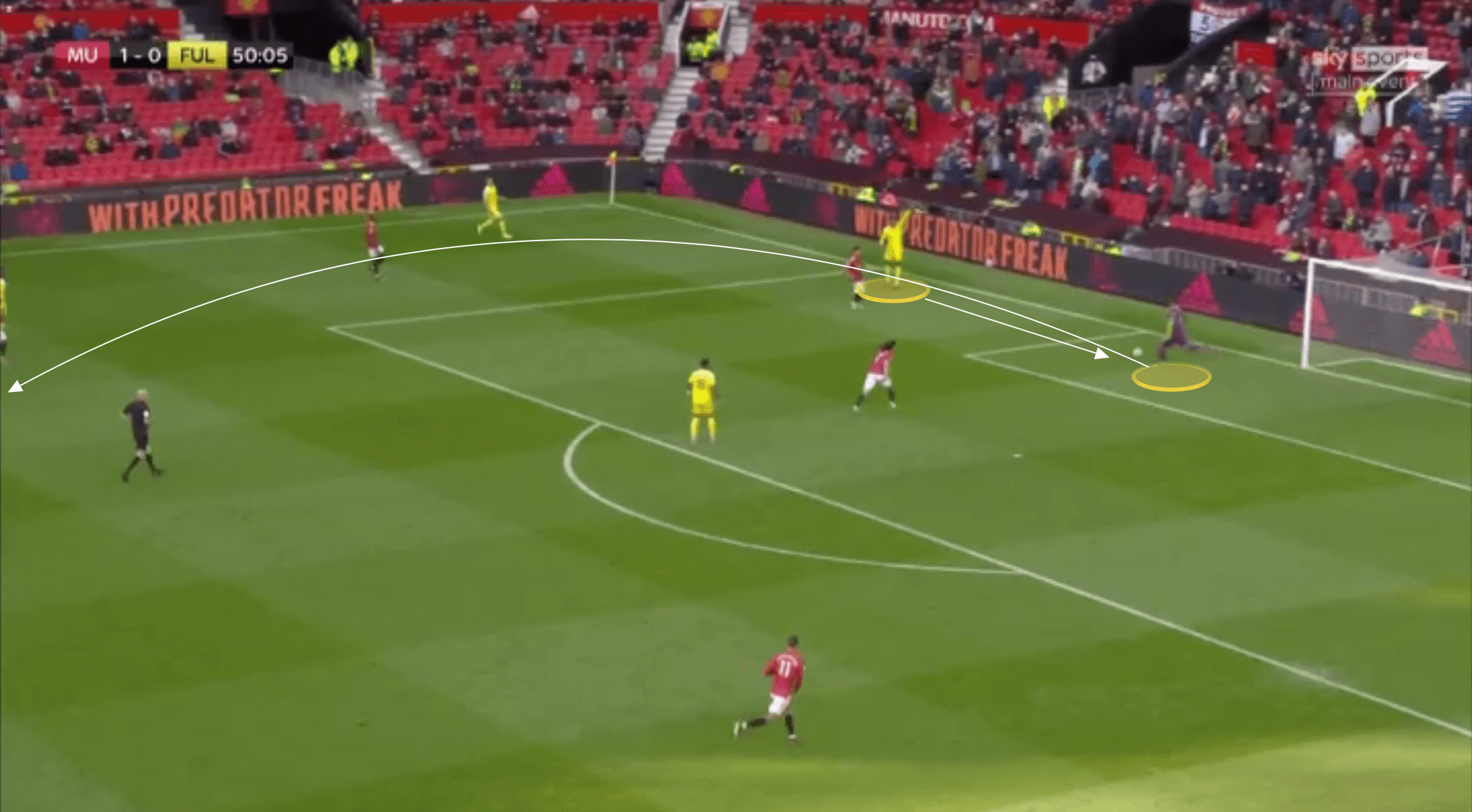 The example shown in the previous image, and the next one, show him managing to pick out a player 35 yards out from his own goal with a lofted pass. The receiver has a teammate in close support, and this pass from Areola is on the riskier side, but he nevertheless finds a player who can secure possession beyond the line of press, and this was a great outcome for Fulham in this situation. 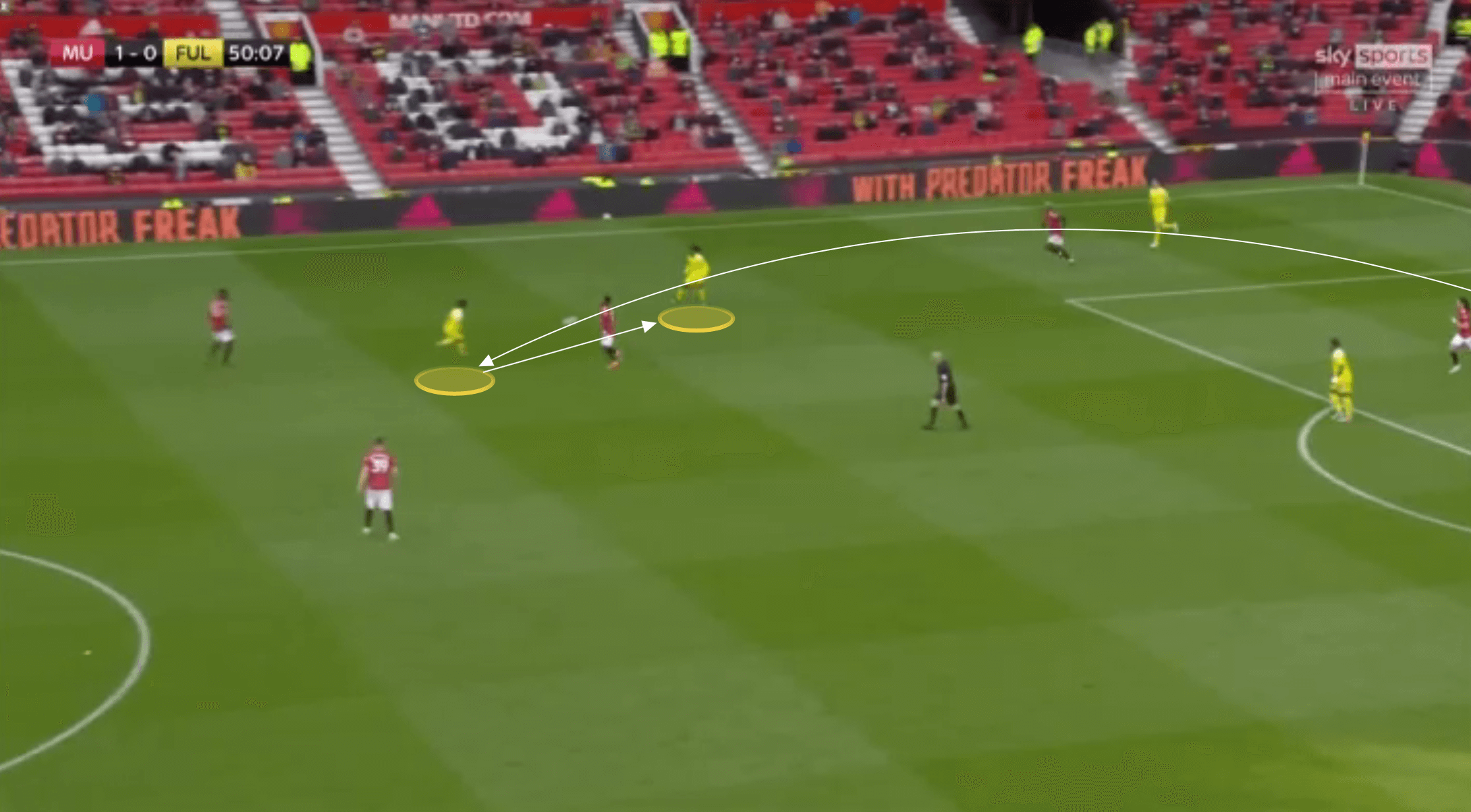 With the ball in the opposition half, Areola will push far forward. He is an option to play to with a quick backpass, and he will dutifully recycle possession with a good tempo himself. After playing a pass, he will then drop off to provide another back pass option, often looking to keep a healthy distance from his defenders where he can give this opportunity to pass to him, without giving too much space to cover on a loss of possession. 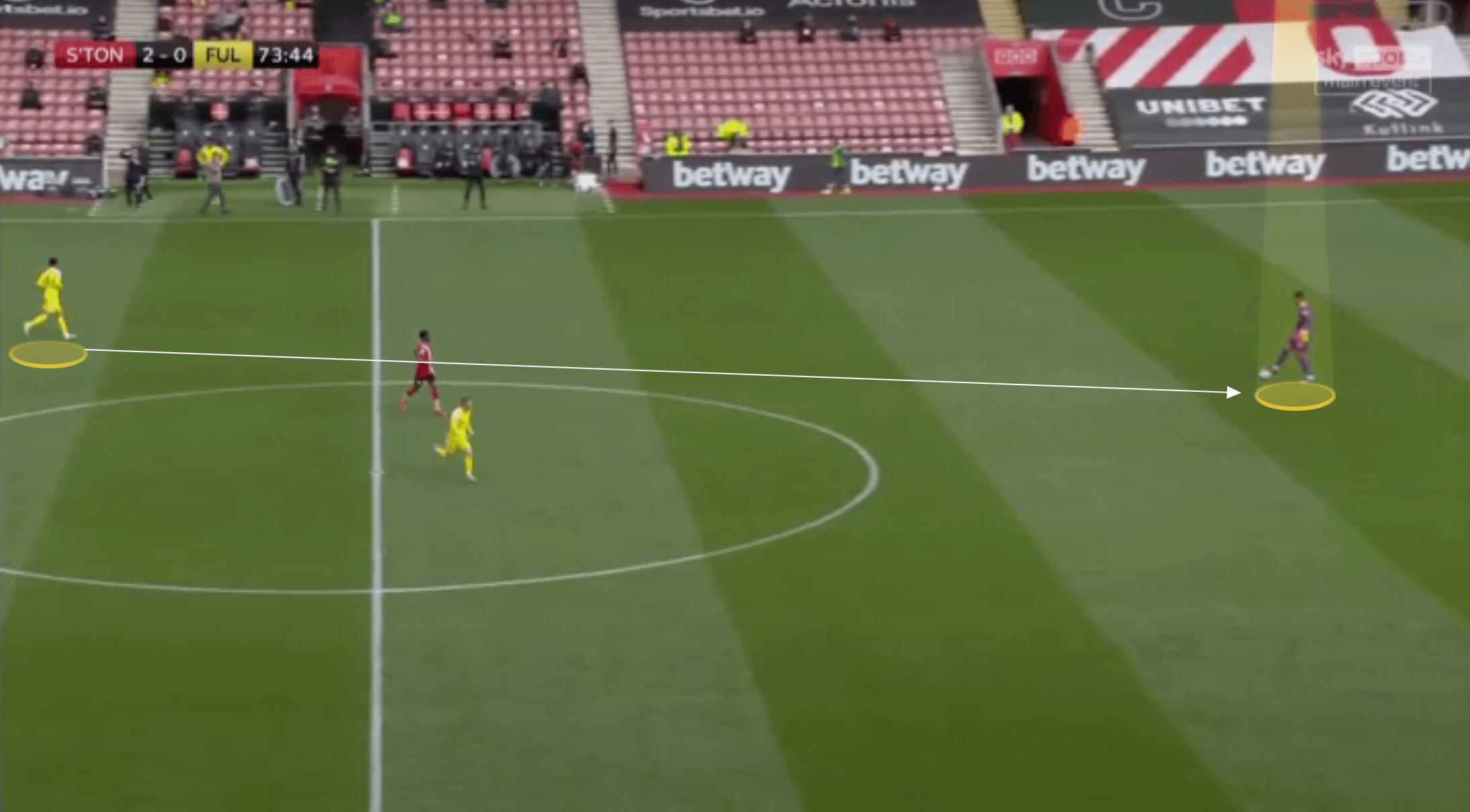 Areola will sweep from this position too, thwarting any long clearances from the opposition and instantly recycling the ball to ensure any relief the opposition enjoy from the clearance is short lived.

The only time he was caught out with this high positioning came in the 1-1 draw with Manchester United at the end of last season.

Areola is explosive with his shot-stopping, showing an outstanding ability to change direction and get across his line. He is tall, standing at 1.95m and as such his full extension as he dives covers some distance.

In the following image we can see his starting position as a clean connection is made towards goal from the corner. 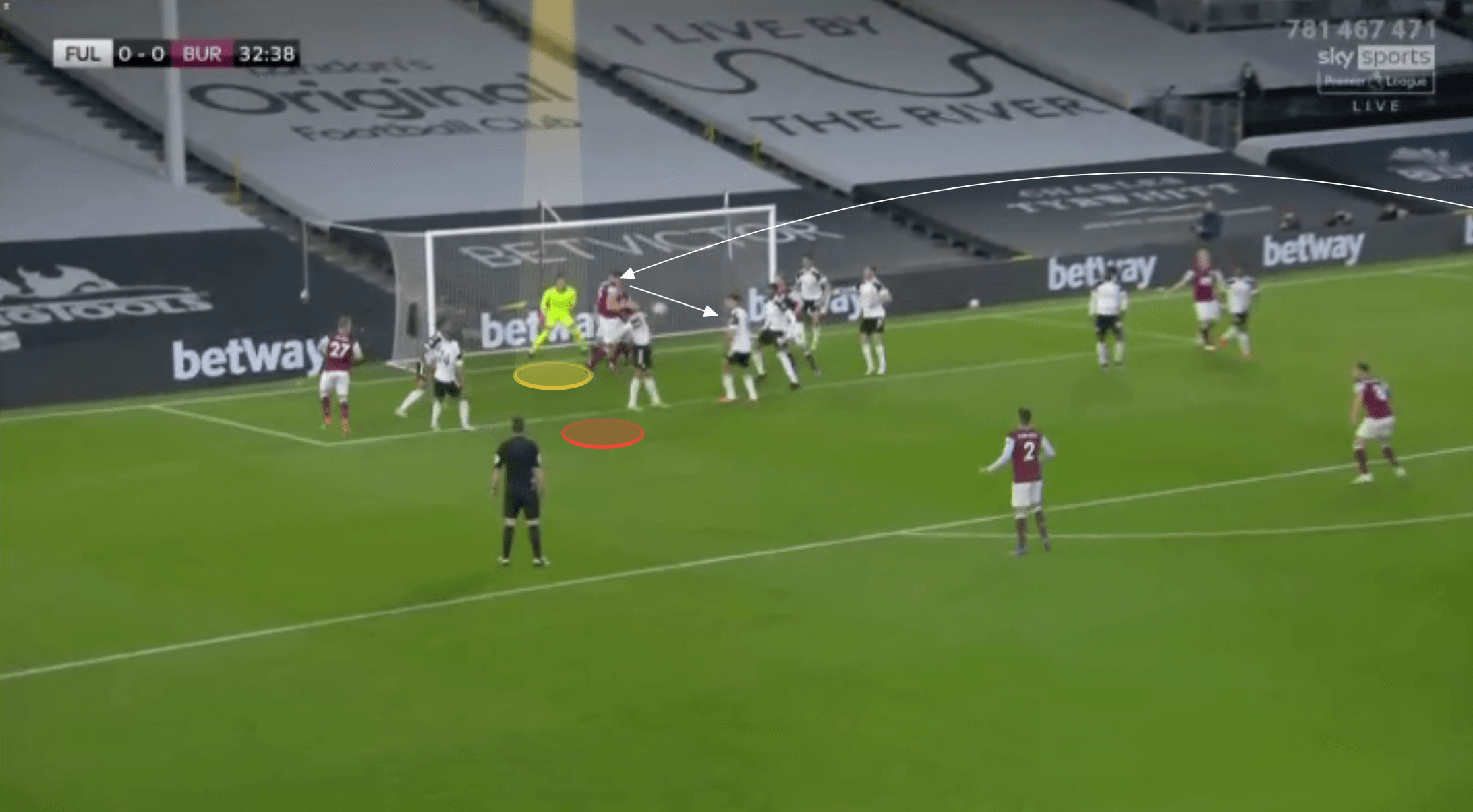 Despite a starting position in between the front post and the centre of the goal, Areola was still able to show a quick reaction and propel himself across his goal to the other side, where he was able to tip the ball around the post, saving a certain goal. 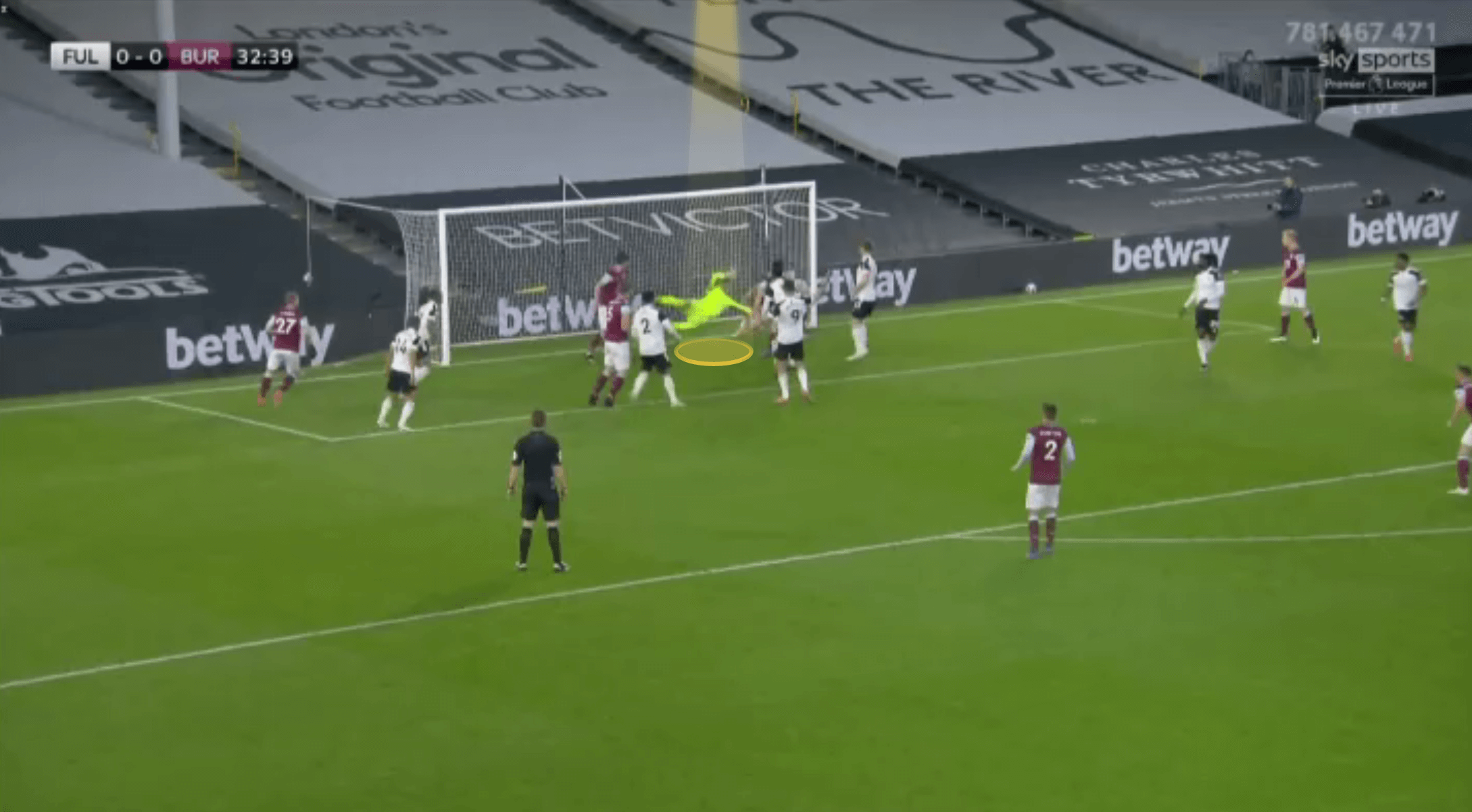 Something similar can be seen in the next example. With Werner through on goal, Areola’s position could be a touch more towards his front post if anything, but his distance from his goal has closed the angle for the German forward to score from. Areola’s feet are close together, ready to explode either way depending on the shot. 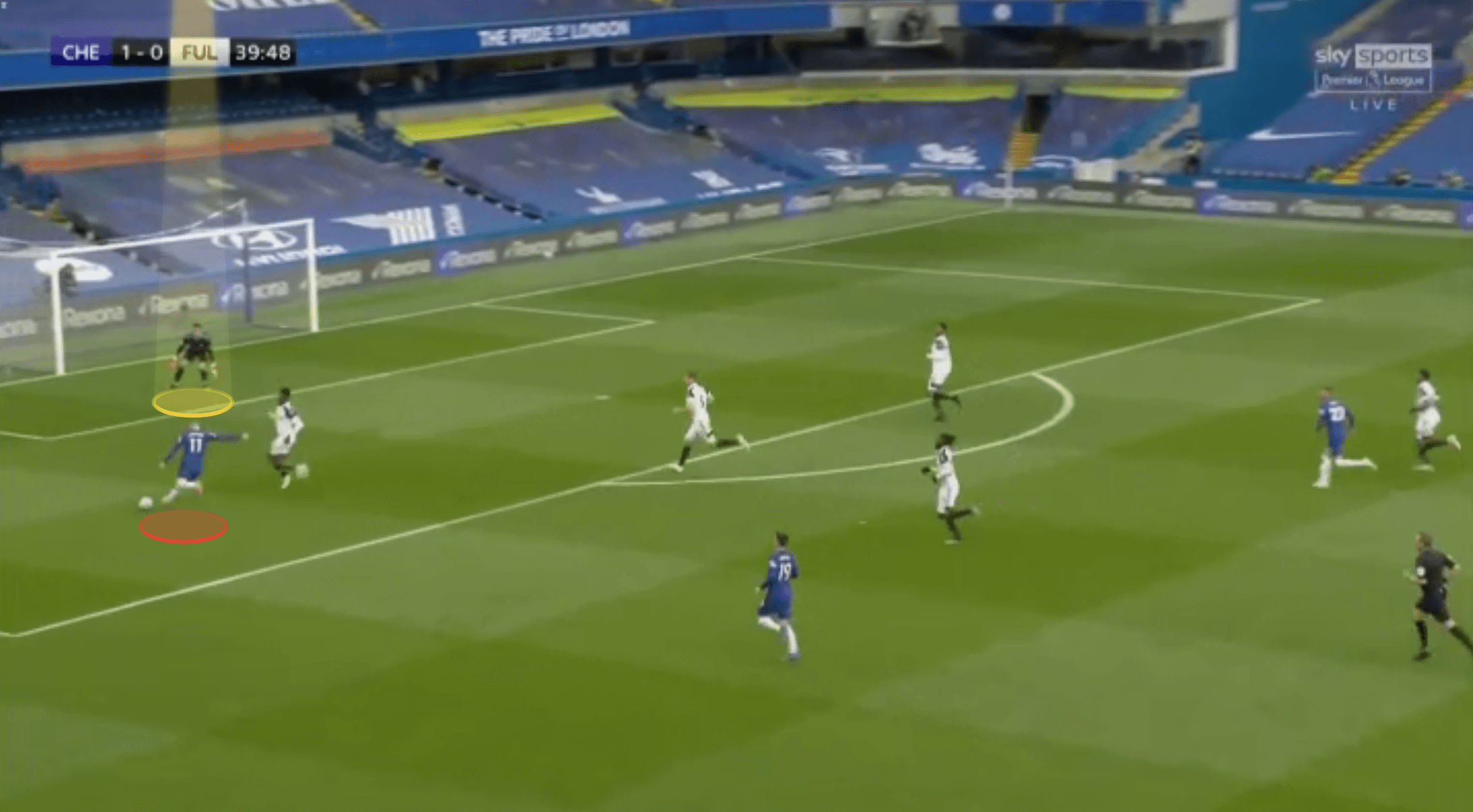 Werner chose to go to Areola’s left in this instance. As the shot was made Areola took a big step in the opposite direction of the shot, digging his right leg into the ground before pushing himself into a full extension in the direction of the shot. The next image shows this, but what should also be noted is, not only does he manage to quickly get low to the trajectory of the shot, but also gets both hands down, safely securing the ball. 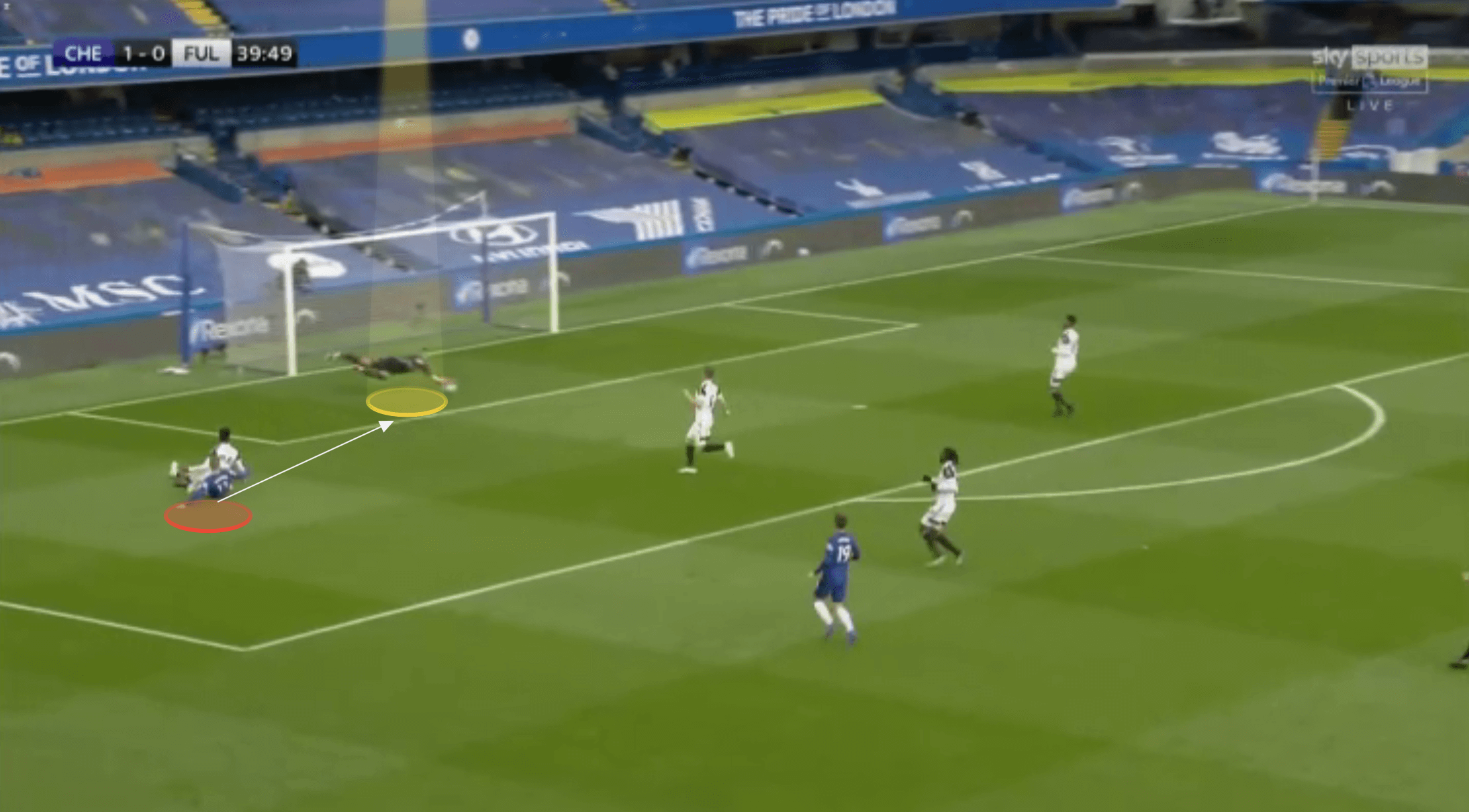 In terms of his shot-stopping, Areola is up there with some of the best in the league. He regularly pulled off some outstanding shots in the Fulham goal last season. Even though in the previous example he got both hands to the ball, he would consistently provide evidence of his ability to make strong, one-handed saves too, such as in the next image, where he acrobatically adjusted and stretched at full tilt to punch this effort well away from goal. 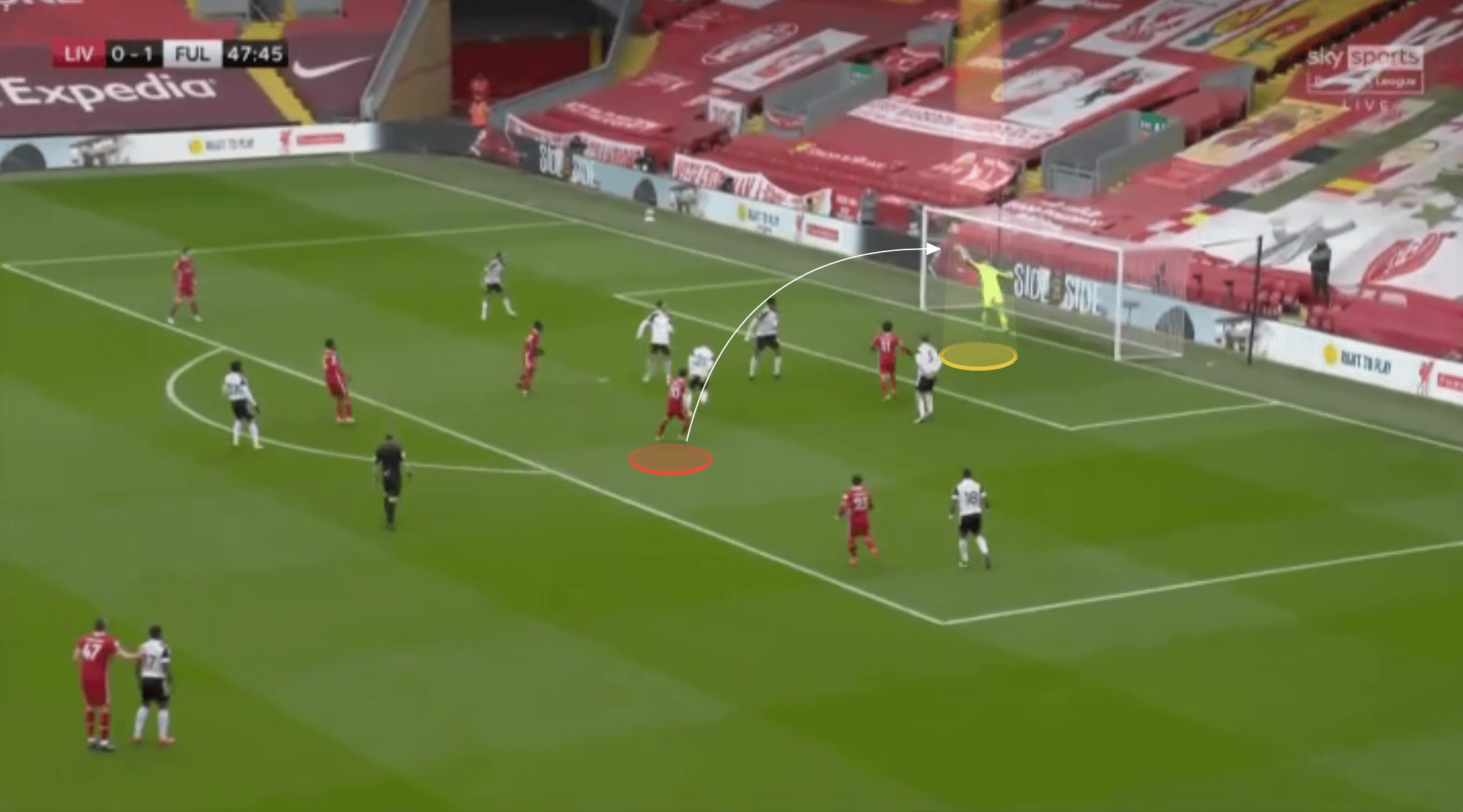 If anything, Areola is far weaker with shots closer to him. Given his large frame and explosive athleticism, he excels at anything that requires him being at full stretch, but when a shot is placed within a yard or two of his body, he can struggle to adjust quick enough to make the block. This was seen in Southampton’s second goal in their 3-1 win over Fulham at the end of last season, where Nathan Tella’s finish from close range was struck down the middle of the goal in perfectly saveable range for Areola. 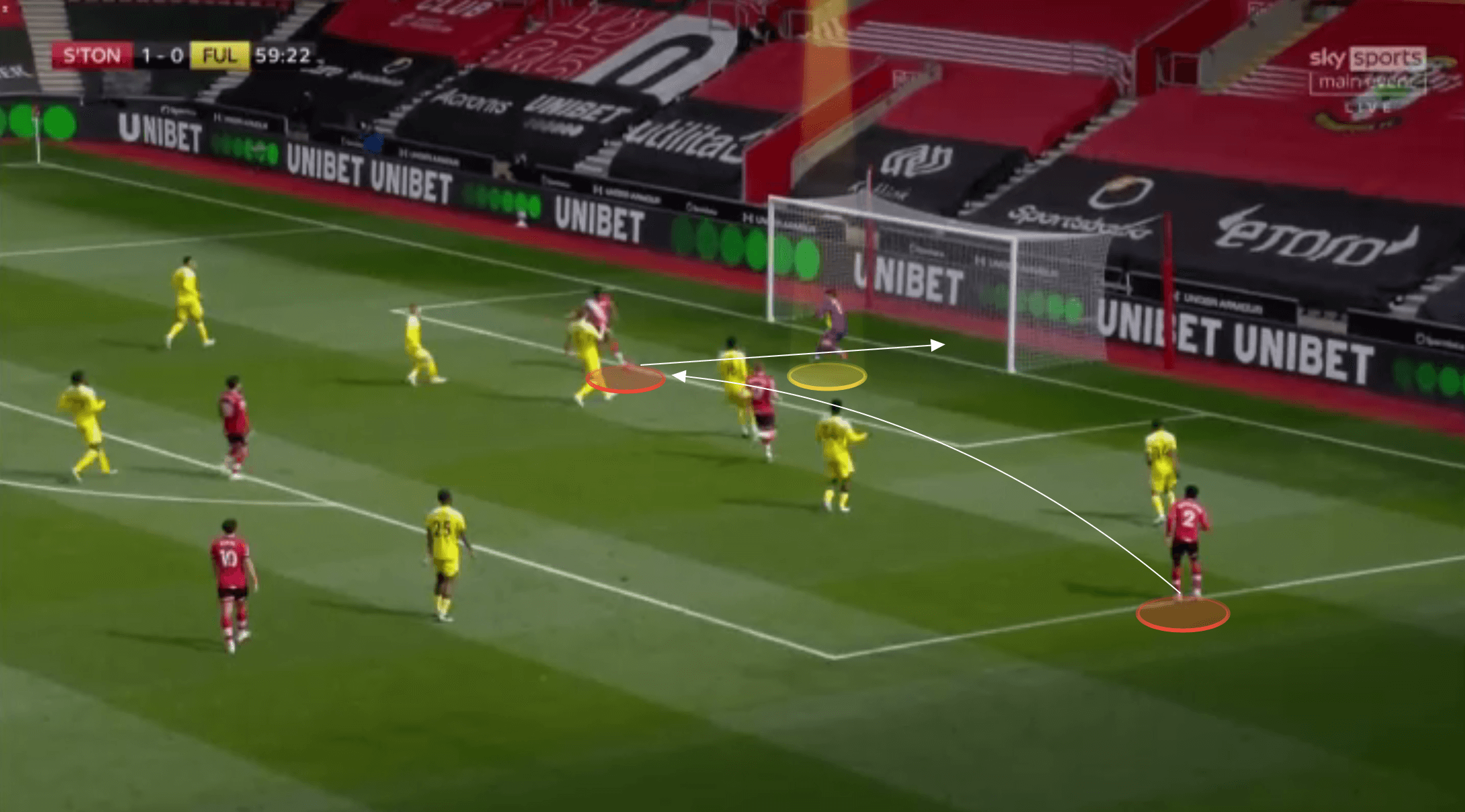 With his initial high starting position and willingness to sweep you could be forgiven for expecting Areola to be highly aggressive in pressuring an onrushing forward in a 1v1 situation. In fact, the frenchman can show some restraint in this moment, and trusts his shot-stopping ability enough whereby he may look to back track in this moment, quickly setting himself, covering the front post and readying himself to dive across goal, just like in the earlier example. 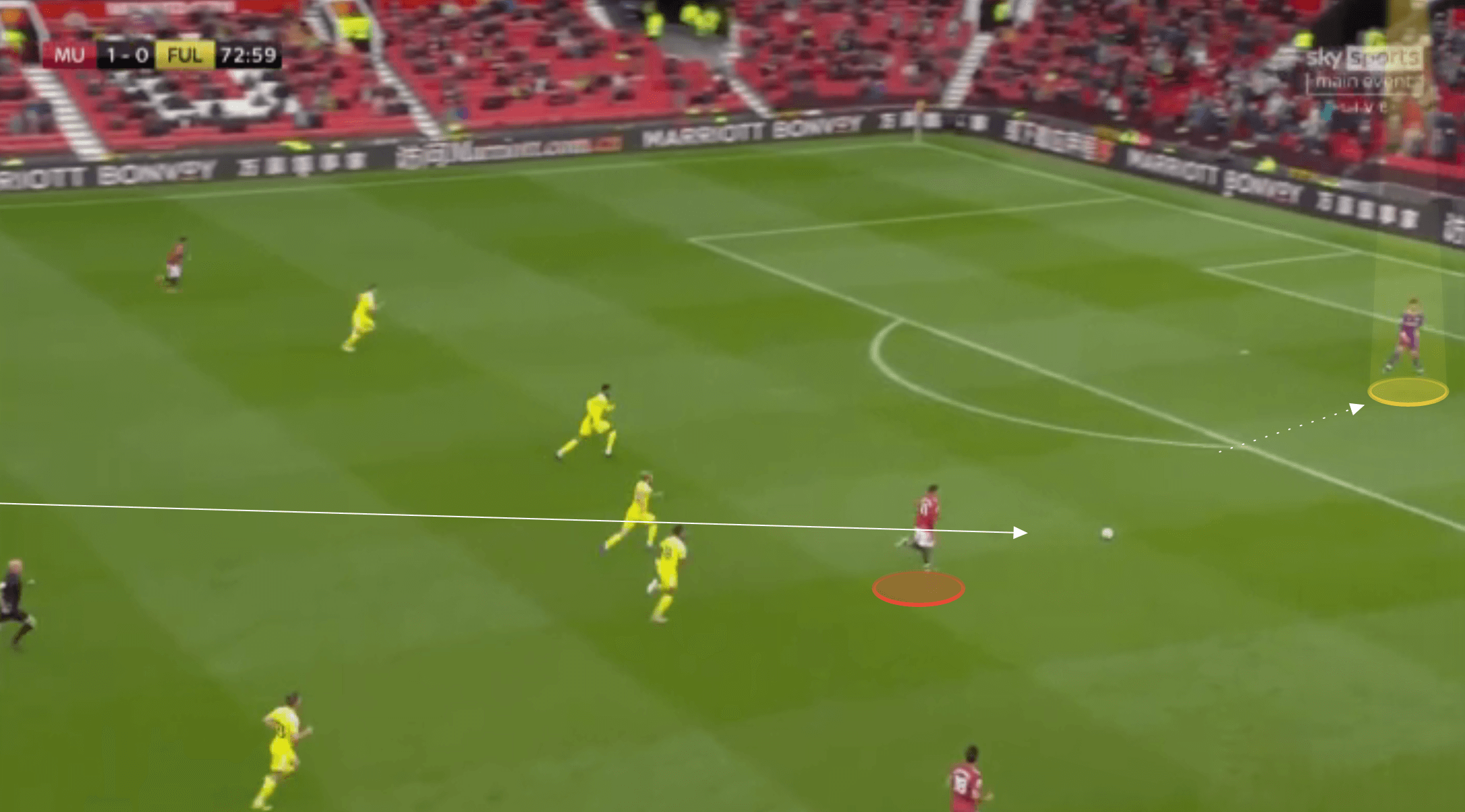 If he closes off the front post shot, but there is the potential for the opposition to square the ball across goal for a teammate pushing forward, Areola will react to this at the latest possible moment, never ruling out the front post effort. 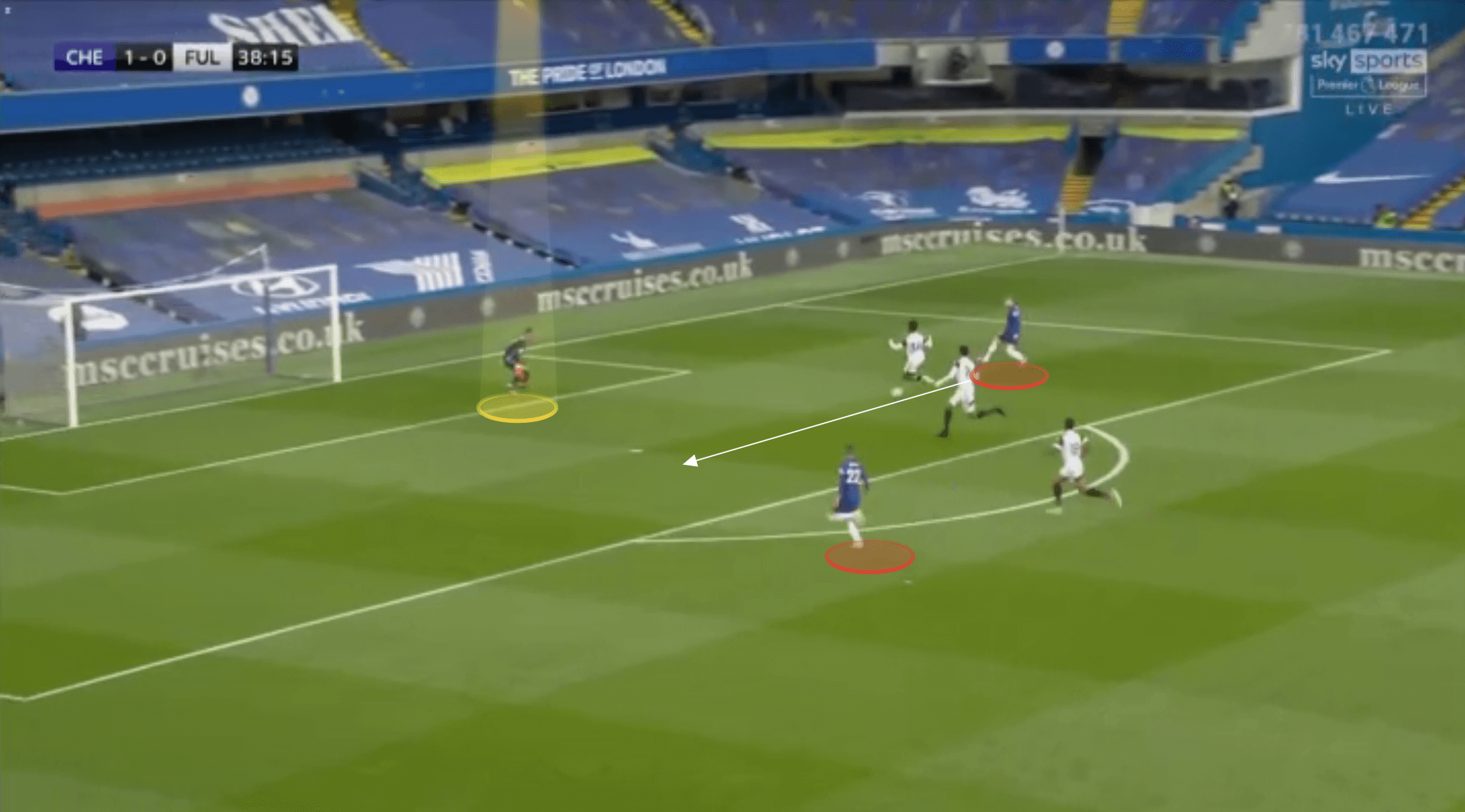 As the ball is played across, he remains upright as long as possible, not committing himself to the dive until the ball is struck. He can then adjust to the flight of the ball. In the following image we can see how upright he is as the ball is being struck from close range. Nevertheless, Areola dived to his right and made the save in this instance. 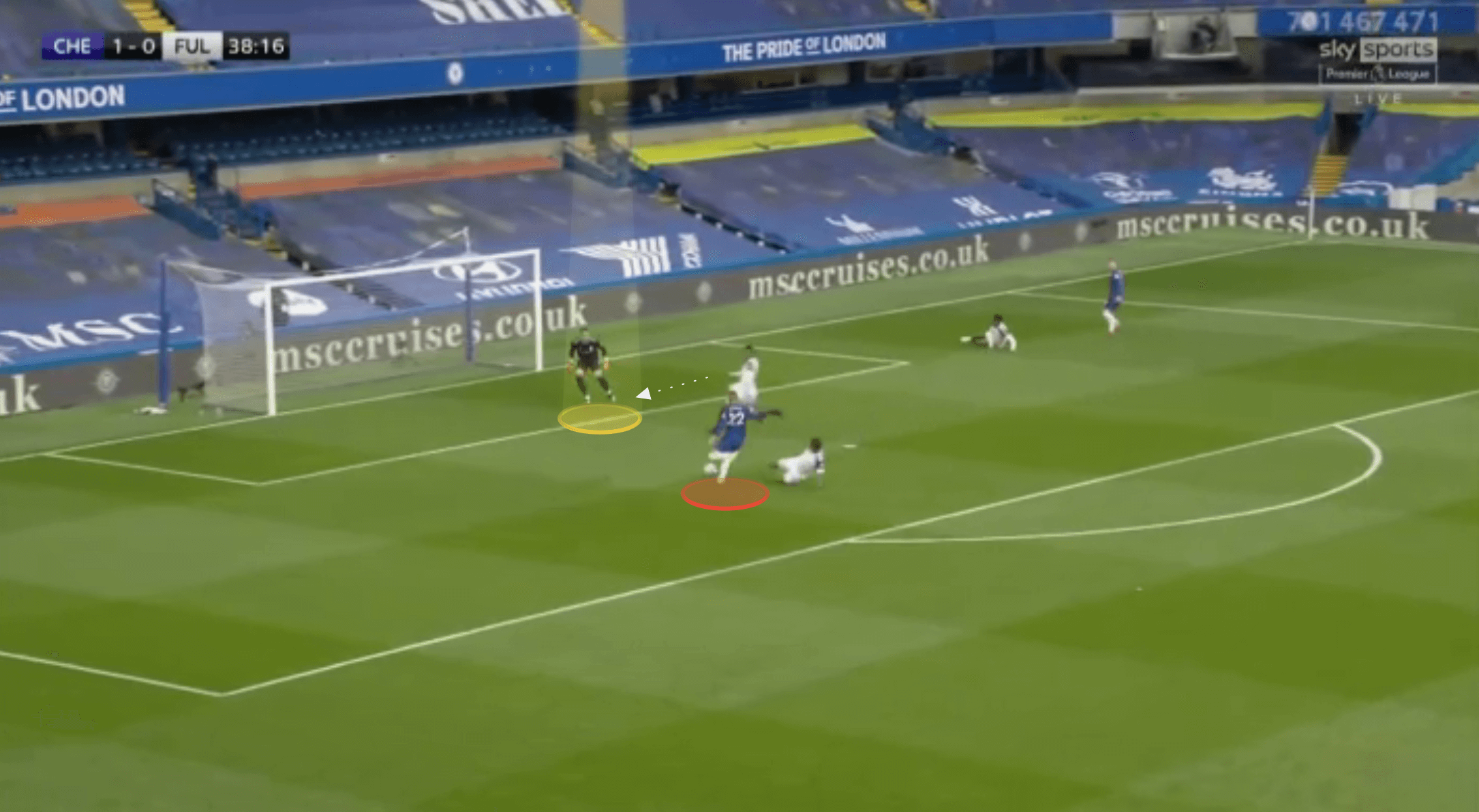 Coming off his line

Areola is unsurprisingly aggressive when it comes to coming for crosses too. He can get pulled slightly towards the near post of the goal as a corner or free-kick is being taken, which does run the risk of his back post being picked out. We can see this in the next image. 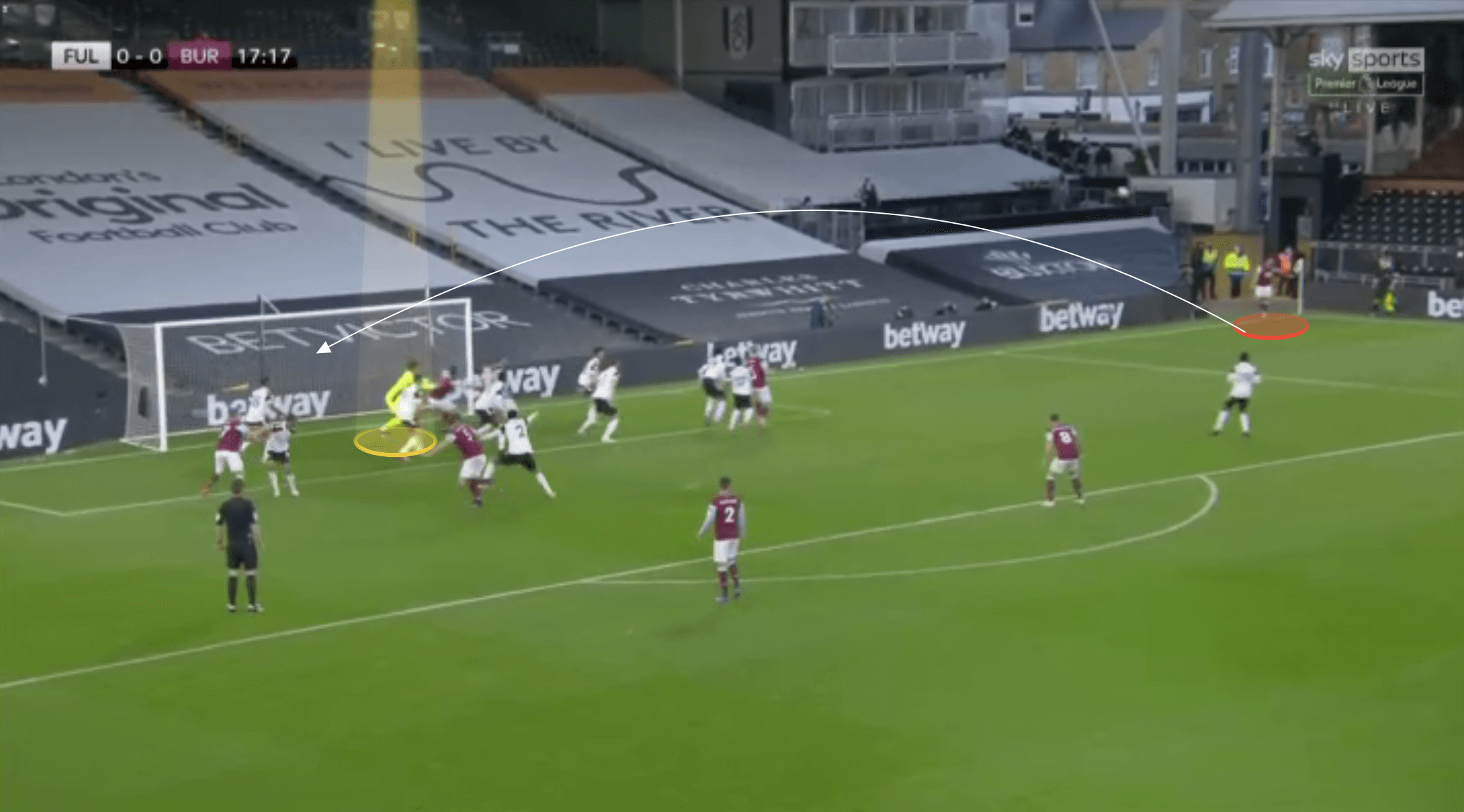 However, he is agile and can adjust himself to get to the flight of the ball. He doesn’t always take the ball at the highest point of his jump though. 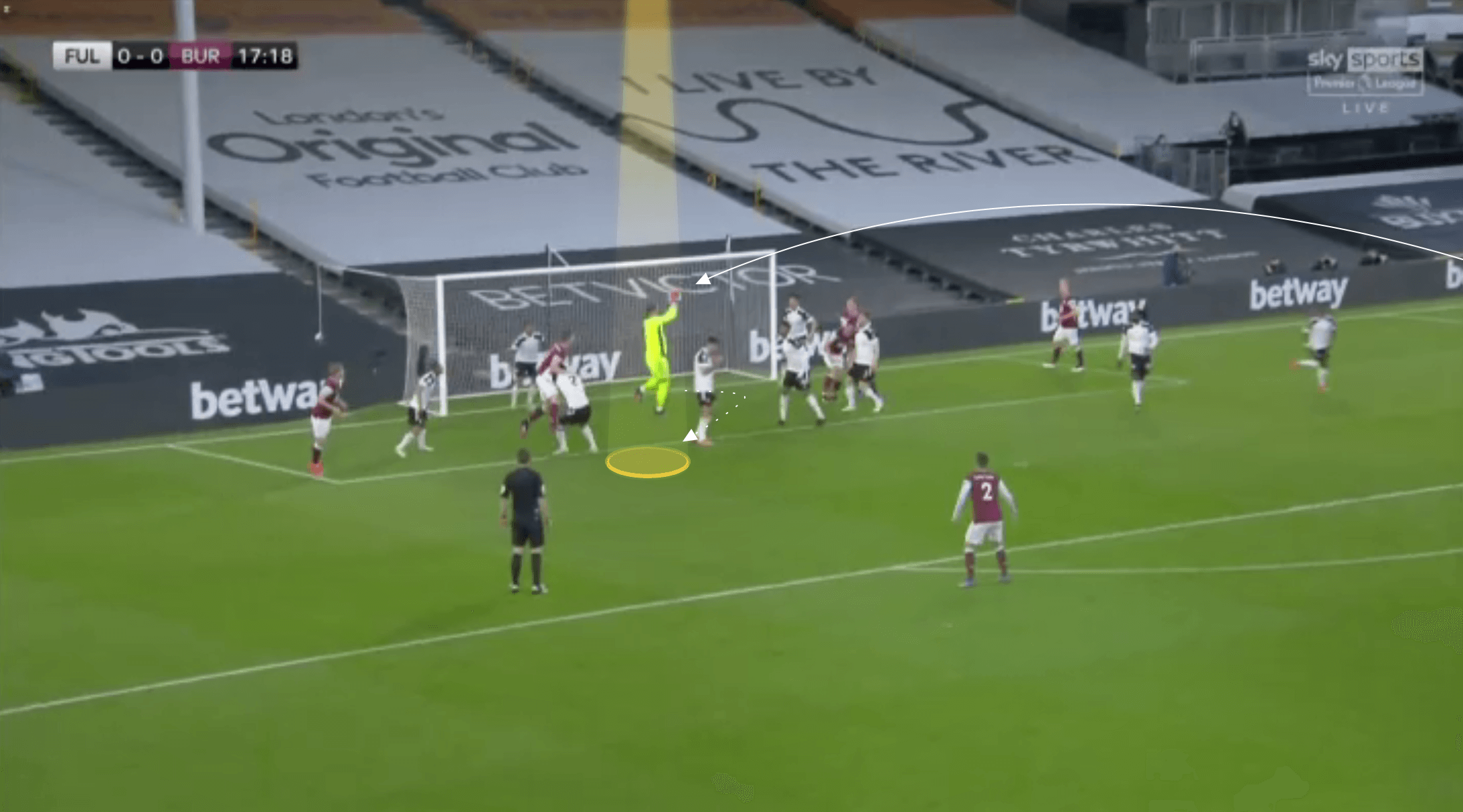 His judgement on whether to take catches like he does in the previous image, or come to make punches, like he does in the next image, are often of a good standard too. He is brave in coming through groups of players, and importantly he consistently gets an impressive distance on his punches too. 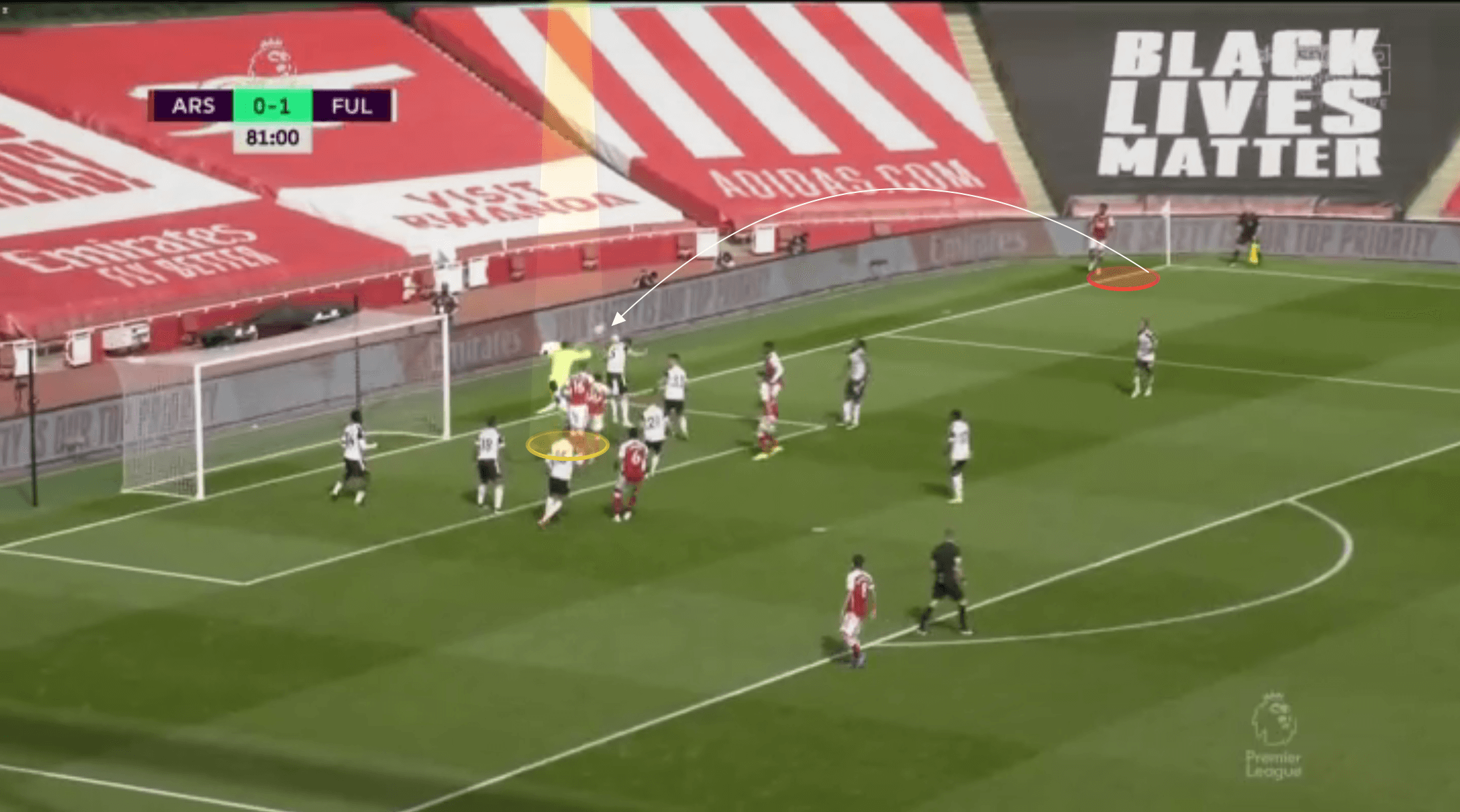 There are times where he is unnecessarily aggressive in coming for the ball though, and this can give the impression of an erraticness in his performances. He may come well off his line to claim a ball, and not secure it as you would expect, perhaps misjudging the flight, and as he adjusts himself to claim the ball, takes a clean header away from one of his defenders, with his punch not clearing the danger as the header would have. 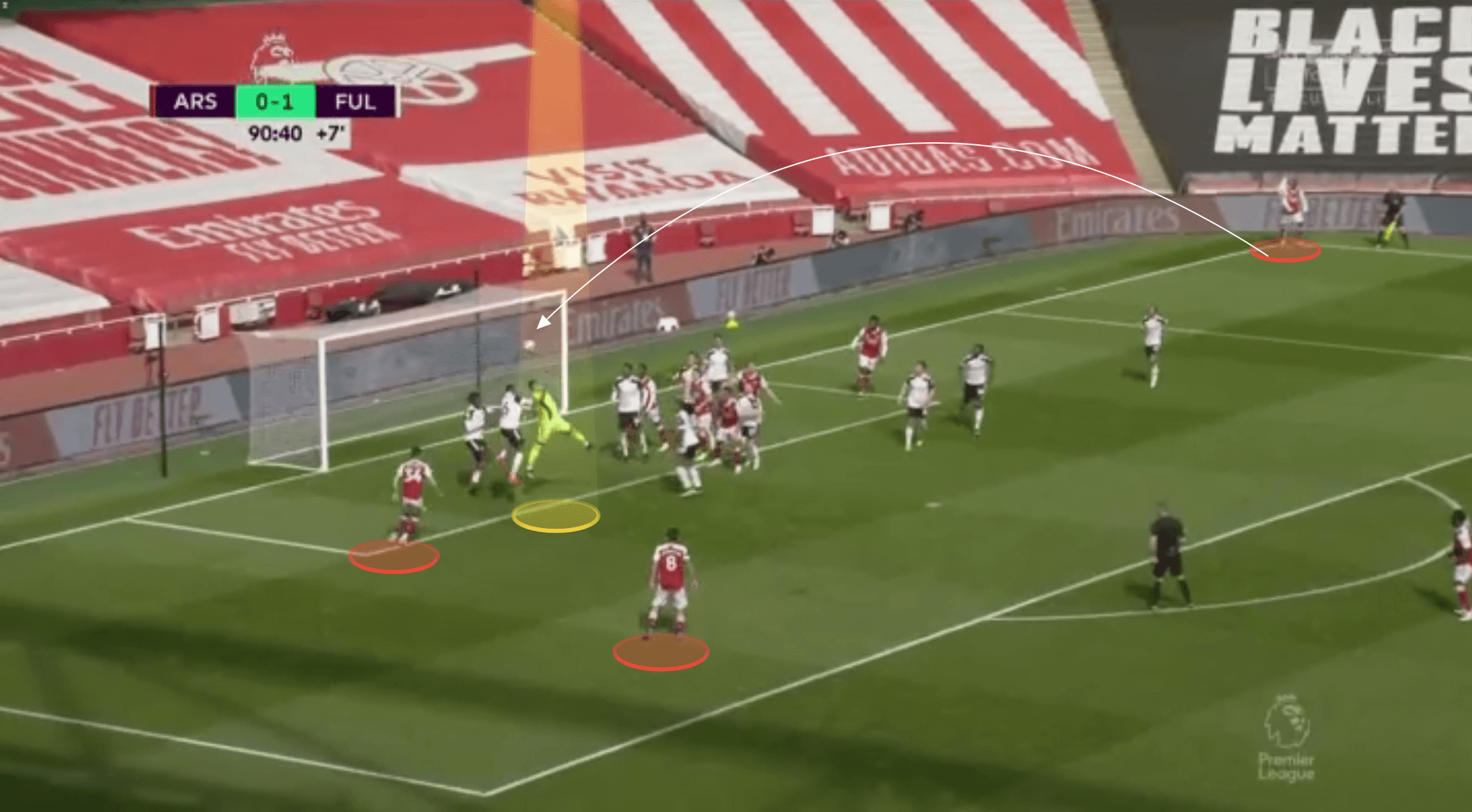 Areola comes well off his line, not just from set-pieces but in open play too. He anticipates long balls being played forward, and along with his already high starting position, he is able to spring forward and claim the ball with authority. 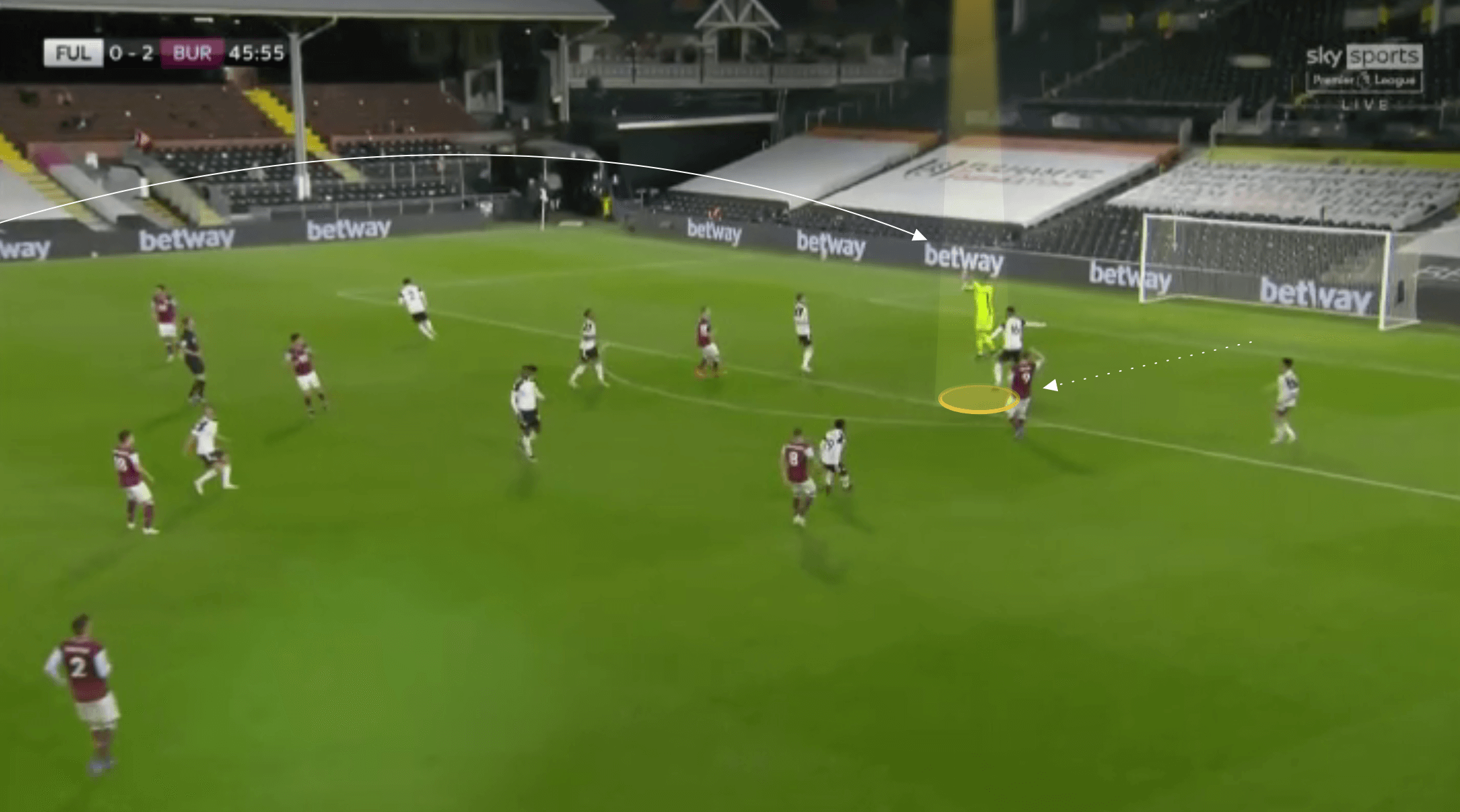 He doesn’t necessarily just move forwards in his box to make these claims either. Areola is equally aggressive in shifting across his box to do likewise. There are perhaps few Premier League keepers in the league who truly dominate their area with the same zeal to claim the ball as Areola does. 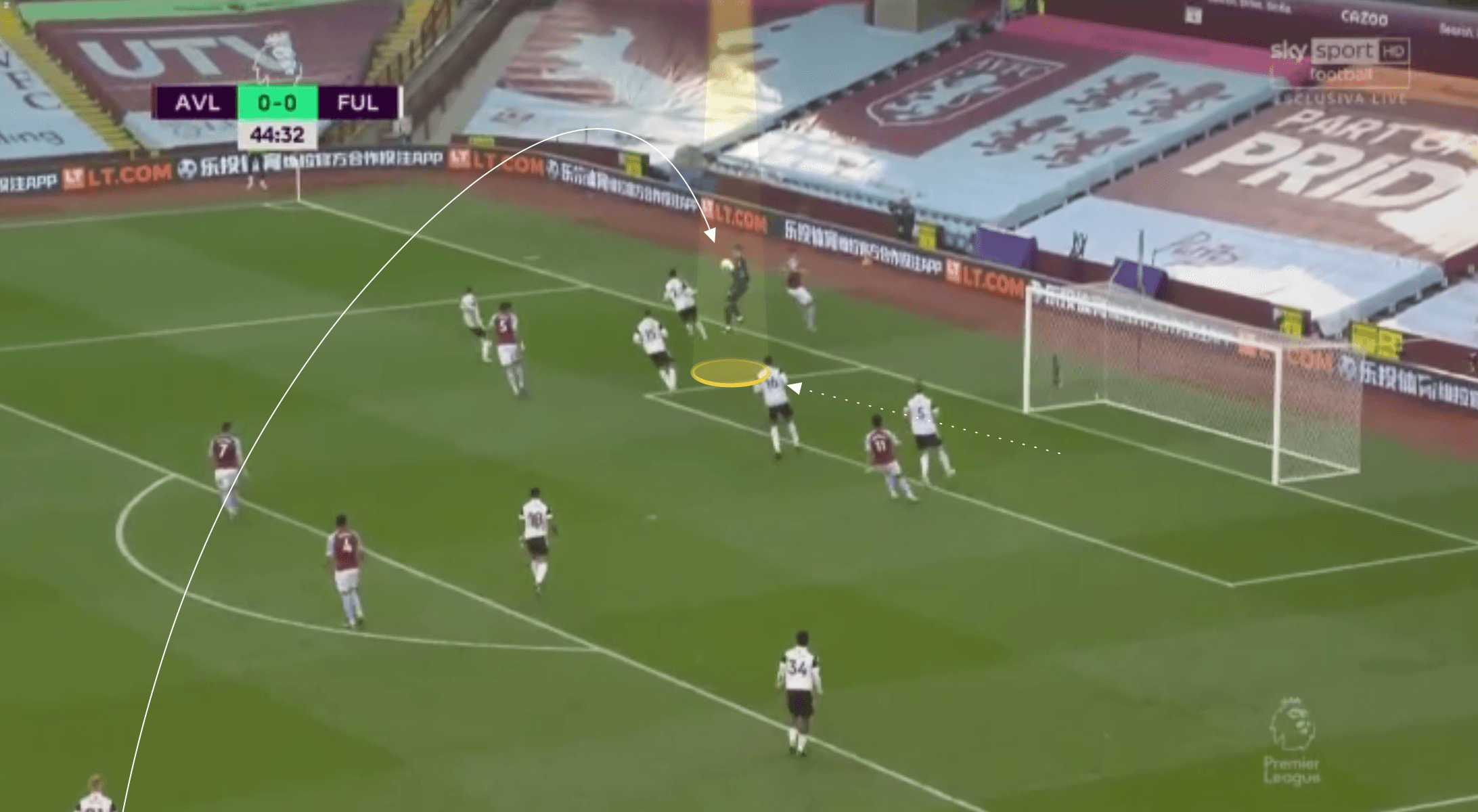 With Fabianski likely in the last year of his contract, and with his performances, and fitness levels, last season showing some cracks in a consistently strong career, Areola has been brought in at West Ham to provide competition. However, with an option to buy in his contract, it’s highly likely that the Frenchman is the long term answer to the number one position for West Ham. Given his outstanding performances in goal for Fulham last year, this is exciting news for Hammers fans. Even though there is the odd touch of erraticness which may emerge from time to time, Areola is a shot-stopper of the highest standard, who also has outstanding ability in possession, and an obvious commanding presence in goal too. He suits a side whose tactics involve a goalkeeper playing an active role in possession. It remains to be seen whether he can add to his three senior international caps, but he has six years on French number one Hugo Lloris, so it wouldn’t be surprising to see him compete for that spot should he dethrone Fabianski and continue his fine form from 2020/21.