Is Jan Oblak one of the better keepers in the world? – scout report

Jan Oblak is often overlooked when it comes to deciding the world’s best goalkeeper. The Slovenian plays behind a much more solid defence than the likes of David de Gea at Manchester United. Oblak has some outstanding statistics and although his terrific defence certainly aids him, would he be able to perform without them? A previous data analysis that we conducted showed that Oblak is one of the best performing goalkeepers in their peak.

This tactical analysis will prove that Oblak is still one of, if not the best goalkeeper in world football. Although Atlético Madrid has one of the best defences in Europe, this only limits the saves that Oblak needs to make, meaning he still makes world-class saves. This analysis will look at the best aspects of his shot-stopping, as well as his biggest weaknesses.

How good is Atlético’s defence, and how good is Oblak? 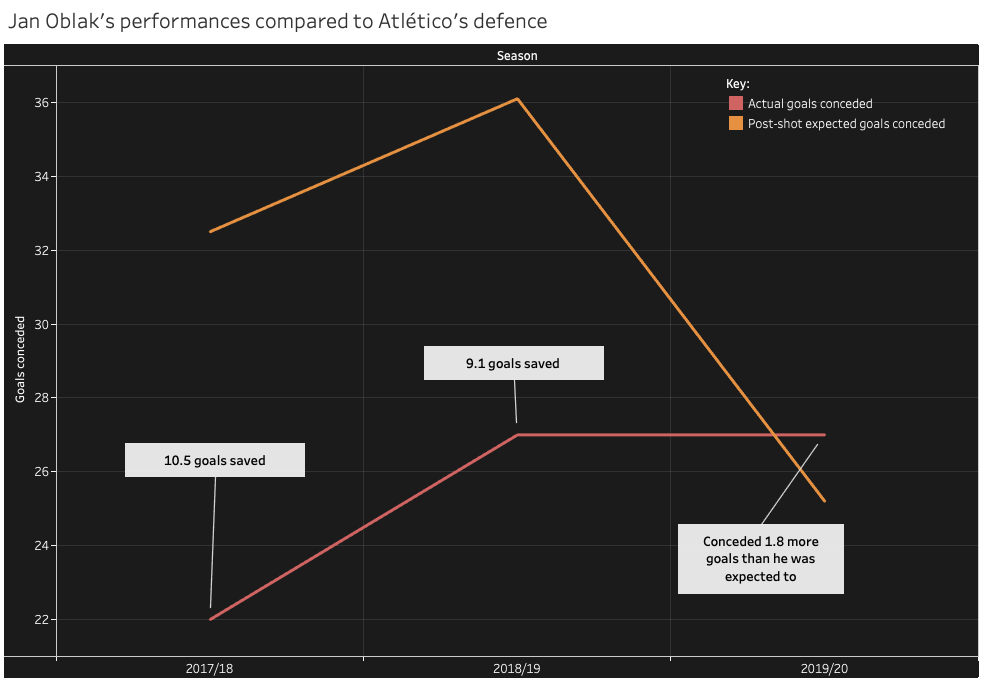 The above graph shows how many goals Atlético Madrid have conceded over the past three seasons and how many they were expected to concede (PS xG). Ultimately, the goal difference is the amount that Oblak has prevented. As is evident in the graph, Atlético still concede a huge amount of opportunities, with Oblak saving more shots than he is expected to. Only in the most recent season did he concede more goals than he was expected to. In the 2019/20 season, Oblak conceded the same amount of goals as in the previous season. However, he faced easier shots on average. In the current 2020/21 season, Oblak saves 0.5 goals per 90.

Oblak has many attributes and skills that have helped him become one of the world’s best shot-stoppers. He is an ideal height for a goalkeeper standing at 6’1, meaning he is able to get down low as well as he can save shots in the top corners of his goal. However, Oblak’s positioning and decision making help him avoid making spectacular saves, rather he doesn’t often have to move much because he is in an optimum position. This is partly the reason he often gets overlooked as the best goalkeeper in the world because he doesn’t make world-class saves as often as the likes of de Gea or Manuel Neuer. 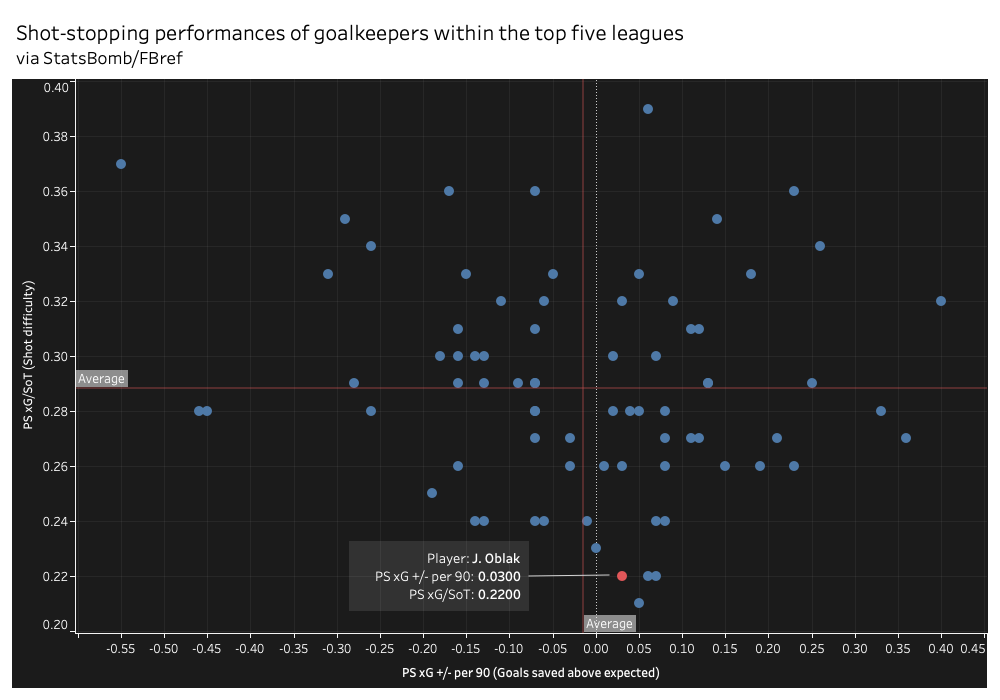 The above graph shows how Oblak compares to his peers in the top five European leagues. It shows their shot difficulty and the goals they save above/below expected. We can see that last season, Oblak faced, on average, some of the easiest shots with a PS xG/SoT value of just 0.22. His PS xG +/- per 90 was significantly lower than previous seasons, saving just 0.03 goals per 90.

As we mentioned previously, Oblak’s biggest strength when it comes to shot-stopping is his ability to get into the best position to stop the shot. Rather than forcing himself to make a harder save with worse positioning.

In the above example against Sevilla, we can see how his positioning helps him prevent a goal. He adjusts his position well to cover his near post. He identifies that this is where the cross is going early on. This gives him more time to get the best position. He’s able to save the ball from behind the post because he can get his full body behind the ball.

Good positioning not only increases the chance of making a save, but it helps the keeper make a better save, as we can see in the example below.

Against Liverpool, Oblak makes what seems like a fairly routine save. However, as we can see, Oblak only has one safe place to parry the ball. With three Liverpool players following in unmarked, the Slovenian knows that if he spills the ball, it will likely rebound to an attacker. Oblak’s positioning and anticipation mean that he’s able to get down low early and palm the ball into the safest area.

The above example combines his reflexes and good ability to readjust his position. He uses his footwork to move across his goal line towards the other post. This save is made better because Oblak has to adjust his body to his right whilst all his momentum is going to his left. Although the ball is at a good height for the goalkeeper, he still does well to react to the save and tip it over the bar.

As well as his reactions and saves, Oblak’s one-on-one ability is world-class.

In the above example, the keeper doesn’t rush out. Rather he waits for the attacker to get closer, allowing the Atlético defender to apply pressure and worsen the shot. Oblak staying closer to his goal allows him more time to react. He makes a great save down to his right.

Oblak is very good at choosing how to deal with different one-on-one situations. In the above example, he stays near his goal line. But in the one below, he closes down the attacker.

When the attacker is played through, Oblak begins to rush out of his goal to close down the angle. However, the striker’s touch forces him wide, which allows the keeper to readjust close to his goal line. He hasn’t rushed out to the attacker, which eliminates the chance of him being chipped. Rather, he’s able to spread himself as the attacker shoots to prevent a goal. As we can see in the second image, a combination of Oblak and his defenders means that the attacker has almost none of the goal to aim at. If Oblak is closer to his goal-line, then the attacker would be much more likely to find the back of the net.

Is Oblak good enough with the ball at his feet?

Pep Guardiola’s arrival at Manchester City brought a huge debate on how capable goalkeepers should be with the ball at their feet. Guardiola claimed current number one, Joe Hart, was simply not good enough. The best goalkeepers in the world are great passers – Alisson, Neuer, Marc-André ter Stegen. However, Oblak is not. 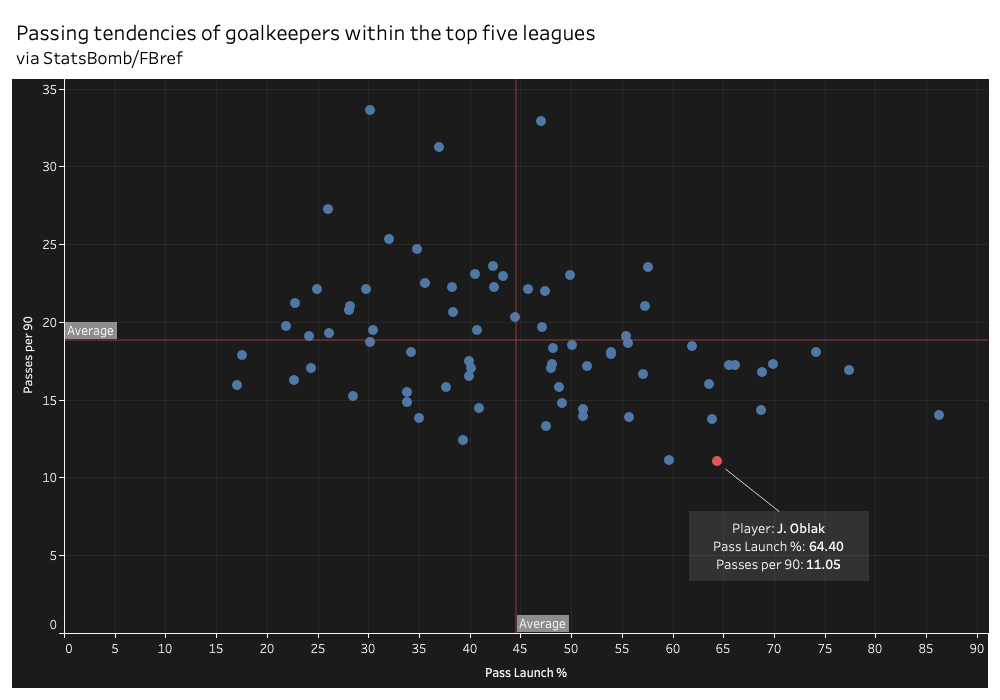 From the above graph, we can see that Oblak’s stats are not great when compared to other goalkeepers. The Slovenian doesn’t make many passes, with just 11.05 per 90, one of the lowest within this sample. A mixture of his own confidence and Atlético’s tactics mean that he launches the ball a lot. A huge 64.40% of his passes travel more than 40 yards, meaning he doesn’t seem confident playing the ball short. 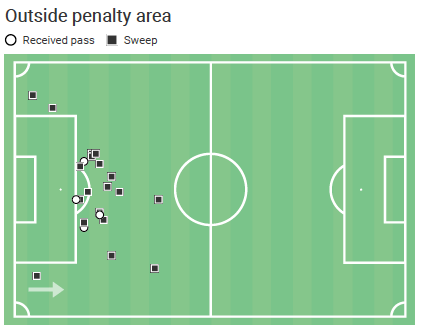 We can see by the above map that although Oblak is confident in defending the area behind his defensive line with sweeps, his average position is inside his box. The keeper rarely receives the ball outside of his box. 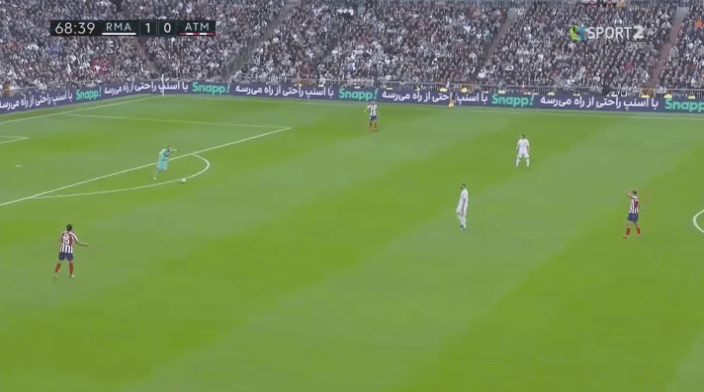 For example, we can see in the image above how Oblak continuously ignores short options in favour of a more direct route. Both Atlético centre-backs are free with Stefan Savić calling for the ball. His team’s tactics mean that Oblak has been told to go longer. However, this will cause him to fall into a habit of ignoring simpler passes and building attacks from the back. This, along with his huge price tag, has been a major turn off for possible suitors for the Slovenian.

This scout report has outlined why Oblak is one of the best shot-stoppers in the world. However, his lack of passing skills and sweeping ability means that he isn’t one of the best all-round goalkeepers. His positioning means that he doesn’t need to make constant world-class saves. Meaning his performances don’t get seen by the masses. Success has been hard to come by at Atlético for Oblak, so maybe it is time for a move away. At just 27-years-old, the Slovenian has many more seasons to progress and improve on his weaknesses.