On the 11th game week of the 2020-21 Premier League, in-form Chelsea hosted another in-form team, Leeds, in an exciting clash at the Stamford Bridge which welcomed fans for the first time in 9 months. Both the teams went into the match after registering impressive wins in their previous games with Leeds winning against Everton and Chelsea thrashing Sevilla to seal a round of 16 spot in the Champions League in the midweek.

This article features a tactical analysis of the tactics deployed by both the managers. Let’s begin the analysis.

Chelsea lined up in a 4-3-3 formation that has been proving to be successful for them ever since their loss to Liverpool earlier in the season. Giroud was rewarded with a start again after his extraordinary performance against Sevilla. 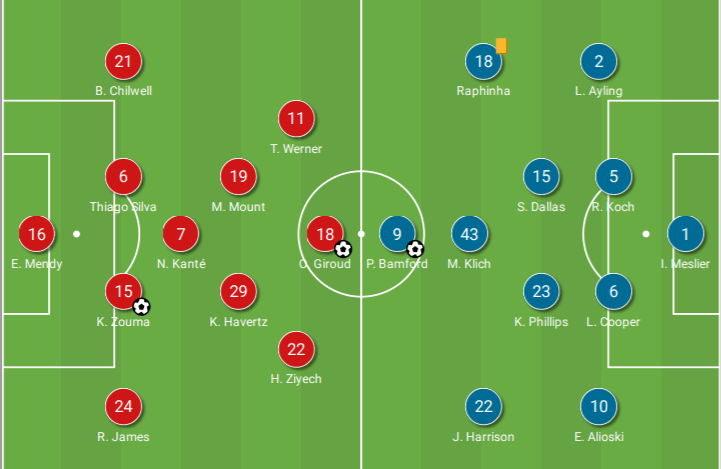 Ever since their loss to Liverpool, Frank Lampard has grounded on fielding a 4-3-3 formation that attempts to get the best out of everyone in their squad. With Kante acting as deep-lying central defensive midfielders, the other 2 midfielders have the license to essentially function as number-eights and their formation becomes 4-1-4-1 when they approach the final third. Inside the final third, they shift to a 2-3-5 formation, having huge flexibility. With creativity from their full-backs as well as their number-eights, they can constantly form triangles and they did that rightly against Leeds.

For most of the match, they were very direct and very often tried to skip the middle third by directly going into the final third. This was evident from the very first minute. Oliver Giroud dropping deep forces Robin Koch (centre-back) to follow him. This opened space for Ziyech to run into and take a shooting chance. 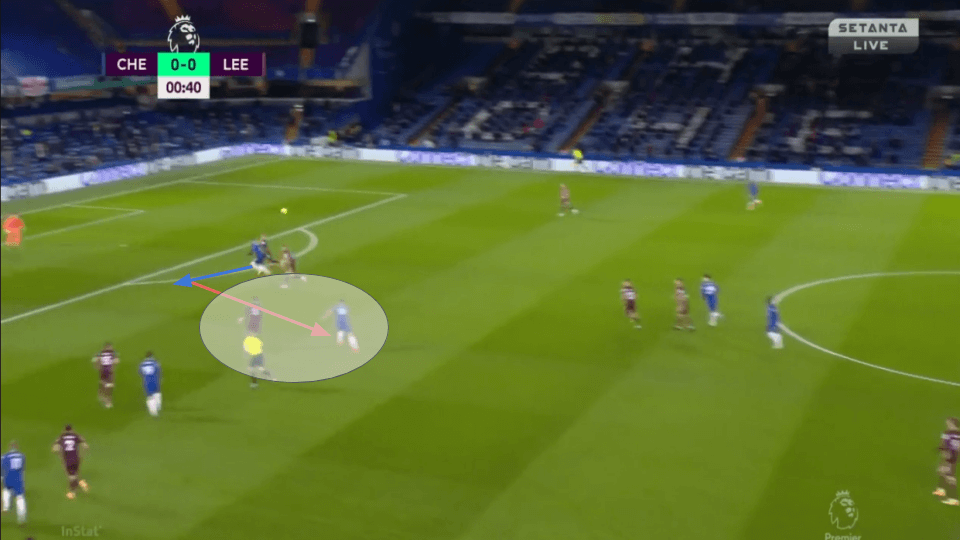 Oliver Giroud was flawless with his movement that day as he tried to make decoy runs, drag defenders with him, and open up gaps in the final third. With Leeds using a man-marking approach all over the pitch, Koch eventually was pinned to Giroud, which he took advantage of in the match by dropping deep as Koch kept following him. In the image below, we can see him dropping deep, dragging Koch, and forming a midfield diamond shape with Chelsea’s central midfielders in a shape of 4-3-1-2. We can see Ziyech (red circle) immediately looking to make a run into space after learning Giroud has dropped deep. 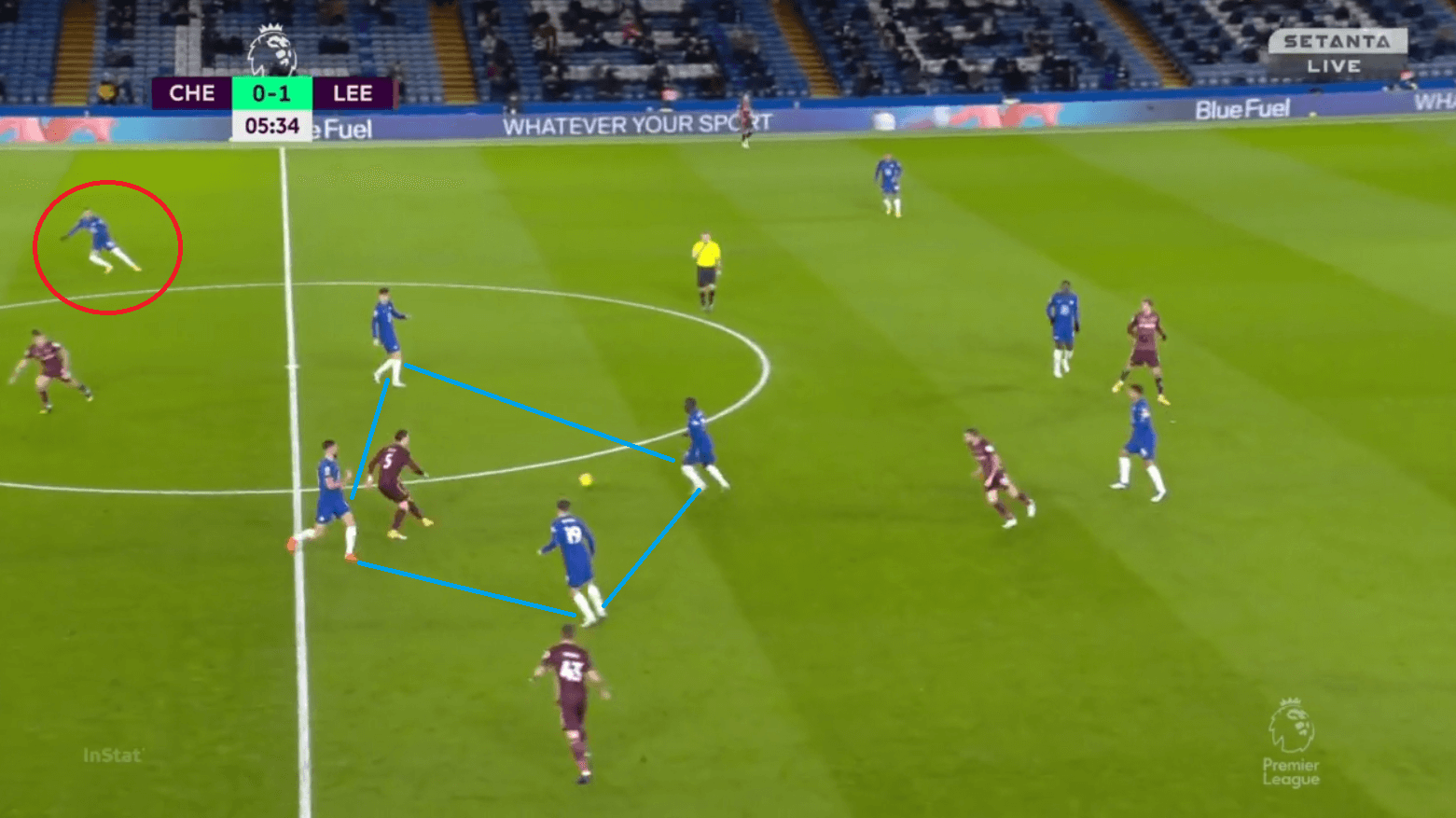 They would also use Giroud as a target man soon after the Leeds goal where Giroud would again drop deep, but only this time the ball would be targeted to him and he would flick the ball in behind the defence as one of the other players closer to him looked to make a run into space.

In the build-up phase, to tackle the intense press of Leeds and shift the ball into the second phase, Chelsea would ask Mason Mount to drop deep and help the team in building up. This would give the license for Chilwell to go higher and play as a wing-back while Werner can now move centrally into the vacated higher half-space from where Mount dropped. This way, Chelsea can create a numerical superiority as one of the centre-backs or Mount would be unmarked and the ball can be carried forward. In the example below, we can see Mount dropping and then Werner dropping to attract the Leeds players. This then creates a free man (Zouma), who now has huge space to run into and carry the ball. 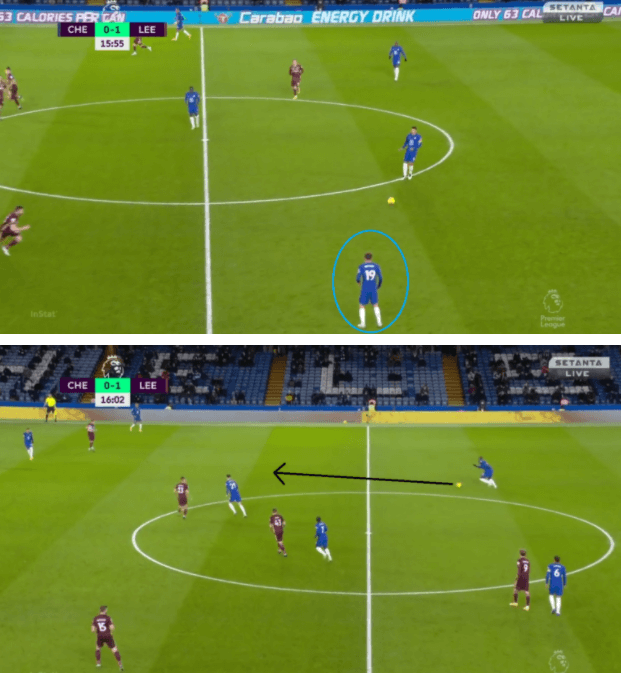 Chelsea’s abundant creative options, especially in the right wing, proved to be very difficult for Leeds to handle. With Ziyech playing as an inverted winger, Havertz in the CM slot, and Reece James as the right-back, all three of them were capable of excellent chances both from the wide regions as well from the byline. They deployed some good triangular combinations and patterns.

There were two options for Ziyech, one of which was that he could stay wide and drag a defender to the flank with him. This would open the half-space for the likes of James to make an underlapping run or Havertz to make a run. Ziyech also has the capability to spray in a deep inswinging cross into the box. The other option was Ziyech coming inside and opening the space in the wing for James to make an overlapping run from where he can put in crosses. The latter one eventually led to the first goal as Giroud found the back of the net from a good cross by James. 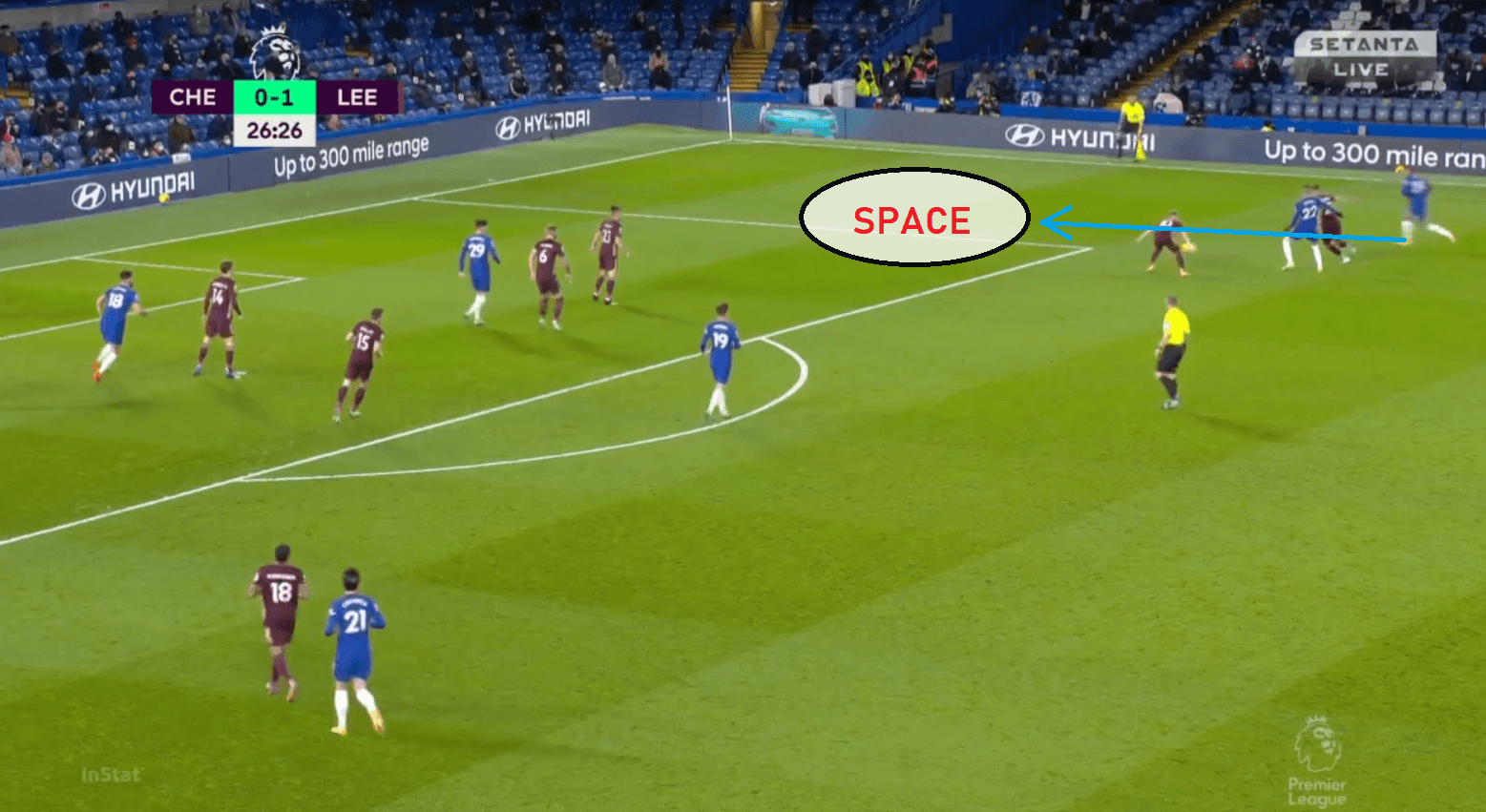 Leeds without possession were majorly in a 4-5-1 formation and they deployed a man-to-man approach throughout the pitch. The only form of flexibility in an otherwise rigid man-to-man marking was they used only one forward (Bamford) to press the two Chelsea centre-backs. He would press in a way to ensure that he presses one of the centre-backs while closing the passing lane to the other. This can be seen in the image below. 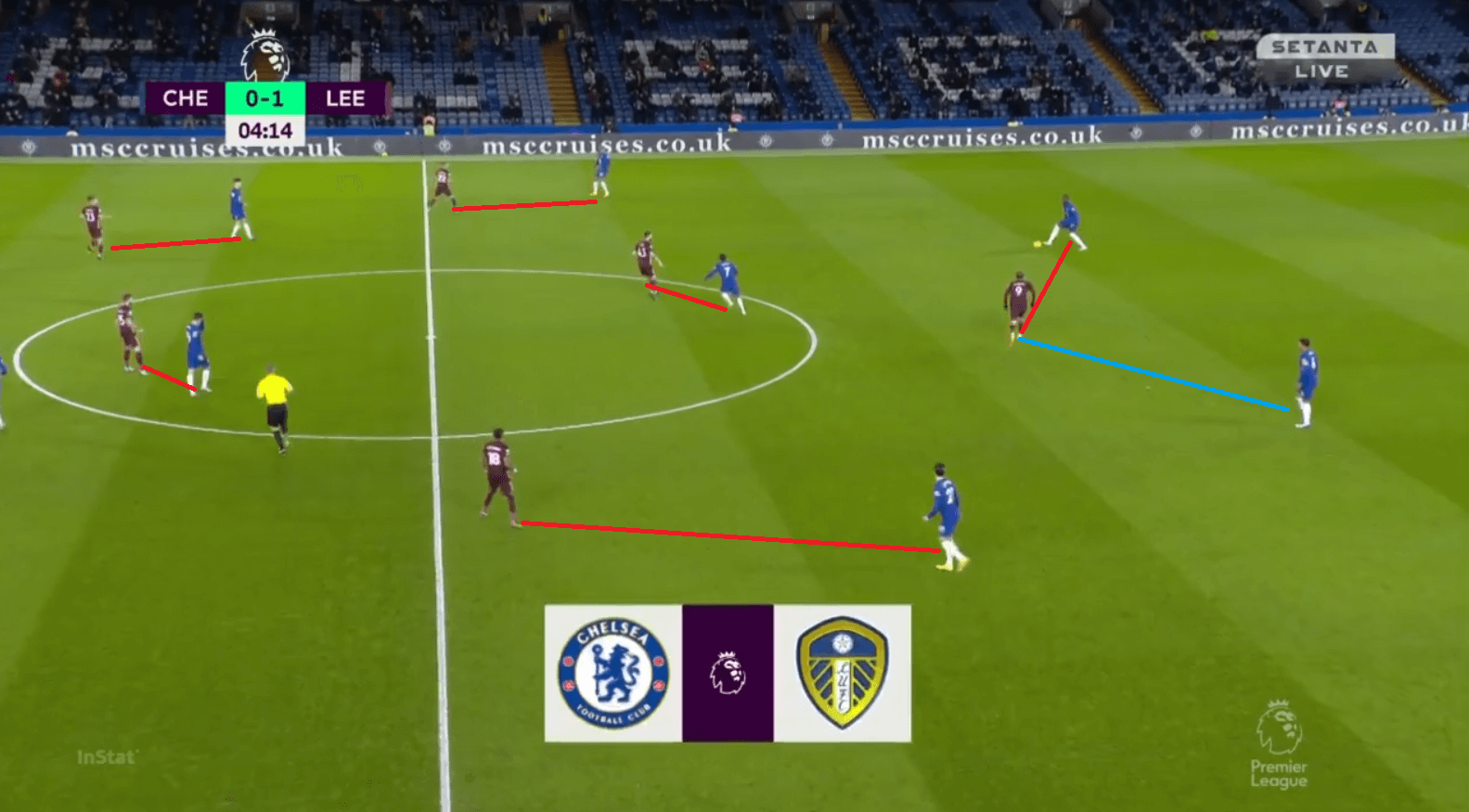 Bamford is pressing Zouma from sideways, thus cutting the passing lane to Thiago Silva as he took out two Chelsea players with his pressing while the rest of the players man-marked each of the other players in midfield. The advantage of this minus 1 player in the final third was that it left another Leeds player free without a marker and he can easily help any of his teammates in dealing with 2 v 1 situations and establish defensive superiority. Despite that extra man playing in the defence tactically, Leeds were soon manipulated easily by Chelsea as the Londoners easily found ways to drag defenders out of position and open spaces and gaps on the pitch. 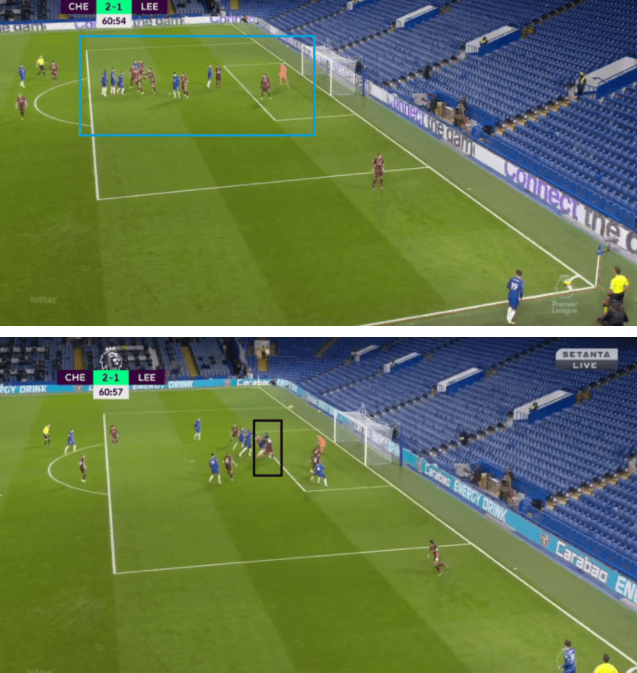 Leeds’ reliance on heavy, man-marking defending extended even into the set-pieces and it proved to be a very big issue which Chelsea easily exploited. The very reason for their success on the set-pieces that day was that Chelsea had some of the tallest players as well as aerially dominant ones on the pitch. The likes of Thiago Silva, Kurt Zouma (who has the best aerial success rate in the league), Giroud, and Kai Havertz are all tall and good in the air. So when it came to winning the 1 v 1 battle, Chelsea was surely going to win it which they did.

In the example above, we can see the Leeds players were assigned markers to mark in the box and they have only one zonal player. Zouma and Giroud (red box) stay slightly far from their markers. When the ball is played, Giroud runs and blocks (black box in the second image) Zouma’s marker from reaching him. Zouma then put a free header into the net and Chelsea took the lead.

In possession, Leeds’ shape looked somewhat similar to a 4-1-4-1 formation with Kalvin Phillips playing as a defensive midfielder and offering himself as the third man in the build-up phase. They looked to stretch the field as much as possible as they tasked their wingers to stay very wide to drag defenders and open the half-spaces for their midfielders to run into or even for the full-backs to make an underlapping run.

In the image below we can see both Raphinha and Harrison staying very wide in either flank while Bamford pinned the centre-backs. This gives them an opportunity especially for the far-sided winger to make blindside runs into the box. 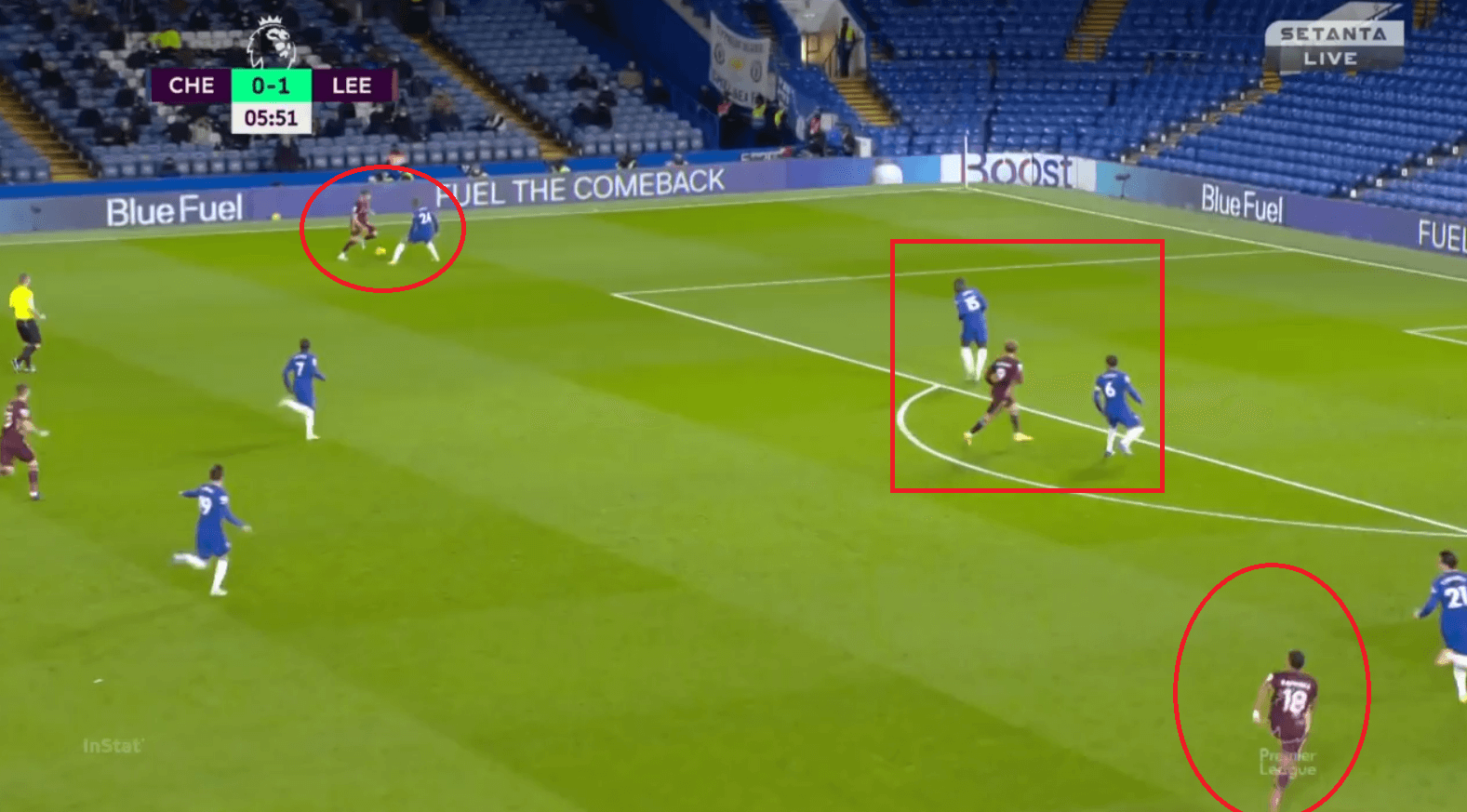 They would look to switch the ball into the flanks and here they would deploy combinations and form triangles using their midfielder, winger, and full-backs to get into the penalty box. Third-man runs were very much part of their plans to break the Chelsea defence. In the image below, we can see that Harrison holds the ball and passes to Klich and he immediately makes a run for a one-touch pass. We can also see Alioski making an overlapping run in case Klich’s passing option to Harrison is halted. 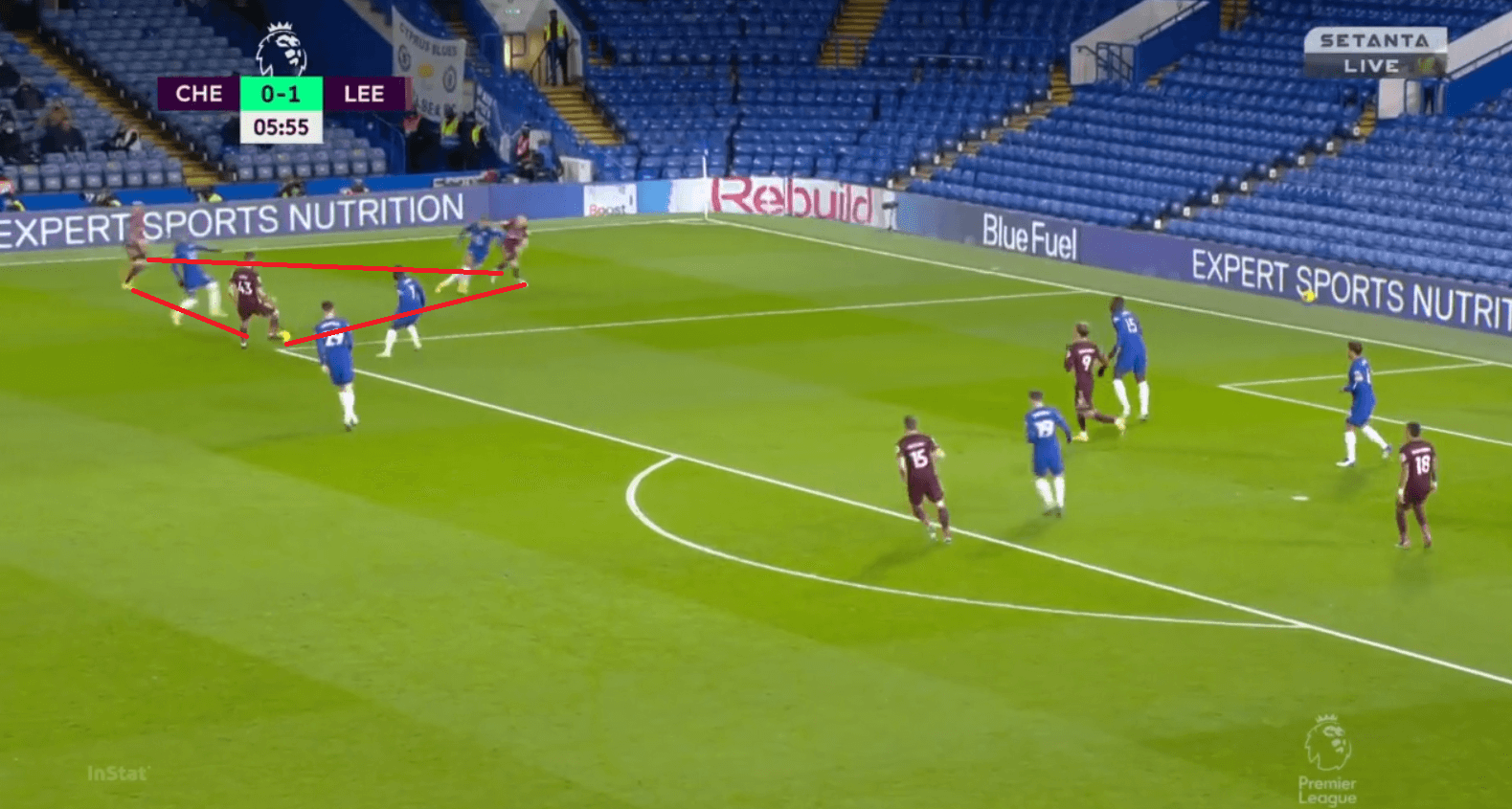 While the three players look to work their way into the box, Leeds ensured that they had a minimum of three other players already present in the box in case a cross had to be played from the wings. This gave Leeds very good flexibility in terms of their play as they mixed direct play with some intelligent passing and movement. Their first goal was as a result of this directness. Kalvin Phillips found space in the wide region as Reece James went higher to overlap, leaving a huge gap in that region. Phillips from that space played a beautiful pass in behind the high Chelsea defensive line and a misjudgement from Mendy by coming off his line too early gave Leeds the early lead. 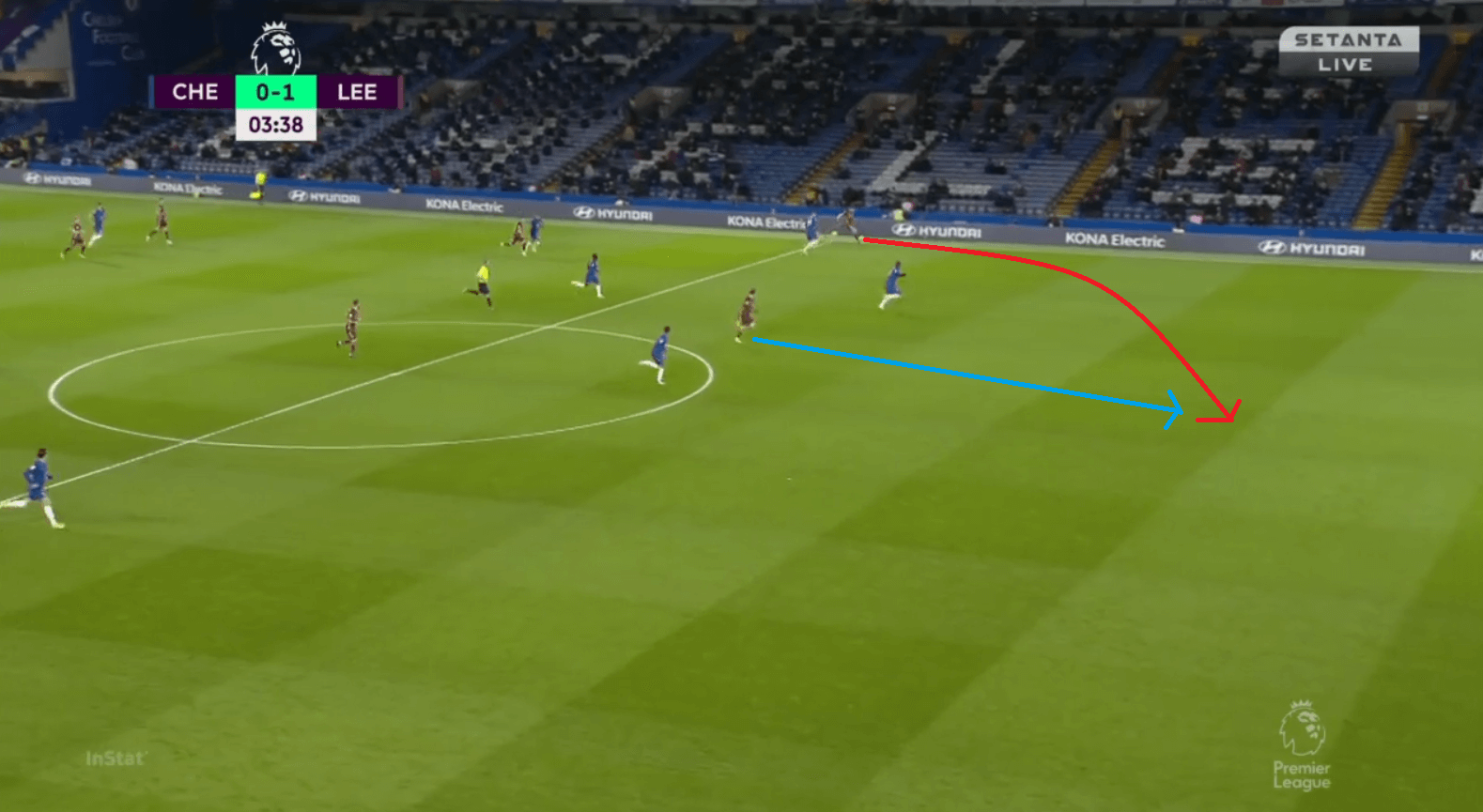 Chelsea without the ball formed a 4-3-3 compact shape and pressed Leeds very high up the pitch with good intensity. Deep in their half, they maintained their 4-3-3 shape with very few spaces in between the lines as the distance between the lines were very minimal. 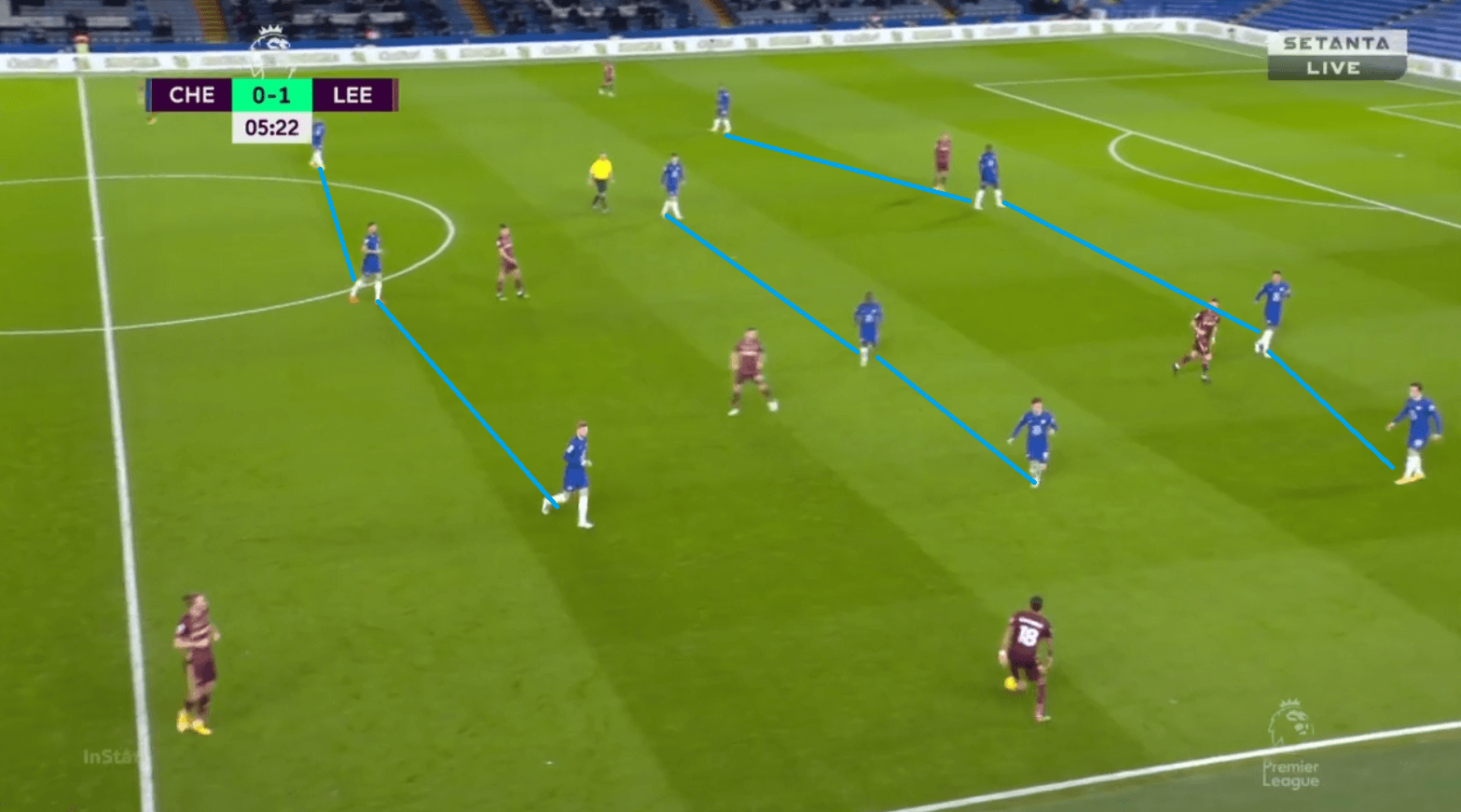 The wide forwards Werner and Ziyech used curved and bent runs to press the Leeds centre-backs so that they covered the passing lane from the centre-backs to the full-backs. This is similar to what Klopp asks his wingers to do at Liverpool. In this way, they took out four players by defending with just three again, giving them a man advantage in the defensive third. 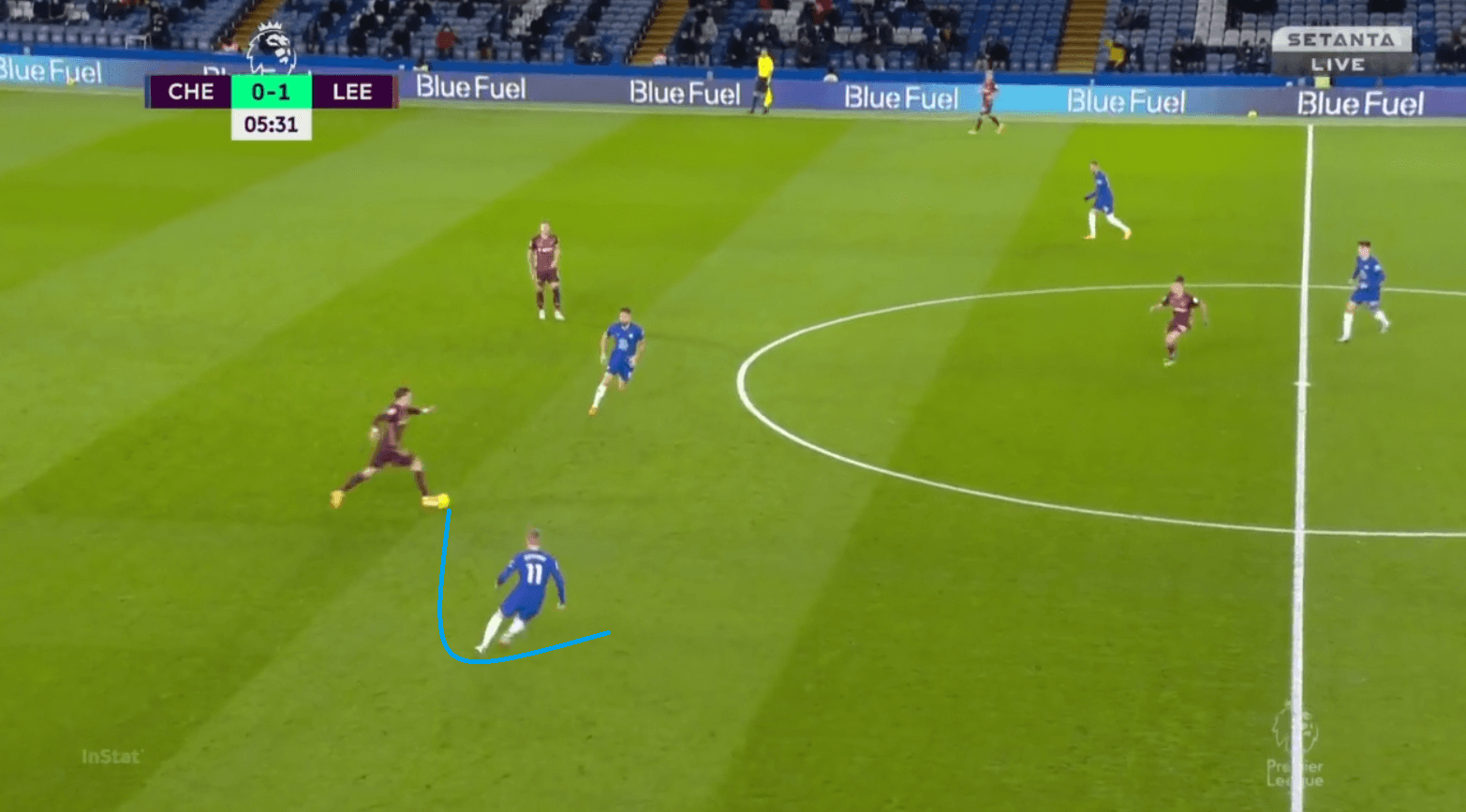 Giroud played the Firmino-esque role as he closed the passing lane to the deepest central midfielder Phillips by pressing the centre-back with good body posture and ensured that Phillips’ influence was taken out of the game. Leeds struggled in this phase as they did not look to commit another midfielder deeper to help Phillips but found a way to go out to the flanks and build using the wide regions. 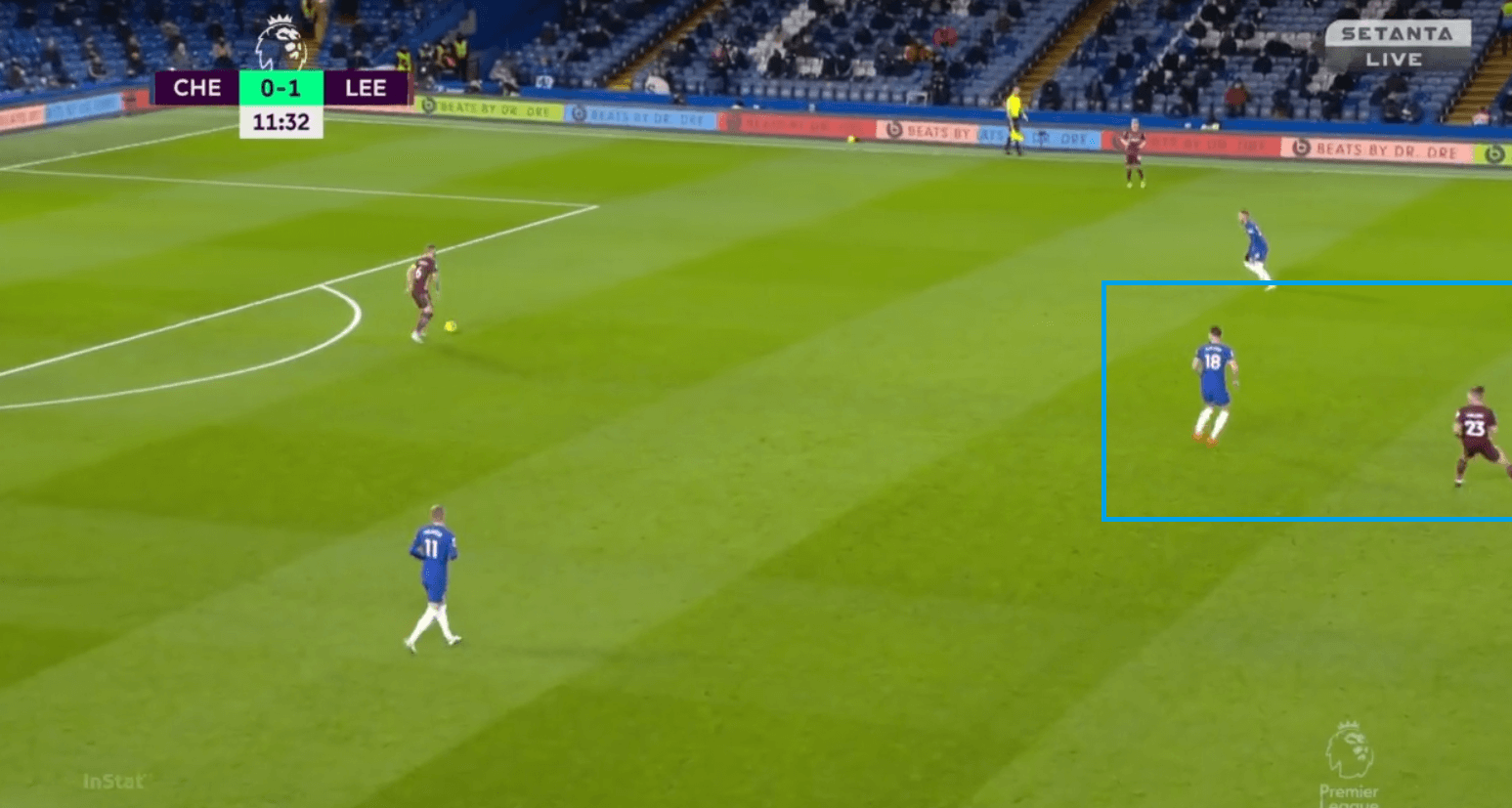 Chelsea eventually defended well as the game went on and were able to stop many of Leeds’ attacks in the final third.

Chelsea added another goal in injury time and sealed the three points to take the deserved win. The win took them to the first spot in the league with one point ahead of Spurs and Liverpool, who are yet to play their matches as have crucial battles against Arsenal and Wolves respectively.