La Liga remains as unpredictable as it was after last weekend’s fixtures. Julen Lopetegui’s Sevilla welcomed their gaffer’s ex-team, Real Madrid, and were expected to take away all three points from the struggling Los Blancos.

However, Zinedine Zidane’s troops showed quality to counter their hosts’ tactics and record another victory to their tally. This tactical analysis will dissect both teams’ approaches to see how the game was played out in a tactical sense.

Sevilla were able to deploy a rather strong XI for the clash against Real Madrid. Among the notable absentees were Marcos Acuña and Sergio Escudero, resulting in Lopetegui opting to put Aleix Vidal, whose natural position is right-back, to the left-back position. Yassine Bounou was in goal since Tomáš Vaclík is still out and ahead of him were Diego Carlos, Jules Koundé, and Jesús Navas.

In midfield, Sevilla went with Ivan Rakitić and Joan Jordán as the no. 8s while Fernando was once again the sole pivot. Finally, in the frontline, Luuk de Jong led the lines through the centre and was flanked by Munir El Haddadi on the left and Lucas Ocampos on the right.

The Andalusians were deployed in a 4-3-3 formation. 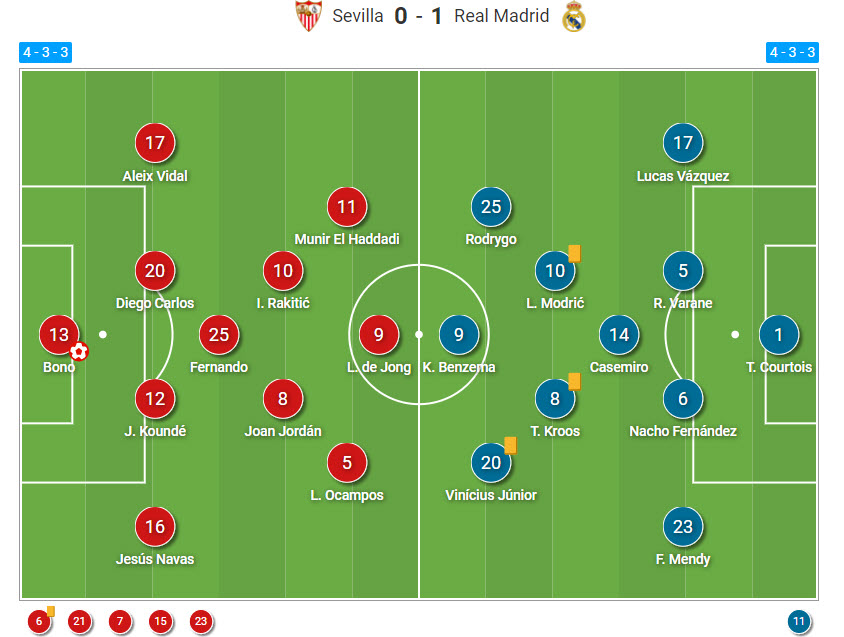 On the other end, Real Madrid are still riddled with injuries. Thibaut Courtois started in goal, as was expected, but had a rather mixed defensive line for cover. Lucas Vázquez was relegated to the right-back position with Daniel Carvajal’s absence and without Sergio Ramos, who’s reportedly fit but Zidane didn’t want to risk him. Raphaël Varane was partnered by Nacho in the middle and on the left, Real went with Ferland Mendy.

In midfield, we saw the old trio of Luka Modrić, Toni Kroos, and Casemiro who were Zidane’s original choices back in the day. Up front, Karim Benzema led the lines as always and was flanked by two young wingers, Rodrygo Goes and Vinícius Júnior.

Under Lopetegui, Sevilla transformed into a team that thrives on possession and has the mechanisms as well as the tactics to keep the ball and progress up the pitch. That part was also decent against Real Madrid. However, once they reached the final third and the away side set up their defensive block, the Andalusians simply couldn’t breach it.

There were a couple of general set-ups Sevilla used when on the ball and they were all with an aim to find space for their dropping no. 8s to receive the ball and orchestrate attacks. 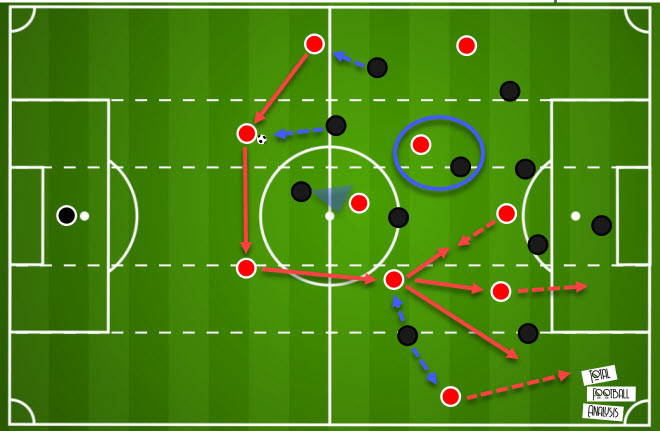 In the graphic above, you can see a very usual structure with the centre-backs in possession, the left-back closer for support, and both the pivot and one of the central midfielders closing in as well.

Real Madrid, on the other hand, mostly defended in a 4-1-4-1 structure which went from a mid-block into a high press with similar mechanisms. First, Benzema would track the ball and try to keep Fernando in his cover-shadow. Once the ball was recycled between the centre-backs, Modrić’s and Rodrygo’s press was activated with the former pressing the central defender and the latter the full-back.

Zidane wanted to collapse on the ball near the touchline or force Sevilla into a blind clearance. This approach worked quite well, especially in the early stages of the game when Real Madrid forced a lot of mistakes out of their opposition. However, by recycling the ball from one side to the other, Sevilla were still able to exploit gaps and lose the markers in transition, as is shown in the initial graphic above.

Notice in the example above how that often looked on the pitch. In this instance, Óliver Torres has possession of the ball on the left, lays it off to his backline, and then shifts over to the other side of the pitch to receive it once again in a pocket of space.

The main thing is to recycle the possession quickly so that Real Madrid’s block can’t adjust in time, resulting in defenders losing their markers and space appearing between the lines. From that position, Torres can deploy a pass into his forwards or an overlapping full-back, depending on the situation.

But apart from such a scenario where the first phase of attack is solely on the centre-backs finding the midfielders in pockets of space, Sevilla were mostly found in a three-man backline throughout the game. 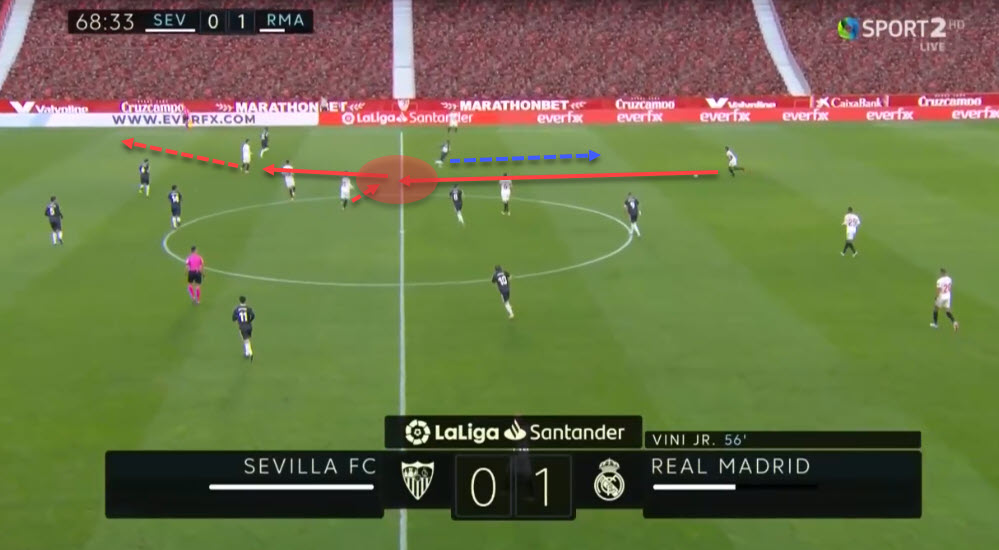 Once again, the principles are very similar but are achieved through slightly different means. With three players in the backline, Lopetegui has forced Real Madrid into committing players from the second line, creating those pockets of space we’ve mentioned earlier in the tactical analysis as crucial to their progression of the ball.

The guests’ 4-1-4-1 system was manipulated so that Sevilla can access the middle third of the pitch. Above, Casemiro is deep, Kroos is on the pivot, and Vinícius has to engage the ball unless they want to give the carrier too much time and space to deploy it towards the danger areas.

But that movement also creates a pocket behind his back, enabling Sevilla’s backline to send a piercing pass towards the midfielders. We can see a very similar example down below as well. 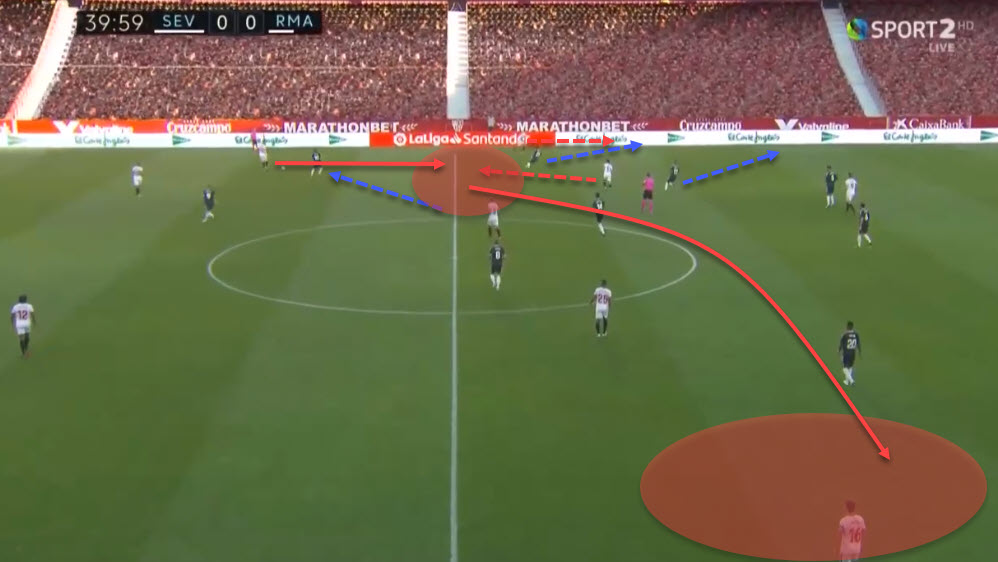 This time, it’s a combination of movement manipulation and the right space occupation that enables the home side to progress. Firstly, a back three is once again formed in the backline which, as we now know, forces Real Madrid to engage the second line.

After that, we see the full-back burst forward, dragging two defenders deeper and giving enough freedom to the midfielder to drop and receive the pass. This puts Sevilla in a great position to advance through any of the aforementioned tactics or simply by swapping to the other, less-marked side of the pitch.

But the problems started happening once the final third was reached. Of course, a lot of credit has to be given to Real Madrid who both capitalised on the early mistakes of the hosts and were compact and disciplined enough to shut down their advances efficiently.

Mostly we’ve seen them in that 4-1-4-1 or a 4-4-2 structure off the ball and they pressed in similar systems as well. However, it does feel like the high press in the final third was still not as effective as the mid-block with a dosed aggression. 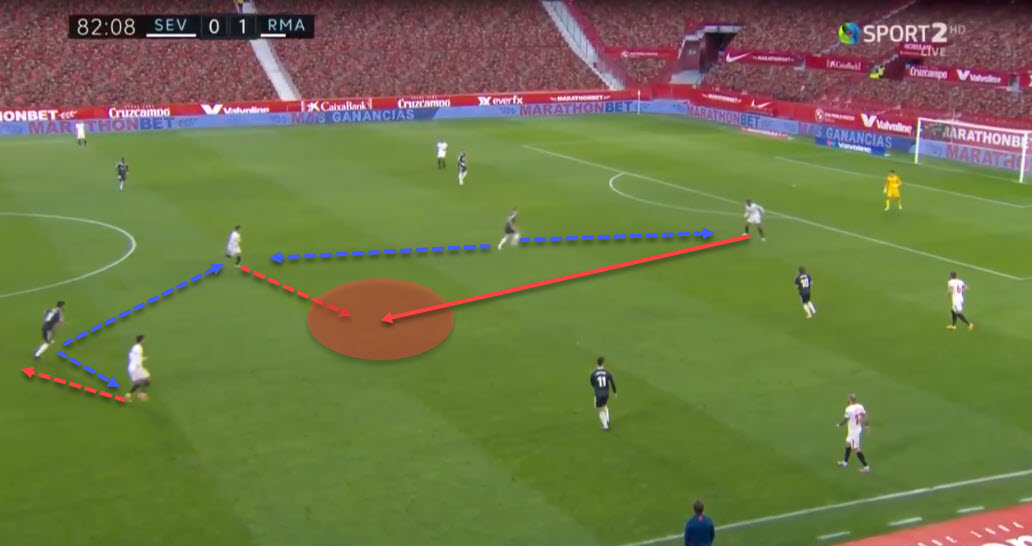 For instance, look at the example above where Sevilla force two Real Madrid’s defenders into a decisional crisis and it results in one of the players always being free to receive. First, it’s the centre-back who has the time to deploy the pass, then it’s the midfielder who can’t be closed down in time, and finally, it’s the player highest up the pitch who can freely progress into the final third.

Sevilla did get a couple of good chances towards the end of the game when they had full control and Real Madrid were in turtle mode but despite bombarding the box and dominating possession, they simply had no clear way in at all.

The visitors were definitely more dangerous on the night and deservedly took away all three points. Zidane identified his win conditions and managed to execute it well. Of course, keeping a disciplined defensive line was one of them, but exploiting Sevilla’s aggression to create favourable situations out wide won them the game in the end.

Below, you can see a very specific and yet general approach from Real Madrid in the game. 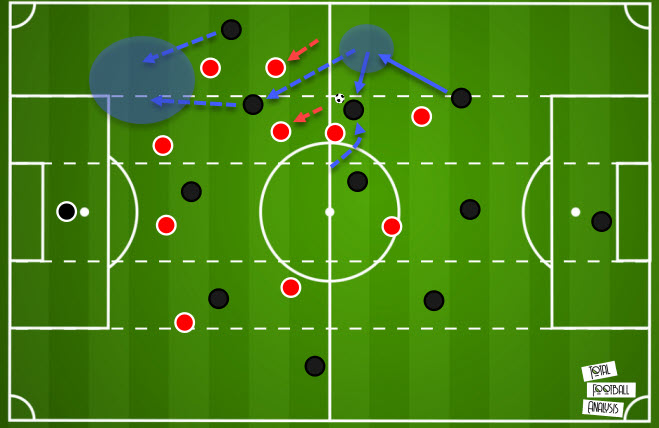 The Los Blancos would usually drop Kroos into the backline, mostly as a left centre-back, to create a back three. Meanwhile, Modrić and Casemiro would float nearby to offer vertical passing options against Sevilla’s 4-4-2 mid-block. However, it was the combinations with the full-backs that were used to eject the wingers into space.

In the example above, it’s Vázquez who combines with Modrić and after deploying a pass into the Croatian maestro, he underlaps and takes two defenders with him. This leaves Modrić with just one player to deal with and after shrugging him off, he can look to play a pass into either Vázquez, who’s now got an open channel to run into, or Rodrygo on the same line.

This effectively creates either a 2 v 1 situation on the Sevilla left-back or at the very least, an isolated 1 v 1 duel for Rodrygo. The key was always for the full-back and the midfielder to work in tandem to occupy the defenders, establishing the 1 v 1 scenario out wide.

Below, you can see another overload created on Sevilla’s left side of the pitch. Real Madrid have attracted the press to the left and will then use Kroos’ range to find Rodrygo on the opposite flank. 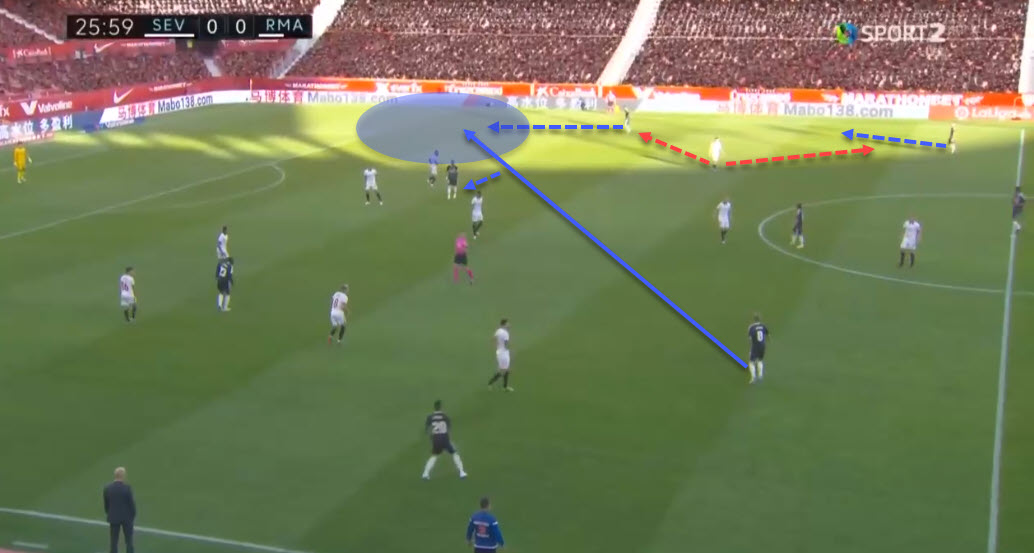 Notice how Benzema’s movement has also forced Sevilla’s centre-backs narrow and towards the centre while the wide man has to cover both the full-back and the winger. These types of situations were seen quite often throughout the 90 minutes and Real Madrid took full advantage of it.

If we take a look at their pass map on the night below, we can see that there’s a strong connection between their no. 8s and the wingers, as well as the full-backs. This is both a result of the constant combinations out wide to outplay the press and also of the midfielders ejecting the wingers into space. 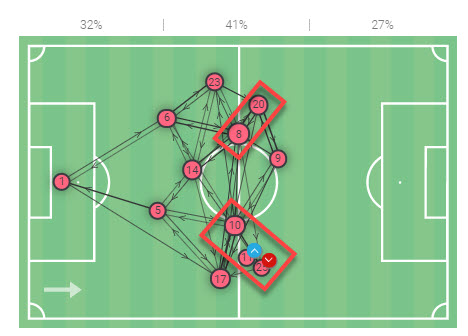 Of course, it’s not always the winger on the same side that can benefit from a piercing long ball, as we’ve seen from the earlier example above where Kroos combines with Rodrygo. It doesn’t surprise then that the winning goal was scored through a similar pattern of play.

However, in that action, Real Madrid used the great movements of both Benzema and Vinícius to manipulate Sevilla’s backline into dropping and thus leaving too much space behind their backs to exploit.

You can see in the image below how that translated onto the pitch. Firstly, notice how Kroos creates a 3 v 2 situation against Sevilla’s first line of defence, ensuring the ball can be progressed cleanly from the backline. 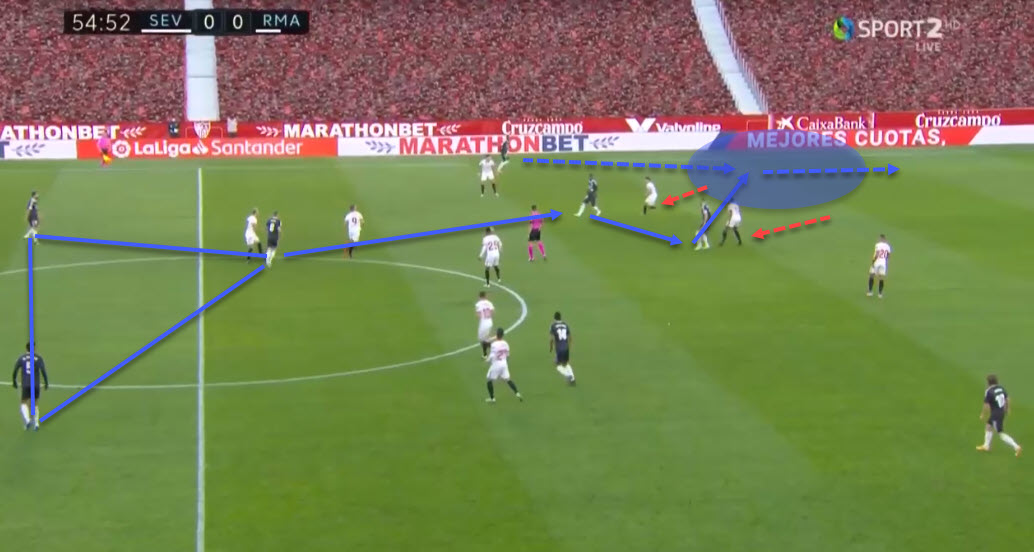 Once that is achieved, it activates the movement of Vinícius and Benzema. They both drop and the former receives the ball first, laying it off to the latter who flicks the ball over the top and into Mendy’s path.

Once again, it transitioned into an isolated duel out wide, only this time it was the battle of full-backs instead. Still, the principles remained mostly the same and Los Blancos manipulated the situation perfectly.

Sevilla were fairly aggressive throughout the match and mostly defended in either a 4-4-2 flat or a 4-1-4-1, depending on how high they would press. Once their triggers were activated, they mostly advanced in the latter structure, as can be seen below. 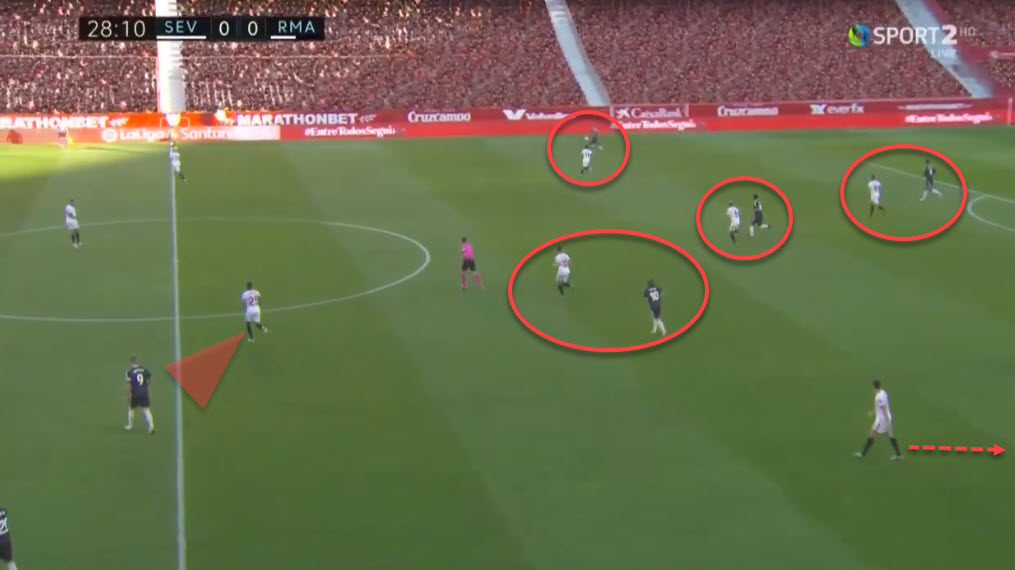 In that situation, Lopetegui instructed his men to go with a heavy man-marking approach which did cause Real Madrid some troubles in the opening stages of the game. However, despite a good effort in all phases of play, they couldn’t find a way towards a draw or a victory.

Even though the final stages of the game were dominated by Sevilla, Real Madrid were still the deserved winners. The home side struggled to create much after reaching the danger areas, while the visitors exploited the wide areas really well.

With this victory, Zidane is once again close to the very summit of the La Liga table and their city rivals, Atletico Madrid. Let’s see if they can continue the trend moving forward.