Real Madrid fell to yet another humiliating home defeat as their poor form continued in 2020/21, with Alavés running out 1-2 winners at the Estadio Alfredo Di Stéfano thanks to goals from Lucas Pérez and Joselu, despite Casemiro’s late consolation strike.

An early penalty for a foul from Nacho meant that Pérez had the chance to give his side the lead, with Joselu later pouncing on a Thibaut Courtois mistake. Casemiro did reignite some hope late on, bundling the ball over the line from a corner. The result means that Real Madrid fall to six points and a game behind rivals Atlético Madrid while being seven points behind leaders Real Sociedad.

This tactical analysis will look at how Real Madrid fell to defeat to Alavés. It provides an analysis of the tactics of both Zinedine Zidane and Pablo Machín in this La Liga fixture to see how Machín secured his first away win over Los Blancos, never having been beaten by the reigning champions in a home fixture. 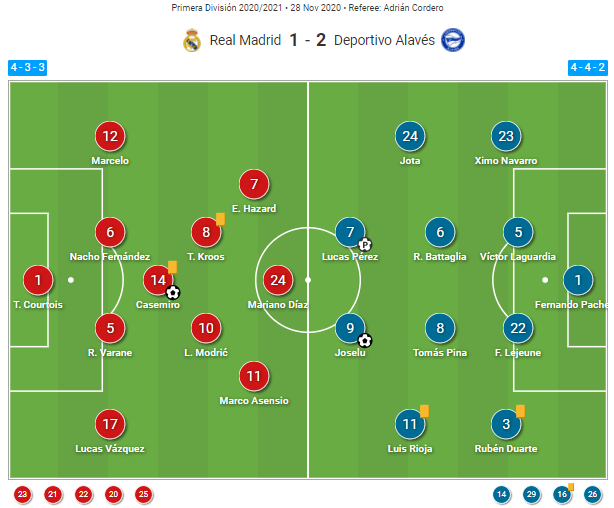 With Sergio Ramos and Fede Valverde among those to remain sidelined, Mariano Díaz also kept his place thanks to a new injury concern with Karim Benzema. Zidane also opted to select Marcelo over Ferland Mendy at left-back in a surprise move given the other defensive frailties forced upon him.

Machín stuck to the side which drew with Valencia, offering real flexibility to transition between a back five to a back four or a back three, with players stepping up and sitting back according to the phase of the game and whether or not Alavés are in possession.

In recent months, when Zidane has selected Marcelo on the left, many sides have opted to focus on that flank to attack the spaces which the Brazilian leaves in behind. However, Alavés took the opposite approach, away from Marcelo, and instead looked towards the right. There, they identified open spaces which became available with Marco Asensio advancing and pushing up high, Luka Modrić not dropping deep enough and Lucas Vázquez being left to handle a triangle of Alavés players building around him. As a makeshift option in the right-back position, it was an area that Luis Rioja could exploit well when Rubén Duarte pushed up.

As can be seen here, Duarte would advance, with Joselu dropping. Without Modrić covering that gap, Raphaël Varane and Vázquez were forced up to make the pitch more compact and deny space. That allowed Rioja to run beyond Vázquez in behind, while it also enabled a greater space vacated by Varane to be exploited by Pérez. Such manoeuvres led to the Real Madrid defence becoming stretched and disorganised, which was key to the struggles of the side to contain the energy of Alavés’ attack early on in the tie.

As the game went on, Casemiro would sit deeper to cover Varane, but Vázquez continued to be exploited. His positioning was evidently not that of a natural in his position, instead, allowing space in behind for pacey runners. It meant that Alavés attack became rather lop-sided, with all eight of Alavés’ crosses coming from their left flank. The approach worked and unsettled the Real Madrid defence, forcing their defensive line to drop deeper to attempt to reduce the amount of space opening up in behind.

And how Alavés blocked the left

Alavés were clear in their approach to be one-sided in how they focused their attacking game plan. The same also applied when they were defending, as they looked to overload their own right-hand side. The Alavés side defended in a very narrow and compact way, with one of the two forwards remaining in attacking while two others would drop to form a 5-1-3-1. By positioning themselves on one side, they could cut off any space for Marcelo or Eden Hazard, until his injury in the first half, and instead, look to force play back.

The intention of this was to force Real Madrid to move play across to the right. Here, Alavés would allow Real Madrid time and space to work with. However, they knew that their opposition would tend to drift towards the left and lacked real mobility in midfield. While runners like Valverde would provide more options, the immobility of the Real Madrid midfield trio made them fairly static and prevented quick transitions. This meant that the ball was fed to Vázquez, who was marked, with Asensio looking to make runs in between two Alavés defenders sitting deep.

The result was that Vázquez and Asensio would be forced to cross hopelessly, with the ambition that someone could connect in the box. Those two players alone accounted for 71.9% of Real Madrid’s crossing, with Vázquez alone constituting 43.8%. It would be harsh to criticise Vázquez himself as the team did rack up 3.05 xG, many of which came from crosses into the box from the right. This was a clear case of Real Madrid lacking a proven finisher in attack, as Mariano failed to convert his chances while others, more experienced leaders who would be expected to step up, failed to take advantage of their chances, with Toni Kroos having the highest xG of all, other than goalscorer Casemiro, with 0.78 xG.

The other notable tactical aspect of this game was Alavés’ high press. This season, we’ve seen how Real Madrid have struggled to break down teams who were defending in a low block. Without space to exploit, they failed to create chances. However, Machín was brave and stuck to the approach which has worked successfully for him when playing at home with the likes of Girona and Sevilla. That involved a high press as Alavés would look to cut off the Real Madrid attack at source and instead force the opposition into defensive errors.

Defensive errors would be the cause of Alavés’ second goal, with Courtois rushed into a pass which ended up at the feet of Joselu. But there were earlier warnings too. As can be seen below, a Nacho pass back to Courtois was misplaced under pressure, and the Belgian rushed out wide. With Pérez closing down rapidly, Courtois didn’t take the easy option of putting the ball out of play and instead looked to cut across goal, a basic mistake. As can be seen, Joselu pressed high from deep and almost beat Varane to the ball, just deflecting off his shoulder. The result would be a rapid intensity and speed which would expose the vulnerabilities of a makeshift Real Madrid defence featuring just one of their first-choice back four.

With 58 interceptions recorded, no-one has produced a higher figure against Real Madrid since lockdown in March. This was in part due to the way that Alavés stuck to their tactic. As can be seen below, even on the hour mark and with a two-goal lead, the two forwards would step up to press the central defenders, with the midfield line of three then stepping up into the space behind. The end result would be five Alavés players operating in between the Real Madrid defence and midfield lines, making it easy to turn over possession if there were any slip-ups from Los Blancos.

This bravery could easily have backfired. Alavés struggled when they were pressed themselves, and Kroos’ aforementioned chance came from a similar error enforced by a high press. It was only due to the fact that Alavés would divide into two, with five players pressing and five forming an organised, compact backline, that the risk could be minimised. Real Madrid’s lack of clinicality fed into this, helping Fernando Pacheco and his defenders to keep a clean sheet for 88 minutes of the tie.

It would be overly simplistic to take a look at this game and look to criticise Real Madrid. They were, in fact, rather efficient. Posed with a difficult challenge in a very well-organised side, they created enough chances and a high enough xG to have deserved a clear win. Had refereeing decisions gone differently, the storyline could have been very different. If Zidane and his players were guilty of one basic mistake, it was to be overly confident. Not expecting Alavés’ high press and bravery, they were left exposed, and their mistakes only served to give opportunities to the visitors.

However, Alavés were superbly set-up with an intelligent approach. Their press and targeting of the right exploited the areas where Real Madrid were weakest. While spaces typically open on the left of their defence, for the first time a team focused almost entirely upon how high up Modrić pushes without Asensio dropping back to cover. That midfield space caused the chaos which would create other chances for Alavés by disrupting the Real Madrid defensive set-up.

Machín deserves great credit for getting his team so organised and to flow through and transition smoothly between two or three different formations. Real Madrid, on the other hand, lacked that same kind of flexibility. It must be recognised that the hosts were contending with a number of important injuries, but their response and lack of tactical flexibility again points to a common complaint of Zidane’s weaknesses as a tactician and a coach.