Sunday’s round of Serie A fixtures saw league leaders Milan continue their unbeaten run and maintain their spot at the top of the table against Fiorentina in a 2-0 win at the San Siro.

This win was not an easy three points for Stefano Pioli’s side by any stretch of the imagination, and the Rossoneri really struggled throughout the match, scoring from a corner and a penalty in order to extend their lead at the top of the league to five points over bitter rivals, Inter.

New manager Cesare Prandelli has had a difficult start to life as Fiorentina boss having picked up his second loss in the league in only 2 games, however, La Viola were far better in this game than in their previous Serie A outing against Benevento, managing to nullify Milan’s attacking threat from open play for the most part.

This article will be a tactical analysis of Milan’s win over Fiorentina. It will be an in-depth analysis of the strengths and weaknesses of both sides in their tactics, throughout the game, as well as taking a look at where each team could have improved in their set-up. 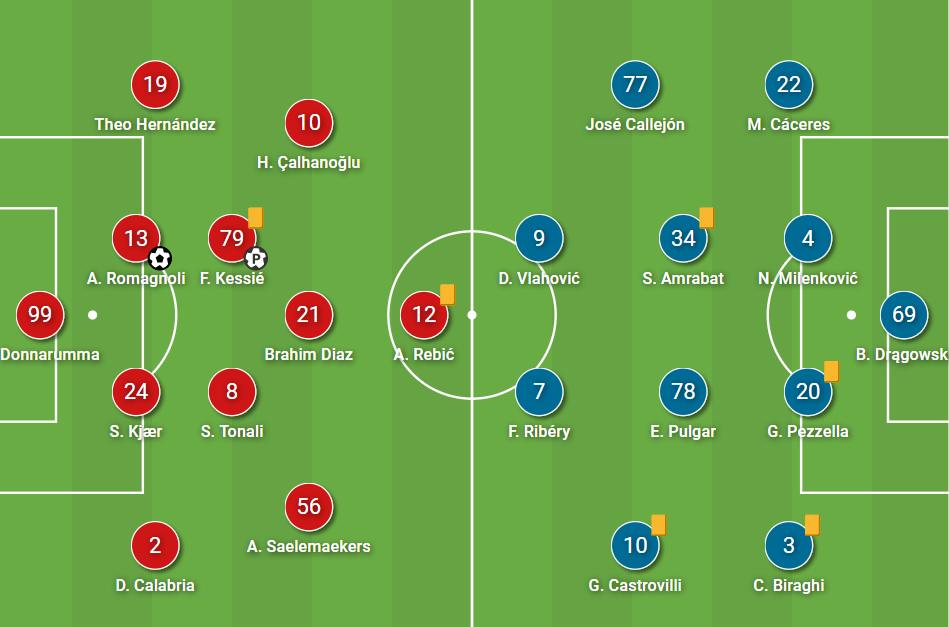 Milan deployed their usual 4-2-3-1 formation, which has worked so well for them this season in all competitions as it really suits the personnel available in the squad. In contrast with their midweek game against Lille, there were a handful of changes to the starting eleven.

Pioli reverted back to his typical back four, which consisted of Davide Calabria, Simon Kjaer, Alessio Romagnoli, and Theo Hernandez, with Gianluigi Donnarumma in goal behind them.

Franck Kessie partnered next to Sandro Tonali in the double-pivot for the Rossoneri due to the absence of Ismael Bennacer through injury, with Brahim Diaz and Alexis Saelemaekers also coming into the starting lineup in place of the injured Samu Castillejo, and Jens Petter Hauge.

For Fiorentina, the former Italian national team boss made a whole host of changes in comparison to their previous league fixture against Benevento. Against Pippo Inzaghi’s side, Prandelli deployed a 4-2-3-1 formation, however, in this game, he deployed more of a 4-3-3 shape, particularly when his side was in possession. Out of possession, they dropped into a 4-4-2 shape with Franck Ribery up top next to Vlahovic.

Martin Caceres came into La Viola’s defence for this game, replacing Igor Julio, with the Uruguayan playing as a right-back, whilst Nikola Milenkovic played as a centre-back next to German Pezzela.

Their central midfield trio consisted of Erick Pulgar, Sofyan Amrabat, and Gaetano Castrovilli, whilst Dusan Vlahovic was deployed as the starting centre-forward, supported by both Ribery and Jose Callejon.

Milan playing direct from the back:

Under Pioli, Milan have never been a side hell-bent on ball retention, and they tend to be very flexible in their attacking approach. Against teams that defend deep, they have creative players who can break their opponents down, and against teams who prefer to keep the ball, they are excellent at maintaining a solid defensive shape and hitting their opponent on the break.

In this match, their approach was the former. Fiorentina had approximately 54.7 percent of the ball possession compared to Milan’s 45.3 percent, meaning that the Rossoneri were forced to adapt their game and sit deeper, playing more direct passes and utilising their offensive transitions to full capacity.

Prandelli deployed a high man-oriented pressing system when Fiorentina were out of possession, in order to regain possession as high up the pitch and as quickly as possible, which can be seen in the following image; 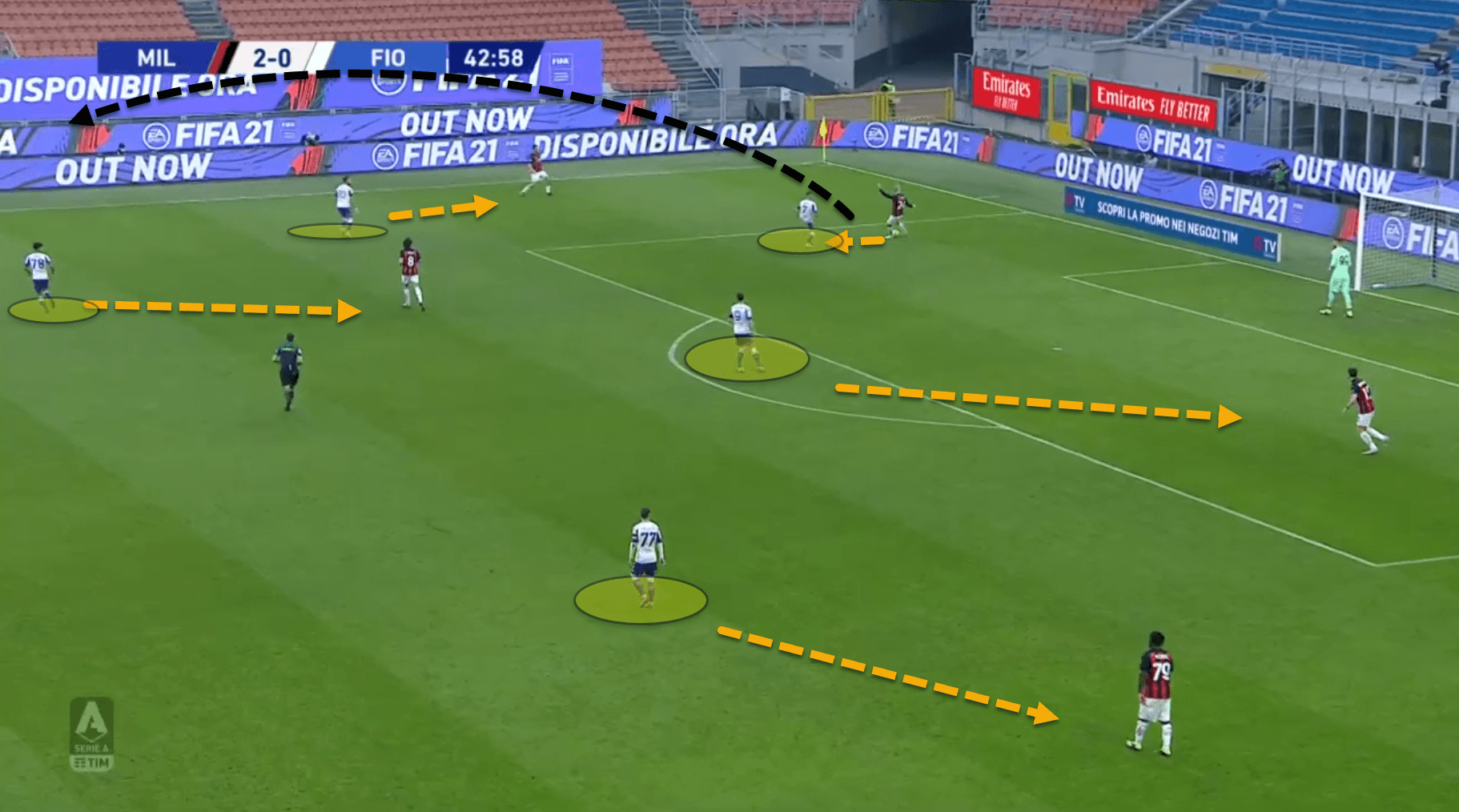 We can see this man-oriented high press used by La Viola put into effect. As stated previously, out of possession, their defensive shape resembled a 4-4-2, which matches up perfectly in a high press against a 4-2-3-1 as used by Milan.

Castrovilli would push out to the left-wing in the 4-4-2 when defending, and as can be seen above, both Callejon and himself were tasked with pressing Milan’s fullbacks in the press. The two centre-forwards occupied Milan’s centre-backs, whilst the two central midfielders, Pulgar and Amrabat, would man-mark Milan’s double-pivot.

In the previous image, Kessie has moved out to the left-flank to become a make-shift left-back, however, the principle still applies.

Milan rarely took a chance of playing out from the back whilst they were in the build-up phase. Pioli clearly anticipated this tight man-marking structure and so he instructed his men to play direct to their forwards in order to bypass the press rather than risking build-up play. Milan played a total of 54 long passes throughout the entire game, nine more than Fiorentina.

Another example of Milan bypassing Fiorentina’s high press by playing direct can be seen here; 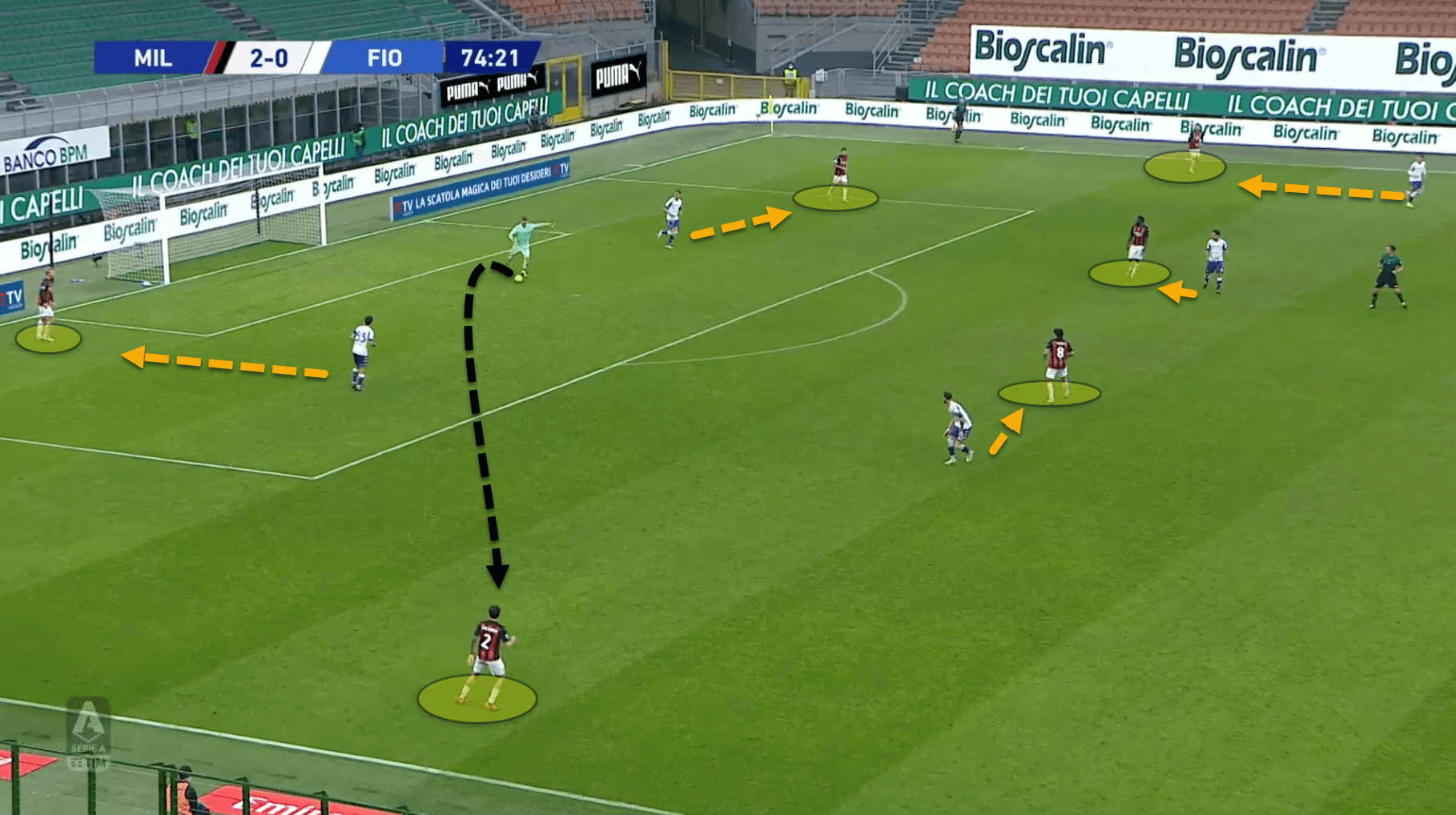 Again, Fiorentina are tightly marking Milan’s player, who are positionally structured in a 4-2-3-1 formation. Instead of playing short to try and build their way through the thirds using short passes, Donnarumma plays direct to the right-back Calabria to bypass the opponent’s press.

In the previous paragraph we discussed Milan playing direct over Fiorentina’s press, however, they also played direct when trying to break through their opposition’s defensive line. This is usually successful for them as they have Zlatan Ibrahimovic to hold up the ball, with willing runners on the wings flanking him attacking the depth of the pitch.

In this match, their persistent attacking of the depth of the pitch worked to a certain extent, but the loss of Ibrahimovic clearly hindered them in their approach as Ante Rebic is nowhere near as good at holding the ball up as the Swedish legend.

In the next image, an example of Milan playing direct to Rebic will be shown. Once Ibrahimovic receives a ball to his feet, he is able to hold off his opponent and try to play in his surrounding runners in behind, which is usually successful due to his physical power to hold off his marker. However, Rebic does not hold these same attributes and it was much easier at times for Fiorentina to win back possession. 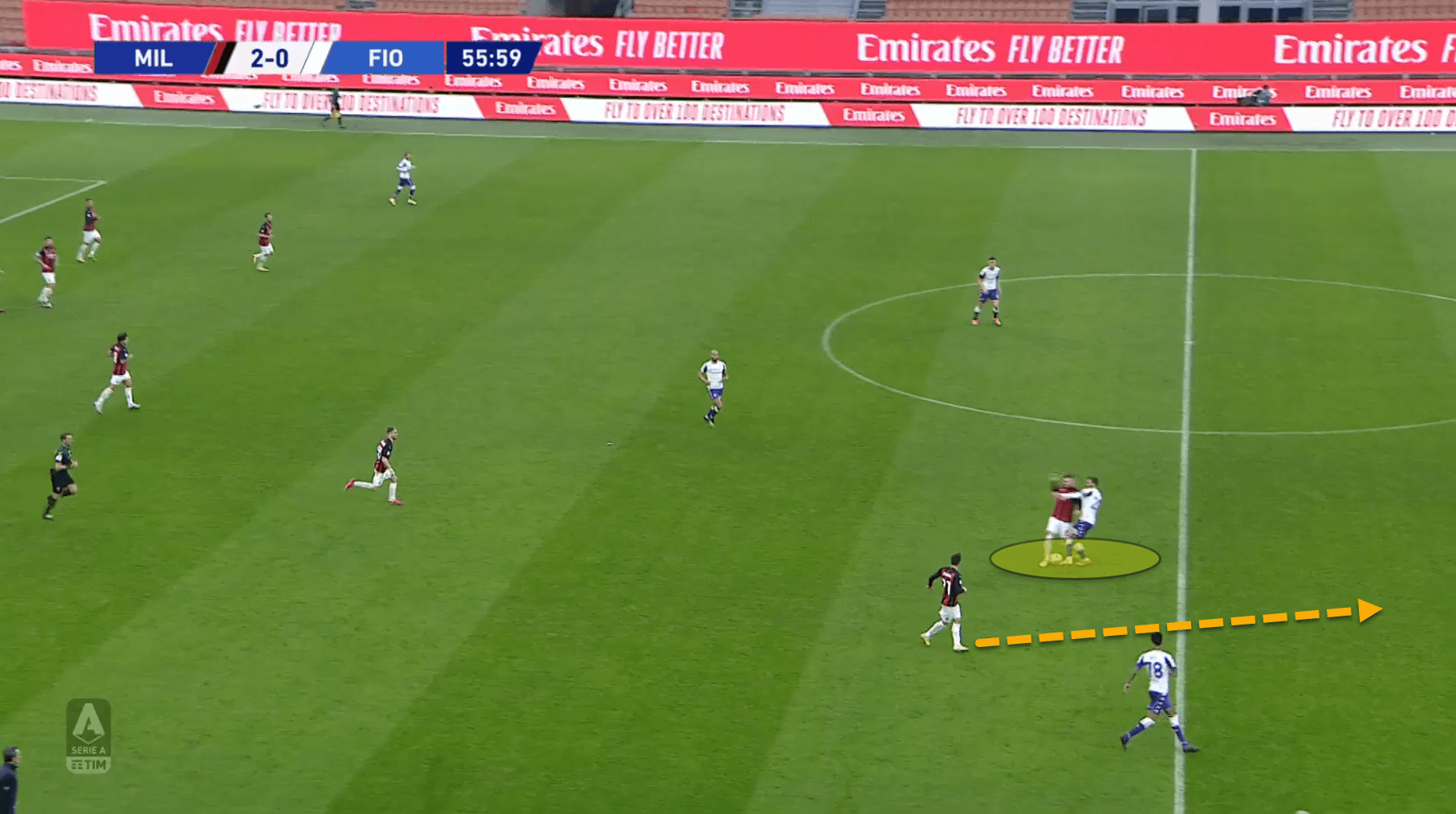 That being said, there were times when direct plays through Fiorentina’s defensive block did work with runners attacking the depth, particularly in the build-up to the foul for the second goal, which was a penalty converted by Kessie to make it 2-0 within the opening 25 minutes. 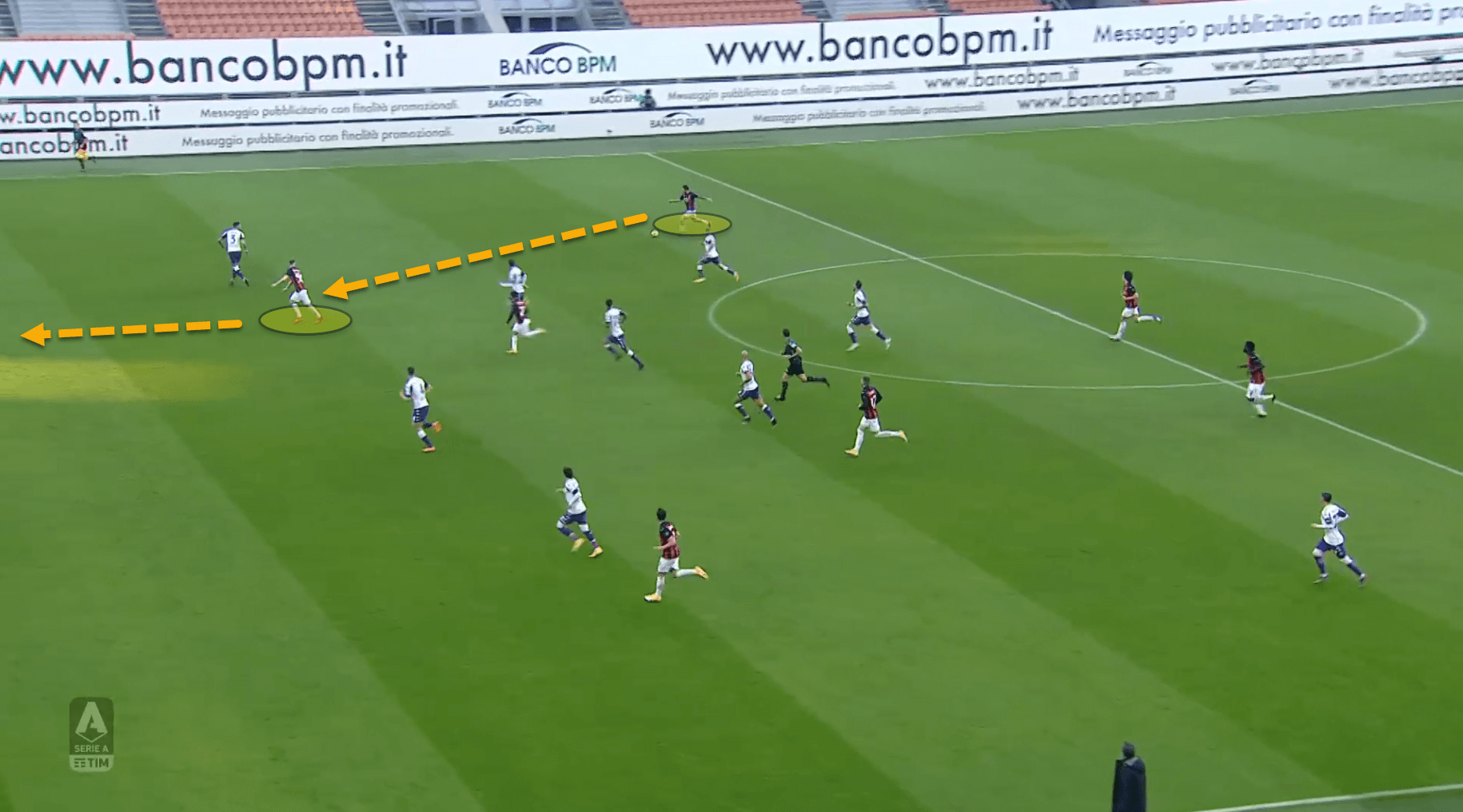 Here, Saelemaekers has made an excellent run in behind the Fiorentina defensive line, which played quite high in this game due to their desire to press Milan high up the pitch. Calabria spotted him and played an excellent direct pass to set him through on goal before he was taken down in the box and the referee awarded a penalty.

Fiorentina’s use of Ribery:

As already stated, the 2-0 scoreline flattered to deceive those who were unable to watch the game into thinking that Milan dominated the match, but this was not the case.

Fiorentina had more possession and also had a number of clear-cut chances to score, particularly in the first half, but due to the lack of a clinical centre-forward, they failed to do so.

When Prandelli’s side were in the second phase of the attack, after bypassing Milan’s high press, Fiorentina’s shape resembled a lob-sided 4-3-3, with Castrovilli pushing into the halfspace from the flank, whilst Callejon pushed further up. 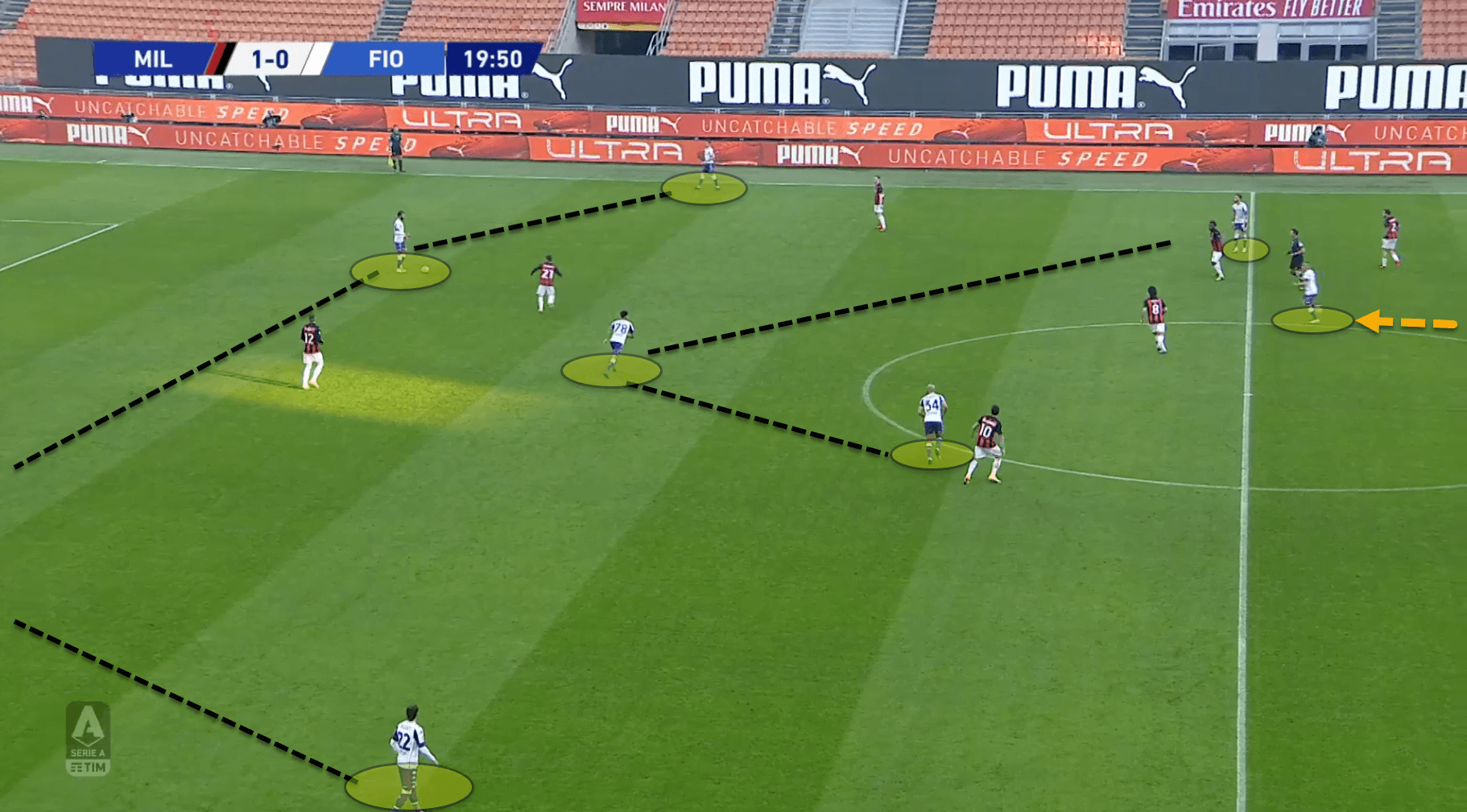 This positional structure can be seen in the image above, however, one of the most noticeable details is the positioning of Ribery. The Frenchman has dropped short and positioned himself behind two players in Milan’s midfield in order to act as a progressive passing option between the lines.

At times, he would even drop short to be a short passing option in order to keep the ball circulating around the backline, looking for an opening in the first line of Milan’s press. This aided his side massively in possession due to his ability to play forward. Ribery finished the game with an 85 percent pass completion rate.

Once his side progressed into the third phase of the attack, also known as the creation phase, Ribery became even more crucial to side from a creative point of view. He was their main creative outlet going forward.

When Fiorentina reached the final third, they would create triangles, particularly on the left flank, with Ribery, Cristiano Biraghi, and Castrovilli, which can be seen in the next image; 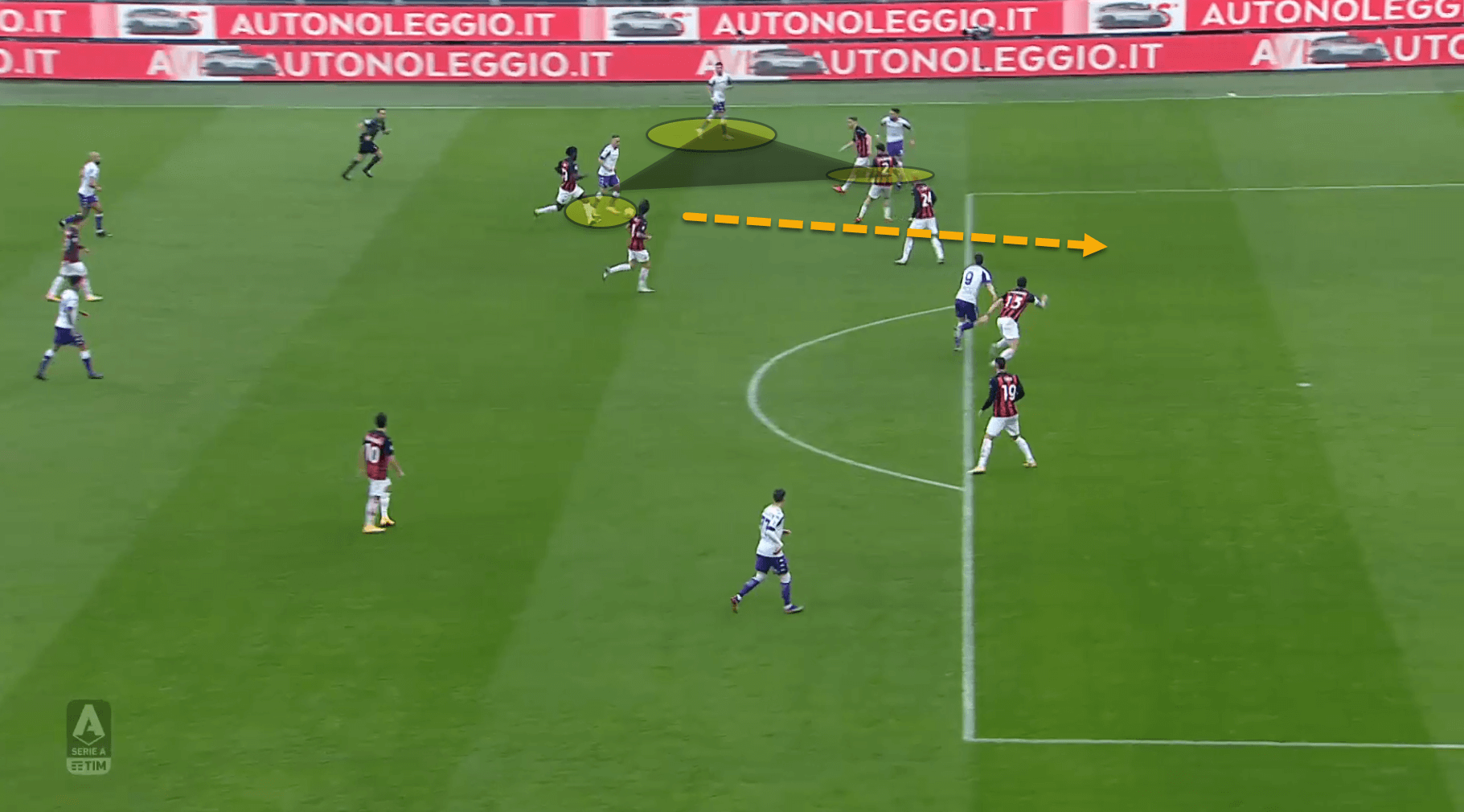 Biraghi would stay wide and hug the touchline, whilst Castrovilli and Ribery would occupy the left halfspace in order to overload this flank.

As can be seen from the image above, the three players in the triangle have forced Milan to commit more numbers to defend the wide area, which has left gaps in the Rossoneri’s defensive line to be exploited with Ribery’s excellent vision and quality on the ball. This was one of the best chances of the game for La Viola, but unfortunately, Vlahic’s shot ricocheted off the woodwork instead of rattling the net.

Another example of Fiorentina’s excellent use of this triangle on the left-wing can be seen here; 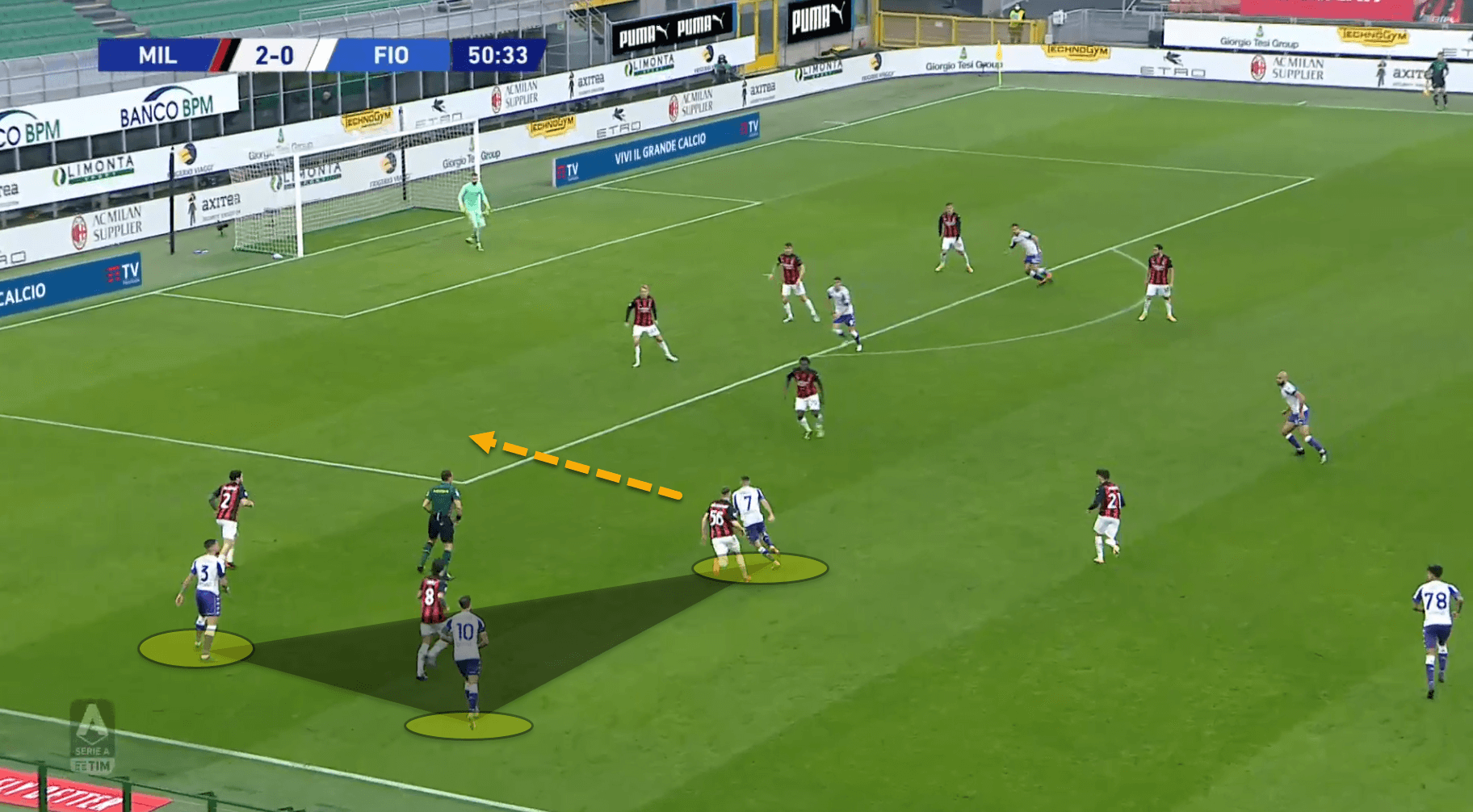 The use of the triangle has forced an opening in Milan’s defence for Ribery to try and take advantage of. Unfortunately for Fiorentina, despite getting themselves into decent positions in the final third, as seen in the two previous images, they could not capitalise on any chances created, mainly due to their lack of a prolific centre-forward.

This was their main attacking threat though throughout the game when they were trying to break down Milan’s mid-to-low defensive block.

Ribery finished the game with 1 key pass to his name, whilst Castrovilli tallied double that number. Biraghi even managed to put 10 crosses into the box, however, none were converted by La Viola’s forwards. If we

From Fiorentina’s 27 positional attacks, 20 were on the flanks, with 11 being out on the left-hand side of the pitch where the triangle was constantly created. 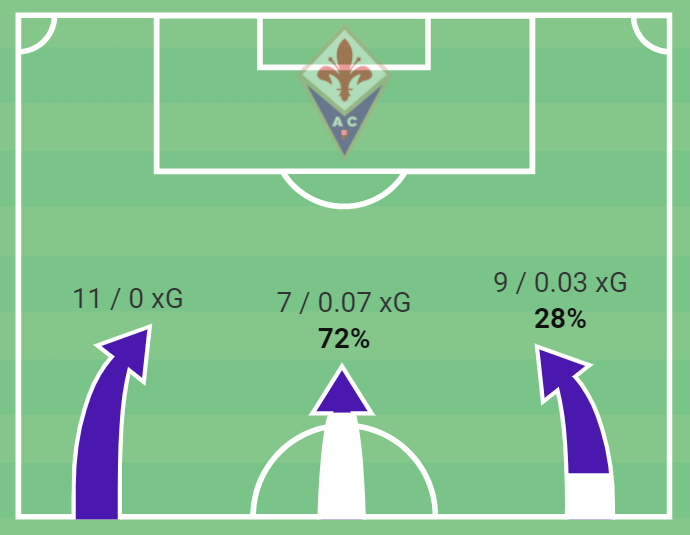 Milan were certainly not at their usual best as this was arguably one of their more difficult wins this season, however, it was a really hard-fought three points, one of which is crucial for any side who are looking to win a league title. Defensively, they were very solid, hence why they kept a clean sheet and going forward they look solid but imperfect, boasting an xG of 3.4.

Fiorentina on the other hand should focus on the positives rather than the negatives of their performance against the league leaders. They did not concede from open play and could have even nicked a goal or two if they had a prolific centre-forward on the field. Prandelli’s side made it a really difficult game for Pioli’s men and put in a much-improved display from their last league outing against Benevento. 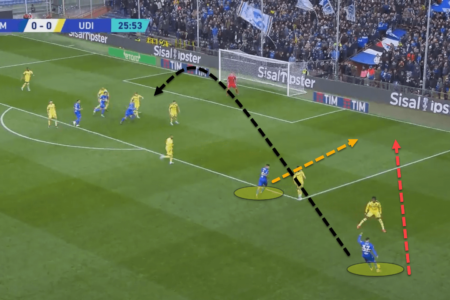 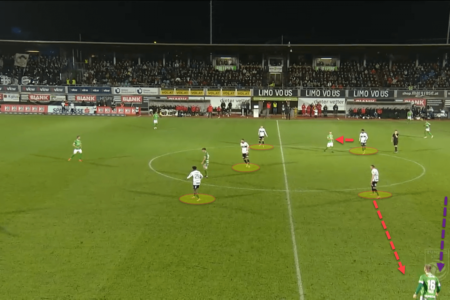