Last Sunday, Real Sociedad hosted Villarreal for a real peak of the table clash in La Liga. This season, we’re seeing the emergence of other title contenders not named Barcelona or Real Madrid, so 2020/21 is shaping up to be a blast.

And perhaps fittingly for two of the top teams in the league, the clash ended in a stalemate with each side only managing to score from a penalty kick. This tactical analysis will dissect both teams’ tactics and tell you how they effectively counteracted each other.

We’ll start the analysis by looking at the team news and shapes in possession. Imanol Alguacil deployed a slightly rotated Real Sociedad side with Álex Remiro in goal and a quartet of Aihen Muñoz, Robin Le Normand, Igor Zubeldia and Aritz Elustondo in the backline.

In front of them, La Real had Mikel Merino and Ander Guevara in a double-pivot, while Mikel Oyarzabal, Roberto López and Ander Barrenetxea were positioned in a three behind the main striker, Willian José.

Most notably, Alguacil left Portu, Adnan Januzaj and Alexander Isak on the bench as Real Sociedad were deployed in a 4-2-3-1 formation. 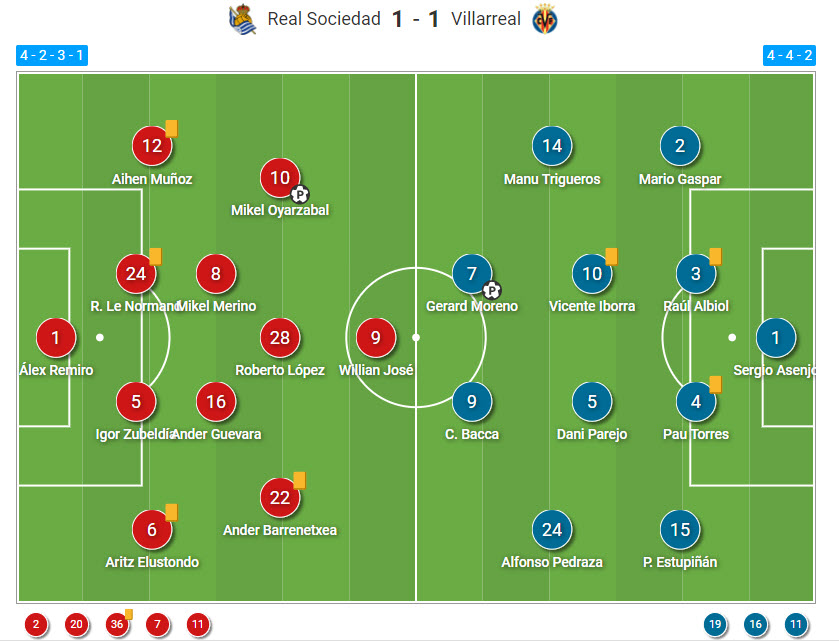 On the other hand, Unai Emery went for a strong lineup with Sergio Asenjo in goal and a defensive line of Pervis Estupiñán, Pau Torres, Raúl Albiol and Mario Gaspar just ahead of him.

In midfield, we saw Vicente Iborra and Dani Parejo more centrally while Alfonso Pedraza and Manu Trigueros were the wide options. Up front, Gerard Moreno and Carlos Bacca led the attack as the likes of Samu Chukwueze and Take Kubo remained on the bench.

Emery opted for a 4-4-2 structure for Villarreal on the night.

The clash was clearly marked by high-intensity pressing tactics by both teams, and for that reason, this tactical analysis will look more in-depth at those defensive structures. However, we’ll touch upon a more controlled possession phase as well.

Below, you can see how Real Sociedad were usually deployed when facing Villarreal’s 4-4-2 mid-block. 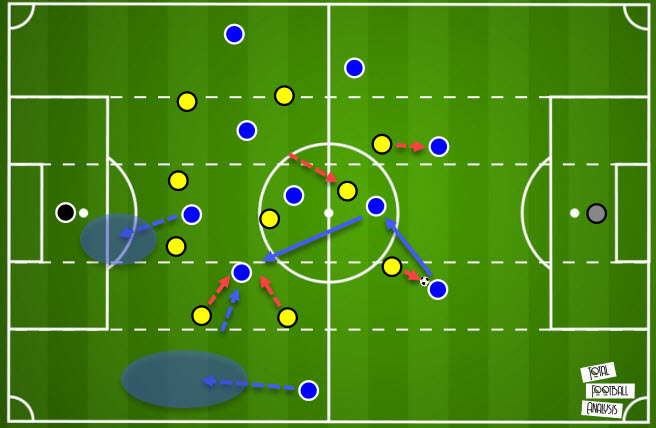 Of course, the build-up would always start with a high defensive line that orchestrated the attacks and a dropping pivot, usually Guevara, providing an additional passing channel. Merino, on the other hand, would stay a bit higher and just above his teammate to offer another vertical option to progress the ball.

However, the key for Real Sociedad was to find their wide forwards in half-spaces. Oyarzabal would often drift centrally while López maintained his position behind the striker. Barrenetxea, on the other hand, was used as a width-provider on the right.

Real Sociedad planned to open the passing channels leading towards Oyarzabal in the pockets of space between the lines. There, the young Spaniard could receive, quickly turn with the ball and connect the thirds or send a ball in-behind the opposition’s defensive line.

Usually, Guevara or Merino were the ones to receive from the backline and drive with the ball until they could find an open channel towards their target. You can see such an example below as La Real outplay Villarreal’s block and get to Oyarzabal successfully. 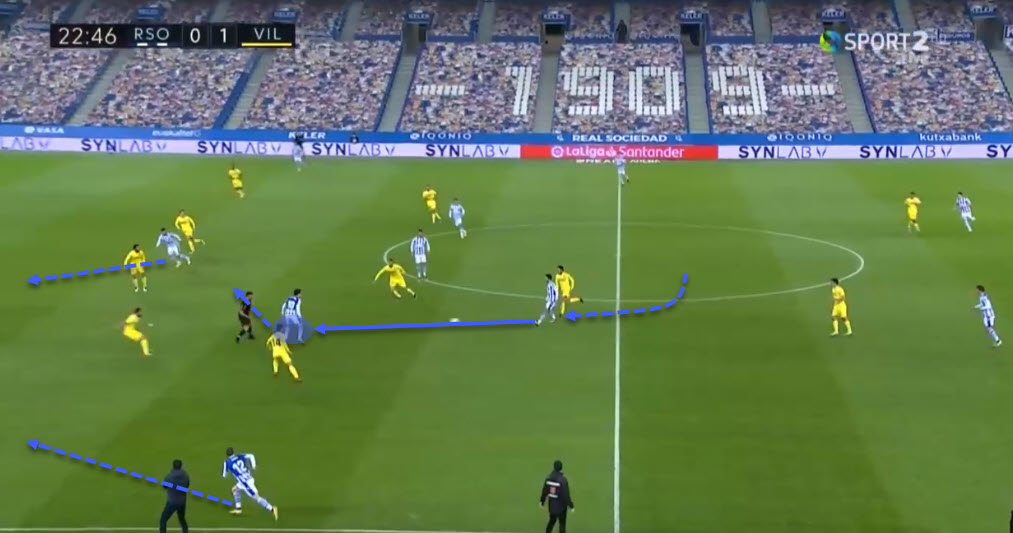 As soon as that happens, the runs of both Muñoz and José are activated since they know the 23-year-old can find them with a piercing through ball. These instances were crucial in their ball progression and finding space between the lines a key concept in Alguacil’s tactics.

Villarreal opted for a heavy man-marking approach in their defensive 4-4-2 scheme. Parejo would stick close to Guevara while Bacca and Moreno pressed the centre-backs. This would turn their shape into a 4-3-1-2 as they advanced up the pitch.

The idea behind Emery’s pressing tactics was to direct the ball wide where they could collapse with the aid of the edge of the pitch as their additional man. A similar situation can be seen below as Villarreal engage in a man-marking pressing sequence. 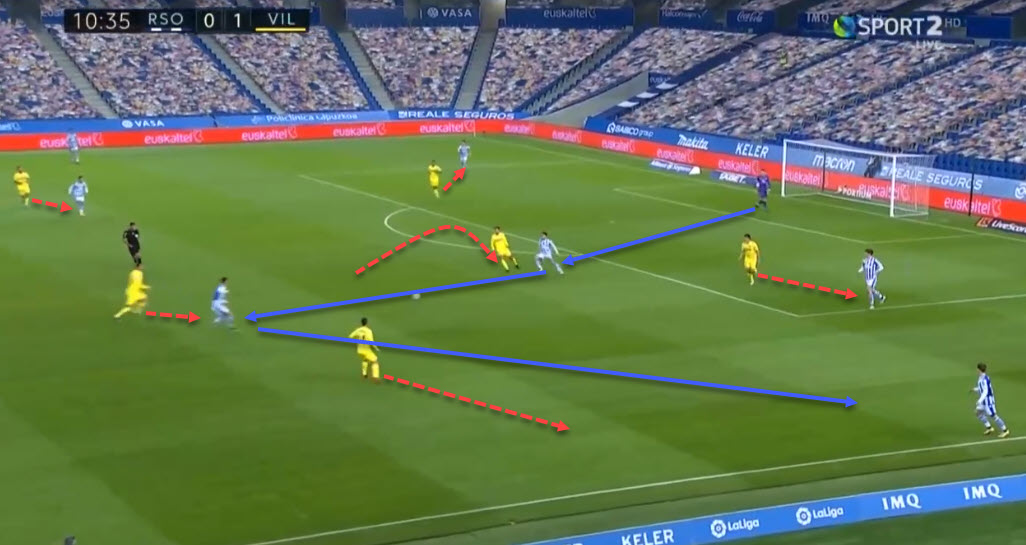 Parejo follows the pivot and makes an angled run from left to right to direct Real Sociedad’s passes to that side. Notice how the Yellow Submarine is guiding the opposition towards their left-back where they can successfully collapse and force a blind clearance that stops the attack.

They were certainly not afraid to pile men forward in an attempt to squeeze them out of possession, but that came with a certain cost as well. Real Sociedad are a side that has clear mechanisms to escape the press, and while they were shaky at times in doing so, it was still mostly successful.

Below is another graphical representation of Villarreal’s pressing structure and one of the many ways La Real looked to bypass it. 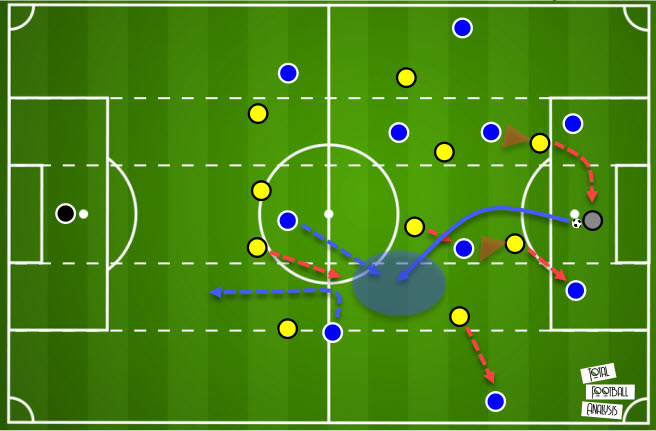 Again we can see a similar 4-3-1-2 system forming but this time, Moreno and Bacca are keeping both Merino and Guevara in their cover-shadow, and the latter is making a curved run at the goalkeeper to force a clearance. Ideally, the defenders would want La Real to go short to the centre-backs and towards the full-back so that they can collapse as they did in the previous example.

However, this time around, Remiro goes long and finds José, who has dropped deeper to receive. He then lays the ball off to one of the midfielders, and that instantly triggers Oyarzabal’s run in-behind the defensive line.

And it was in that space between the midfield and the forward line that Real Sociedad would find the most success. Once Villarreal committed men forward, pockets could be found for La Real’s attacking players to occupy. 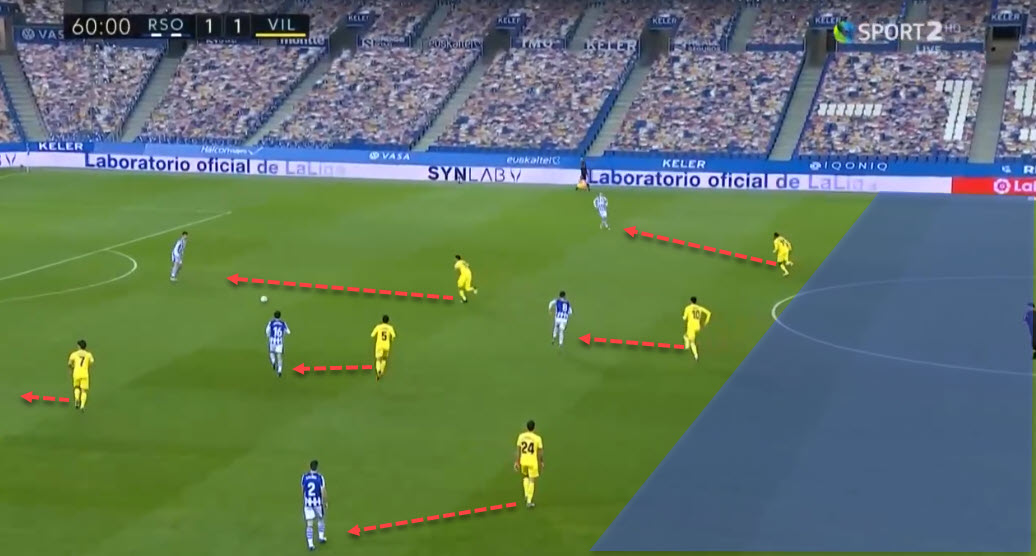 Above, you can see the space that has appeared behind Villarreal’s backs and when and if Real Sociedad escaped their pressing structure, they were left with acres of the pitch to use in quick transitions.

For instance, the example above translates into the sequence below as López receives the ball between the lines and can turn with it and switch sides for Real Sociedad to progress the attack. 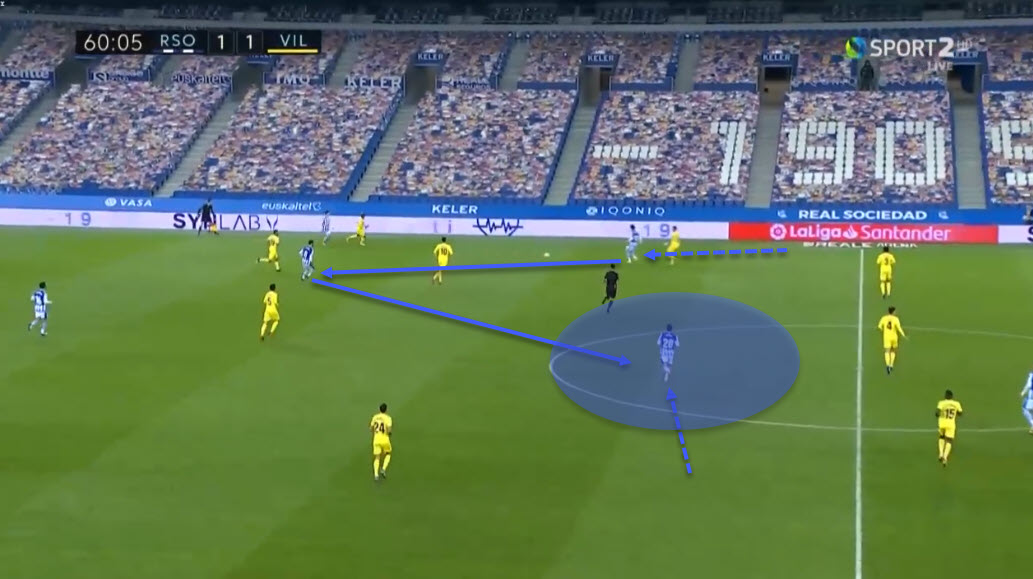 The most interesting thing about this match was the similar approach both teams applied. Villarreal and Real Sociedad are fairly positional teams that build-up from the back and tend to dismantle their opposition systematically.

This tactical analysis will now turn to the visitors’ attacking tactics against the home side’s 4-4-2 block and high pressing. You can see the general setup with Villarreal in possession down below. 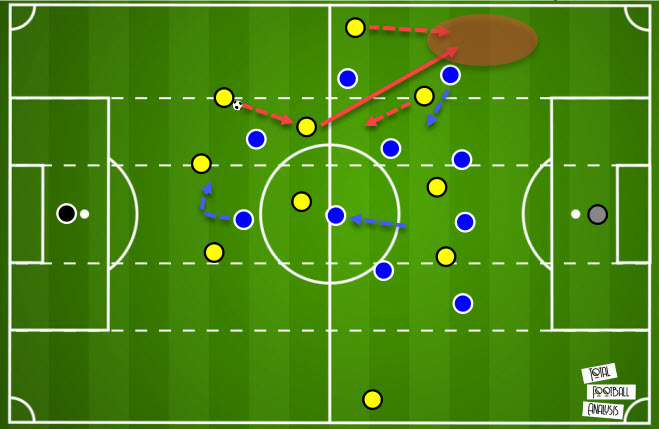 The two centre-backs would drift apart and let Iborra position himself between them or just ahead of them. Parejo would usually be close as well, and he’d try to open a passing channel so that the ball can be progressed cleanly. In the instance above, Villarreal have a 3v2 situation in the first line and have gained access to Parejo in the second line.

As soon as that happens, two different triggers are activated – first Pedraza cuts inside, taking the opposition full-back with him, and then Estupiñán charges into the space in a 1v1 duel against Barrenetxea.

Villarreal were trying to create those isolated scenarios out wide and then deploy passes into the danger areas. Real Sociedad pressed in a similarly man-marking heavy approach as their visitors did and also equally successful. One of the midfielders would usually occupy the pivot while two other forwards pressed the centre-backs in a quasi 4-3-3 structure. 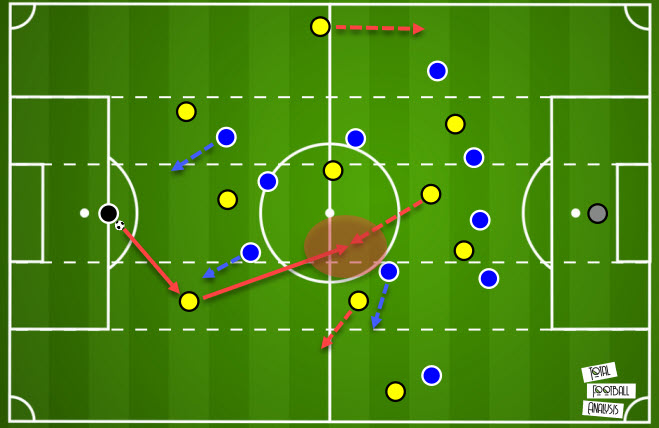 As you can see above, Villarreal would counter this by dropping their forwards deeper when necessary. In this instance, it’s Moreno who drifts into the pocket between the lines to receive the pass from the centre-back. But the ball needed to be recycled from one side to the other with enough speed so that Real Sociedad’s block doesn’t have the time to reposition.

That sort of movement by the forwards also put the defensive line in a tricky situation – they had to choose between letting their markers receive unmarked or following them and risking leaving acres of undefended space behind their backs.

One thing Villarreal were extremely good at was inviting the pressure and then bypassing it while Real Sociedad’s block was still unsettled. Notice such a scenario below as La Real are trying to put immediate pressure on their opponents who have triggered their press by passing backwards. 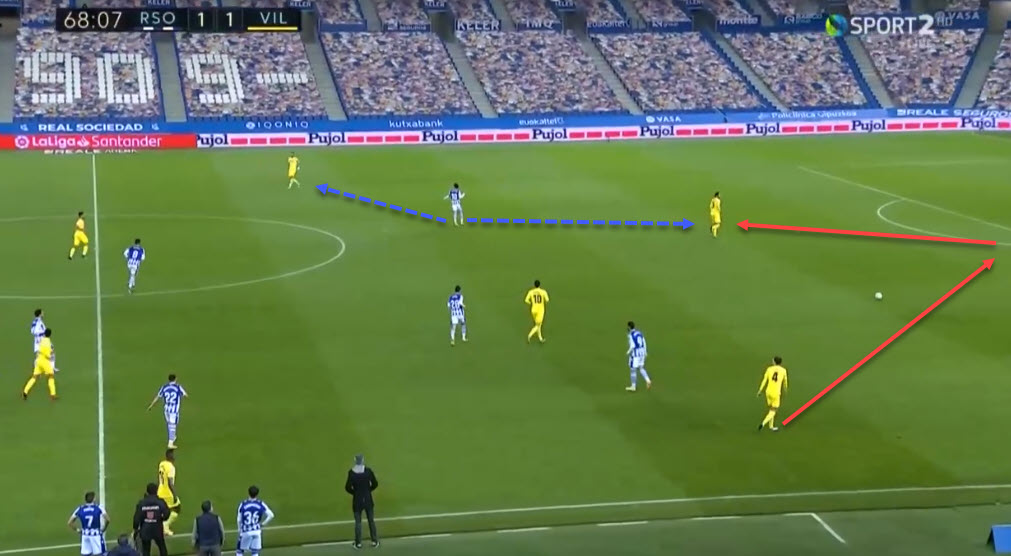 However, notice how Villarreal have achieved an overload on the right-hand side by swapping side extremely quickly, as we’ve mentioned, they aimed to do earlier in this tactical analysis. This results in Oyarzabal having to mark two players at the same time, and his hand gesture perfectly depicts how he feels about it.

The away side would use these moments to achieve a numerical superiority at the very start of their attacks and would then have a much cleaner entrance into the other two-thirds of the pitch.

One other way to quickly access the danger zones, especially in the second half with the introduction of Chukwueze, was to once again invite the pressure and then bypass it with a long ball over the top. 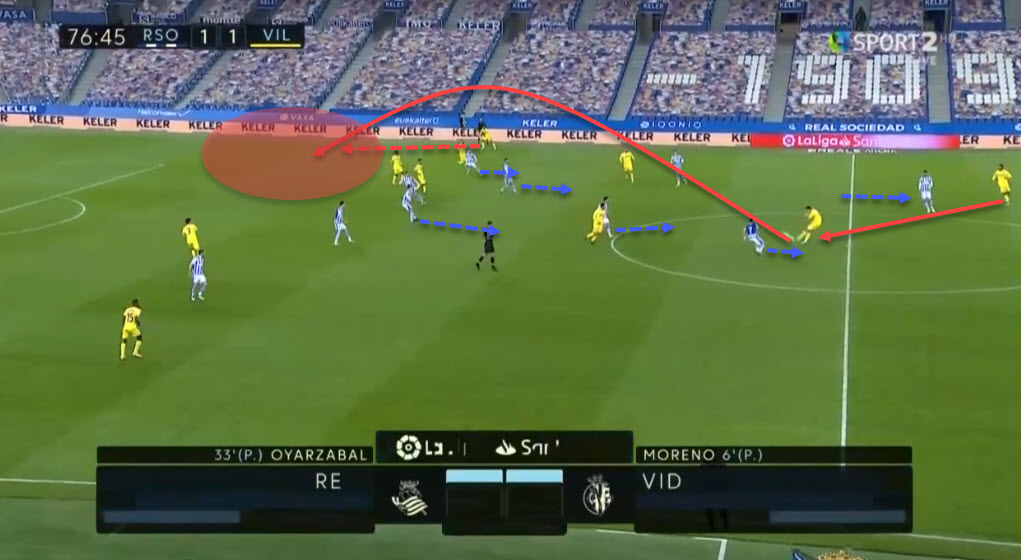 In the example above, the sequence starts around Real Sociedad’s corner flag, but Villarreal deliberately go back to draw the opposition’s structure out and then, while most of the defenders’ momentum is taking them one way, they quickly hit a long pass in-behind the defensive line in the opposite direction.

This direct approach is something we don’t necessarily always connect with Emery’s tactics, but in situations like these, it was still a viable option.

At the end of the day, despite Real Sociedad being the better team overall, a draw felt like a fair result. The clash of two extremely exciting teams definitely delivered and even though we didn’t get a clear winner, it was an exhilarating contest.

Long may this level of competition continue in La Liga.