RB Leipzig’s season has been one that has caught many by surprise. While people expected them to find success under the leadership of their new manager, Julian Nagelsmann, most did not expect it to happen as quickly as it did. With 25 matches being played, RB Leipzig find themselves in third place, just one point off of second-place Borussia Dortmund and five points off of Bayern Munich. While Nagelmann’s tactics and individuals like Timo Werner, Marcel Sabitzer, and Dayot Upamecano attract a lot of attention, one individual who hasn’t received a lot is Lukas Klostermann, who has logged the fourth-most minutes in the squad behind the likes of Timo Werner, Péter Gulácsi, and Marcel Sabitzer.

Klostermann has been at RB Leipzig since 2014, when they purchased him from VfL Bochum. His first two seasons saw him grow from a u-19 player to a first-team regular at right-back. The 16/17 season was one of frustration, with Klostermann dealing with a variety of injuries that led him to only making one appearance for the club. The previous two seasons, Klostermann made 26 appearances in the Bundesliga, with additional appearances coming in the Champions League and the Europa League as well. While the analysis shows his growth throughout his career, Klostermann has become a defensive mainstay under Nagelsmann this season, appearing in 23 Bundesliga matches already, with eight UEFA Champions League appearances as well. This scout report looks to provide some tactical analysis as to how Lukas Klostermann has become a key figure in RB Leipzig’s success this season.

Leipzig have played a variety of formations this season, with different setups being used depending on the opponent, with Nagelsmann opting to use formations a 3-4-3, 3-5-2, 3-1-4-2, or a 4-4-2. The 3-1-4-2 and the 4-4-2 have been a particularly popular selection for Nagelsmann. Klostermann’s role in these structures was quite different when comparing the beginning of the season to the time prior to the Bundesliga’s suspension due to the Coronavirus.

Initially, as shown above, Klostermann was being used more consistently on the right side of the pitch, either as a right-back or a right wing-back.The matches against Bayern Munich and Borussia Mönchengladbach were highlighted because of the level of competition Leipzig faced, with both of them being in the top four of the Bundesliga, while the other matches are some of his most recent appearances for Leipzig.

Despite being listed as a right-back, Klostermann’s success rates in regards to his overall actions suggest that he is a better fit in the centre of the pitch, as his most successful match was against Union Berlin, when he lined up as a centre-back. Even when he is one part of a back three, his actions are generally much more successful than those as a wing-back or right-back. His passing accuracy skyrockets when he is moved to playing as a centre-back, despite having to distribute the ball more frequently. Both his losses and recoveries of possession also seem to support the idea that his move to a more central position seems to yield better performances from him. While the data suggests this move is beneficial, a caveat to consider is that this is incredibly dependent upon his role within the context of the other 10 players in the squad.

Klostermann as right-back and wing-back

Initially, Nagelsmann had Klostermann playing down the right side, primarily as a right-back, but also as a right wing-back. One of the ways in which he struggled with these positions was due to his responsibility to close down attackers, especially when they were building out of the back. Because Klostermann isn’t as fast as most outside backs, he struggles to effectively close down opponents. 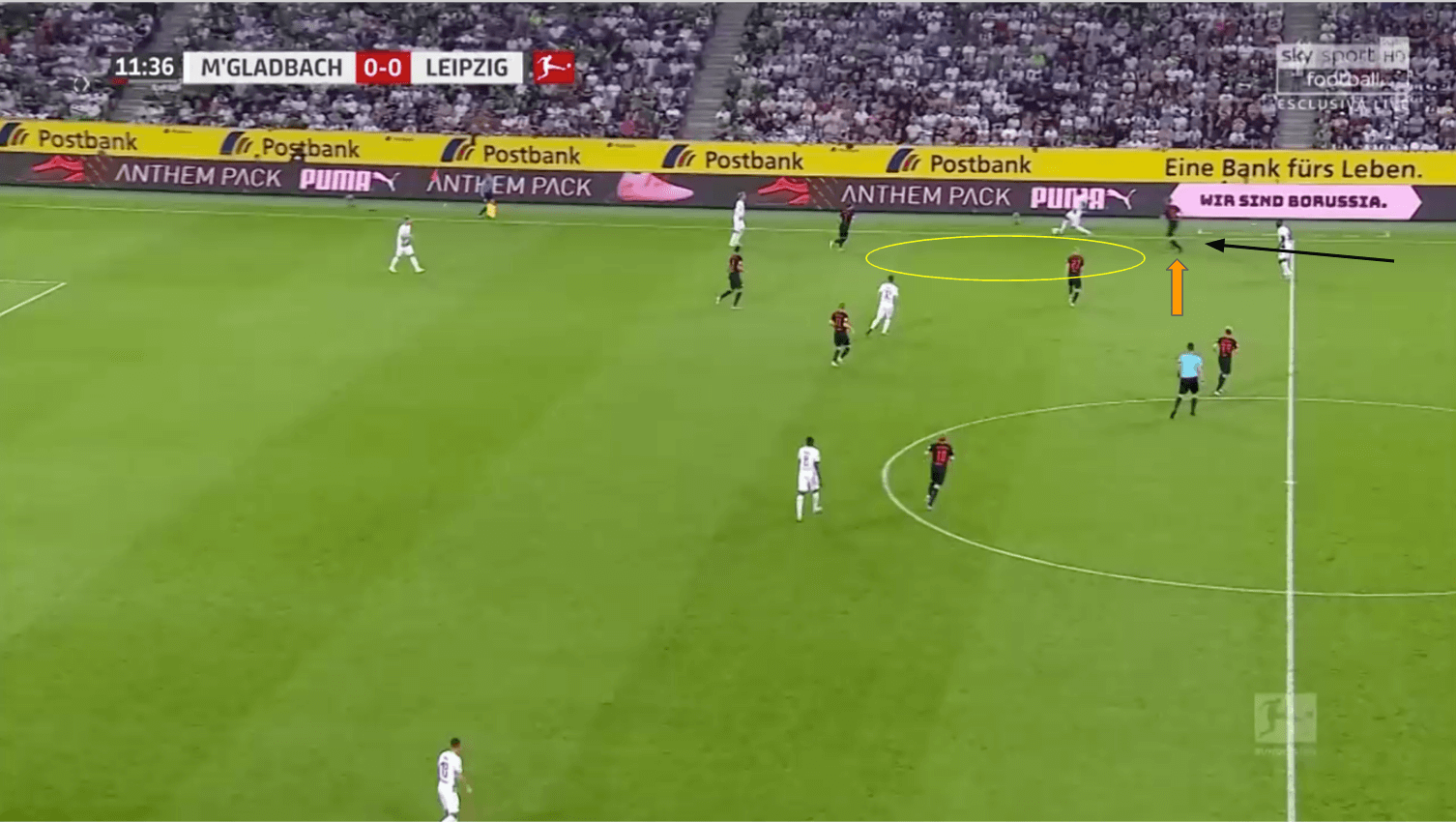 Against Borussia Mönchengladbach in August, Klostermann was closing down Marcus Thuram, who had checked back to receive a pass. As Thuram checked back, Klostermann did not keep pace with him, thus allowing Thuram to not only receive the ball but also to turn into the space. After Thuram turned, he played a vertical pass forward to a teammate, effectively beating Klostermann and one of his Leipzig teammates. There were multiple times that Gladbach looked to play down the left flank, with Thurman taking full advantage of his speed over Klostermann.

Closing down on the press was really the one key defensive struggle that Klostermann had as an outside defender. His spacing and positioning was usually correct, with him adjusting for his lack of speed as an outside defender by staying slightly closer to the attacker. While this could have opened up gaps in Leipzig’s defence, Klostermann was able to close those down and not allow himself to be exploited. That being said, his ability to participate in successful attacking opportunities was also highlighted 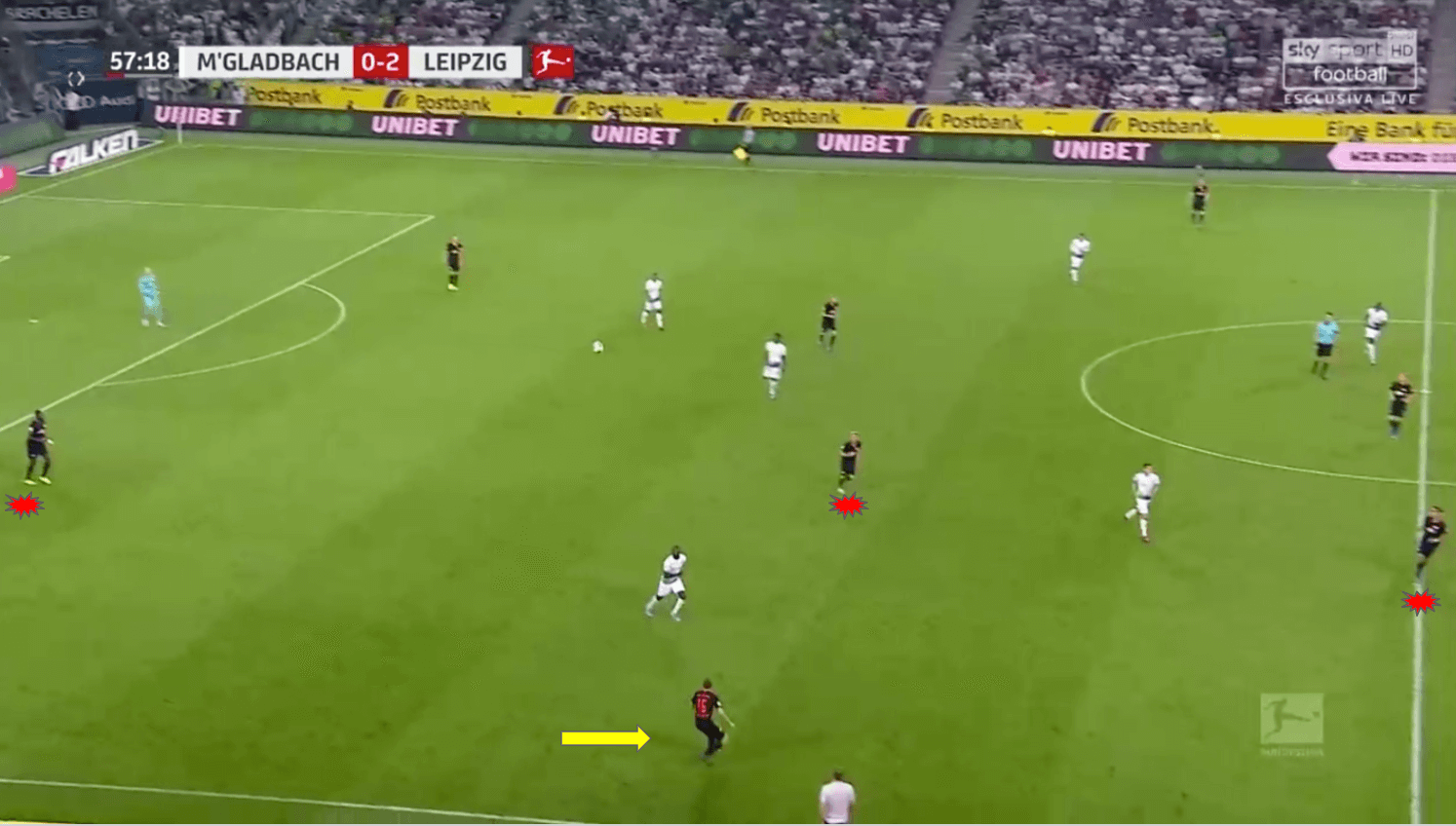 In this instance, against Gladbach, Klostermann received a long pass from his goalkeeper, Péter Gulácsi. As the ball was in the air, Klostermann had three options available to him to play the ball, all highlighted above. Instead, he opted to head the ball forward, which resulted in Leipzig losing possession. The problem with this is not just that he had a lot of time to receive the ball, but that he also had more efficient options to retain possession. Instead of using those options, it almost seemed like Klostermann panicked, which resulted in Gladbach regaining possession of the ball. While Klostermann certainly did not play his best matches as a wing-back or right-back, he certainly fulfilled the role that Nagelsmann required, as he continued to be selected for that position. His real success, however, came from his play as a centre back.

Play as centre-back in pair

While it doesn’t happen often, RB Leipzig sometimes opt to play with four defenders. When they do, Klostermann has established himself as an option for centre-back, especially with Ibrahima Konaté out injured. When in this role, Klostermann does well to manage the game both when in possession and out of possession. He most recently served this role against Union Berlin, where he partnered with Dayot Upamecano in the centre of the defence. One of the benefits of any player who partners with Upamecano is that he attracts a lot of attention with his ability to distribute the ball. Klostermann took advantage of this by attacking and engaging defenders. 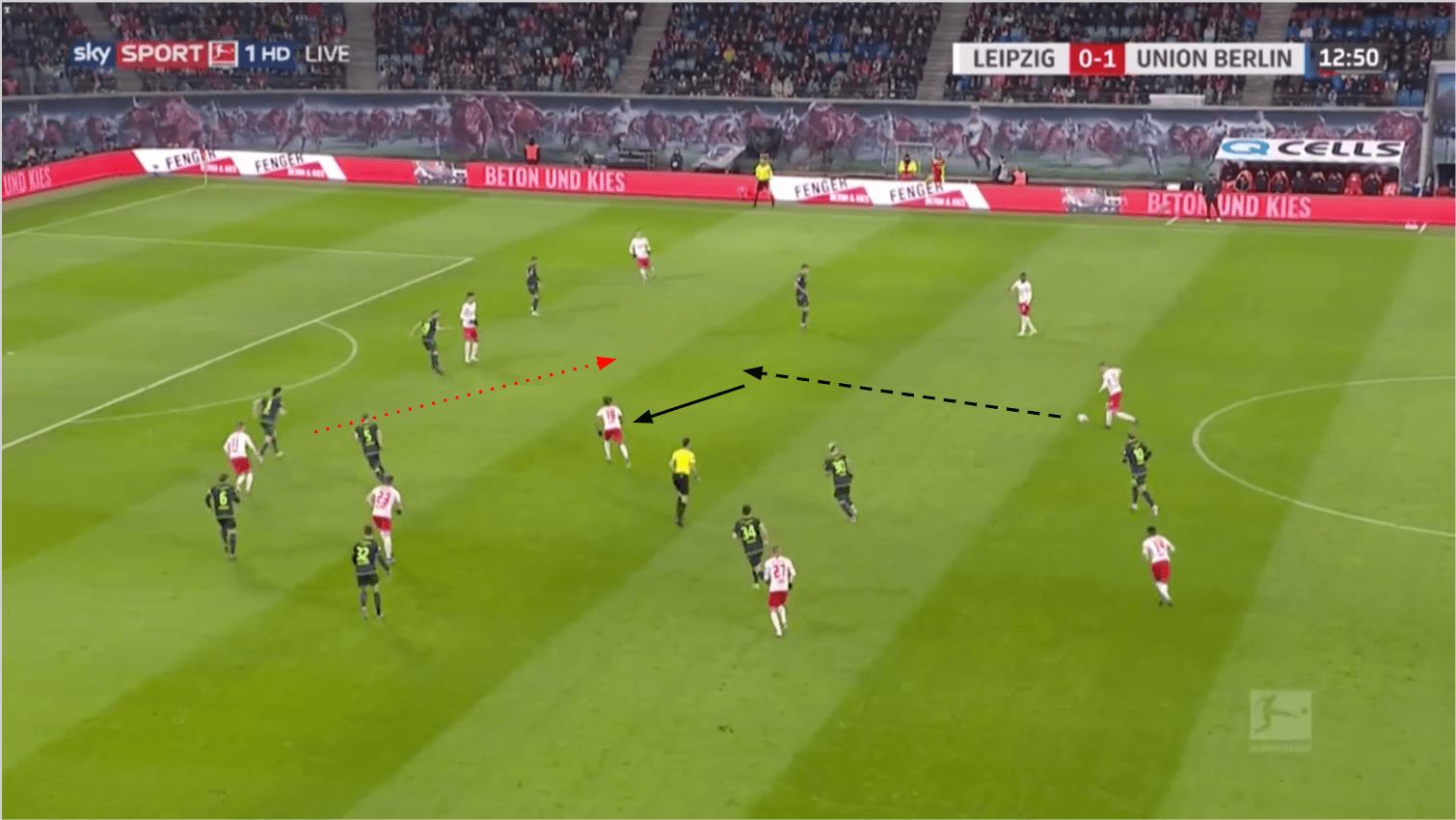 One example of this occurring is above. Klostermann received the ball from the left side of the pitch. As the ball arrived, he checked his space and realised that there was a good amount to run into in front of him. Instead of panicking and trying to get rid of it, as many central defenders would have done, Klostermann drove up the pitch, attracting Union’s holding midfielder, eliminating potential defenders and creating space for his teammates. As the midfielder stepped up, Klostermann laid the ball off to Christopher Nkunku, Leipzig’s leader in assists. Because Klostermann attacked the area, Nkunku was now unmarked, and if he had received the ball a bit better, he would have been alone in front of Union’s penalty box.

Klostermann also displayed his ability to distribute the ball during the match against Union Berlin. He and Upamecano were in a 2v1 situation vs Union’s striker for most of the match, so they used their spacing to be able to take advantage of the numerical overload. 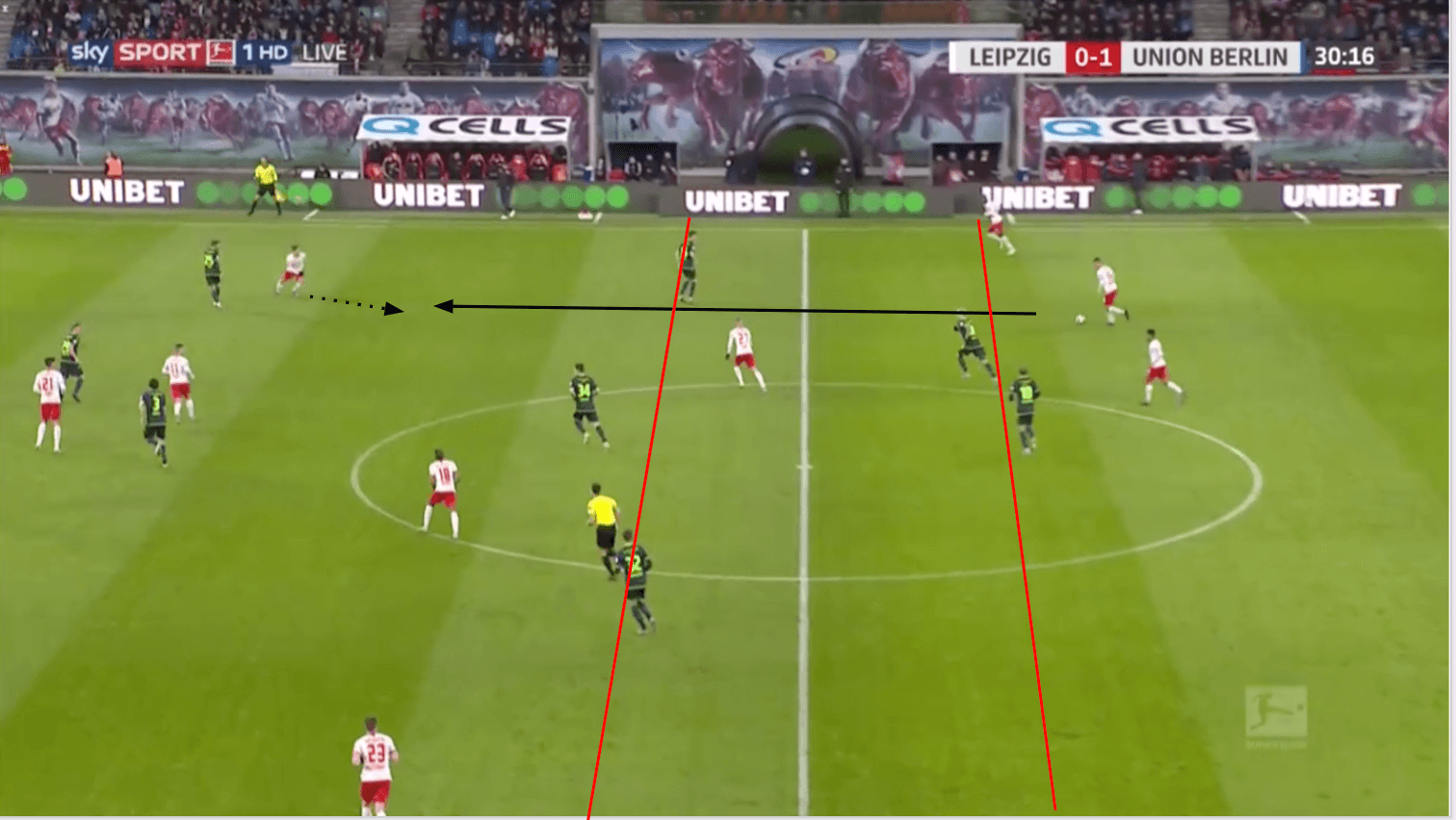 Here, Klostermann was able to take advantage of Tyler Adams’ movement. Adams dropped to receive a pass and attracted the attention of a Union Berlin midfielder. As that midfielder stepped up, it created space to be exploited. Adams laid the ball off to Klostermann, who settled it with his first touch, then played a pass that eliminated two (red) lines of defensive pressure. These vertical passes are incredibly dangerous because when they are executed properly, they catch defenders off guard and often have attackers running directly at them, which is a defender’s nightmare. 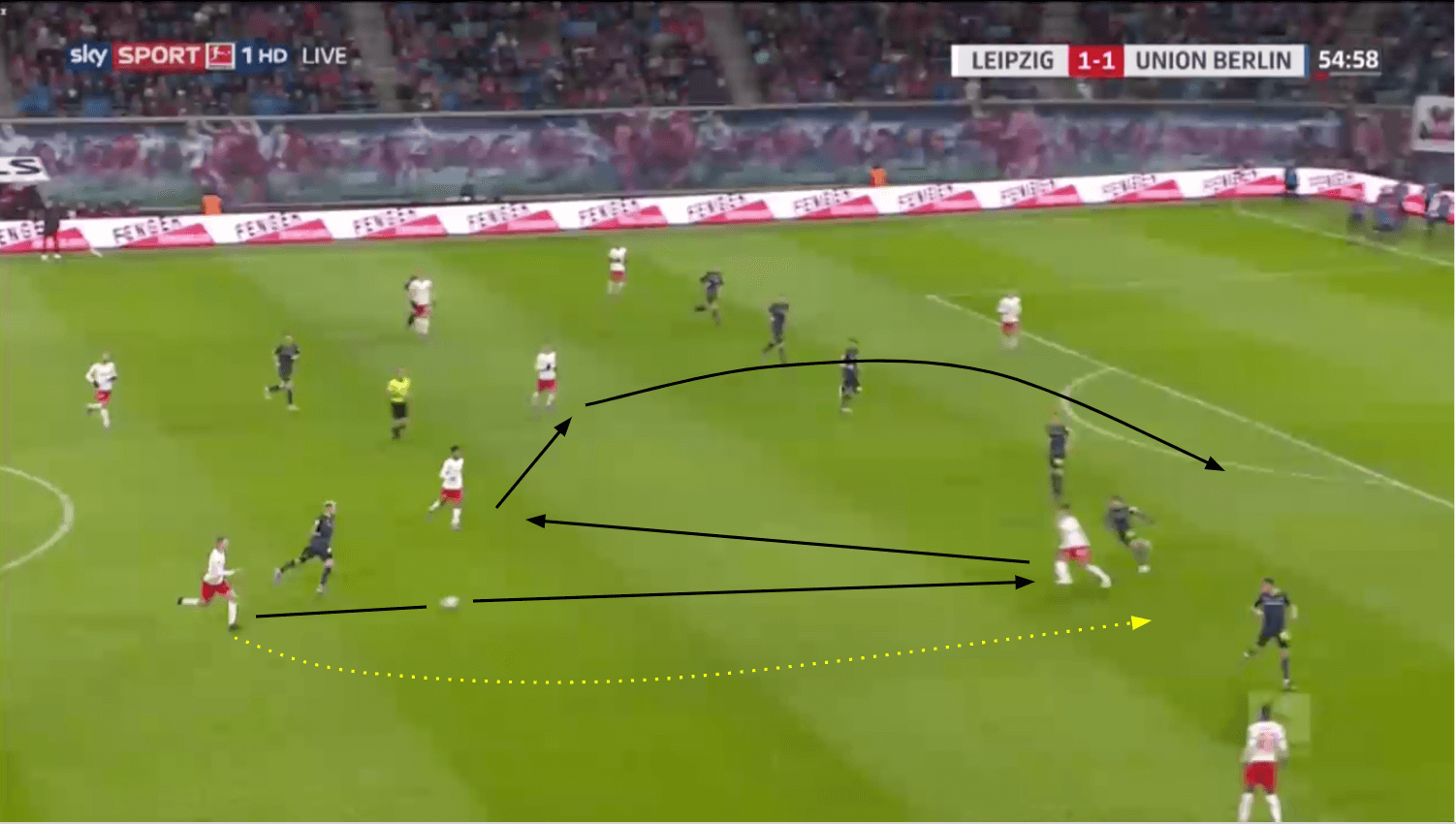 Klostermann also demonstrated his ability to get involved in the attack when Union Berlin sat back and defender, in this instance, with six men in their defensive line. The German played another vertical pass and then began to overlap Patrik Schick, who laid the ball off to Tyler Adams. Klostermann continued his run as Adams laid it off to Sabitzer, who attempted to find Klostermann but was unable to. While the overlapping centre-back is a relatively new trend, Klostermann looked comfortable attempting to create a numerical advantage for his team when attacking. If Leipzig and Klostermann continue to play in back four that contains Upamecano or Konaté, he will continue to have these attacking opportunities available to him.

Play as centre-back on right side of  a back 3

While Klostermann has demonstrated his ability to function quite well in a back four, Leipzig have recently opted to play with a back three most consistently. Most recently, Klostermann has been lining up on the right side of the back three, with Upamencano in the centre and Marcel Halstenberg on the left side. Defensively, this appears to be where Klostermann is most comfortable, as he often finds himself providing cover to a wing-back as opposed to having to close someone down, which was previously determined to be a struggle for him. Similarly, when playing as part of the back three, Klostermann can use his ability to position himself to eliminate opponents’ speed. 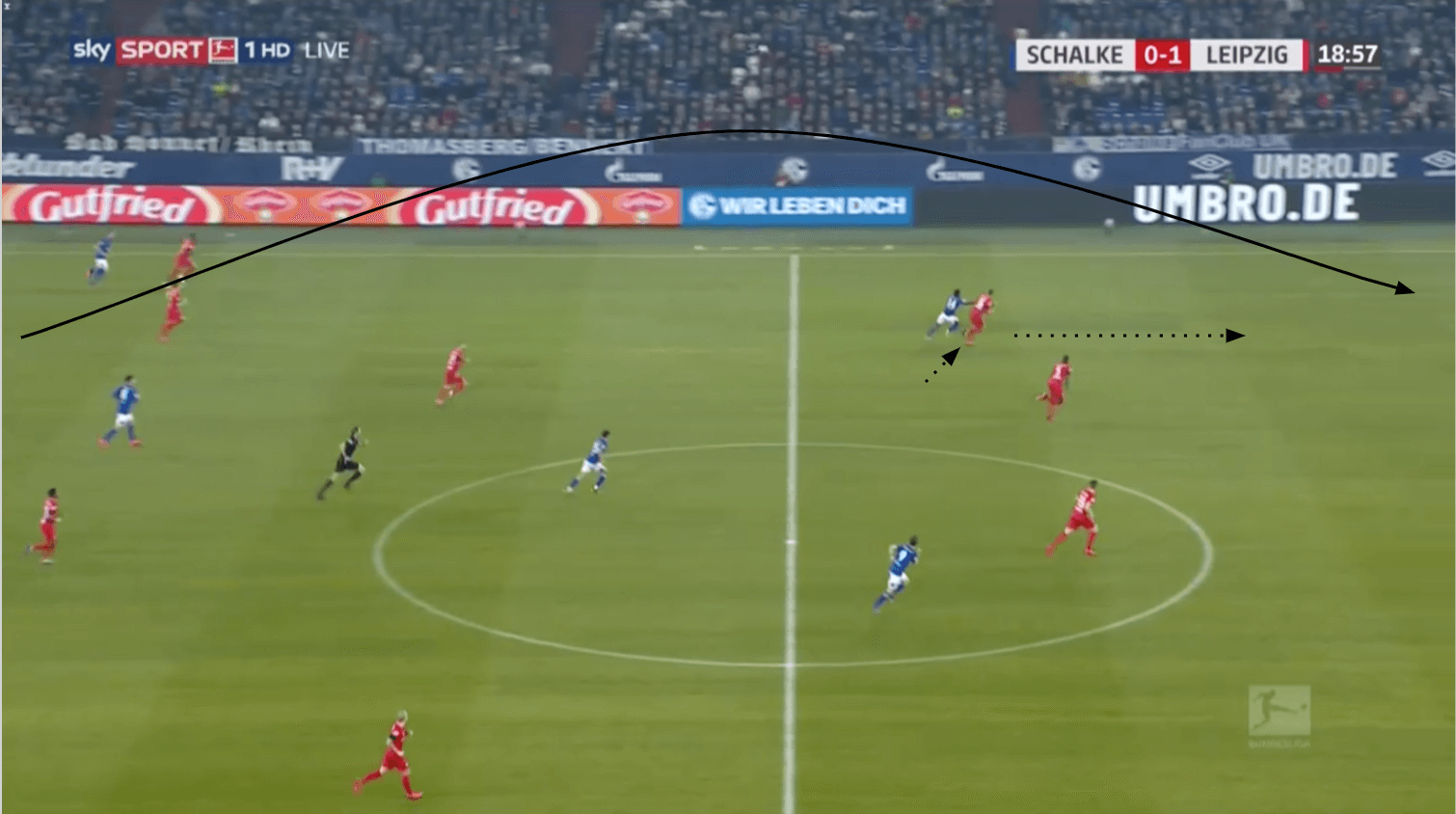 One of the many examples of this comes from Leipzig’s match against Schalke 04. As the ball was played from Schalke’s backline, Klostermann’s first two steps were into the path of the attacker. This makes it incredibly difficult for the attacker to beat him, as he now would need to take steps towards the outside to get around Klostermann. The attacker had no option but to try to run around him, and Klostermann was able to find possession of the ball and play it back to Gulácsi, who was able to redistribute it to an open teammate. Klostermann demonstrates this ability to position himself properly to eliminate any passes over the top as potential threats on a consistent basis. This effectively eliminates the opponent’s opportunities to counter-attack RB Leipzig down the left side of the pitch.

His defensive positioning also allows him to react to multiple offensive opportunities, as he is able to read the game incredibly well. 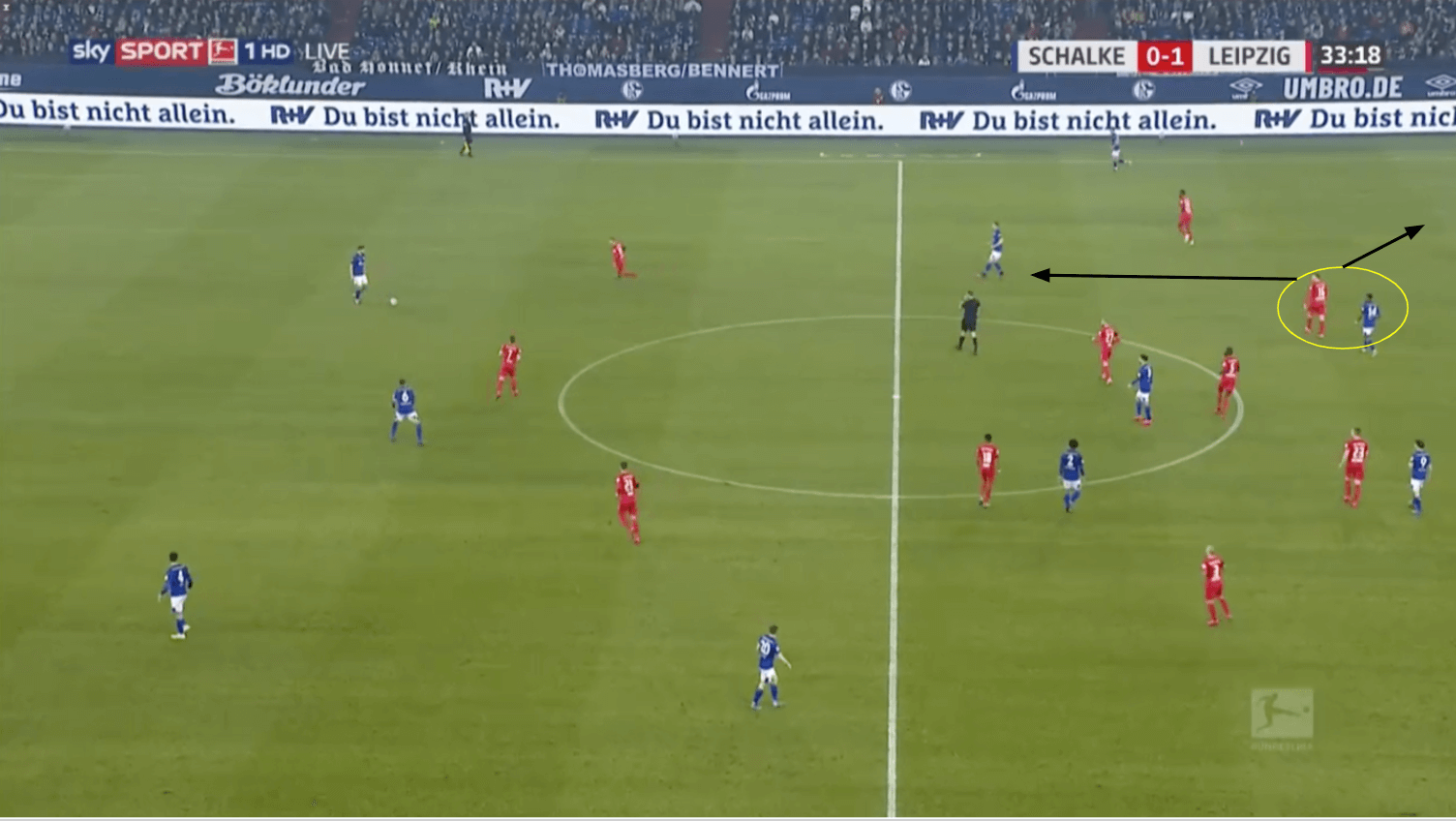 Here, Klostermann had created three different defensive reactions, depending upon where the ball was played. First and foremost, he was marking Schalke’s forward. Klostermann stepped up just before this image, so he actually doesn’t need to worry about this forward, as he was in an offside position. Depending on what the man in possession decided, Klostermann could either provide cover for his teammate on the outside if the ball is played there, or he could step into the space in front of him if Schalke opted to try to play through the middle. In this instance, the ball was played through the middle, and Klostermann stepped up in the perfect time, dispossessing Bastian Oczipka of the ball.

Lukas Klostermann has been an absolute workhorse for Julian Nagelsmann’s RB Leipzig. His transition from right-back and right wing-back to a more central role has mirrored RB Leipzig’s success in the Bundesliga this season. It’s no surprise that he is one of the most-selected athletes in Leipzig’s squad. His ability to position himself properly to best defenders, combined with his ability to find open teammates up the pitch make him an ideal defender, particularly when playing in a back three. While Leipzig have a total of ten defenders on their roster, Klostermann’s consistency has made him a core part of Julian Nagelsmann’s plans for the 2019/20 Bundesliga season.