Junior Flemmings is a core part of Phoenix Rising’s electric, free-flowing attack in the USL. Last year, with Flemmings and Solomon Asanté on the left and right-wing, Rising led the league with 90 goals on their way to easily winning the Western Conference by a total of 18 points. Flemmings’ contributions to the team’s success both last season and this season will be outlined in this scout report.

This tactical analysis will examine how Flemmings fits into manager Rick Schantz’s tactics at Phoenix Rising. The analysis will focus on how he contributes to Rising’s press as well as their fluid attack.

Flemmings was a key contributor to Phoenix’s high-scoring attack last season and continues to do so this year. In 28 games last season, Flemmings scored 15 goals and registered a total of nine assists. Flemmings would have contributed more to Rising, but he was away on international duty for six matches. This still put him in the top 10 for goals and top 20 for assists in the entire league. This output was just three goals and one assist short of his offensive output for the rest of his USL career: a total of 83 matches for NY Red Bulls II and Tampa Bay Rowdies. While this season has just recently restarted after Rising played one match in March, Flemmings has already scored three goals and provided two assists in the process, as well as winning a penalty against Orange County which helped secure a 1-1 draw.

Flemmings’ role in the press

One of the more important parts of Rising’s game is their ability to press opponents. They use their front three effectively to force opponents to either play the ball long up the pitch or to have them try and loft passes into players. The lofted pass is ideal because Rising’s wingers, Solomon Asanté and Junior Flemmings, are so quick that they can often pressure the ball as it’s arriving. This gives Phoenix the opportunity to win the ball higher up the pitch, allowing them to exploit transitions more, as they did against LA Galaxy II. 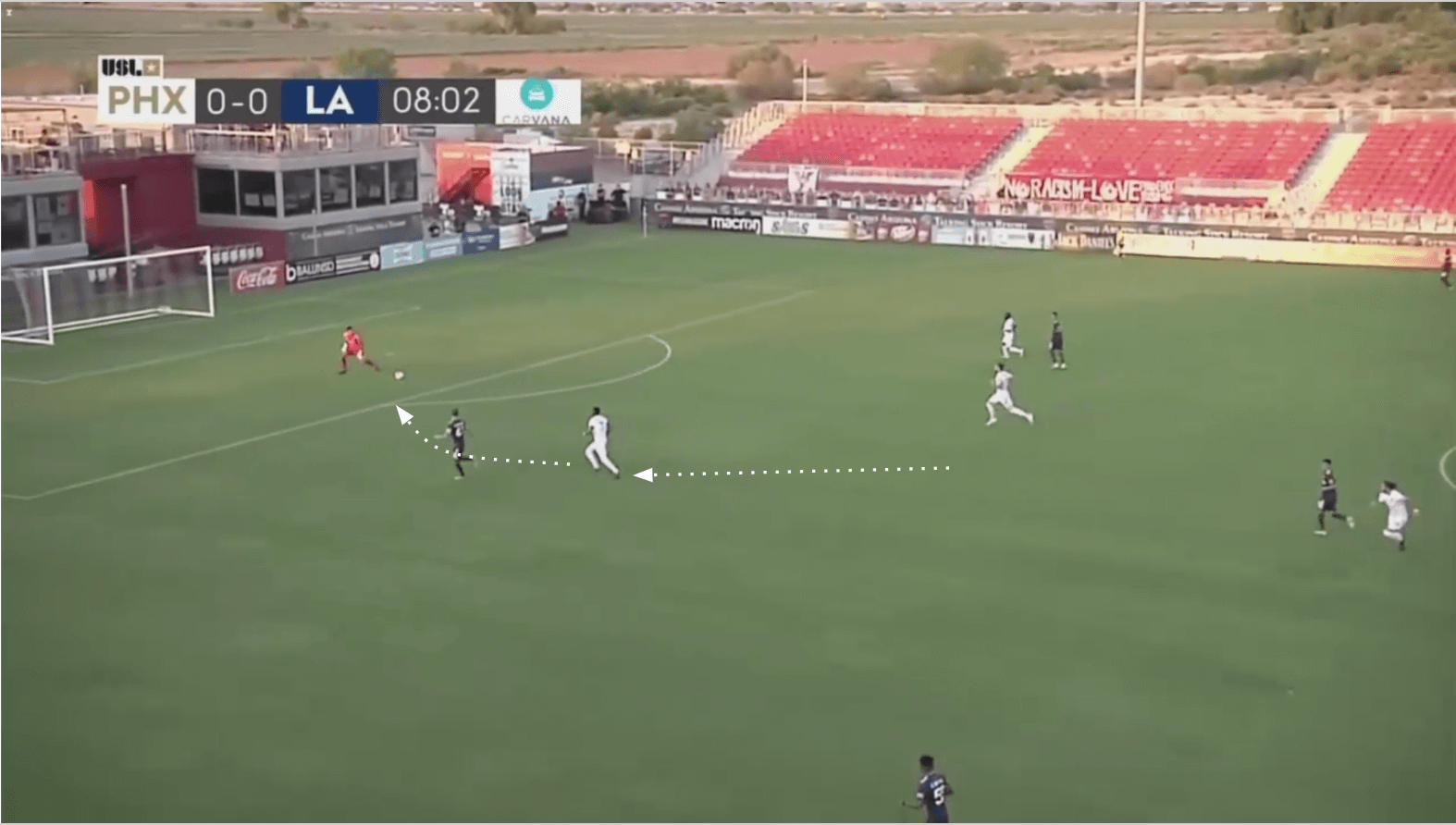 Flemmings’ role in the press is two-fold. The first thing he is responsible for is cutting off the pass to the right centre-back. When he and Asanté do this, it makes it incredibly challenging for opponents to progress the ball. This move occurs in conjunction with Rufat Dadashov using his cover shadow to prevent the opponent’s defensive midfielder from receiving the ball. If Flemmings executes his role effectively, he can then press the keeper, as he is doing above. The key here is that his pressure also utilises his cover shadow to still eliminate the centre-back, forcing the goalkeeper into one of the two aforementioned decisions that Phoenix likes opponents to make. 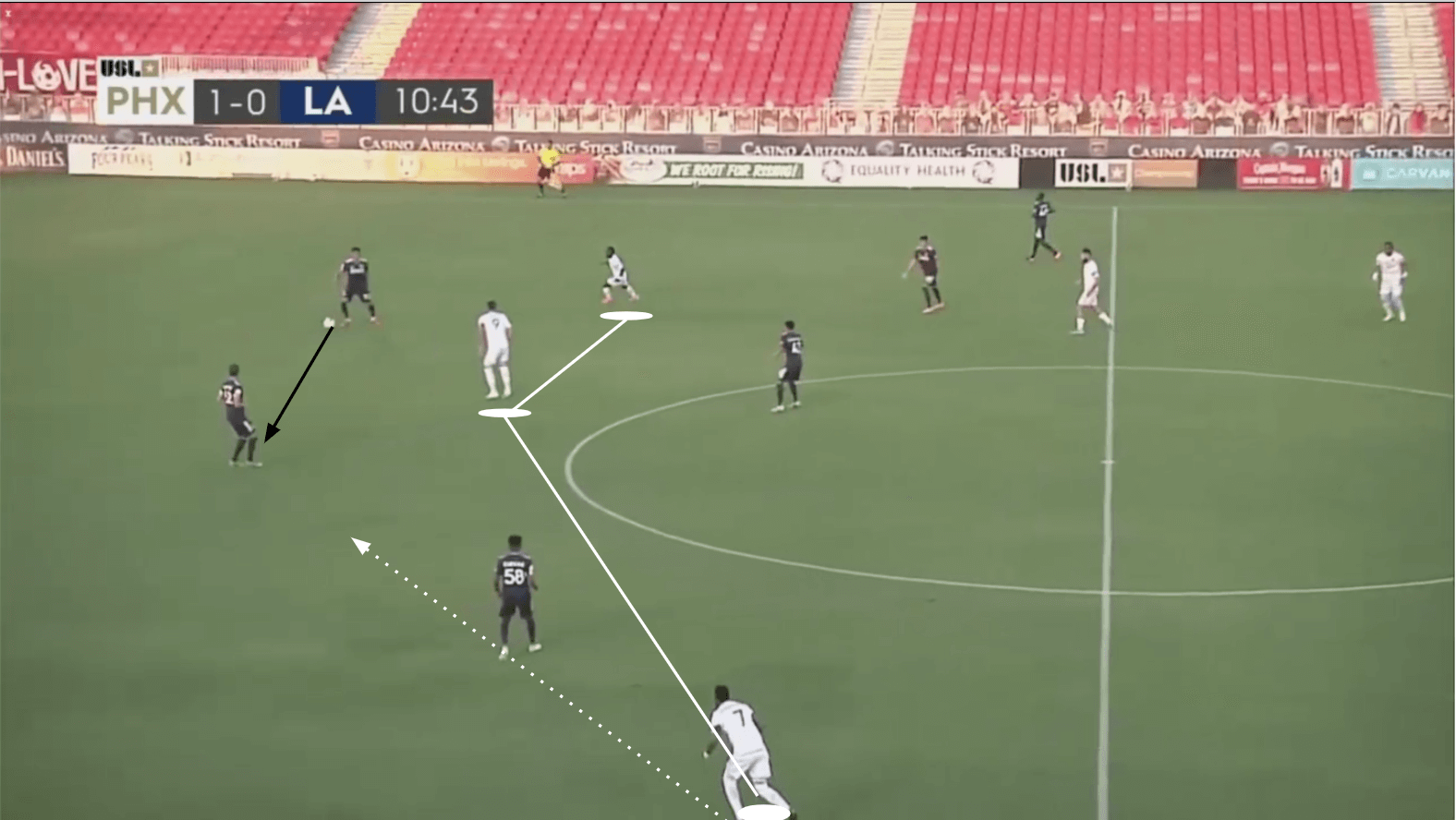 When Phoenix are in a mid-block, Flemmings’ role is a bit wider, but he still looks to dictate the play of the opponent. In the image above, LA Galaxy II’s centre-backs were in possession, looking to progress forward. As the ball shifted over to the right centre-back, Flemmings made a very similar run to the previous image. He used the shape of his run to eliminate LA’s right-back as a passing option while still putting pressure on the centre-back. Instead of sending the ball long as the goalkeeper did, the centre-back was forced to play the ball backwards, which was eventually lofted to the right-back, who was immediately put under pressure.

Ability to find space to receive

One of Flemmings’ strengths when going forward and helping his team in possession is his ability to find space in order to receive the ball. This is an incredibly important skill, especially when a player can be sure to position himself behind lines of defensive pressure. Depending on where Flemmings receives the ball, he can manipulate defenders and potentially create more space for himself and his teammates. 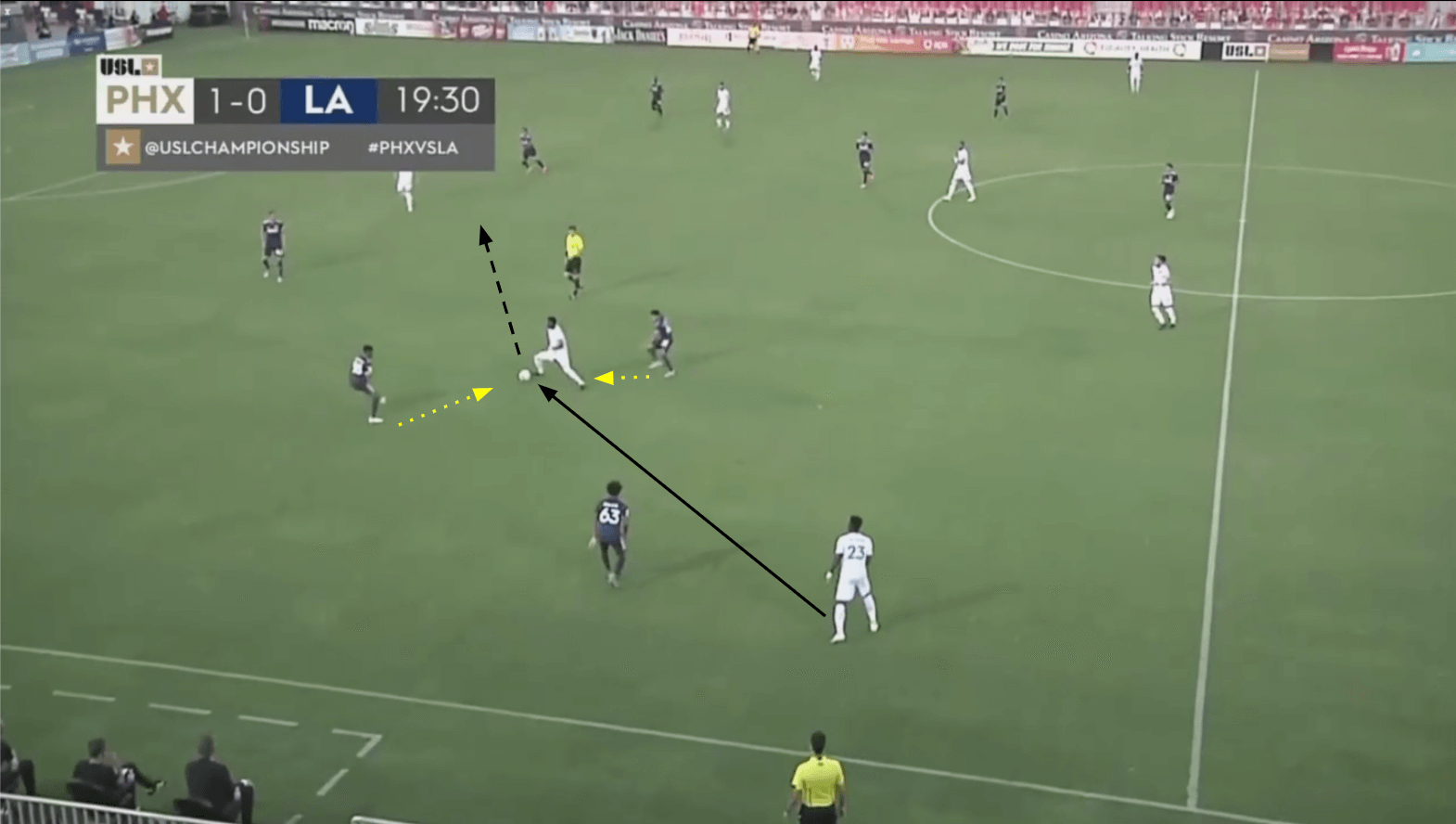 The first example of him doing this comes from Rising’s recent match against LA Galaxy II. Owusu-Ansah Kontor, the left-back, was in possession on the left side of the pitch. Flemmings started off close to his marker before making a run away from him, effectively positioning himself on the same line as the two LA defenders. As Kontor played the pass, Flemmings used the correct body shape to turn and receive the ball with his right foot, allowing him to face the goal. The two LA defenders went to collapse on him, but because he had turned properly, he was able to dribble into space. While he released the ball a little too early to execute an ‘up-back-through’ pass, Flemmings was still able to make this happen with his excellent spatial awareness. 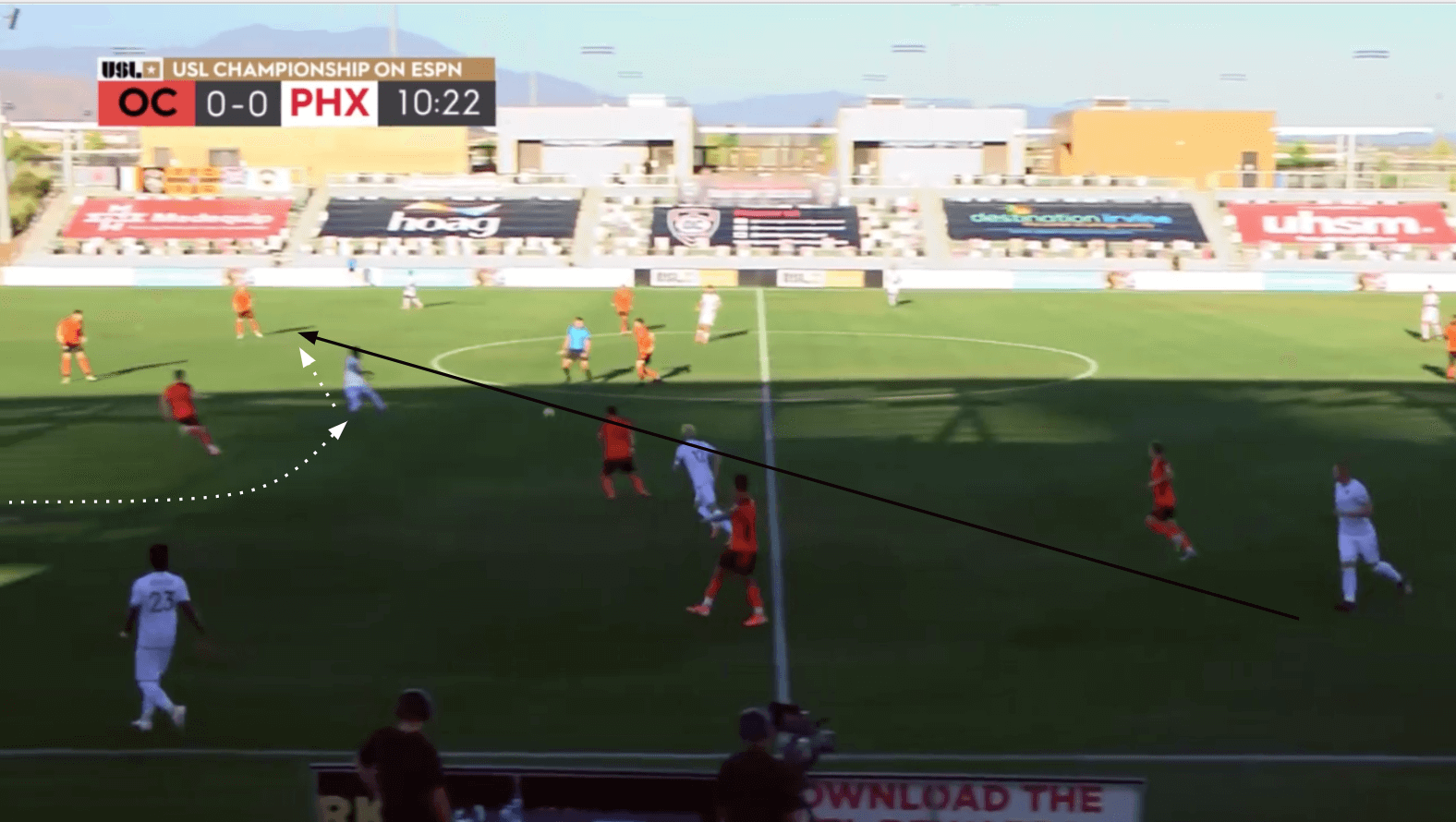 Another example comes from Rising’s match against Orange County SC. Flemmings was again playing on the left-wing, but this time he dropped down into the half-space, moving like he intended to receive the ball. However, he continued his run into the vast amount of space between the lines. A. J. Cochran played a wonderful pass into that space, and Flemmings was suddenly dribbling at full-speed towards the defence. He slotted a wonderful pass to Asanté inside the penalty area before finding himself in space in front of the goal, but the ball bobbled on the turf and Asanté was unable to control it. Flemmings’ instincts as a forward also allow him to find space in order for his teammates to find him. 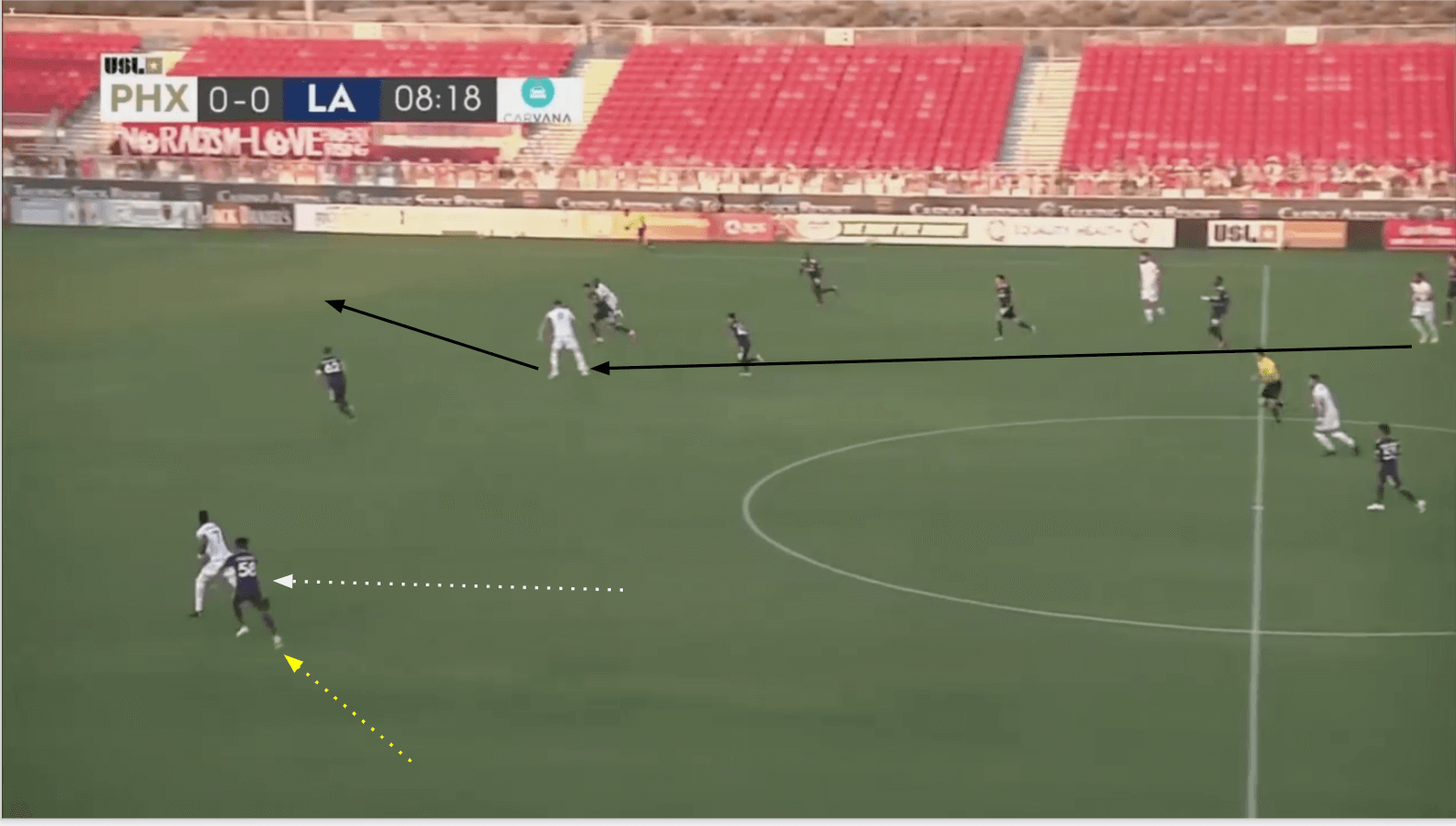 Above is an image taken just before Rising’s first goal against LA Galaxy II. As the play built up on the right side of the pitch, Flemmings, at the bottom of the image, took note of his defender and set himself up to score five seconds later. LA’s right-back is out of position — he’s too wide for where the ball was when LA was in possession, and especially too far wide with Phoenix quickly countering. As soon as Phoenix began their transition, Flemmings quickly got goal-side of his defender. This effectively eliminated the defender from the play; his only option was to crash into Flemmings and foul him. Asanté delivered a wonderful forward cross, and Flemmings buried the opportunity to put Phoenix up 1-0.

When Flemmings does get himself in these dangerous positions, his ability and willingness to dribble at defenders make him a threat to any opponent. Naturally right-footed, Flemmings is technically playing as an inverted winger — one that can cut in and deliver a shot or cross. 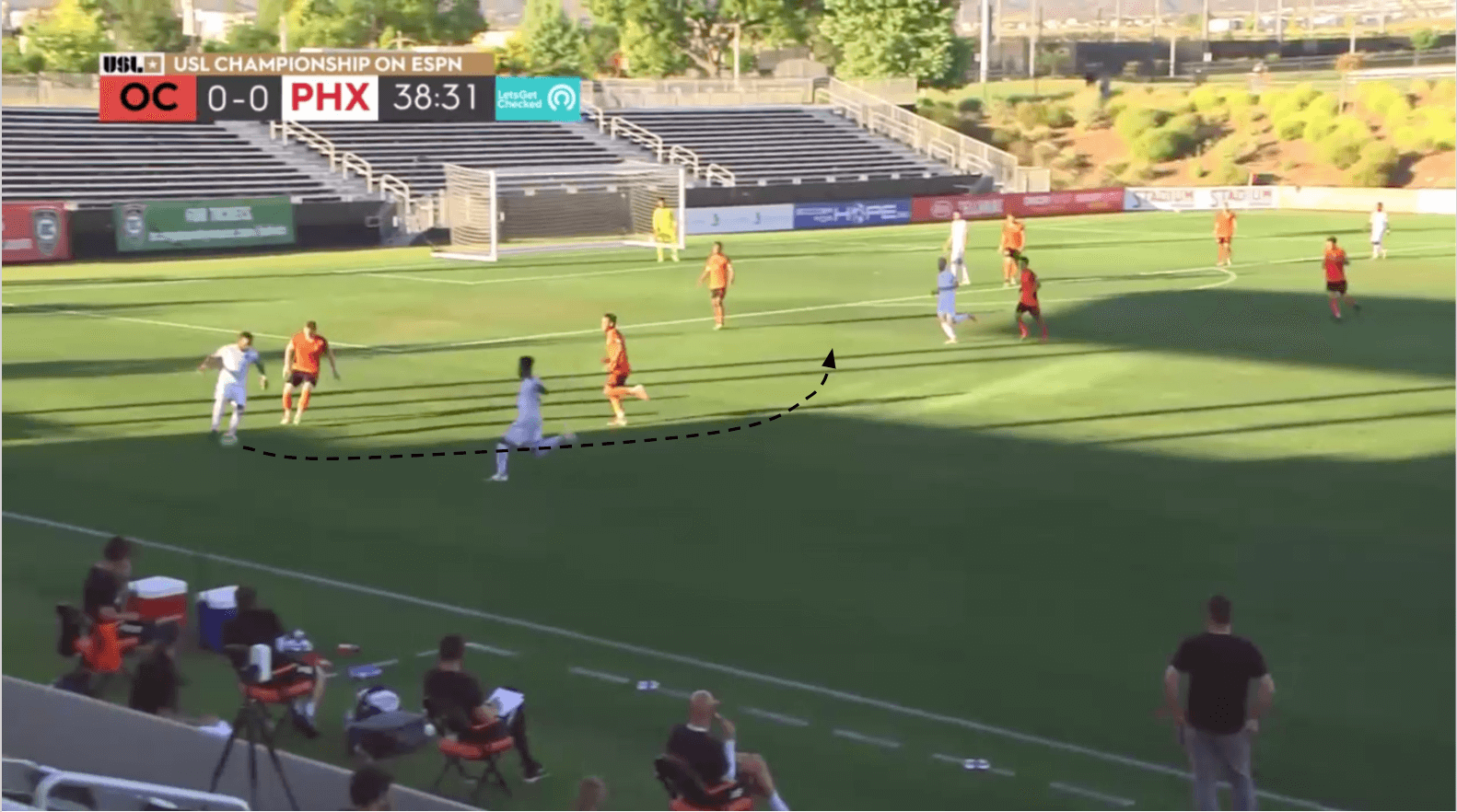 One of Flemmings’ go-to moves is to receive the ball on the left flank with his back to goal. When he does this, it’s usually because he is under pressure from a defender. Being naturally right-footed, Flemmings will take his first touch with his right foot towards the centre of the pitch. When this happens, he almost always creates enough space from the defender to be able to pass or shoot. Depending on how well the opponents have recovered, this movement can be quite effective — we often see Man City’s wingers do this in the EPL, as does Bayern Munich’s Serge Gnabry in the Bundesliga. This is effective when supported tactically; in the image above, Flemmings has very few options, and so he opted for a less-than-ideal shot from distance. 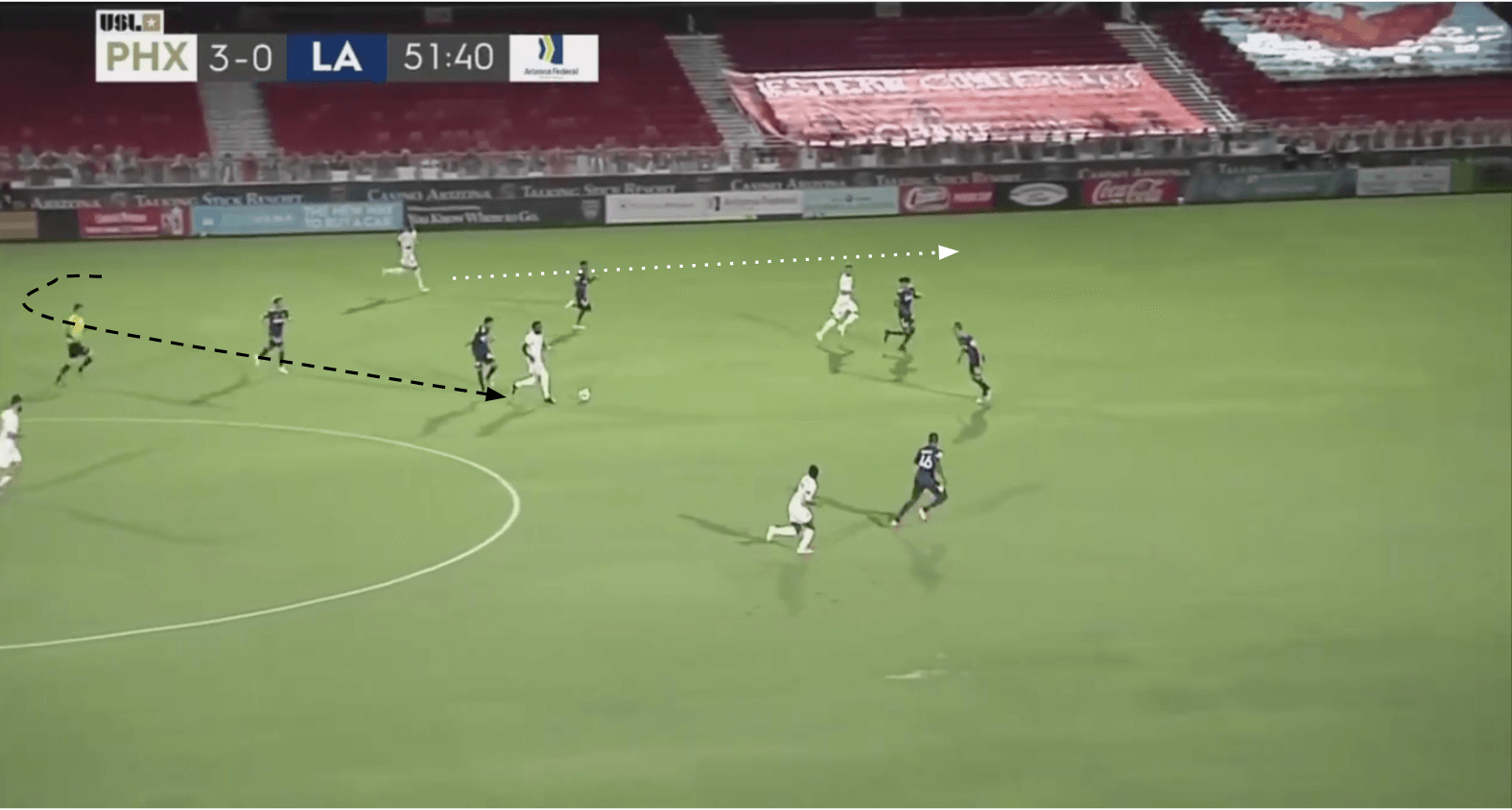 In the image above, another example of Flemmings’ willingness to turn and dribble is shown. Again, he was able to get into the centre of the pitch and beat defenders in the process. This causes central defenders to try and delay him as much as possible, knowing that eventually (likely when they get close to their own penalty area), they’ll need to make a decision. Because Flemmings does this so frequently, he would be better served if Rising could recognise these situations and adjust accordingly. If they’re going to stay compact (as they are above) this is a perfect opportunity for wide players (whether outside-backs or rotated players) to make runs out wide. This will open up passing lanes for Phoenix and give them more room for their players to operate in, likely leading to more goals.

While Flemmings is certainly talented, one of the ways in which he can improve is with more consistent decision-making, which is much easier said than done. Decision-making can be most improved when players are constantly scanning and understanding where they are located in relationship to their teammates, opponents, the ball, and available space. 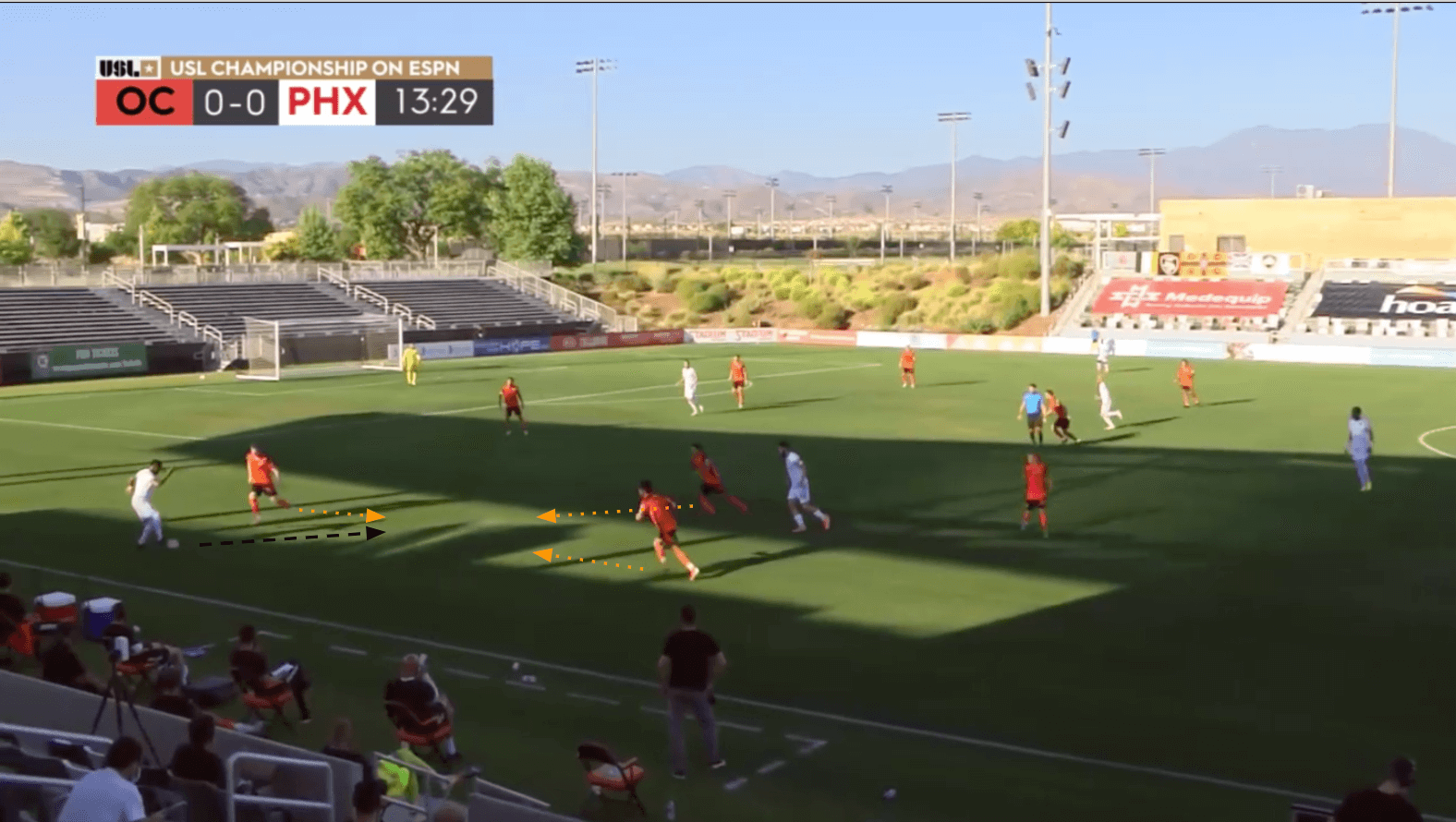 One example where Flemmings could improve this comes from the recent match against Orange County. In the image shown above, Flemmings just received a pass from the centre of the field. As it arrived, Flemmings received it with his front foot (right foot). This eliminates the opportunity for him to go past his defender with his first touch. If he tried to do so after receiving the ball, the defender would step in and win the ball. Instead, Flemmings tried to dribble out of pressure and ended up dribbling into three defenders, who easily won possession of the ball. The quick fix is for Flemmings to take one to two steps backwards to increase the distance the defender has to close him down, and then to make sure he can receive the ball with his left foot. If his defender’s run isn’t perfect, Flemmings can then go around him and attack all the space behind him. 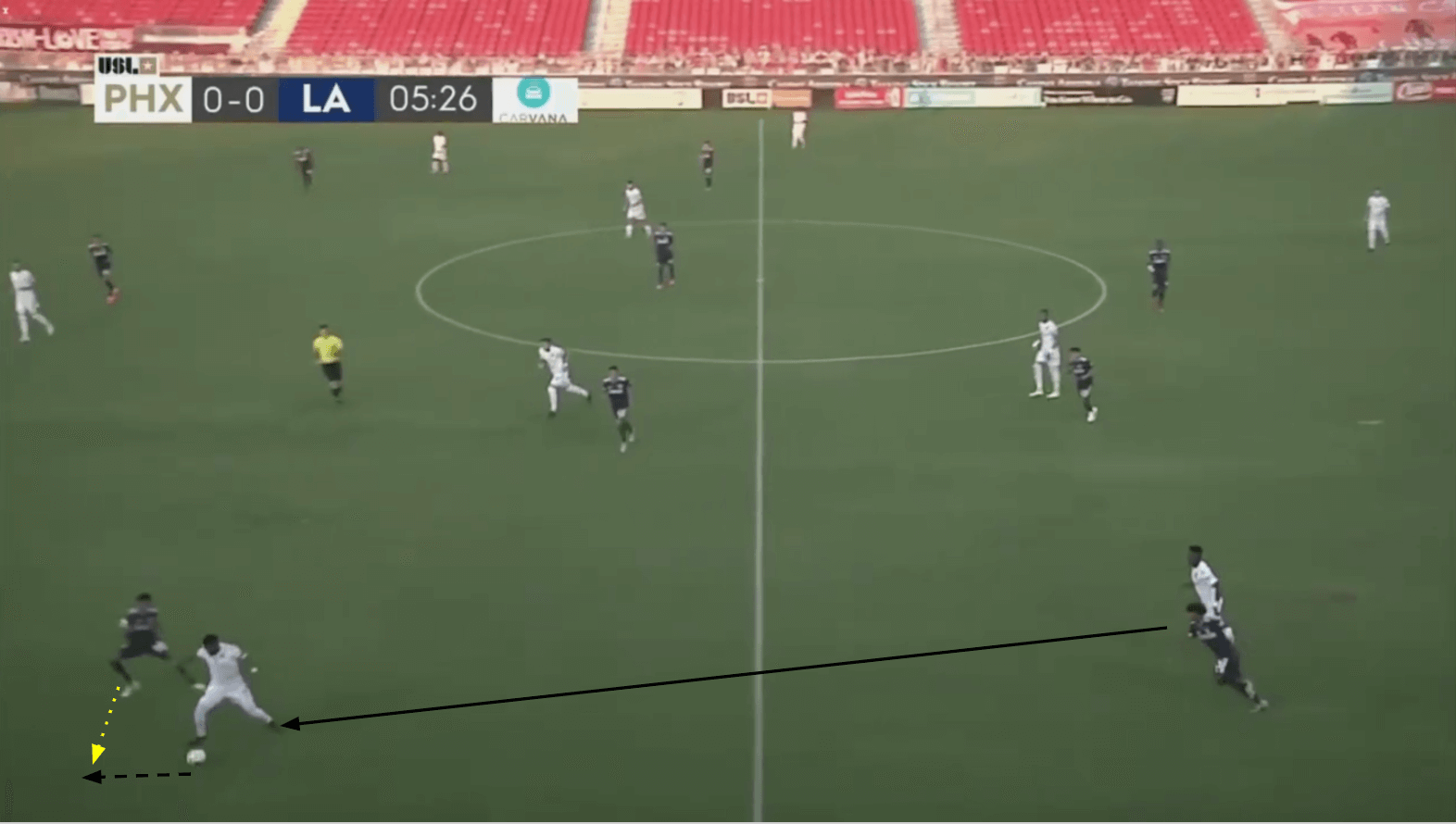 Another example of this is shown above from the match against LA. Flemmings was checking back to receive the ball from his left-back. Initially, Flemmings is too ‘vertical’ to receive a pass and turn. He needs to provide more of an angle for his teammate to play him the ball. In this instance, he would again be better served if he was closer to the touch-line and had an open body profile. If an attacker can see both the ball and his opposition when he receives the ball, he has an advantage over the defender. In this example, Flemmings was unable to see his defender; as soon as he tried to turn and dribble, his defender was able to pressure him and force him to lose possession.

The good news for Flemmings is that much of this can be fixed rather quickly with some small tweaks to where he positions himself in relation to his teammates and his opponents. If done properly, he will have even more opportunities to dribble at defenders with a larger advantage. This will certainly result in more opportunities for Phoenix, causing even larger headaches for any of their future opponents.

Flemmings is clearly a core part of Rising’s success. The 24-year-old has continued his contributions in the new season. Flemmings has featured both for the Rising as well as the Jamaican National Team, logging ten total appearances for the Reggae Boyz since making his debut in 2017. Six of those appearances have happened in the last calendar year, suggesting that as Flemmings continues to improve, so will his time with the National Team. If he can figure out some of his positioning issues and combine them with his innate talent, Flemmings can see a record season with Phoenix. With all these opportunities to continue to develop, don’t be surprised to see Flemmings in the MLS in the near future.